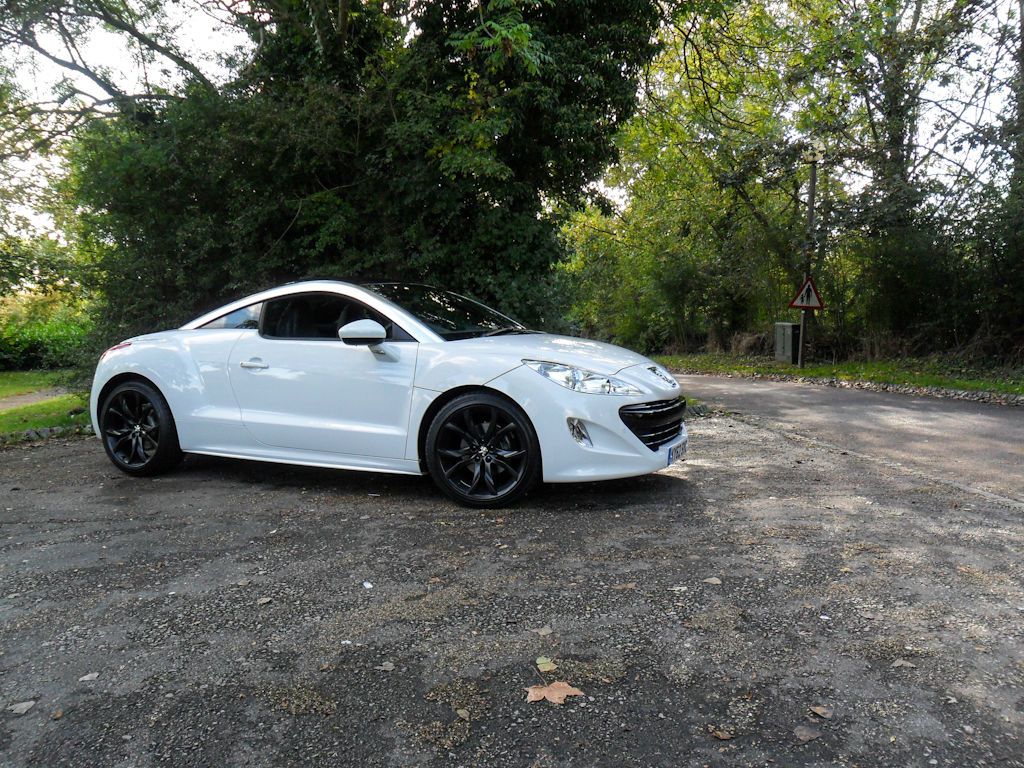 Yes, it’s true; if you want a car that gets looks absolutely everywhere, you need an RCZ. The common Audi TT has no attention drawing abilities anymore, they are ten a penny! 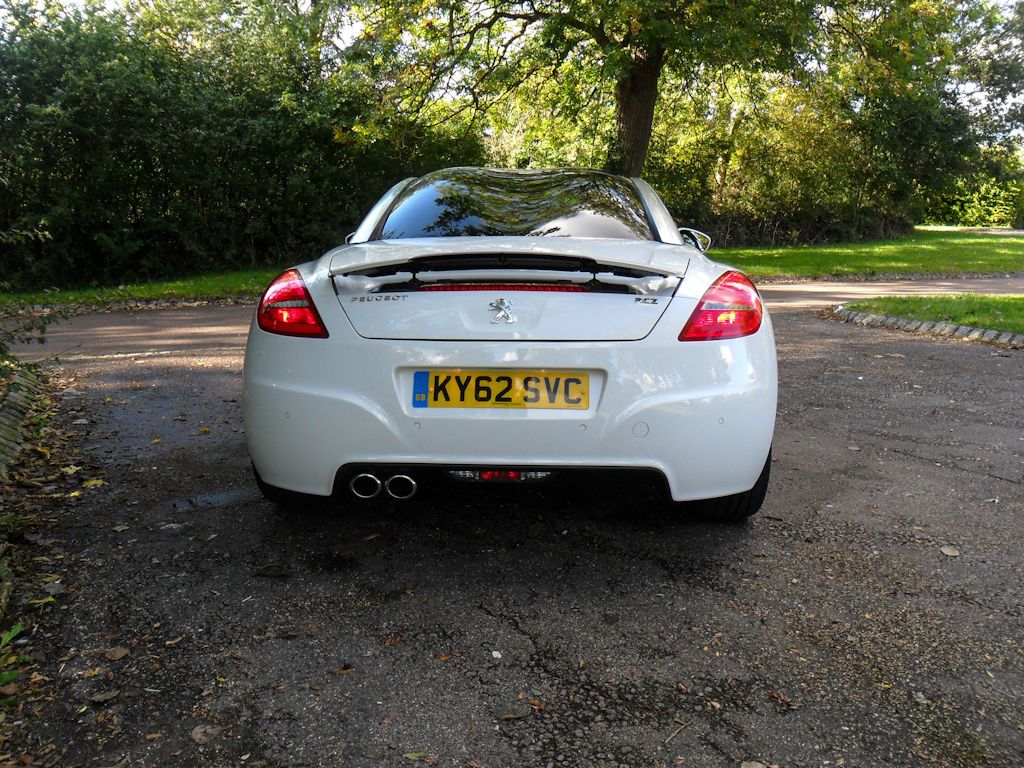 I think most will agree the exterior is stunning.

At any angle, you will see a sexy curve or a bulge, from the double bubble rear window to the sticky out nose, it looks the part!

This model had three extra options, black brake callipers, gloss black front grille and black alloy wheels. All of these came to a total of £480, but they made the RCZ stand out a lot more, especially against the lovely Opal white paint.

Since I originally saw the concept car at the last UK motor show in 2007, I thought it was such a sexy design. Some say its feminine, but I think the beefy rear haunches and wide front grille definitely make it a masculine car.

The way the aluminium finished roof arches emerge from the bodywork as though they are part of the chassis, it’s completely different to any other car on the market, in fact, the whole roof from front to back looks like its floating between the arches.

Oh and not forgetting the automatic rear spoiler, which you can put up at will, with its dedicated “poser” button next to the handbrake! 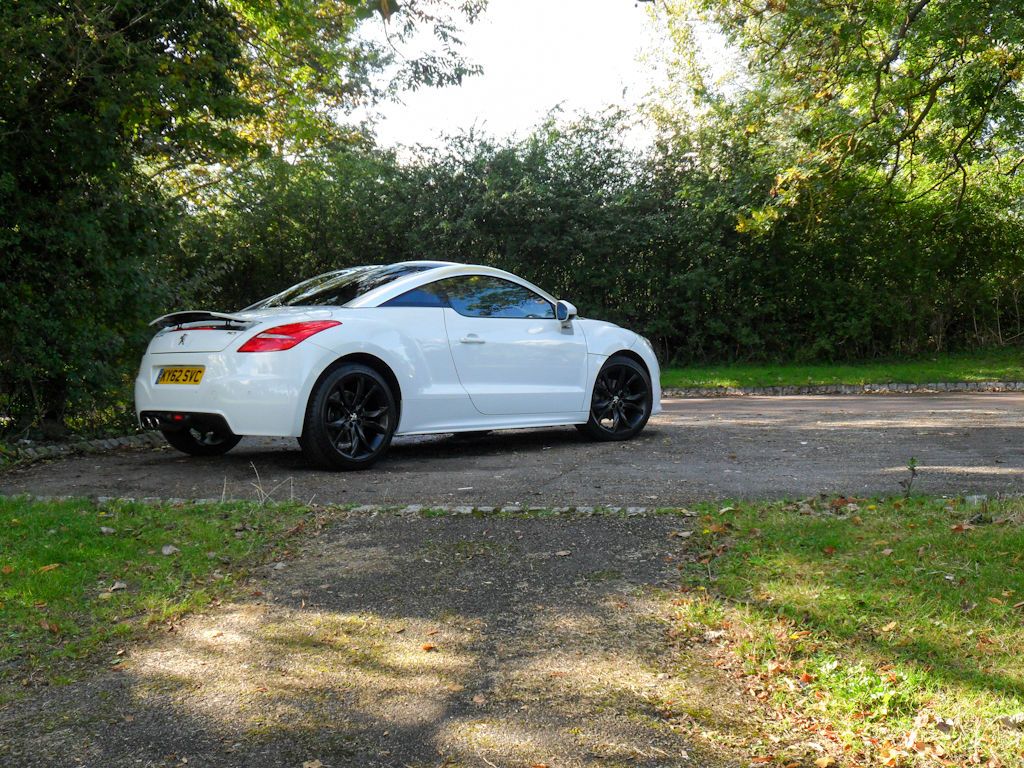 The front track has been stretched by 44mm at the front and 63mm at the rear; this gives the RCZ superb road holding ability.

The suspension is pretty firm as it should be in a sports coupé, you will feel the lumps and bumps in the road, and if you buy one, start avoiding potholes!

The electro-hydraulic steering adapts itself to weight up at speed, and become lighter during manoeuvres, while I didn’t get much road feeling through the wheel the drive still felt very sharp and engaging.

When pushing the RCZ into a corner and accelerating away it doesn’t struggle or scrabble for grip, it just pulls. This is partly due to the intelligent traction control that can enable more or less slip on the front wheels.

It gave me a lot of confidence both on country roads and normal city driving.

The one thing I would say is that the 156 BHP while quick enough for most people felt a little lacking.

When you put your foot down it seems to take a while to pick up and get going, if I were to buy an RCZ I would go for the 200BHP model. Just to have that little bit extra when you need it.

With a 0-60 of 8.3 seconds the 156BHP sits toward the slow end of the Hot Hatch market, however if you want an economical Sporty Coupé the 156 would be a good bet.

The diesel model would be better if you are driving many motorway miles and needed something to chug along in, but really, no sports coupé should be diesel, it just doesn’t sound right!

Peugeot markets the rear seats in the RCZ as “occasional” seats……this is code for “very occasionally if you are 5ft tall and don’t mind being squashed for a 10 minute journey”.

The car SHOULD have been a two seater, even with the front passenger seat fully forward, your knees are still underneath your chin, and the rear window means you cannot sit upright.

The rear seats are basically a bench with a 90◦ angle….just forget about them….it is a two seater! 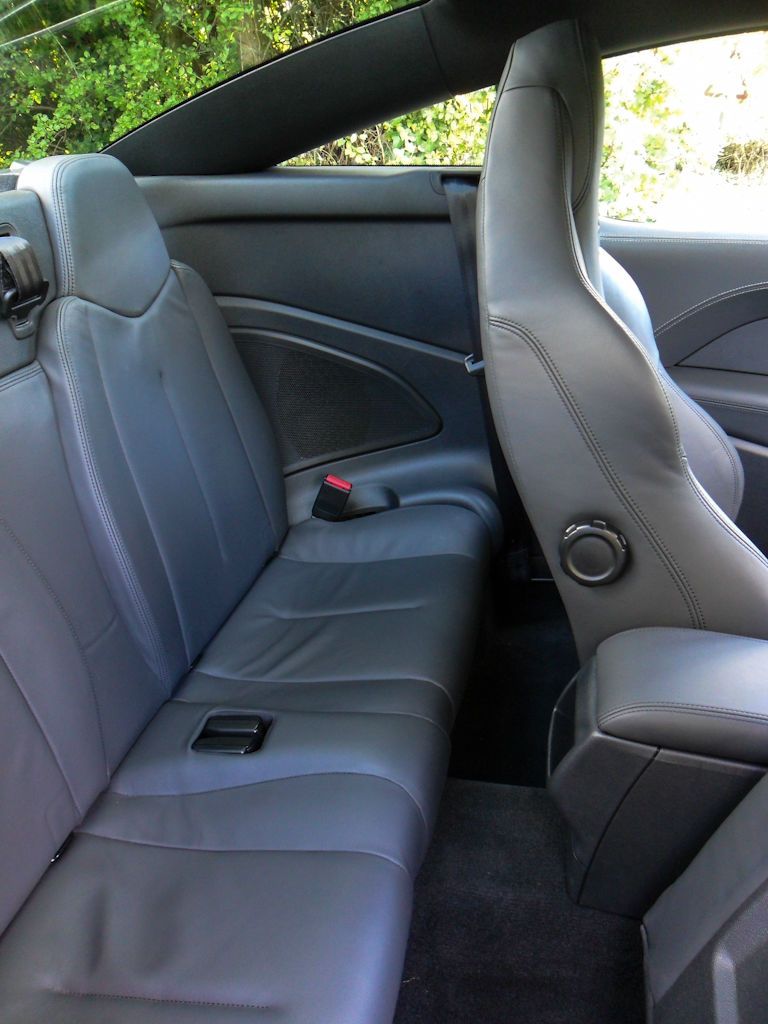 The rear interior isn’t very pleasant either, two great big plastic panels fill in the space next to the rear seats; the place where the seatbelts come from is just as bad.

Two holes with seatbelts emerging from them, the latches then sit in another cut out. It takes away from the premium feel of the car and is a tad disappointing. 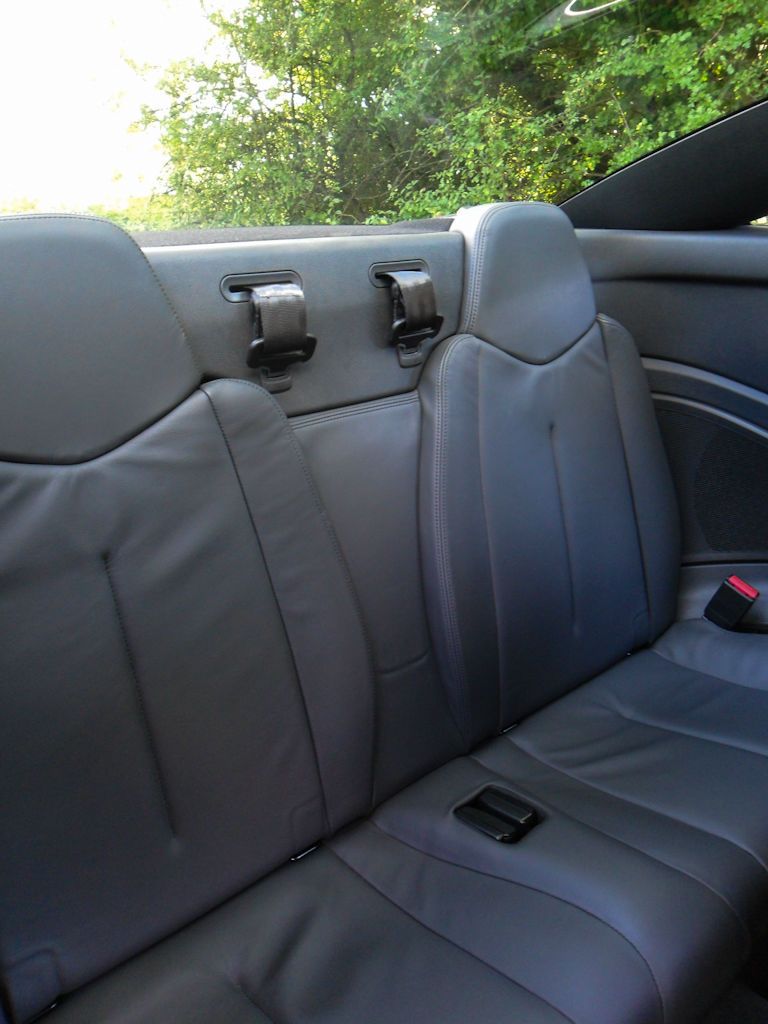 Underneath the sexy rear spoiler lies a huge boot, easily big enough to fit 2 large suitcases for that romantic weekend away to Français! 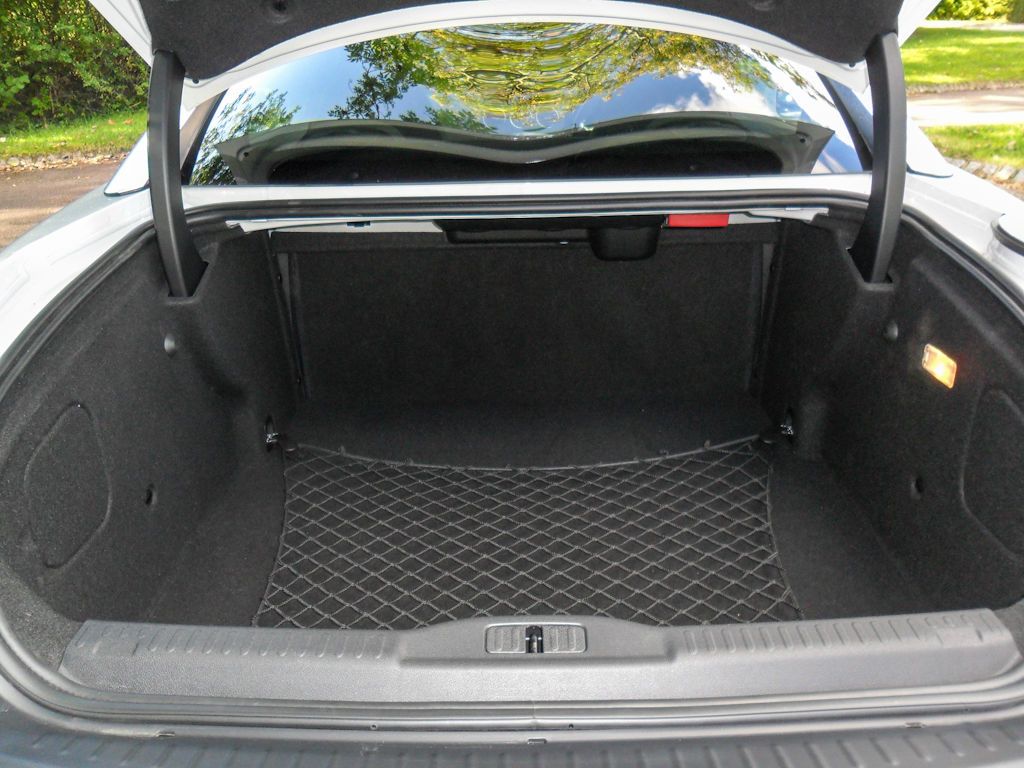 However up front it is another story, the black roof lining and the stitched dash look great.

To add to the classy feel, a large analogue clock sits in the middle of the dash.

The climate control and stereo are surrounded by a gloss black facia that has a slight silver fleck to it, however unusually this doesn’t carry on anywhere else on the car. The surround for the gearstick is normal matte plastic and so is the insert by the armrest. The armrest moves forward, and also adjusts upward which was a nice feature to have. 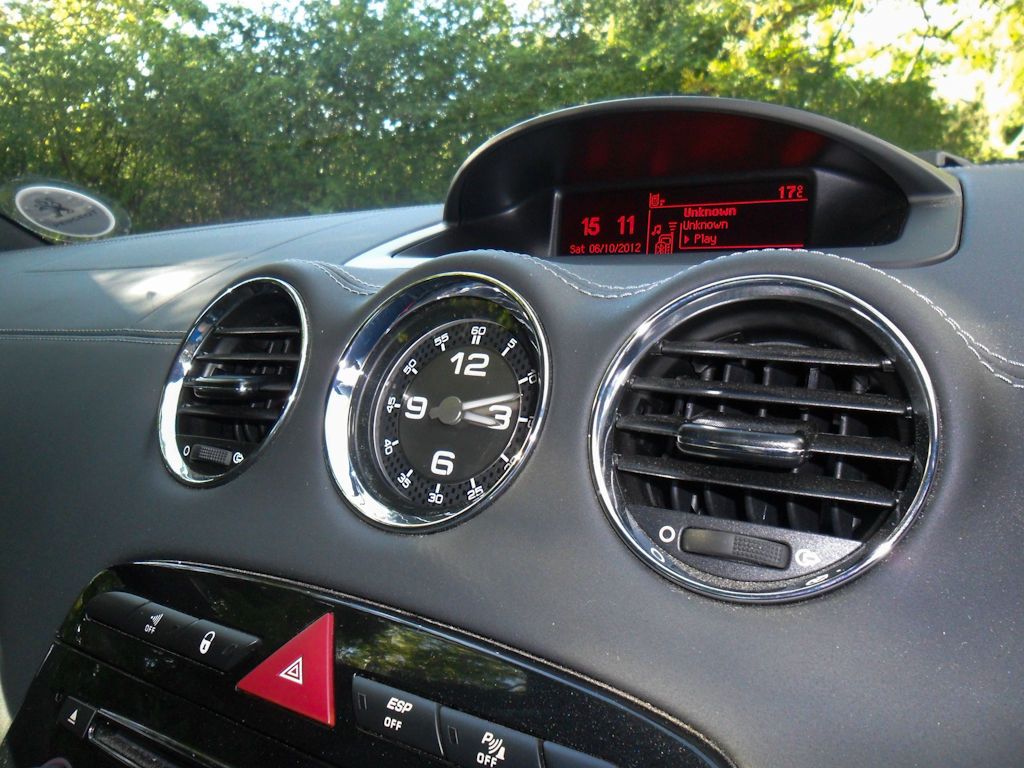 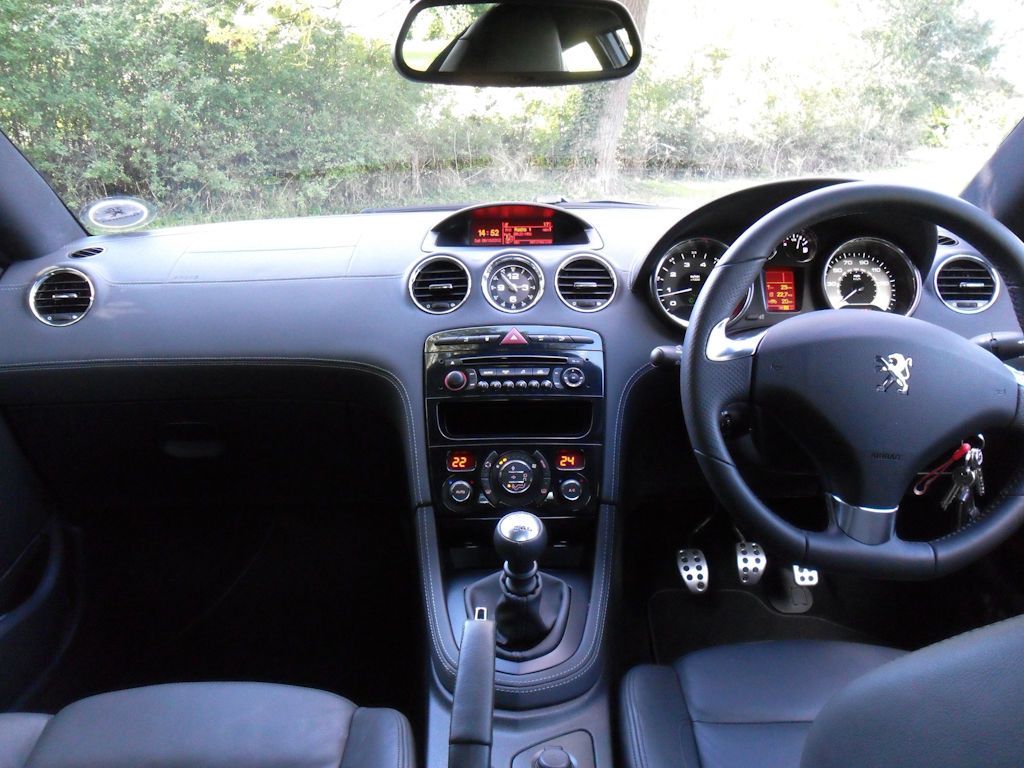 The main display for the radio is also a bit of a disappointment, it’s the same screen used in the 207 and a few other Peugeots.

A colour touch screen as standard would have been more fitting.

Neither keyless entry, nor push button start is to be found on the options list.

It is a shame as I think the car feels more basic than premium due to the lack of tech. The standard stereo was great, it had real bass and was nice and crisp; Bluetooth audio streaming was also flawless.

Up front the seats were excellent, firm and hugging, just what a car like this needs. One rather annoying thing I found was that when the blowers were on the foot well, a loud whistling sound appeared, it didn’t happen on any other setting, just the foot well; but it sounded like you were in a haunted castle…. 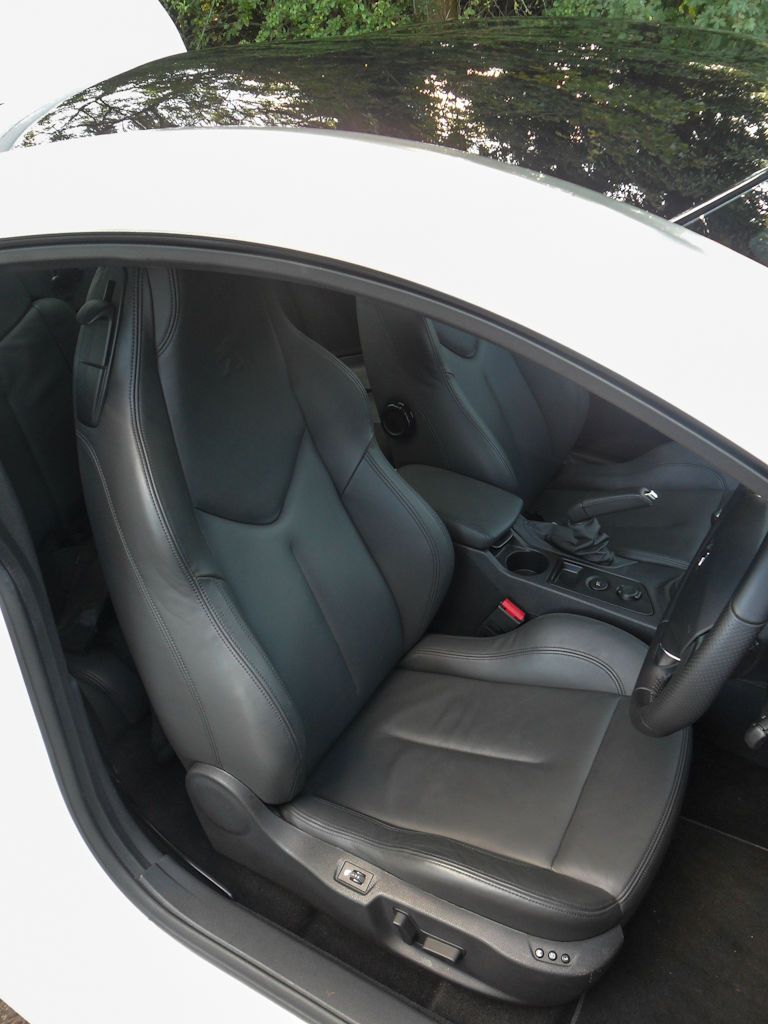 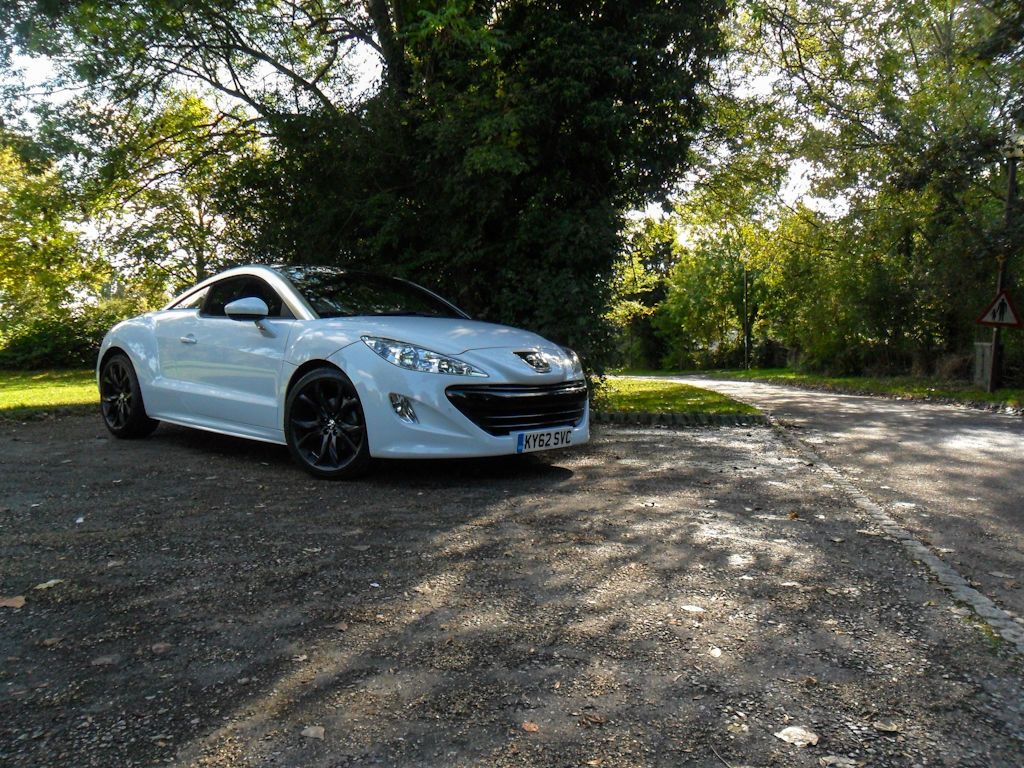 All in all the RCZ is stunning, if you want a car that everyone will look at then this is it.

The amount of attention you get driving around is very flattering!

Some more tech inside would be nice, but at the end of the day they are all things you can live without.

The engine to go for if you want a true Sporty Coupé would be the 200BHP version….or if you can wait, Peugeot are bringing out a 260BHP Racing model in 2013! This will be Peugeots most powerful road going production car.

GT spec adds leather heated seats, 19” alloys, automatic lights/wipers and front parking sensors, but to be honest if you can live without the leather seats get the basic sport spec and opt for the Sat Nav; at £1,470 it’s not cheap but it will finish off the interior nicely!

You could also add the Sport Kit with includes a smaller steering wheel and sports gear lever for £320.

If you were thinking of splashing out on a basic spec Audi TT at £24,075 I would advise you to go to Peugeot first.

Even though the TT has a beefier 2 litre engine and better 0-60 than the base RCZ, for exclusivity and a drop-dead gorgeous exterior, the RCZ outclasses the TT! 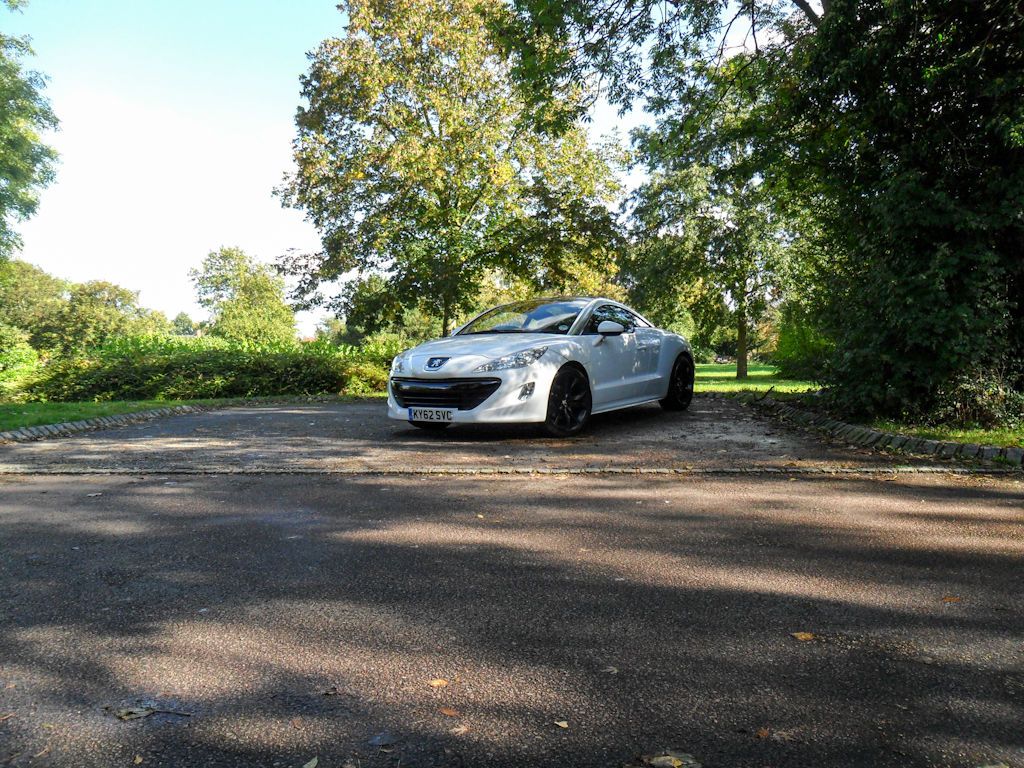