Peugeot are back with a family sized hot hatch. The last time this happened it was 1997 and the 306 GTi-6 would hit 60 from a standstill in 8.5 seconds. Oh how times have changed.

This latest performance 30X model has had the 270 BHP RCZ R engine shoehorned into it. From just a 1.6 litre turbo lump it makes 330 Nm and will shift from 0-60 in 5.8 seconds. So the digits have been reversed in comparison to its grandfather. 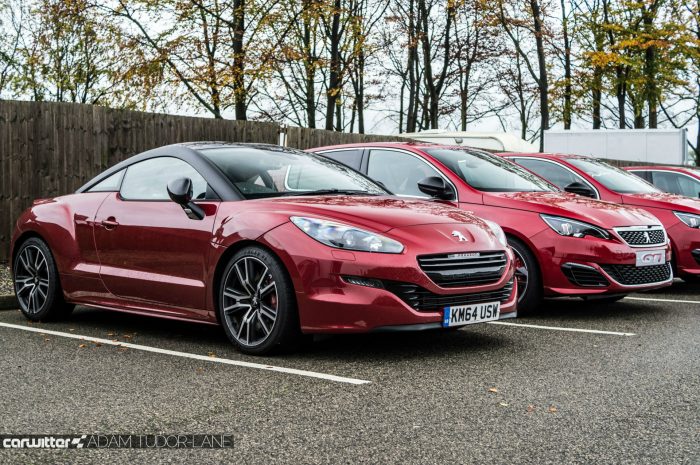 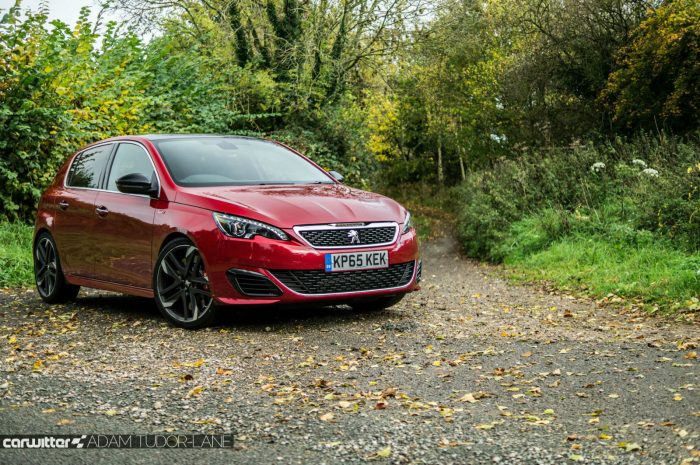 Comparing the 308 with some of the current hot hatch crop its looks can be summed up in one word. Subtle.

You won’t find any huge wings, cut out wheel arches or garish flares on this lion. In fact, apart from larger alloys, low skirts and a rear diffuser it’s hard to tell it apart from the GT Line models.

It’s a good and bad thing, it doesn’t stand out from the crowd. But it’s more in keeping with the performance family hatch vibes. Whether it appeals en masse to that market is another matter. 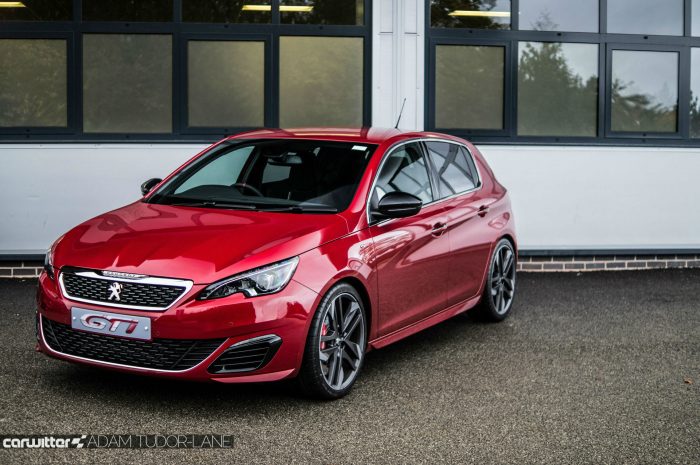 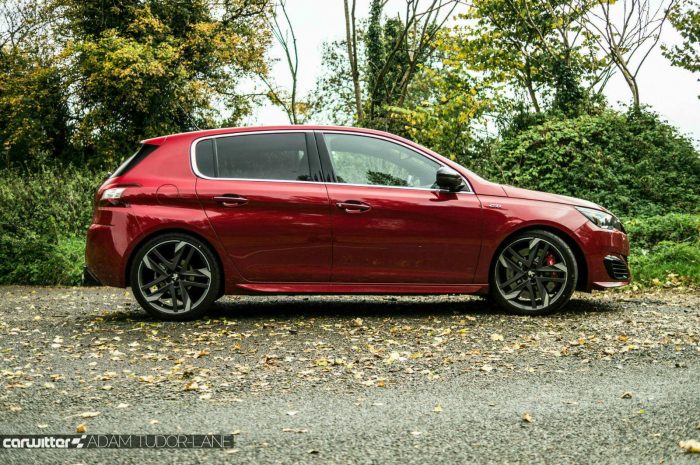 We first drove the 308 GTi on it’s launch in late 2015. But we weren’t impressed. Yes we got to drive it on track but you can never really gauge a cars on road performance in that environment. The road driving was spent pottering through small villages and sitting in traffic. So we held off reviewing it to give it a fair crack. 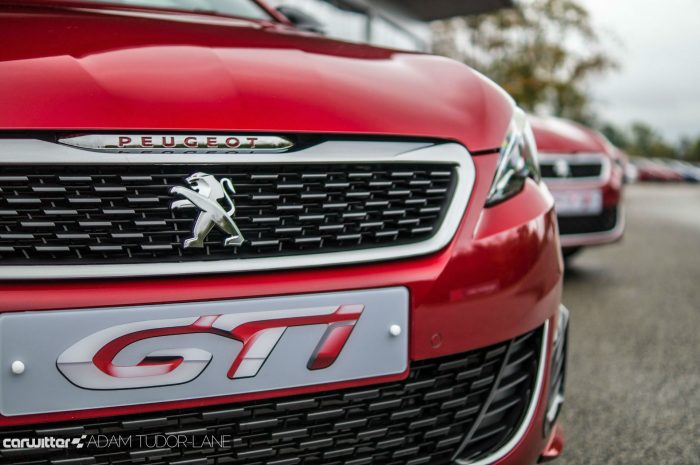 This thing is blisteringly quick. You don’t notice the speed at all, which can be pretty dangerous. When you’re on top of a corner you look down and realise you are entering it 30 MPH too quick. But it just feels so stable at speed.

Acceleration is effortless in nearly all gears, however setting off from first can seem to bog down a little on occasion, and you rapidly have to shift up into second. It’s like a crawler gear if anything.

Braking is rapid, thankfully. This is down to the 380mm 4 piston calipers sourced from UK company Alcon. They sit beneath lighter weight 19” alloys. 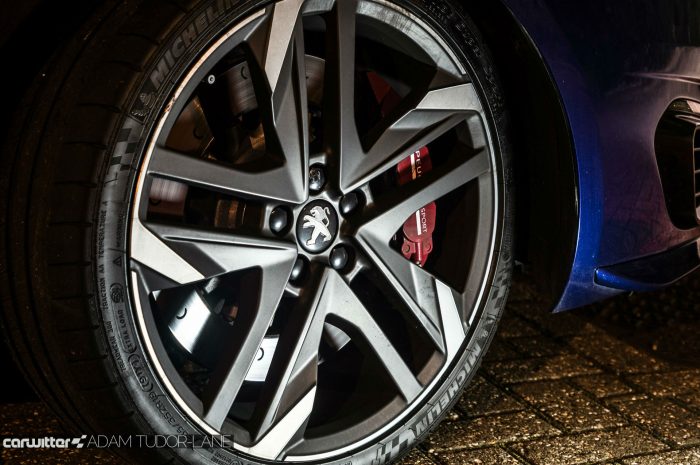 Handling is precise and darty in nature, turn in remains flat with a small amount of lift off oversteer if you really cock it up. But even with a Torsen limited slip diff this lion will really understeer when pushed which is a massive shame, and something the Type-R is much better at overcoming.

Under general use the limited slip diff is sublime, it just finds the traction without jarring the wheel away from your hands. You can hear it spinning up when you really push it hard, but there is minimal torque steer which is nice.

Ride is stiff as you would expect, you can feel potholes and imperfections through the chassis but it is by no means harsh. Cornering stays very flat, whilst the whole car feels very rigid and together…just like a Golf.

Steering is nice enough, although the lack of any real feel or crispness could be improved, the gearbox is good enough but doesn’t really have an engaging feel like the Civic Type R does. The gear knob should be much stubbier with a far shorter throw to really get a drivers feel to the car. 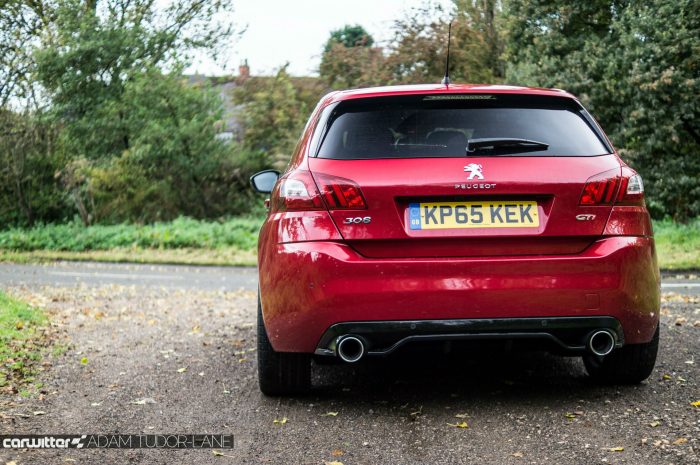 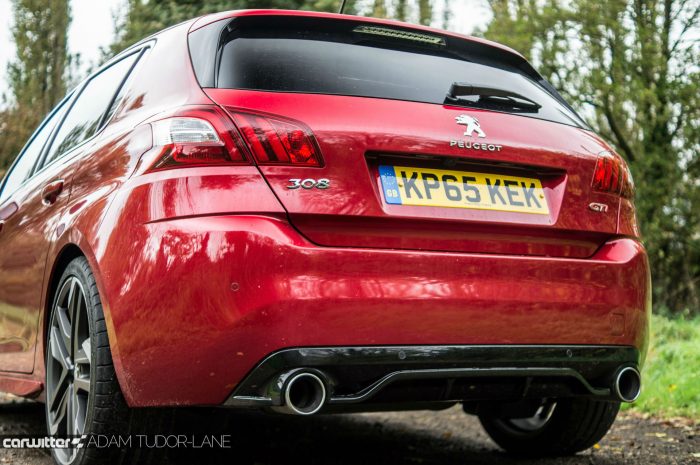 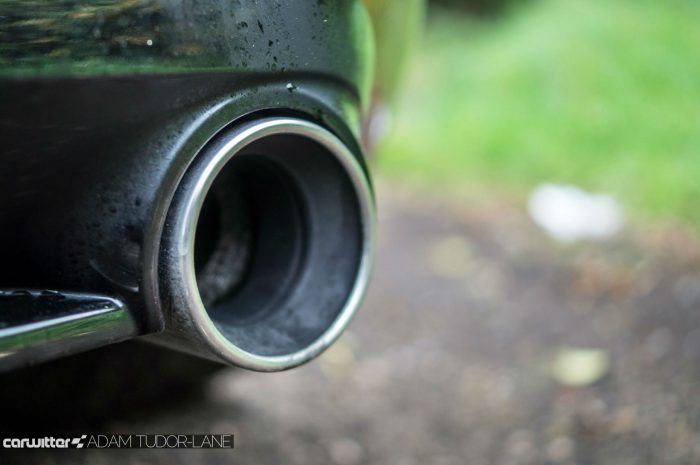 After hammering around a section of Donington for a few laps the cars came in with smoking, pinging brake discs but after a few minutes of cool down they were back out with exactly the same pedal feel. Very impressive. 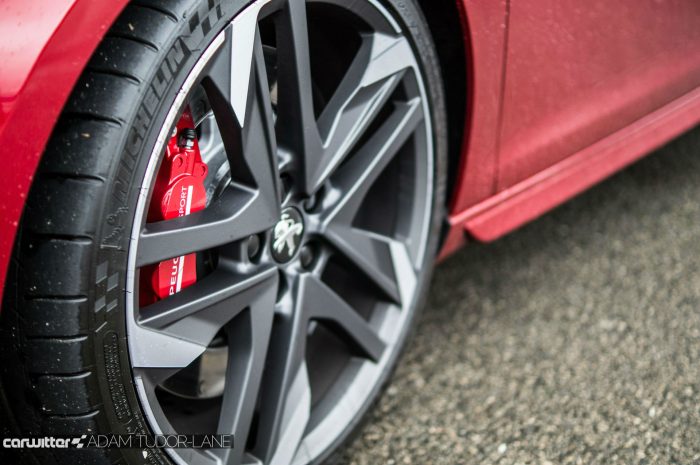 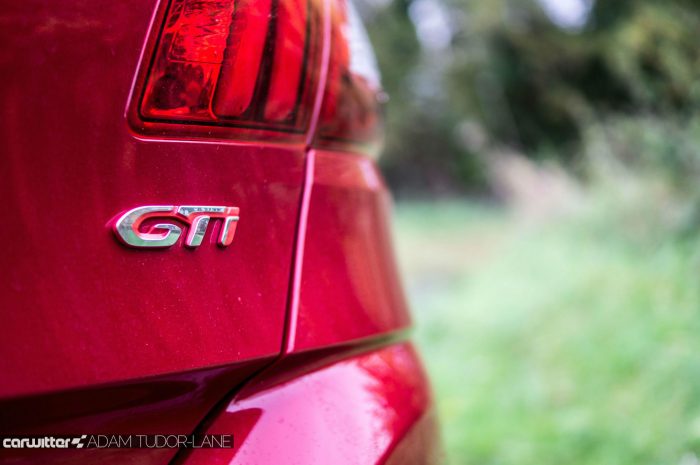 Once inside you get some smart sport seats up front, they are a similar design to that found in the 208 GTi but mixed with some of the more modern tweaks of the RCZ R’s. They fit nice enough, but aren’t a patch on the deep, solid Civic Type R jobbies.

You also get a red 12 o’clock band, alloy pedals a sportier gear knob and suede door trims. Apart from that it’s standard fair. 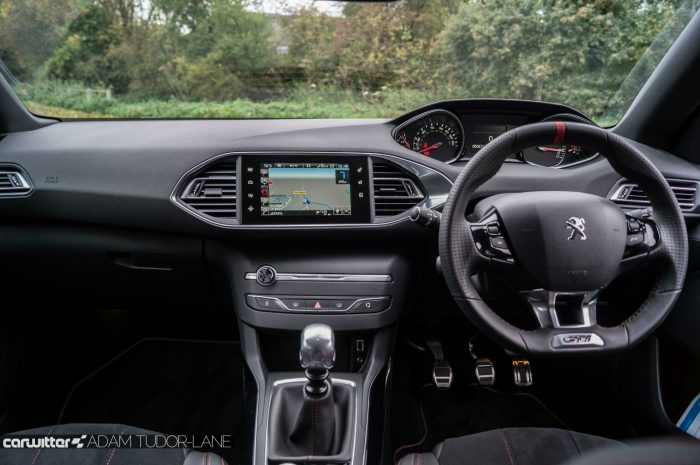 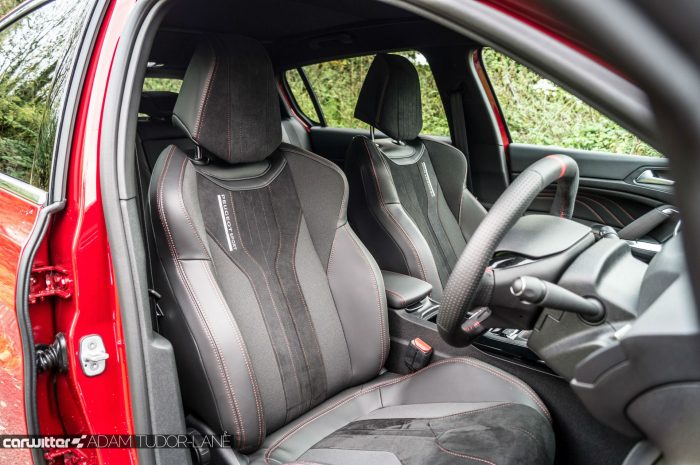 Peugeot have made a damn good go at the 308 GTi, and thank god they gave the car to Peugeot Sport from the off.

Peugeot were very quick to reinforce that this isn’t badged R so don’t compare it to other R monickered vehicles. But it’s very hard not to when it sits so far above comparative GTi badged counterparts.

You could certainly live with the 308 GTi every day. It’s quite understated in its design, a bit of a sleeper. But it packs more power than the Golf GTi, the only thing is £28k is a lot of money for a Peugeot.

I can’t help but think if they had aimed it at the £25k price bracket it would trounce the lower league competition rather than struggling to bring the fight to the bigger boys. 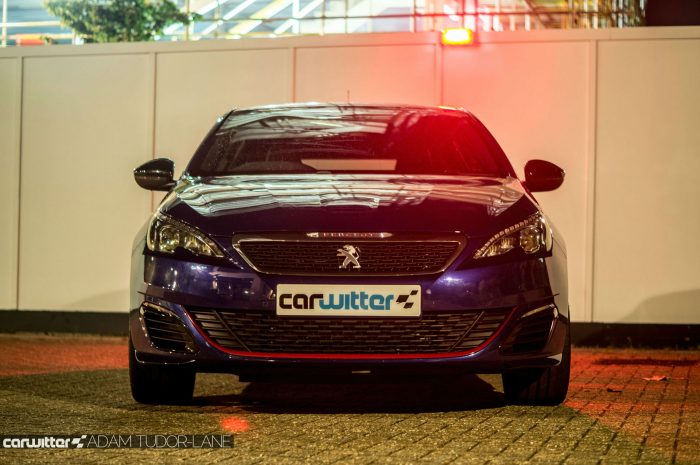 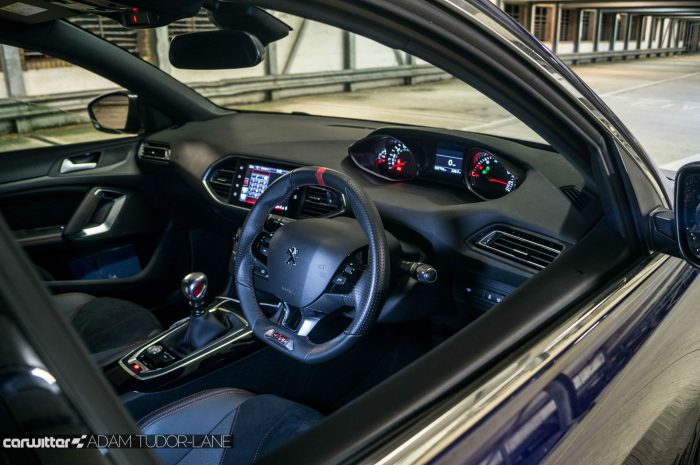 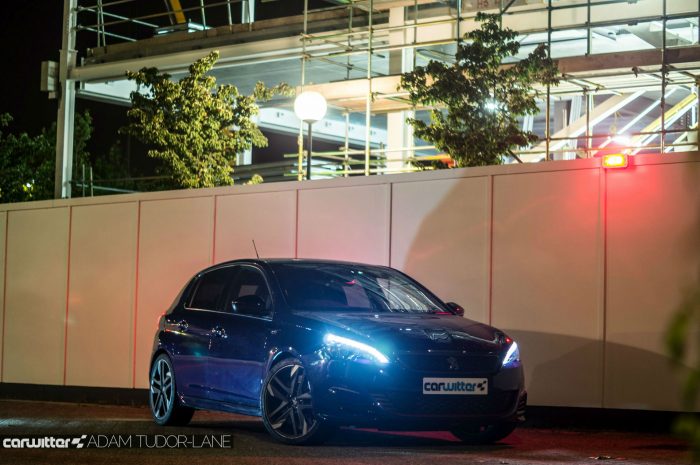