We heard direct from Renault this week during a PR briefing on the new ZOE EV, that if you fall behind with your monthly battery lease payment, they can actually switch the battery off remotely; by stopping it from charging. It took a bit of pushing to get them to answer this, no doubt its […]

Allan Simonsen: What should be a Le Mans 2013 review

Image Copyright of – motorsport.com The memories of the 2013 Le Mans 24 hours will be with us for all the wrong reasons, much like the Malaysian MotoGP in 2011, or the Las Vegas Indy Car race that following week. Less than 10 minuets after the start of the 24hr Simonsen was seen hitting a […]

A damp weekend at the North Yorkshire circuit marked the halfway point of the 2013 season. However the weather, or the fact that a very long, famous (albeit tragic this year) race was taking part in North Western France could keep the fans from more tin top  BTCC action. Saturdays qualifying session saw (after many […]

Renault have announced a new Twizy! By removing the pretty useless rear seat, they have now made a Cargo Twizy! Specs: 180 litre / 75 kg boot space Lockable rear door You can now customise your Twizy too with “Design Your Own Twizy” 43 colours and 30 pre designed wraps £650 cheaper than the standard […]

Mazda launched its new 6 series toward the end of last year, aimed to compete directly with the likes of BMW, VW and Audi. We tested the 2.2 Diesel in top of the range Sport Nav spec. With 173 BHP and a 0-62 time of 7.9 seconds you’d think emissions would be pretty high. But […]

Nissan have announced a Zero emission Le Mans racer for next year. Based around the 2012 Delta Wing car (this time with a roof though), the ZEROD RC car will achieve speeds of 300km/h. Nissan will be testing a range of electric drivetrains before the 2014 Le Mans, they may even be able to qualify […] 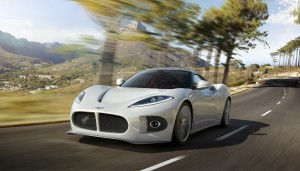 Spyker B6 Venator at Salon Privé

Spyker are to return to Salon Privé this year with the now production confirmed B6 Venator, and the C8 Aileron. Salon Privé’s David Bagley said: “I’m delighted to have Spyker at Salon Privé once again and showing a stunning line-up on both the Concept Lawn and as part of the  Audemars Piguet British Super Car […]