Can you believe it, the Civic is now in its tenth, yes tenth iteration? This all new 2017 Honda Civic hatchback is longer, wider and lower than the last generation it’s gone from a family hatch, to more a family saloon in its looks.

Torsional rigidity is up by 41% over the old model and the power steering system was in development for seven years. You can spec active dampers on the very highest trim grade and the whole car is 16KG lighter than the outgoing Civic. The windscreen is 4.6 mm thick, comprised of multiple materials to deaden wind noise…by all accounts the new Civic is a tour de force in ground up reengineering. But is it?

We headed to Barcleona to see if this new Civic lives up to the press pack hype. 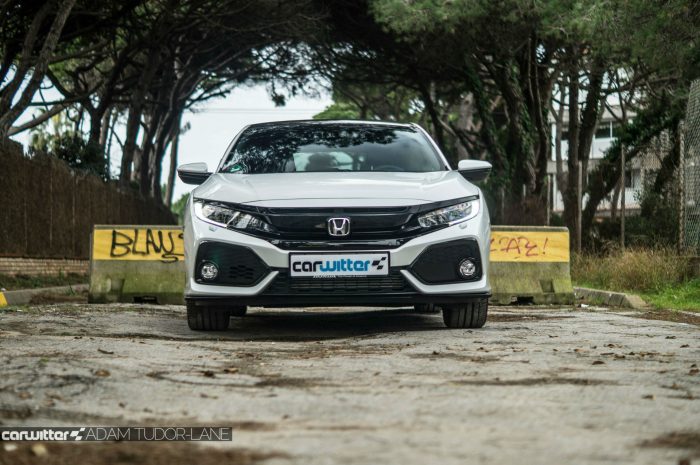 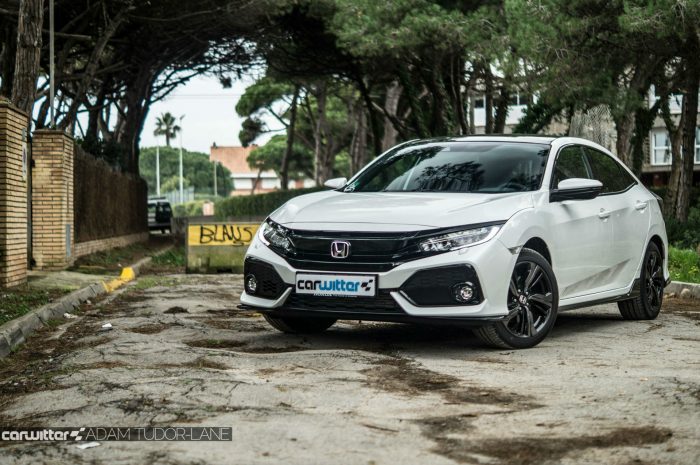 After seeing this ‘all new’ Civic in Geneva last year we weren’t sure…it looks American. With styling very similar to the new NSX, it doesn’t look quite right for UK roads. For a start it’s much longer than any Civic hatch before, as mentioned in the intro it looks like a sedan more than a hatchback.

It was actually designed in Japan, although when questioned, Honda admitted their design language is heading more toward the US than Europe. 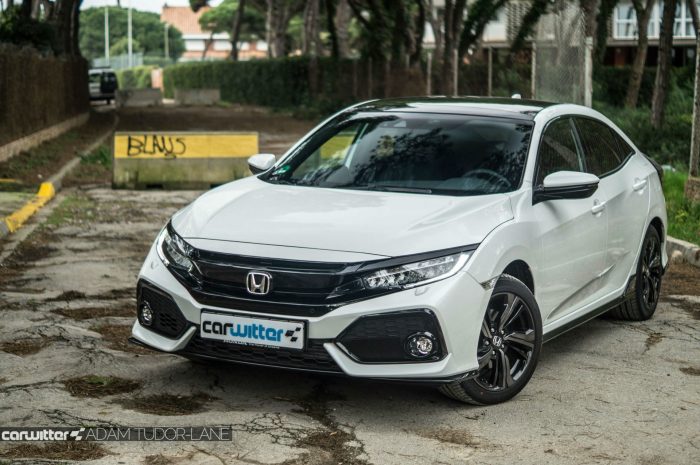 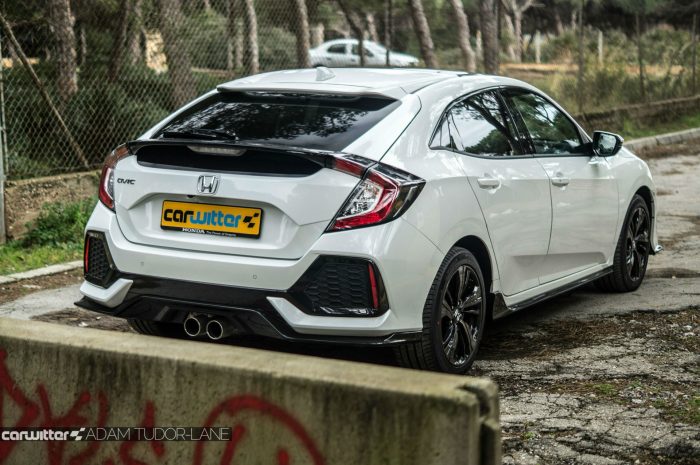 …and after seeing it in the flesh…we’re still not keen. It’s a nice enough, modern, angular design…yet it’s all a bit elongated and slopey.

Angles and slopes worked fine on the shorter, more stout ninth gen, however to us the new Civic just looks a bit disjointed.

Like a cut and shut of three different cars. 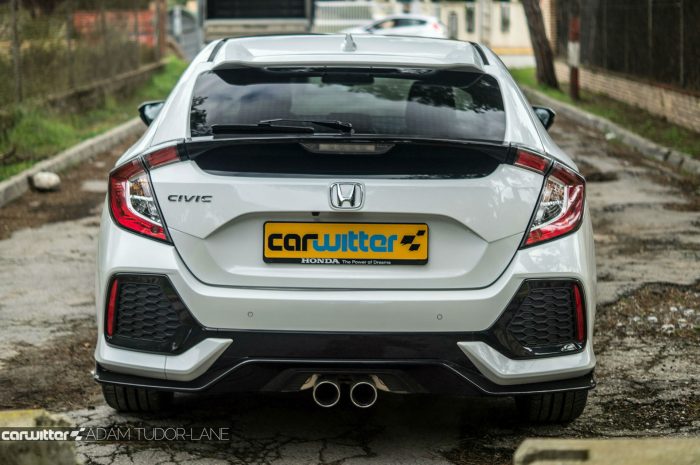 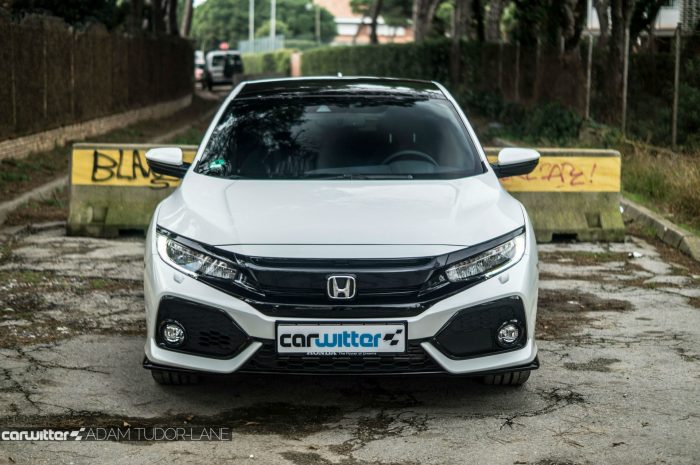 Starting off at £18,335 for a 1.0 litre turbo in SE trim, that’s roughly in line with its competitors like the Golf and Focus, but their entry level kit is rather less generous than Honda’s. So it’s worth forking out an extra few hundred quid for the Civic.

Honda’s highly lauded 1.6 i-DTEC diesel isn’t present at launch, it will be making the line-up at some point in the future though.

You’re left with either a 1.0 litre three cylinder VTEC or a 1.5 litre VTEC. Both are turbo’d, the latter doesn’t have the high lift cam, so it’s not full VTEC, but carries the name anyway. 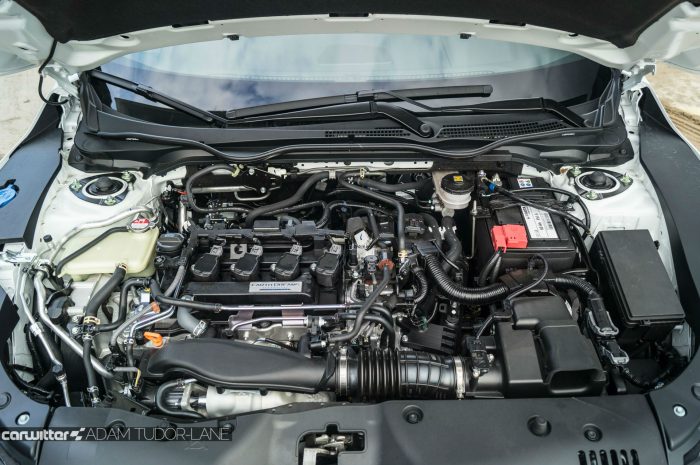 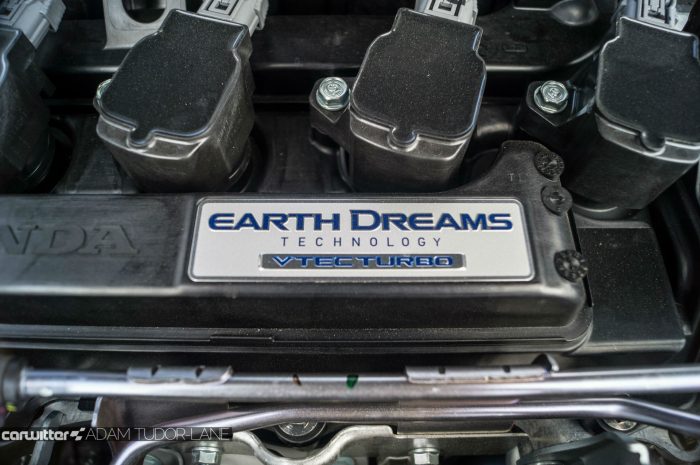 The only auto box on offer is a CVT, on the manual front there’s a rather slick six speed ‘box in place.

For us the 1.5 litre turbo is the pick of the range, it’s warm hatch territory and, actually has more power than the EP3 Type R.

You still have to work it in the midrange though, this isn’t your lazy type of, ‘let the torque build’ turbo setup. Throwing it round some mountain roads we were changing up and down from third to second along the way, it’s no biggie and the slick six speed gearbox has a nice short throw to it. 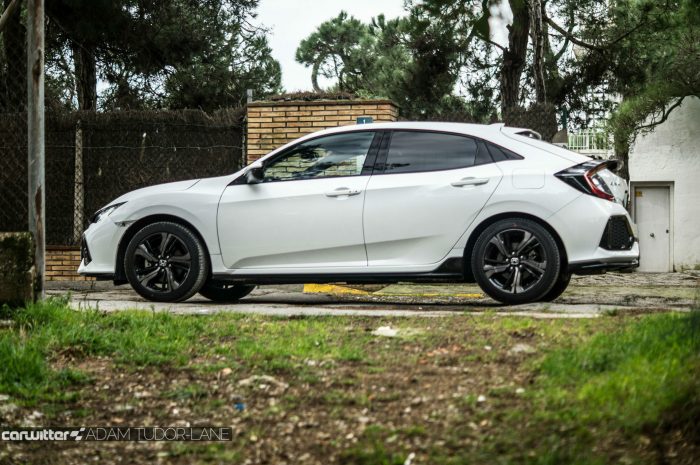 If you opt for a CVT you will be penalised 20 Nm in the torque department, purely down to what the gearbox can handle and no doubt its longevity.

Turn in is nice and sharp, the rack setup is very similar to that of the Type R, and yet there’s still a sense of disconnection due to the light weighting on initial input. 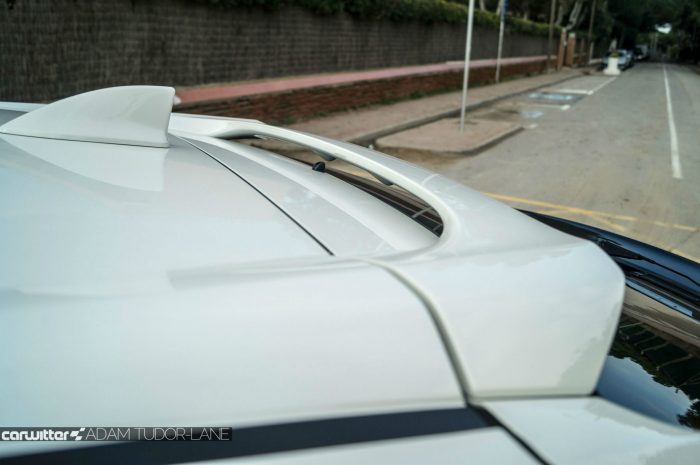 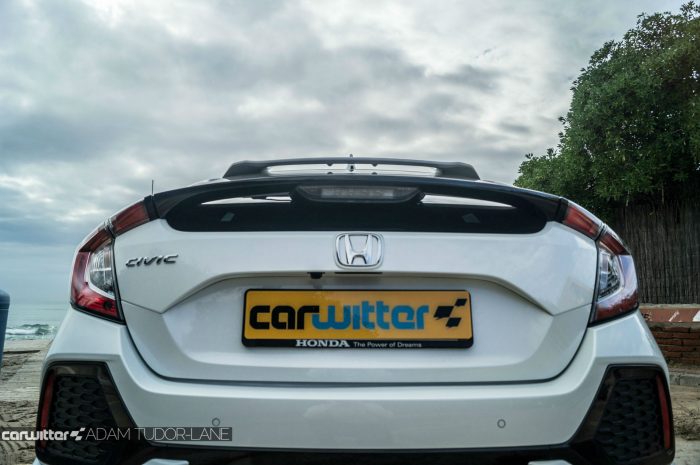 We didn’t get a huge chance to put the new Civic through its paces on a dynamic, handling front.

However from the short number of challenging roads we did drive on, we can tell you that it stays nicely balanced through the corners. When pushed a little bit more – in a spirited way – it will start to understeer as the weight shifts to the front.

That new multi link rear setup gives the car a stable feel when you lift off the throttle mid corner, partly down to the forward weight bias that’s shifted slightly, as Honda have moved the fuel tank from under the front seats to the rear.

Higher spec 1.5 litre models can add the dynamic dampers found on the Type R and the Civic Tourer. They stiffen up to help stop bump, when switching them on and off through various corners there was no massive difference in feel.

On stretches of undulating motorway switching them on did help dampen some of those peaks and troughs, it’s nowhere near as noticeable as the trick magnetic dampers found in JLR products. 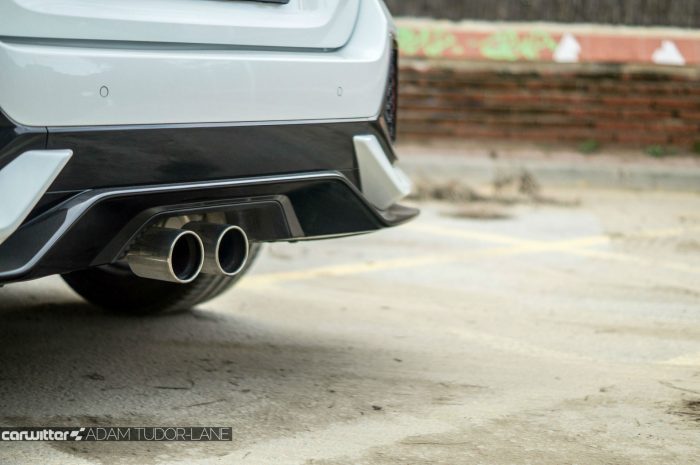 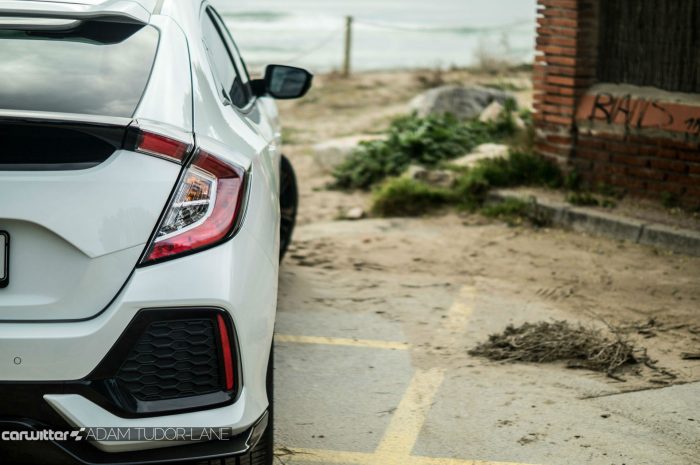 If you decide to opt for the 1.0 litre it’s ample for around town, perfectly punchy enough with its 127 BHP. Mated to the CVT things get a little loud, but Honda have really done wonders with that ‘box.

It feels far more like a normal auto than a noisy, slow CVT. Don’t be put off by it.

Road and wind noise was minimal, even above strictly legal speeds. It was noticeably quieter than the majority of hatches in this realm, just don’t come in expecting padded cell levels of silence. 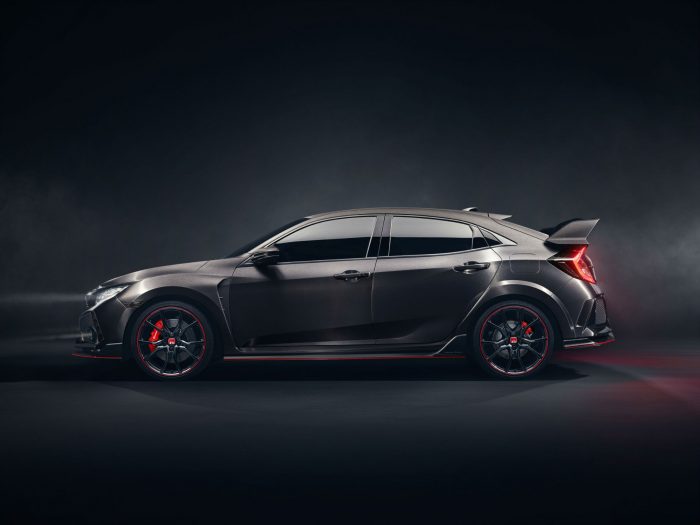 If you’re wondering about the fire breathing Type R, well you’ll have to wait around six months until the Type R is officially released with specs.

And no, it won’t be a CVT only…some outlets wrongly reported this a few months back. Clearly a ridiculous claim.

Thankfully, Honda have completely ditched the previous two gens layout. It was a bit of a mess…a mish mash of screens, fonts and sizes.

Now there’s a simple, horizontal layout across the whole dash. 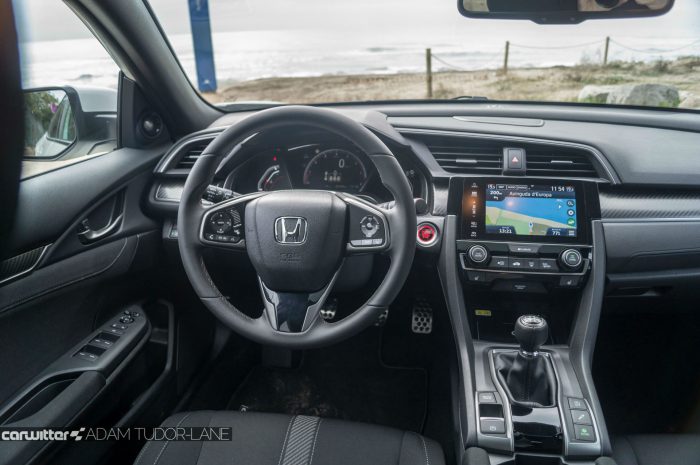 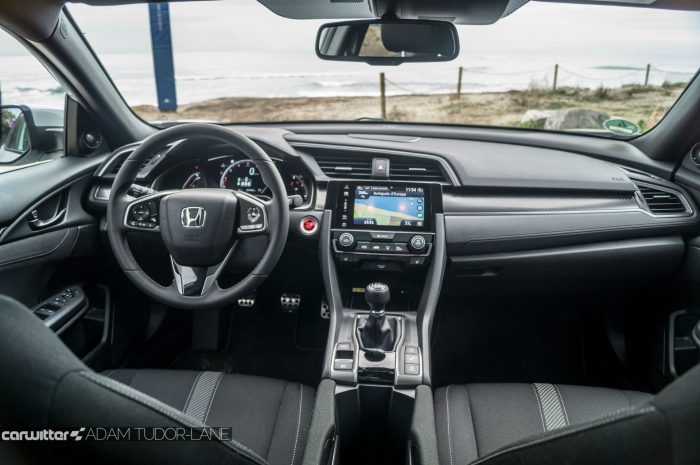 The driver gets a three-dial segmented setup, with the main dial being full LCD, it can be set up to show sat nav directions, music, system info, the normal stuff you expect these days.

In the centre the Android based infotainment system works well, it’s responsive and clear to use, working with both Apple Car Play and Android Auto.

Honda have taken to keeping the heating controls as hardware buttons, which is most welcome, but the volume is touch sensitive on the main panel, or it can be controlled via the steering wheel mounted controls. 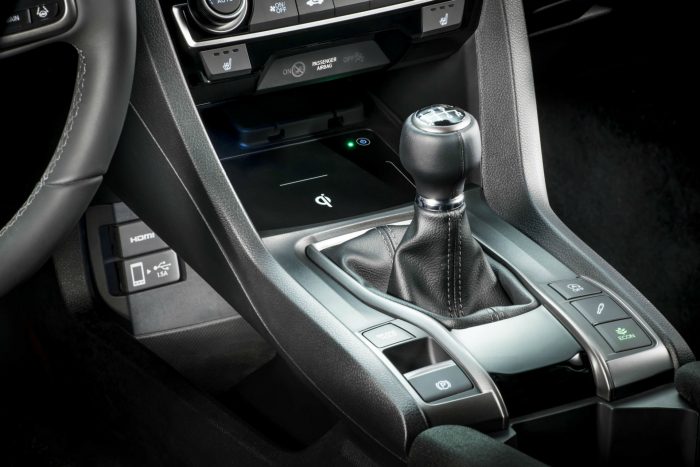 You get a Qi wireless charging pad on Sport Plus trim and above, another smart feature which will help future proof the Civic.

The 12v cigarette lighter is placed behind the main centre console, along with a HDMI input and a 1.5 amp USB socket. Cleverly there’s a cut out that lets you feed the cables through to the centre console.

There’s also another USB socket in the centre armrest. 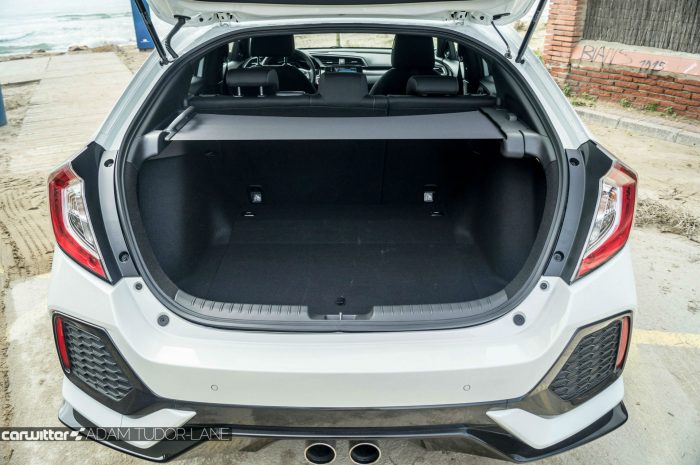 At the back, boot space is class leading at 478 litres (420 if you have the Sports exhaust as shown). Honda have also come up with a nifty idea for the tonneau cover.

Instead of pulling from a unit fitted into the rear seats it’s side mounted, so you don’t have to store a parcel shelf, or fiddle about with a large heavy roller blind type device when you need unhindered access all the way through the vehicle. 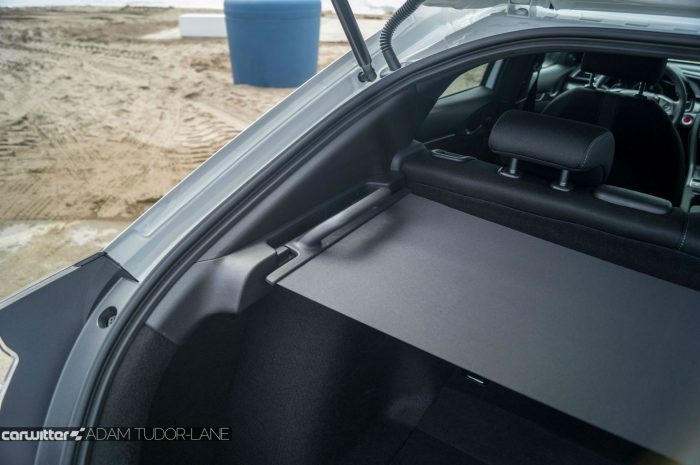 Sadly, Honda’s wonderful ‘Magic Seats’ are no more, which is a massive shame as you could previously switch from a family hatch to a pickup like, cavernous vehicle with the rear seats removed.

Nevertheless, head and legroom is really very good for back seat passengers, in fact the whole cabin feels a lot more spacious…which it should with the increase in dimensions. 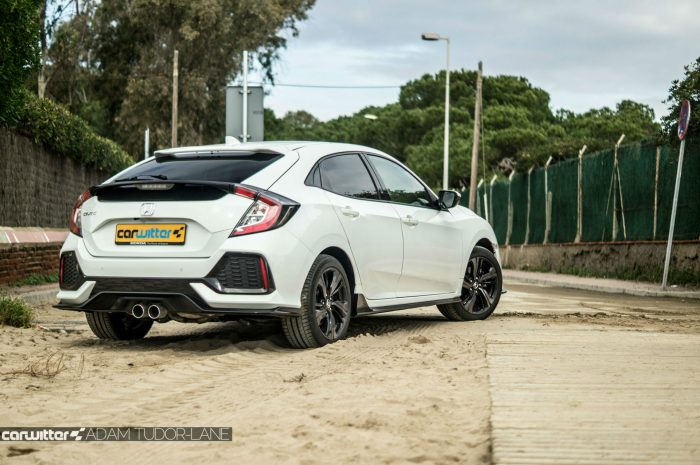 For us the new Civic is a bit of a mixed bag. The interior is really well sorted; quality is great and aesthetically it’s where it should have been years ago.

The exterior looks a bit too fussy, like they’ve tried too hard, it’s also gone from looking like a hatchback to a saloon.
There is in fact a saloon version, it has a small piece of window in the C pillar and fixed rear glass, and yet the looks are identical to the ‘hatch’. It’s not coming to the UK either.

The new 2017 Honda Civic hatchback will ultimately be a personal choice when it comes down to the looks.

However, the current power plants and gearboxes are very well sorted, they can’t really be faulted, so whatever you choose in that respect you’re on to a winner. 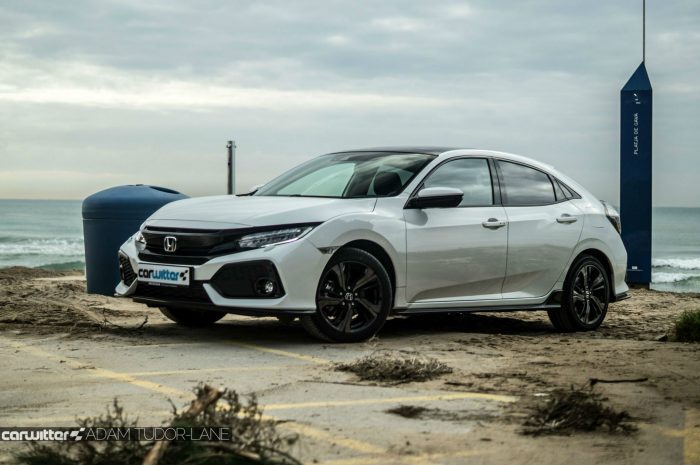 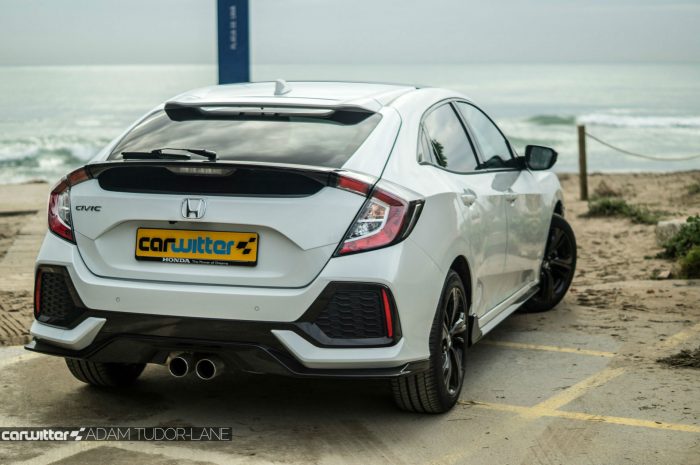