A few months ago I was fortunate enough to get the chance to drive the National Circuit at Silverstone, in cars that I will probably never get the chance to drive again; without spending a small mortgage, or matching 6 random balls. I drove the 150+ miles from my home in Somerset in a 10 year old Seat Leon TDI, and although this great little car has never let me down, I couldn’t help but feel my journey home would be a little less exciting than what lay ahead that afternoon. 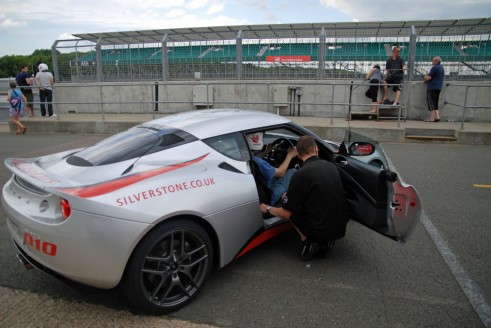 First car of the day was a Lotus Evora, I was down to drive an Elise but there had been issues with the car on the previous days sessions so I was upgraded to the Evora. The first thing I noticed was that the sills are extremely wide, which can make getting in or out a little different. Ladies, if you find yourself in one of these as a driver or passenger, trousers are a must if you wish to maintain your dignity. The Lotus was a fast, fun little sports car, not the fastest car out there but fast enough for someone with no track experience, it was a perfect car to learn the fairly easy National Circuit. Six laps later and it was someone else’s turn while I had a few moments to reflect and watch from the pit wall, before returning to the wheel for my second session.
The instructor had informed us during our briefing that having a break usually helps, and climbing back into the Evora I already felt more confident, i was itching to go again! The next six laps compared to the first went by in a blur, as the instructor kept the orders coming: “up a gear, gas, brake, off the brake, down a gear, turn, balance throttle, aim for the cone, gas, up a gear…”
The Evora was equipped with a paddle shift gearbox and this was the first time I had driven one of these, I found it ok…but not sure how it would fair in daily use, as the car felt rather heavy and clumsy at low speed as we entered the pits, and almost as if it would stall when we came to a halt. 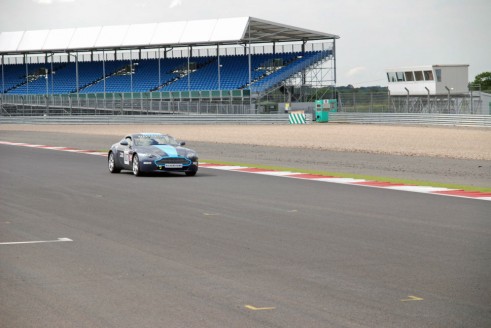 Next up was an Aston Martin V8 Vantage. Of the three cars I drove, this would be the one I would happily have driven home given the chance. Fitted with a conventional H pattern manual ‘box it felt like much more fun driving this around the track as I felt connected to what I was doing, yes the paddles in the Lotus were great but there’s something about a good old manual box. That, coupled with the fact that I now felt like I knew the circuit (although I hadn’t managed to get Brooklands right all day) I could really give the Aston everything, which im sure was probably nowhere near what it was capable of. Again the Aston wasn’t the fastest car out there, but it was the best looking, the most comfortable and made the second best noise! 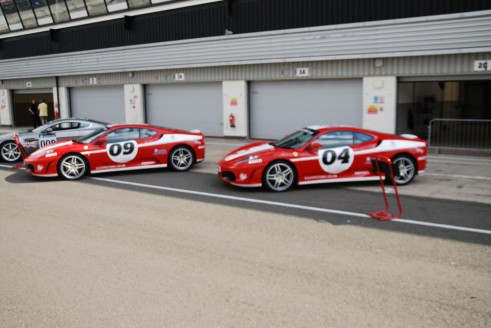 The best noise however was reserved for my third ride of the day, a Ferrari 430. The first thing that happened when the instructors strapped me in and adjusted the seat, was to ask me to take my right shoe off…as my foot being quite wide would have touched the brake while driving! Again the Ferrari had a paddle shift gear box, but this one had the paddles staying fixed in one place behind the steering wheel, where as in the Lotus they moved as you turned the wheel; which threw me at first.

The Ferrari was, and still is, without a shadow of a doubt the best car I have ever driven! But I wouldn’t fancy driving one around your average British town. The rear visibility was terrible, with a wide rear, plus the heavy steering at low speed made entering and exiting the pits a bit of chore. However the noise and power are incredible! The on board video taken while driving showed that I hardly stopped smiling from start to finish. Acceleration was fantastic, the braking very comforting for someone not used to travelling at these sorts of speeds, and the car felt so balanced through the tricky Brooklands, Luffield, Woodcote section of the lap. My six Ferrari laps flew by, I had really began to feel confident on the track. The order i had driven the cars in was great, while the Lotus was a lot of fun I wouldn’t have wanted to drive that last, after either the Aston or the Ferrari, and in comparison i wouldn’t have wanted to spend my Ferrari session learning the circuit. 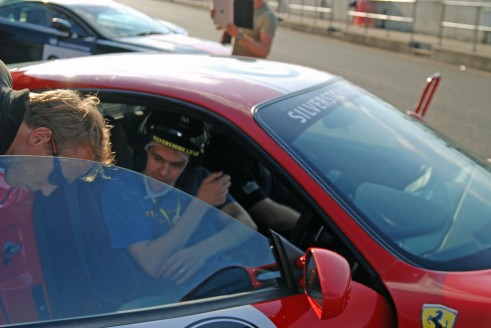 If you ever have the chance to do any of the above sessions, or anything similar at any track I would seriously recommend it. It may not be cheap but I know Silverstone have special offers from time to time on their website, which can see you saving upto 50%! Its also worth mentioning that for £10 you can cover yourself in the event of an accident, which again I would recommend. No one during the time I was there needed it, but I for one wouldn’t want to pick up the repair bill on any of the cars should anything go wrong!
Oh, and yes, my ride home that evening was fairly ordinary by comparison…

Fancy a track day for yourself at Silverstone, check out their current experiences here!

Renault Captur Review – The new kid on the block