When it comes to pickup trucks Mitsubishi has been in the game for a long time, since 1978 in fact with the inception of the L020 model. 2019 sees the L200 Series 6 hit the market, we headed to Silverstone to find out what it was like. 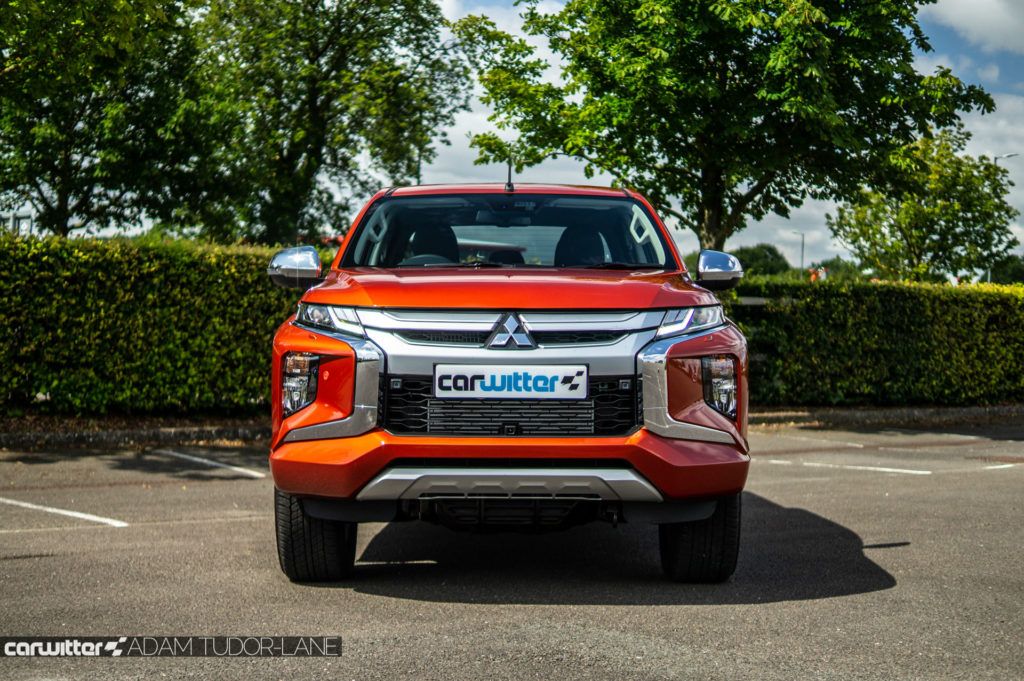 I can’t say I was a fan of the series 5 L200, it seemed far too small and soft, in fact it had barely changed from the bubbly looking fourth generation which came out in 2005. To the untrained pickup truck eye, they’d be hard to tell apart.

That’s all changed with this latest model, the L200 has taken on the ‘dynamic shield’ styling that’s present across the range – basically, that means those two large chrome bits on either side.

Big, butch squared-off arches are now the order of the day, match that with a 40mm higher clamshell bonnet, LED headlights, DRL’s and some angular chiselled looks and the L200 now confidently places itself among the rest of the modern-day trucks. 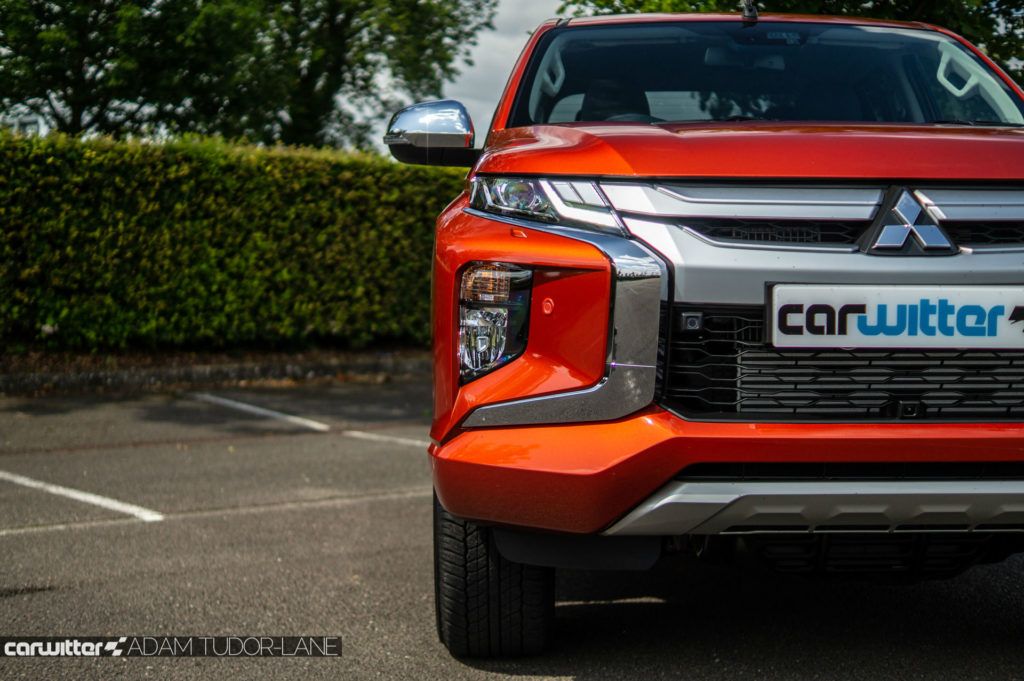 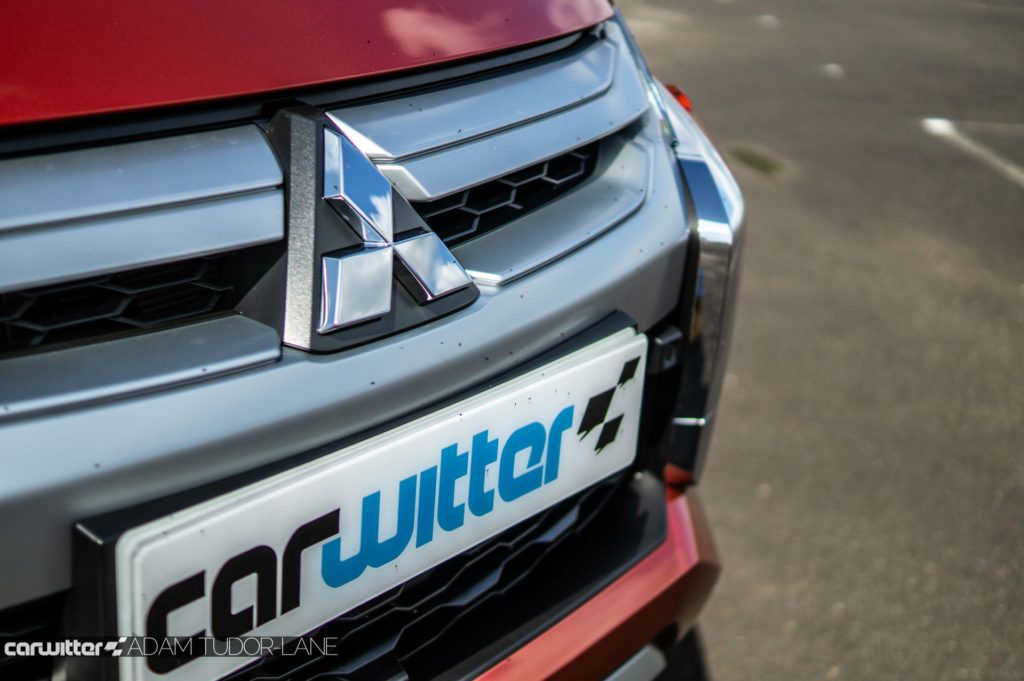 Mitsubishi state that the L200 Series 6 is more car-like to drive than ever, with revised front and rear suspension along with a reinforced chassis which has improved ride comfort.

That’s a big statement, and we were hoping for big things, but it’s not quite all that rosy, you see when you have leaf springs on a pickup with no weight in the back they’re relatively rigid, which leads to wobble and shake over imperfections in the road.

Some trucks are worse than others, the current leader is the Navara NP300 and the Mercedes X-Class, they genuinely feel ‘car-like’ in the way they ride, we hoped the new L200 would be the same, but it’s not. 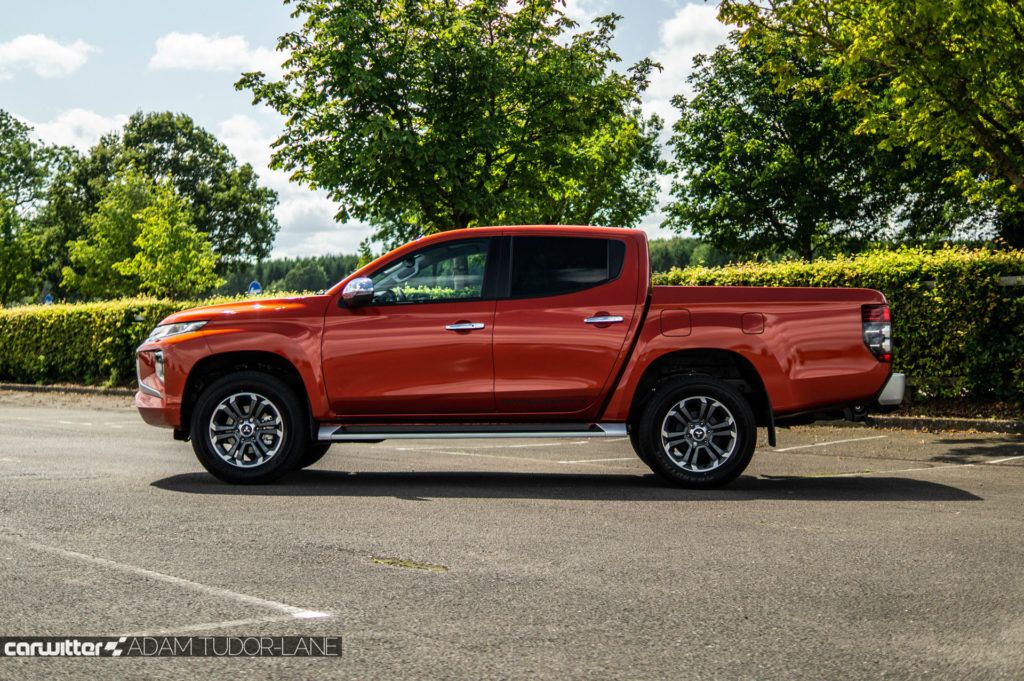 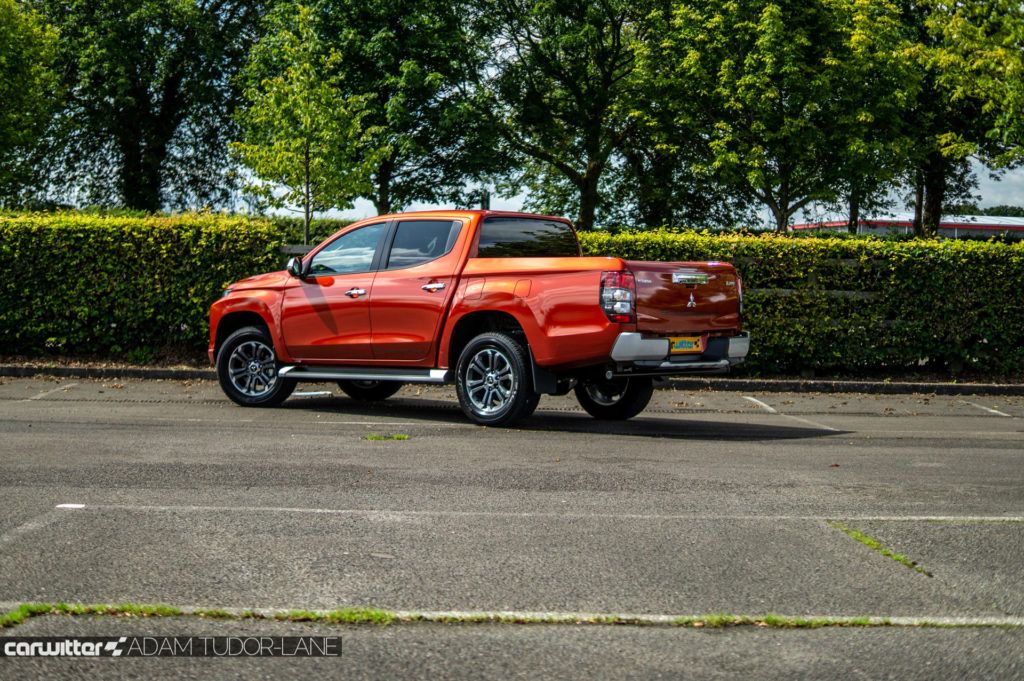 One thing that was incredibly surprising though was the way it handled, for such a stout, upright vehicle with a high centre of gravity the new L200 deals with roll and pitch incredibly well, especially when towing a near four-tonne load.

More substantial brakes aid in wielding such weight and a new four-wheel-drive system allows changing from 2WD to 4WD at speeds up to 63 MPH, it’s also the only one-tonne truck equipped with a low-ratio transfer case.

Those new drive modes also include 4H with a locked centre diff, and 4LLc which is your standard low-ration but with a locked diff. All the systems work with the cars traction control and stability systems which we put to the test on loose gravel, mud and through a suitably challenging off-road course.

The L200 was unphased, from drifting it through gravel pushing the traction control to the max, sliding through mud while pushing hard on a rally course or slow negotiating flooded mud ruts, it’s one hell of a capable vehicle, especially at this price point. 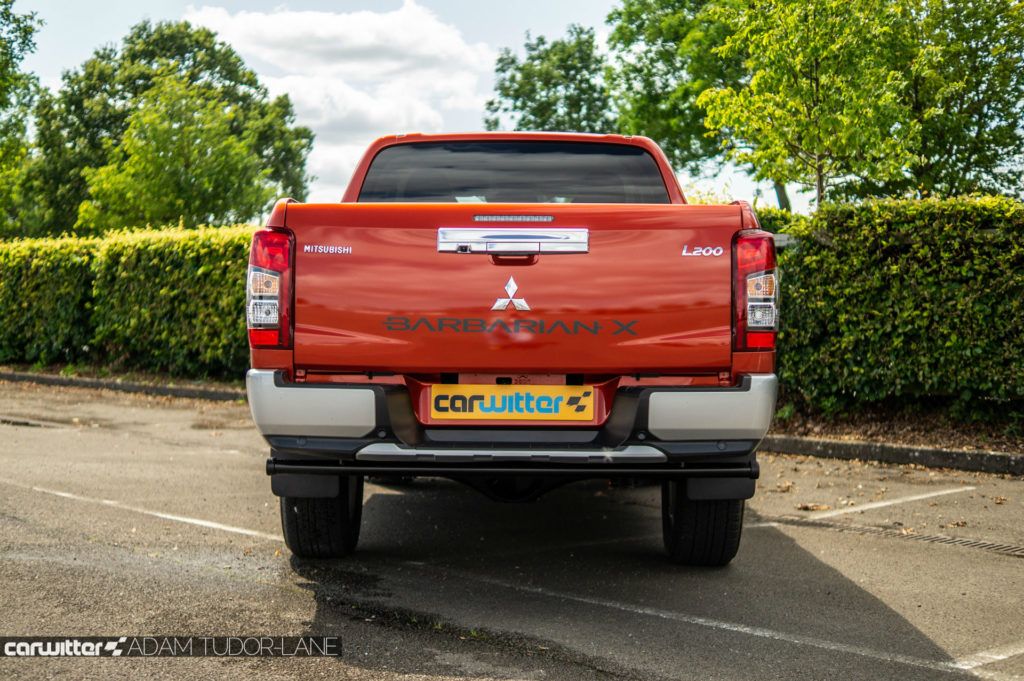 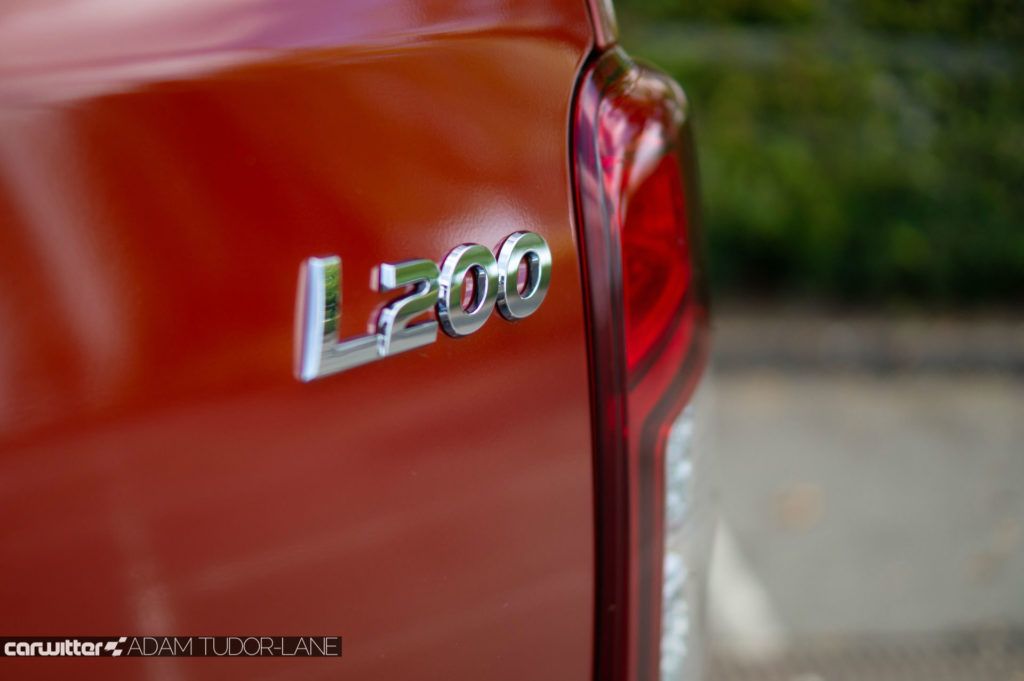 Another great thing is that the L200 slips in under the 2,040 kg weight limit. Why is this important? Well, it’s a little known fact, but one you should know if you’ve ever read the highway code. Vehicles above that weight are categorised as a van, that means the speed limits change for single and dual carriageways, 50mph and 60 mph respectively, motorways remain the same.

It’s a small point, but something many owners can get caught out on when driving past camera vans or speed cameras. 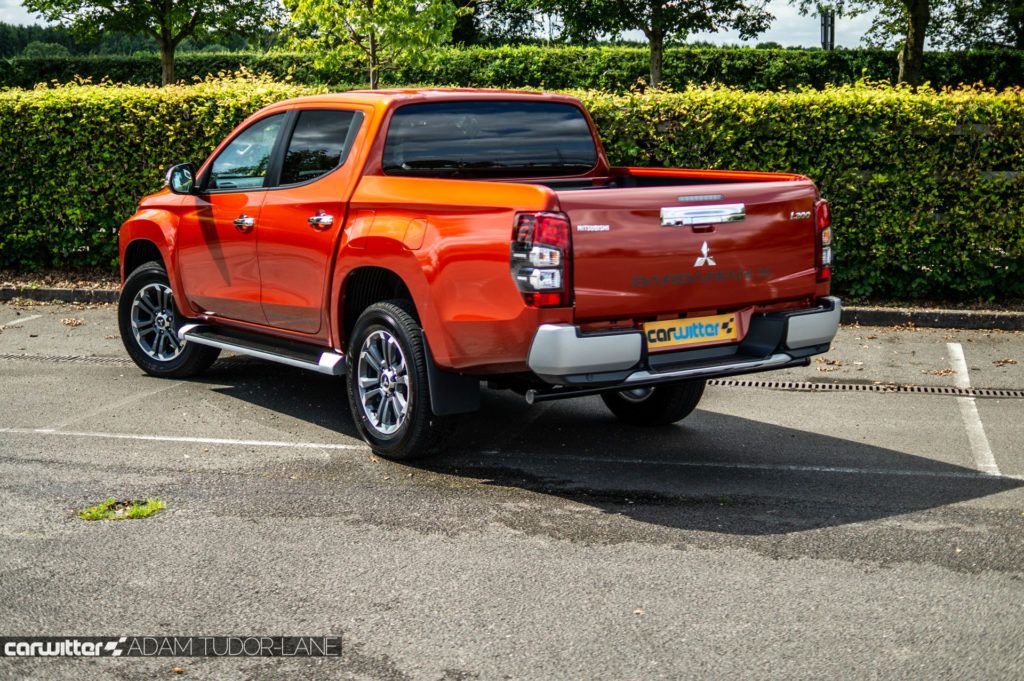 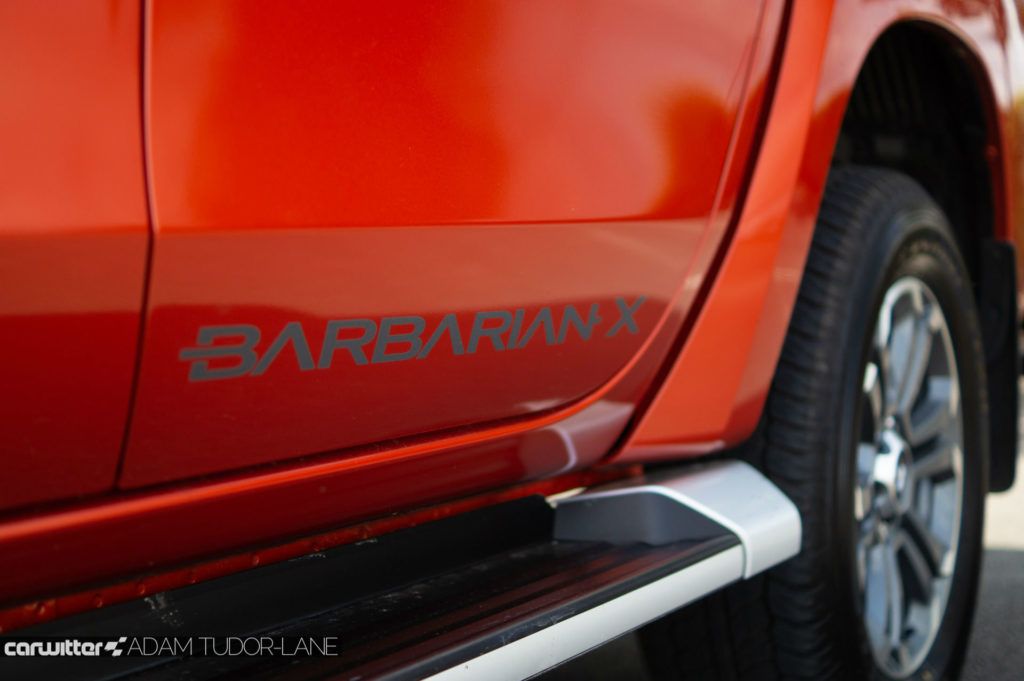 On-road handling isn’t half bad, steering is pointy and far sharper than some of the competition while the 2.3 litre (2268cc to be precise) engine makes a healthy 148 BHP and 400 Nm of torque.

Power delivery is a little on the relaxed side, you have to wait for that turbo to spin up then dump its power, but once you get used to it you know what to expect. The six-speed auto ‘box was slick across many terrain types and our short stint in the manual provided that ‘car-like’ feel we’d been searching for; again, a big plus over its ladle stirring rivals.

That new engine makes the L200 Series 6 one of the cleanest pickups on the market and is fully Euro 6d compliant, with a massive 21 litre AdBlue tank meaning it should only ever need topping up at regular service intervals. 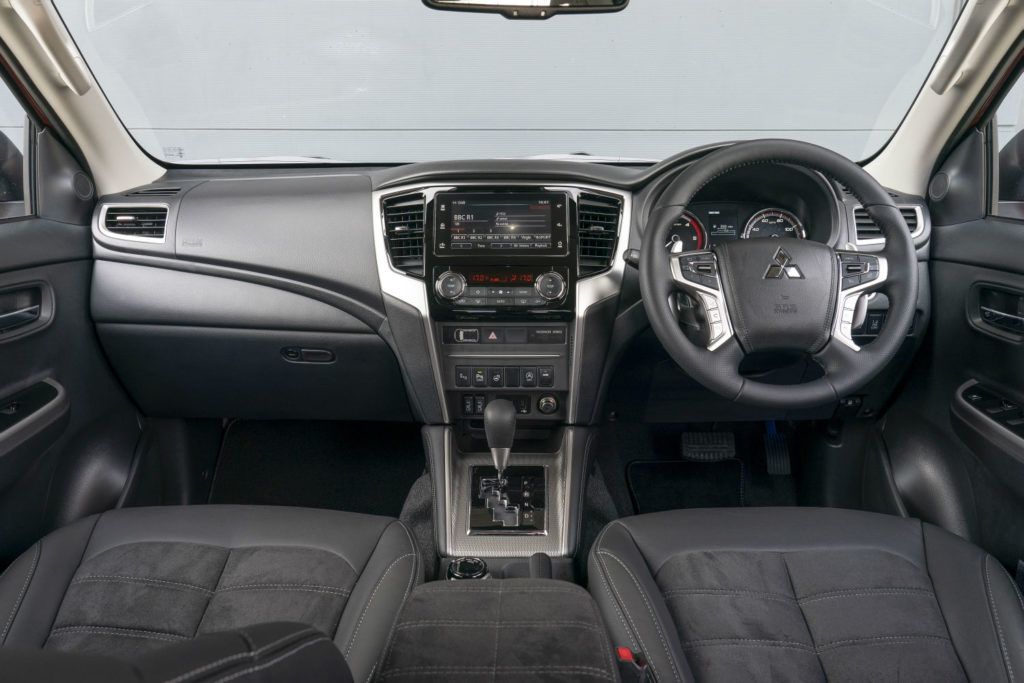 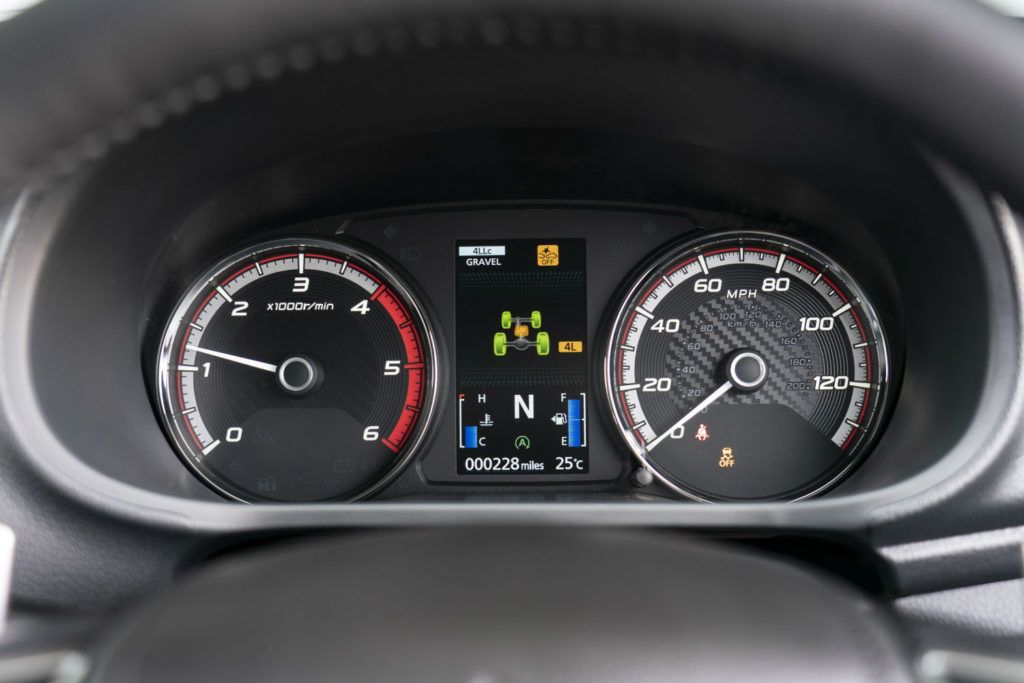 Hopping up inside the L200 you find the standard Mitsubishi switchgear, which looks a little dated by today’s standard but would be incredibly easy to use due to their size, though they are starting to look a little bit ‘Toyota from the early 90’s’.

Infotainment is taken care of thanks to a 7-inch touch screen which features Android Auto and Apple Car Play, it also links up with the 360-degree camera system on the Barbarian X model. There’s space for your smartphone both front and rear with USB charging ports if required. 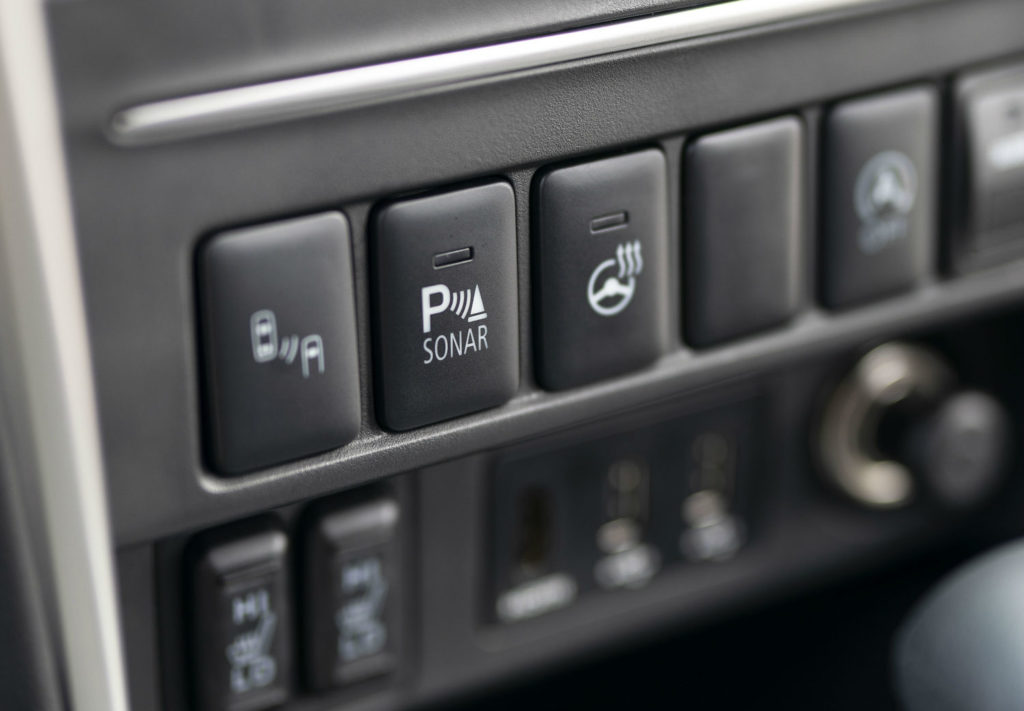 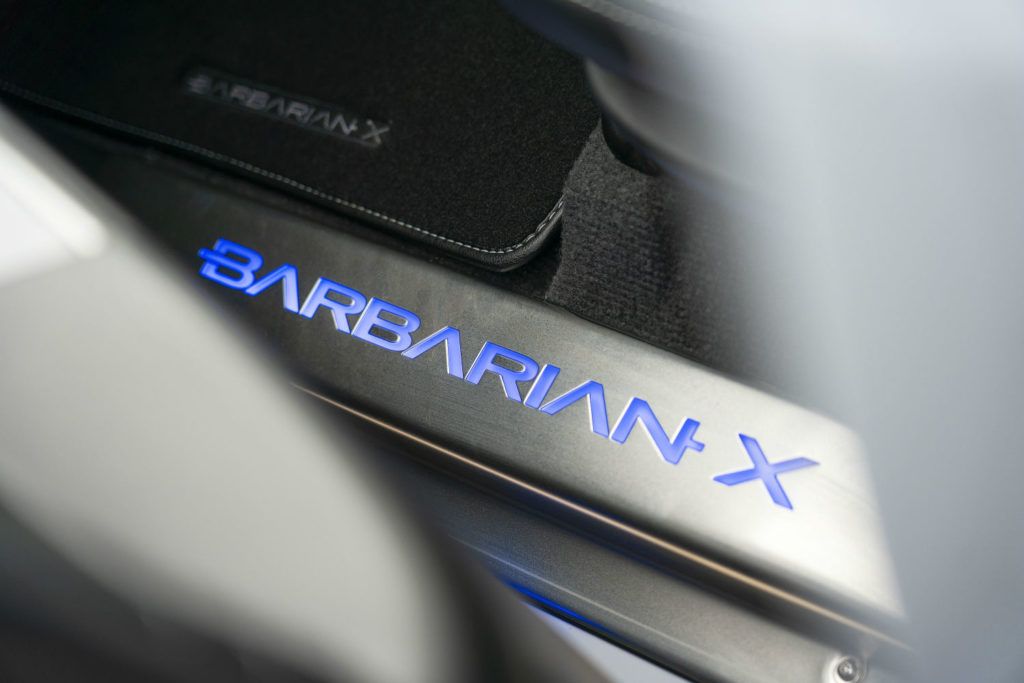 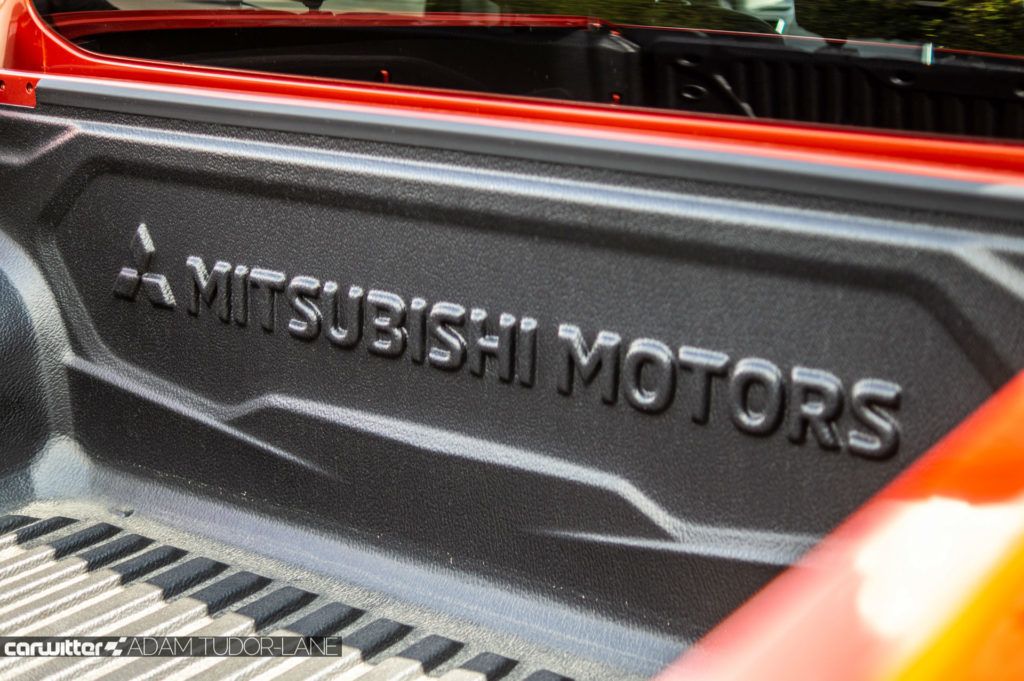 There’s plenty of space at the rear, enough to seat two adults comfortably.

The dials are nice and bright with the new colour TFT screen that sits between them being a welcome addition. You also get grab handles on each A-pillar, that’s the sign of a proper pickup if you didn’t know. 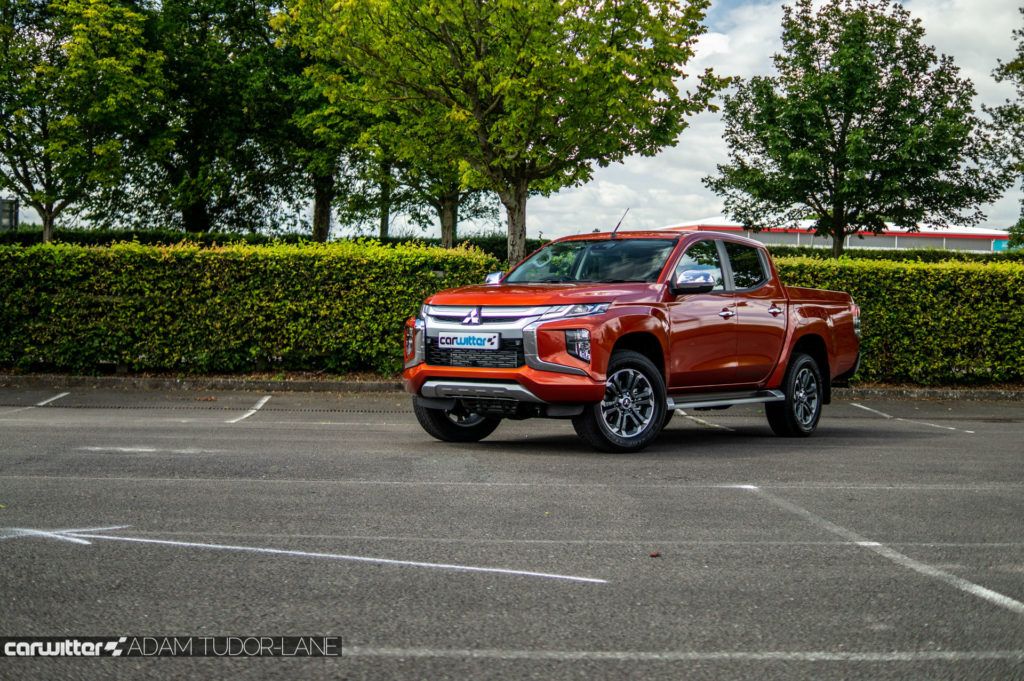 Starting at just £22,715 for the Double Cab 4 Life the L200 makes for a strong, practical purchase for a new working vehicle. While the SsangYong Musso starts at £17,795 ex VAT, it doesn’t have the kit and pedigree of the L200.

Closest competition comes in the form of the Isuzu D-Max at £22,009, considering it’s an older model with less kit and a smaller engine, we’d be inclined to lean toward Mitsubishi on this one. 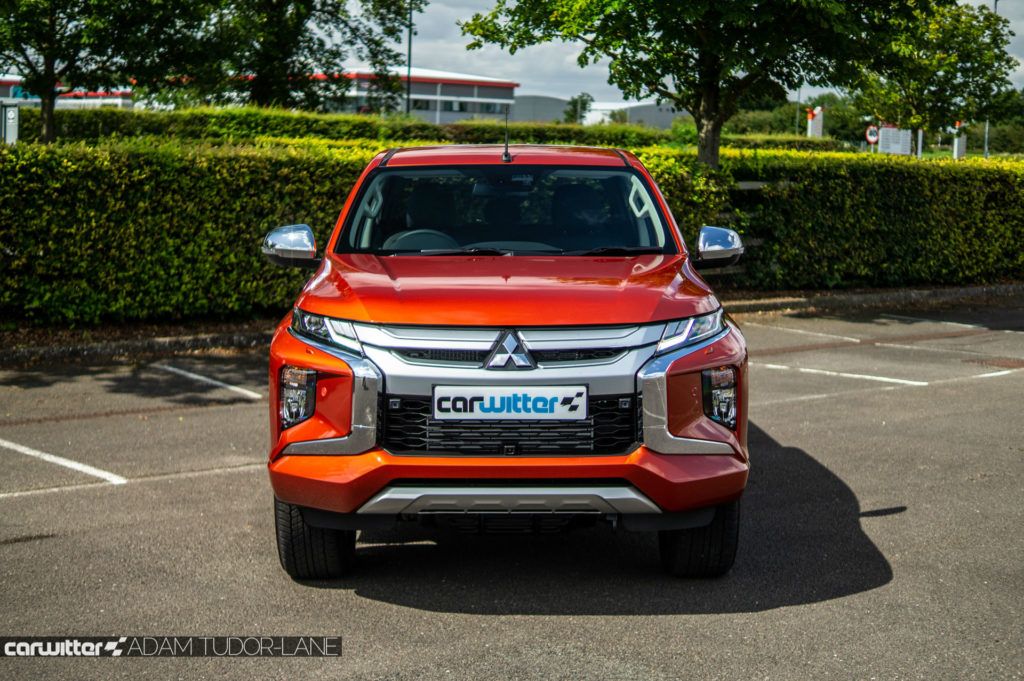