When segments start to boom it’s time to cash in, it’s now Mercs turn to join the ever growing pick-up market.

The X Class has been teased for around a year now, its gorgeous looking concept becoming slightly watered down in the process. Poised as the ‘Premium Pick-Up’ can it really be top notch when it’s based on the Nissan Navara chassis?

We spent 24 hours in Wales driving nearly 400 miles to find out. 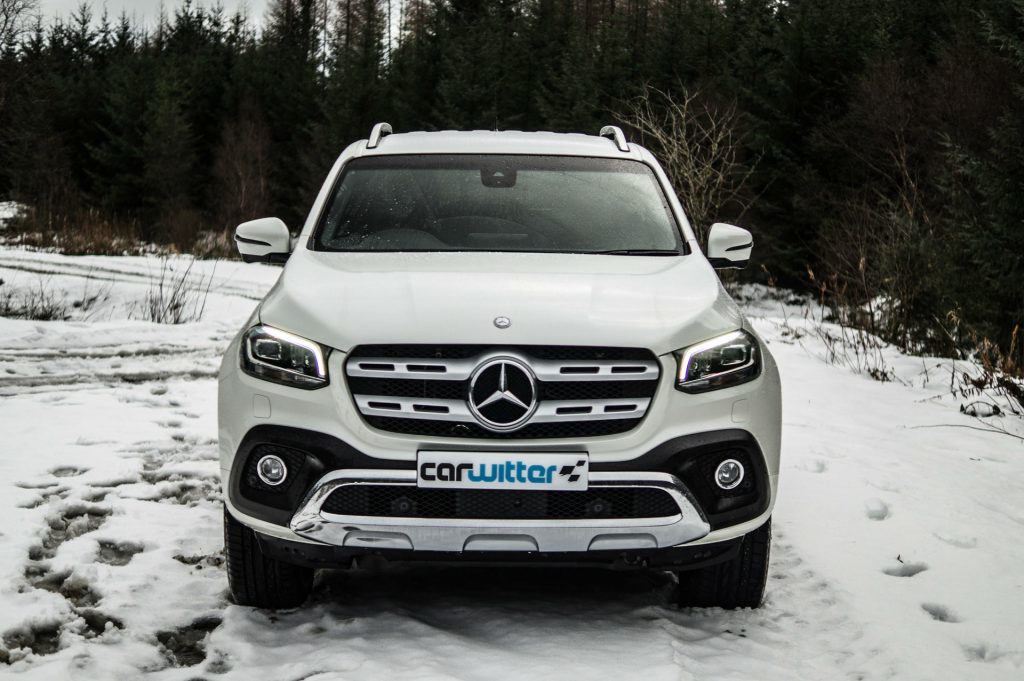 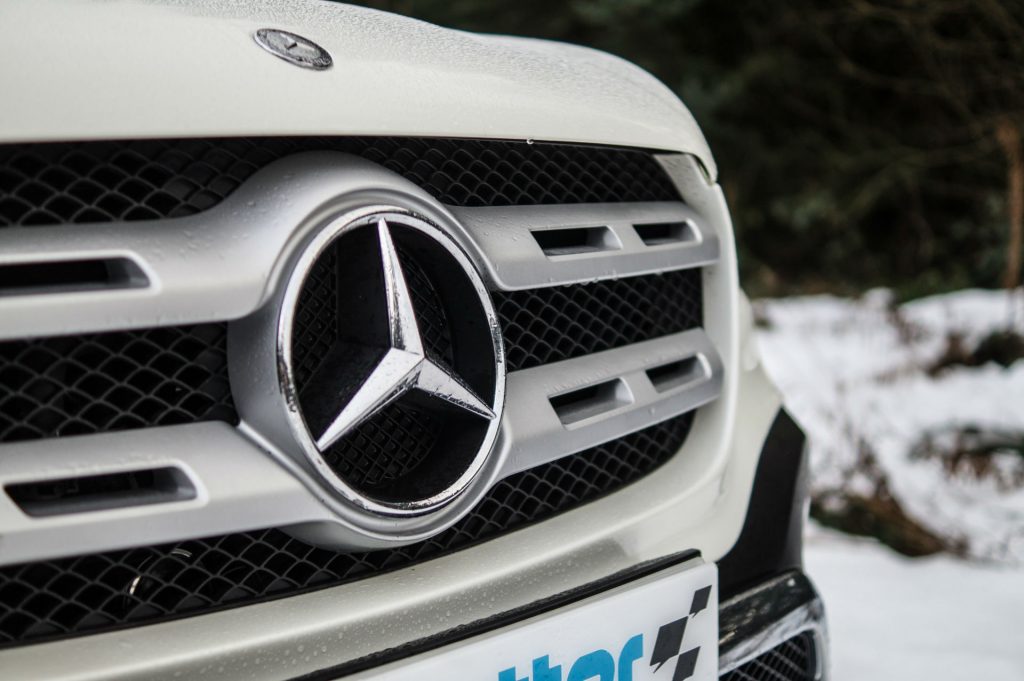 Alas, it’s still a very handsome machine. An extra 50mm width over a Navara really helps give it road presence, at the back that extra girth increases to 70mm over its Jap rival.

In fact from the base chassis up, everything is Mercedes. The bold grille with the three pointed star asserts this as an all-German affair. 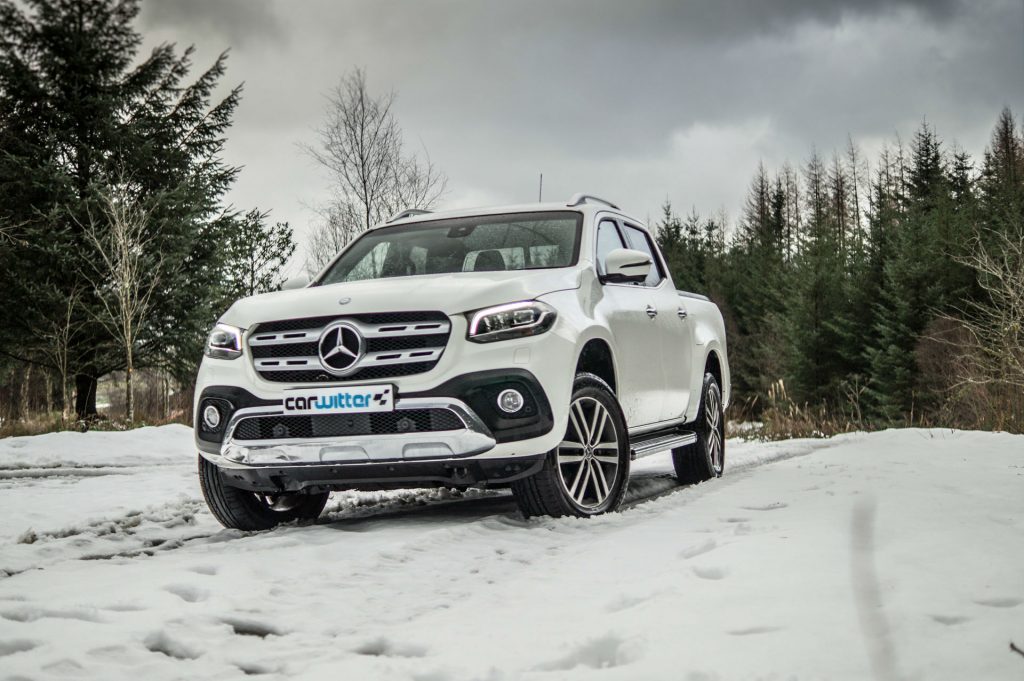 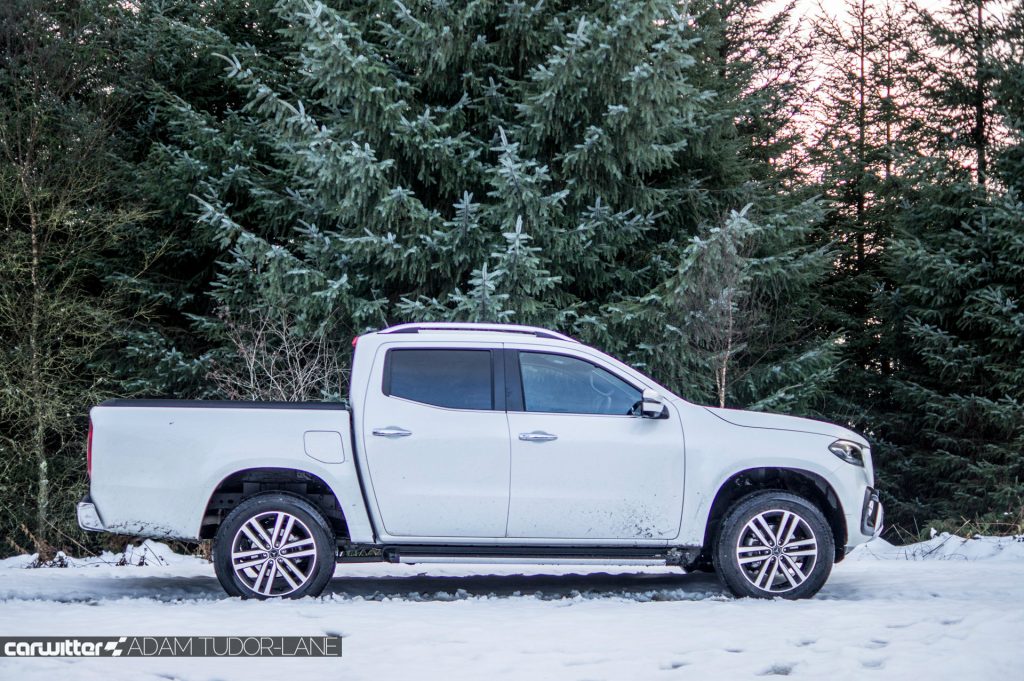 A high waistline matches with the truck bed, subtle flares over the arches make the X Class appear even wider than it is. Whilst the back sees the rear lamps at the outer edges of the body, almost falling off there’s so little metal around them.

We’ve seen many pick-up clones in the last few years, but the X Class certainly stands out on its own, which it has to if punters are going to stump up the extra cash. 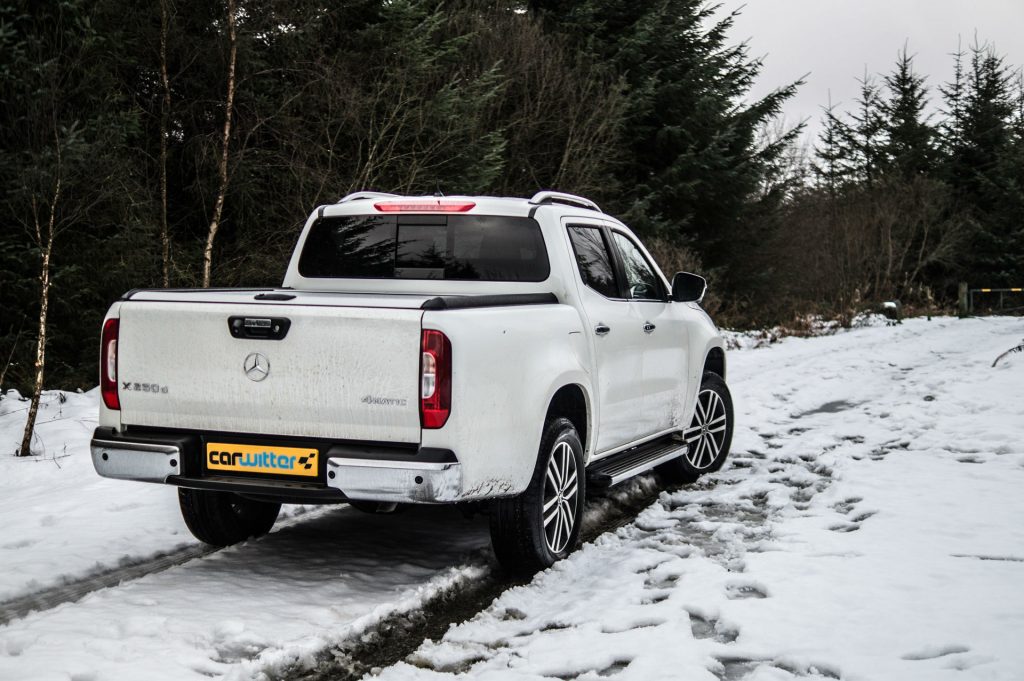 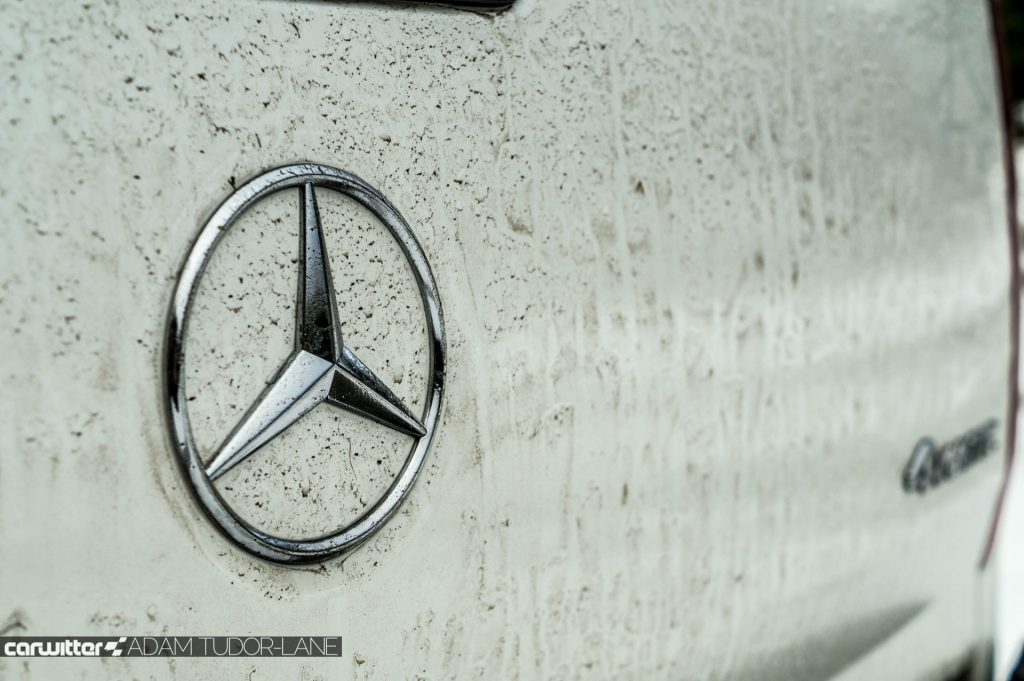 Jumping in a top spec ‘POWER Line’ trim meant we had a 2.3 litre twin turbo diesel lump sitting in front of us.
Power wise that means 190 hp and 450Nm of torque, which is good for a 0-60 time of 11.8 seconds. There is a lower powered option, this has a single turbo and produces 163 hp and 403Nm of torque, it’s not available on the top trim level though.

190 horses is plenty enough, even in this two ton truck you don’t feel left wanting. It’s spritely enough to overtake with ease, but we wouldn’t want to opt for the lesser turbo’d model as this just felt like the right balance.

A fire breathing 3.0 litre V6 diesel is coming later this year, which will make a whopping 258 bhp making it the most powerful pick up on the UK market. But that’s likely overkill for most. 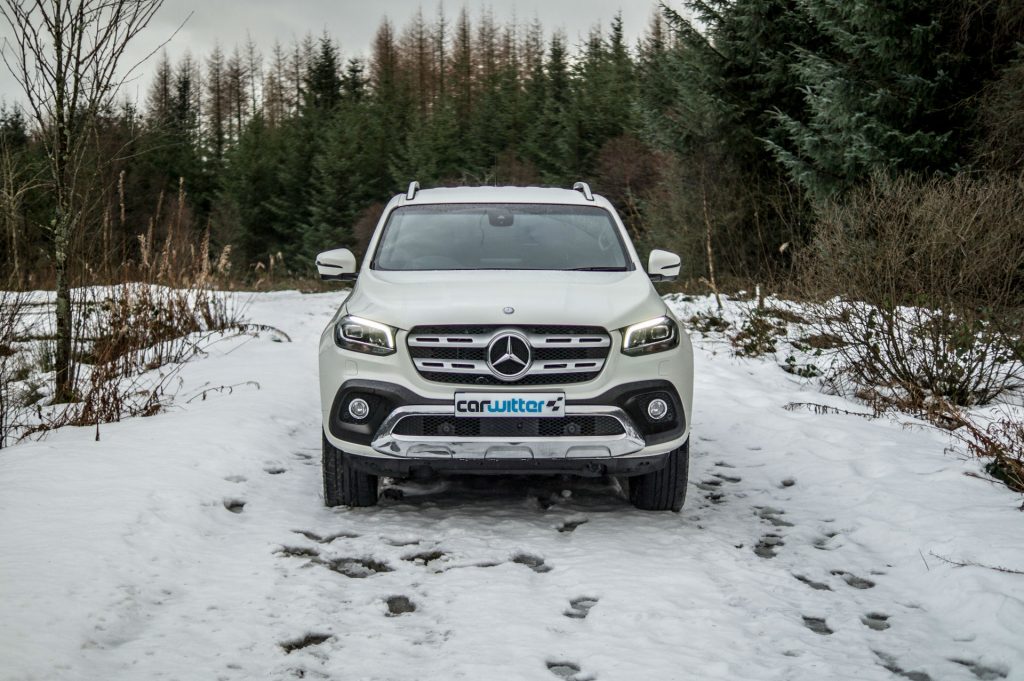 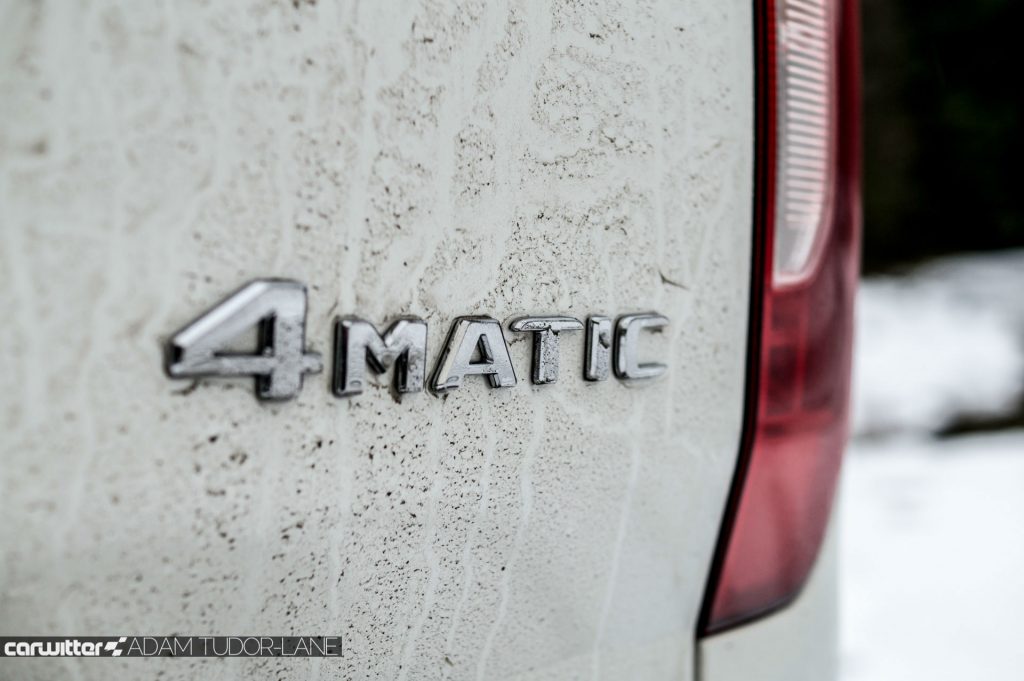 The biggest surprise was the ride. Pick-ups are bumpy, wobbly things. Unless you’ve got some weight in the rear, you find the back end shimmying and shaking over the smallest of imperfections.
Not so in the X Class.

There were times when we totally forget we were in a truck. Especially when barrelling through the Welsh wilderness at night, tight twisting right and left handers being taken at a healthy speed…it felt like we were in a larger crossover.

That wobble and bump that trucks are known for is barely there. If you hit a particularly bad rut, or an expansion gap there’s a slight quiver but on the whole this thing is solid.

Cornering stays remarkably flat, but steering feel is definitely truckesque. You have to initiate roughly 10 degrees of lock before anything seems to happen beneath you. Now the X Class is no sports car, but its ride is so far removed from a normal pick-up you’d have hoped for a more assertive wheel.

Another thing you notice is how silent the X Class is. There’s barely a hint of the gruff diesel sitting in front of you, and road noise is also kept to a minimum.

Its gearbox is another big win for Merc, our 7 speed auto was buttery smooth. It may be a fraction slower than you’d like when shifting cogs, but that’s allowable as you can’t feel a thing. Perfect. 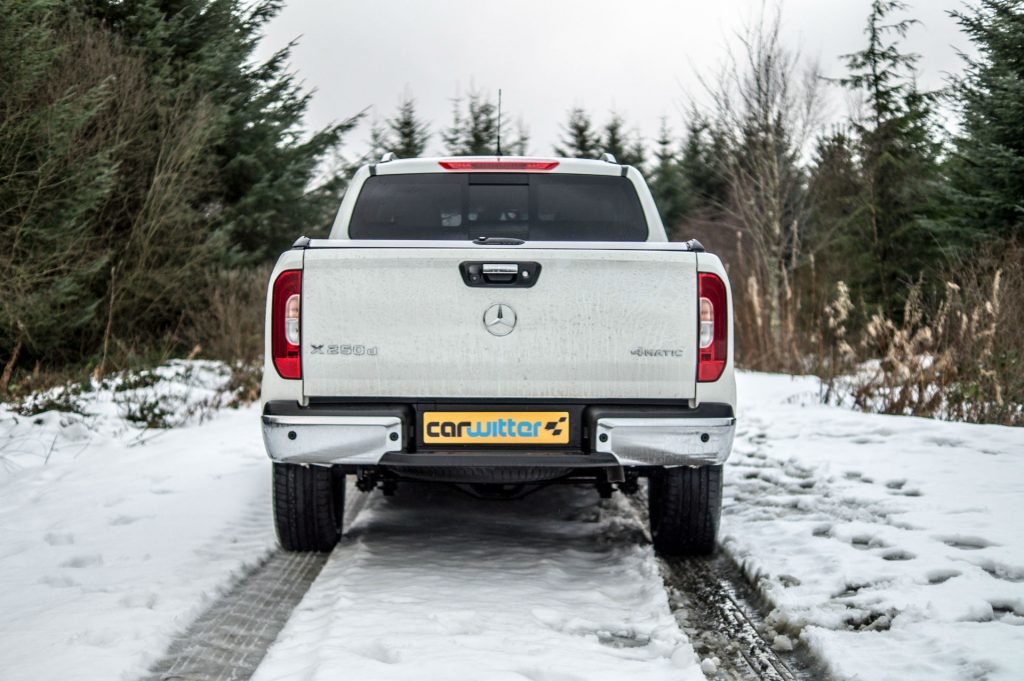 Inside is pure Mercedes, from the smart ‘X’ shaped air vents to the well-known high quality switchgear you’ll see across their car range.

Plastics get a little cheaper lower down on the dash, but it just feels harder wearing which is what you want in a vehicle of this ilk. 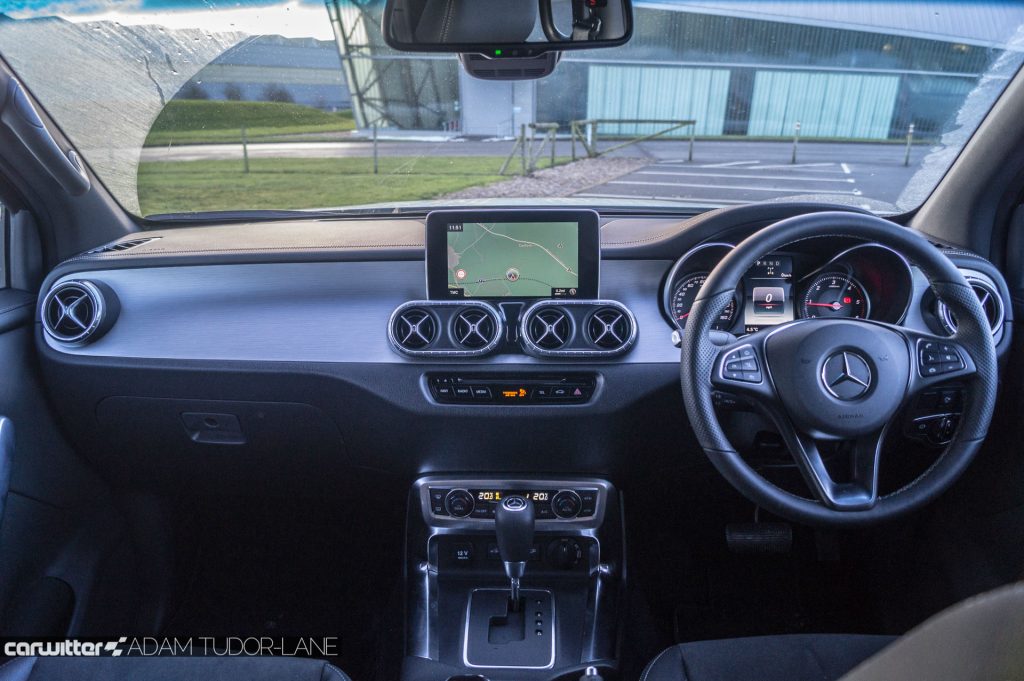 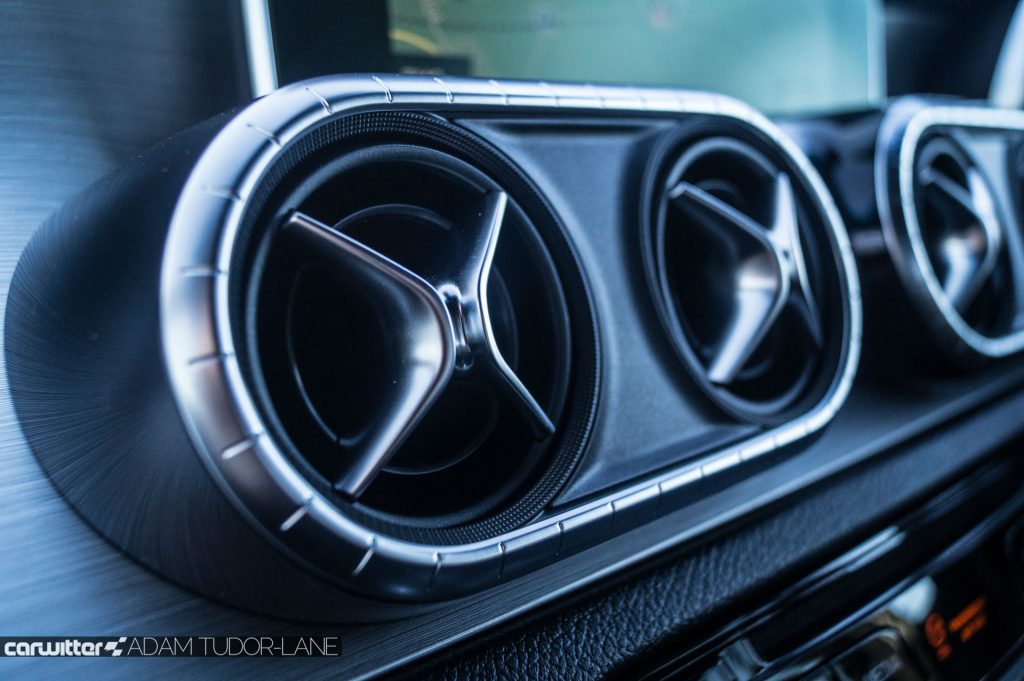 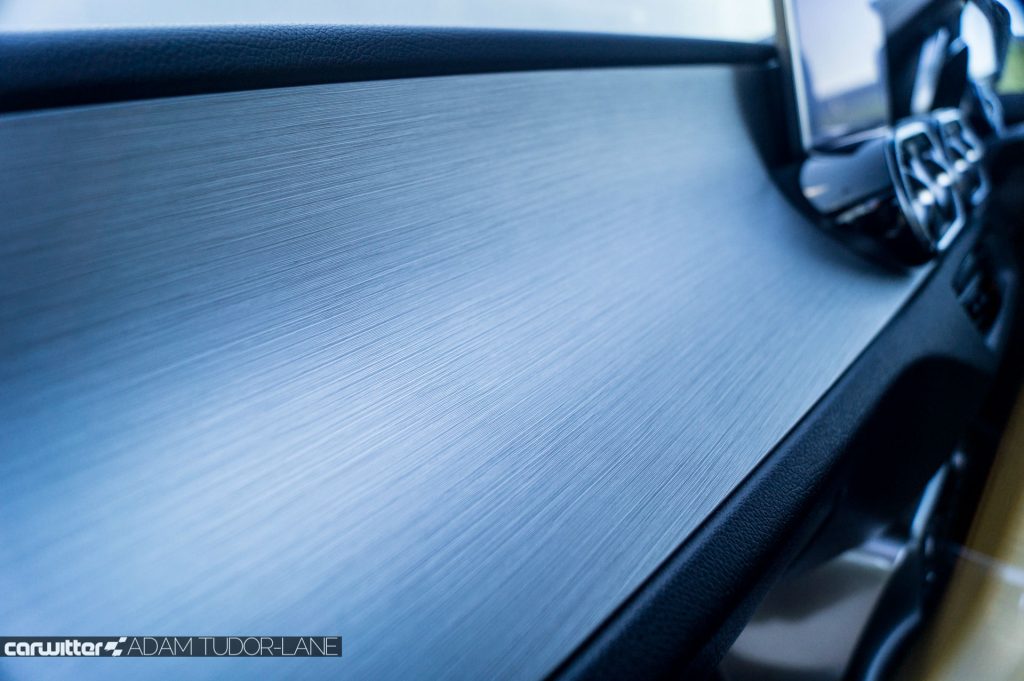 You can opt for full leather in either black or brown, with a choice of three dash trims – wood effect, aluminium, and matt plastic.

One thing that was a bit of a nag were the seats, I could never quite find a comfortable position for the lumbar support. They aren’t the most comfortable that’s for sure.

There are a few other quirks too, there’s no decent space to put your phone without it going in the central armrest (and being forgotten), the single indicator stalk is something else to get used to.

You’ll also find grab handles on the A Pillars, signifying the X Class is a proper pick-up. As part of an option pack you can also spec a cut out in the rear window. This slides open and closed via a little switch by your left knee, along with being cute it lets you put larger items in the cabin…it’s like a ski-hatch but made of glass. 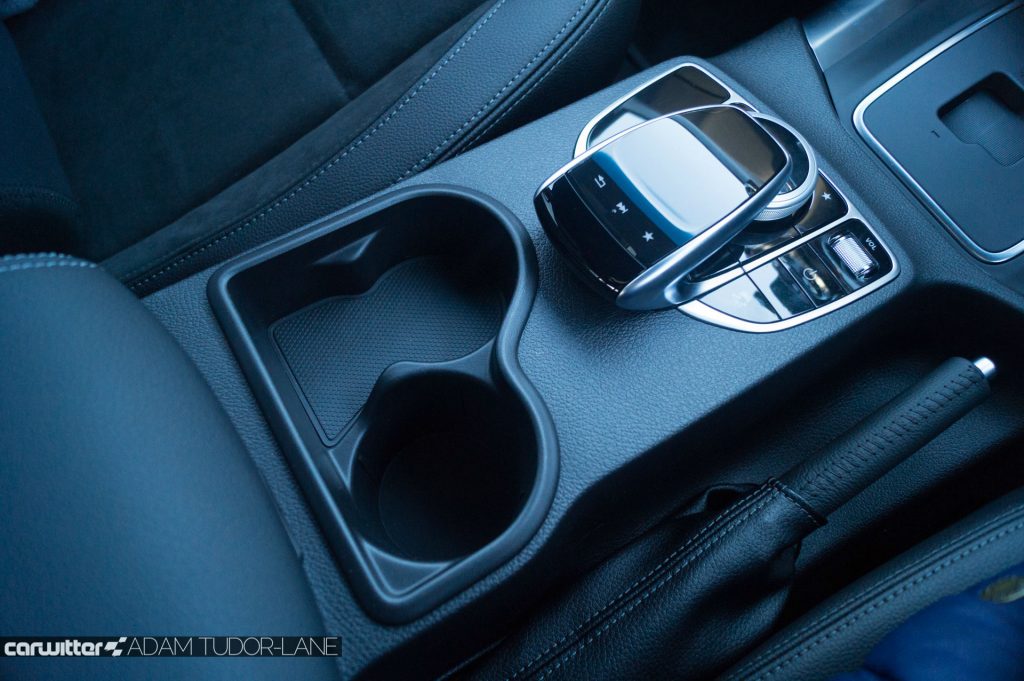 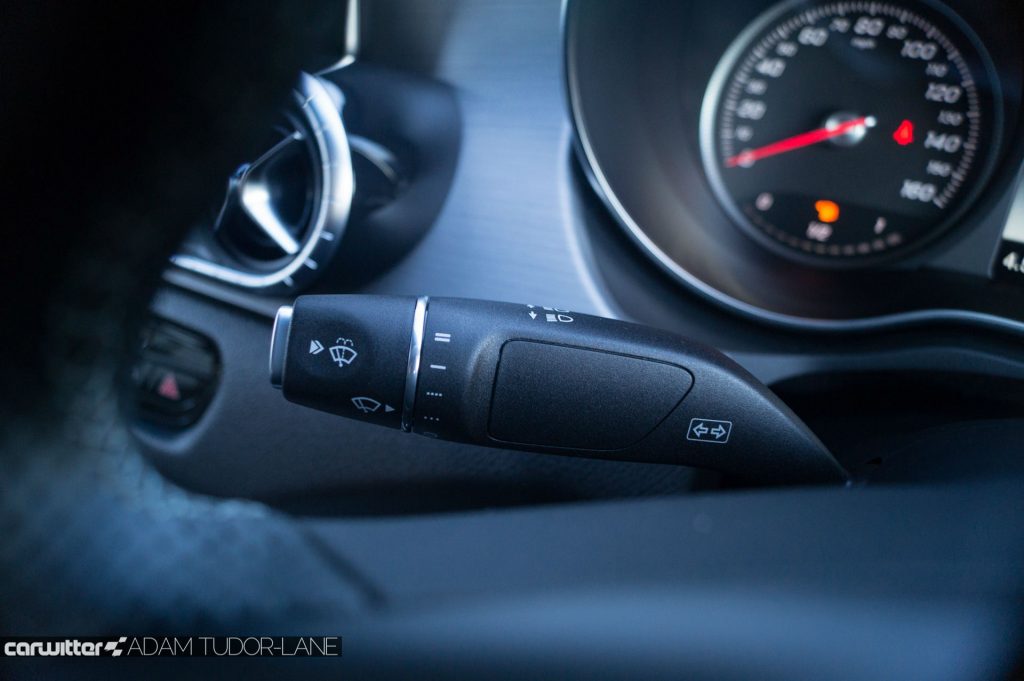 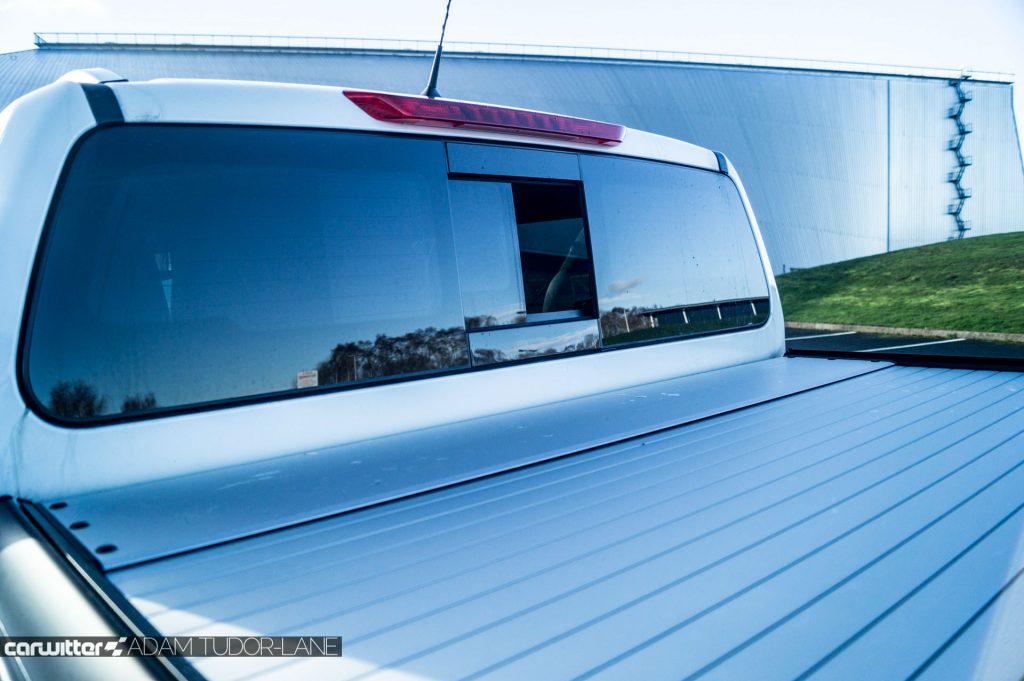 Although the X Class will only be available through Mercs commercial dealerships, sitting alongside the Sprinter, Vito and Citan it will ultimately appeal to far more regular punters.

Buyers in the market for a premium pick-up have a clear winner, the NP-300 Navara wore the crown for a while, but the X Class trumps it in every regard.

It’s affordable too, especially if it’s a company purchase sans VAT. The model we tested costs £34,100 without the tax, jumping to £40,920 with it.

The range starts at £27,310 excl VAT for the utilitarian Pure Line model.

You can find your nearest Mercedes Benz Van Dealership here. 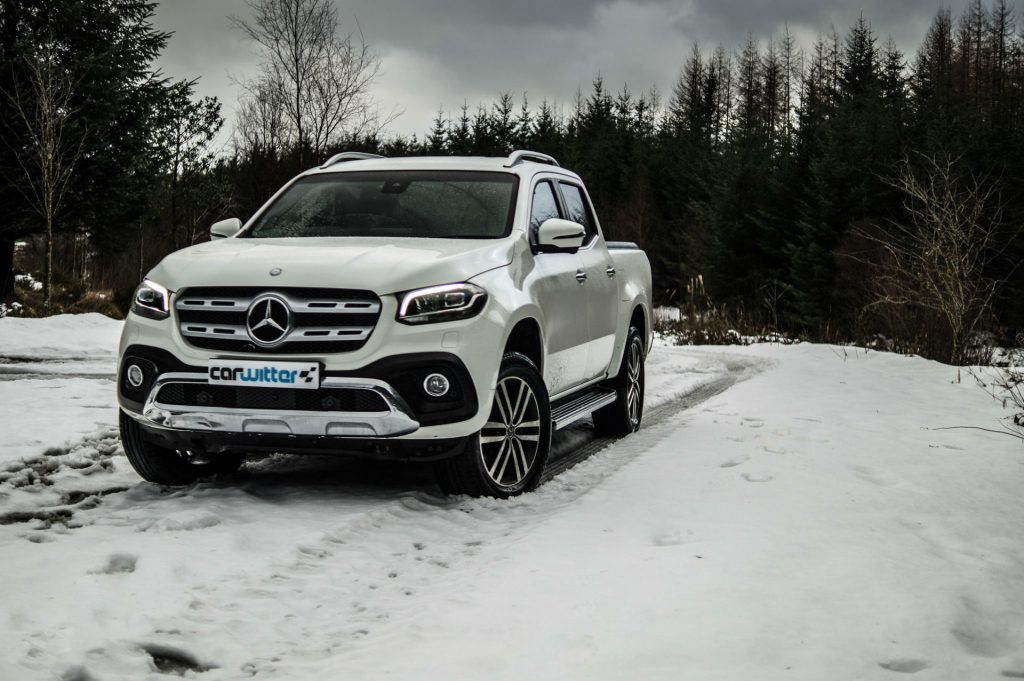 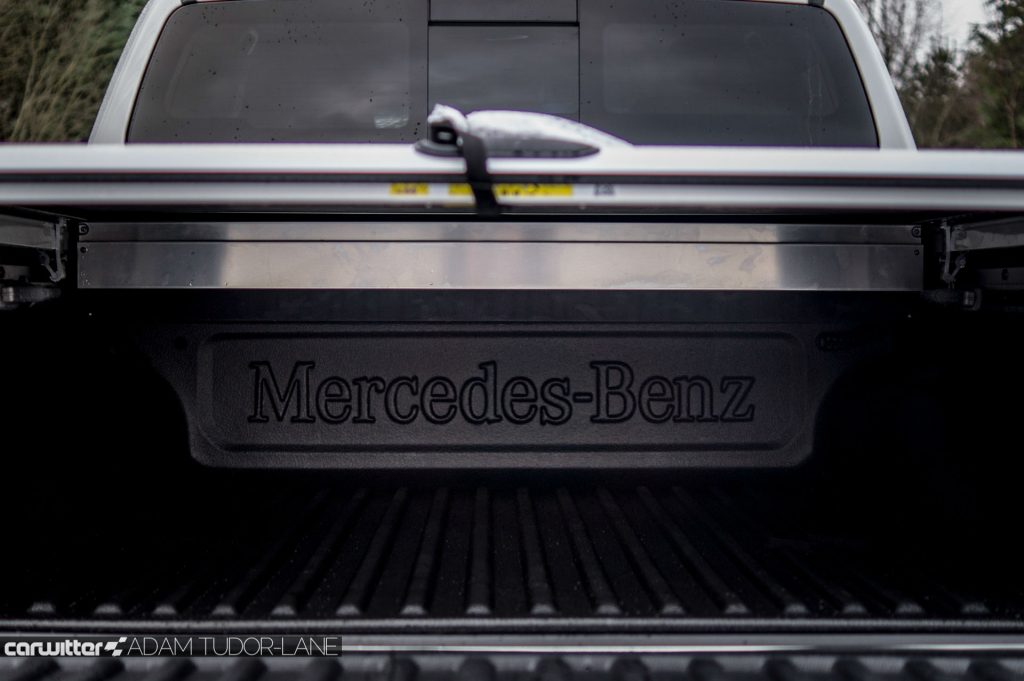 Buying vs Leasing, what’s best for you?