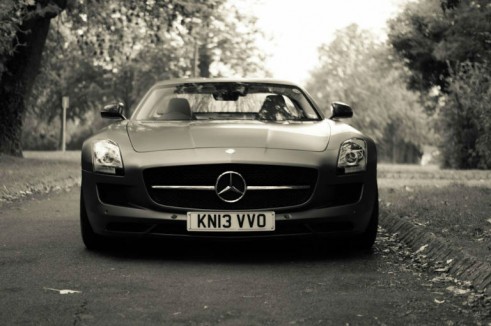 Mercedes originally released the stunning SLS Coupe back in 2010, three years on and with its replacement round the corner they have updated the model line up with a GT spec. Power has been upped by 19 BHP to a whopping 582, torque stays the same but the 0-60 time drops by .1 to 3.6 seconds.

All this fun starts at £165,030 – the model we tested however had such fancies as the AMG Ceramic composite brake system at £8k, exclusive ‘designo’ leather interior £5k, Carbon fibre exterior trim kit £3k and the matte AMG Magno Monza Grey paint another £3k. All in, and with some other minor upgrades our test car cost £188,355. 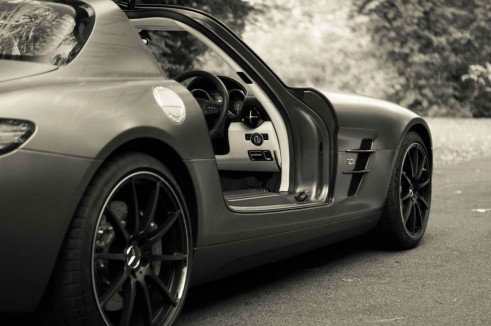 There is no arguing that the SLS is stunning. From every angle it’s simply beautiful, from its long nose to its short squat rear oh…and those doors…those doors! Gullwing in form and taken straight from the 300SL, they are a masterpiece. In fact the whole car – much like an F-Type – takes its styling cues from a classic, the 300SL was THE sports car of the day. Mercedes have done a superb job in bringing those famous lines into the 21st Century. 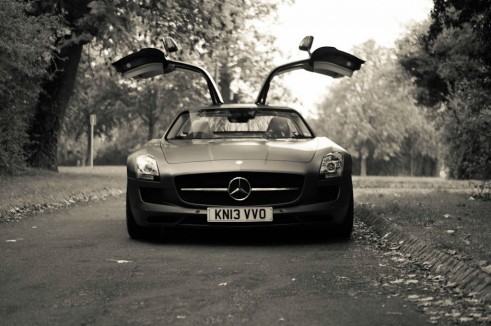 Mercedes were criticised for the lackadaisical gearbox in the standard SLS, well the boffins at AMG have now sped up the motions of paddle pull, to gear engaging by 60%. Now, we never drove the original so we can’t compare…but this thing changes gear bloody quick! Plant your foot to the floor, watch the revs climb and rattle off those up changes – it’s like gunfire. To me the change up was instantaneous. 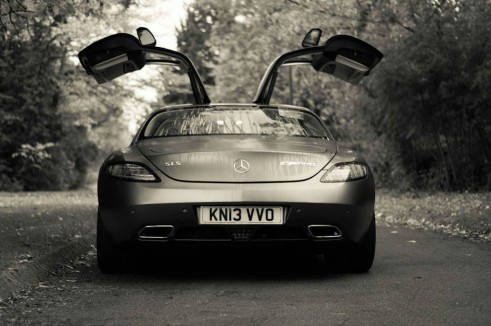 Now the acceleration in the SLS is ridiculous, its neck jarringly quick in any gear. We drove it on a rather damp autumnal morning, not the best conditions to try and feed nearly 600 BHP through rear wheels and onto tarmac.

Taking it smoothly we occasionally saw the ESP light flick on, when we pushed it that bit further the little light of safety was blinking away far more frequently. Truth is, even at 60 MPH you can put your foot to the floor and feel the car start to move sideways, it really is that much of a beast. It required smooth inputs all-round to get the best out of it, especially in those damp conditions. 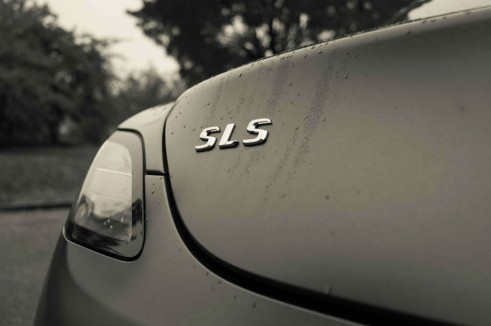 Merc have done away with the comfort suspension set up with the GT, leaving you with Sport or Sport+, however the ride isn’t that bad at all. Go over a ramp and it does feel as though the rear suspension has no springs at all, but through normal everyday driving conditions it felt fine, comfy in fact. Move the gearing up into the higher range and this is when the SLS really feels like a Grand Tourer, it calms right down, both in noise and drama.

The sound is something we have to mention, the 6.3 Litre V8 has its own unique note to it. I have watched it in GT racing the past few years and the unmistakable deep growl that accompanies an SLS is unlike anything else on track. The road car didn’t disappoint, have a listen! 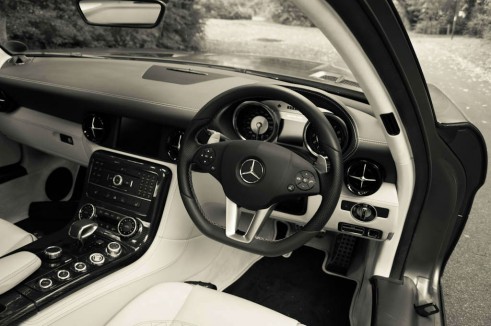 Inside the SLS everything is very snug, all the buttons in the centre console are angled toward the driver. The centre console – finished in carbon fibre – houses a simply laid out stereo, below are situated the Merc standard climate controls; something a bit more bespoke would have been nice here! 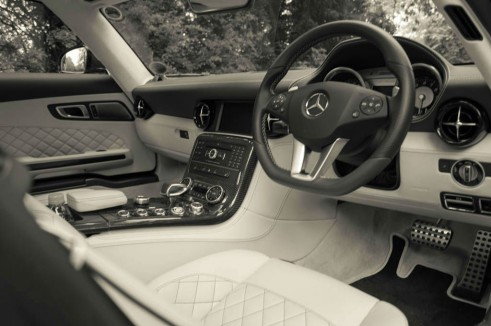 The seats are snug and fitting, as soon as you get inside you feel you are the master cog in the machine. The interior of our test car was trimmed in the exclusive ‘designo’ spec, brown and cream leather cossets the dash, soft cream alcantara lines the A pillars and headlining, while padded diamond stitched leather covers the doors and seats. Its luxury at its finest…rather pricey at a 5k premium but it looks the part! 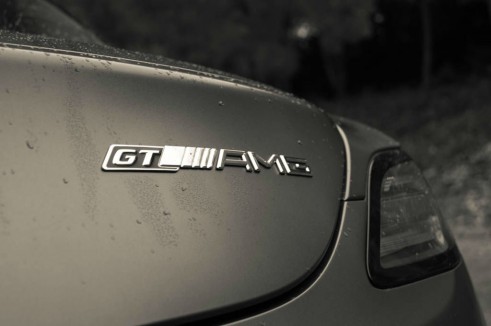 Mercedes’s SLS is the daddy of GT cars in my eyes . It has traffic stopping looks, mind boggling performance and a soundtrack to match.

Yes the price tag is pretty steep, but if you are in the market for that sort of car and have £165k burning a hole in your pocket, then forget the Bentley GT and spend another £10k to get the SLS, its sportier and better looking in every way possible. 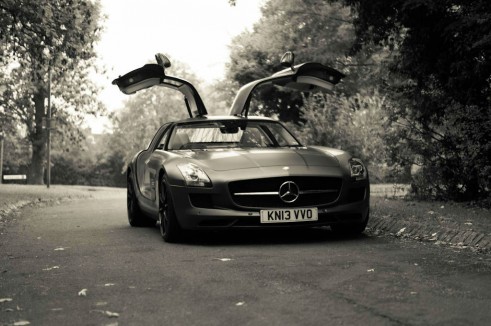 Jaguar F-Type Coupe In The Flesh

Want to go and explore the world? Check out Bridgestone Everywhere – Sponsored Post