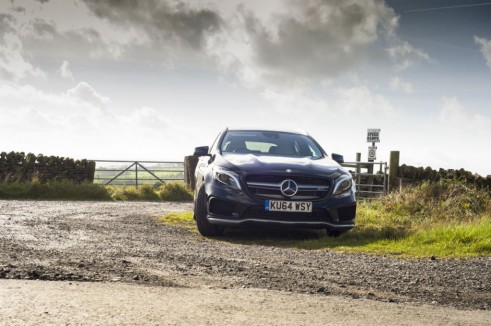 Let’s just start this review by making one thing clear, the GLA45 AMG is many things, great to look at, fast, immense fun, but, no matter how much Mercedes insists, it is not an SUV.

This is crossover territory, with only the slightest bit of crossing, 40mm to be precise, so seriously, no offroading please.

Now I’ve got that off my chest lets get down to business. 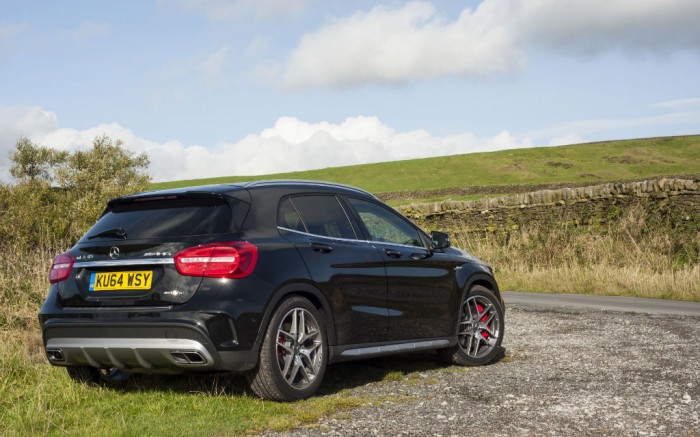 From the outside the addition of the letters G and L mean the GLA is a little taller then the standard A and comes with some more, shall we say, rugged features.

The A-class is a pretty car to start with, add some AMG and it just gets better, but, just like we found with Vauxhall’s Adam ROCKS Air the mini-SUV styling just makes it look even cooler.

You get a few additional bits of plastic under the door sills and around the back, even those minor additions make it look really great. Although sadly the one we drove didn’t have the stonking sports body kit we tried on the A45 AMG. 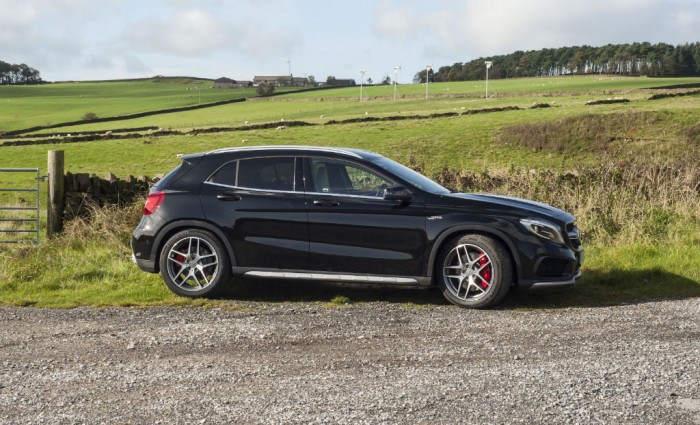 What it does have is some beautiful 19 inch AMG monikered alloys, to fill those bigger arches, and bright red callipers peaking out from inside, we’re sold.

AMG’s boffins have slashed 15mm from the GLA’s rideheight, again pulling it away from the SUV market, and that means it looks a little more squat on the road.

Inside it is the standard slightly drab A-class interior, but the addition of flashes of red and AMG badges practically everywhere give it the proper feel of a sporty Merc, and the alcantara lined wheel is a thing of beauty. 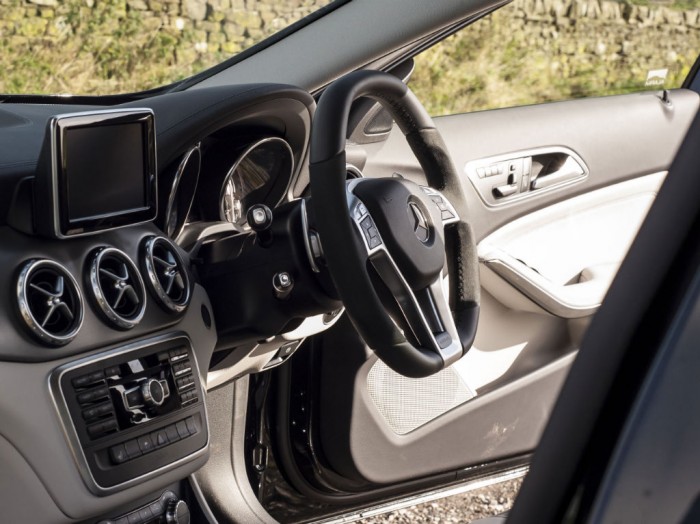 The sports seats are great too, tight, but not so firm that they become uncomfortable, they support you nicely while still adjusting at the touch of a button.

The back sees an increase in room over the A, spacious enough for those of us over six foot to spend a comfortable ride, although a rougher time due to sportier suspension should be expected.

Sticking with Mercedes trend of confusing names the ’45’ has a 2.0 litre engine, but fear not, that unit is an absolute cracker, pumping out 360 bhp and 400 nm of tarmac shredding torque.

It’s hooked up to a seven speed dual clutch gearbox, which rattles through the ratios nicely on it’s own, but the metal crafted paddles are just too tempting at times, especially with the wonderful overrun sound the GLA belts out, we could spend days downshifting. 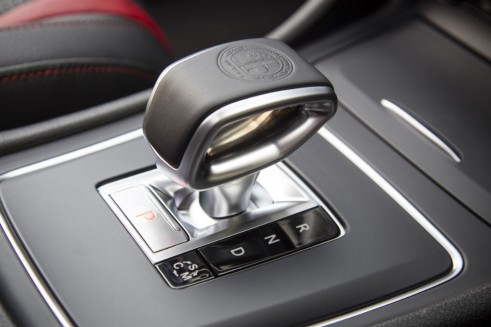 Start it up and the four inline cylinders crackle through an equal number of square, built in, exhausts.

It really is a great drive, put your foot down and, despite the added height and weight, the 45 will still rocket to 62mph in just 4.8 seconds – just 0.2 seconds slower than the A45.

That’s because despite being bigger than the standard A, the GL weighs just 40kg more. 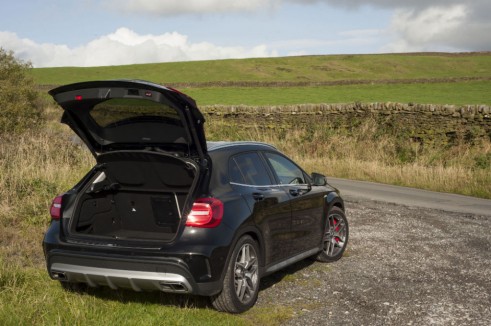 What it does change though is the ride, but only subtly. The A45 is a sharp and nimble little thing, always eager into the corners, the GLA chases its smaller brother hard, but pushing the centre of gravity north just adds a little roll.

The GLA is still brilliantly planted though, these twisty Yorkshire roads are no match for it and the 4MATIC all-wheel-drive system eats the miles up, even in the damp October conditions.

To achieve this AMG have beefed up the anti roll bars and set the car up to prdouce more grip than the standard car. 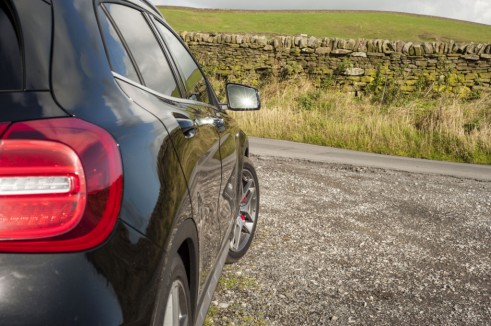 For all its drama the GLA can be very refined. Press the selector button a few times to slip into comfort and it becomes a nice cruising machine, slipping quietly over all but the very harshest of ridges.

AMG also bring in their speed sensitive variable electric steering system, the kind of system that sometimes means a worrying amount of unwanted numbness, not here.

Despite the variations the GLA retains a remarkable amount of feeling, for an alleged SUV you’re amazingly connected to the road.

While it can’t compete with the likes of Audi’s SQ3 or a Porsche Macan in the SUV stakes, and is even shorter than a Focus ST, the GLA is a fantastically good package. 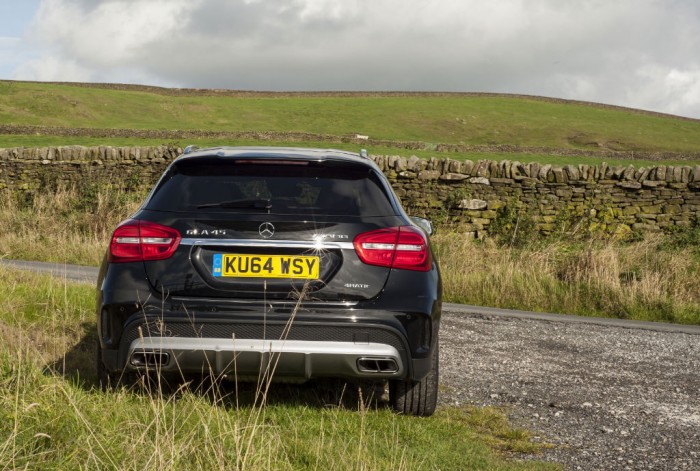 You do feel higher up in the road, especially when compared to the A, but nothing has had to be compromised.

If you have the rather heavy £44,595 the GLA45 AMG will set you back you will be buying it for the looks and the performance, the only problem is for that you could pick up a Macan S. 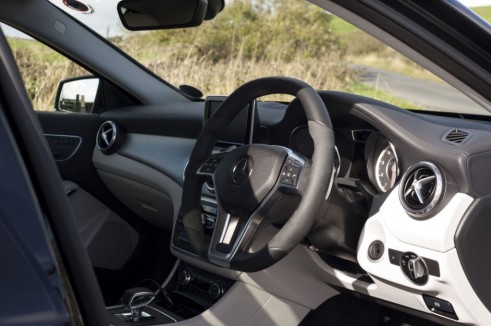 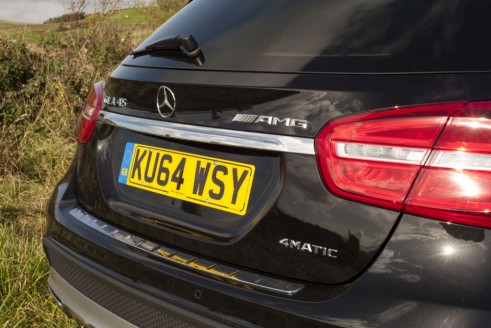 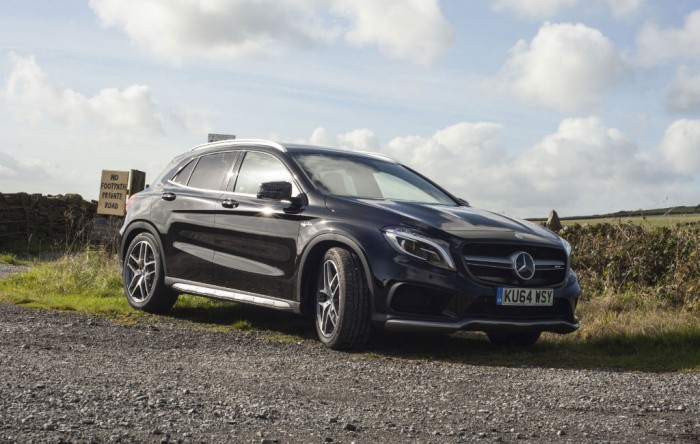 Mercedes Benz GLA45 AMG -Not an off roader, handles well for its height, ludicrous speed!