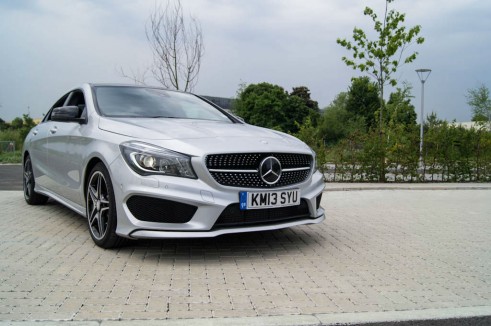 In AMG Sport spec prices start from £31,555 which is fairly steep when you think you can get an entry spec E class for a grand more! Our test car had been specced up with a hefty list of extras, making the total price £40,845….crazy money. 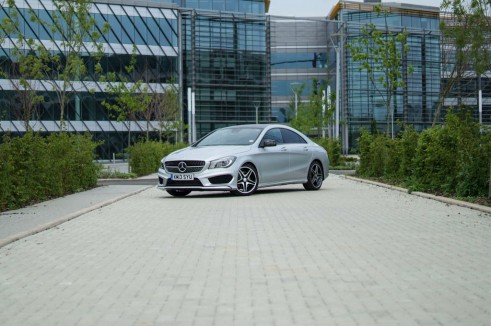 There is no doubt that the CLA is stunning, not as outlandish as the Concept Style Coupé that was released at the 2012 Beijing auto show, but it’s pretty close. The blunt nose front end melts into a long sloping bonnet, where it is met with the familiar CLS style swooping roofline. Along the sides athletic sculpted lines move from the front wings along to the rear doors, this is one feature that made the design cut from the concept. At the rear you’ll find a short stubby boot with a built in spoiler, the opal shaped rear lights pinch in the same as the CLS. 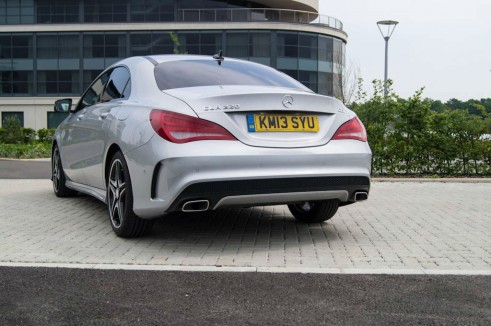 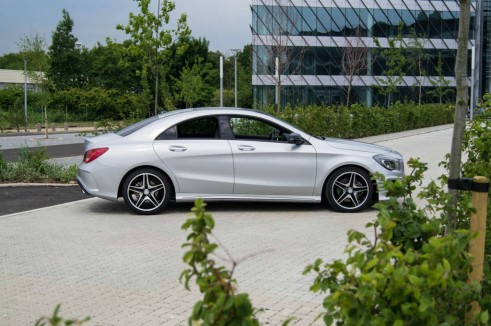 On the AMG Sport spec you benefit from exclusive front and rear bumpers, large intakes up front and the lovely 3D effect dotted grille; that was first seen on the A class last year. 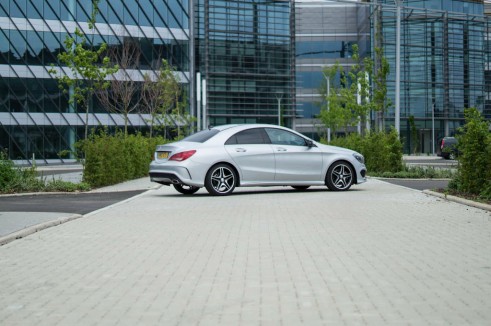 You may think that 170 HP isn’t much for a car the size of the CLA, but the 2.1 litre diesel is very nippy. It’s easily quick enough for most people, but if your felt wanting more Mercedes will be bringing out a 250 Petrol version, along with a full blown AMG model in the near future.

Put the CLA into sport mode, and the 7 speed DCT gearbox holds onto the revs longer before changing gear, it can occasionally lag slightly when you don’t want it too, but overall it copes pretty well. With 350 Nm of torque going through the front wheels you can get some spin in damp conditions, but the wheels soon find grip.

For a diesel the engine sound is rather sporty, it has a raw harsh sound to it, especially when in sport mode. Push the CLA a bit too far and it will start to understeer as the rear scrabbles round, up until that point though the grip is brilliant, easily comparable to the A250 sport.

Steering is pretty dead of centre, there’s not a lot of feeling at all, which is a shame given the “sport” title of this model. Road noise at 70 MPH is rather loud, due to the larger, wider 225/40 18 inch AMG alloys; we found the road noise to be a lot less in the standard 220 CDI.

There are two types of chassis setup; Comfort, and Sport. We have driven both setups and the comfort is the better option, Lumps and bumps in the road where a lot softer, and the ride felt more stable. With the Sport chassis everything becomes a little louder and unfortunately crashy, you really feel it when you hit a drain, or a pot hole. Unfortunately the AMG Sport model doesn’t have the choice of chassis like the rest of the range, but Mercedes may be doing a U turn on that. 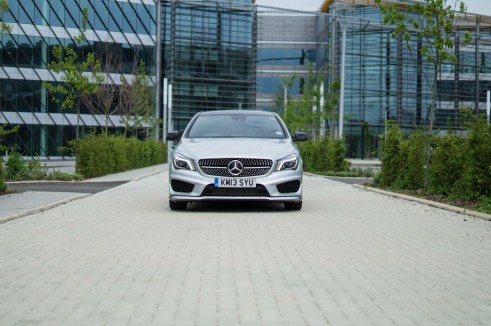 Inside the CLA you’ll find the same layout as the A and B class, which isn’t a bad thing but something a bit more exclusive would have been nicer. A plastic brushed aluminium effect panel runs along the dash, punctured by the very smart propeller air vents, red stitching, and suede sports seats sets this model apart from the basic Sport trim.

We loved the seats in the A class and it’s no change here, they are comfy and hold you well, while adding a bucket seat look to the interior. 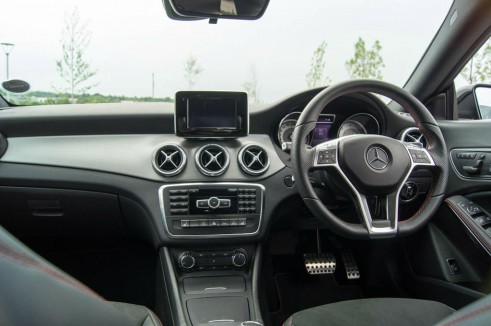 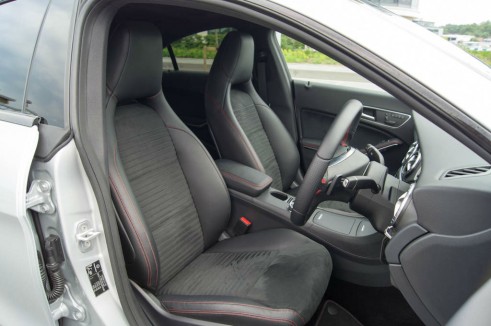 Centre console trim is a tad plasticy and cheap, we seemed to notice this more so in the CLA than the A class. Once again the sat nav touch screen just looks odd, it sticks out of the dash like a strange growth which can’t be adjusted at all. And yes it’s still annoying that you have to navigate around the menus with a cheapo plasticy knob in the centre console, iDrive this is not! Just make it a touchscreen!

There are some sharp plastic edges too, where the dash meets the centre console, not very quality for a model starting at £25k. 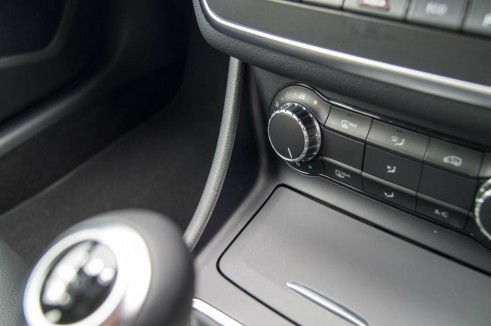 Rear head room is tight, anyone 6ft or over will struggle, the same goes for the legroom. With the seat about half way forward and at 5ft 10 my knees where touching the back of the seat. With the door closed, and having those wide large seats up front it’s all a bit claustrophobic. 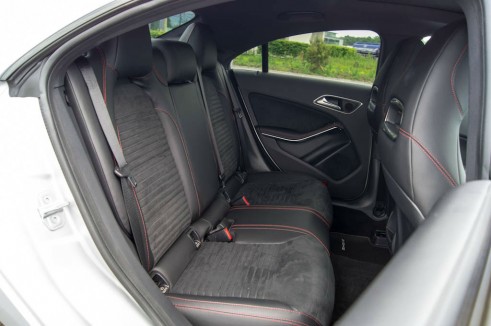 Boot space is very good though, at 470 litres it’s nearly comparable to a C class. The entrance is a little narrow, but the 1/3, 2/3 split rear seats will help with longer objects. 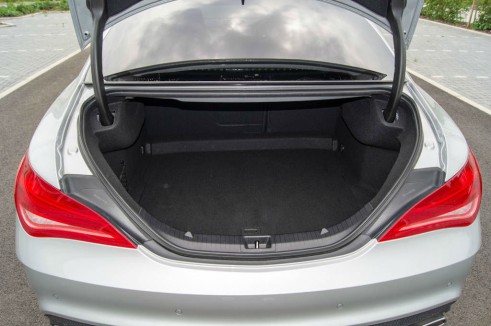 Overall the CLA is an impressive car, AMG Sport spec makes the car a lot more desirable externally. But in normal Sport trim the car is still stunning to look at.

The 220 diesel engine is the one to go for, it has a lot of poke about it. We also drove the 180 petrol which is a 1.6 turbo engine, with 122 HP it felt a little lacking toward higher speeds.

Starting at £25k you get the same interior as the A class which is about £6k cheaper, so premium quality you aren’t getting; it’s a shame as we think the interior could be a lot better, and less generic. But if you haven’t been in the other Mercs you’d be more than happy with it.

Rear headroom really does let the CLA down though, it’s purely down to that CLS style swooping roofline, but it does rather limit the cars ability. Mercedes will sell them by the shed load on looks alone, but if you don’t need a big boot, and decent rear legroom; the sensible choice would be the A class. 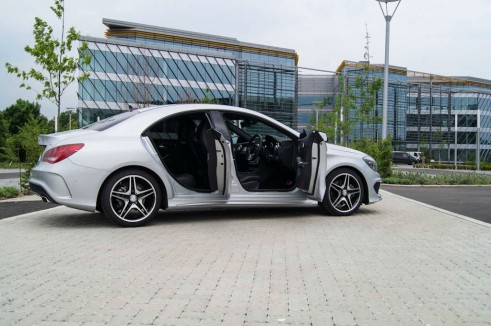