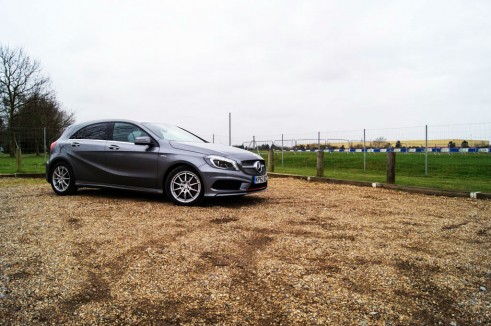 Mercedes have recently released a full blown AMG version of its new A class, the A45 AMG, it costs upward of 36K, and has 355BHP. But what about Mercs other hot hatch offering? We recently tested the A250 Sport “Engineered By AMG”, and priced from £28, 800 it’s a darn sight cheaper than the A45 AMG.

Firstly with the massive list of extras slapped on our test car, it ended up costing……£39k, but to be honest the only extra I would add to the car is the Harman Kardon surround sound at £680. 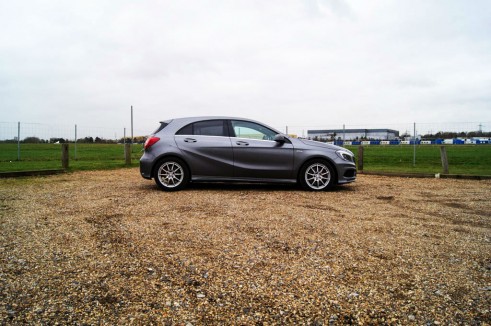 I love the look of the new A class, it’s a 100% improvement over the old, tall, upright model. The low down squat physique, and snubby front end really make it look compact. I particularly love the grille on the A250, the Mercedes badge is circled by pointed ovals that get ever closer together the further they are from the centre. It’s really different, something I have never seen before and it looks stunning. This “Engineered by AMG” edition adds some nice bulges at the rear, bigger 18” alloys, a low front spoiler and side skirts, which makes the car look very aggressive, red accents at the front and rear give away this cars potential.

The only thing to gripe about is some hideously unclassy “Sport” badges on each front wing. A subtle “Engineered by AMG” would have looked so much better. 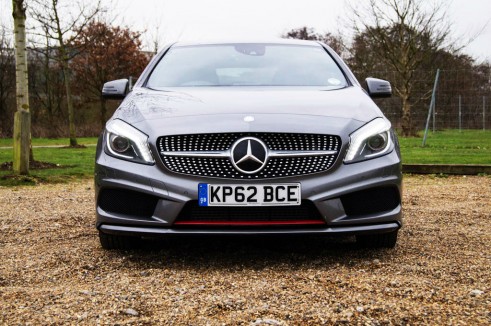 211HP from a 2 litre petrol turbo charged engine isn’t massively impressive! However facts and figures on paper can be deceiving and with 350Nm of torque…this thing is quick! In normal driving mode its fast, but when you put it into Sport mode it really fly’s!

In this spec the AMG engineering doesn’t stop at the external body kit, the A250 has firmer dampers, stiffer springs and thicker anti-roll bars. All this gives the little A class tons of grip; even in the damp conditions we tested the car in you felt 100% confident chucking it into all manner of corners at speed.

Putting power down in the damp was occasionally tricky, especially with Sport mode on. There is so much torque that inevitably wheel spin will happen, but that’s all part of the fun. I imagine you would get through tyres pretty quickly if you owned one!

This car isn’t all about going fast though, when cruising along at 70 it’s very refined and comfy. You could easily soak up the miles on a long journey in this feisty little Merc. 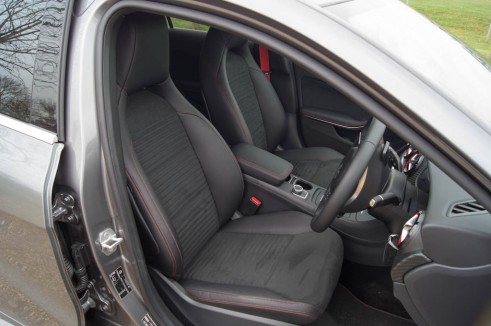 Inside, the A250 gets even better. As soon as you open the door you notice how stunning the seats are, trimmed in red stitched leather with Alcantara middles. The integrated headrests finish the look off. In the rear the same style of seats can be found but in bench form, it would be nice to have two individual rear seats though, it would add to the racey feel of the car. 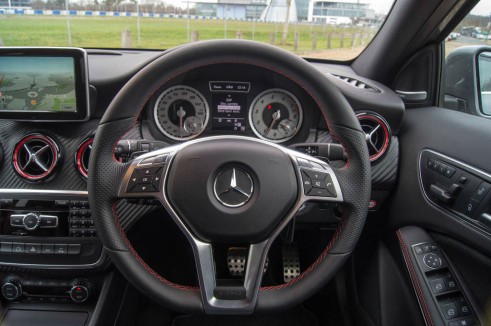 Carbon fibre look trim is used on the dash with brushed aluminium accents, and with the red detailed “propeller” air vents the interior is a very nice place to be. The only thing that is slightly odd, (and the same goes for the whole model range) is the Nav/Media Screen. It just looks a bit stuck on, the way it hangs there. It cant even be adjusted or tilted, which I find a bit strange too. One that rises out of the dash would have been a lot more aesthetically pleasing. 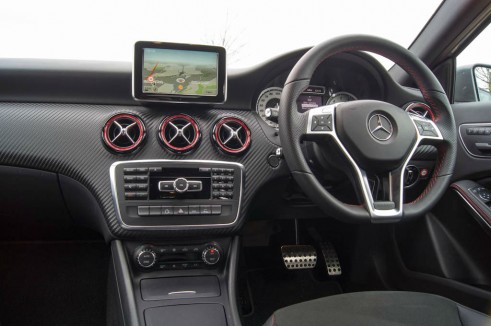 There is plenty of leg room in the back for two adults, the way the front chairs pinch in after the head rests really helps give extra space.

Boot space is pretty good at 341 litres, the rear seats also fold down if you need extra room. You might find the width of the boot opening a bit of an issue for larger items, as it is a little tight.

Sound wise the Harman Kardon 5.1 system was great, so clear even at higher volumes and with rich clear bass. It is a £680 option as I mentioned before, but its most definitely worth it. 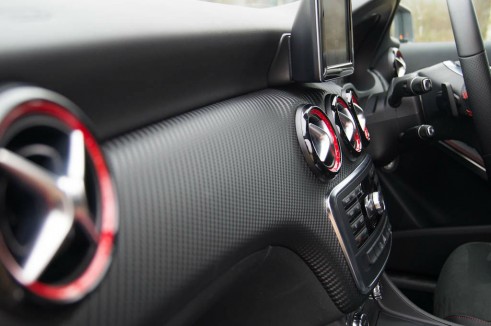 I really, really, like the A250, it is rather pricey at £28k but for that money you get a sporty, semi hot hatch, which does 0-62 in 6.6 seconds. A car comfy enough to use on long journeys, or the daily commute, and a car that can accommodate 4 adults with ease. It could easily be a family car too!

Id like to see how much more you could get out of the engine though, I think it could be capable of around 250BHP which would be even more impressive. We will have to wait and see what tuning companies can do with the A250.

As for the recently released A45 AMG, yes it is quicker with a 0-62 of 4.6 seconds; but you can own the great A250 right now, and for less money, so I’d rather forget about those 2 seconds!

Peugeot 208 GTi at the 24 hour Nürburgring