McLaren have been going from strength to strength of late, way back in 2010 the 12C brought road cars back to the fore. No longer were they a one trick pony, resigned to the history books.

Fast forward 6 years and oh how the times have changed.

They now have three very distinct segments in place, Sports, Super and Ultimate.

The newest member of the family is the 570, a first step into the world of McLaren. You can own an entry level C model for £126k – that’s 911 Turbo money. 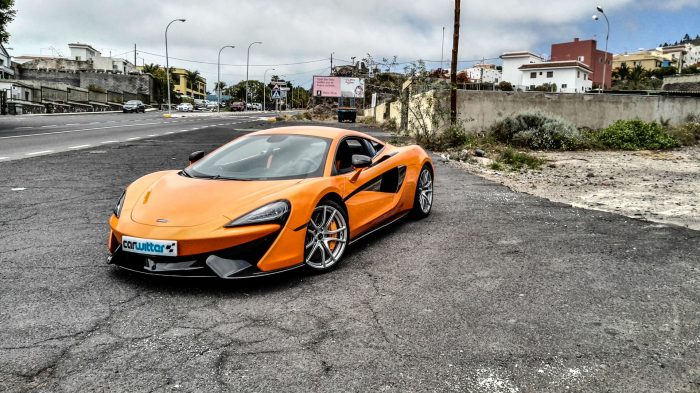 But if you were looking for a daily driver in that price range you would’ve been left wanting. After all, the 570S is a full blown sports car, take it through the twisting roads of Tenerife and you soon find how harsh it can be in every day conditions. A GT car it isn’t. 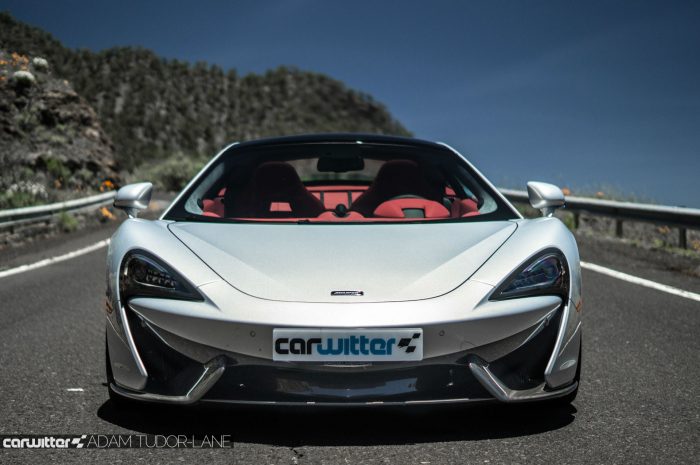 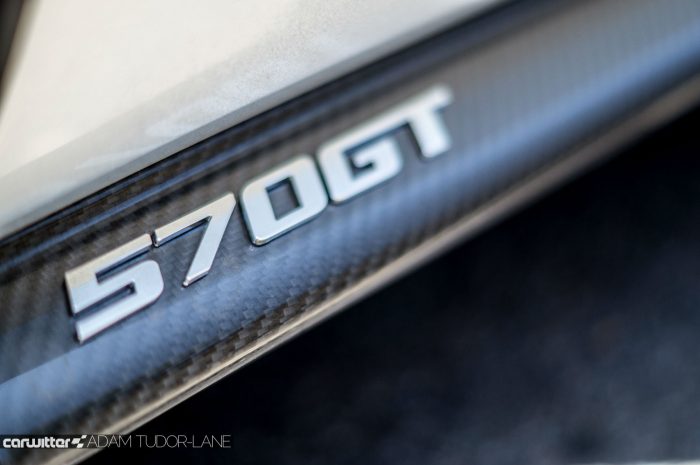 Enter stage left, the 570GT. The GT is aimed at buyers who will be purchasing a McLaren as their main car, rather than a weekend toy.

Starting at £154,000 in the UK, it offers superb value for money…but only if it can truly be that long legged GT cruiser McLaren are claiming.

Now the 570S is a stunner. It’s low, mean and those flying buttresses are the epitome of a supercar. How could this ever be improved upon for its bigger brother?!

Well, a complete redesign from the B pillar back, near enough.

From the front the two will look pretty much identical. Side on however the GT has a slightly higher roof line giving the cabin an airier feel – also aided by a fixed glass roof. 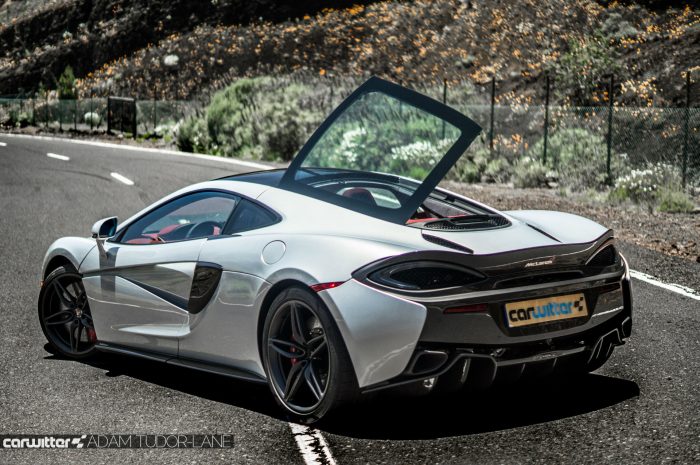 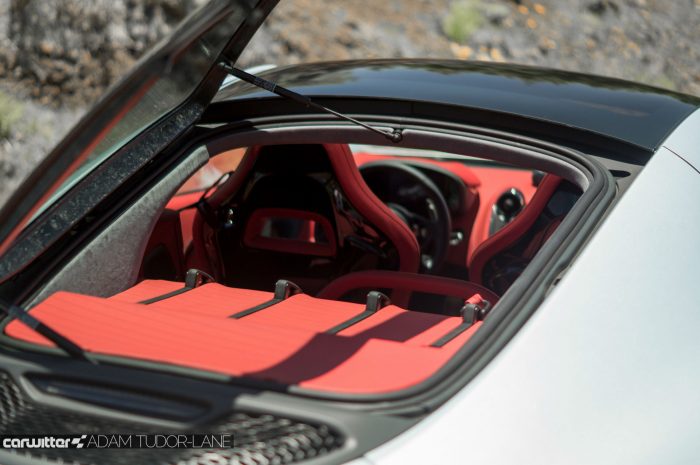 Most importantly though there is now a glass hatchback, incorporated into a totally re-sculpted rear end.

This is where the GT moniker comes into play. A leather lined touring deck gives an additional 220 litres of stowage space adding to the 150 litres up front. This gives the 570GT as much luggage capacity as a Ford Focus.

As much as I’m a fan of the flying buttress on the 570S, the GT is just stunning. It looks like a baby P1 to me. Slipperier, more complete in its looks. 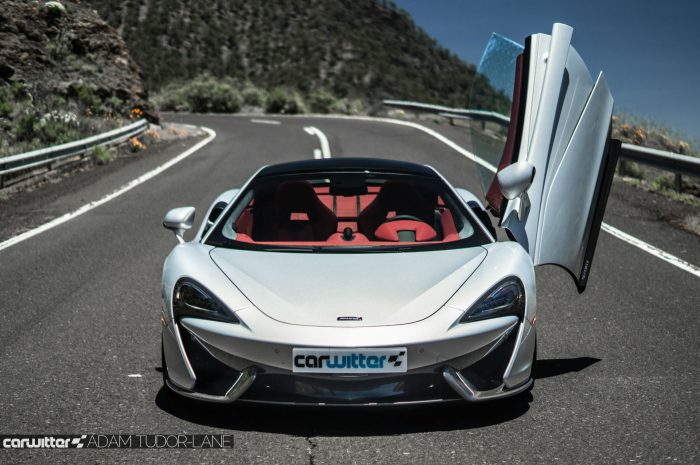 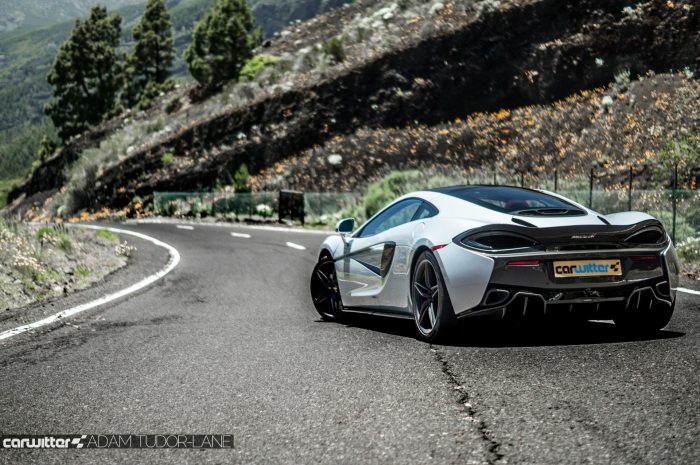 The first thing you notice when firing up the GT is the change in exhaust note over the S. It’s far less abrasive on the ears, more respectable. In fact, the Sports exhaust option for the GT is pretty much the 570S standard exhaust, everything on the GT has been dialled back…just a tad.

Hitting the open road and the first stretch included about half an hour of motorway driving. Switching the McLaren into Sport, for both its handling and gearbox we soon came across a rather unloved patch of tarmac.

Wondering if the GT was all talk we turned everything back to normal, within seconds the cabin shaking pits and troughs were gone. The ride became suitably smooth and comfortable. 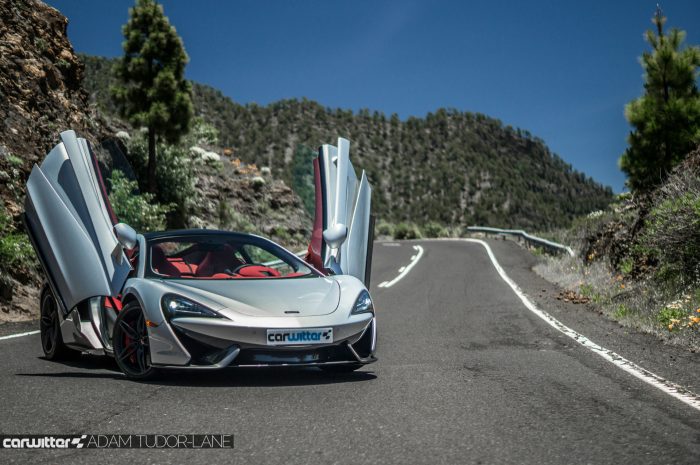 Gearbox in auto, the time ticked away along with the miles, until we hit the winding roads of Mount Teide.

Starting the ascent on the empty twisty stuff, we kicked everything into Sport and set the gearbox to manual.

Without a second thought the McLaren turned from a comfy motorway cruiser, into a corner carving behemoth. The pace of the turbo V8 is relentless. Even at the higher altitudes it kept up, delivering seamless acceleration and linear torque. 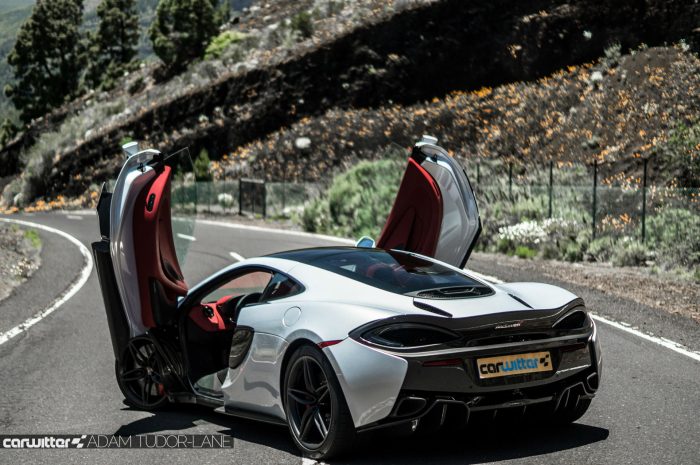 Turn in is still pin sharp and the GT finds grip in the tightest of corners. You think it’s going to start understeering and push wide, but it doesn’t. It just finds yet more grip and the tyres keep firmly stuck to the asphalt.

The ferocity that this thing accelerates with is easily on par with the the S, but the steel brakes aren’t as instant – naturally.

They hold on corner after corner without issue, there was no instance of brake fade even in the searing 30 degree heat. But the carbon ceramic’s just have that greater initial bite, they can also be optioned on the GT if you so desire. 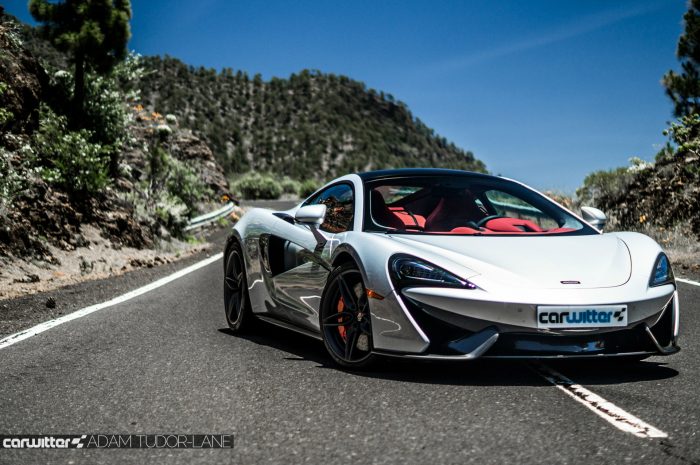 In it’s GT form the 570 still stays perfectly balanced, no weight shift is felt and the 562 BHP is transferred flawlessly through the rear wheels without drama.

If you get things wrong and manage to stack it, then you really have to have done something majorly wrong. The 570 is very manageable even when things are out of shape. Too quick into a corner, no problem. The car will scrub off the speed and still allow you to regain control, thanks to it’s bantamweight of just 1350 KG.

Inside is where you will really notice the difference between S and GT. Leather adorns every surface. Electrically adjustable heated seats, front and rear parking sensors, electric steering column – with easy entry and exit – and soft close doors are all now standard. 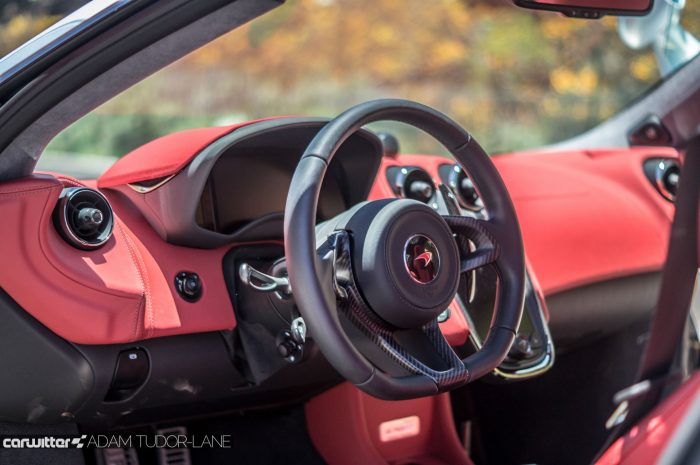 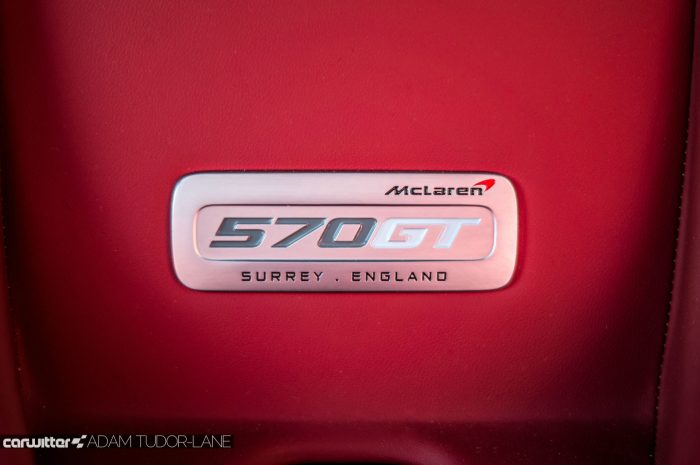 Our model was in it’s showcase trim, Ice silver with red leather interior. There are a selection of ‘By McLaren’ designer interiors which give you choices in both Luxury and Sport guises, or you can go full MSO and have whatever you like.

You also receive a bespoke eight speaker ‘McLaren Audio Plus’ system fitted as standard. There is the option of an even better Bowers & Wilkins 12 speaker set up with 1280 watts of power. 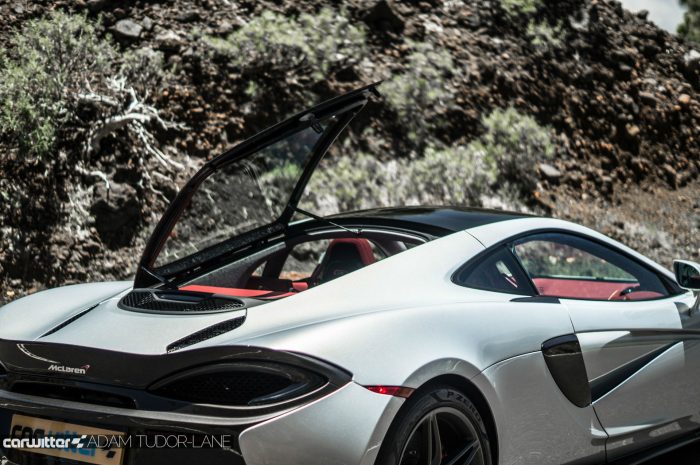 It’s a nice place to be, quiet enough thanks to that toned down exhaust and special foam filled Pirelli tyres, luxurious thanks to all the additional leather and the extra storage behind the now foldable front seats is just to die for. It harks back to cars of old.

Driving with our lunch in a wicker basket behind us felt distinctly vintage and very British.

The bespoke matching luggage that makes full use of the new touring deck is also gorgeous. 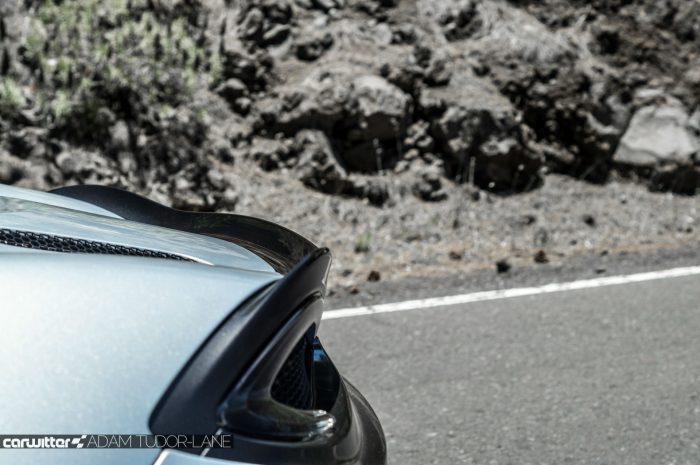 A lot of manufacturers over hype new additions, lamenting they are all things to all men and that a car is completely different in character.

So initially I had my doubts, and after spending half a day with a 570S I came away thinking ‘Christ they need to have drastically changed this car to be calling it a GT’.

I should have never doubted the guys in Woking, and I apologise for doing so. 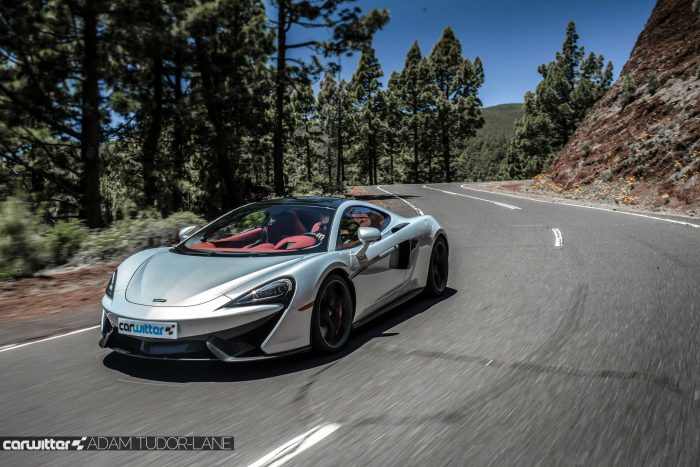 This car is what McLaren need. They will be used extensively by their owners.

Trips across Europe will be completed at weekends. Long stretches behind the wheel will still feel special, but nowhere near as taxing as they have been in McLarens of the past.

There was no competition between the S and the GT for me. The new looks are incredible, and feeling the difference between them it’s clear that you really can use the GT as a daily driver.

McLaren 570GT – New slippery looks, superbly well rounded, has to be the go to daily driver in the segment. 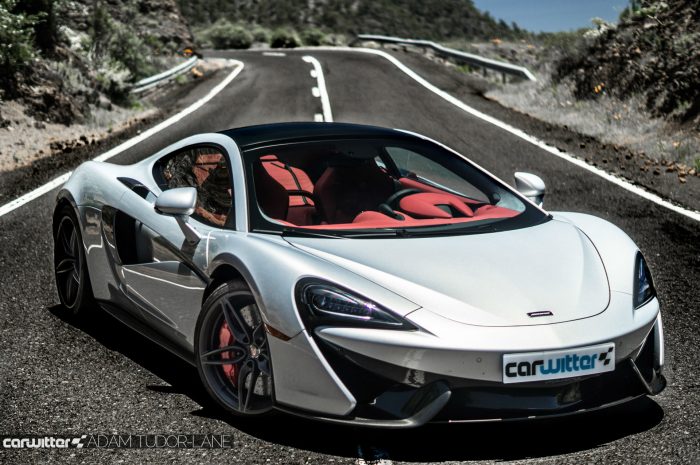 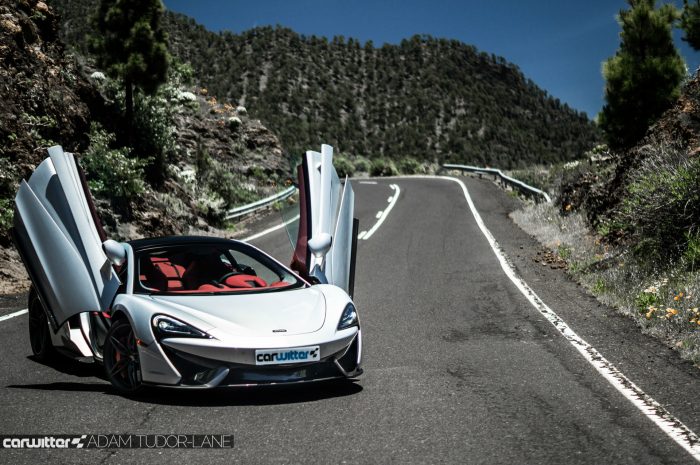 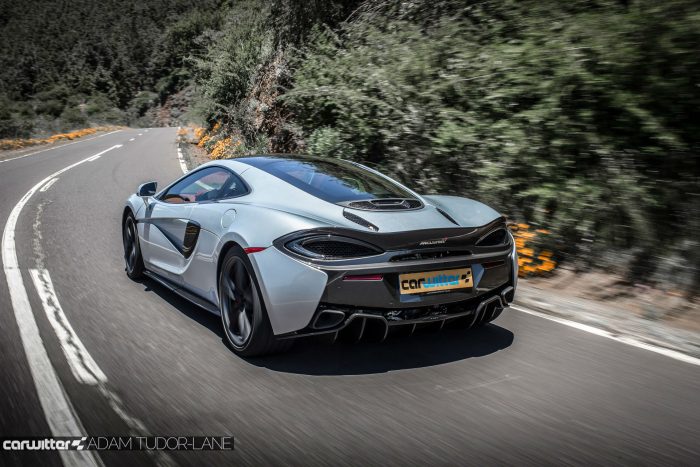 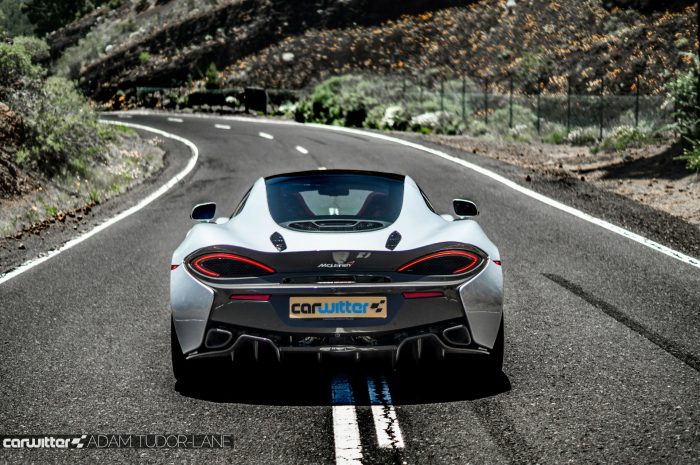