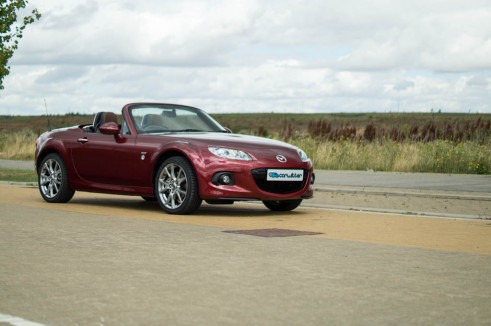 When mentioning the Mazda MX-5 you often hear the uneducated say the phrase ‘Hairdressers car’ so we thought we would see if they were right! 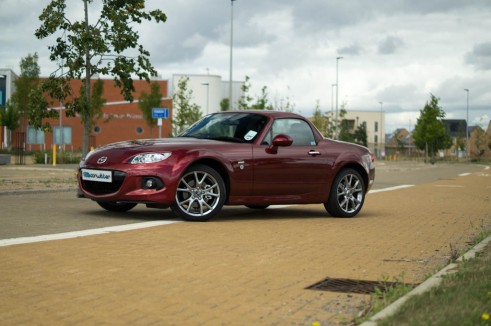 Whenever you see MX-5’s you primarily see soft tops, but the Roadster Coupe with its folding hard top caught our eye. It’s a little different, and adds a bit of refinement over its fabric roofed brother.

Mazda released this facelift MX-5 back in 2008, not a lot has changed since then. Some minor alterations to trim pieces and lights, but that’s about it. It is however a very good looking car, its low, long front bonnet has a muscular bulge down the middle. Prominent extended wheel arches make the MX-5 look meaner and wider. An almost horizontal waistline gives the car a sleek appearance, which is finished off with a rounded rear end. 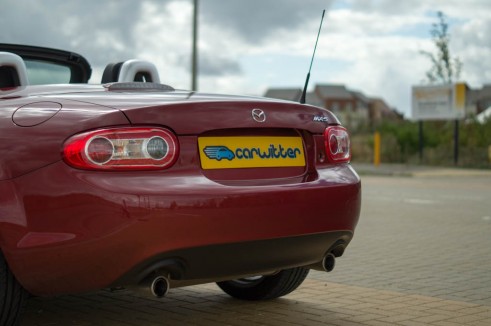 The only thing I had to moan about was the 80’s style aerial sticking out of its right haunch, surely this could be a smart little shark fin by the third brake light, or even built in to the hardtop?

Whether the roof is up, or down it’s a smart, sporty looker. Ok, hairdressers may like the way it looks… 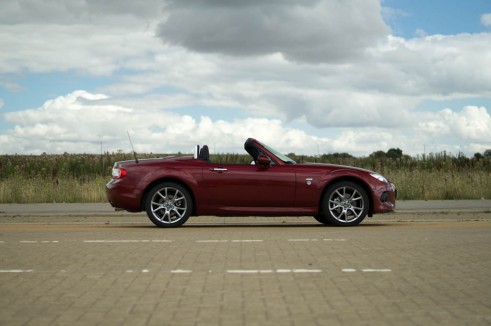 The only real comparable car in this segment has to be Toyota’s GT86, even though it isn’t a convertible (yet) it’s a relatively cheap, rear wheel drive, ‘driver’s’ car. Having driven one in the past I can safely say the MX-5 is more of a handful, you have to respect it. Unlike the GT86 you can’t throw it round a corner, let it slide, and effortlessly catch it. You can do it to a certain degree, but if you overcook it too much it snaps back, hard! You get to learn the limits pretty quickly, but you certainly have to respect the little Mazda. 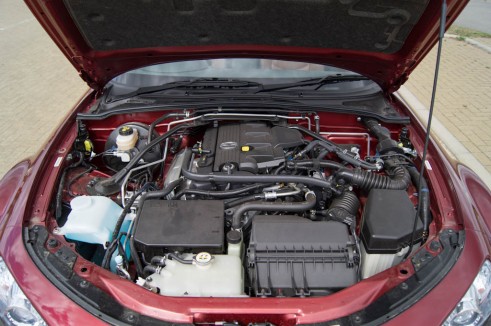 Acceleration is great through all the gears, smooth and rather torquey. You can easily leave it in 4th sitting about 4,000 RPM and have a blast along some B roads. Put the MX5 into 6th for some motorway cruising and the engine noise settles right down, with the hardtop up it’s really rather refined.

But when you’re accelerating along those B roads you’ll certainly want to be topless! Until around 3,000 RPM the engine and exhaust sound pretty relaxed and informal, after that, and all the way onto 7,000 it roars. We couldn’t fault the engine at all, 157 BHP is certainly enough in this 1132 KG lightweight. 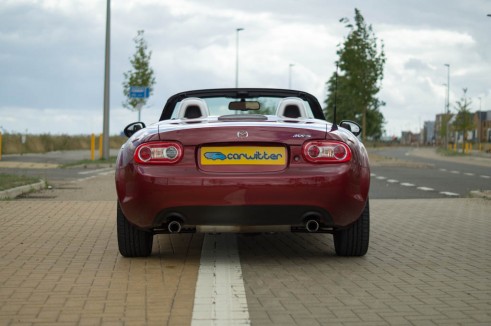 Cornering is excellent, the back end digs in and shoves you round with ease. Leave the ESP on and you’ll get a little wobble if it loses traction, before the Mazda straightens itself back up. At higher speeds the steering gets a little light and fidgety, on the other hand low speeds it’s rather heavy.

Gear changes are short in the tight ‘box, and a blip of the throttle sees you shoot halfway through the rev range, there’s no doubt that this isn’t a car for the average hairdresser! 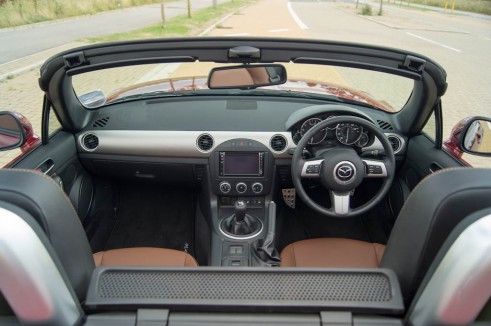 Inside the MX-5 everything is functional, there’s no real luxury at all, which isn’t always a bad thing as it keeps you focussed on the driving ambiance. Some of the switches look a bit like afterthoughts, and you would think they could have made them look just a tad prettier when you are paying nearly £23k. 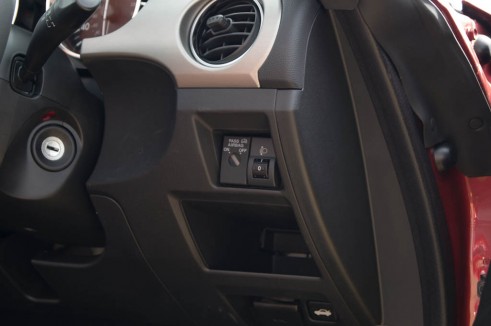 The seats are comfy and hold you well, ours were swathed in brown leather which was actually really nice. Matching door cards completed the look. 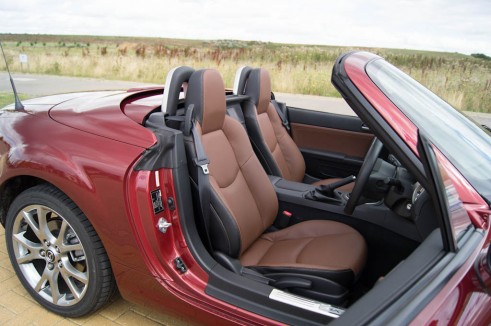 With the Venture spec you get Sat Nav as standard, it’s a TomTom unit so works great. Menus are precise, and large buttons make it easy to use on the move. Volume and audio source can be controlled via the steering wheel. There’s an AUX input but no USB, so you are stuck with changing tracks manually if you have an iPod. 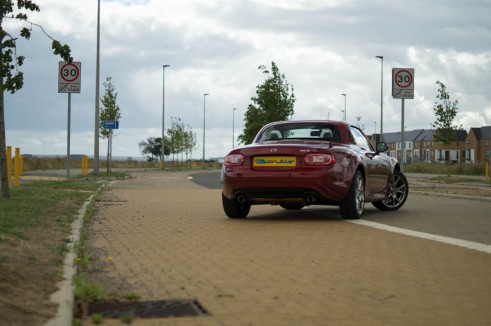 To raise or lower the roof there are two push buttons on the dash. Simply unlatch the roof then press the retract button, for some reason you have to keep holding this down until the car beeps at you, the same thing happens for when you want to put the roof up. I don’t know why you can’t just press it once and let it do the rest itself? Oh and you can only put the roof up, or down when you are stationary…in neutral.

We have two gripes about the interior…the two central dash vents don’t close, but the outer two do? Granted it’s not a make or break if you’re thinking of buying an MX-5, but it’s an annoyance for me, just make them all do the same thing! 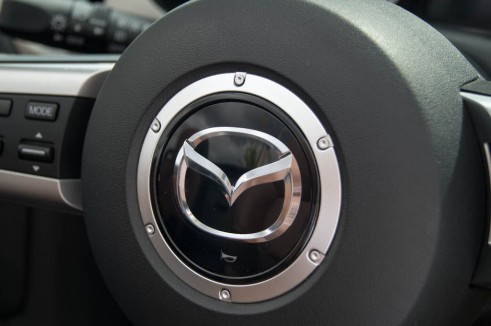 Another is the plastic trim surrounding the horn on the steering wheel, it has small mock allen key bolts around the outside. They are fake and just pointless, if you are going to do something like that do it properly, or don’t do it at all. 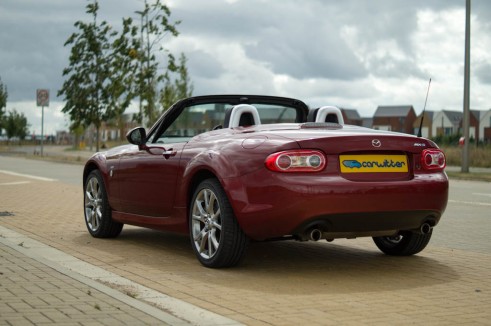 So is the MX-5 a ‘Hairdressers car’? Most definitely not! It’s a car for petrol heads, who want a no holds barred, rear wheel drive, wind in your hair, pure drivers car.

We would opt for the Roadster Coupe hardtop version, it makes the MX5 a better all-rounder, especially if you’re going to travel long distances.

Mazda’s MX-5 is a ton of fun, it grips to the road like nothing I’ve ever driven, and it really epitomises the phrase ‘Go-Kart handling’. 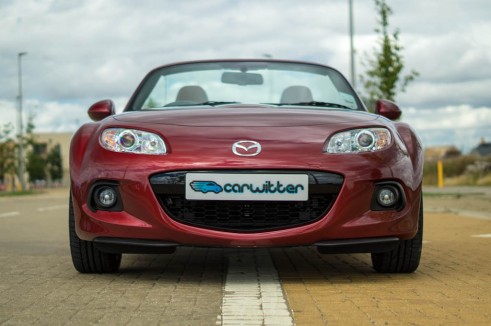