The B SUV is a relatively young breed that owes much to the larger Freelander sized soft roaders, and the generic B and C segment hatchbacks that have permeated the market for some time.

For it’s youth, the B SUV has been a veritable explosive success with the likes of the Nissan Juke, Vauxhall Mokka and the Renault Captur striding out of showrooms with little pause.

It is natural then that a manufacturer with such veracious growth aspirations (and achievements) as Mazda should want a piece of the pie. The CX3 is their claim to a slice. 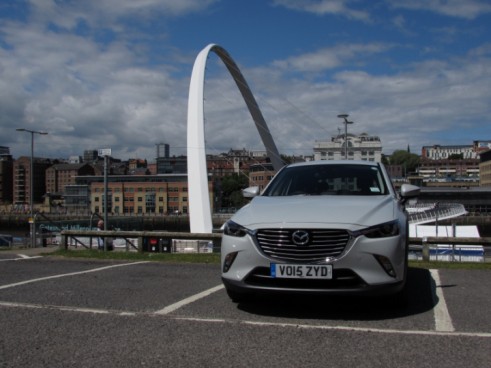 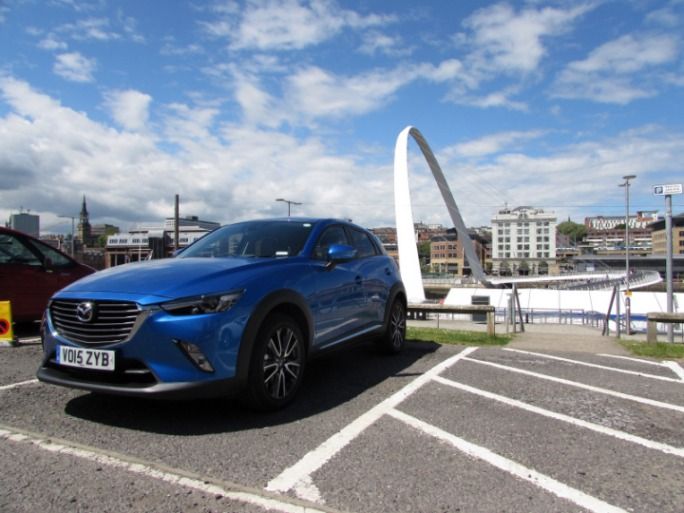 The CX3 is easy on the eyes combining that sleek “Kodo” design language of its siblings with a sturdier, taller, more muscular profile, imposing snout and chiselled bottom.

It makes no secret of the fact that it errs very much on the softer side of the B soft roader segment but with the sinewy muscular extroversion of more serious mud pluggers in all the right places.

It treads a satisfying and commendable middle ground between making the Juke look a bit too silly, and the Captur a bit too soft.

“Sport nav” specification – as well as getting you all the toys – brings along larger 18” alloy wheels, LED headlights and subtle chrome accenting which all help to further juice the already handsome look.. 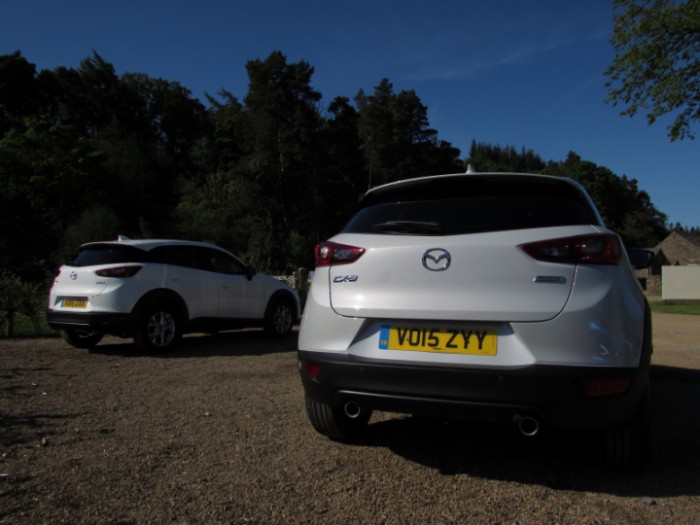 On the inside its all very familiar with the basic cabin architecture carrying over from it’s 2 supermini sibling and thats no bad thing.

You might argue that it could have done with its own interior identity: perhaps a more rugged take on the already accomplished driving environment of the 2, but it’s nothing to write in to the complaints department about.

If it aint broke, don’t fix it. 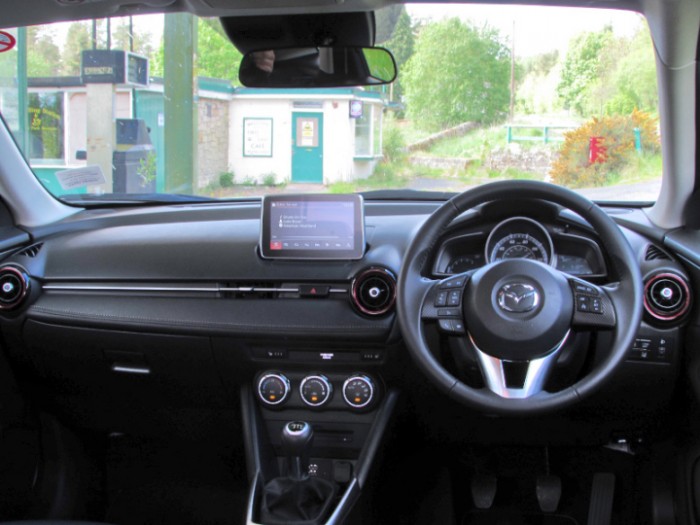 Where the interior experience steps on from the 2 is the visual purchase on your surroundings that the stockier SUV profile allows. Whether its just an illusion or not is hard to say, we’d need the two cars side by side, but the CX3 seems to permit a more watch tower like view out and welcome more light in.

Visibility is somewhat better too (one of the few gripes with the 2), but it’s still slightly marred by those distinctive exterior lines towards the rear. Something i’m sure would be easy to get used to with some extended usage.

Theres good space in the boot with dual storage zones afforded by a “floor” that can cover more valuable items, be lowered or removed for the full load capacity. The cabin itself is commodious too, with the rear passengers taking no compromises for comfortability or space even with the front seating fully extended. 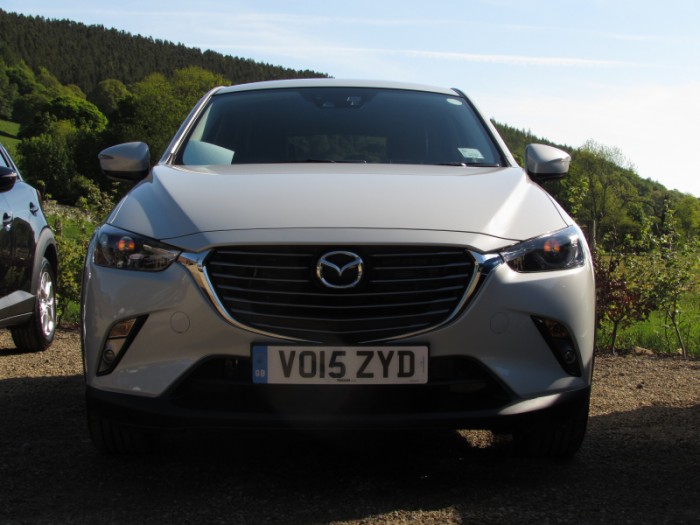 The trim levels are as follows: SE, SE-L and Sport Nav with class leading levels of standard fitment impressing right from the off.

Cruise control, air conditioning, the 7” touch screen with iPod and bluetooth integration and a DAB radio are amongst the long list of toys that you will not find a CX3 devoid of. AWD is an option for the full four by four brag.

SE-L trim adds automation to the lights and wipers. Lane departure warning and Smart City Braking are amongst the safety systems to come equipped too.

Sport Nav adds the aforementioned sporty exterior enhancements as well as a head up display, keyless entry a Bose sound system and more.

Its worth noting that for all the visual enhancement the bigger wheels afford, an equal amount of refinement is lopped off the ride quality. It’s down to the individual to prioritise. 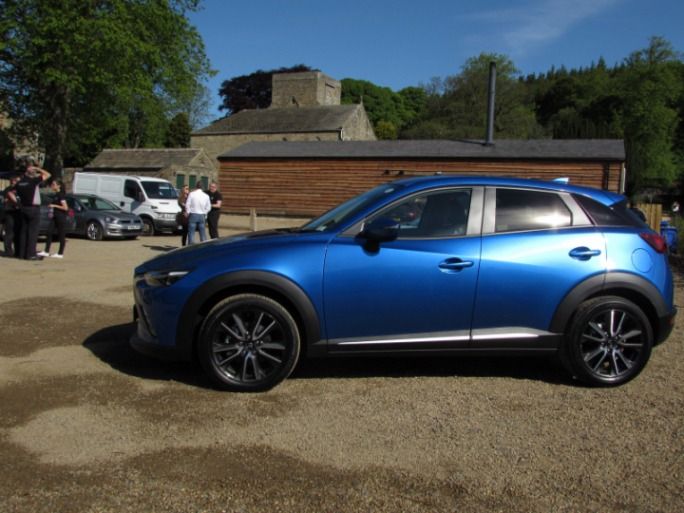 For top spec Sport Nav you can expect to shell out between £22,5 and £24,6 for respective petrol and diesel models which we can all agree is some serious wedge. It’s going to need to earn that kind of financial commitment. 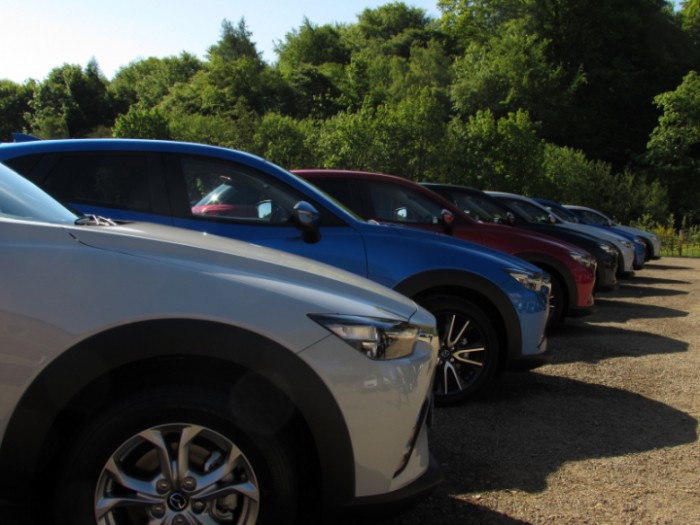 It makes a good go of it. The CX3, as with all of the other cars in Mazdas lineup, really comes into its own when you get going. The 2 supermini to which it owes much of its mechanicals and interior architecture, was a superb steer, and the CX3 is no different.

It seems odd to talk of a family car such as this and indeed its siblings in terms of driving dynamics, but feeling at ease behind the wheel at speed with a sense that the car is capable and comfortable is invaluable for its appeal.

An inherent balance runs fundamentally through the cars chassis set up and suspension action with the rippling swirls and undulations of the Cumbrian hills doing little to upset its composure.

A noteworthy dynamic disparity between CX3 and 2 is afforded by the extra ride height of the latter. Apparent additional suspension travel allows for greater body control and inertial messages when you launch the car into dips, but get too serious with your speed and the higher centre of gravity can make it feel aloof atop the crests that precede them.

The steering is nicely weighted and perfectly precise allowing confidence inspiring control at speed with superb manoeuvrability around town conversely. 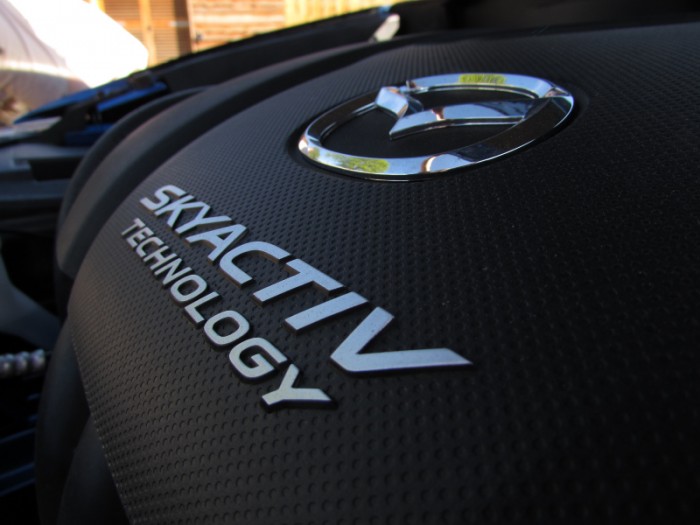 1.5 Skyactiv D diesel engines and 2.0 Skyactiv G petrols are available with the latter coming in 118 and 148bhp guises.

It is worth emphasising that the apparent excess in engine size compared to rivals does not come with the perceived inefficiency of higher capacity engines.

Mazdas Skyactiv powertrains are competitive in their consumption and C02 outputs, whilst providing near class leading performance and weight figures. 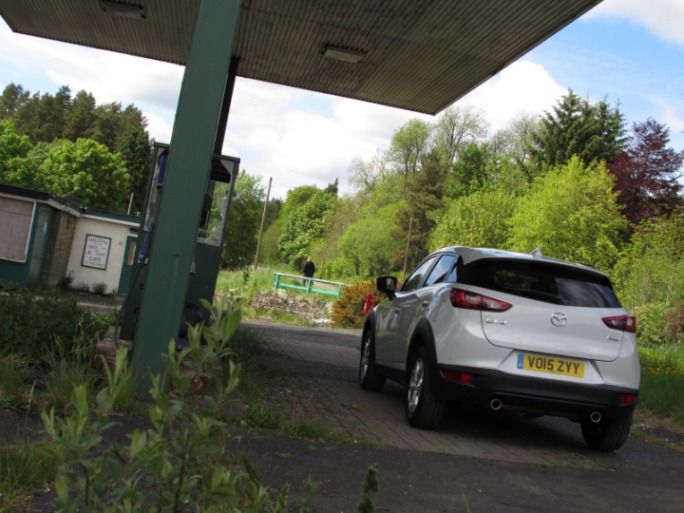 In practice both are excellent powertrains with the 1.5 diesel suiting the SUV character of the CX3 the best. The unit pulled well throughout its operating window and mated effectively with the 6 speed manual gearbox.

It also seemed exceptionally refined when not under notable strain which is a big commendation for an oil burner, although we do suspect a somewhat excessive level of tyre noise may have helped to disguise some of the usual diesel gruffness.

Nitpicks aside, the diesel is an accomplished, comfortable and reasonably refined long distance proposition.

The petrol is somewhat thrashier for its full offering but is conversely more satisfying to run through the revs and gears.

We rate it slightly lower than the diesel as that may not be relevant in day to day usage and the effortlessness with which the diesel achieves what the petrol labours for is worth extra commendation and our recommendation. 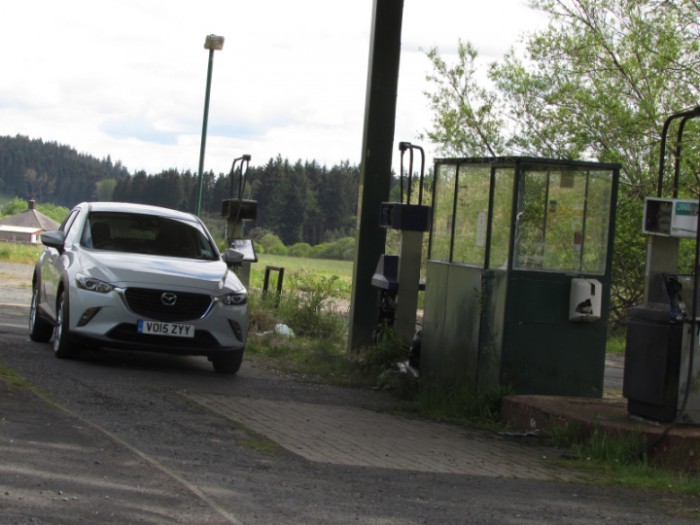 To conclude then we will waste no time in asserting the CX3 is yet another bullseye for Mazda.

Aesthetically it draws a perfect stylish and rugged compromise making its rivals look doughy, over styled, boring and some just downright ugly.

The cabin stays true to prior superb Mazda form and the powertrains remain strong as ever.

The CX3 in spite of sharing much with its siblings is an invaluable addition to the range bringing that unbeatable B segment SUV showroom appeal. 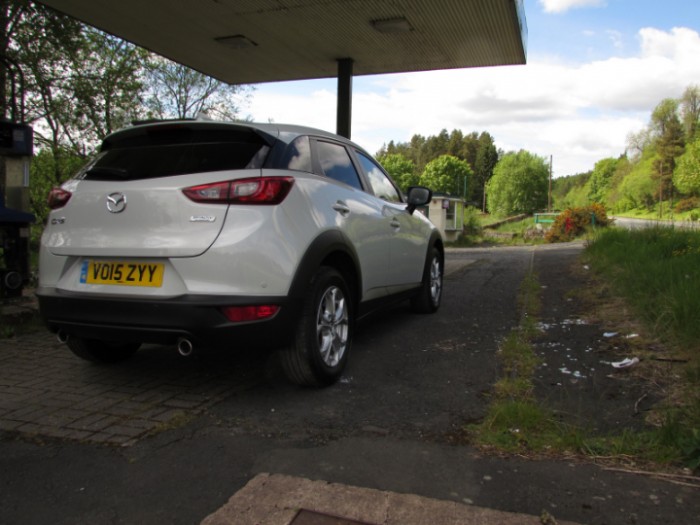 The only real question mark looms over that price point.

It stands somewhat more expensive than most of its key rivals, which is not unheard of for Mazda. That kind of confidence is something we’ve come to get used to of late, given the strength of their range.

Does it however, justify itself by comparison to some of its siblings?

A 2 will set you back a few thousand less at any equivalent level, and the 3 just about matches the CX3 but at a higher positioning in the range. All that being said, the unstoppable appeal of these mini SUVs will likely transcend 90% of customer reservations regarding price.

The CX3 really is a top quality all round package. Choose specification wisely, haggle and this champion of a family car is within reasonable grasp. 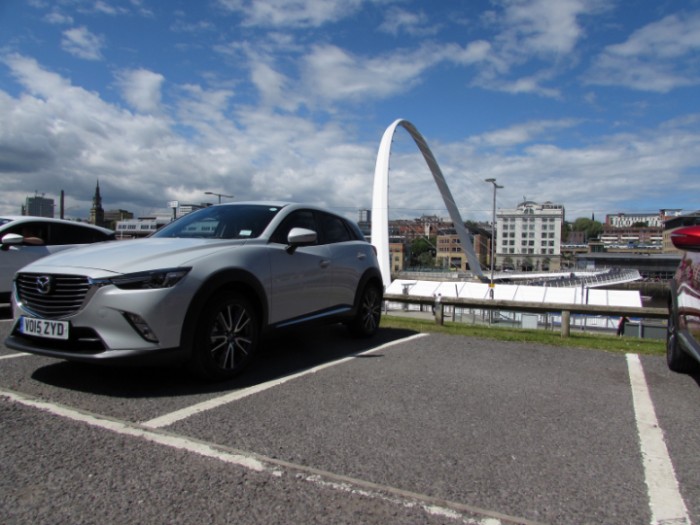