Although it’s now a little long in the tooth, we thought we’d take the current Mazda 2 for one last spin before replacement hits the streets next year.

Starting at £15,795 the Mazda 2 can seem pricey when compared to the likes of the Ford Fiesta but glance at the performance and kit levels between the two and you’ll soon find they’re toe to toe. 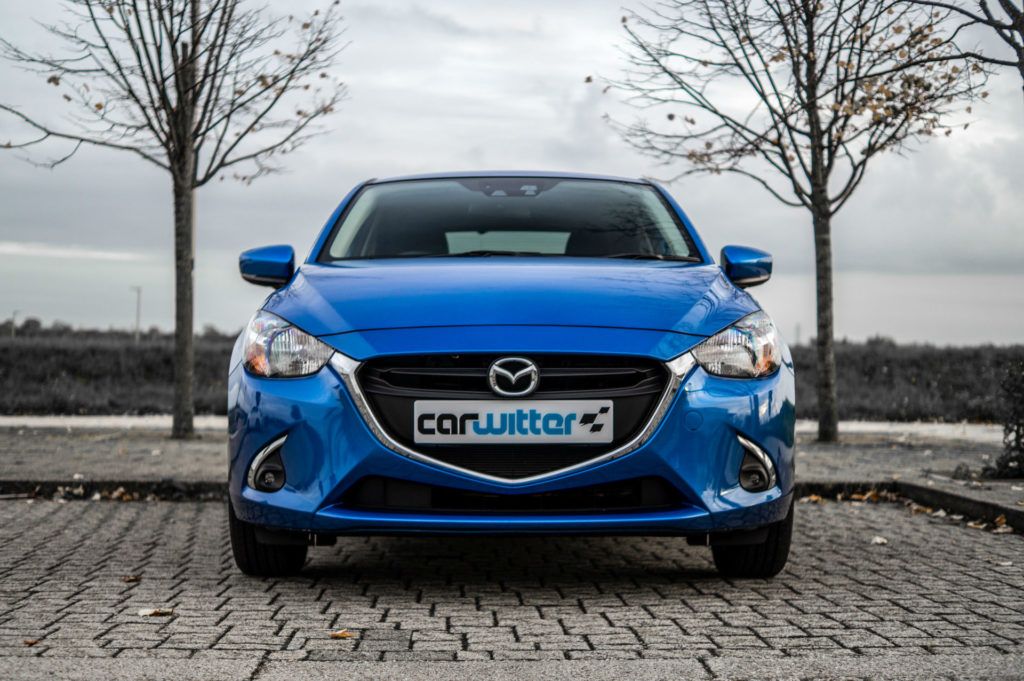 Little has changed since this gen was released way back in 2015. Over time the looks have become a little more chiselled and focussed.

The nose is more prominent and sticks out from the front grille to match the rest of the Mazda range.

One of the most significant omissions on this ‘Sport Black’ spec was the lack of daytime running lights, in fact, LED lighting was absent all around.

It’s something that can really change the look of a car and would have been nice to see on the 2. 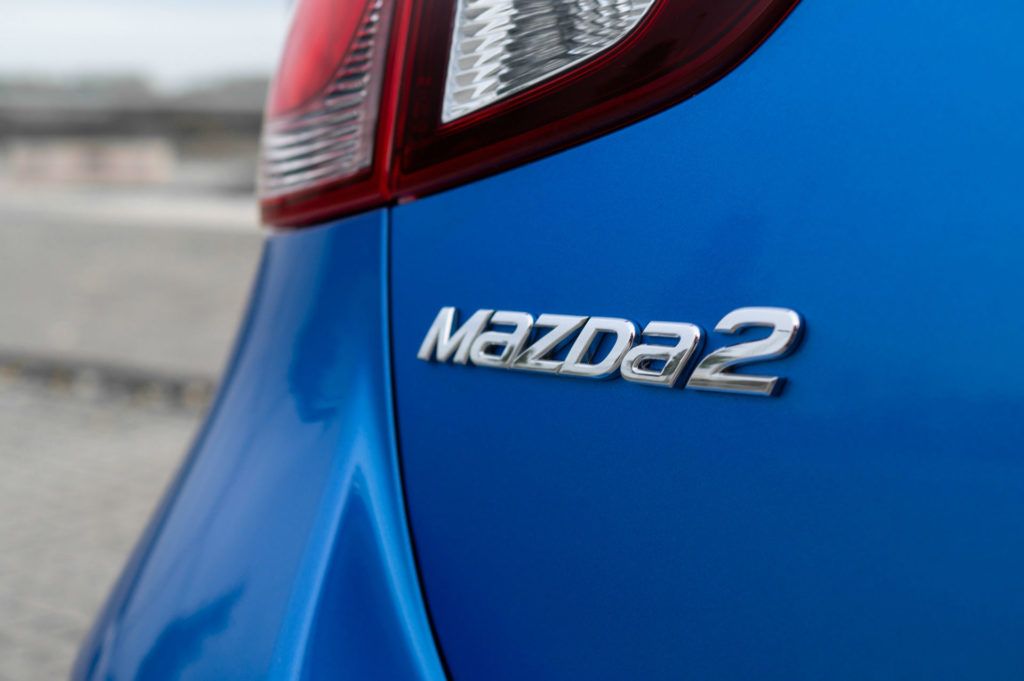 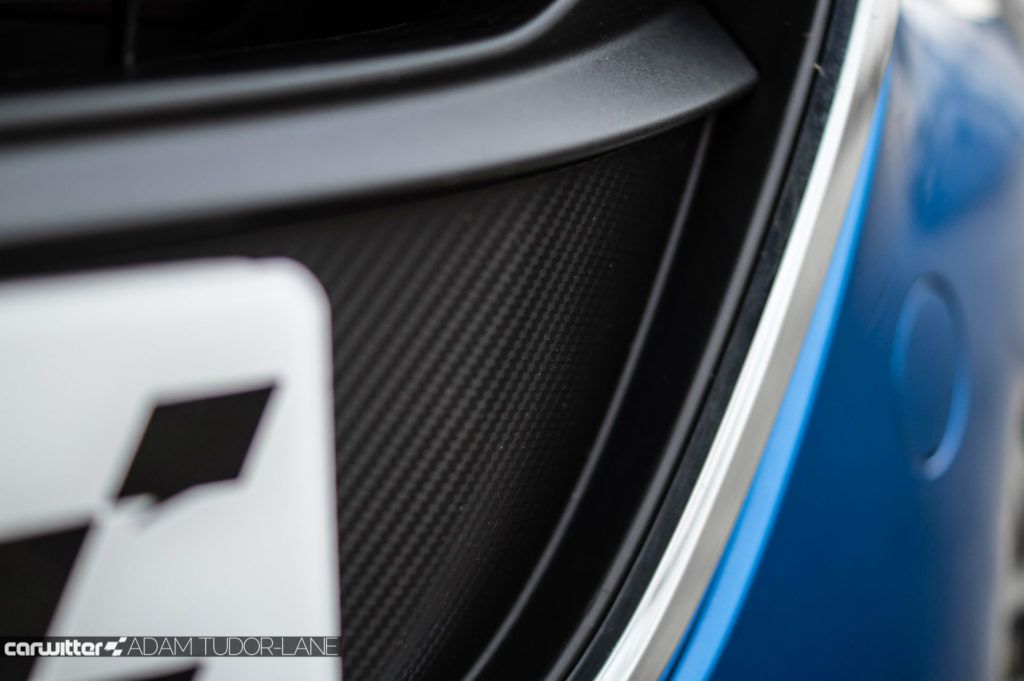 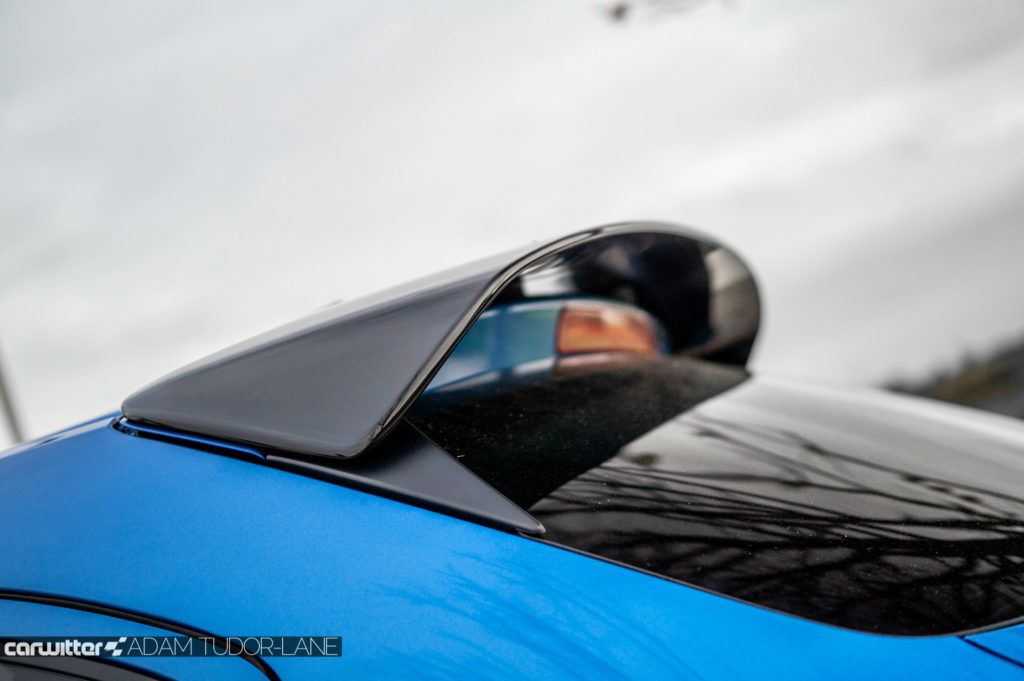 You can work the 2 and let it rev all the way to the red line, it doesn’t mind it, and on occasion, you need to wring it’s neck a bit to get the performance you need.

It’s not a bad thing, just don’t be scared to use it.On the other hand, if you keep the revs low and potter around town, you’ll return roughly 46 MPG, which isn’t half bad from a 1.5 litre.

It goes to show that downsizing isn’t always the right way to go for efficiency, ahem Ford. 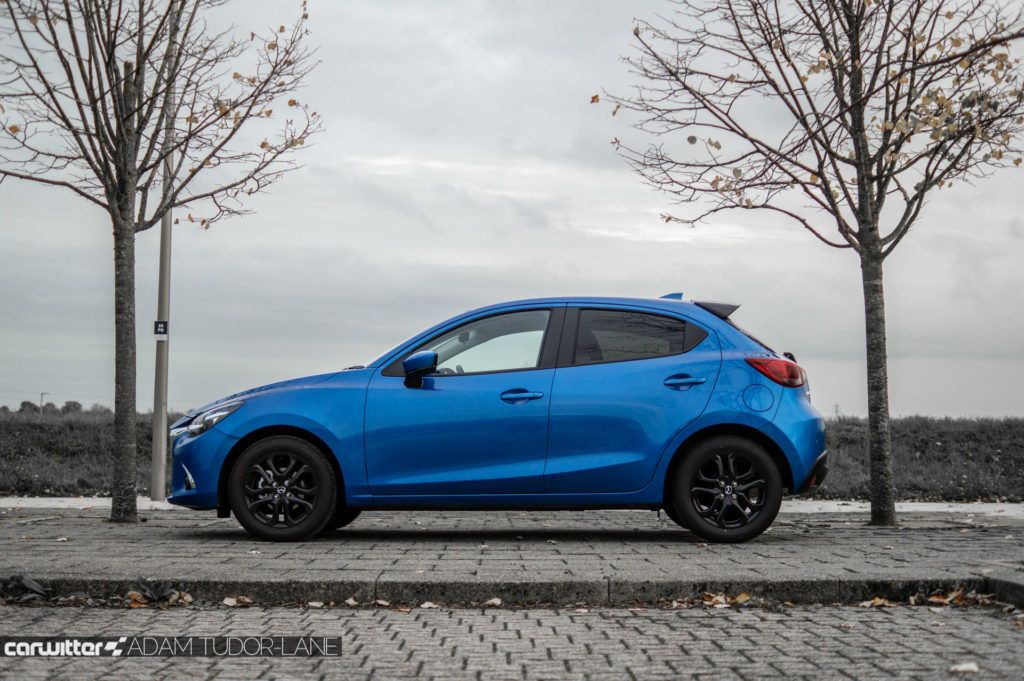 Mazda always seem to nail handling, the 2 is no exception. It feels like a small car should, turns in cleanly and can be played with if you want to.

The chunky tyres mean it soaks up any imperfections with ease and the slight body roll through corners adds to the Mazda’s fun, playful nature. 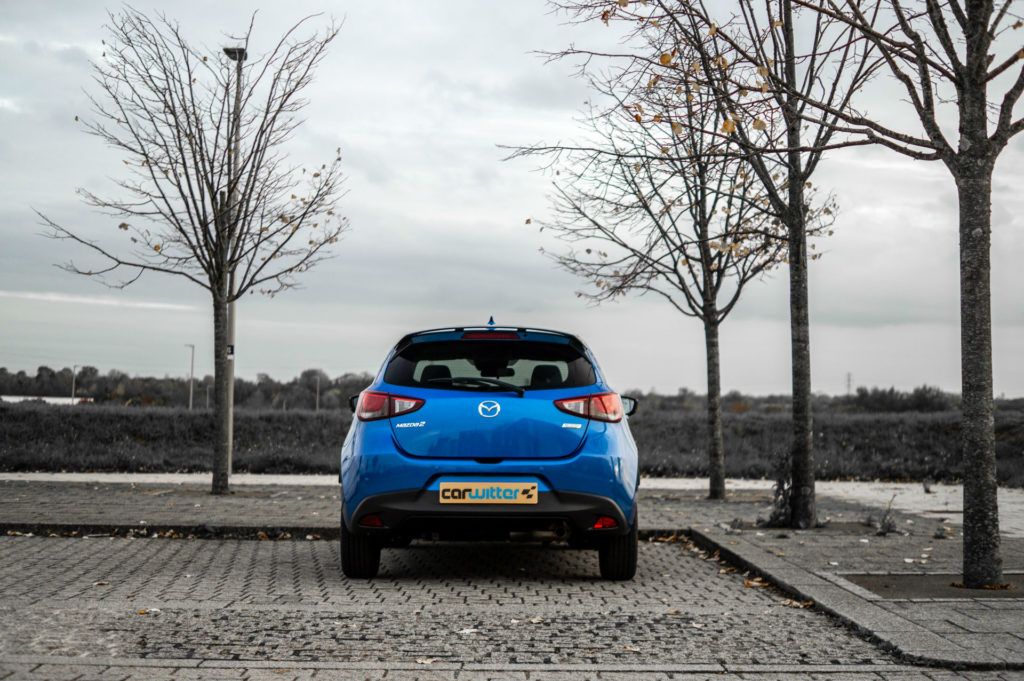 Ford’s Fiesta is often lauded as the perfect handling example of a small hatchback, but we’d have to disagree. The Mazda 2 is far more fun in almost every respect, now if only they did an ‘ST’ comparable rival…

Arguably a Polo or Fiesta will soak up imperfections better than this ‘Sport Black’ trim, but you’ll have to weigh up the pros and cons of dull handling vs ride comfort. 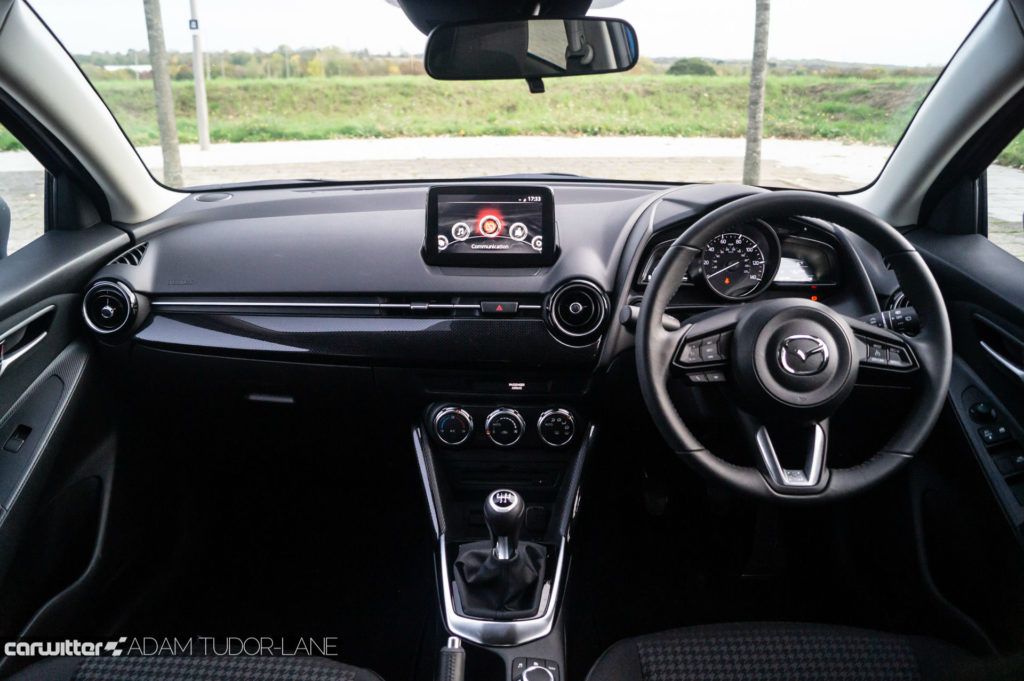 Inside a Mazda is always a nice place to be, decent quality dash plastics, well built and tactile switchgear. That goes for even this entry-level model.

Across the dash there’s a padded leather insert, the infotainment screen sprouts out from above. Rather oddly it’s too far away to be touched easily and doesn’t have touchscreen functionality, so it all has to be controlled by the small dial next to the handbrake. It’s an oddity you soon get used to. 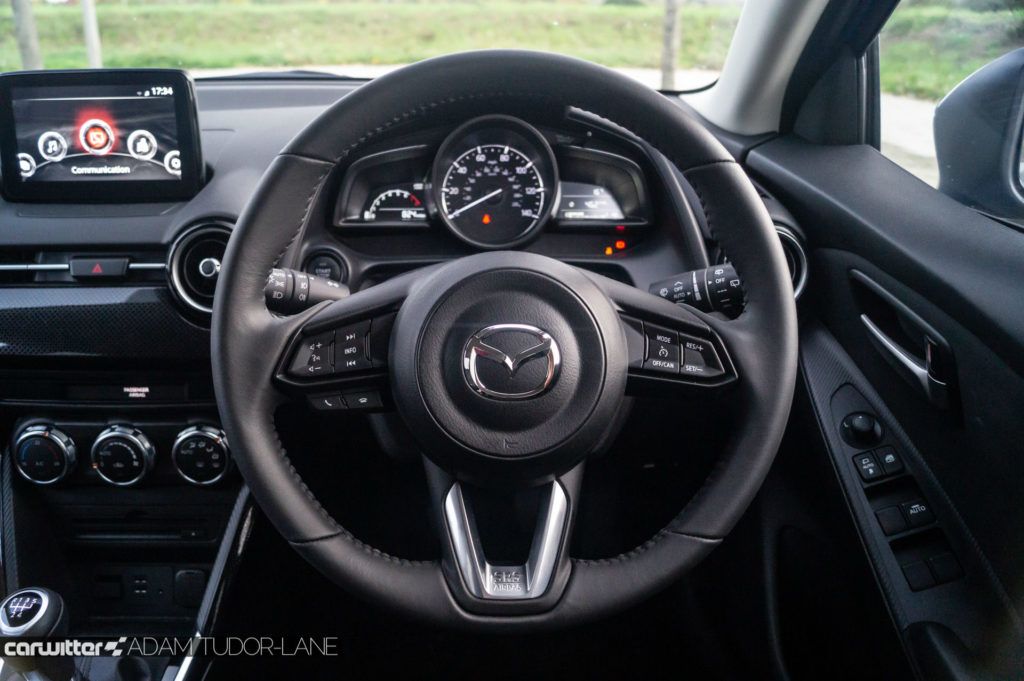 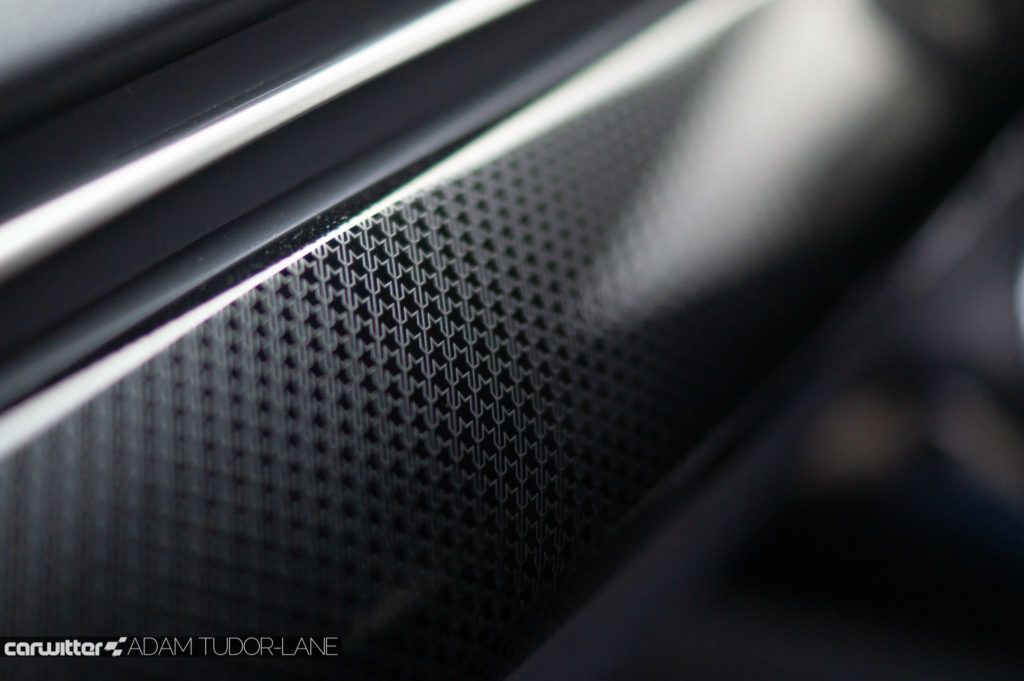 Naturally, the lower down you get, the rougher the plastics are, par for the course on cars of this ilk and nothing to moan about. Especially when all the touchy-feely bits are this good.

‘Sport Black’ gives you part Alcantara seats, which are decently hugging and add to the sporty nature of the 2. 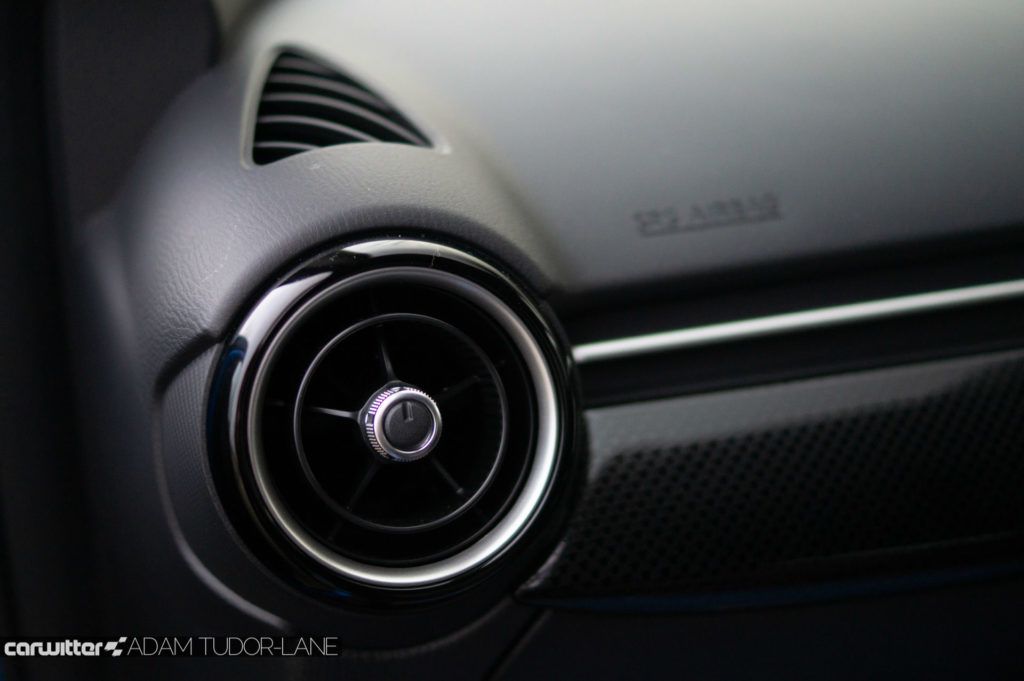 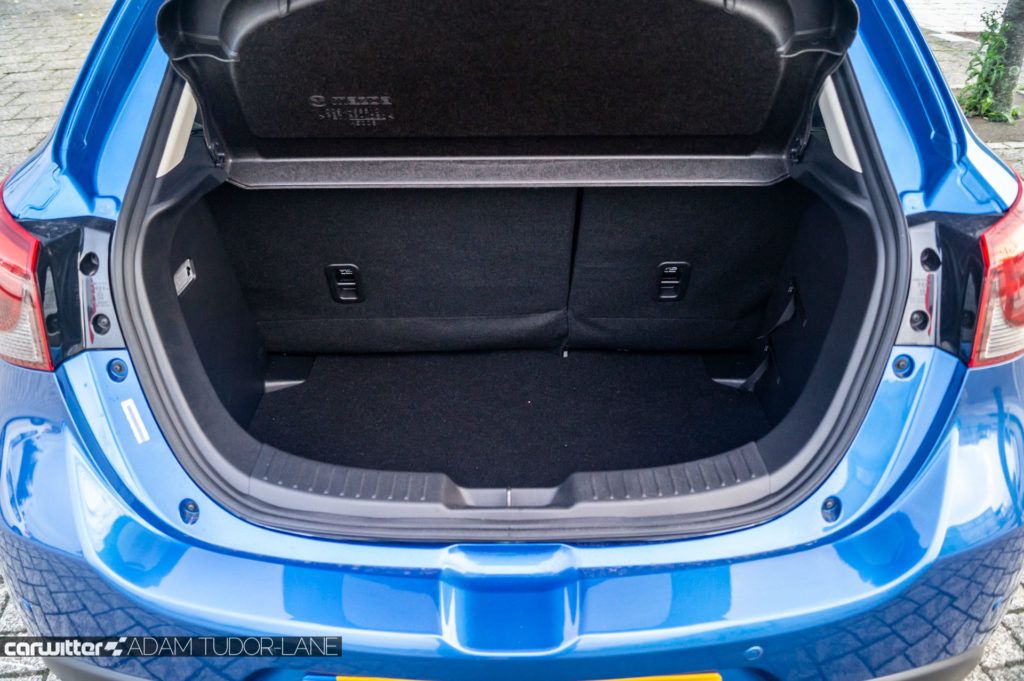 In the back things become a little tighter as you’d expect. Perfect for kids but a little cramped for adults even though it’s a 5 door.

Boot space measures in at 250 litres, which is on the small side. The current Fiesta manages 292 litres in three-door guise. 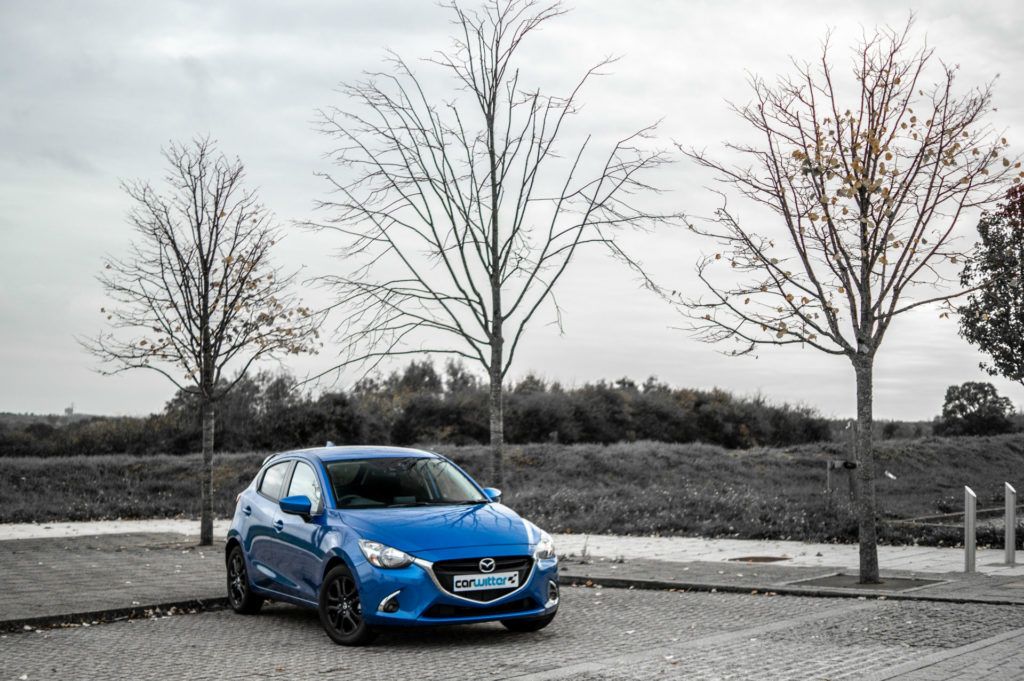 If you’re after a small hatchback that’s easy to drive around town but can be pushed hard on B roads enabling a wry smile, then look no further than the Mazda 2.

They’re rare which is another plus, every Tom, Dick, Harry and Margaret owns a Fiesta. Take the fun road instead.

Build quality will be higher, levels of tech greater, and most importantly, it’ll be fun to drive. 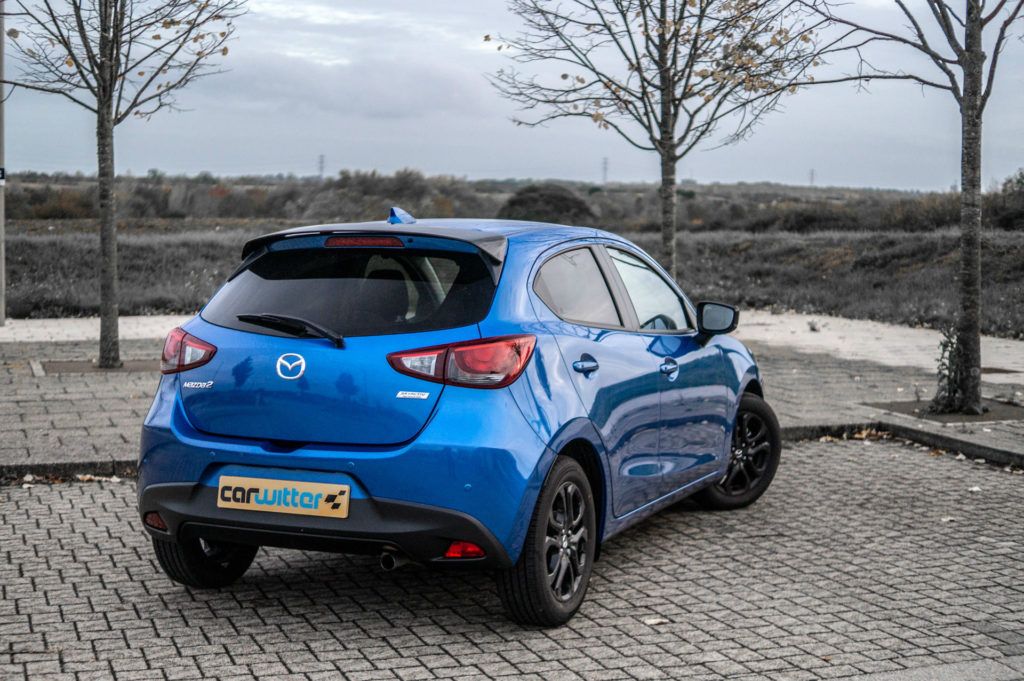 Car Dashboard Lights – what do they mean?