Kia Optima’s aren’t exactly a common sight on the road, but what about the estate version? Well, I think I’ve only seen two since launch. They’re a unicorn alright.

After loving the latest Optima we thought we’d take the Sportwagon on a long weekend away. 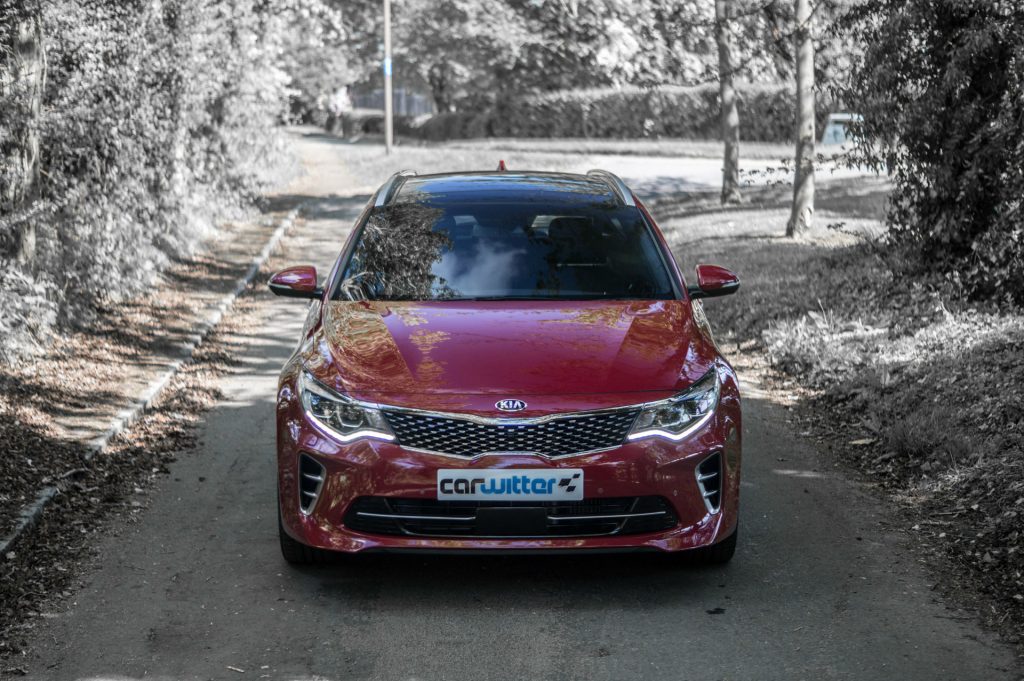 There’s something about estates, that when done right, they look spot on. The Optima is a case in point.

It’s so beefy and masculine. That wide, flared front end gives it such road presence. But it’s also sportier looking than most thanks to its sloping rear roofline. The Kia sort of pinches together at the back.

Our model came in GT-Line S form, which angrifies the front and rear bumpers, along with giving it some deeper side skirts and larger alloys. Granted, ours wasn’t in the best colour and I have no idea what Kia were thinking when it came to the two-tone door handles.

Temptation red (seen here) and gravity blue are best avoided. Pearl white or the no cost black are ultimately the best lookers. 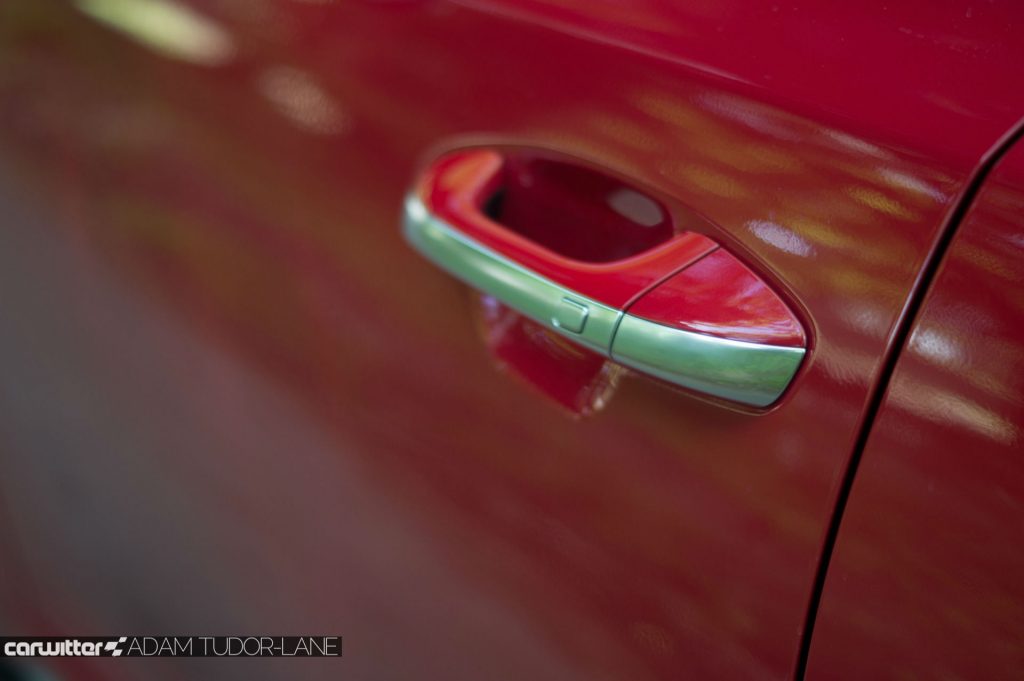 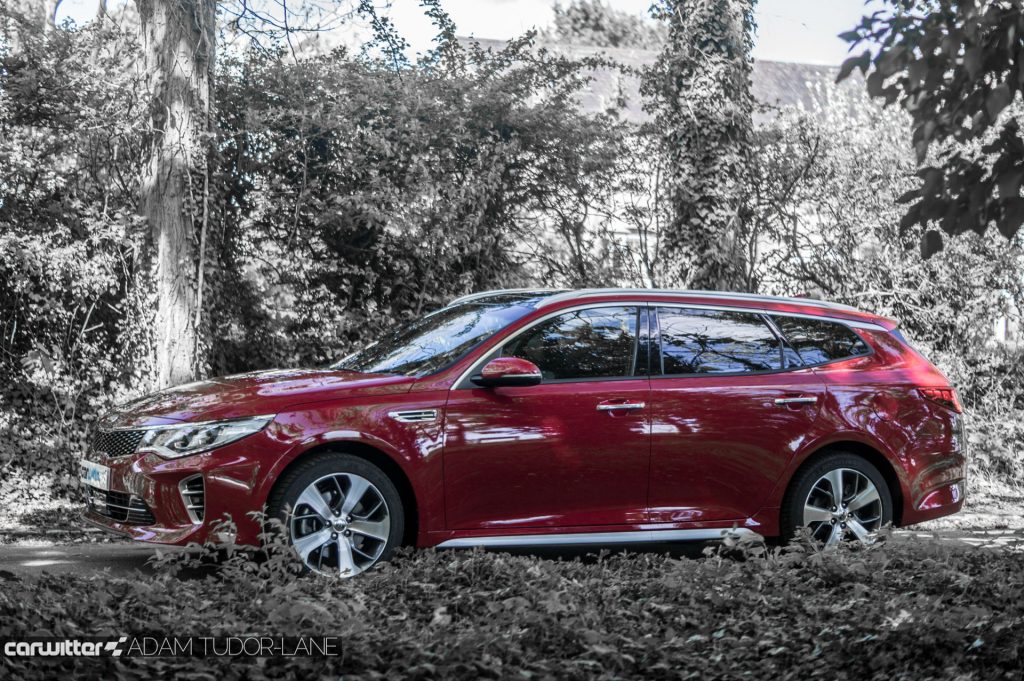 Forgot the name ‘Sportswagon’ as it can only be had with the plucky little 1.7 litre CRDi diesel engine in the UK.

That’s not a bad thing though. It’s always performed admirably in the normal Optima and the added length and heft don’t seem to blunt its abilities here.

For the first time in an Optima we went for the ISG Auto ‘box as it was a lazy, long distance drive. You can switch the car and gearbox form normal, to eco and sport. Sport holds onto the gears far longer than in normal mode, where the Sportswagon tends to go for the longer gears quicker. 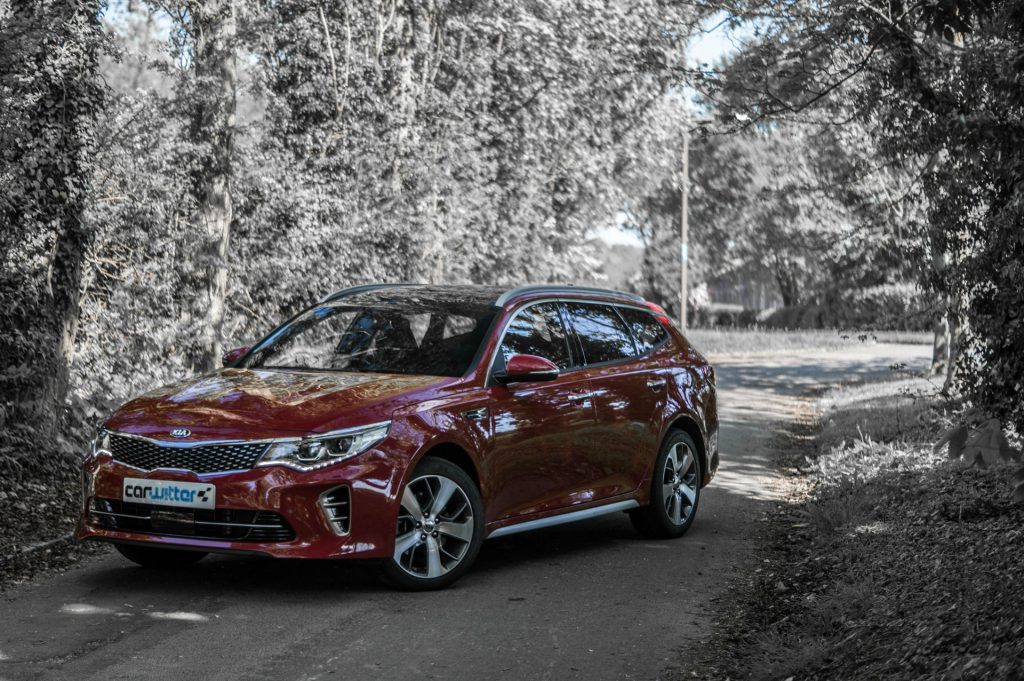 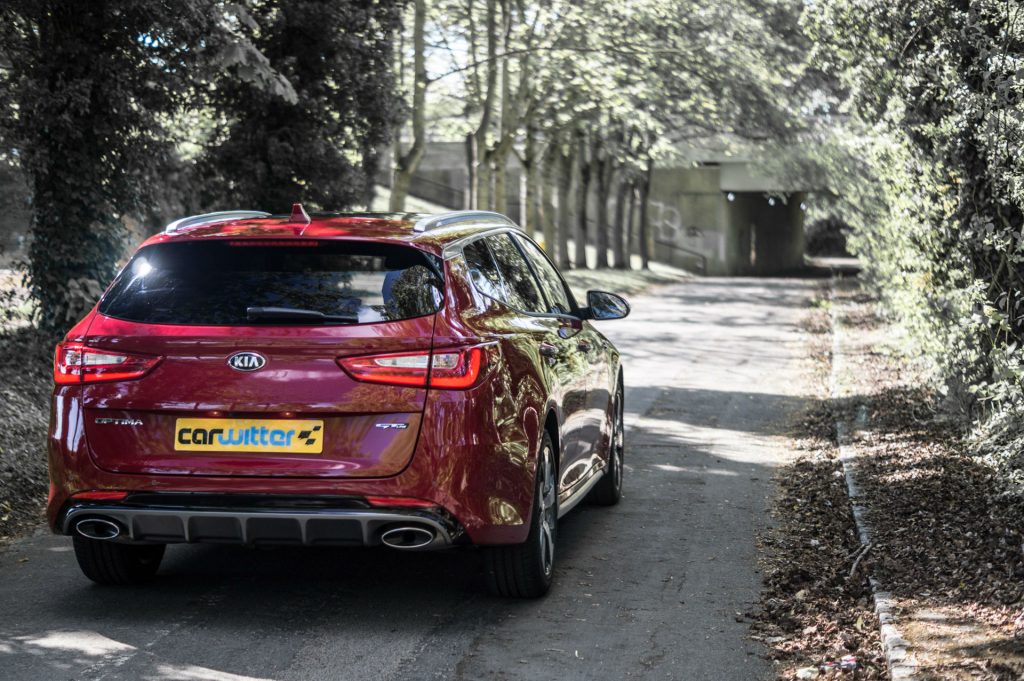 Occasionally it’s a little lackadaisical to get going from stationary, but other than that it performed admirably over 400 miles of mixed roads.

Actually, we could’ve been wrong saying to forget the name. It’s a half decent drive when you really push it. Letting the revs build, hearing the turbo working hard, you can pull out some surprising pace from the Kia.

Stiffer suspension helps keep everything in check, with ride being on the firmer side of hard. You’ll notice road imperfections more than in the normal Optima, especially on these larger 18” alloys. Inside is exactly the same as the saloon…up until the boot. So that means a nice 8” infotainment system which is easy to use, you also get a Qi wireless phone charger in the centre stack. Powered tailgate, parking assist, blind spot detection, cross traffic alert, you name it and the GT-Line S has it.

To help brighten up a rather dark interior, this trim has a huge panoramic folding roof that goes as far back as the rear seats. The first half tilts and folds creating a huge hole above you, perfect on a summer’s day. 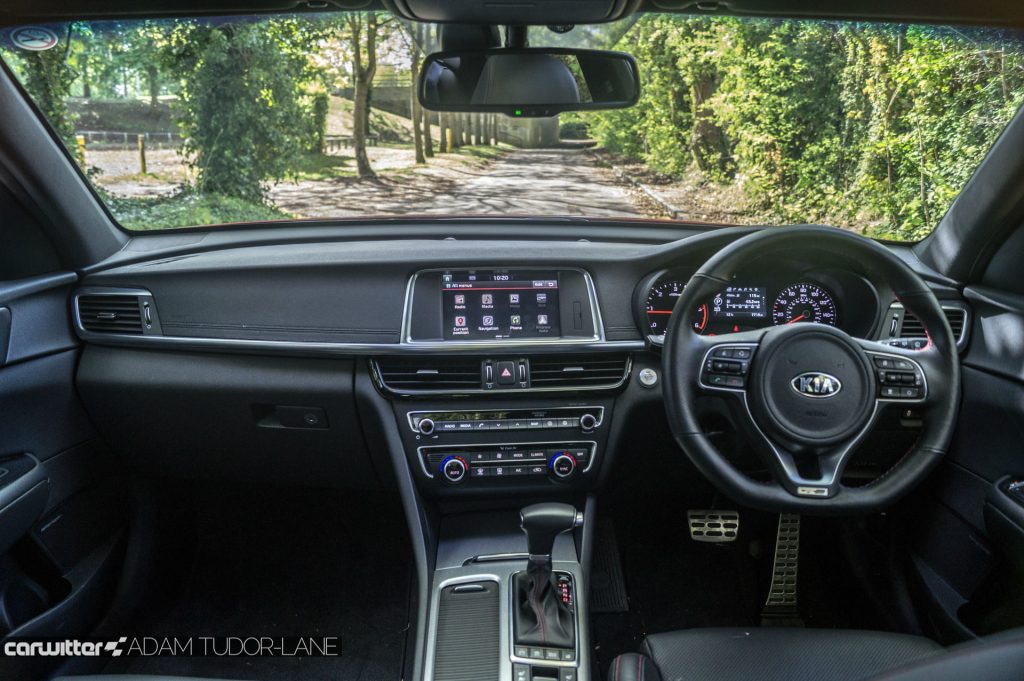 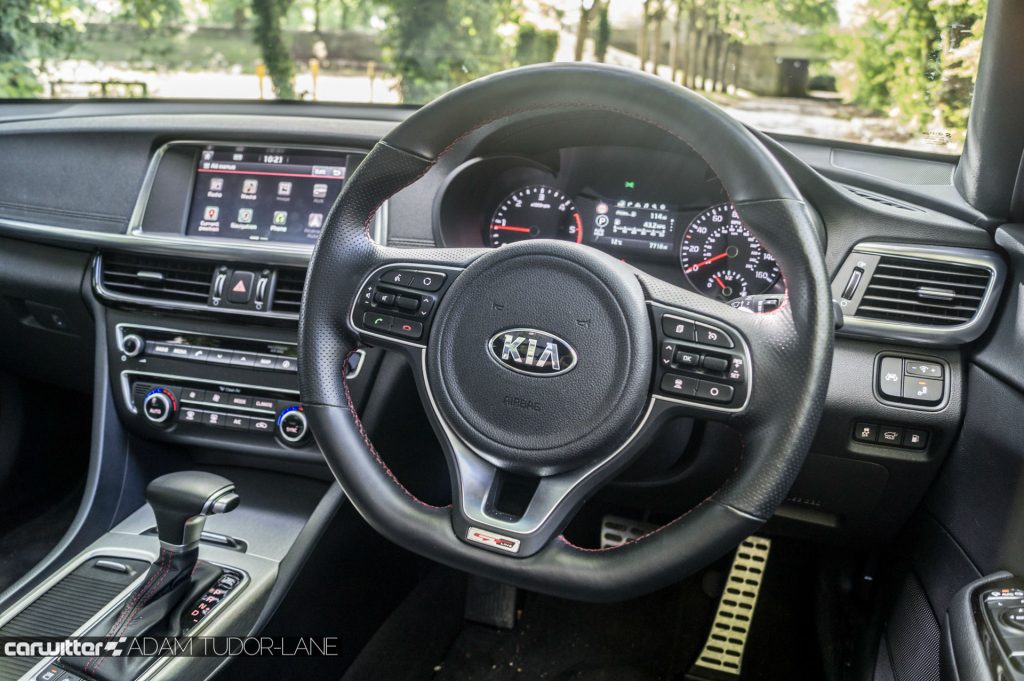 As this is the range topper you’ll find a Harmon Kardon stereo and 360 degree cameras, although the Sportswagon really isn’t THAT big.

You even get heated and cooled front seats, whilst the rears make do with individual heating and a ton of legroom.

Boot space is a huge 552 litres, with a fabric tonneau cover and an uncomprehendable luggage rail system to keep everything in place.

Annoyingly though there were cabin rattles. Even with the car completely emptied of anything that shouldn’t be there, creaks and rattles were to be heard when driving. They seemingly emanated from the roofline on the passenger side, and toward the boot. 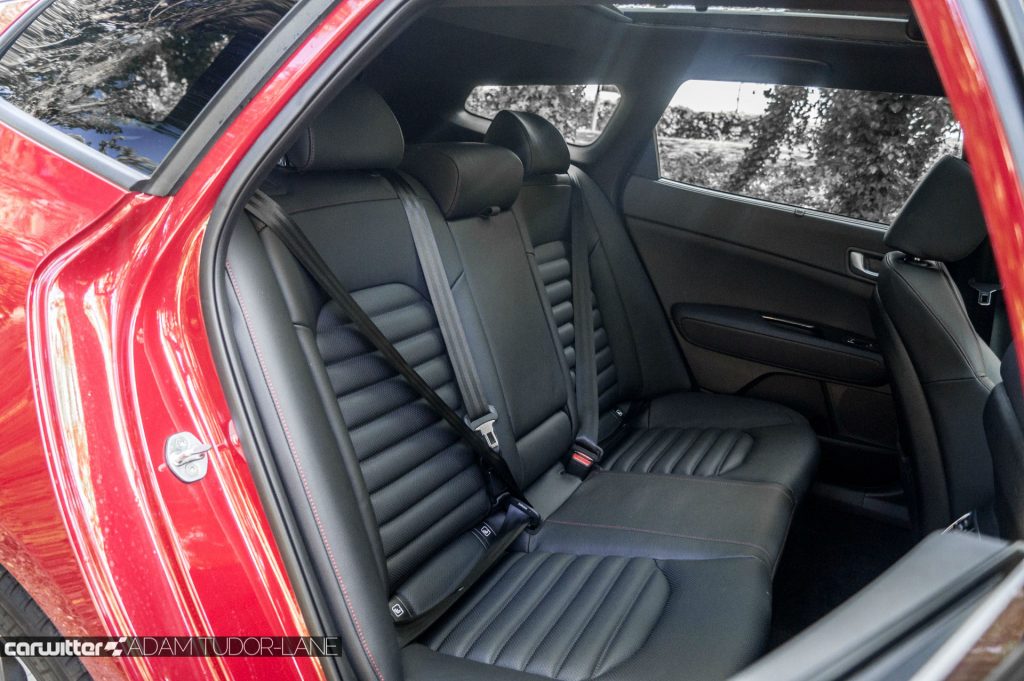 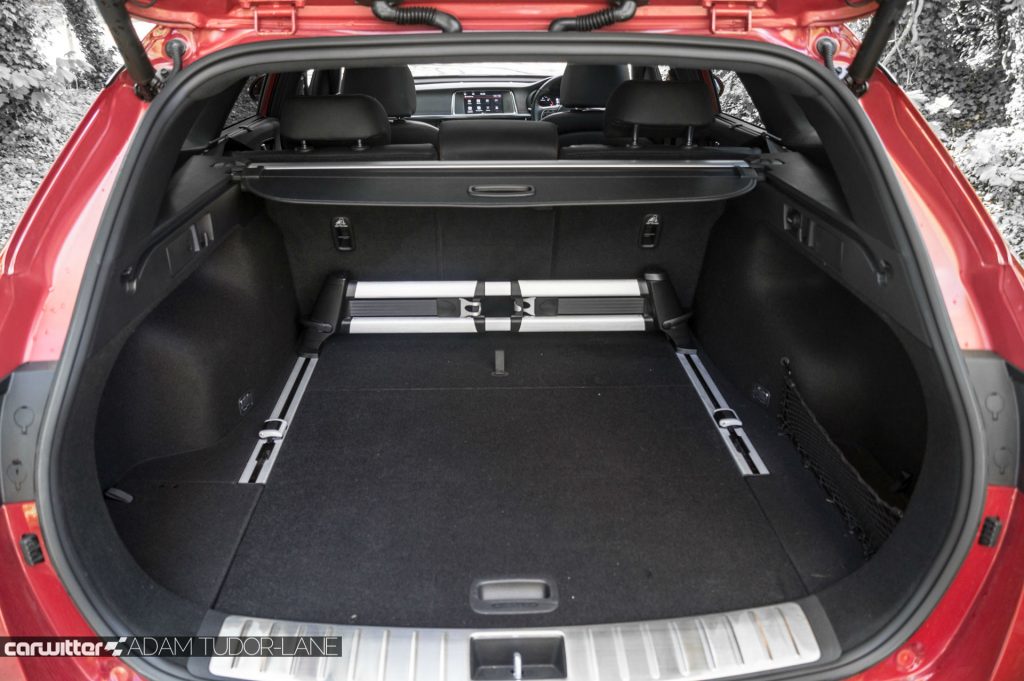 If you need more boot space, opt for the Sportswagon. Kia reckon it will make up 66% of Optima registrations in Europe going forward, but they’re still going to be a rare spot on UK roads.

We wait to see if the rumoured petrol turbo’d GT comes to Blighty, with its 242 BHP. Hopefully Kia will add the lovely Recaros found in the Pro Ceed GT, if it does come to fruition. 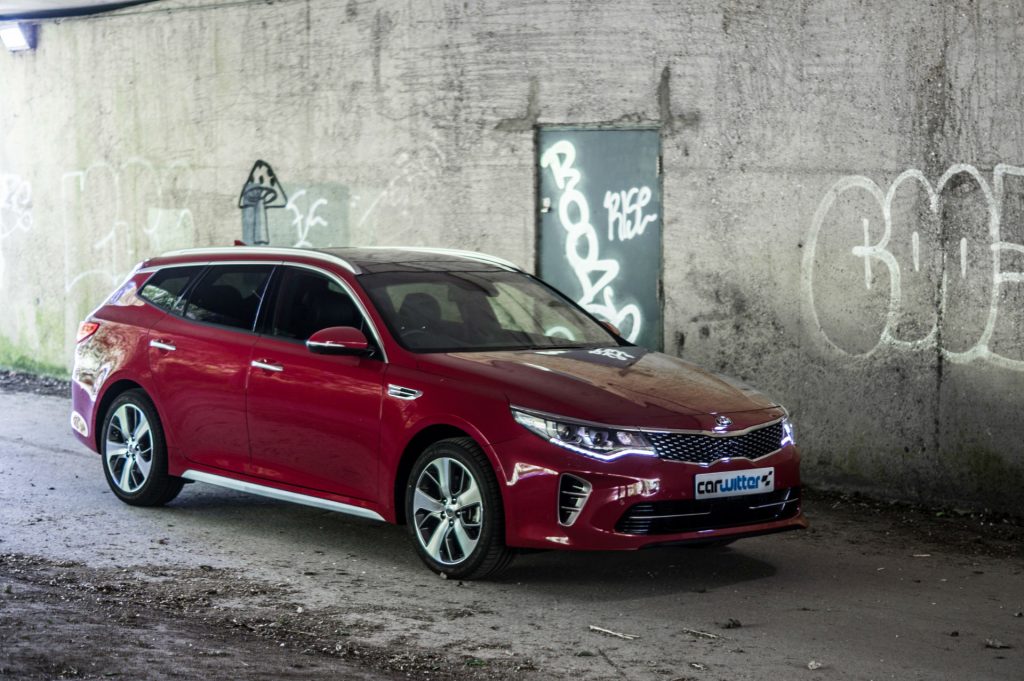 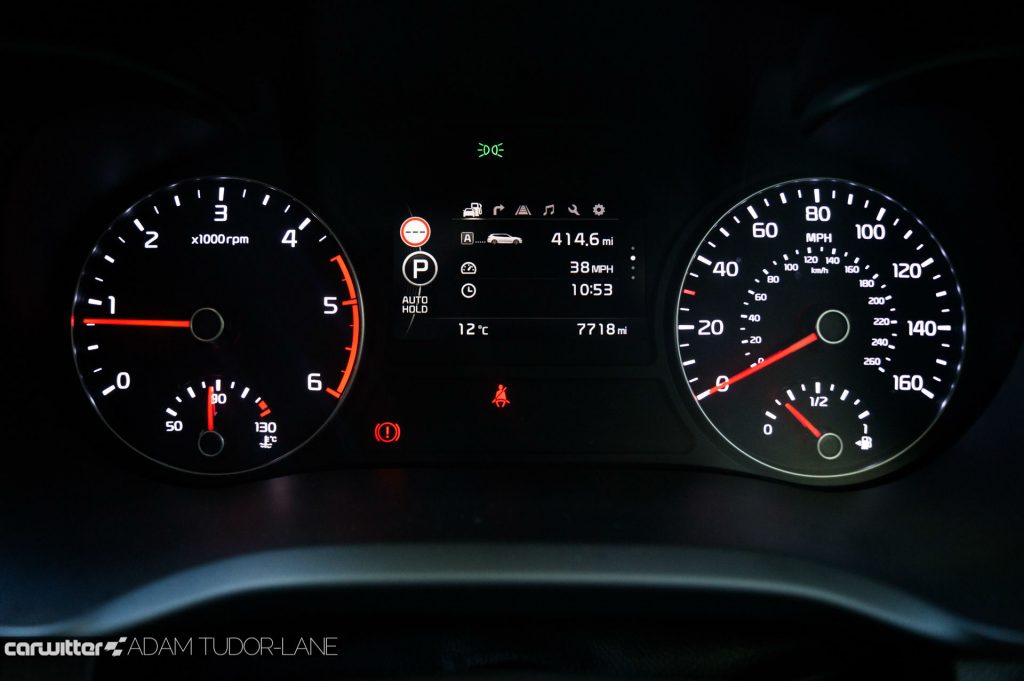 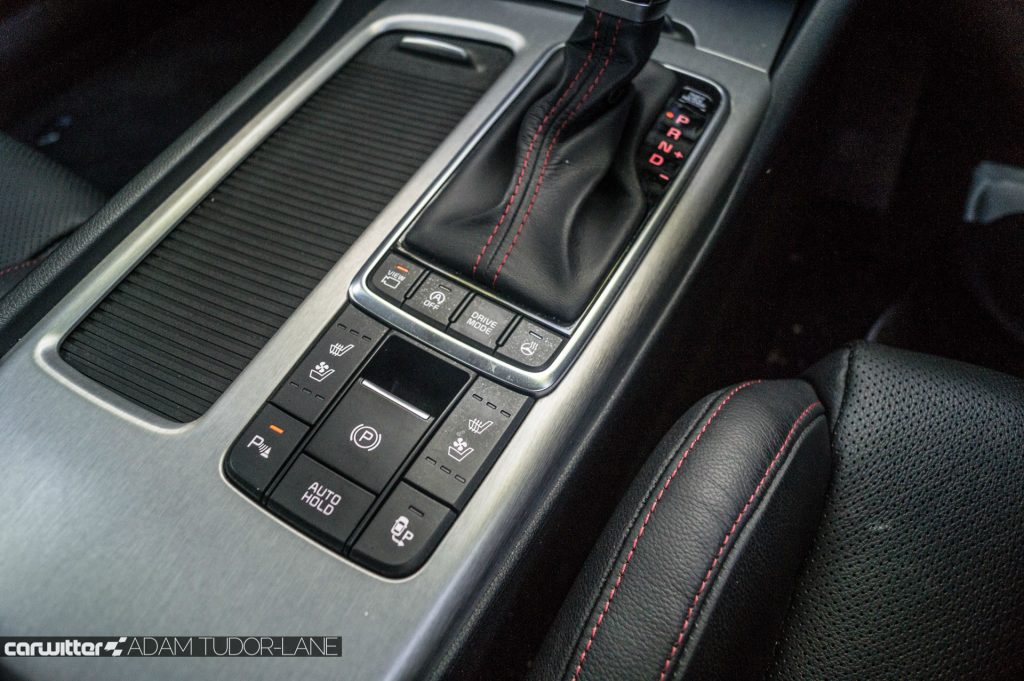 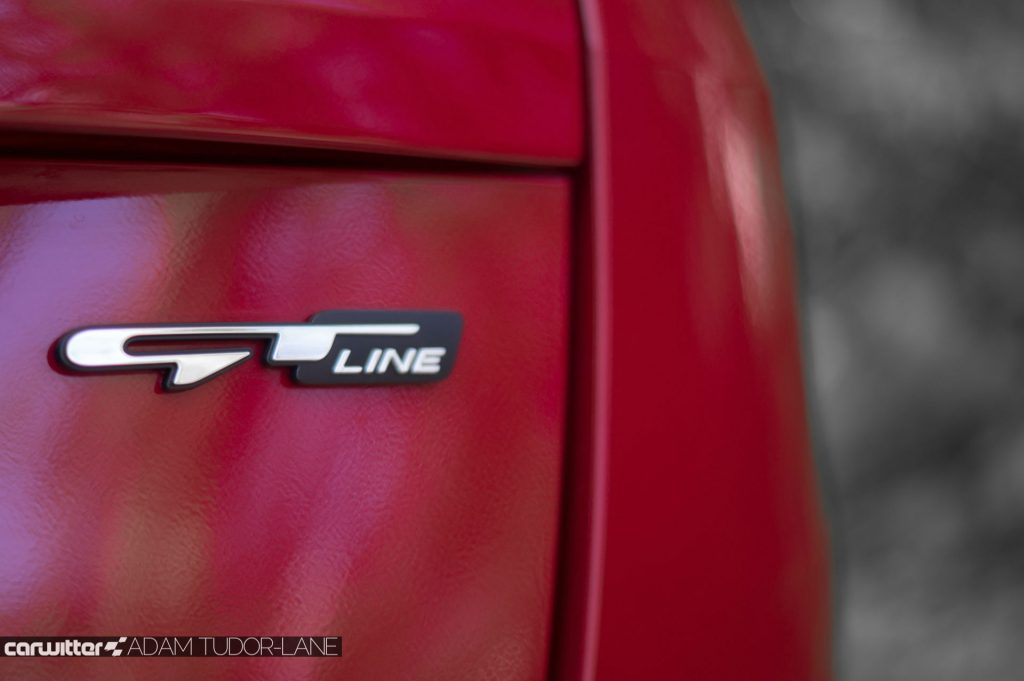 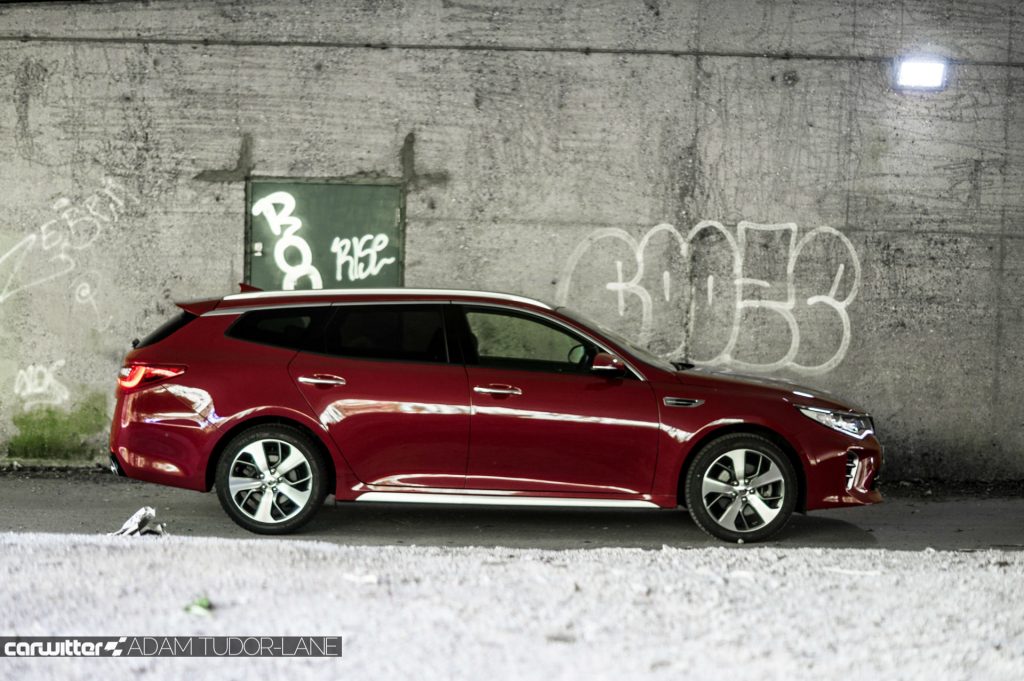