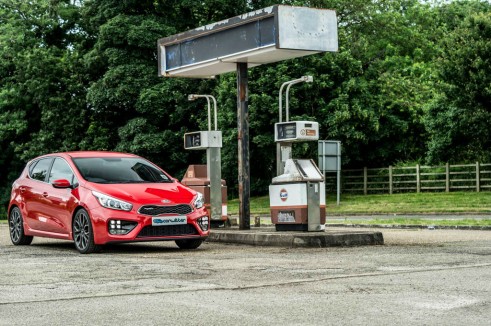 Earlier in the year we reviewed the stunningly good looking three door coupe that is the Kia Pro Ceed GT, we thought it was time to see what its bigger, five door brother was like, so we took the Ceed GT for a spin.

Our car was in bog standard GT trim, making it a rather affordable £20,500. 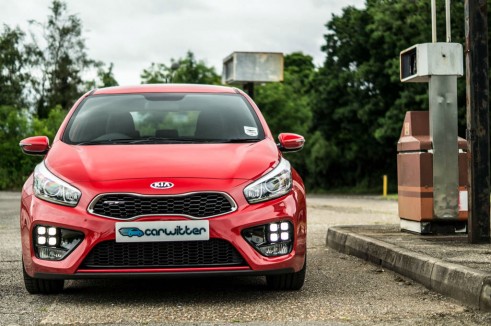 We absolutely loved the look of the Pro Ceed GT, but its bigger brother has two additional doors…

It still looks superb though, that mean looking front end with its ‘Ice Cube’ style running lights is still very much present. So are those gorgeous 18” alloy wheels, they really are a work of art! 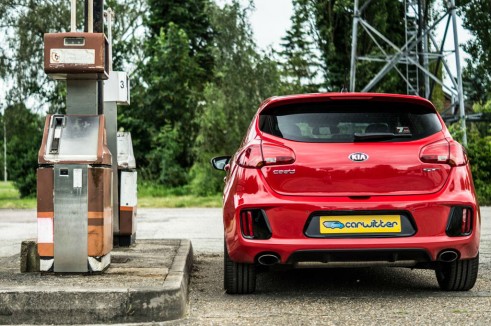 At the rear you get twin tailpipes, a smart roof spoiler and those very cool gloss black inserts found on the corners of the Pro Ceed GT.

Finished in Track Red – as our car was – it really does stand out, it may not be as sleek as the low slung Pro Ceed but it’s still a looker. 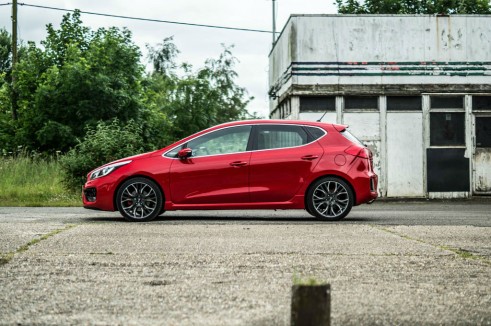 Funnily enough you get the same 0-60 time of 7.4 seconds whether you go for three or five doors, and we can vouch for that.

Pin the throttle and you are pushed back in your seat by that 260 Nm of torque. In any gear it pulls superbly, once into those higher gears the torque grows slower, so if you really want blistering pace for an overtake it’s worth knocking it down a gear. But if you have the time, be lazy and keep it where it is.

Over the engine you can hear a fairly muted exhaust note, it would be nice if this was a little more visceral and engaging. At lower revs it doesn’t sound half bad though. 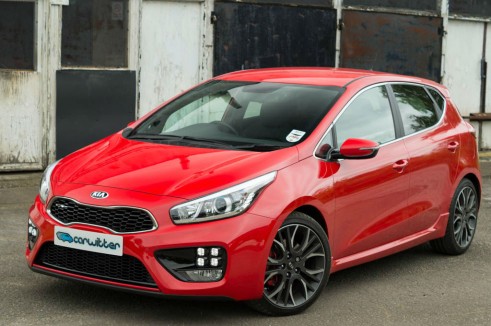 Steering is direct and instantaneous, it’s still lacking any sense of feeling which is a shame, but you can forgive it that.

Ride wise it felt somewhat softer than the Pro Ceed GT, potholes are taken with more comfort…but this isn’t all good news as the Ceed feels like a bigger car compared to the three door model. Go round a corner a bit too quick and you soon notice that extra weight, we thought Kia may have been able to do a Suzuki and pull off a 5 door model with clone-like handling, unfortunately they haven’t. 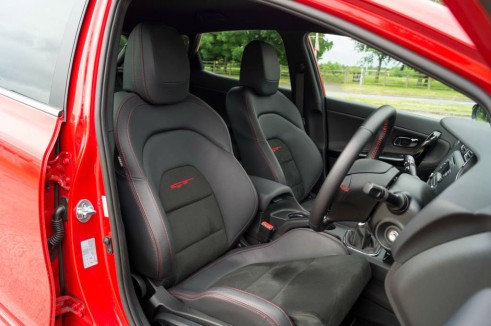 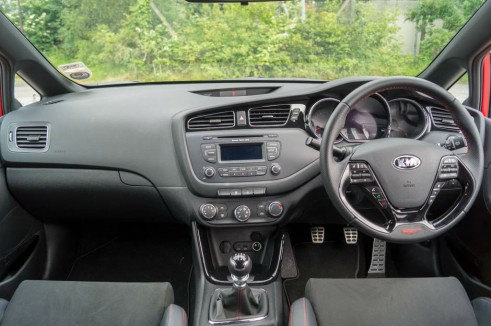 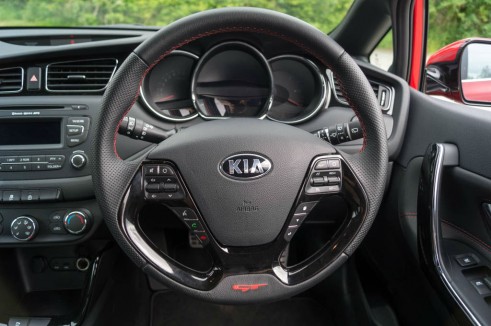 As soon as you open the door on the GT you noticed the Recaro front seats, these are proper performance jobbies. Deep and hugging, they hold you perfectly and are oh so comfortable on longer journeys. 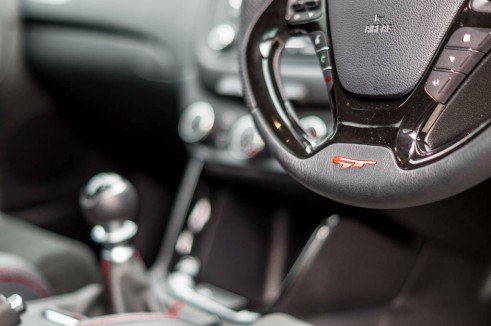 As well as those seats you get some red stitching, black head lining and GT badging, but apart from that it’s pretty standard Ceed inside. Our base model GT had enough creature comforts, it lacked the heated seats, sat nav and rear view camera that the GT Tech has, but to be honest we prefer a back to basics hot hatch! 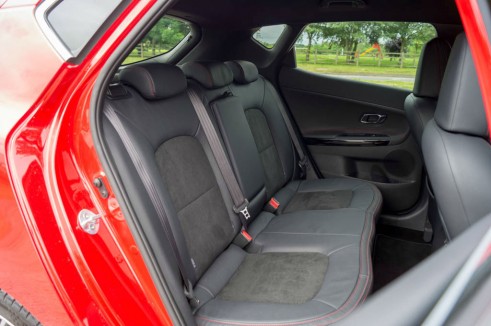 Rear seat leg and head room is very good thanks to the low hip point and high roofline, we can imagine the Ceed GT being a very comfortable place for 4 adults on a longer journey.

Boot space is the same as the Pro Ceed’s at 380 litres, with 60:40 split rear seating if you need extra luggage space. 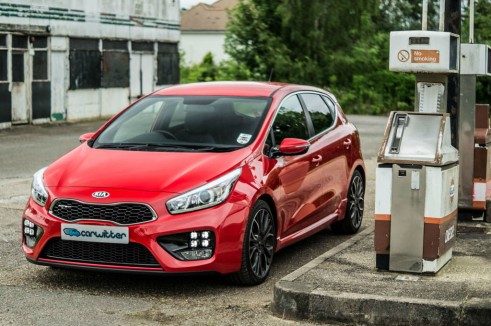 Kia’s Ceed GT isn’t exactly what we had hoped for, a five door version of the three door Pro Ceed it certainly isn’t. In terms of pace and speed they are neck and neck, but those additional 23kg and extra body height are really felt when you compare the two.

This is probably where we would have to recommend its arch nemesis the Golf GTi. At £26,895 for a basic 5 door model it is a fair old packet more…but we can tell you that it handles the same as its three door sibling! 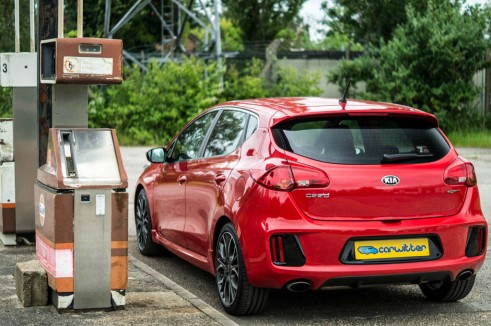 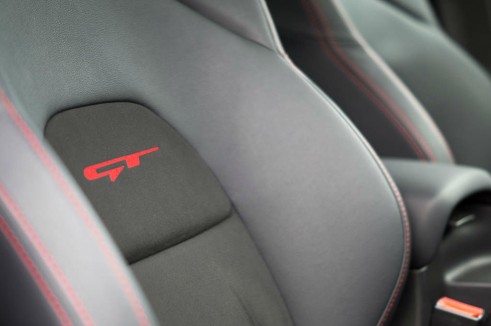 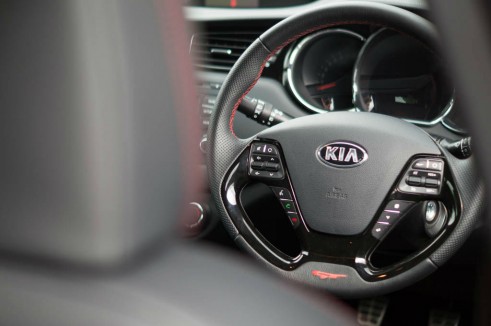 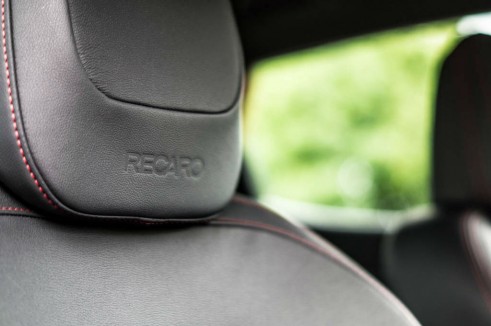 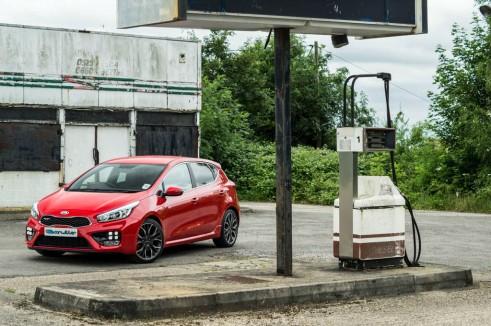