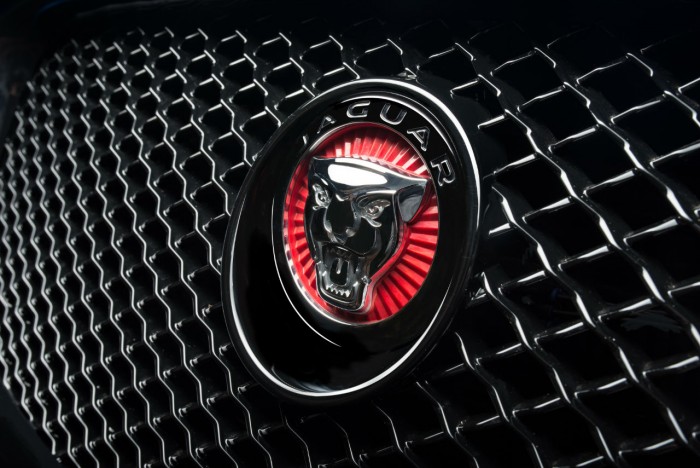 Jaguar have a lot to thank the XF for. When it was released in 2007 it pretty much single handedly saved the Jag brand. It bought in fresh blood, suddenly younger 40 somethings wanted one, whether they be execs getting them on lease or your average family man wanting something a bit more upmarket than his Mondeo.

It was accessible, it was good. In fact in 2009 it was outselling every other executive saloon, taking up to 60% of the market in some months.

Jag needed this success to reignite the brand, and they got it.

In 2013 Jaguar revealed the ultimate version of the XF. The XFR-S. Now this is no quick saloon, it’s bloody rapid.

Powered by the JLR performance mainstay – a 5.0 litre Supercharged V8 it produces 542 BHP and a world altering 680 Nm of torque. Just to put that in perspective, that’s the same horsepower as a Lamborghini Gallardo 550, and 140 more torques!

Seeing as we have never reviewed and XF on Carwitter, and with the new model round the corner this was the model to test. Naturally. 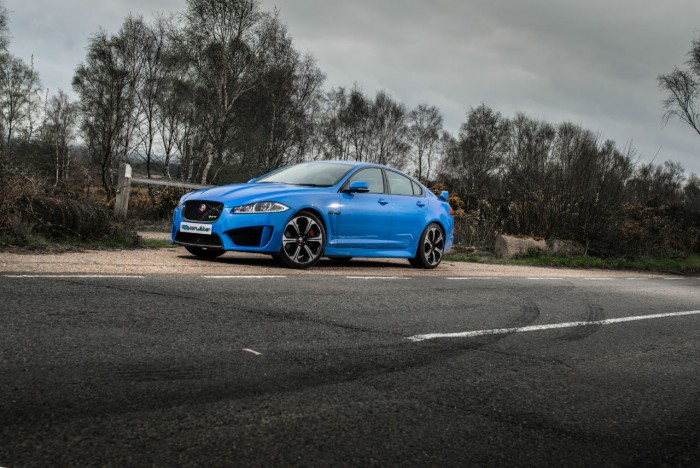 Walking up to it for the first time – keys in hand – you have to stand back and just take it in. The extra wide grilles at the front corners give the XF a menacing, Audi’esque look to it. Carbon fibre finishes the lower grille and those bonnet nacelles embossed with the ‘Supercharged’ text mean you are in for a good time. 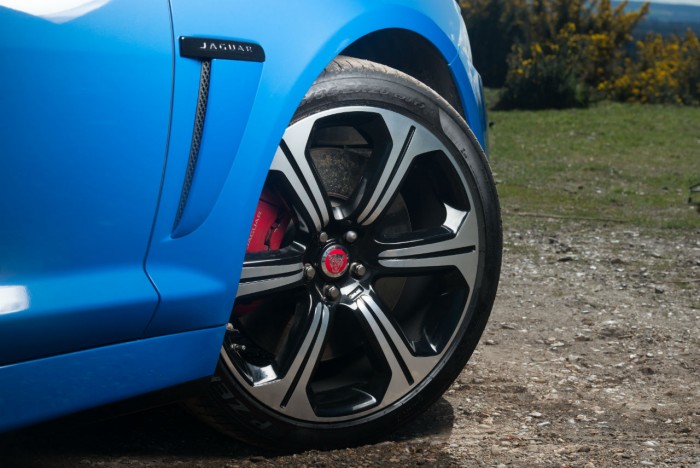 Moving down the side of the Jag you spot the arch filling alloys, now these are really arch filling. It would be hard to get a fag paper between the tyres and the metalwork. With a completely flat polished face to them, they certainly look the part. 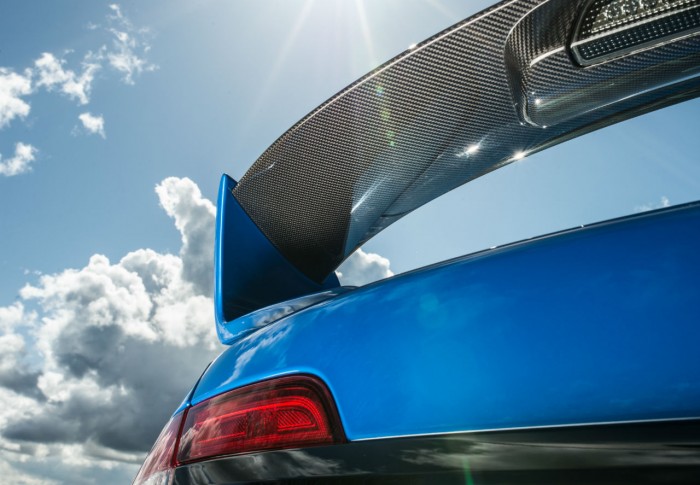 At the back you notice the HUGE rear wing. It has a delightful shape to it, the way it curves and cuts back in on itself is such a great detail. Another is the way the LED brake light fits into the underside of the carbon fibre, such a small part and mostly unnoticeable but the curve is gorgeous.

Below that sits a rear diffuser and twin tailpipes at each corner. 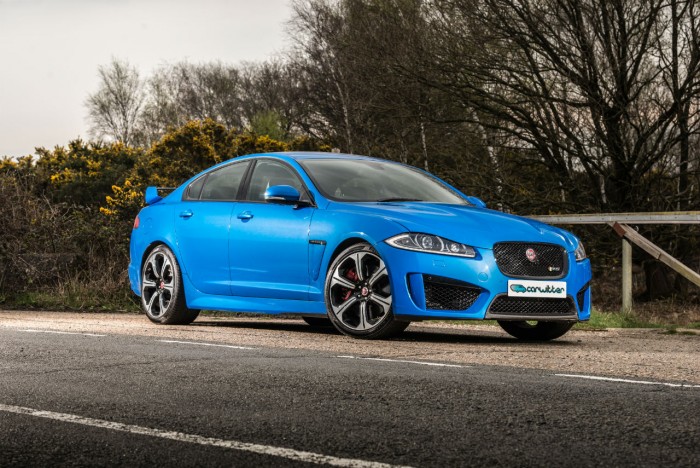 Those looks aren’t all for show either. Jag say that the extra additions reduce lift by 68%. That, coupled with the 30% stiffer suspension – the front setup being lifted directly from the XKR-S – and you have a pretty well sorted monster saloon.

Firing up that V8 is like you have angered the gods. The only way it can be described is a low, continuous rumble of thunder on the horizon. Put foot to the floor in park and you are suddenly transported to Whipsnade, a big cat has just pounced at the wire fence you are walking past. It sounds injured. And angry! 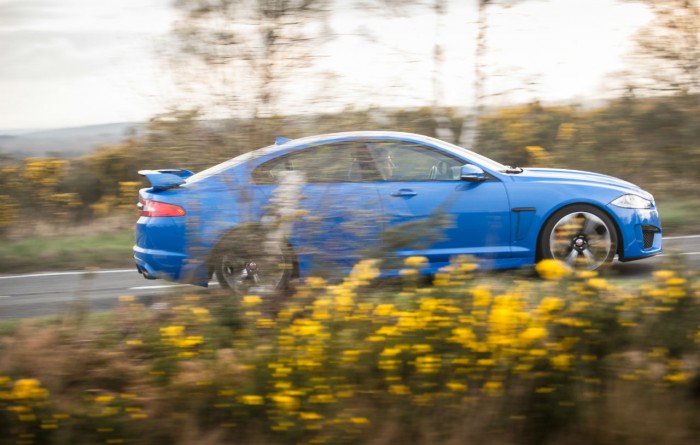 0-60 in this behemoth is achievable in 4.4 seconds. 4.4 seconds to shift 1987 KG to 60. That’s impressive. Taking it back to the Gallardo comparison, that raging bull does the same sprint in 3.8 seconds.

Acceleration really is blisteringly quick. It feels F-Type R levels of quick. Drive both back to back and you would be hard pushed to notice the difference.

Ride is firm but not harsh, over rougher roads you will notice how stiff it is but never does it become crashy. At motorway speed it’s perfectly comfortable over long jaunts.

Steering is very well balanced, surprisingly you can place the big cat rather meticulously. Step on the loud pedal a bit quick and you will get the traction control stepping in.

In the wet you really have to have the feet of a ballerina, even being a featherweight on the accelerator can lead to that little lifesaving light flashing on the dash. 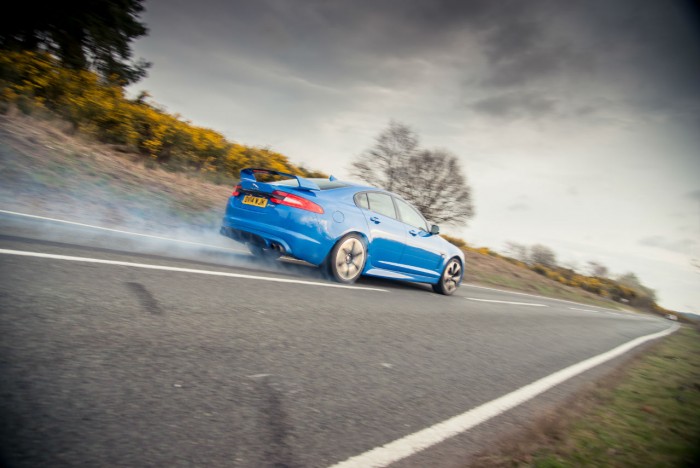 On dry days you can switch the traction control to TRAC or fully off. TRAC mode will let you slide but save you before you spin…or kill yourself. Fully off is when the fun really starts though.

Braking is looked after by some hefty bits of metal front and rear. They measure 380mm up front and really feel more ceramic than metal in the way that they bite. Corner after corner they bring this weighty cat under control with no noticeable fade. 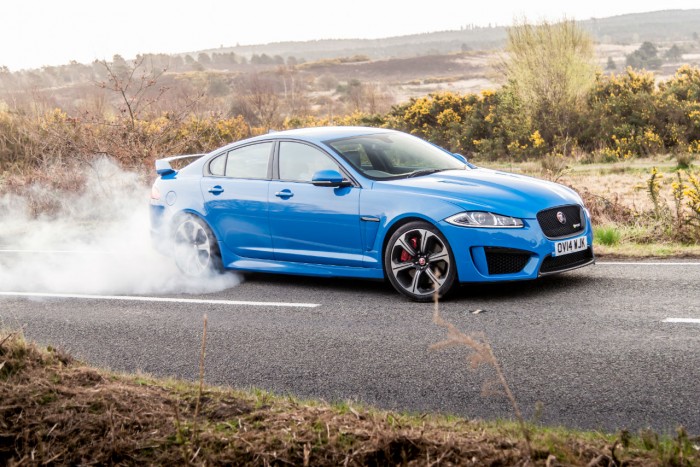 I have to mention it as it wouldn’t be a thorough Carwitter review without it…MPG. Urban is rated at 16.7. Before we took a long drive to Sussex we were getting 13, the lowest we saw was 12 and by the end of the week we were at 15.5. Hey, it’s a supercharged V8 what do you expect?! 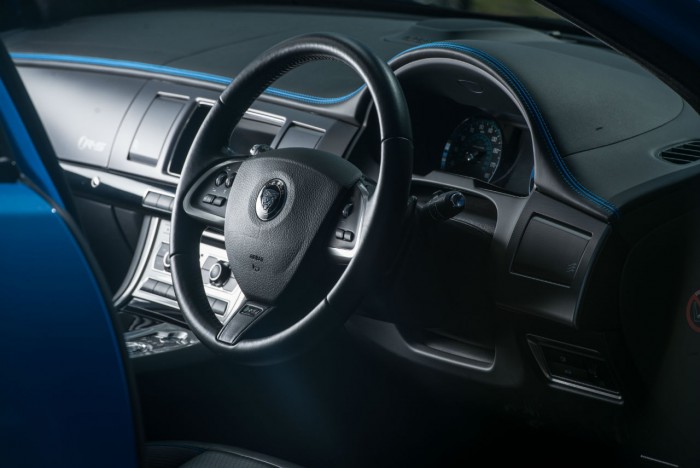 Inside you get leather throughout. Blue stitching and piping are paired with a carbon fibre effect material on the doors and seat detailing. 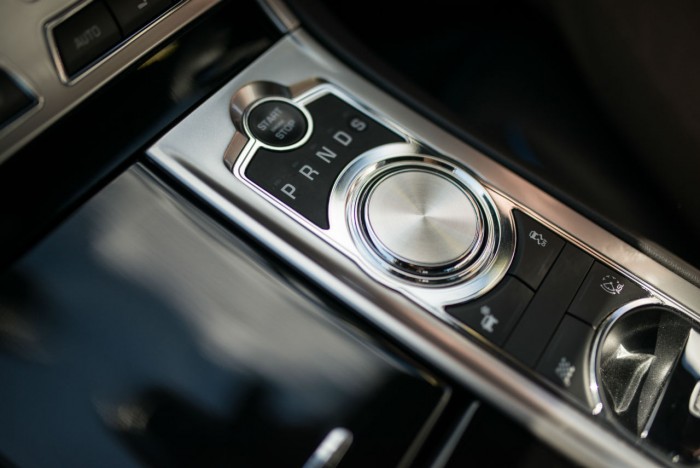 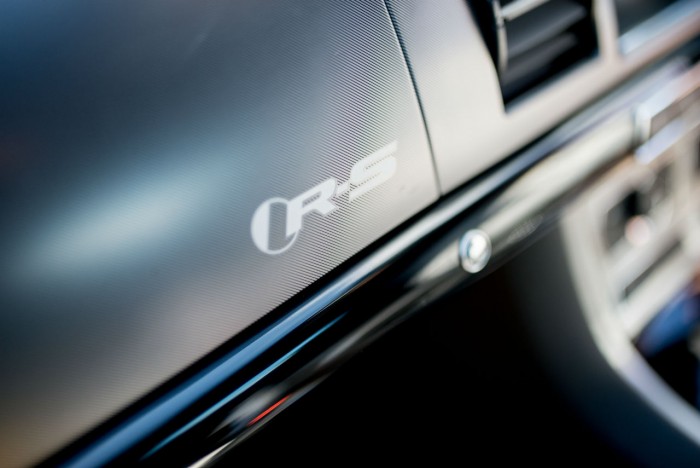 Naturally you get the trick revolving air vents and magically appearing gear selector, the Alcantara roof lining is to die for – in fact it’s a shame there isn’t more throughout the car. 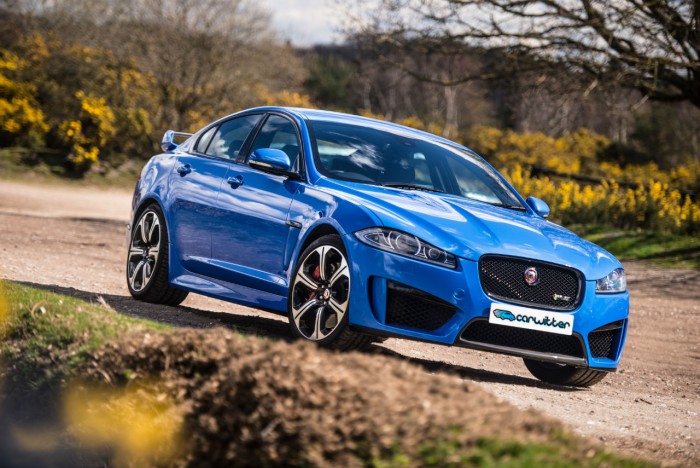 So, the car that saved Jaguar in the modern era. Like a reincarnation of the E-Type. Right car, right time.

Undoubtedly the R-S model is the halo of the range, break neck performance, great handling…it’s basically an F-Type with 4 doors…with enough room for the clubs and a caddy in the boot.

At £81,795 (with options) it’s more expensive than both an M5 and an E63 Merc, but naturally you would choose British…wouldn’t you? 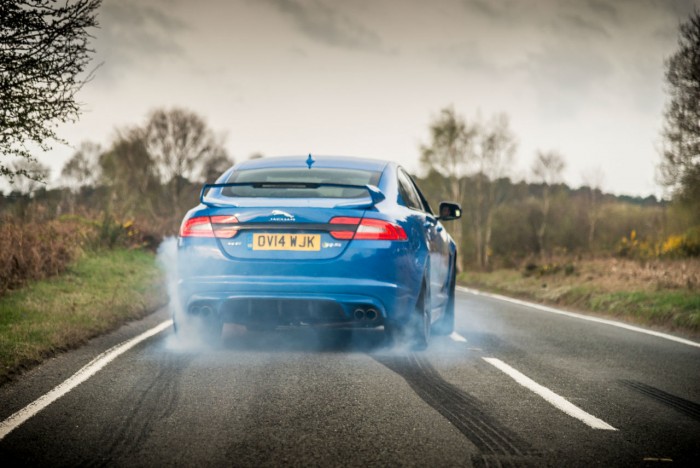 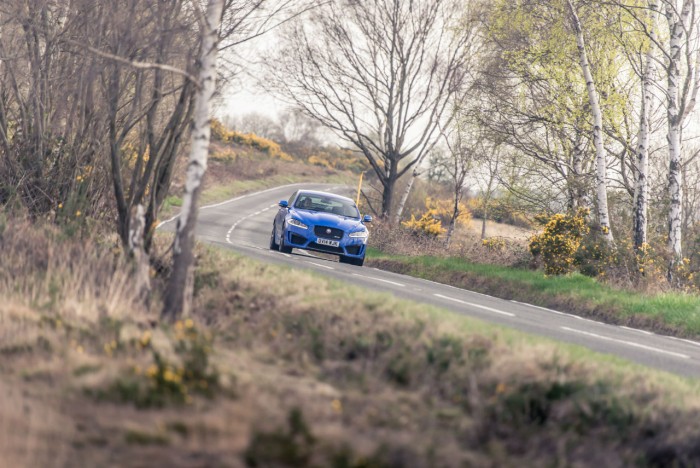 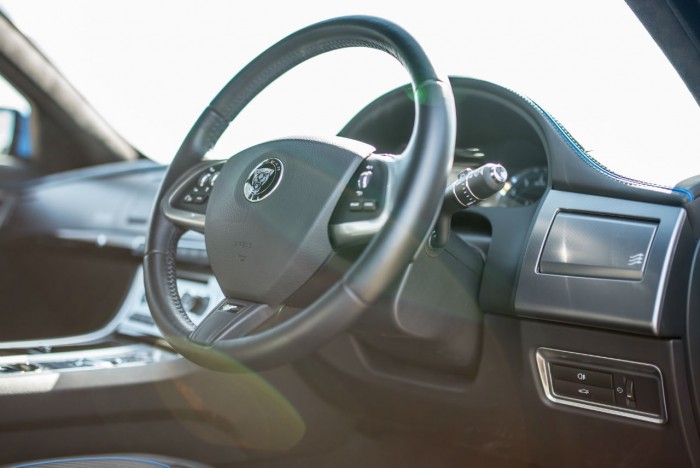 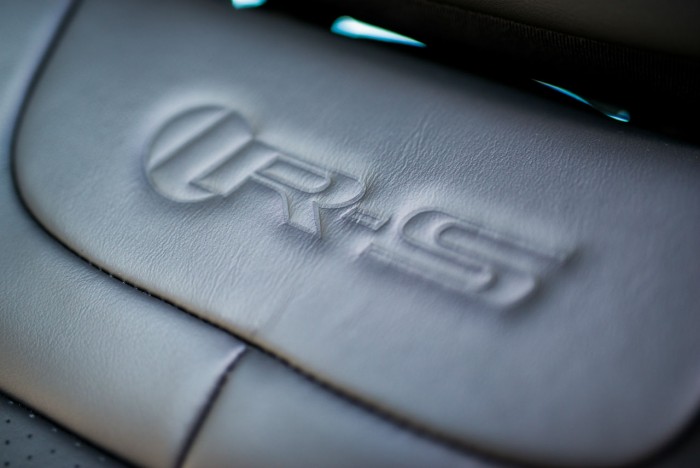 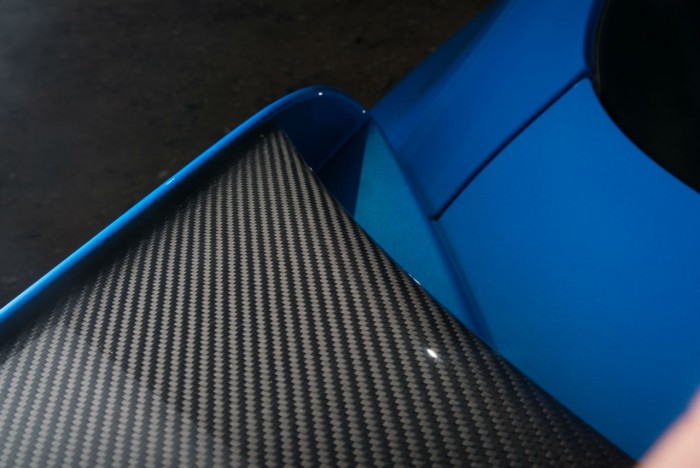 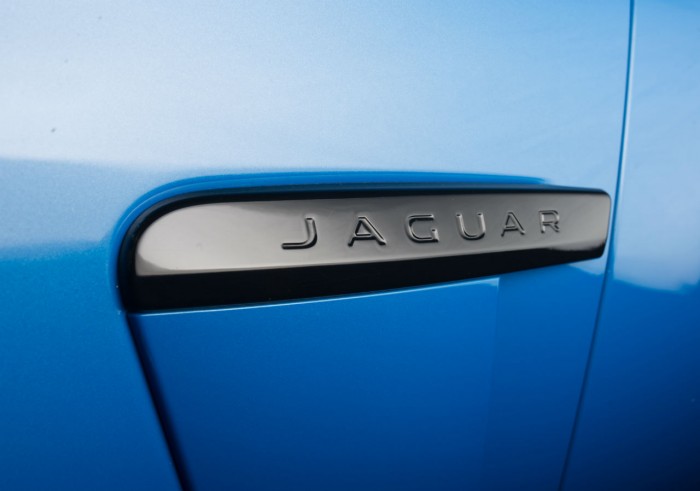 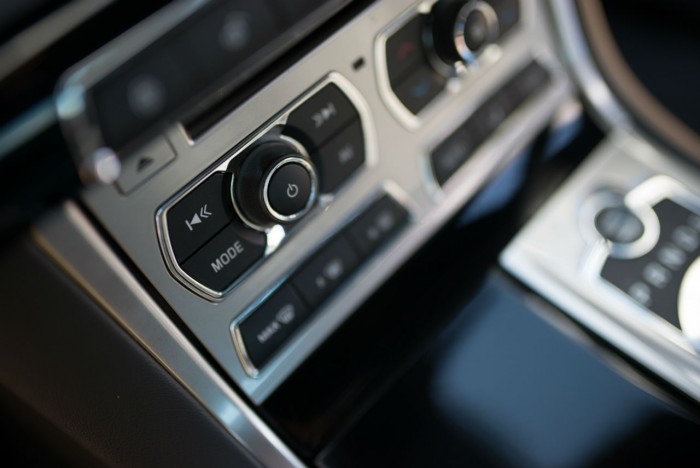 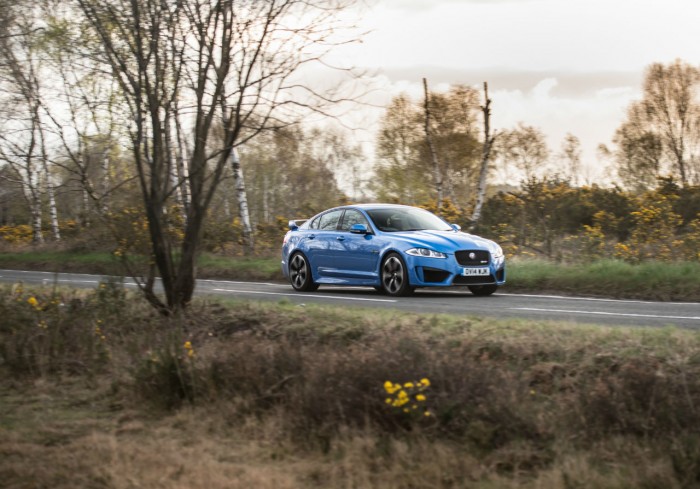 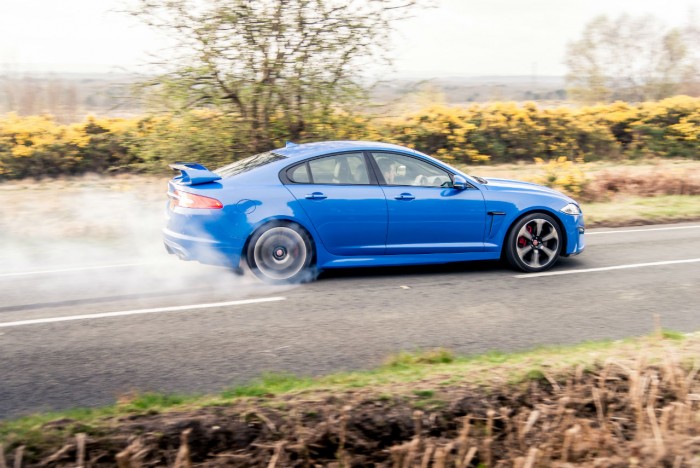