Lifestyle pickups are big business, they have been for the last four years or so, but it’s taken Isuzu all this time to cotton on…you wouldn’t think that they’re trying to expand their sales volume. Finally, the ball has dropped and to offer a halo product that sits under the Arctic Trucks AT35 but above Blade is the new D-Max XTR. 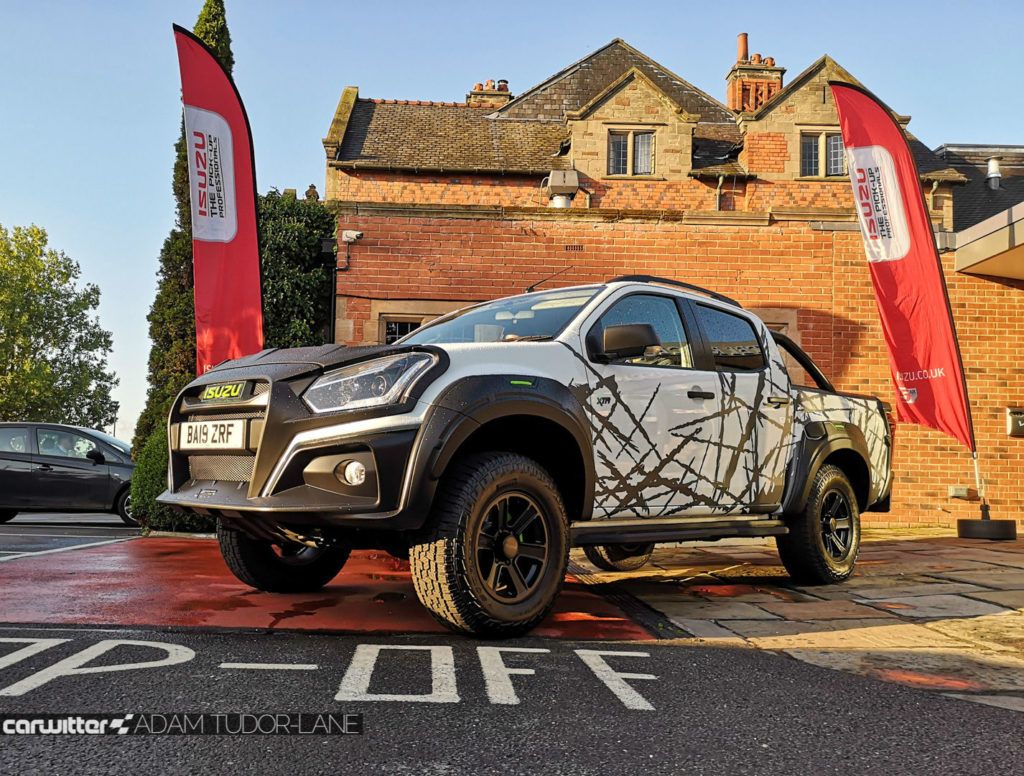 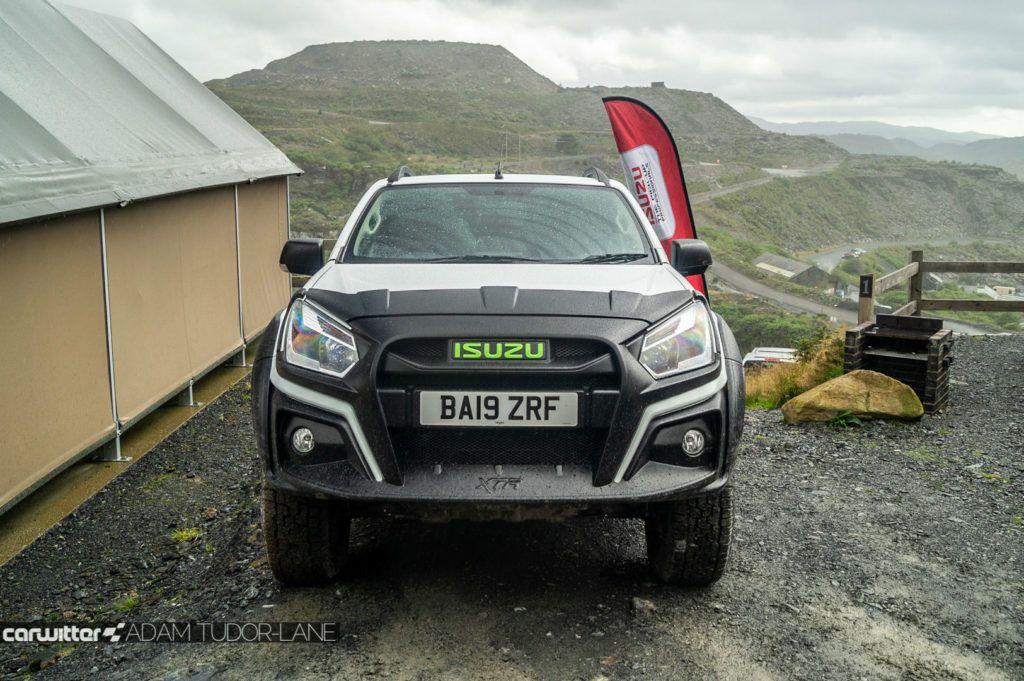 Starting at £33,184 ex VAT, the XTR features some in your face luminous green accents on the suspension and badging, widened black plastic wheel arches and a mean-looking front mask.

It’s not all for show though, there’s now 250mm ride height thanks to a Pedders suspension system, and all-terrain Pirelli Scorpion tyres to make sure you can take on whatever you point the XTR towards. 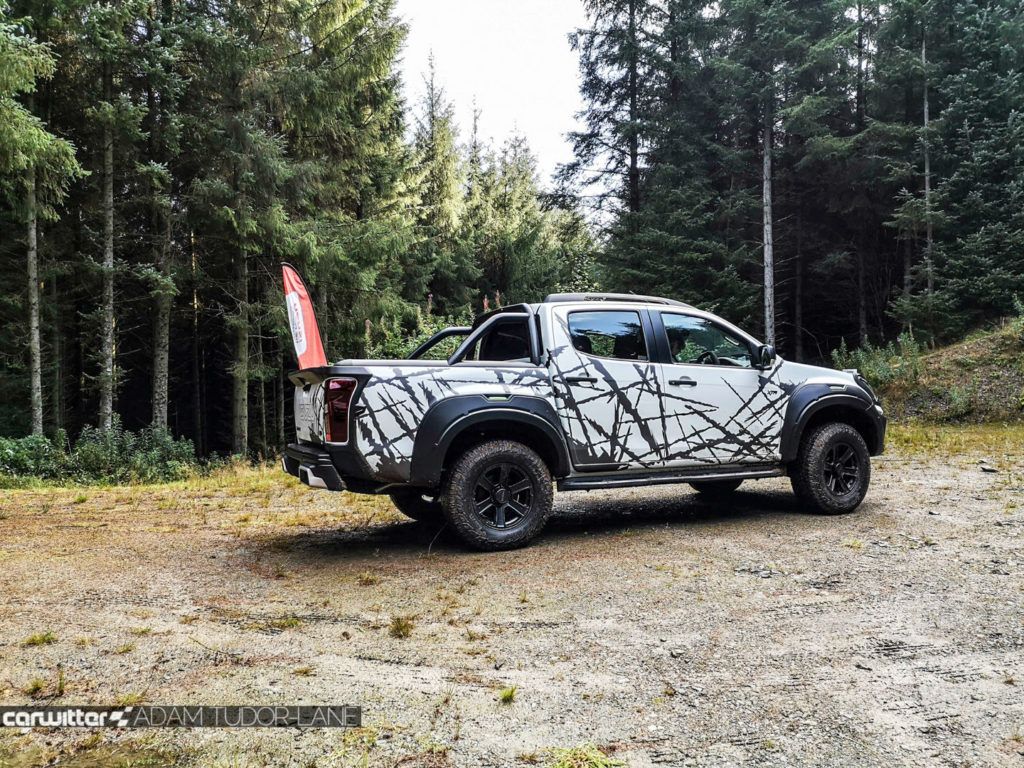 While it may not have the dune chewing abilities of the Ford Raptor, nor the ultra-wide road presence it does offer something unique in the market – A pre-customised pick-up with a ton of character ready to roll.

There are numerous optional accessories, including Lazer light bars, an aluminium under guard, body graphics and a huge 9-inch Alpine infotainment system. On the road the XTR is always going to be a little flawed, it’s not designed for this realm, the stiff suspension gives a more rigid ride than the likes of the Blade, but it’s still comfortable enough for daily use. You get the normal pick-up shimmy and shake over broken sections of tarmac, and the extra ride height gives you an even more commanding view over your fellow motorist. 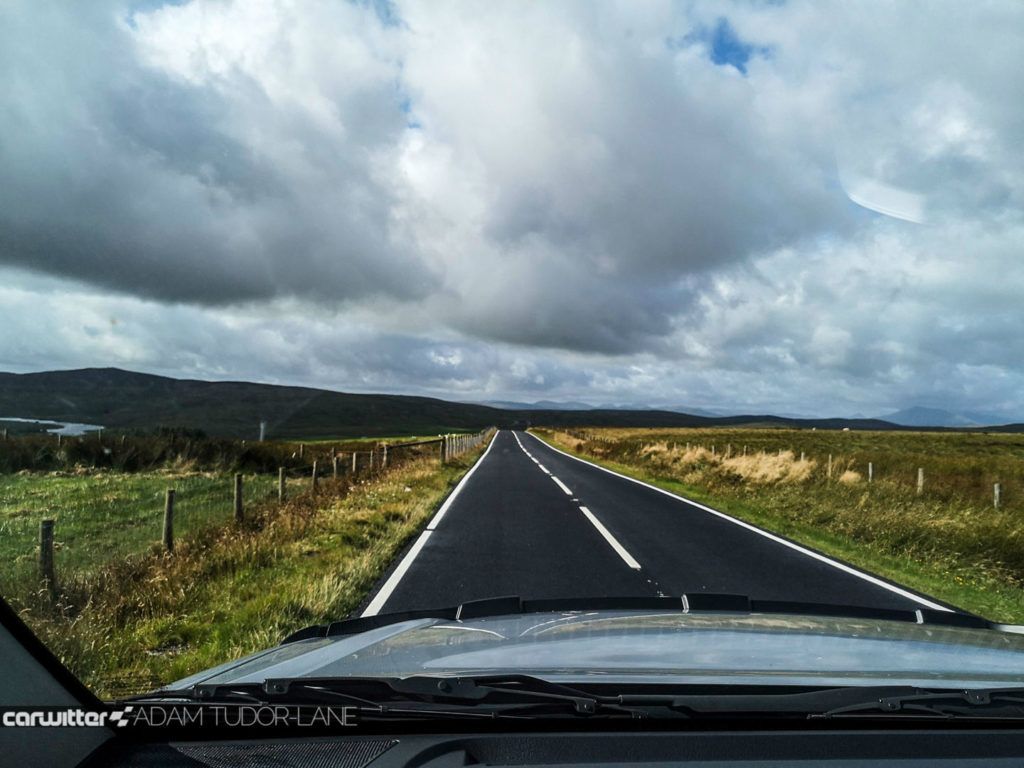 Where the XTR comes into its own is when you turn it off the pristine asphalt and into say, some woods. Here the Pirelli Scorpion tyres and increased height give you an unstoppable machine, moss-covered logs, streams, mud ruts, thick vegetation – you name it, and the XTR keeps on plodding though, no matter what. 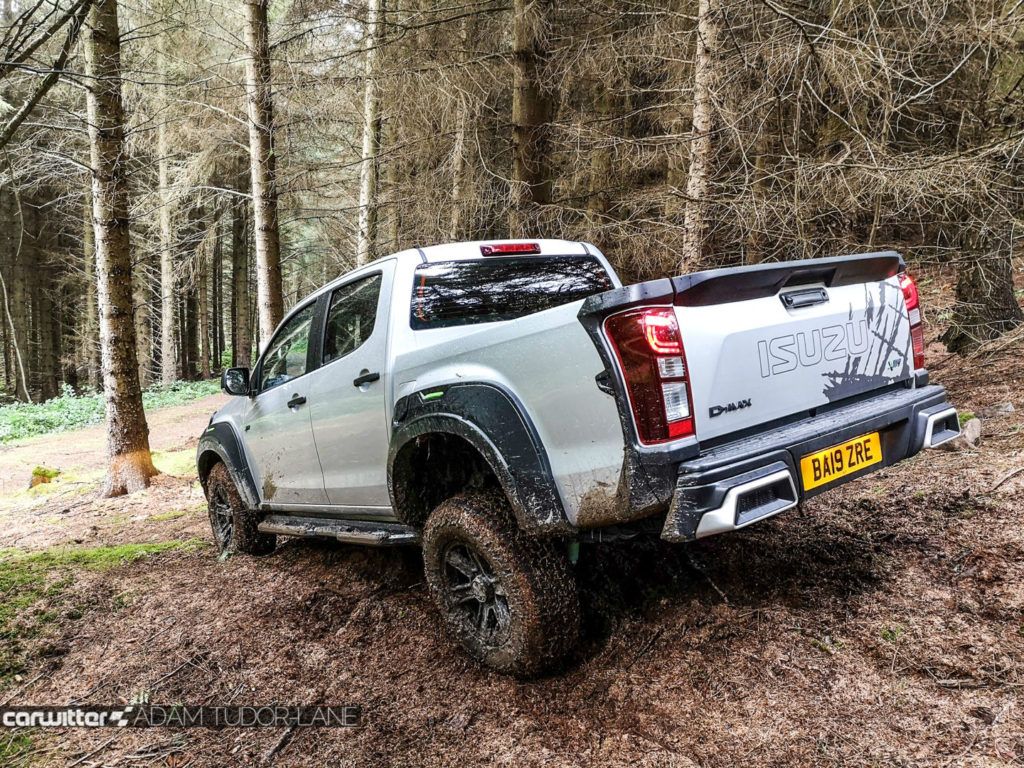 Next up a slate quarry, with its sharp, pointy daggers stabbing up at those soft rubbery tyres, low grip throughout with deep water sections to navigate. Being guided through by a pro driver, the XTR ambled its way up and down inclines that would make you wince if they were muddy, slidey slate is another thing altogether.

And this is what it looks like from the outside…
The noise is awful when it slides 😩#Isuzu #XTR #IsuzuXTR pic.twitter.com/BDybmTIGrt

Hill descent beavered away keeping everything in check, through slips and slides grip was somehow magicked out of thin air to keep us safe. The route deviated through sections where the trodden path vanished, huge great lumps of rock and slate lay before us looking like nothing I’d ever taken a vehicle over before, you’d struggled to navigate it on foot. Yet still the XTR remained puncture-free and traction rich. 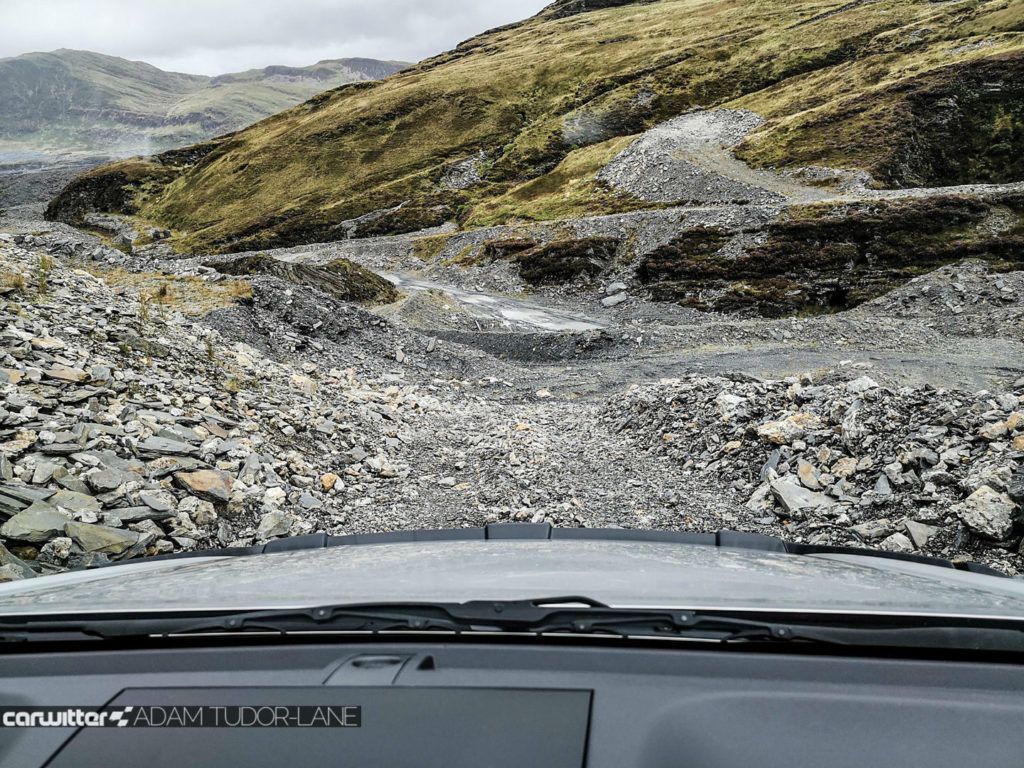 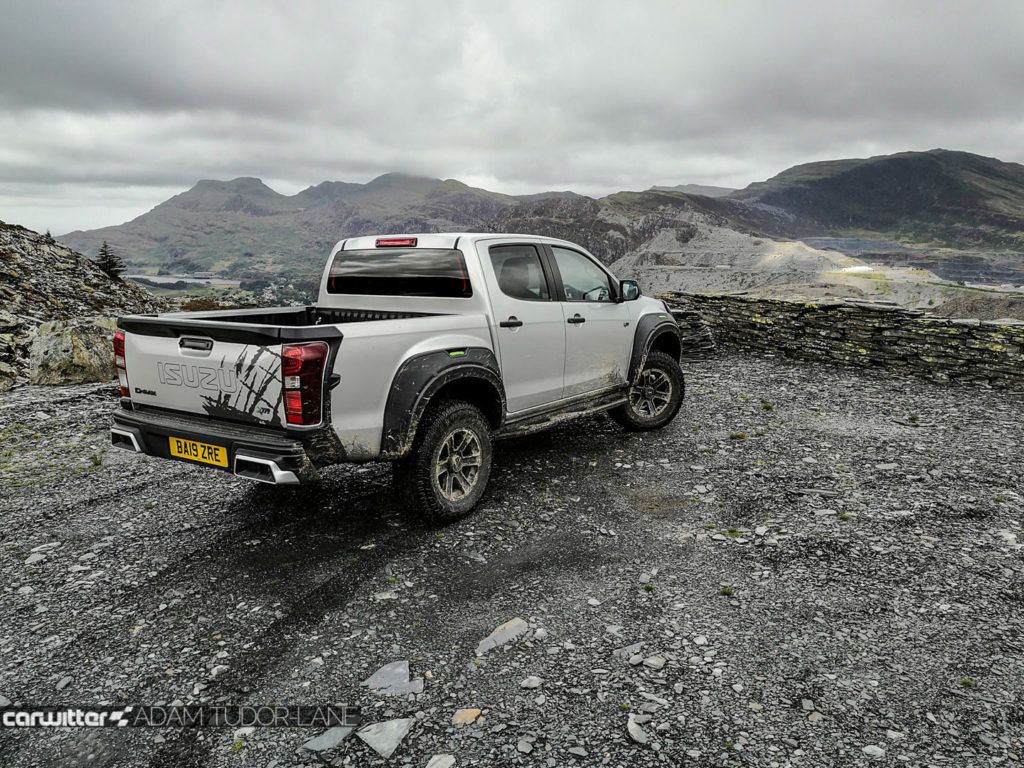 After both off-road adventures, we drove straight back onto tarmac in a flurry of mud…or slate. The same cars that got us to each location manoeuvred through them safely then returned us to our final destination.

Normally on launch events you get out of your road cars and into ‘off-road’ vehicles, not so here. This was a true test of the XTR’s adaptability. 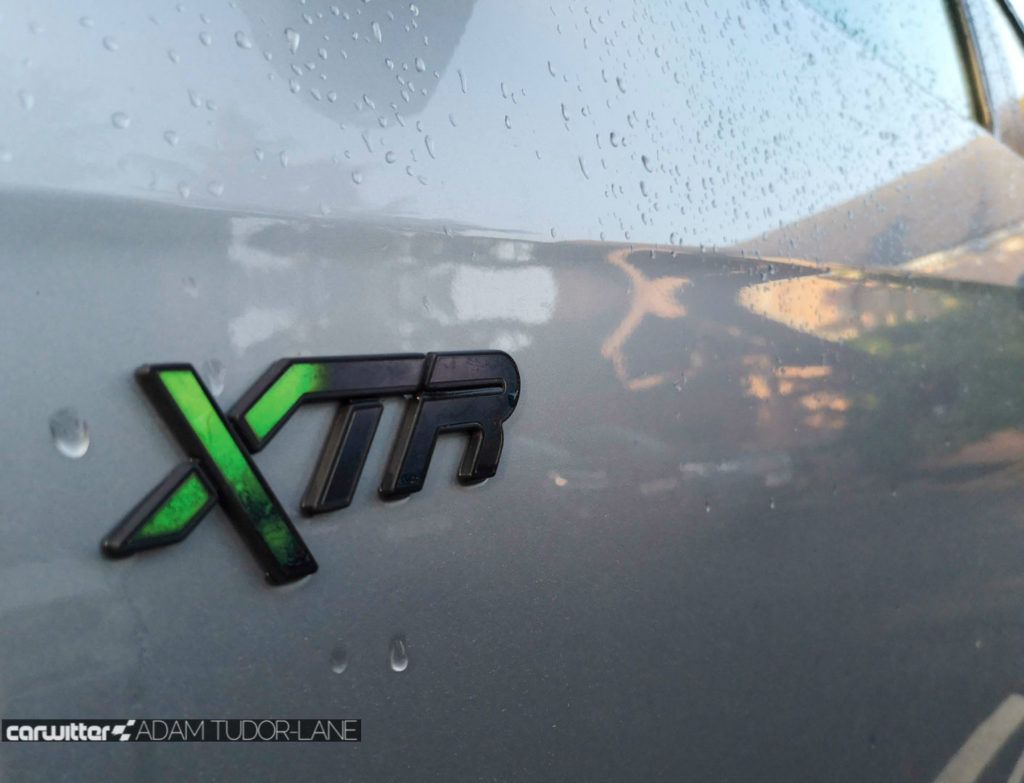 The ‘auto box is far easier than the manual, you really have to work the latter to keep it in the right power band, the gears seem awfully short when doing it by hand. It’s also got one of those ‘stir it’ type gear shifters, things are far apart and vague at best. Not close together and tight as the external looks might have you believe, in that respect, the new Mitsubishi L200 fares far better. 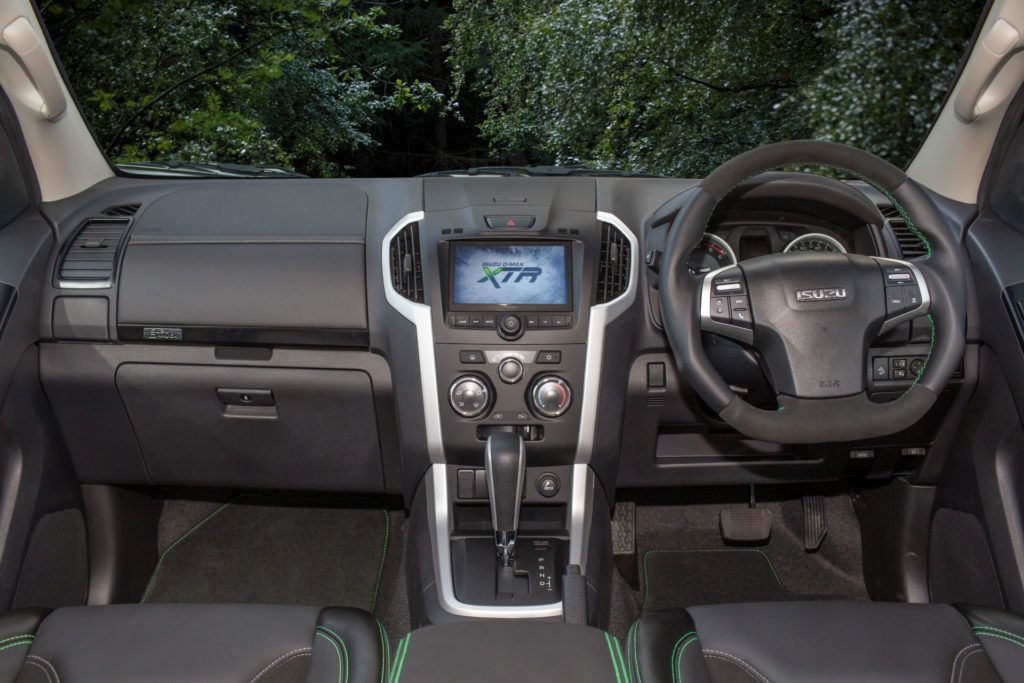 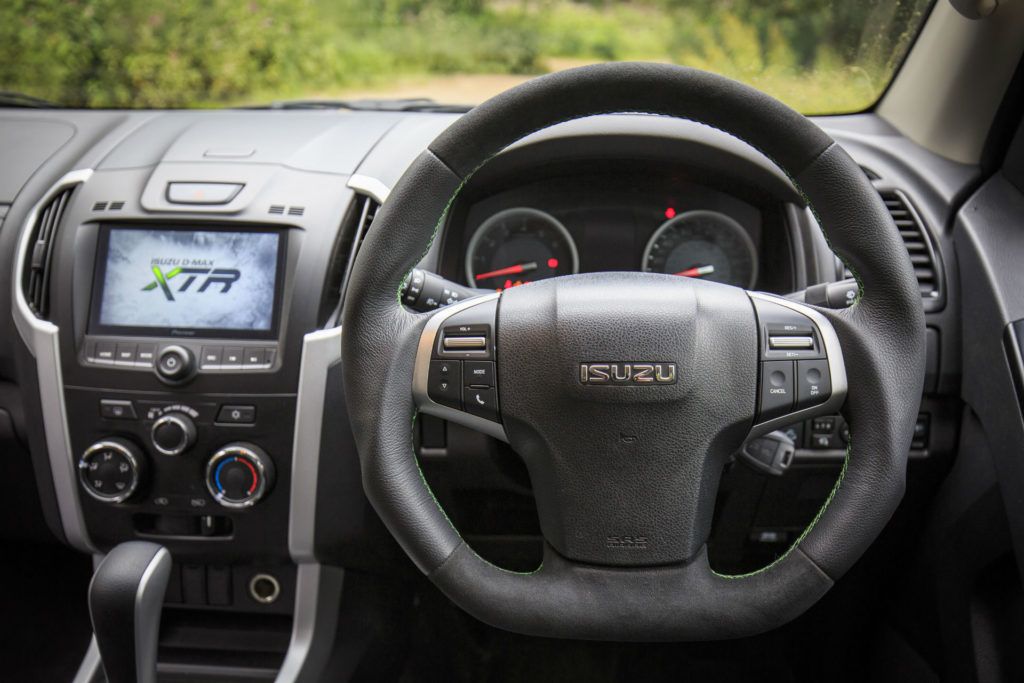 Inside you instantly notice the new sports seats, leather side panels with suede centres and contrast stitching set the XTR apart from the rest of the D-Max range. The middle rear headrest has the XTR logo embroidered on it, as do the floor mats. Even the steering wheel features leather and suede across its D shaped rim, it’s finished by hand don’t you know.

There’s the option of an Alpine stereo which features the larger infotainment screen, it’s probably the one to go for as the normal one looks a tad basic by comparison. 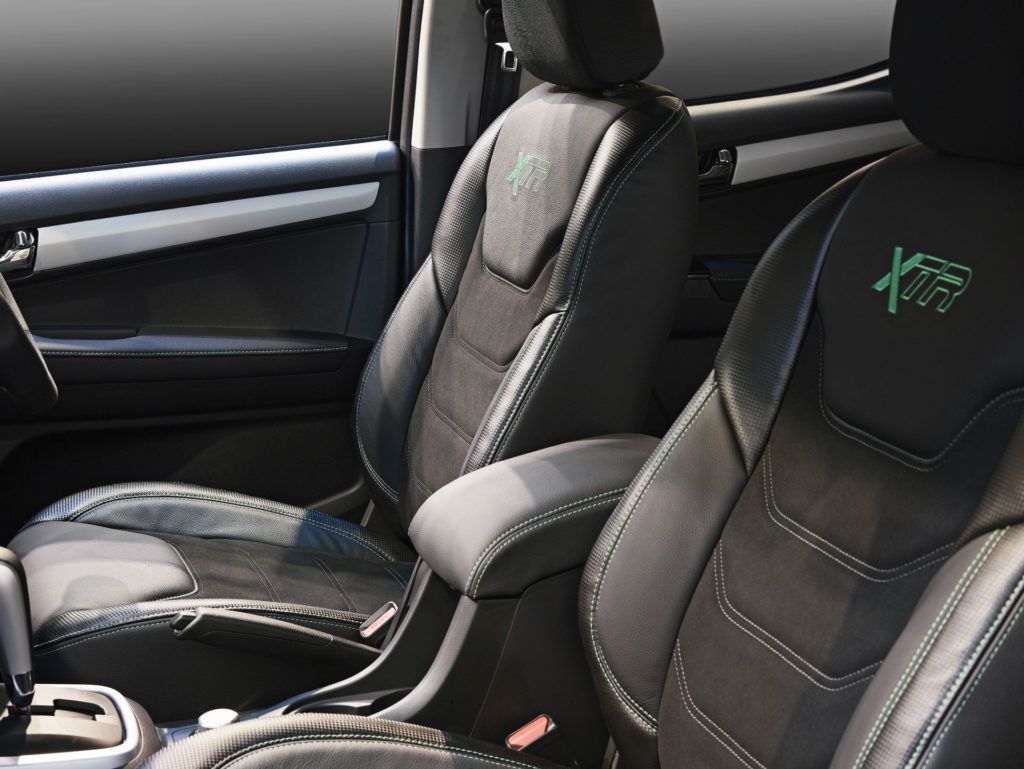 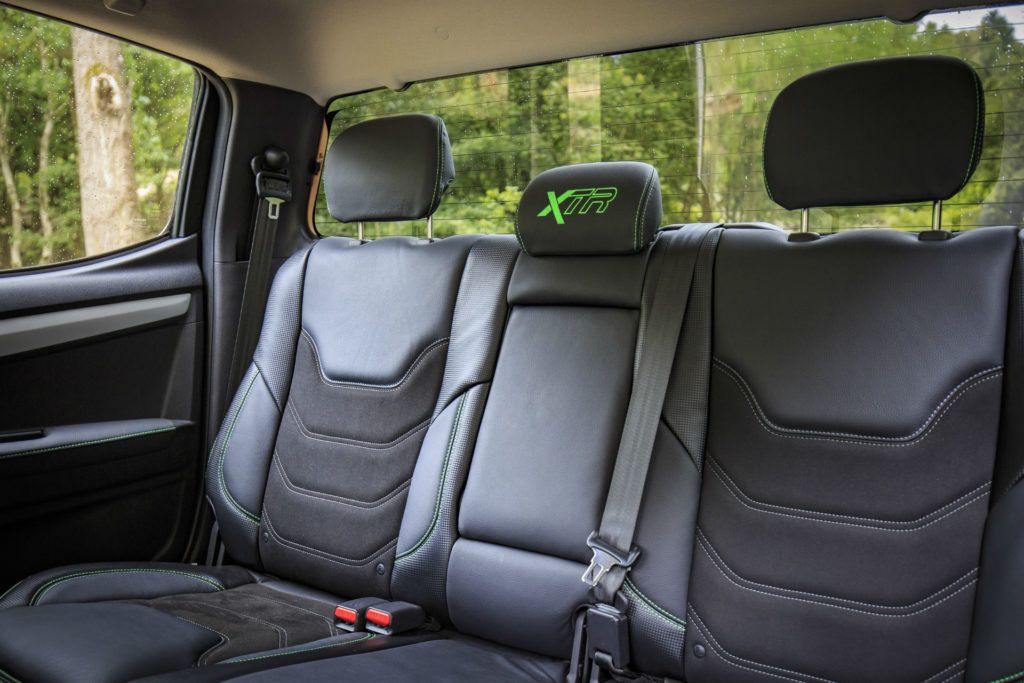 The heated seat switch is oddly placed behind you to the right-hand side on the rear backrest, left for the passenger. It’s a three-stage affair and lights up, but it means you have to take your eyes off the road, look down and behind you while pressing it to see what level you have it set to. Literally any other configuration would have been better than this.

As for the rest of the interior, it’s standard D-Max, nothing else really jumps out at you or is radically different to the fairly basic nature of the vehicle it’s based on. 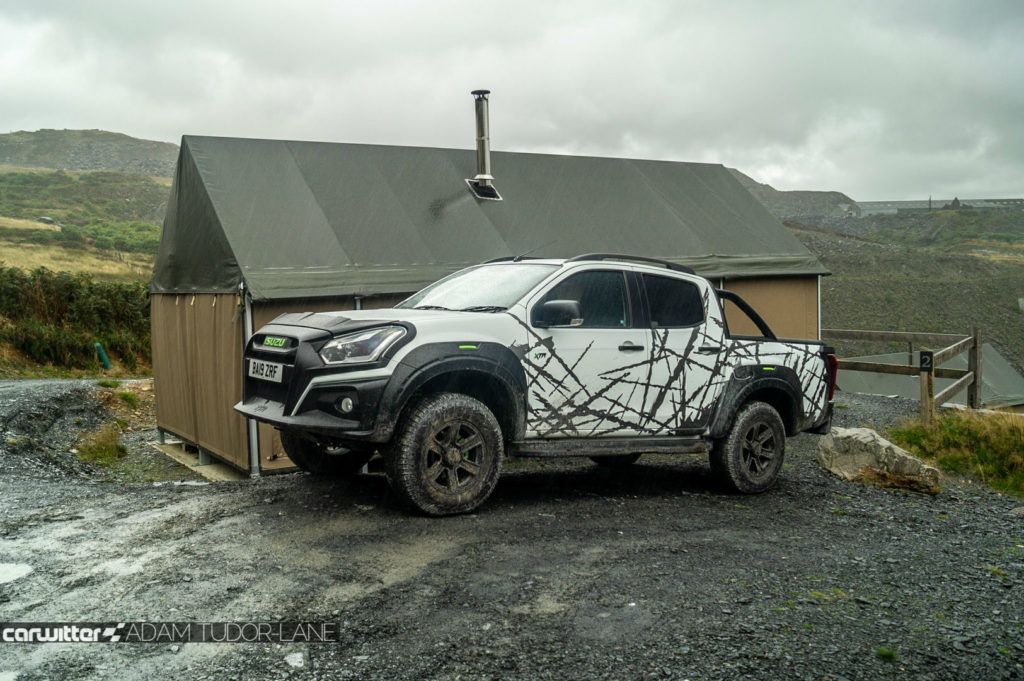 If you want something totally different and out there, something that’s going to give attention wherever you go then the XTR is for you. Taking it off-road showed its pure adventure, thrill-seeking nature, but as to how many of them will be used for this the numbers are probably incredibly low.

Isuzu are only hoping to sell a few hundred of these a year, they’ll be a rare sight, the trickle-down from generating interest should boost sales of their most luxury ‘Blade’ model. But there’s something ballsy about the XTR that just has to be loved, well done Isuzu.