It’s not often a manufacturer hits the nail so squarely on the head first time round. But that’s exactly what Hyundai have done with their all new i30N. It shows what can be achieved with clean sheet thinking, a generous budget….and a little help from an ex BMW M Sport head honcho.

Now the i30N isn’t perfect, I’ll go into that later, but it is an exceedingly good all-rounder. 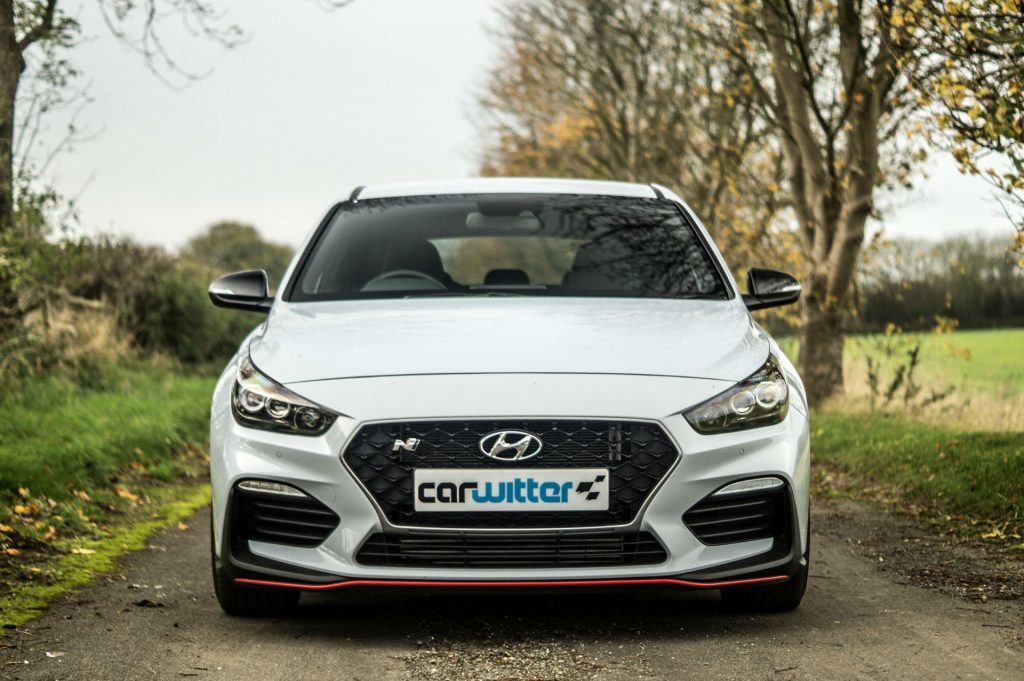 For some reason Hyundai have released a stripped back, lower powered i30N. Following suit just as SEAT and Peugeot did, before swiftly dropping them from production after barely selling any units.

No doubt it’s to get punters through the door, as the price is rather attractive at £24,995. But you don’t want that one.

That’s the lower powered 242 BHP model, which goes without the electronic limited slip diff, bigger brakes, a roarty variable exhaust, larger wheels and Pirelli P Zero tyres. Torque is the same no matter the version, but power jumps to 271 BHP with the Performance Pack model.

0-62 times differ between the two, the more potent managing the sprint in 6.1 seconds as opposed to 6.4 for the inferior model.

So realistically the i30N is £27,995. That’s still cheaper and more potent than most of its competition, a cunning move on Hyundai’s part. 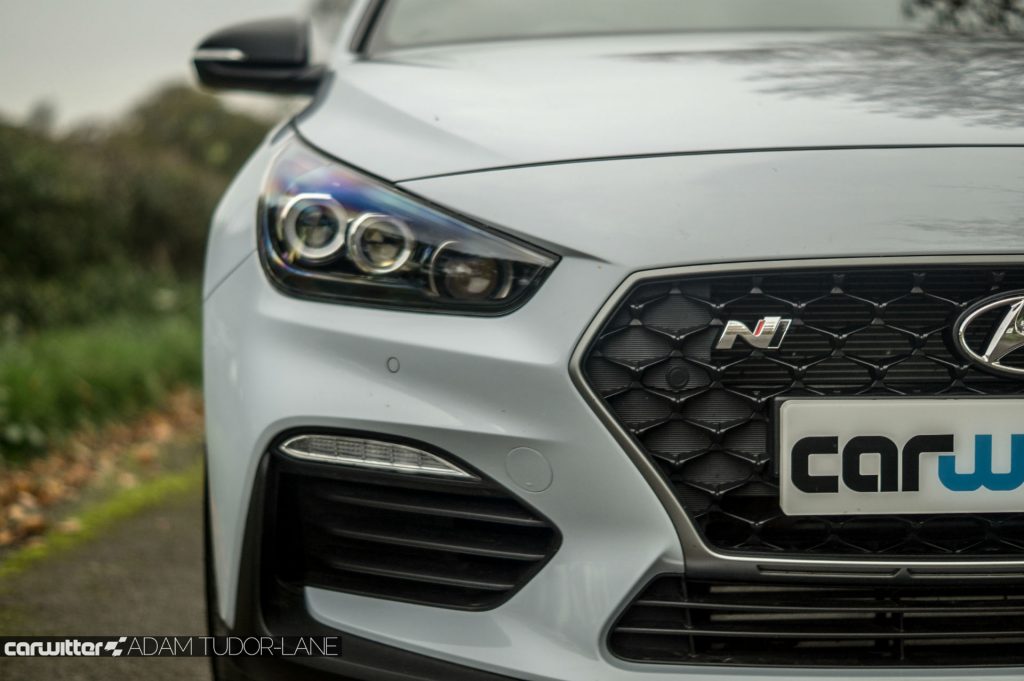 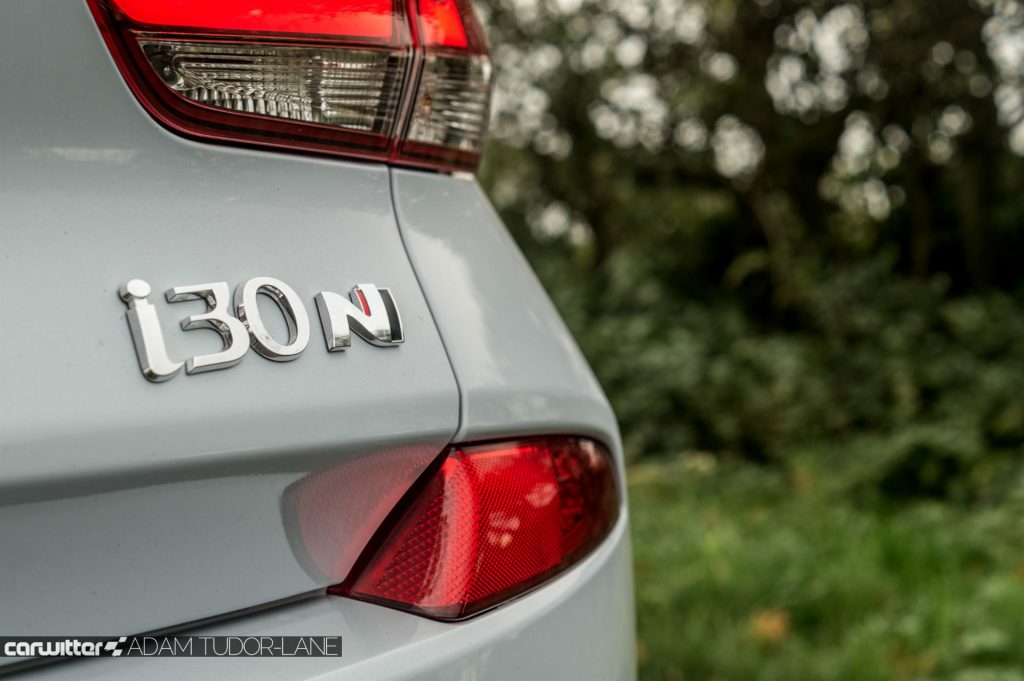 When Hyundai first announced a hot hatch I took a look at the i30 and thought…really? It’s a car your Nan and Grandad would buy. Dull colours, shod with chrome and fitted with frugal, lacklustre engines.

Add some new bumpers front and back, a spoiler here, some darkened lights there and the whole appearance is transformed.

It’s still subtle, not aggressive (as Hyundai point out) but it has that special look about it. Something different that hints at its sporting prowess.

Nice features include the triangular shaped third brake light, and the additional stick on aero lines on the rear quarter. The red detailing around the lower front and rear bumper is another nice touch. 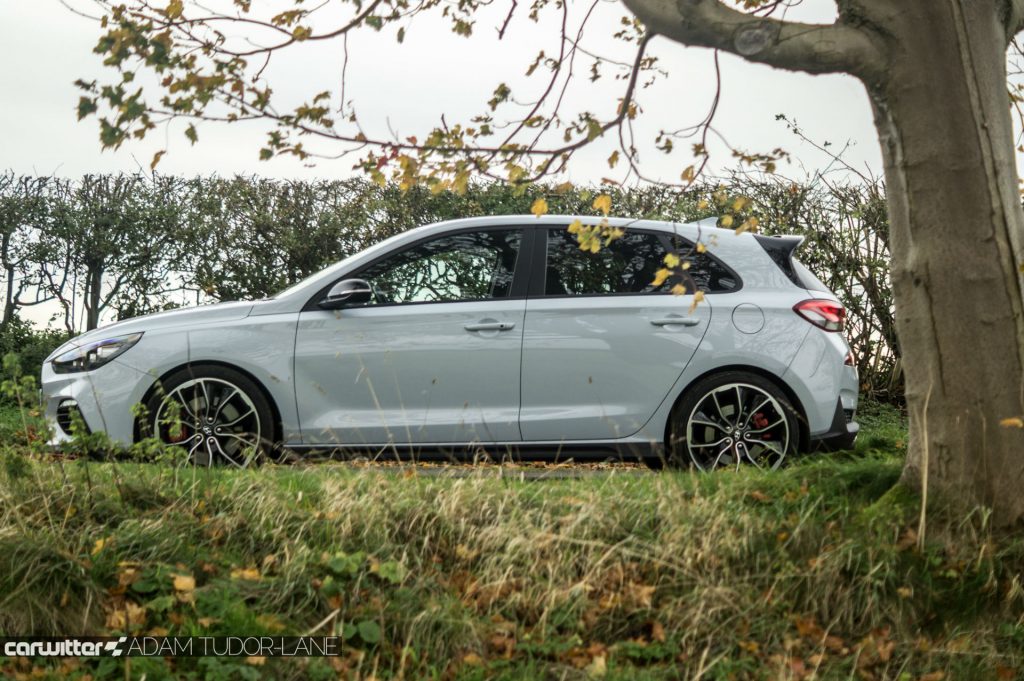 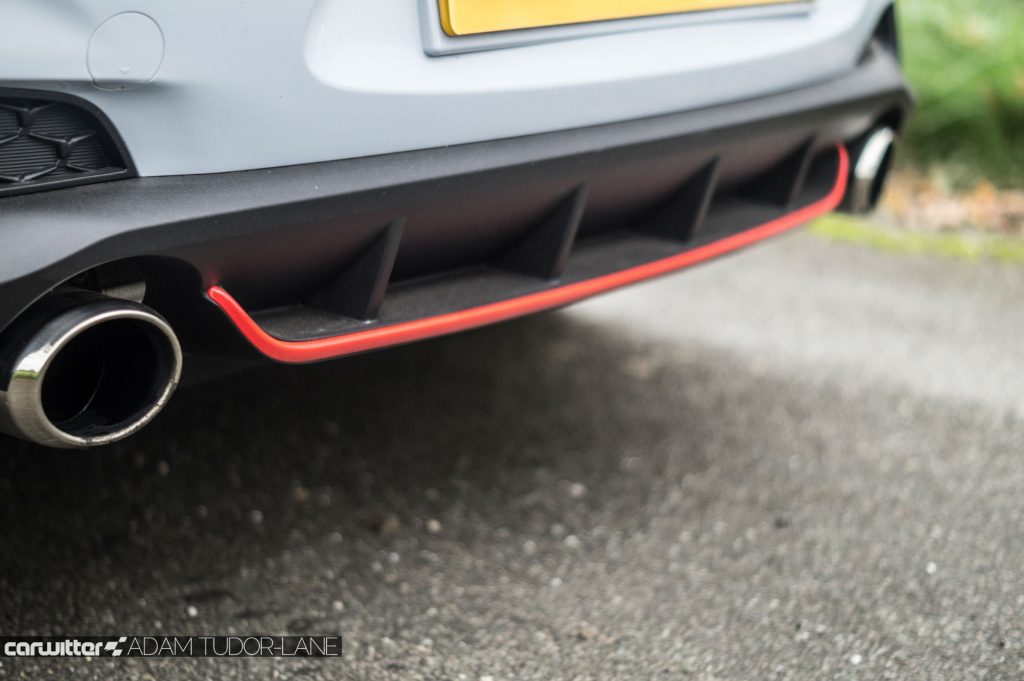 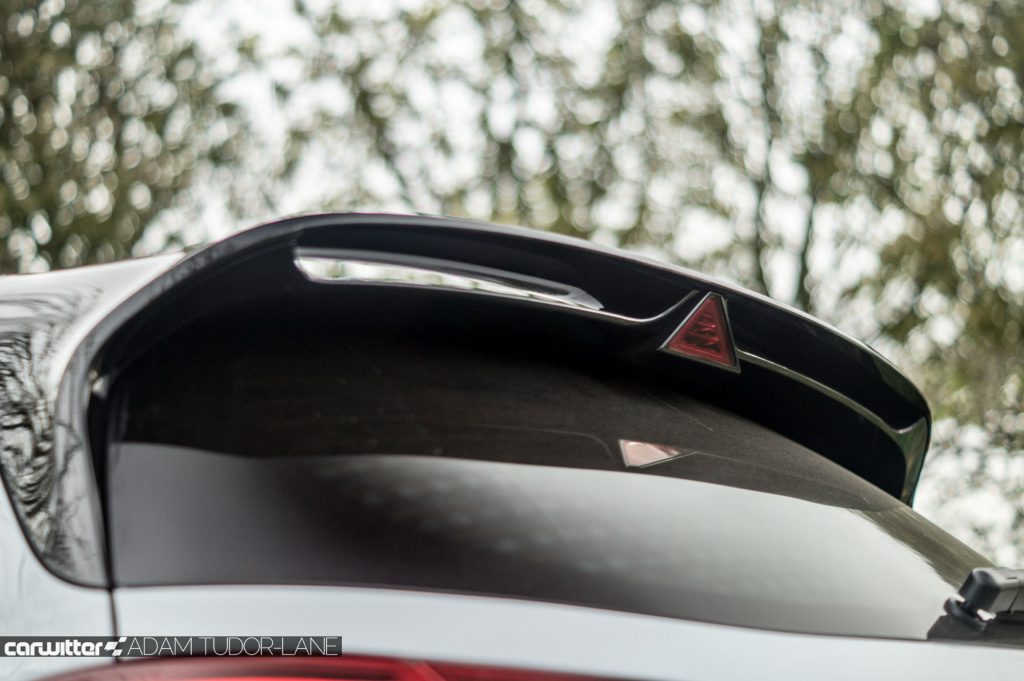 Hyundai have talked this car up, and then talked it down. They stated they weren’t going for ‘ring records and weren’t trying to compete with the other players in the segment. So why bother?

Well it can be summed up by a gimmicky line in their presentation ‘BPM not RPM’.

They want the i30N to be an all-rounder, for you to get to nine tenths safely and in a useable manner.

Needing to be as comfy as a boggo hatchback, but able to attack Silverstone if you so desire.

Now I’ve lauded the FK2 Civic Type R as the best hatch in a generation. It’s firm, unforgiving, a bit of an animal. For me that’s what a hot hatch should be about, in my eyes you want a semi track prepped race car for the road.

But as we’ve seen in the latest generation Civic, buyers seem to want a woollier, cuddly type of performance hatchback. This is where the i30N mops up its competition. 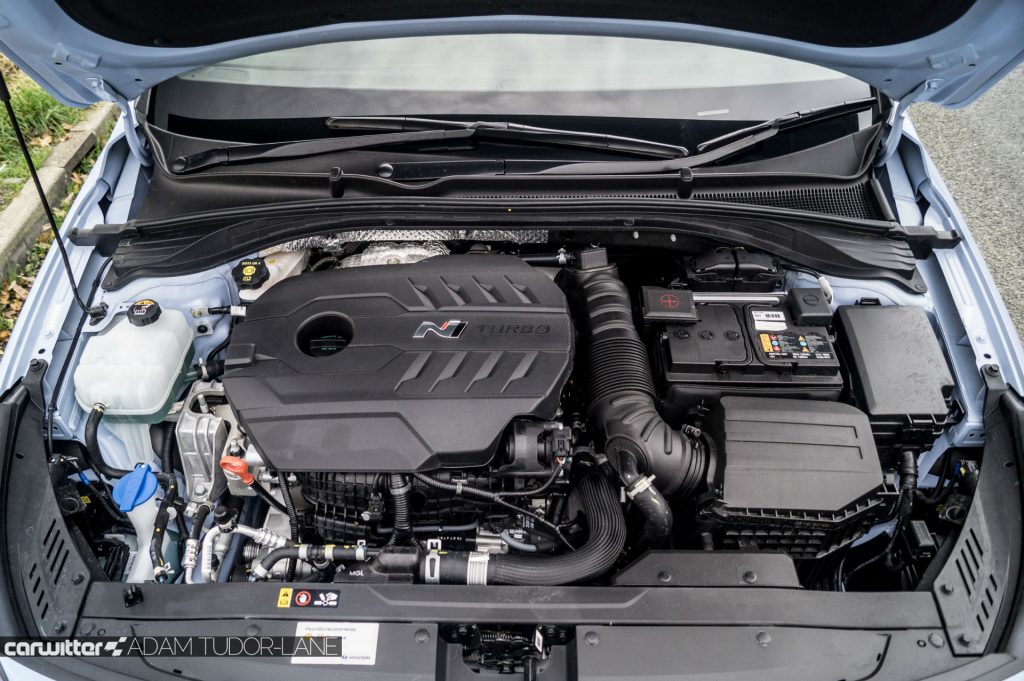 Let’s start with the power delivery from that 2.0 litre turbo charged lump up front. It’s not as savage as the last gen Type R, or even the 308 GTi. It’s smoother, less digital in the way those horses are delivered to the ground.

Torque steer is negated to zero, and I mean zero. Even burying your right foot from stationary, wheels slightly turned, there’s no tugging or fighting as you’d get in a Type R or 308 GTi. That’s a good thing, it’s calm and controlled…but it has a negative effect that I’ll get to later.

As with the Type R you get rev matched downshifting, perfect for posers who can’t heel and toe. It can also be switched off for the more hardened hot hatch aficionado.

The gearbox is nice and tight with a short throw, adding to the well-honed performance aura of the N. 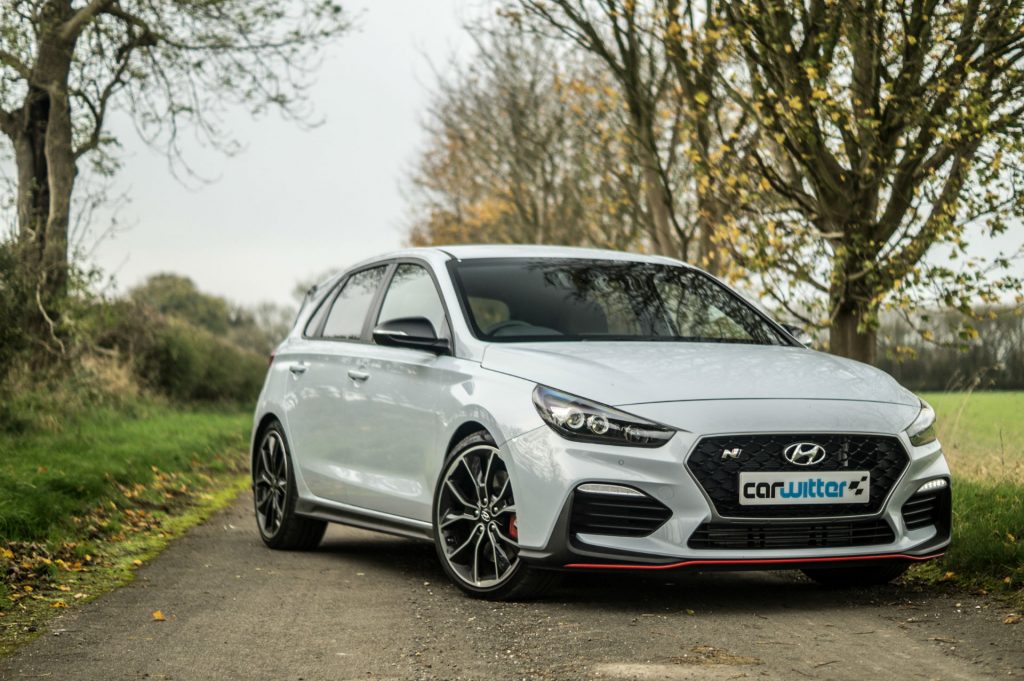 Ride is mind bogglingly good. In ‘N’ mode the trick dampers are near enough solid. You’re bumped up and down in your seat as if sitting in a race car. Switch into ‘Normal’ and 90% of those imperfections are gone. In seconds.

The i30N changes up from track weapon to comfy cruiser in an instant.

There’s the ability to set a ‘custom’ setup, so you can switch the different elements into ‘N’ mode but leave the suspension softer if you desire. Far more pliable than Honda’s simple On or Off R+ button.

The i30N is also pretty nimble, light and balanced. It takes a lot…or a mistake…to get the N to push wide and understeer. When it does, a simple lift will pull the nose back into place. It’s very forgiving and won’t run away with you. The type of car you can safely play around with, it won’t bite.

Through corners the N also stays extremely flat, with just micro levels of pitch and yaw whether on track or on the road. This enables you to get on to the power ridiculously early, having full faith in the diff below to suck you through the corner. 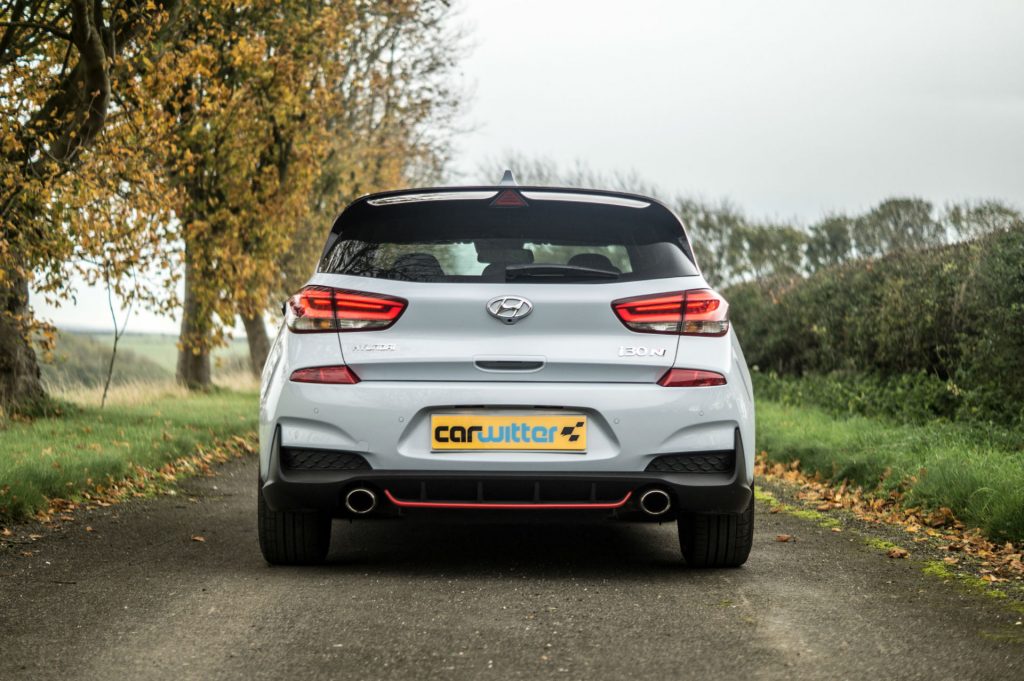 Now for the complaint. Steering feel. Negating torque steer and axle tramp is all well and good, but to do this the steering suffers. There’s little sensation through the wheel. Granted you can place the i30 with ease, but it feels somewhat Playstation…like you’re not actually there.

Turn in isn’t as instantaneous as its competitors either. There’s a fair few degrees to be had off centre before you get a reaction. Again, that’s down to personal preference, a quick, sharp rack can make a car like this feel twitchy and on edge.

Weighting is nice though. In normal mode everything is easy and light, move into N and the weight piles on admirably.

You also get a rather fruity exhaust note. Lifting off at anything over 3,500 RPM results in a double or triple backfired. Partly due to opening valves, and the rest is a fuel drip system that creates the bangs. So it’s manufactured, but it does half sound good. 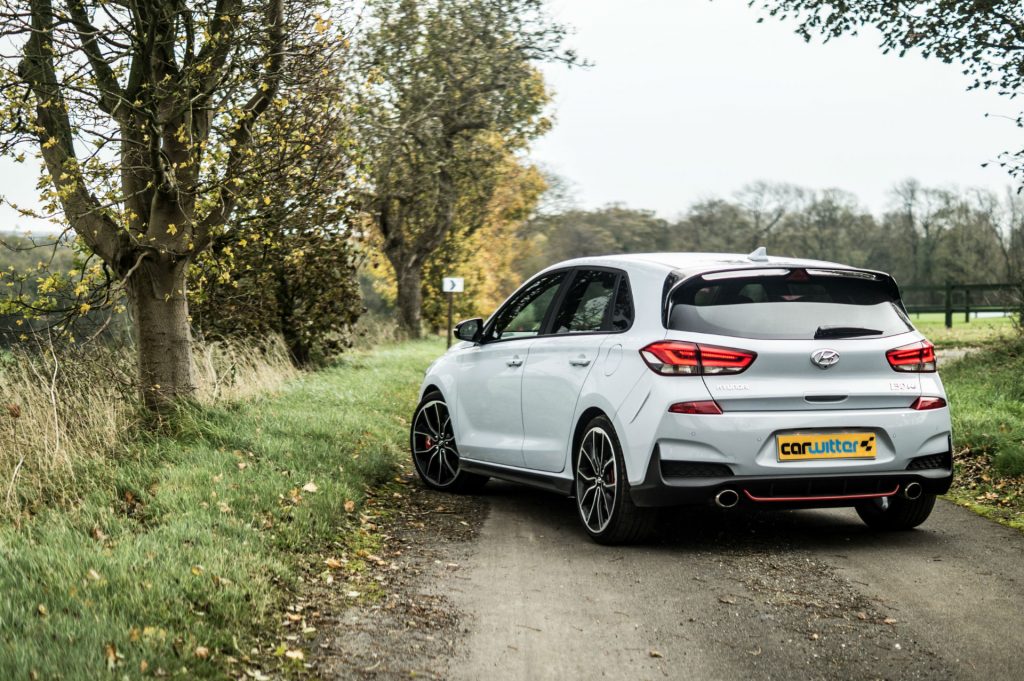 Inside is a much more sedate affair. The only real special additions are the blue stitching on the seats a sparingly small scattering of N badges.

The most important new feature are the light blue driving mode buttons, nestled between the spokes in the wheel. 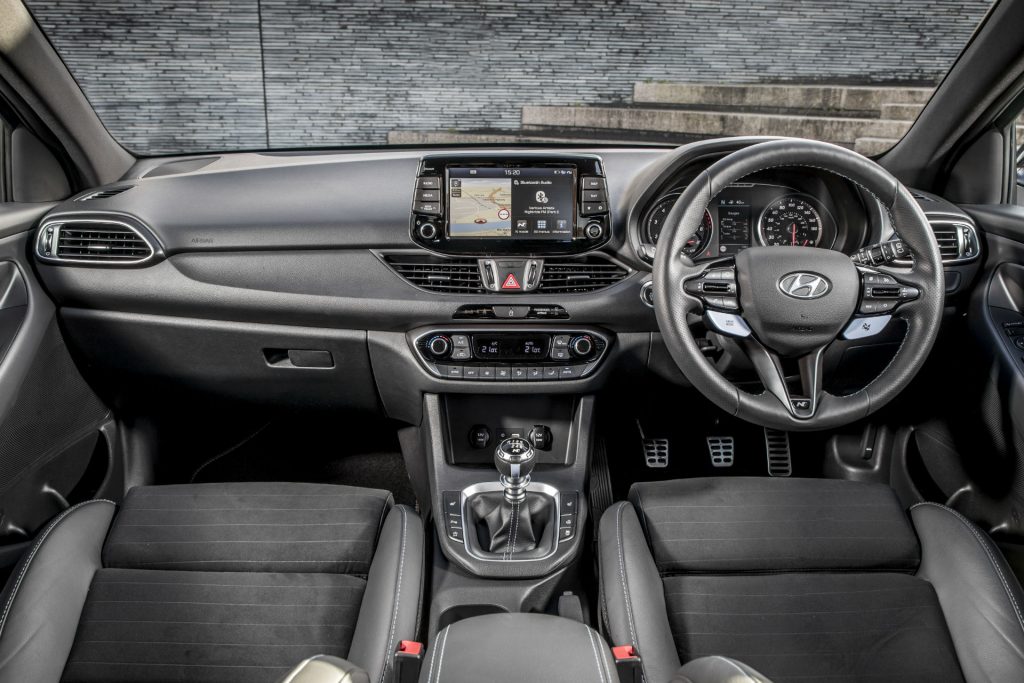 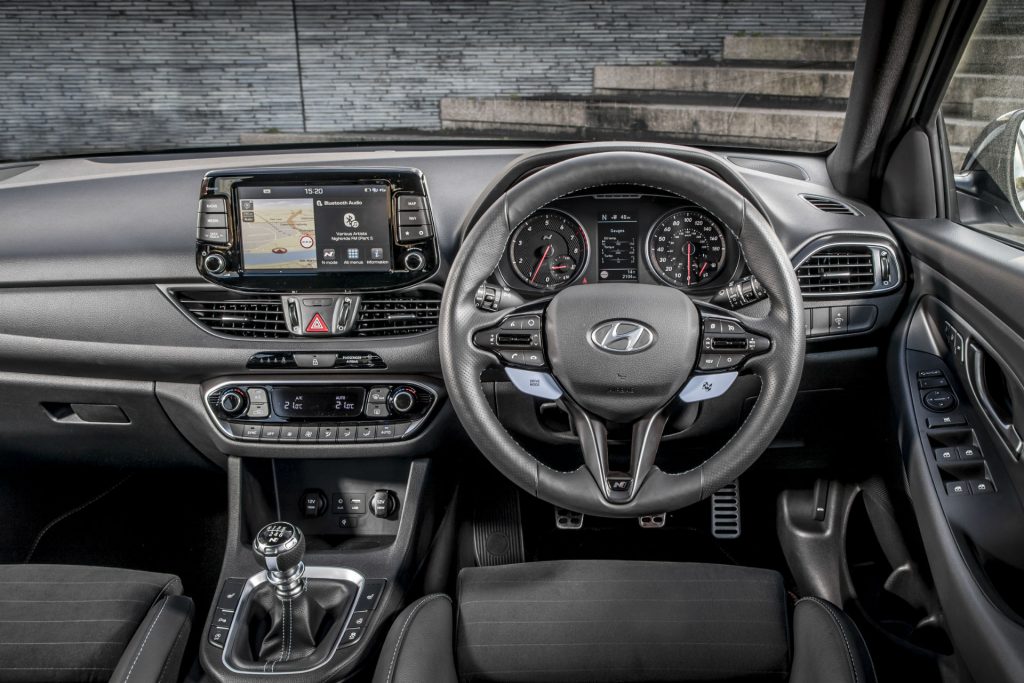 In the boot you’ll find a removable strut brace behind the rear seats, which is a cool touch. Other than that the N is rather standard i30 on the inside.

A weight saving worth noting however, is that the Performance Pack upgrades the seats to electronic full leather jobbies. But you can downgrade these to fabric, manual ones. In doing so you’ll save roughly 13kg. 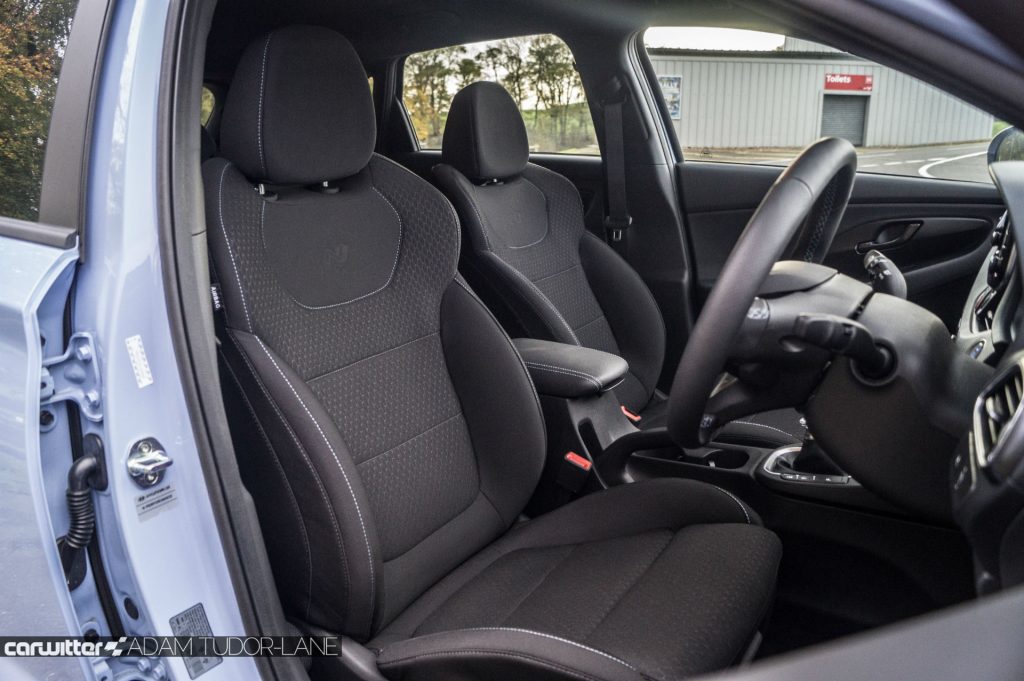 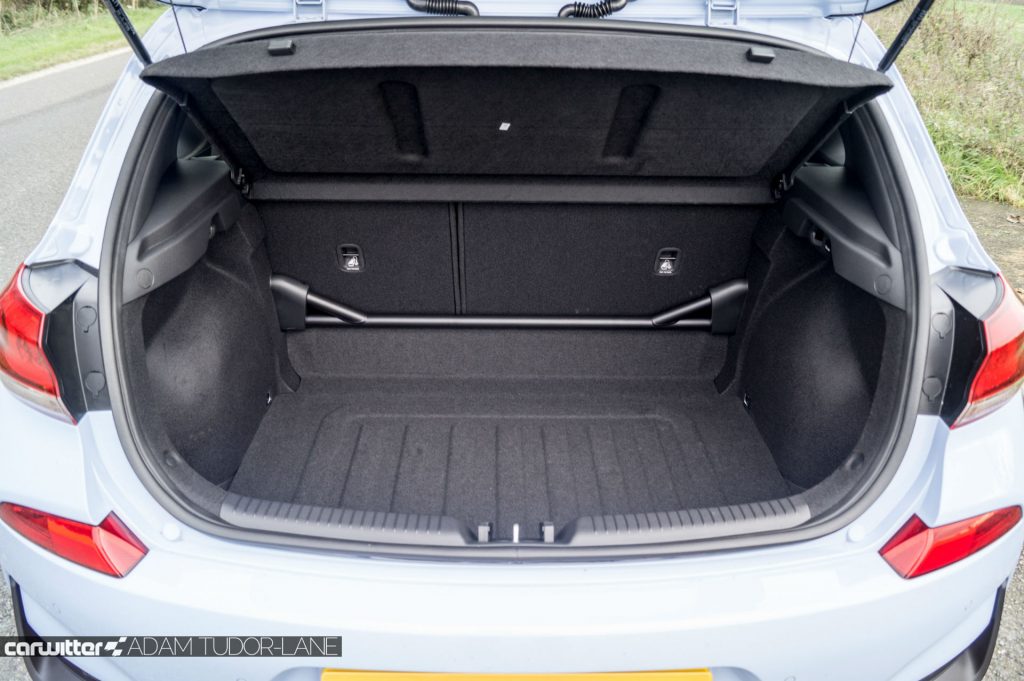 It’s rare for a hatch at this price point to have trick adjustable dampers, an electronic diff and an active exhaust system. These are the quarry of £60k performance Audi’s. And yet to undercut the competition it’s surely got to move the game forward, for the better.

Hyundai have undoubtedly made the best all round hot hatch currently on the market. Yes, we wish the steering feel was a little sharper, but that really is the only complaint.

If you’re in the market for a B road blaster that the Misses can also drive around town, the i30N is definitely worth a steer.

Oh, and that 5 year warranty Hyundai are so famed for. Well, that covers track use too. In the PR’s words ‘taking the i30N on track isn’t out of its normal parameters, so of course it’s covered’.

So if you put a con rod through the block at 6,000 RPM coming out of Stowe, Hyundai will pay the bill. 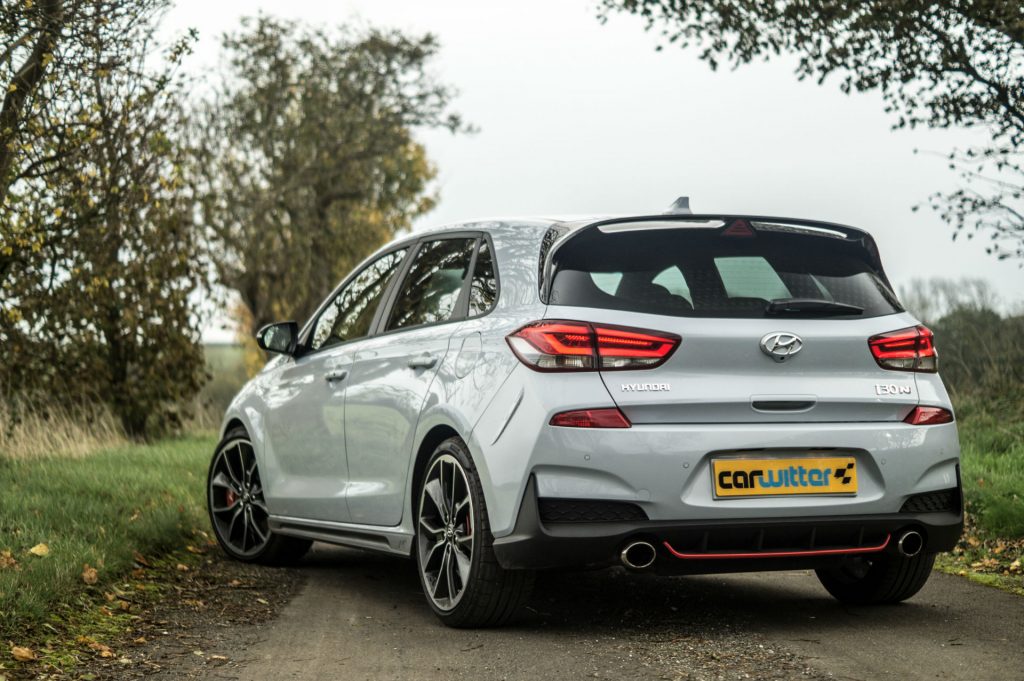 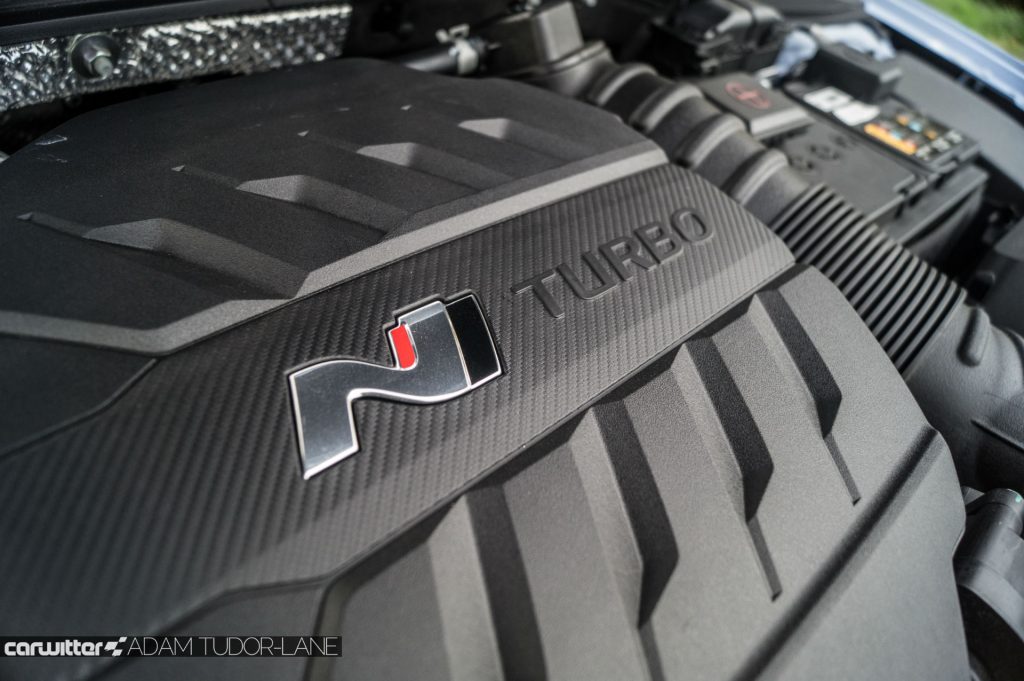 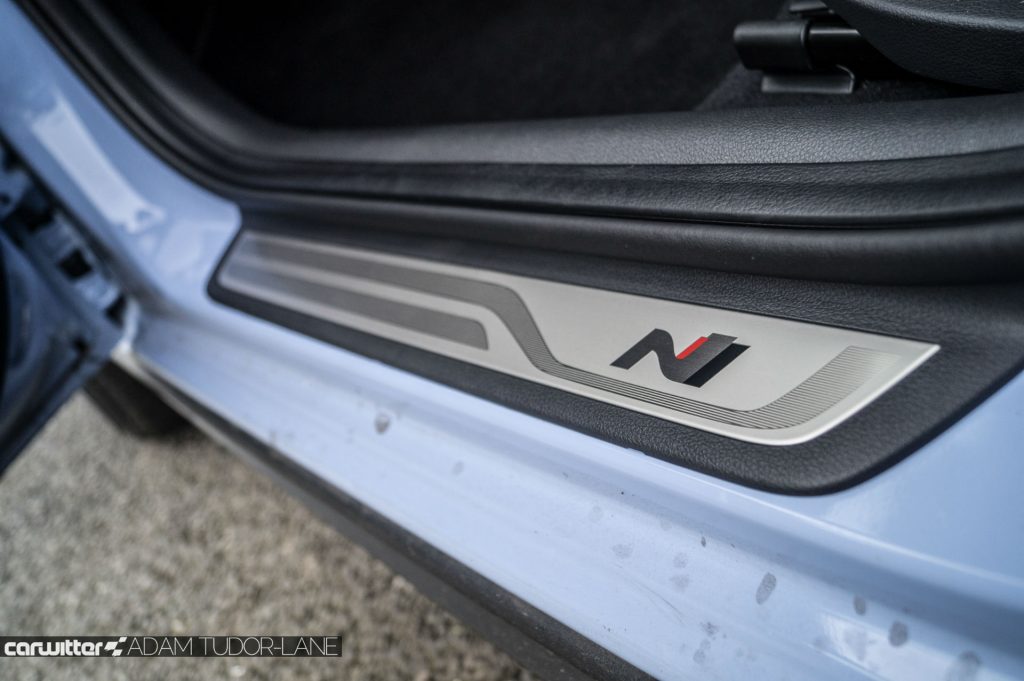 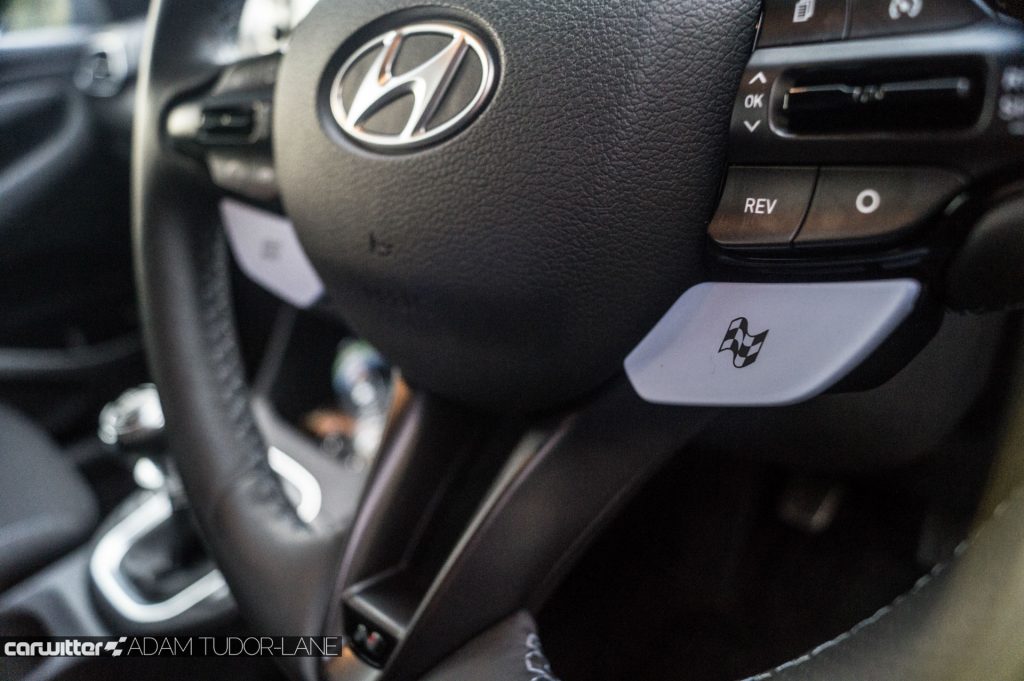