Now and then, a manufacturer will throw something different into the market. Going against accepted norms and bland design it doesn’t happen nearly as often as it should do. Honda already has form; they came out with the FN2 Civic after the EP3, it was like a night and day difference in terms of design language.

Well, they’ve done it again with the electric car segment, bringing the ‘Urban EV Concept’ to the streets in a little over three years. 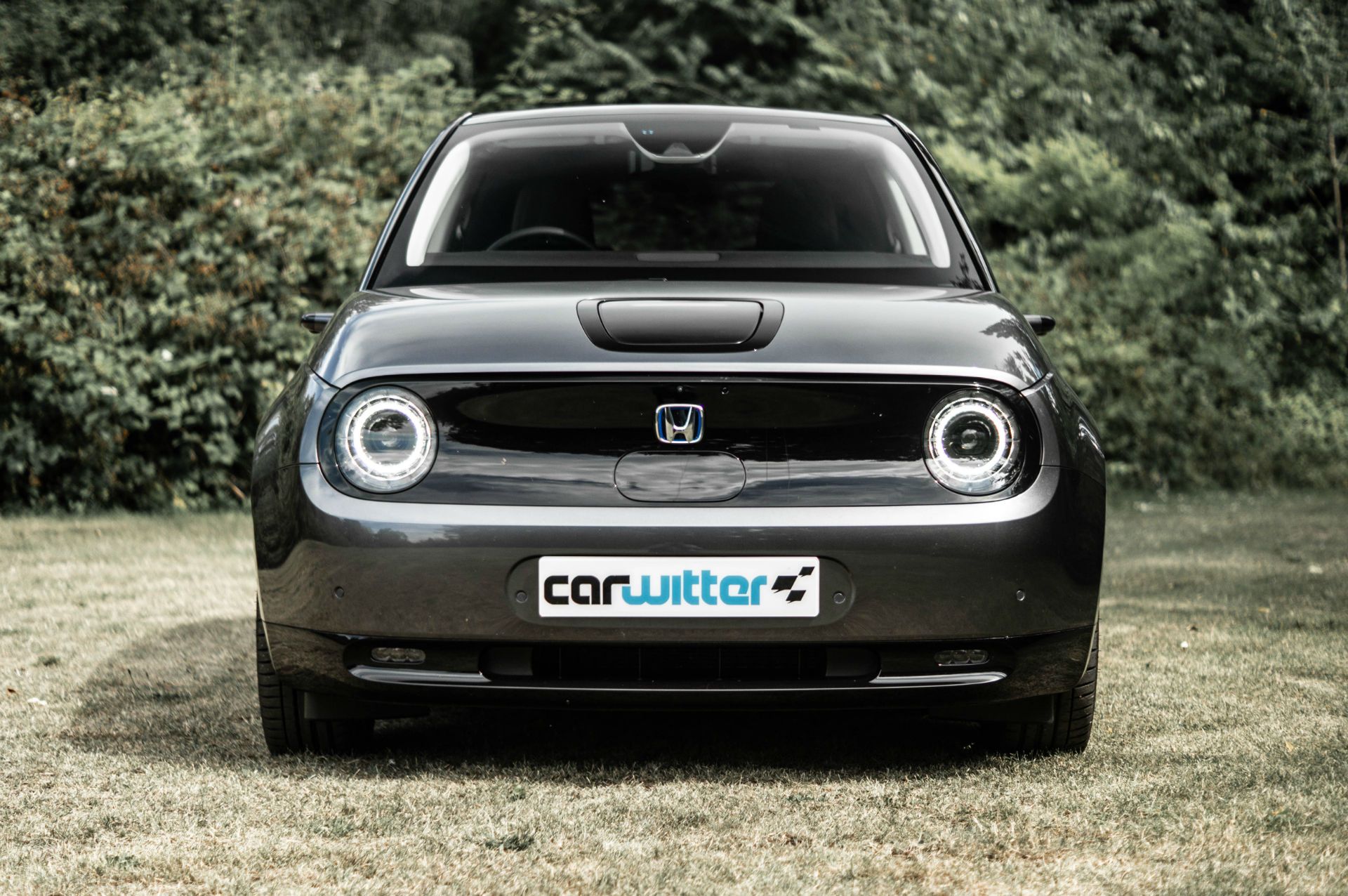 Retro modern in appearance the Honda e harks back to the original, 1973 first gen Civic. But to me it looks more like a MK1 Golf – it’s just something about the rear pillar.

Appearing slightly narrower than the bulging concept, overall, the design has mostly remained the same. A few tweaks have had to happen here and there, the front grille no longer says ‘Hello’, the arches are a little less flared, there’s no glowing Honda badge, and the headlights are somewhat different.

Cameras instead of wing mirrors remain, as does the incredibly modern interior.

I love it. But having tweeted my enthusiasm it wasn’t met with widespread agreement. Safe to say the little Honda is a bit of a marmite car. 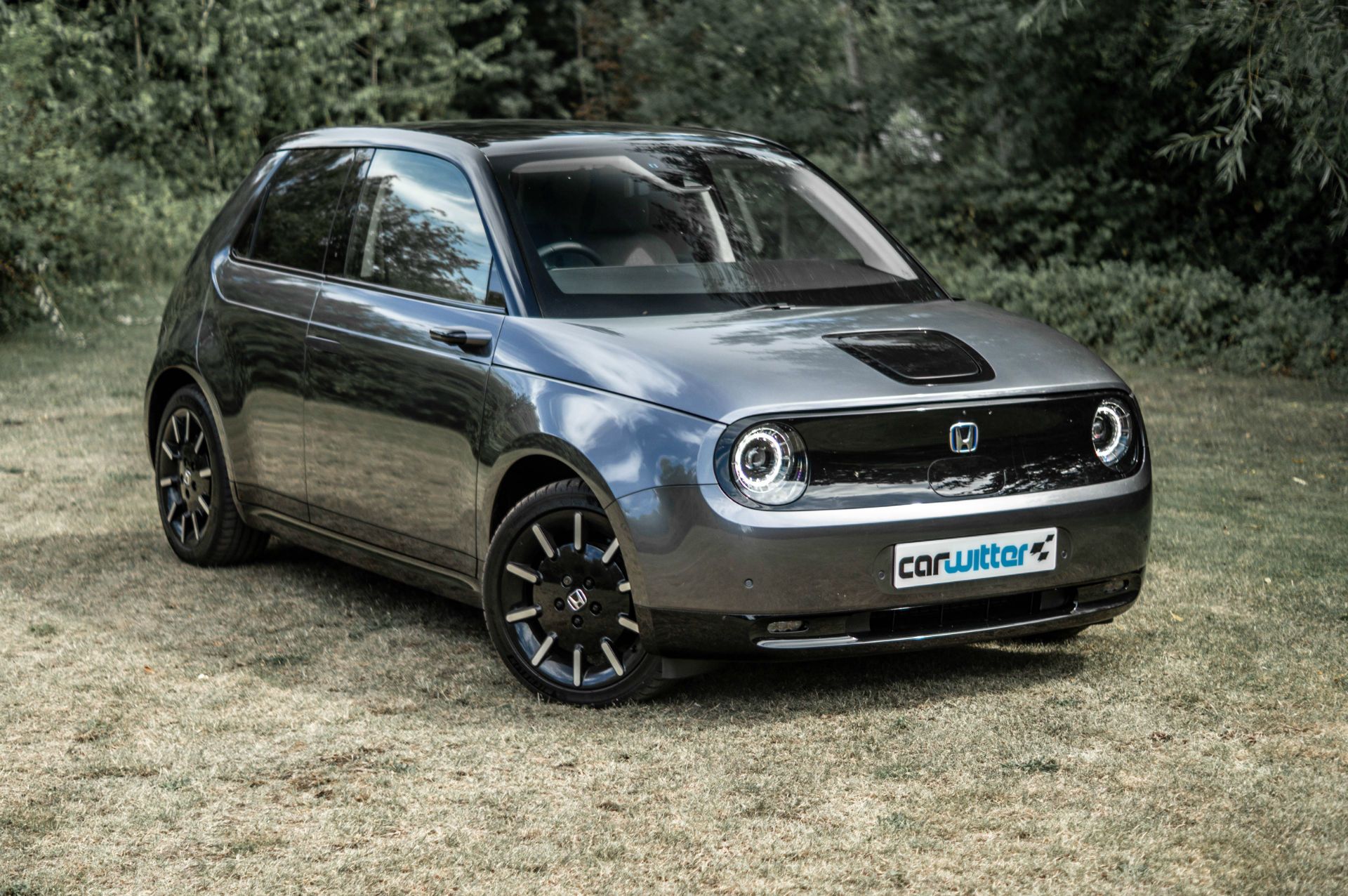 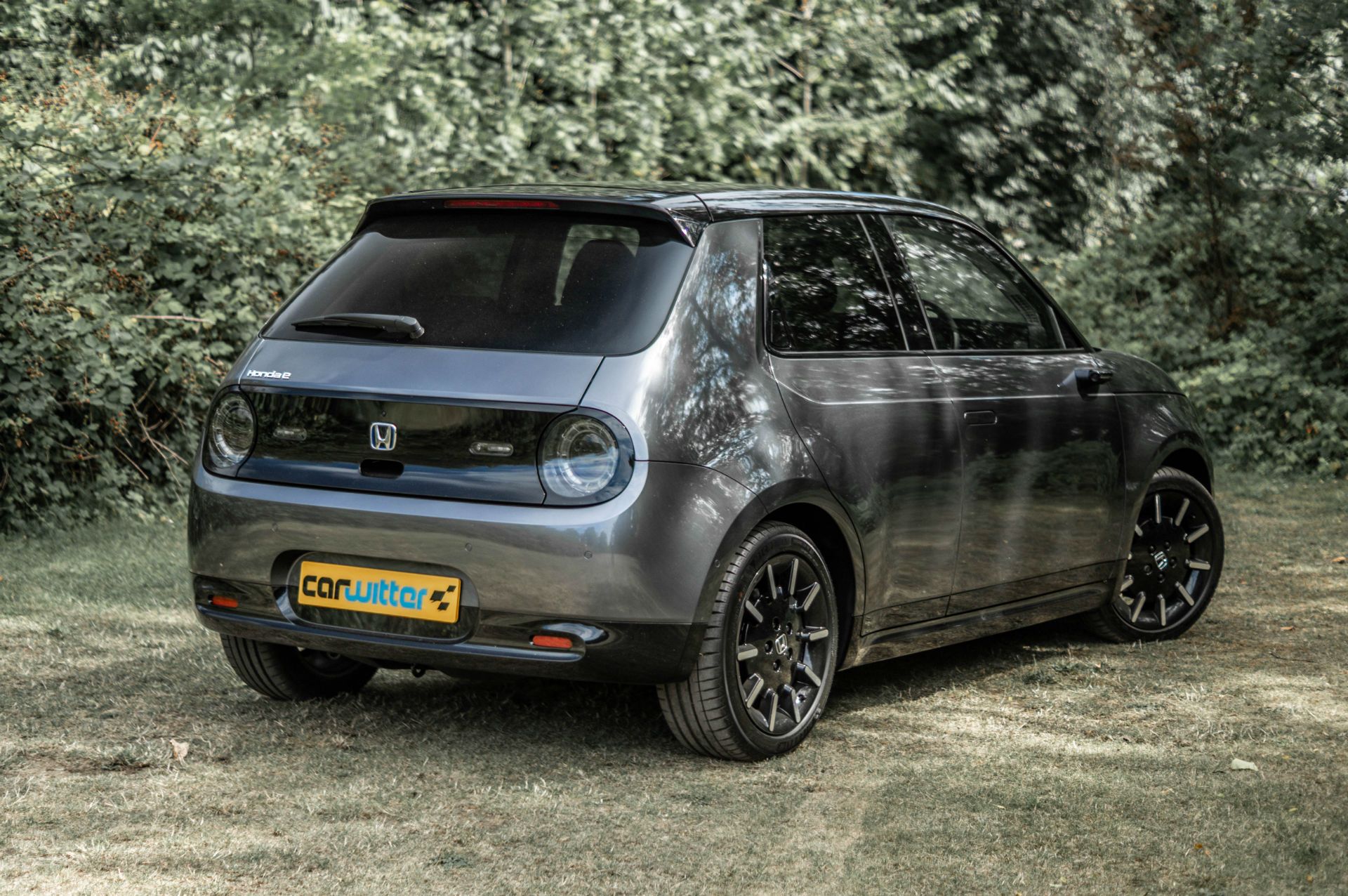 There are two different power outputs to choose from, either 136 PS/315 Nm of torque in the entry-level model or 154 PS/315 Nm in the ‘Advance’ version. This impacts the 0-62 time, making the former 9 seconds while the pokier one manages it in 8.3 – firmly a warm hatch with this turn of pace.

As with all EV’s you’re met with instant shove, this time however it’s from the rear wheels, get it on some gravel, and you can control a subtle slide before the electrical ‘fun police’ step in and snatch power away from your eager right foot. We’ll have to wait until someone hacks these for full-on doughnuts.

Having all the motor gubbins at the back means the front wheels can get some considerable turn on in tight spaces. You can pretty much ‘turn on a sixpence’ as my father would say, swinging round in the road on a wrong turn is easily achievable and matches the diminutive spritely nature of the e. 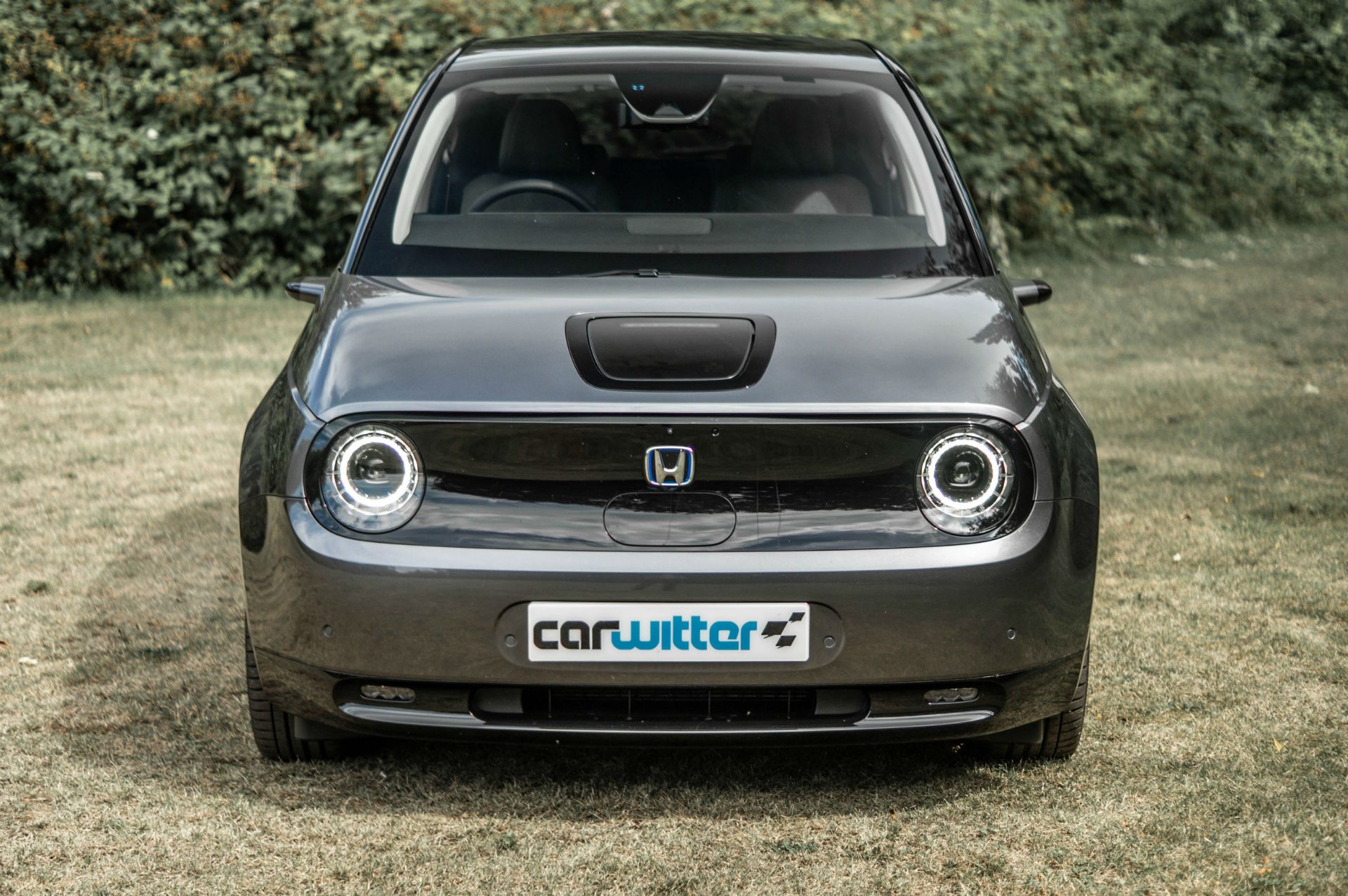 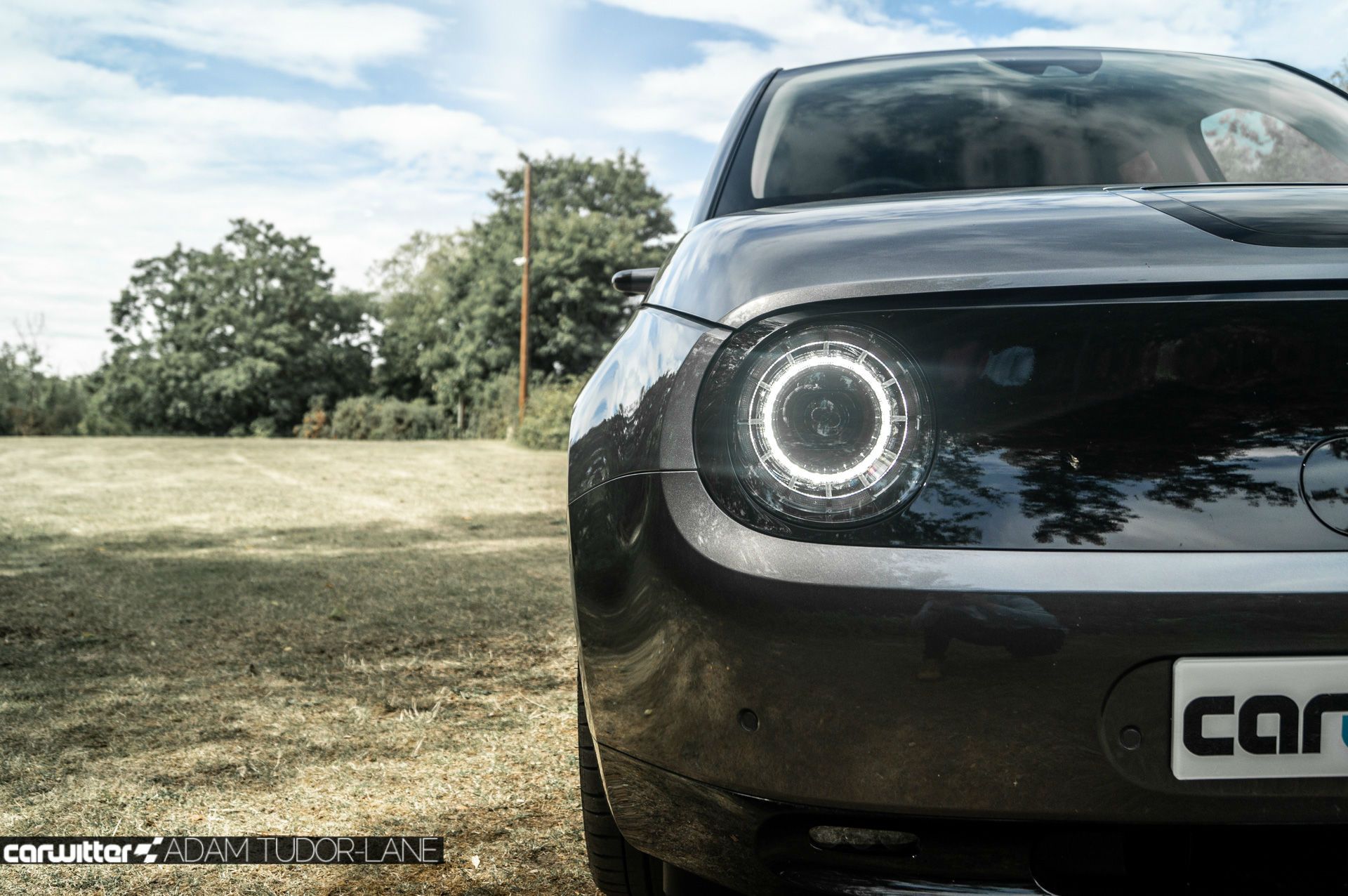 Pace is ample in the ‘Advance’ model; you can zip away from lights with impressive speed – as you’d expect from an EV. While the instant torque means dipping in and out of gaps in traffic is a breeze, with its acceleration certainly surprising a few out on the road.

There are two driving modes, normal and ‘Sport Mode’, this quickens the reaction of the accelerator pedal and lets the motor give maximum torque sooner.

Twisting through some back-country B roads and you notice how well the Honda handles, that low centre of mass thanks to the batteries being in the floor improving handling no end.

Suspension is somewhat stiff, it feels firmer than a Renault Zoe, but I’d prefer that to something uber wallowy – many EV’s have to deal with stiffer springs and dampers to control their added weight. 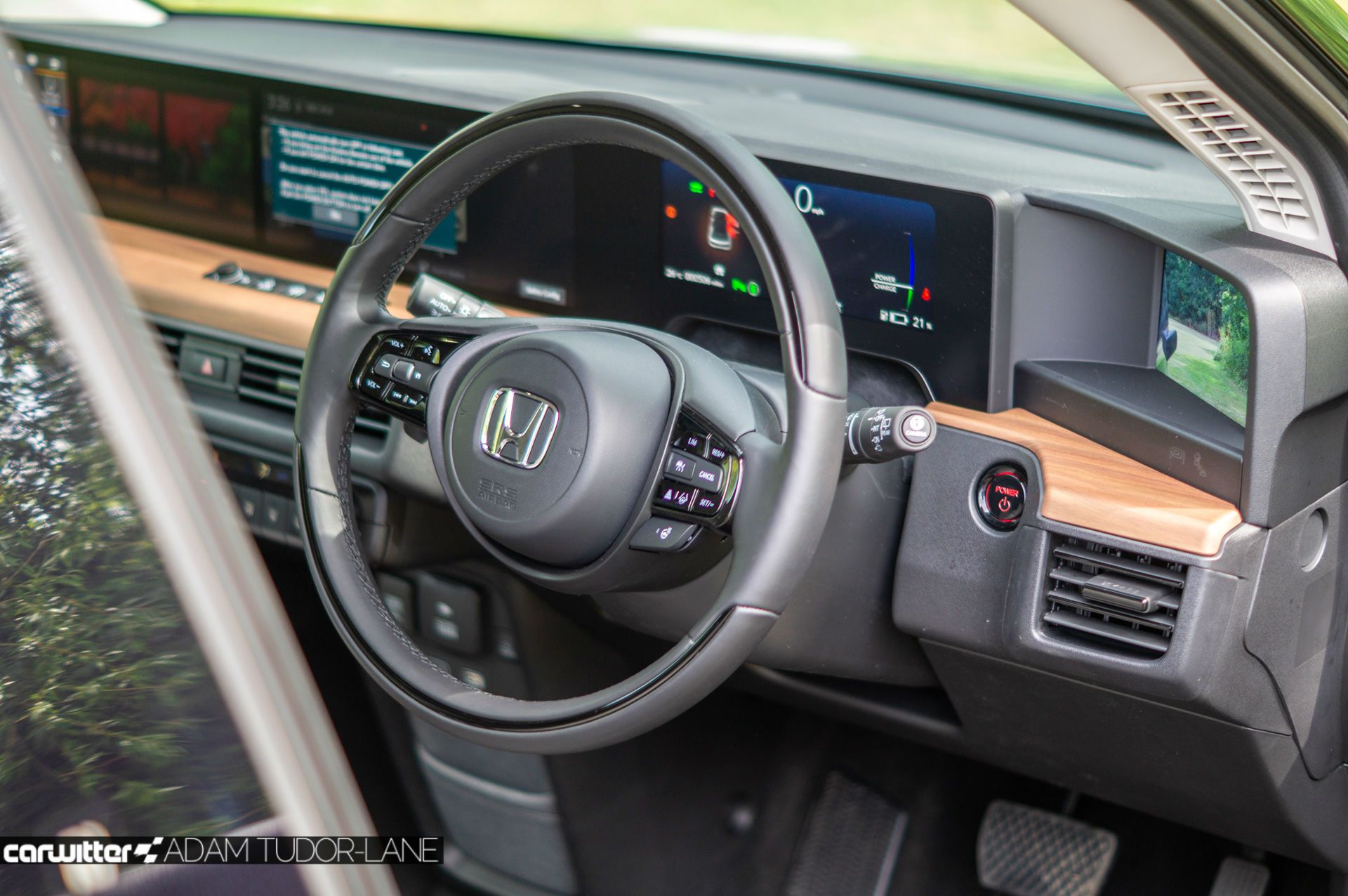 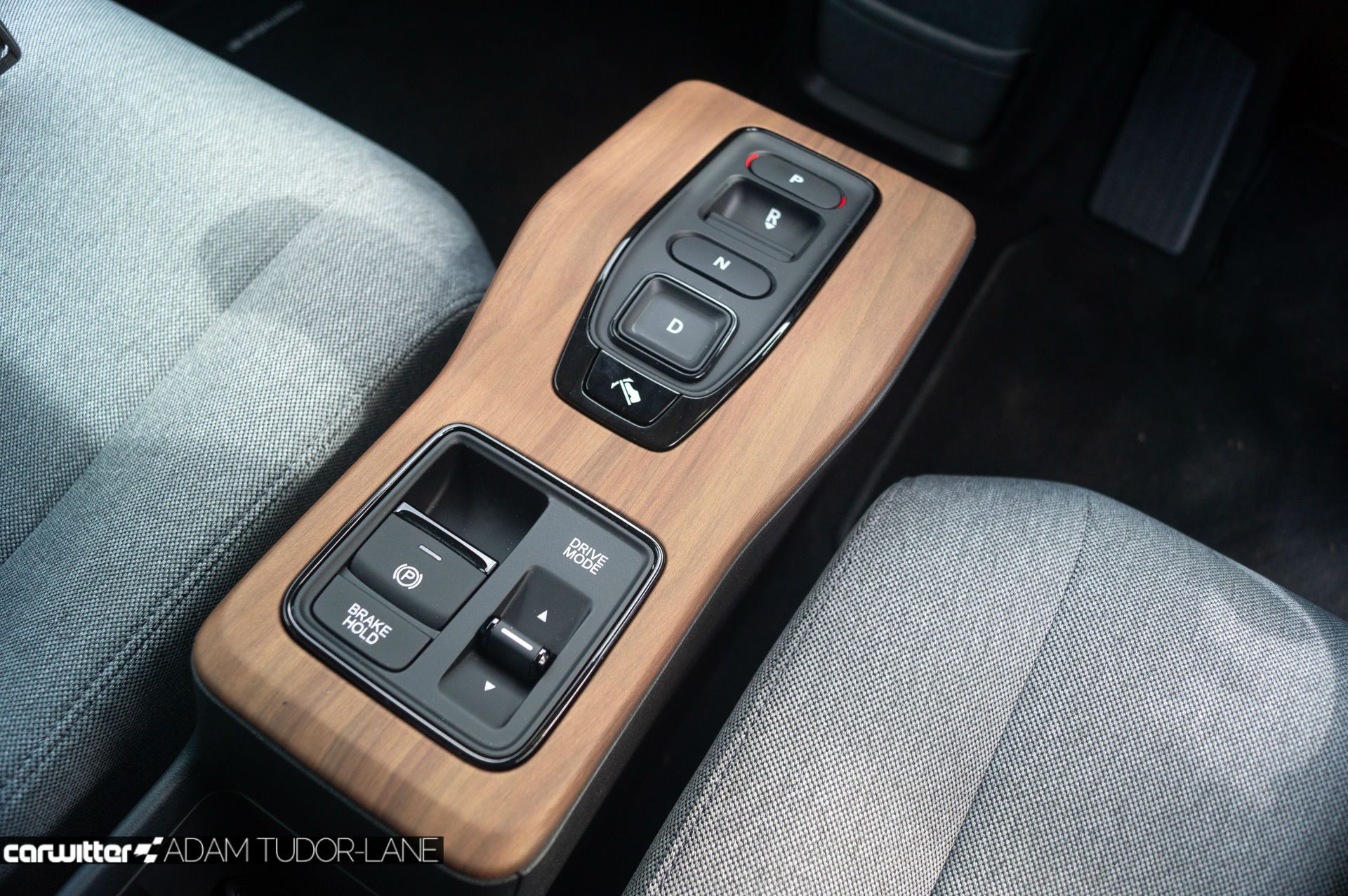 Saying that it does ride well, only seeming to wriggle a little at higher speeds on certain surfaces. Body roll is minimal, and as long as you keep an eye on the weight when barrelling into corners, you can have a lot of fun in this electric car. Oh, and the weight distribution is a sweet 50:50, yup Honda has really thought about this from a driving POV.

You can also press a button to drive with just one pedal. This heightens the electrical anchors on the regenerative braking so that as soon as you lift off the throttle, you start slowing at quite an incredible rate. Great for around town in traffic, but feels a little off when out on the open road. 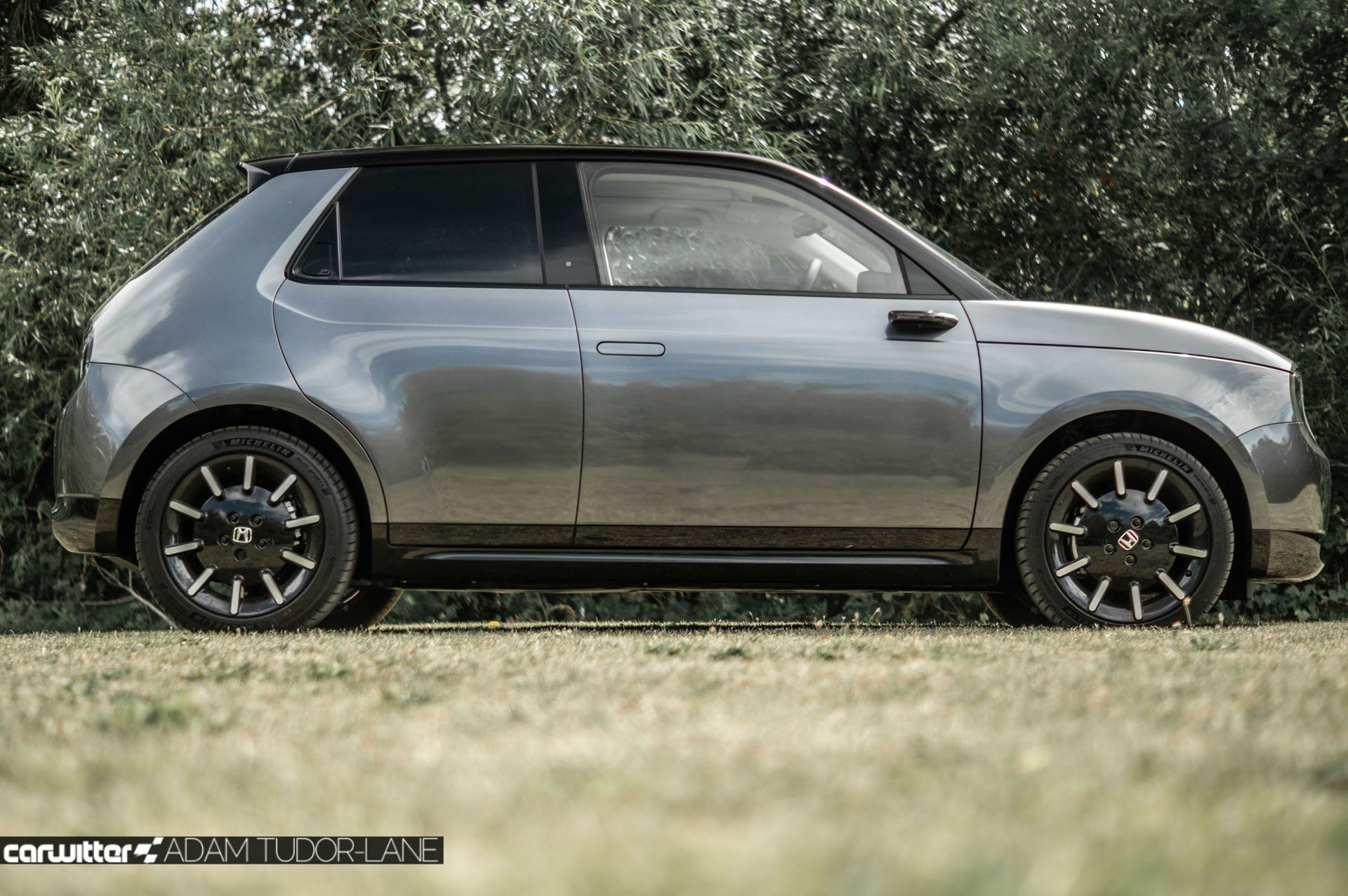 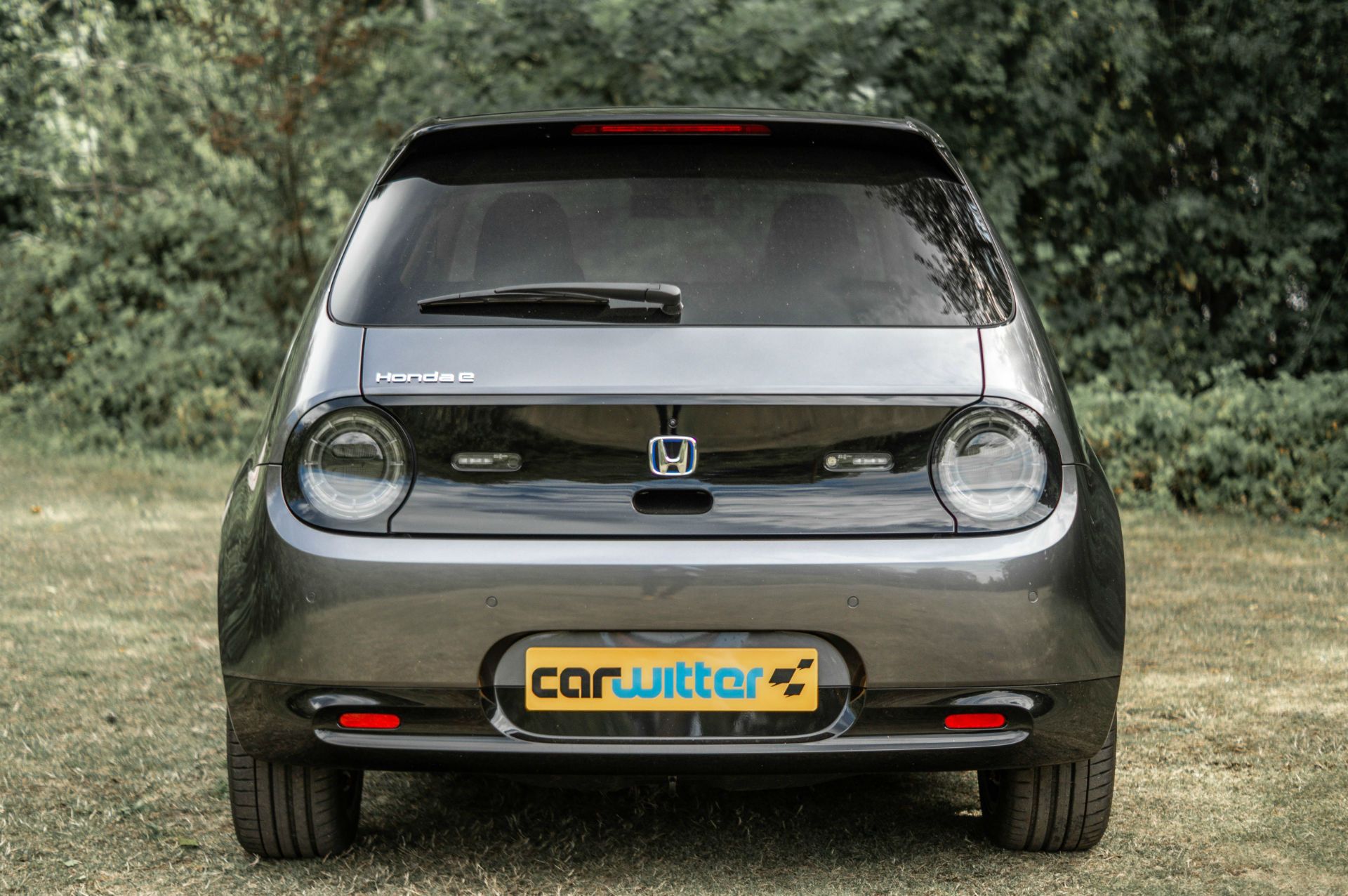 Opening the frameless door, you’re greeted by what I can only say is – the future. A bank of screens run nearly the entire width of the dashboard, each corner provides yet another display and these are your side mirrors, gone are the old-fashioned reflective pieces of glass we’re used to on cars of this size.

It all feels incredibly premium, even the faux wood is nice and svelte, while the upper buttons on the dash and volume dial are all touchy-feely in just the right way.

The only other buttons you’ll find are just below the air vents and control the heating and air-con systems. Their position along with the temp and fan speed controls make it look like an old-fashioned car stereo, slung under the dash form the ‘70’s. Love it. 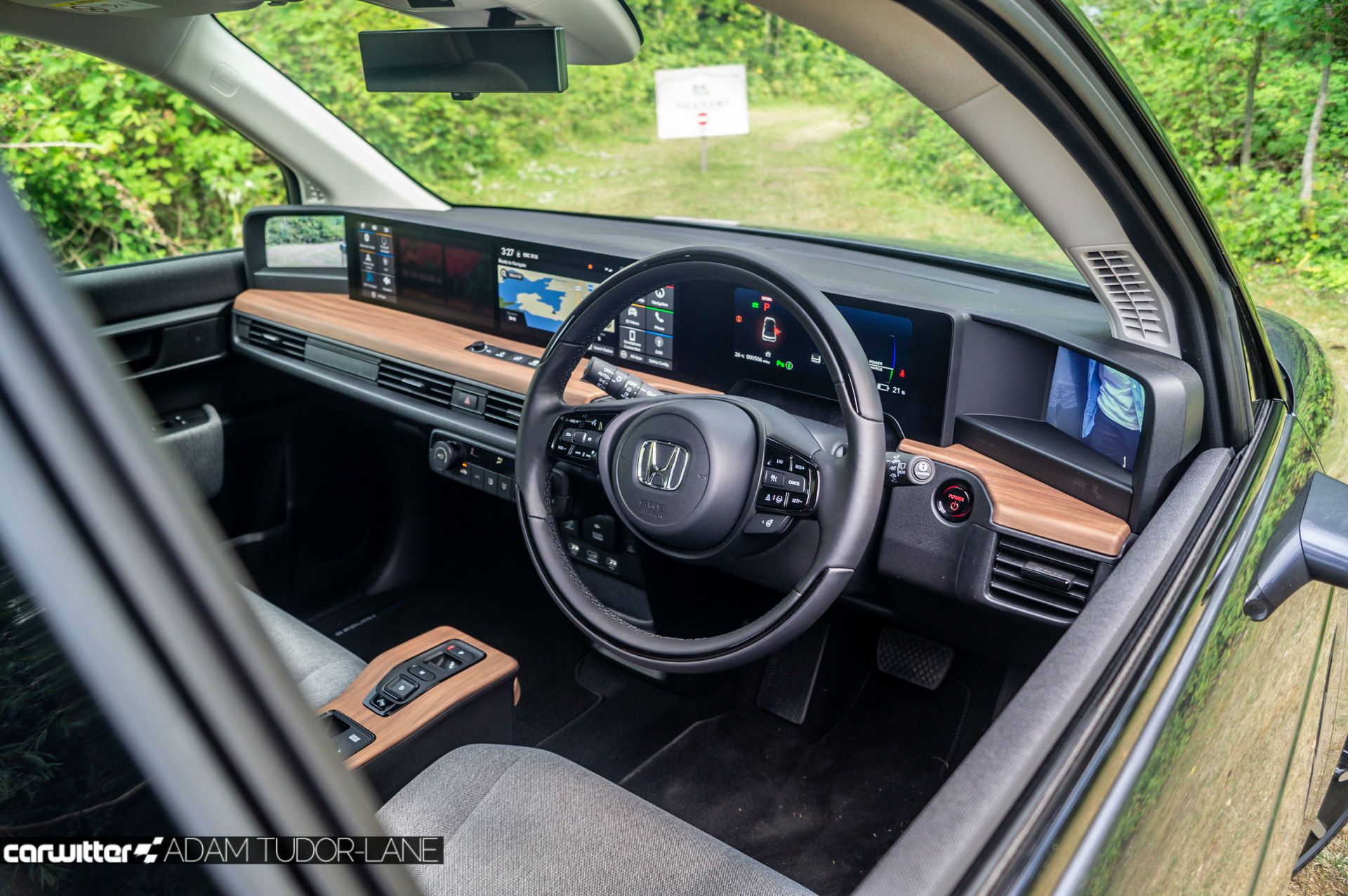 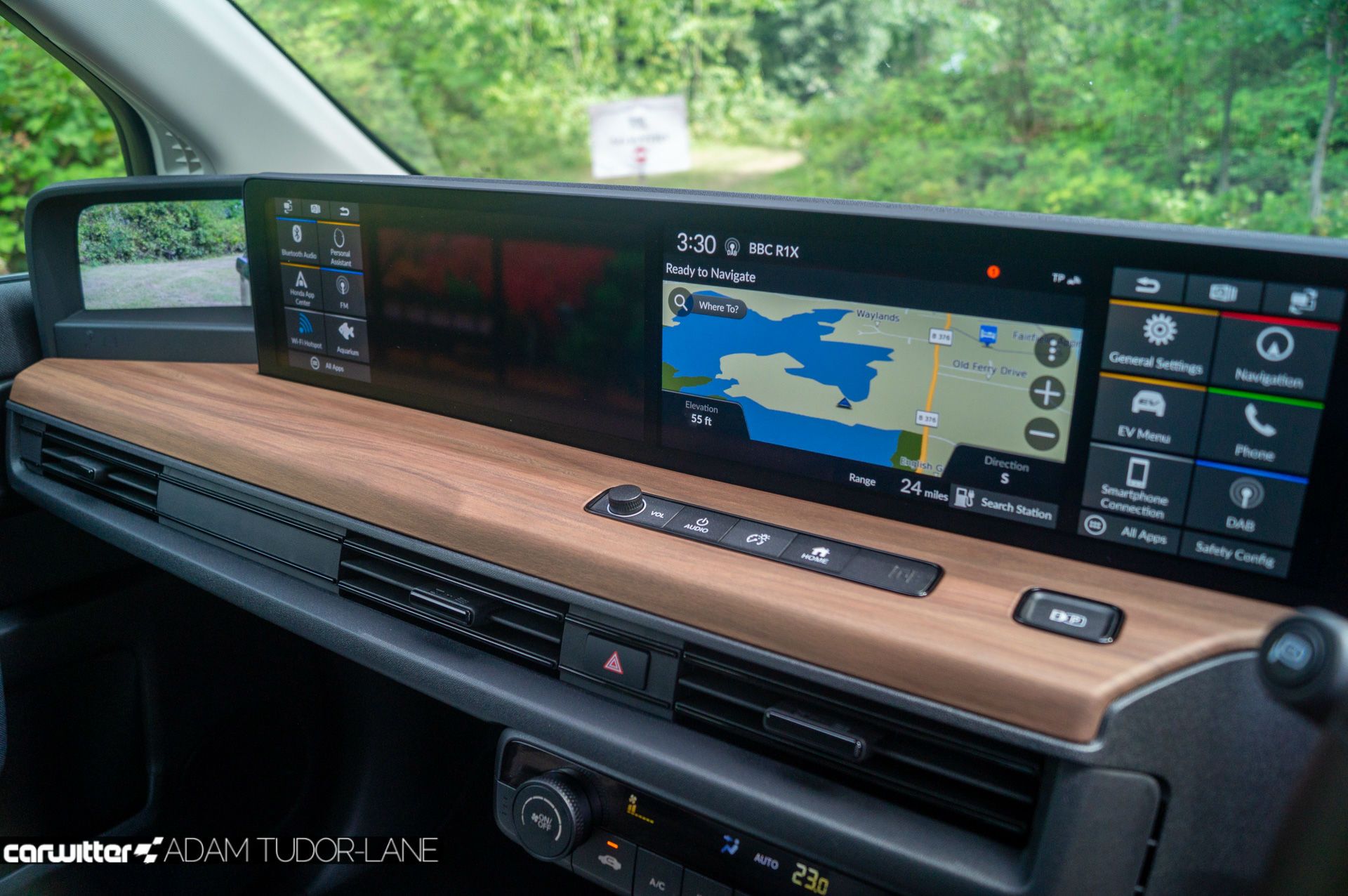 Don’t be put off by the massive screens though, the shortcuts along the side make it easy to find things you want. They can all be set up and customised to your choosing, and one of the coolest buttons switches the left screen with the right one, incredibly handy if you have a co-pilot on your journeys; they can beaver away setting up the nav then with a swift button press switch it to be right in your gaze.

You can also switch off the secondary monitor, for the majority of the time during my drive in the e I did just that. 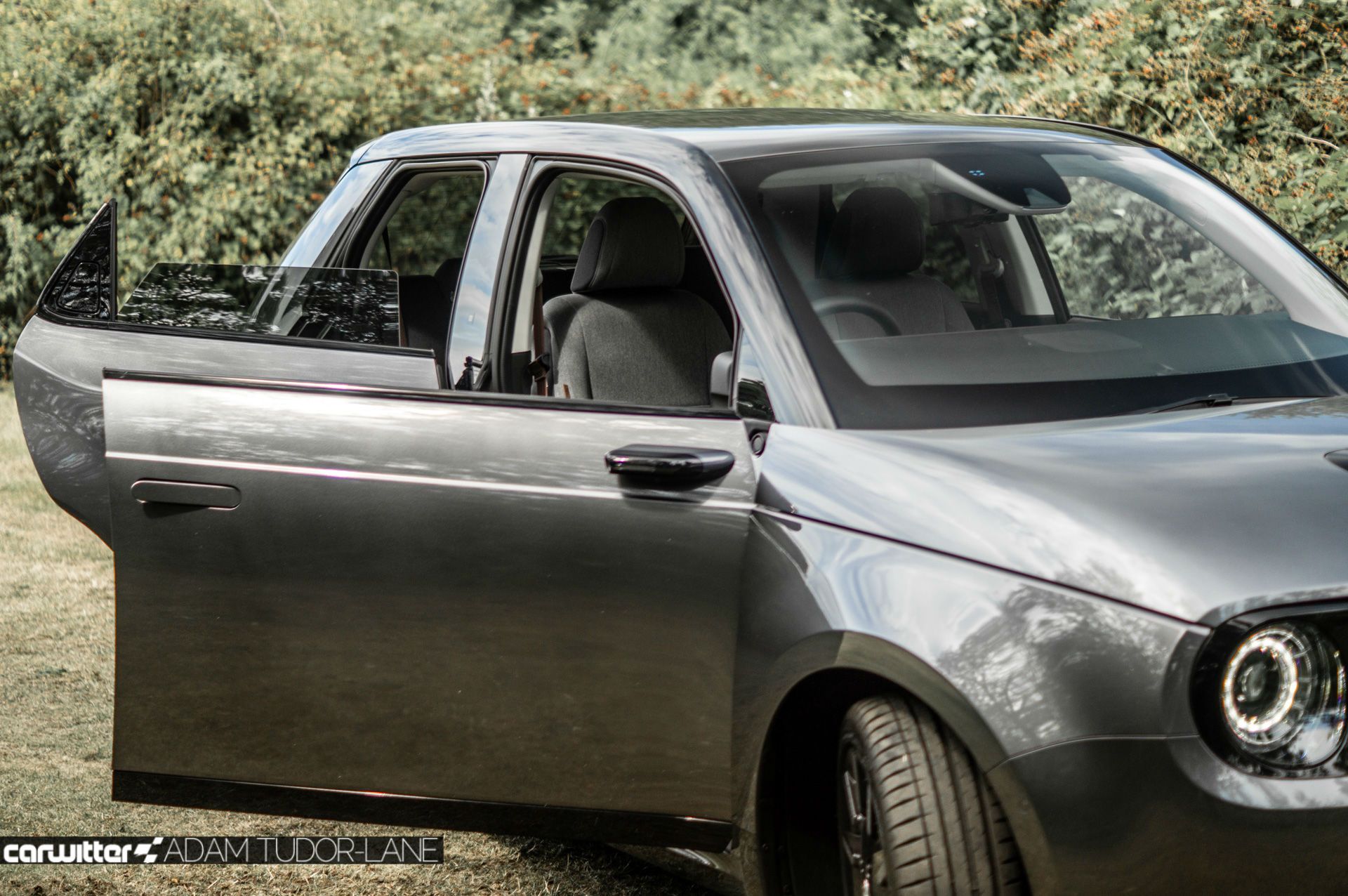 Seats are squishy and incredibly comfy, they aren’t particularly holding, but you do feel as though you sit in them, rather than on them. For an hour or so we had our presentation from within the car, and you’d be hard-pressed to moan about the comfort, even the space inside is incredibly good for its size. 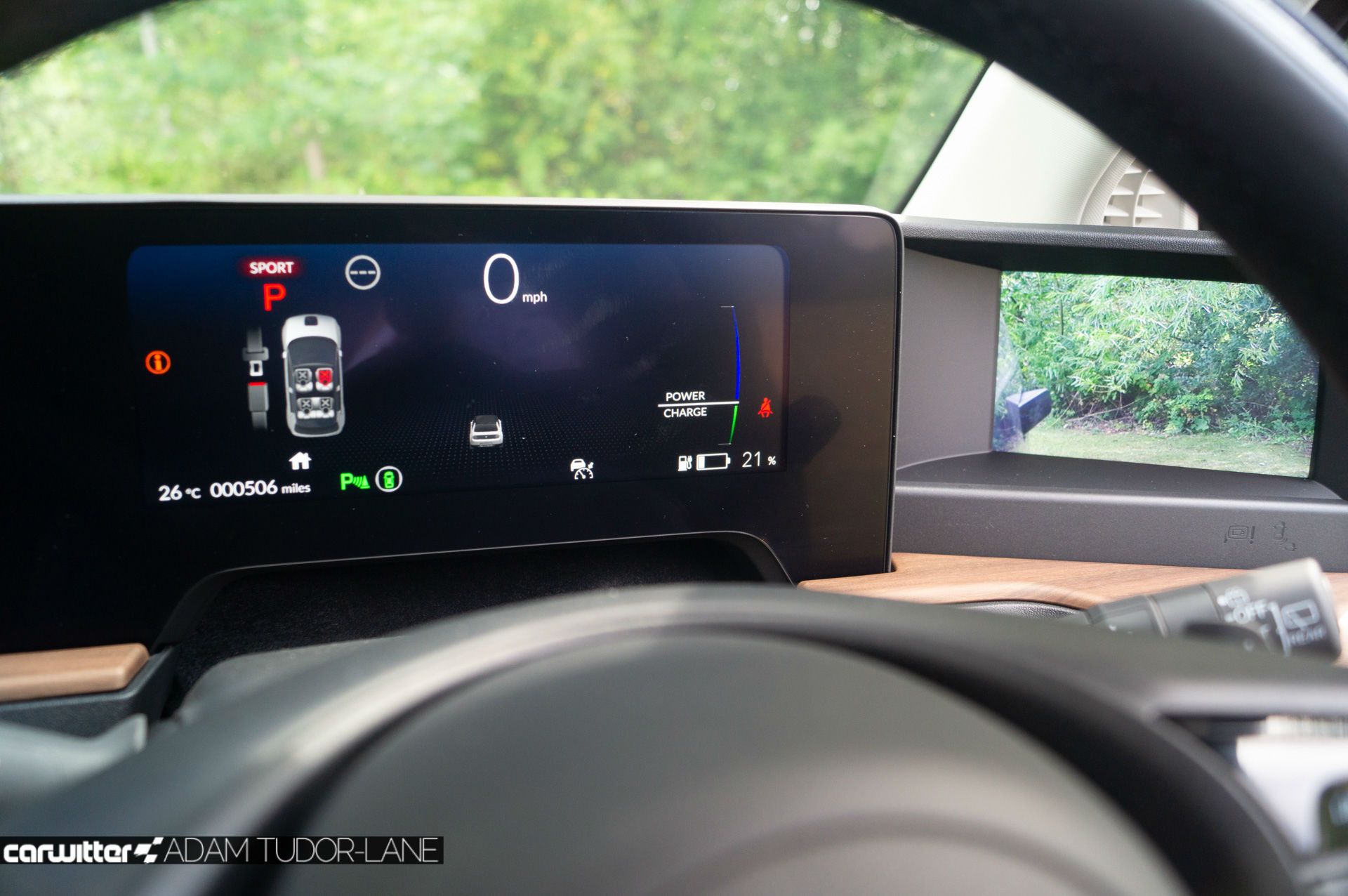 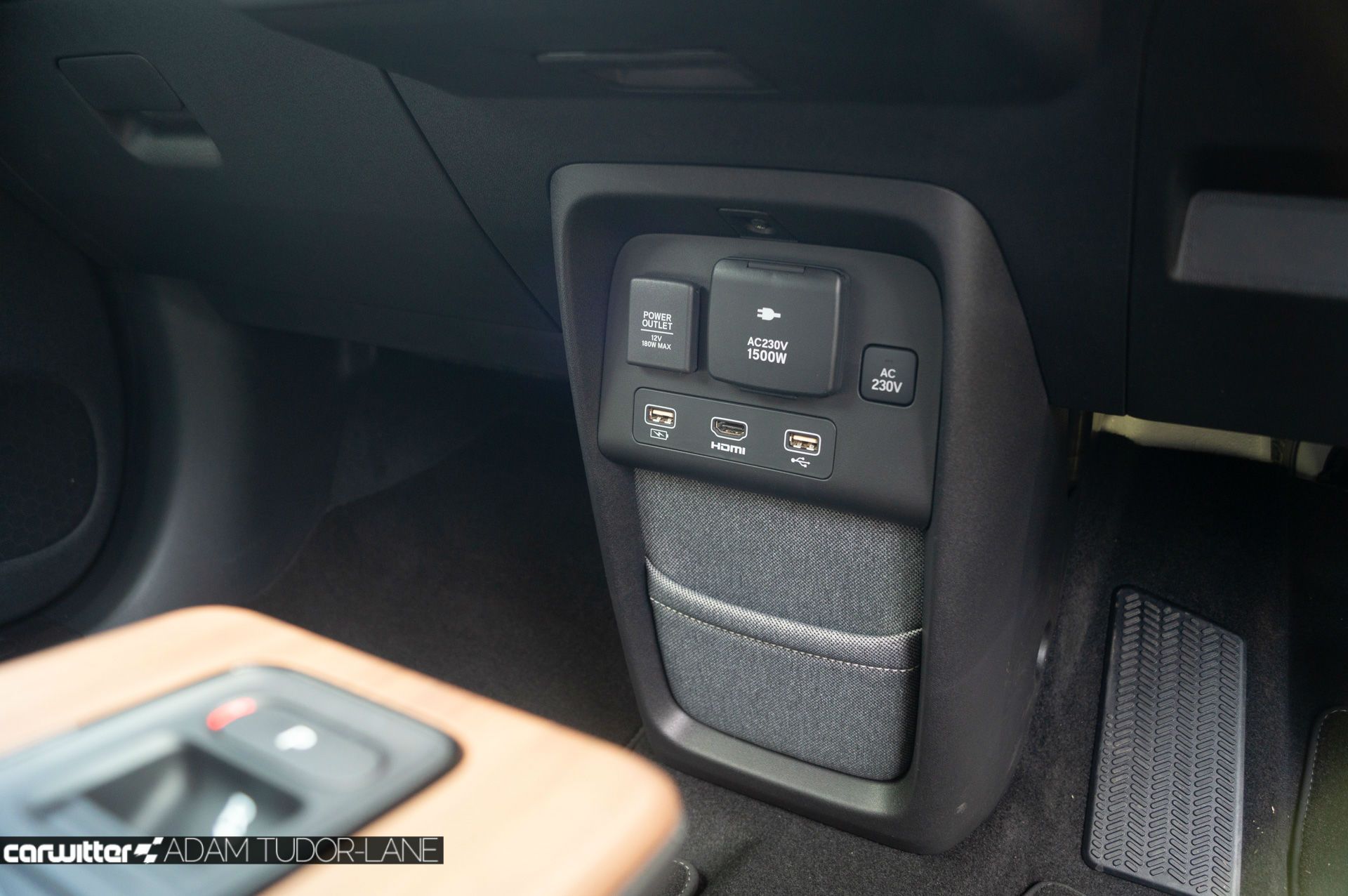 The only lacking omission is an armrest. You see the Honda e is the type of car you drive chilled out; never really in a rush, you just make your way serenely from A to B, a wide central armrest feels lacking for both parties and would make the e feel like piloting a silent armchair. 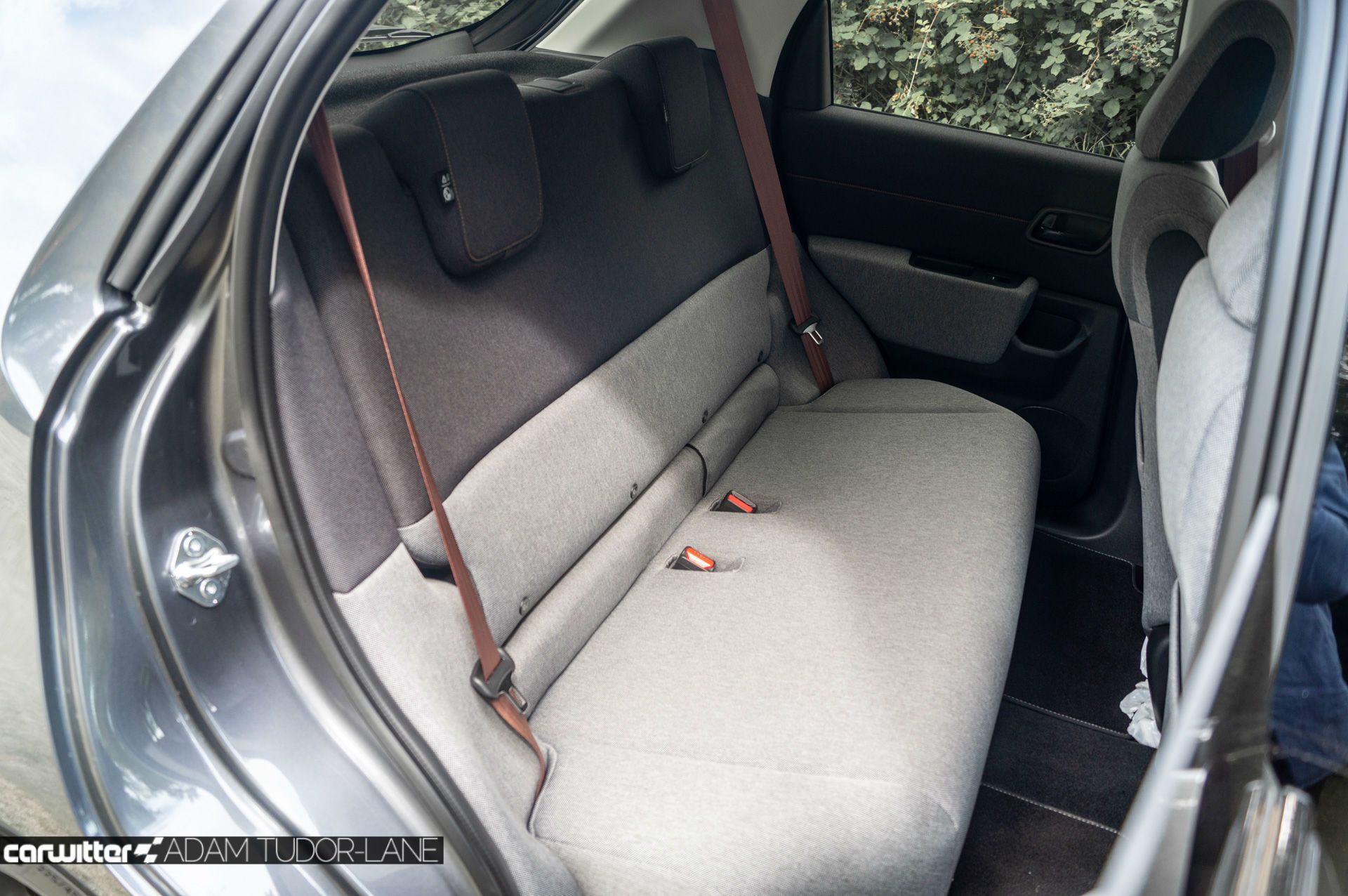 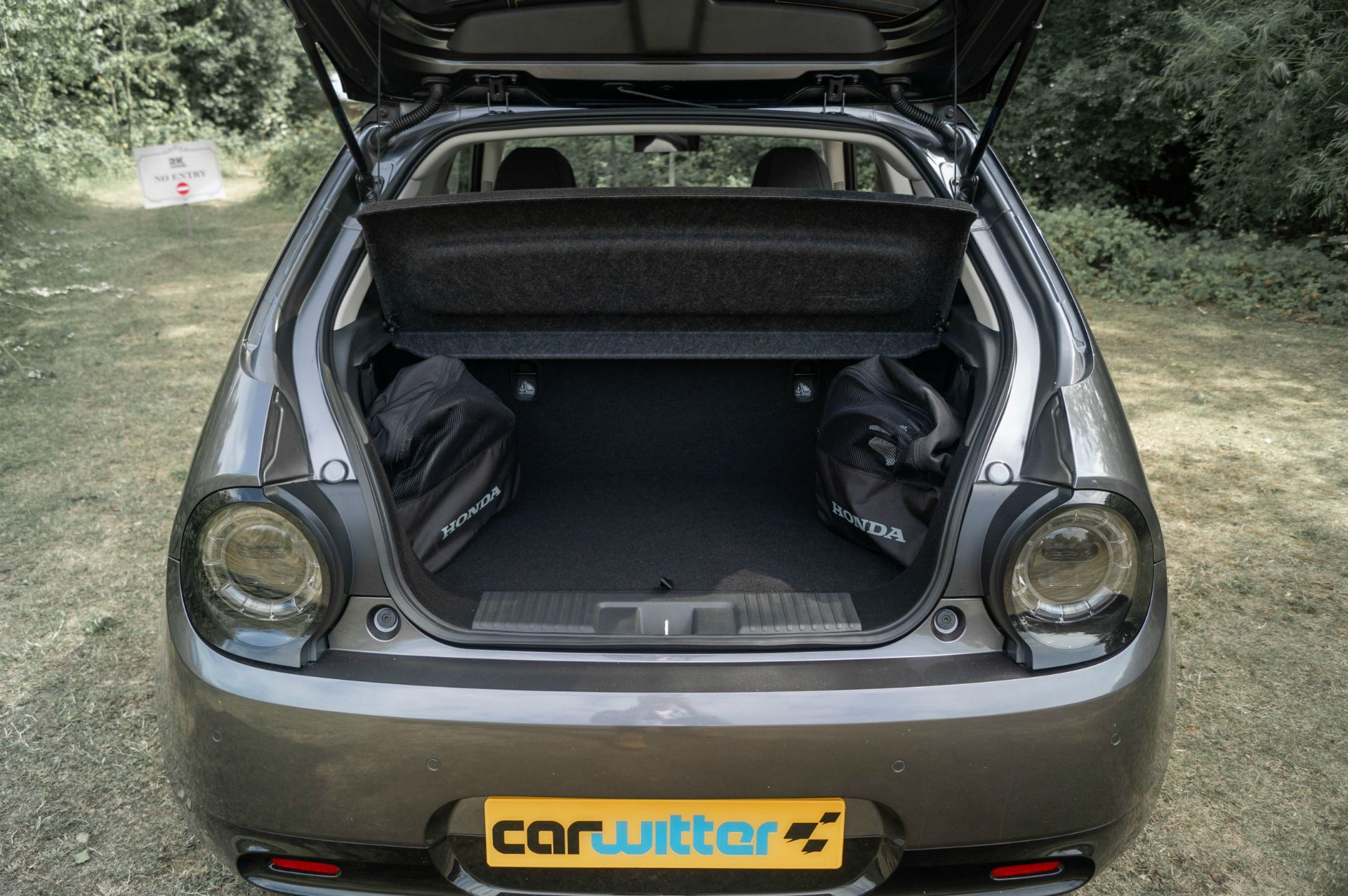 Rear seat legroom is pinched, an average-sized human will have their legs against the back of the seat, so best suited to occasional use or children only.

Boot space is equally dinky at 171 litres but plentiful for shopping and a few overnight bags.

If you want to start protecting interior and exterior of Honda e why not think about purchasing a set of car or seat covers.

Now this is one of the biggest things ‘people’ have moaned about when it comes to the Honda e, but it needs to be put into perspective – a perspective that Honda have got wrong in the latter stages, but it makes sense initially.

From the outset, the little ‘e’ was designed, as its concept title denoted, an ‘Urban EV’. It’s meant as an around-town car, short journeys, your commute of a few miles each day. It’s for people who don’t travel hundreds of miles in one stint, or potentially it’s a second car for families. It is not about the huge range and never has been. 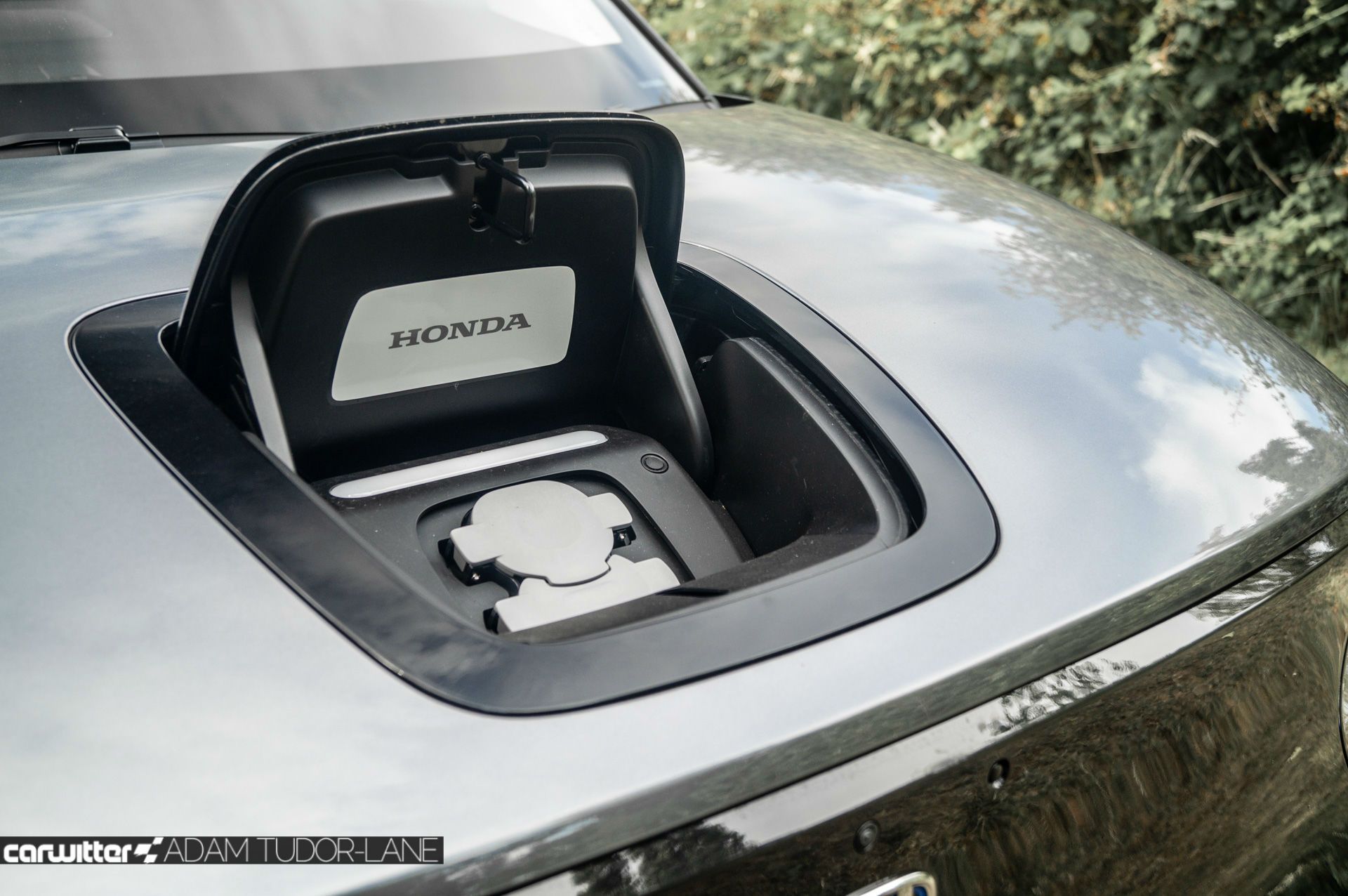 Therefore, the real-world figure for this car is around 120 miles. Honda claims 136, so it’s not wildly off. I had a few hours with the Honda and managed to rack up 80 miles from a 98% charge; the display was still showing 39 miles left, which I felt was entirely accurate given the amount I’d used over the day.

Yup, I can live with that, I get the concept and am okay with the range. What I’m not fine about is the price that Honda then want to charge given that range. This ‘Advance’ model I was piloting costs a whopping £29,160, and that’s AFTER the £3k plug-in car grant.

A Renault Zoe may not be as retro-chic, but for the same money as the entry-level Honda e, you’ll bag yourself roughly 50 more miles range, and when all people are looking at are paper numbers when it comes to EV’s that counts for a lot. 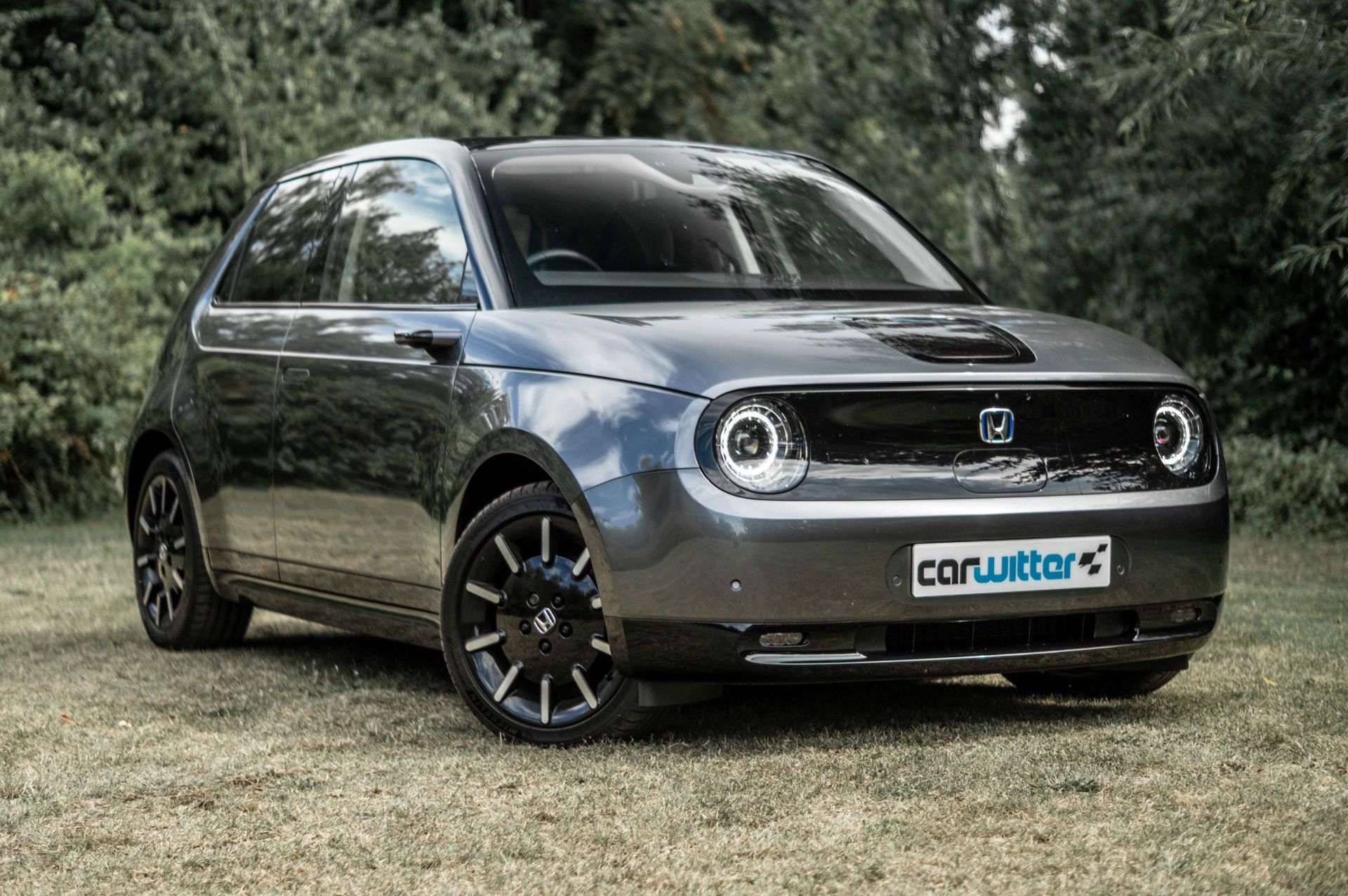 Would I have one? Yes. In a heartbeat. I feel it’s a car you could easily own for eight years or more with ease; it would still look modern both inside and out, there would be no need to change car for me.

But the price is just too damn high. The EV marketplace needs a Honda e costing from £19,999, flood the market, take the hit initially but make it the Model T of electric vehicles. You’ll earn that money back in the ultra-long term when you sell tens of thousands of the things.

I really, really want the ‘e’ to sell well, but the numbers seem stacked against it. We’ll have to see how many fall head over heels for those cutesy looks. 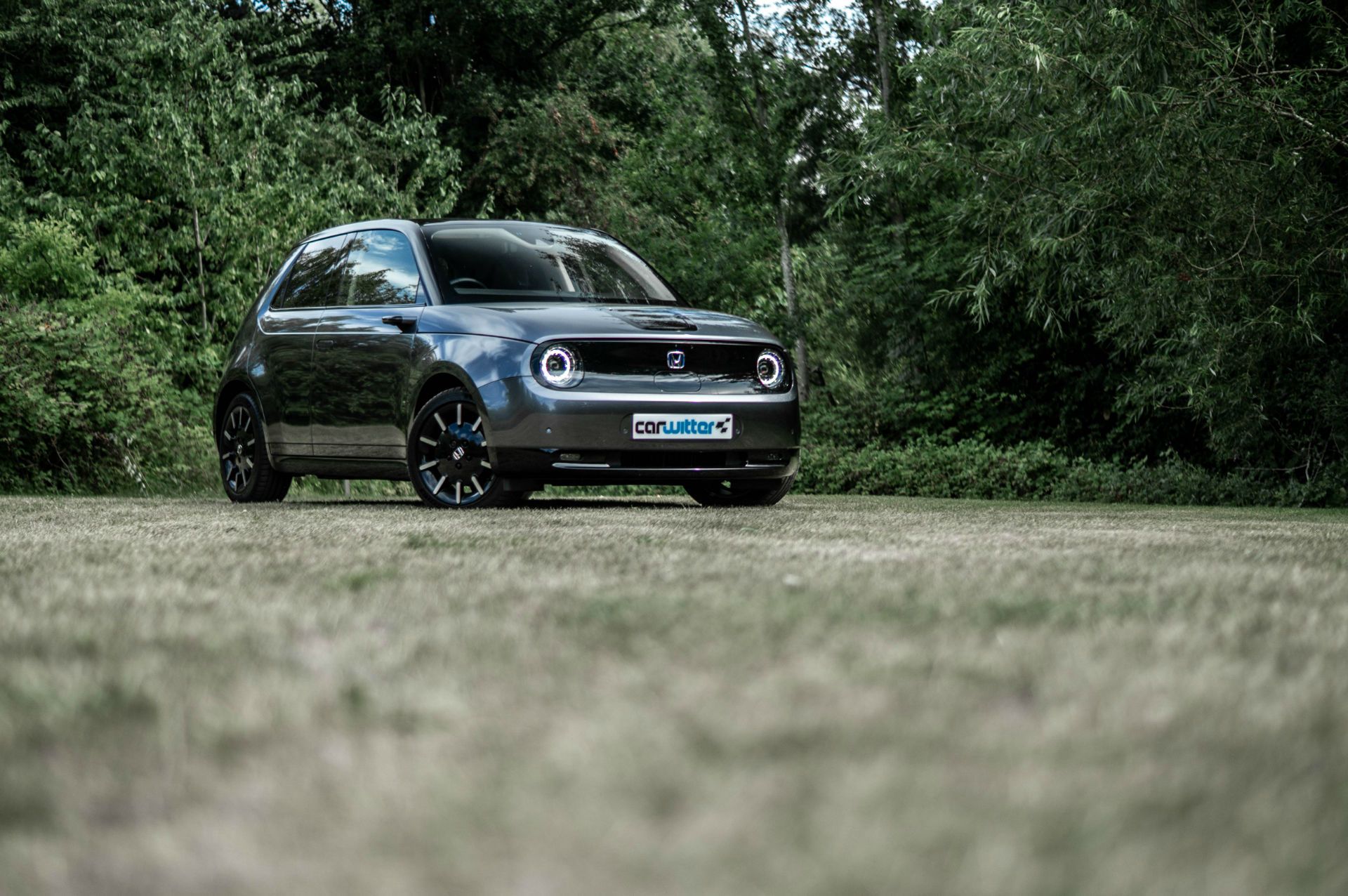