Garmin have released what is probably the largest ever sat-nav for normal road users yet, the Camper 1090.

While many companies make larger units for truckers and lorry drivers, we’ve never come across a 10” sat-nav for average road use.

Yes, it’s aimed at those with camper vans or who tow trailers, but you can also use it as a normal, every day sat nav. 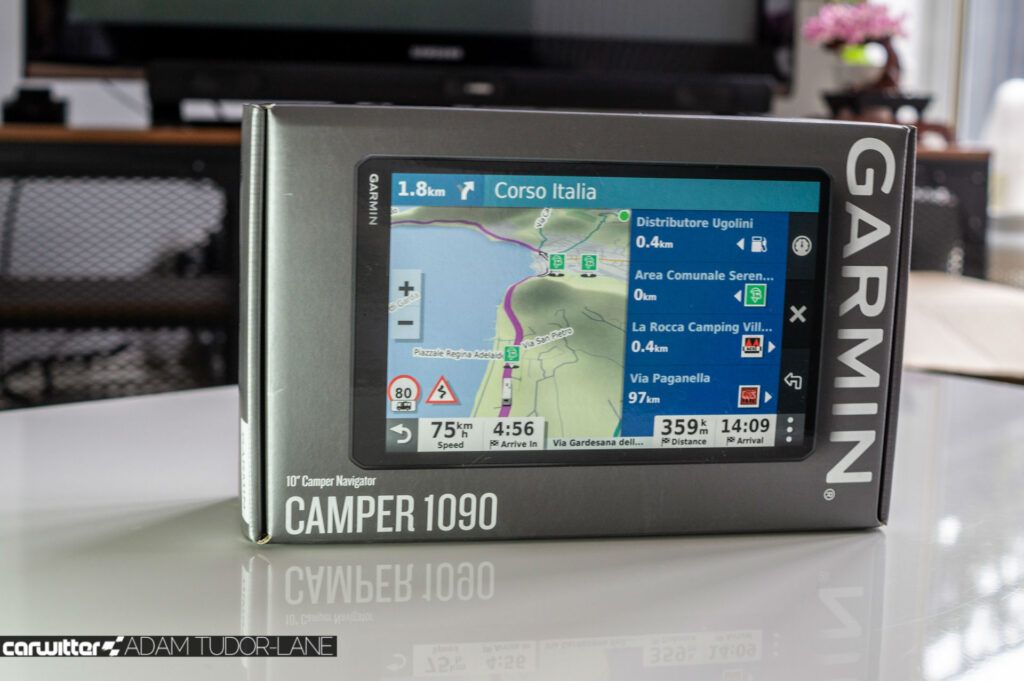 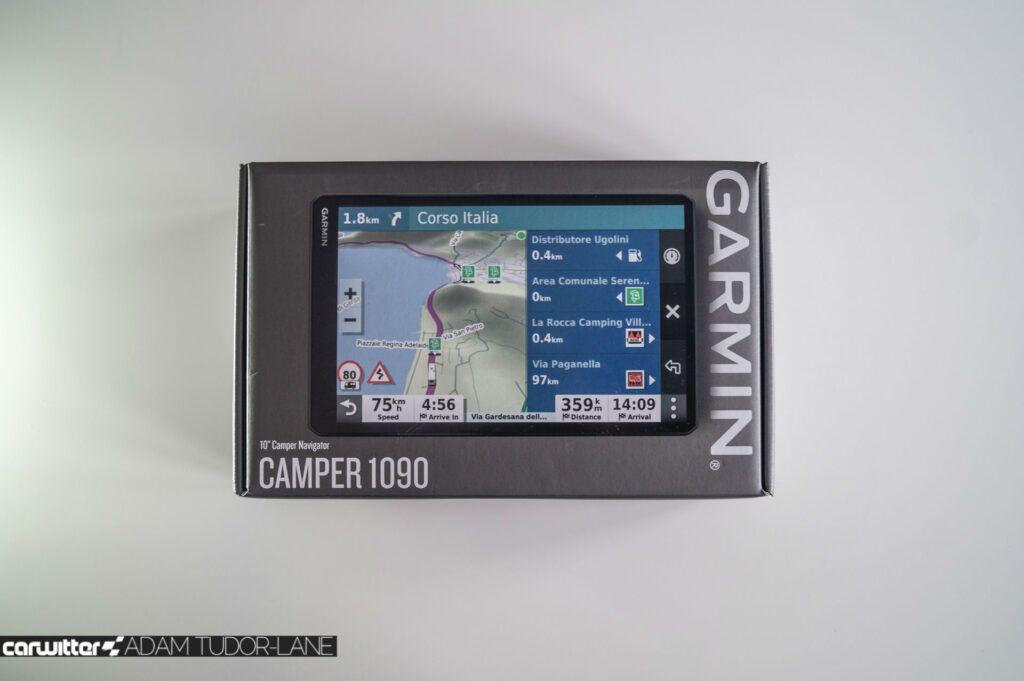 In essence, it’s an Android tablet that runs a bespoke Garmin interface.

It’s an idea I’ve had for the last year or so, taking a decent-sized tablet and turning it into a sat nav/media device for car use. Garmin have just done it the proper way by creating a bespoke unit for the job. 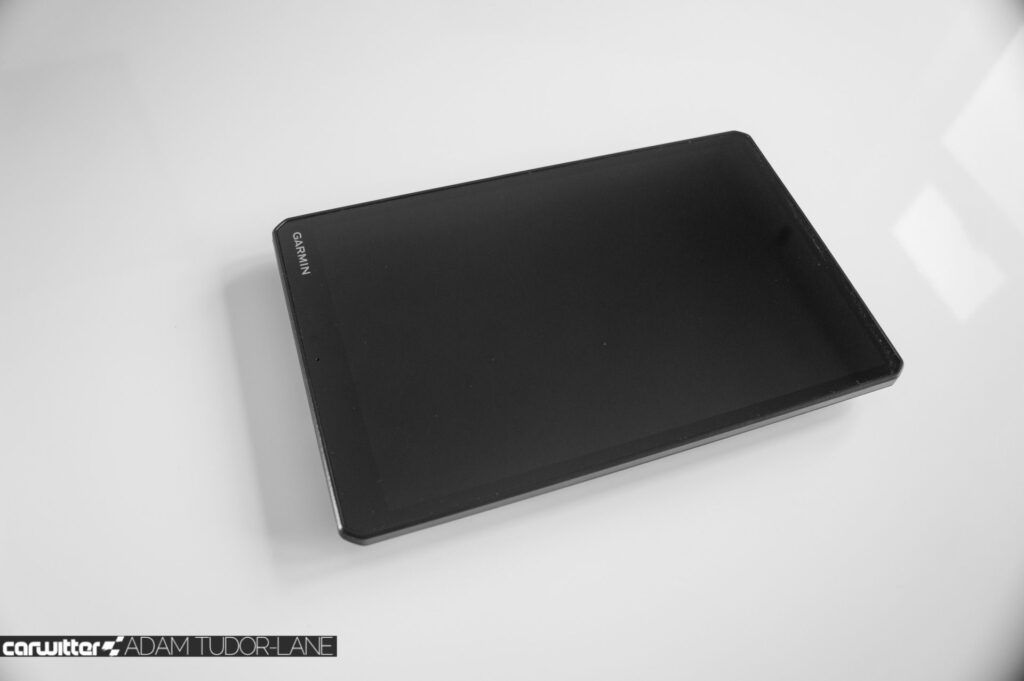 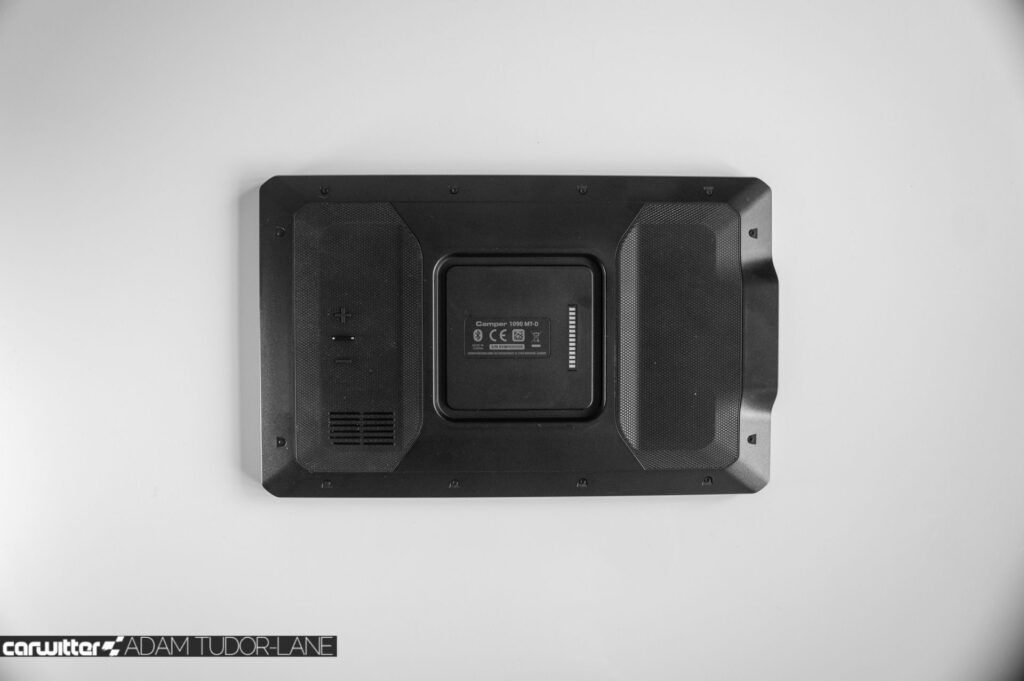 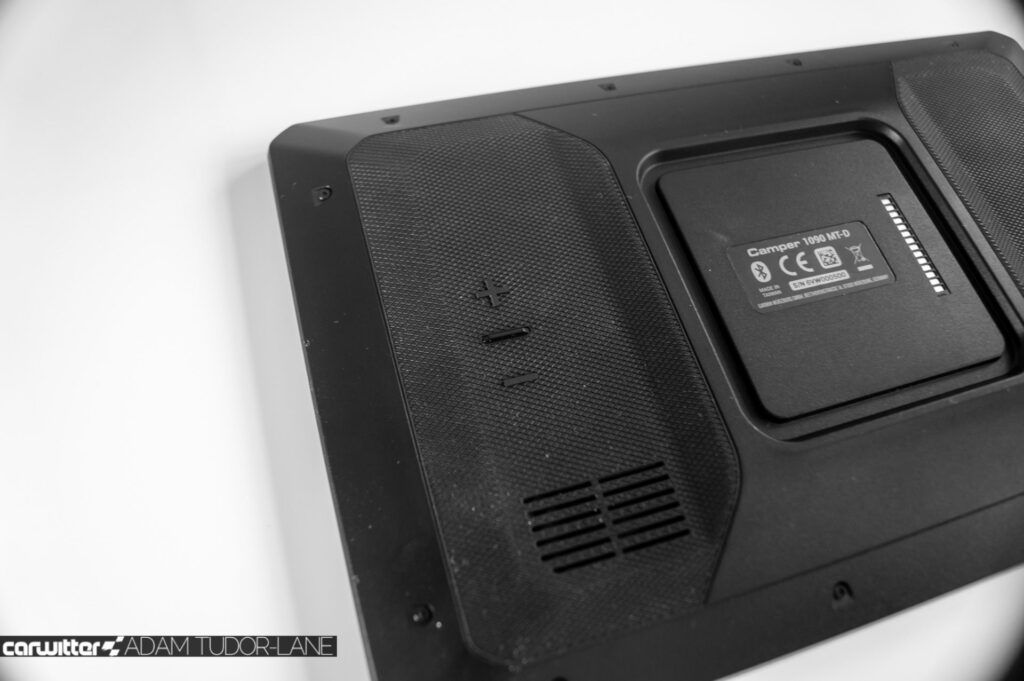 While there are no specs on the box and few available on the Garmin website, by sideloading the Inware app, we can see that it runs a quad-core 1.4GHZ CPU (likely a Snapdragon 425) with 2GB of RAM.

There’s also 32GB of built-in storage (not the 16GB Garmin lists). The battery is rated at 2 hours, and it looks like it’s 1,000 mAh, according to Inware.

Compared to most run of the mill tablets, the specs aren’t huge. But Garmin would have hand-picked the best hardware for the job. You don’t need 1920 x 1080 resolution for sat-nav directions, nor do you need a rapid processor. 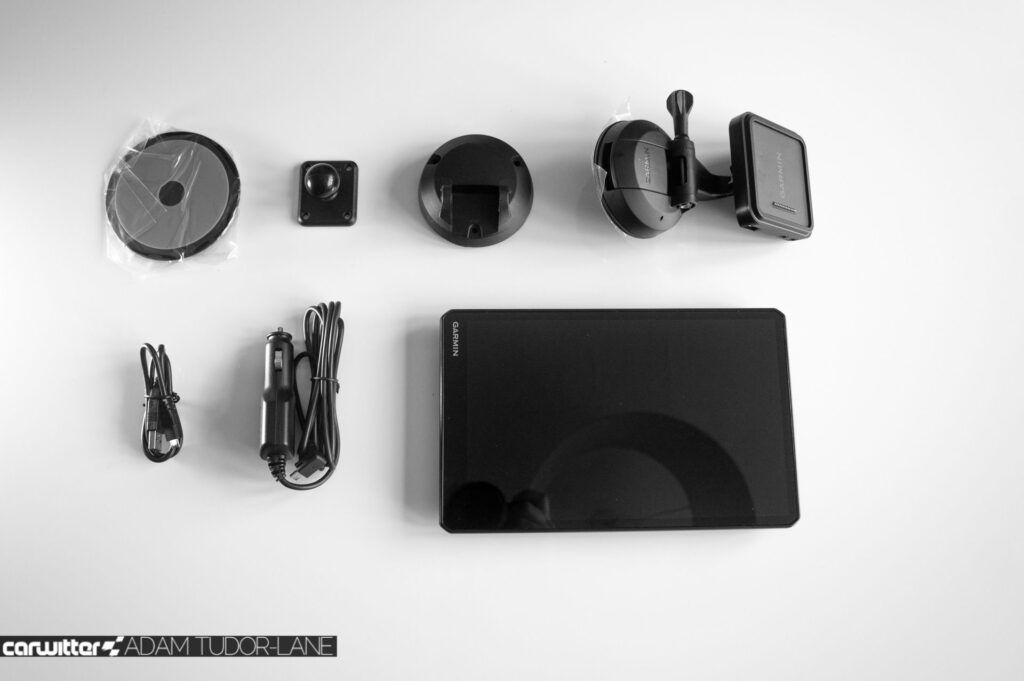 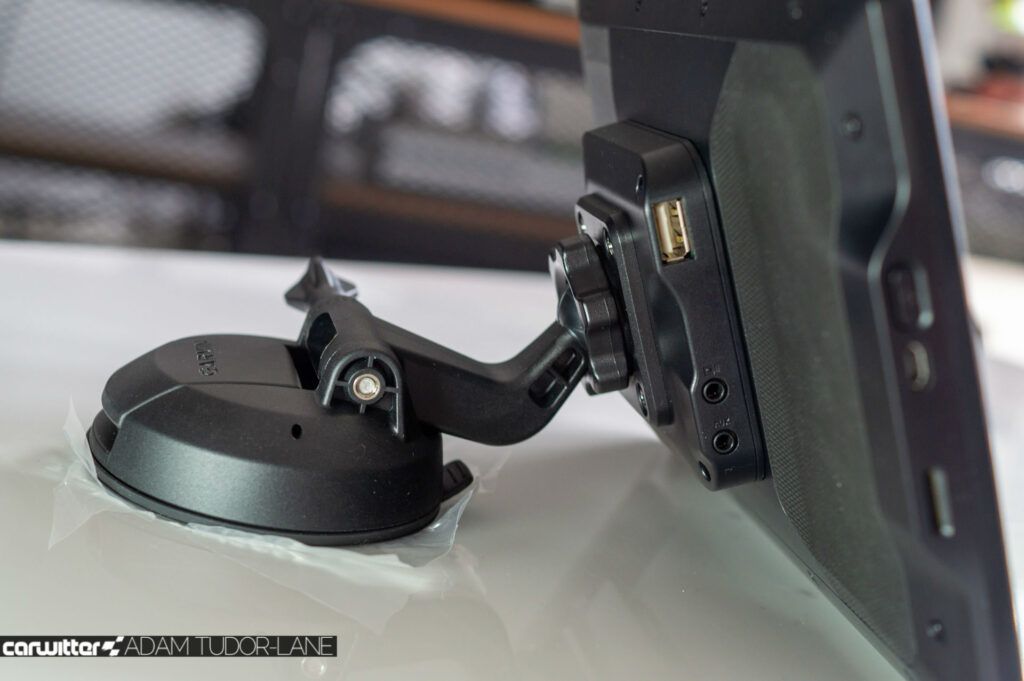 As soon as the Garmin 1090 see’s power, it fires into life; you don’t have to touch a thing. The supplied dash mount is a tough plastic arm with a seriously strong magnetic mount – there’s no way this thing is ever going to drop off onto the floor of your vehicle.

Booting up takes precisely 35 seconds to get to the ‘Warning’ screen, then it’s another 10/15 seconds before you’re asked to select your current vehicle. You can pick between Motorhome, Motorhome with Trailer, Car or Vehicle with Trailer. 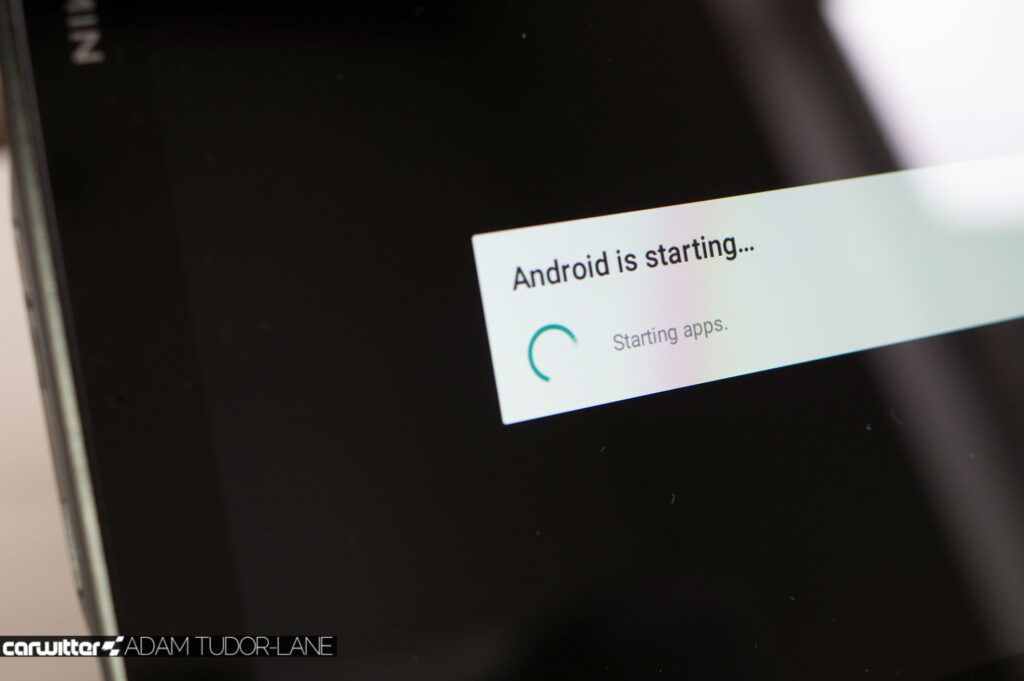 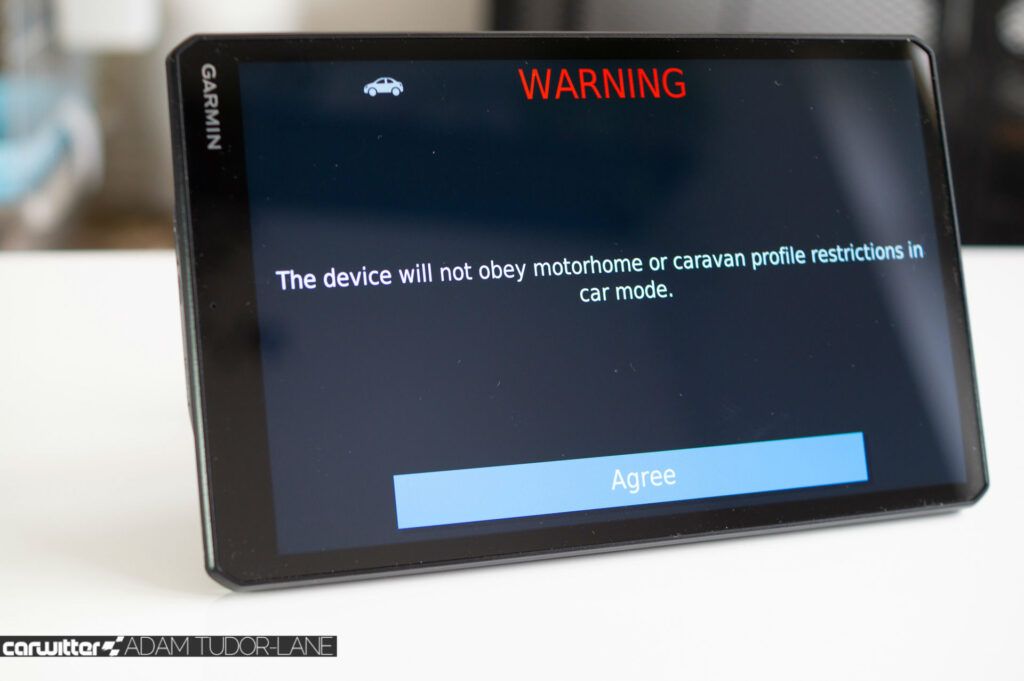 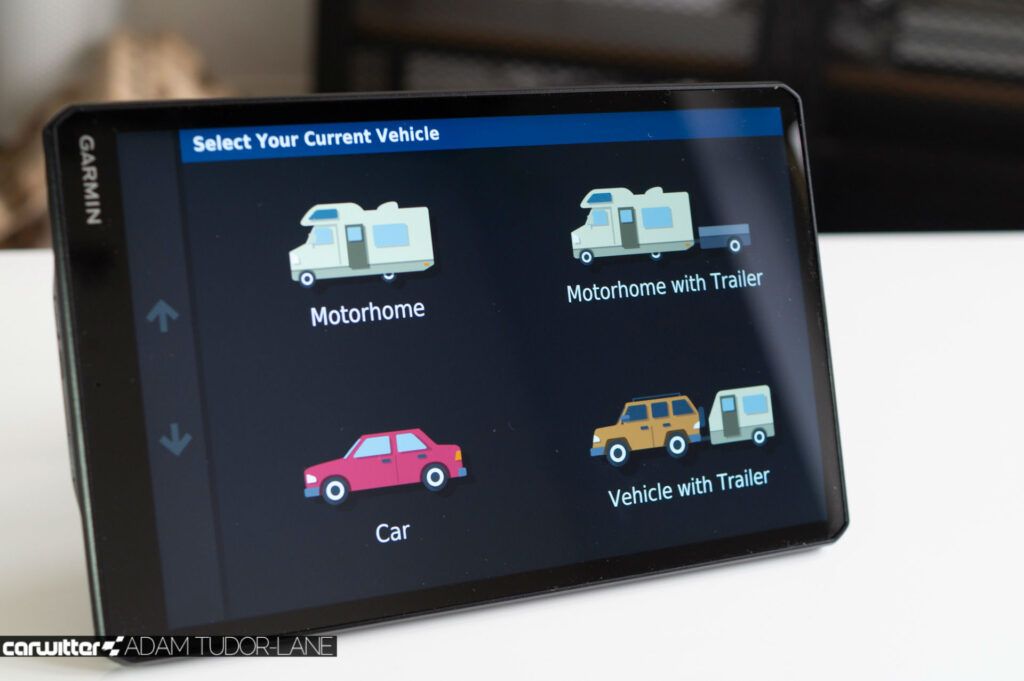 It’s a bit strange why this comes up every, single, time. If you’ve bought this to go into a motorhome, more than likely, that’s where it’s going to stay. It’s not a small device that you’re going to be swapping between vehicles – please, Garmin, allow me to set a default in the settings!

Selecting anything other than ‘Car’ will take you to a page where you can enter your vehicle height, width and length. Allowing you to switch between feet and inches while doing so.

In the vehicle with trailer’ menu, there’s the option to pick Caravan, Boat Trailer or just Trailer. Again you can enter height, width and length.

The clever Garmin will then only route you down roads that you’ll fit by entering those details. Incredibly clever, as the amount of times you see stuck motorhomes on narrow passes is quite scary. 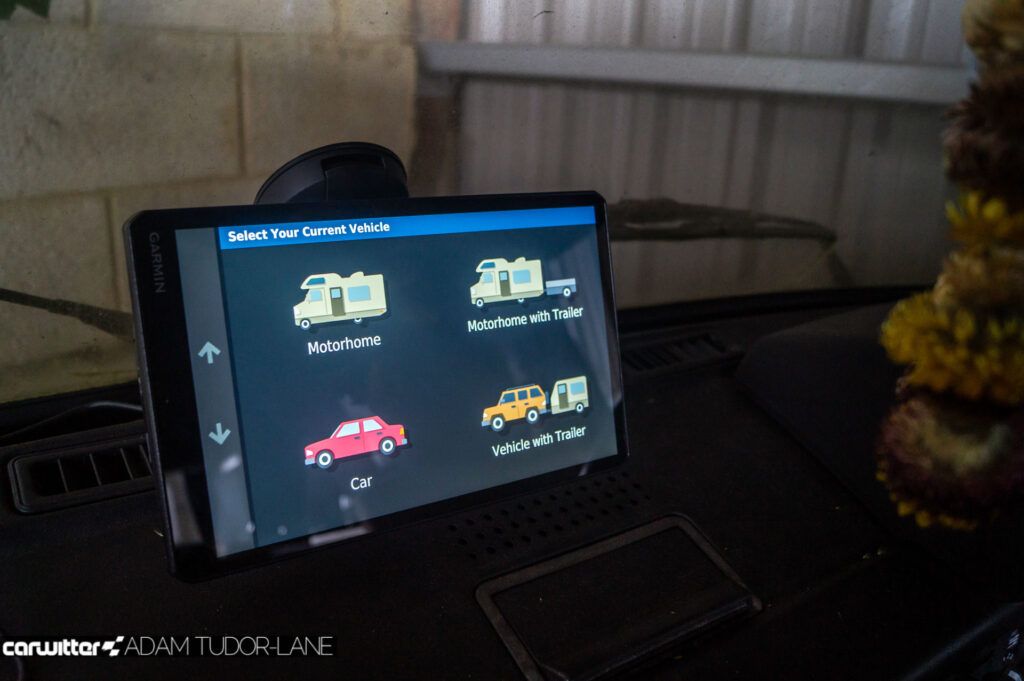 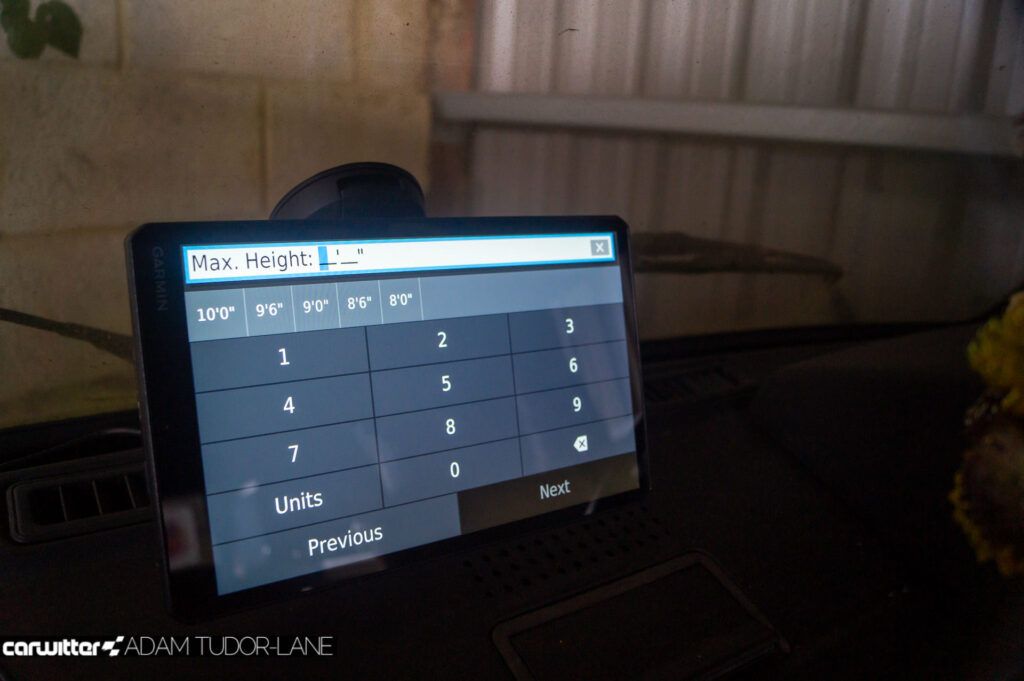 In ‘Car’ mode, the Garmin will ignore all of those restrictions and go back to being a normal sat nav.

You can also find campsites and stopover locations from directly within the navigation app, much like finding items via points of interest on a normal sat nav. You can also navigate by ACSI, Trailer’s PARK, iOverlander, Campercontact and Foursquare.

There’s also the ability to use GPS coordinates, a feature that should be standard on all sat-navs as it’s incredibly handy for plotting exact locations on road trips. 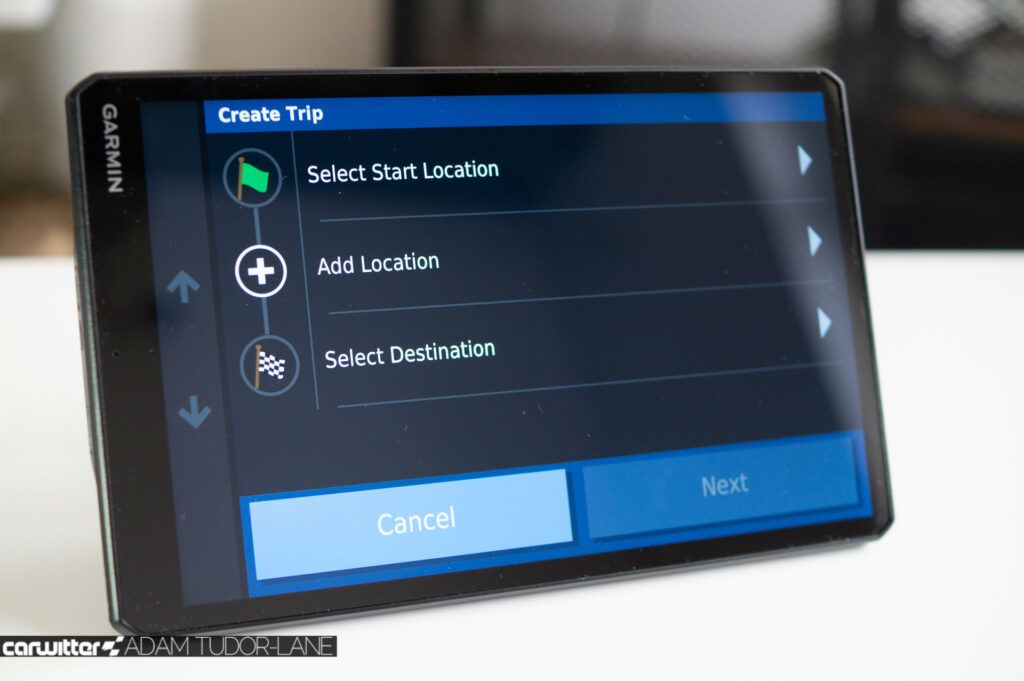 One of the other great features is the Trip Planner; much like TomTom MyDrive, it allows you to plan out a route or road trip in advance and save it. The Garmin version is all device-based, there’s no website as with TomTom, but it’s still easy to use.

Enter your starting point, add in the waypoints along the journey, and then finally the destination. In seconds it crunches all the routes and will show you on the map.

Linking it via Bluetooth with the Garmin Drive app on your smartphone enables data on the go; this will give you weather conditions and radar, live traffic and even photos from the nearest traffic cameras. It also negates the need for a full-time SIM for the Garmin. 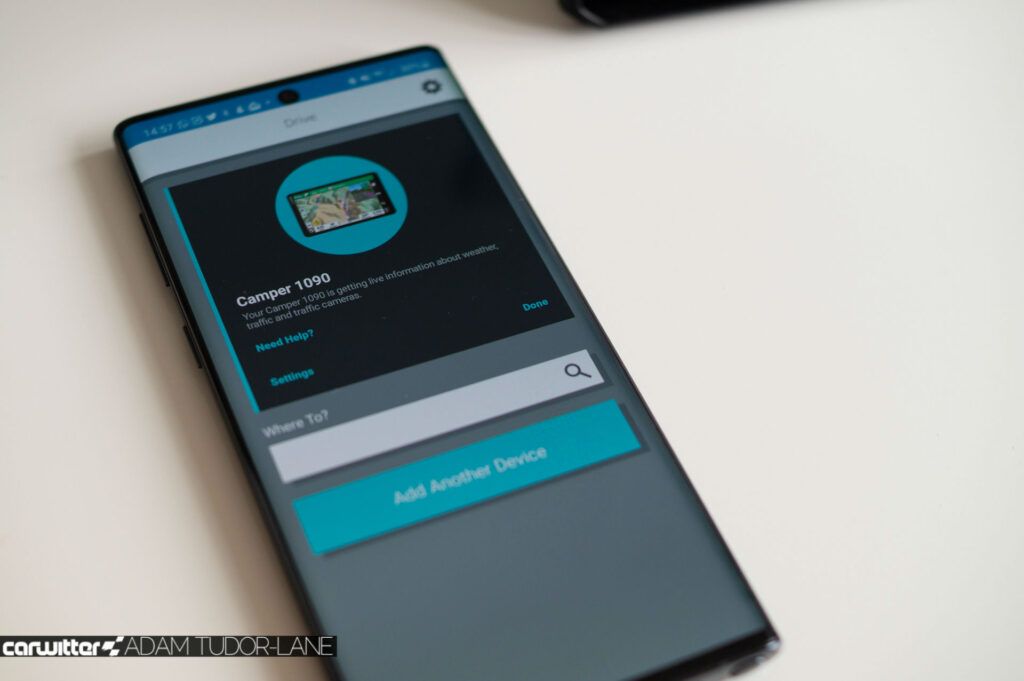 Our main reason for testing the Garmin 1090 wasn’t the fact that it was a camper van/large vehicle-friendly sat nav; it was purely for its size and whether it could be a modern addition to an older vehicle, catering for both sat-nav, media and handsfree applications.

You’ll struggle to fit the 1090 in a small hatchback with a steeply raked windscreen without giving up a lot of real estate, but in an older vehicle, like our Peugeot 106 GTi. Perfect.

With a massive 10” display, the Garmin makes navigating far easier than an eye squintingly small five or 6-inch affair. If anything, it’s less distracting when driving, as you can glance over and see everything clearly straight away. 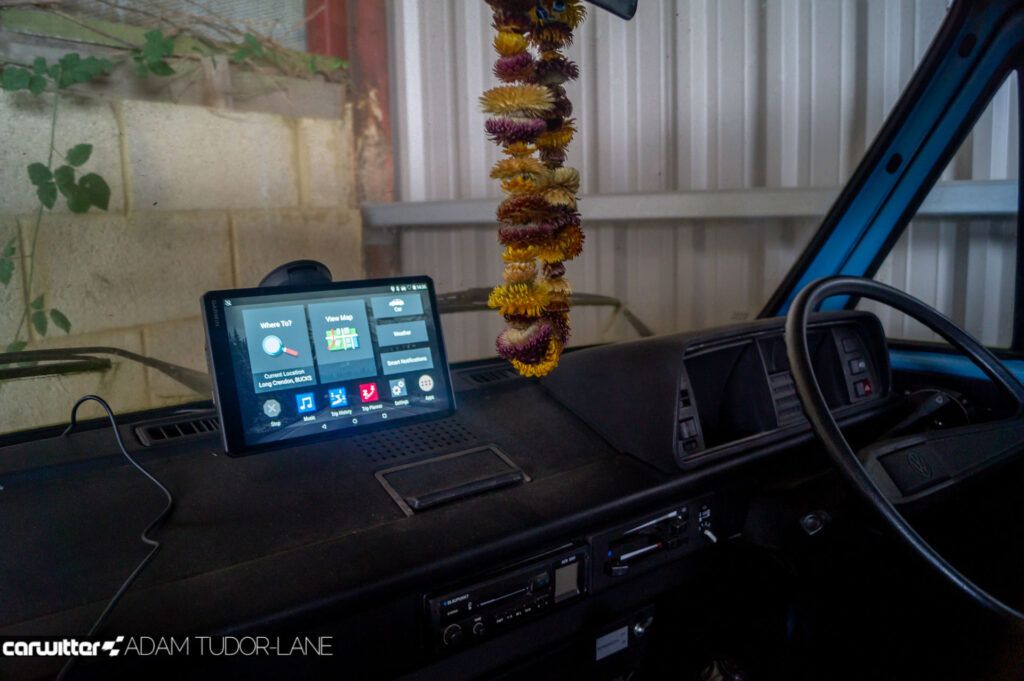 There were a few hefty updates to be had when we first powered up, so stick it on your wifi and download the 4-6GB map updates one at a time until your unit is fully updated.

The graphics may not be as flash, or slick as what TomTom offer, but the maps are easy to follow, and you can switch between different colour schemes if you wish.

One major point that Garmin haven’t pushed with the Camper 1090 is that you can use it to play music. There’s even a built-in music player as well as a gallery.

The other huge bonus is that you can expand the memory with a microSD card, so loading in 128GB with all your music on is incredibly easy (for those who don’t stream everything).

This seems a huge selling point to me, especially if you own an older camper van or car for that matter; it’s more than likely that you have to either connect your phone via Bluetooth or maybe even use an old fashioned aux cable to play your music on those weekend breaks or holidays.

The Garmin can hold all your songs and navigate for you; there’s also the bonus of the dash mount having an aux output, so you can either connect via Bluetooth to your stereo or plug in an aux cable. 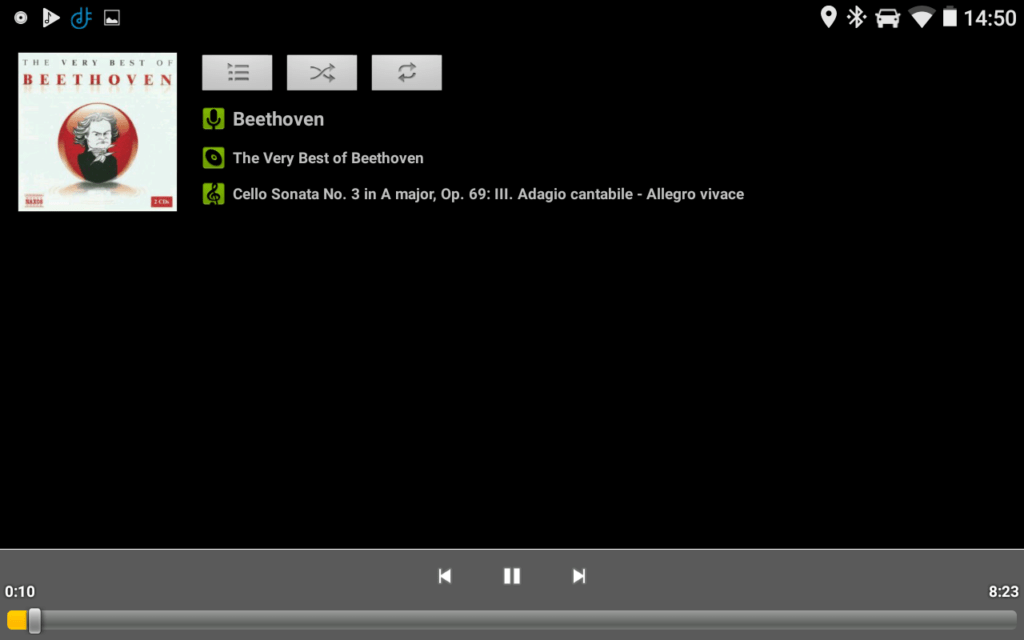 Sadly the built-in music player is simply hideous. The interface is incredibly basic and would make it hard to actually use safely on the move.

Having a play about I found a way to sideload any android app onto the Garmin; installing Musicolet gives a far nicer interface. It can also be controlled by gestures, swiping up and down to change track. Come on, Garmin, another thing to fix right here; it’s an easy win. 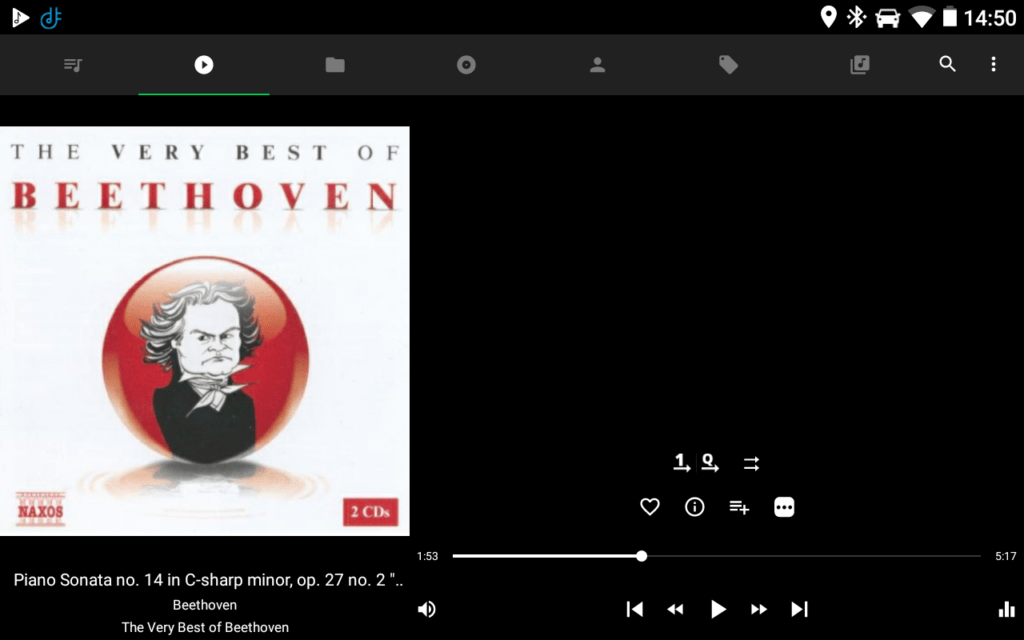 Linking the Camper 1090 to the Garmin Drive app is easy enough; you can’t do much from the app on your phone; it would be nice to plan routes and the like on your phone and send them remotely to your sat nav when they next pair up.

But you do get notifications from your phone; these can be read out but requires you to press the play button to do so, fiddly when driving. 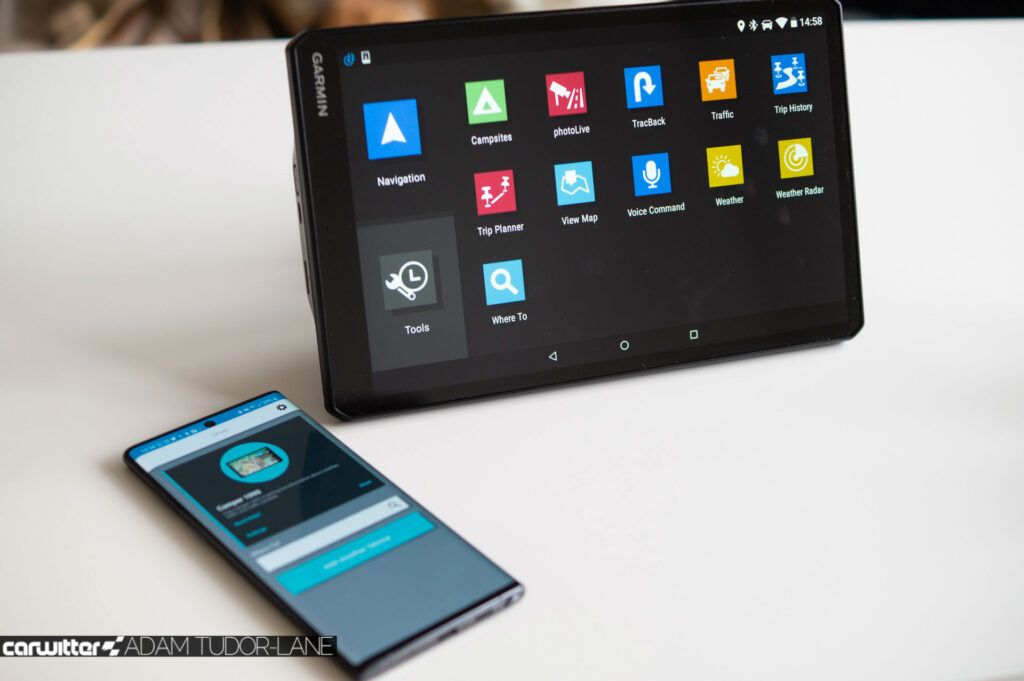 Audio via the handsfree is nice and clear; the speakers on the 1090 are plenty loud enough to be heard above normal road noise. Sadly the voice activation doesn’t work for English UK language currently; this feature would let you control most of the main functions without touching the unit at all.

You’ll also find some of the bespoke Garmin software pre-installed; one is the Fusion Link, which from what I gather, allows seamless integration with Fusion stereos which are primarily installed on boats? The new Garmin PowerSwitch line of devices can also be controlled from the tablet.

Oh, and you can link the Garmin BC 35 wireless reversing camera handy if your car or motorhome doesn’t have a back up camera already. 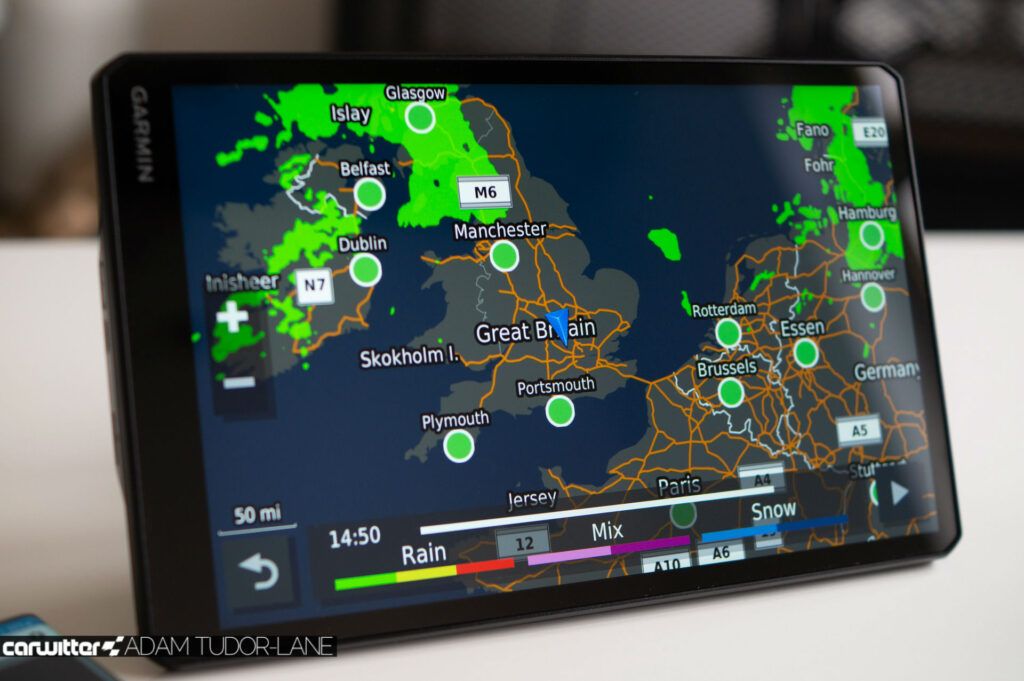 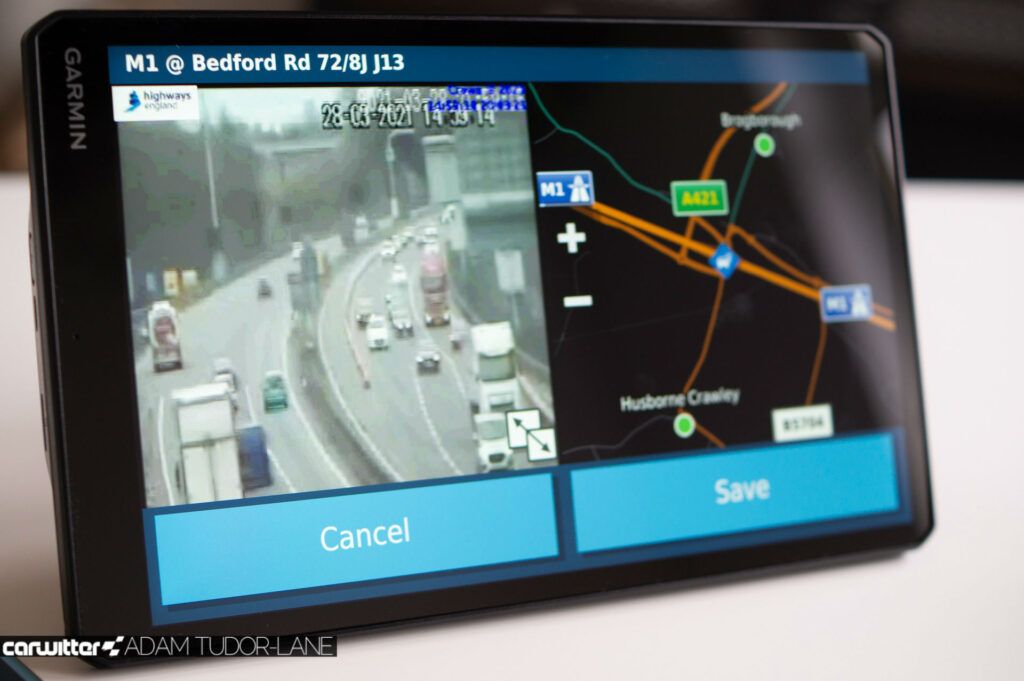 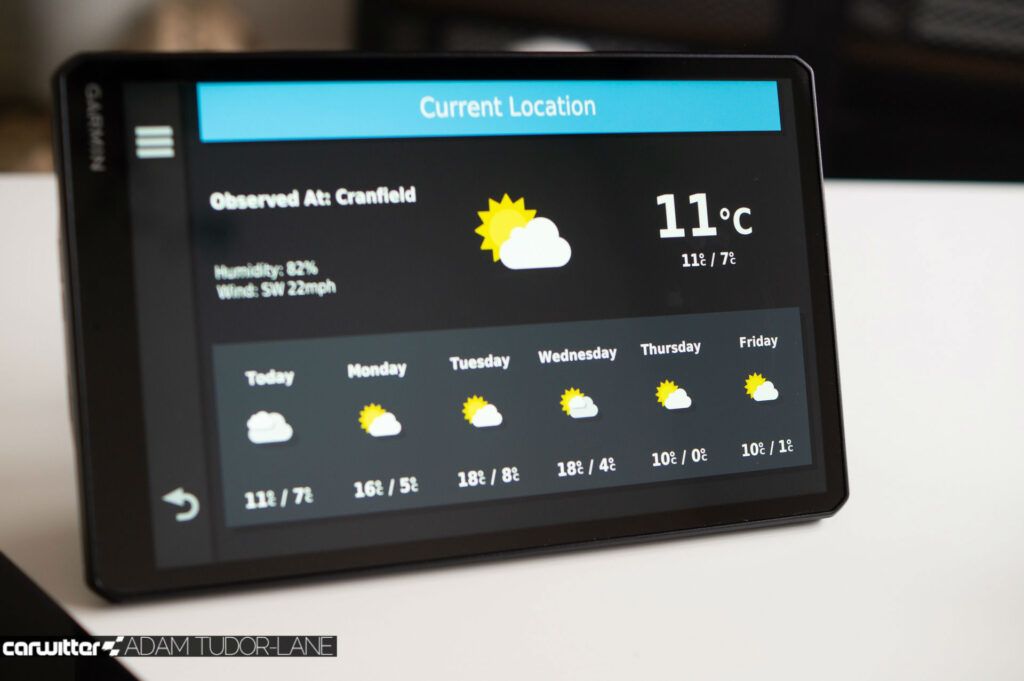 Oddly the ‘Garmin’ logo is on the bottom left of the tablet, which makes you think it needs to be used in portrait mode, you can use it either way, but to get the most from the screen real estate, landscape works best.

There’s also no hardwire option, which would make sense for most camper vans. The 12v adapter has a proprietary connector on it, so you have to sacrifice a whole socket to have the mount plugged in. The only way around it is to wire in an additional 12v socket and hide that all behind the dash somewhere.

There’s a sticky mount in the box, so you can attach a pad to your dashboard for the mount, along with a bracket that can be screwed into the plastic. So a hardwire kit would make total sense. 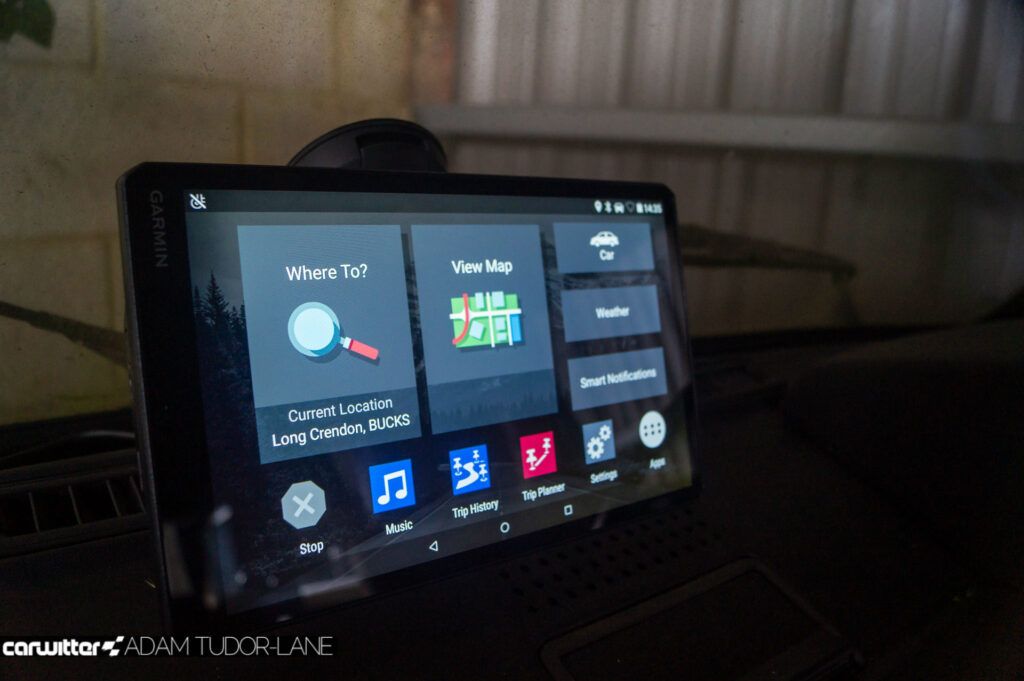 You can’t fault the screen size, navigation and overall quality of the camper 1090.

Considering the £559.99 price tag, the specs of the tablet are pretty low. But you have to consider the whole package, the mount that enables you to have an aux out and USB input, the ability for it to power on automatically when the mount gets power, and the seamless data linking via Bluetooth with your phone makes it totally hassle-free.

Using a tablet to do the same would either require rooting, a custom launcher, then faffing with a hotspot for your phone every time. That’s without finding a decent mount that will take the weight of a 10” tablet.

If you own an older car, the Camper 1090 equals a total upgrade in your infotainment. If you have enough space on your windscreen, that will be the easiest install. But the smartest way would be to find somewhere on your centre console to mount it permanently.

Or, if you have a motorhome or tow a trailer, the routing of the Camper 1090 will keep you out of trouble no matter where you go.

Five electric car brands to look out for in China