Ford are going all out with their SUV style makeovers, first there was the Fiesta and most recently the Focus Active, but how does the jacked up ruggedised treatment work on their smallest car, the Ka+?

Our test model came with only two optional extras, the ‘Canyon Ridge’ burnt brown/orange that’s exclusive to the Active, £750. The other was the City Pack, which adds rear parking sensors, power, heated folding mirrors and electric windows in the rear, £350.
Total cost £14,545. 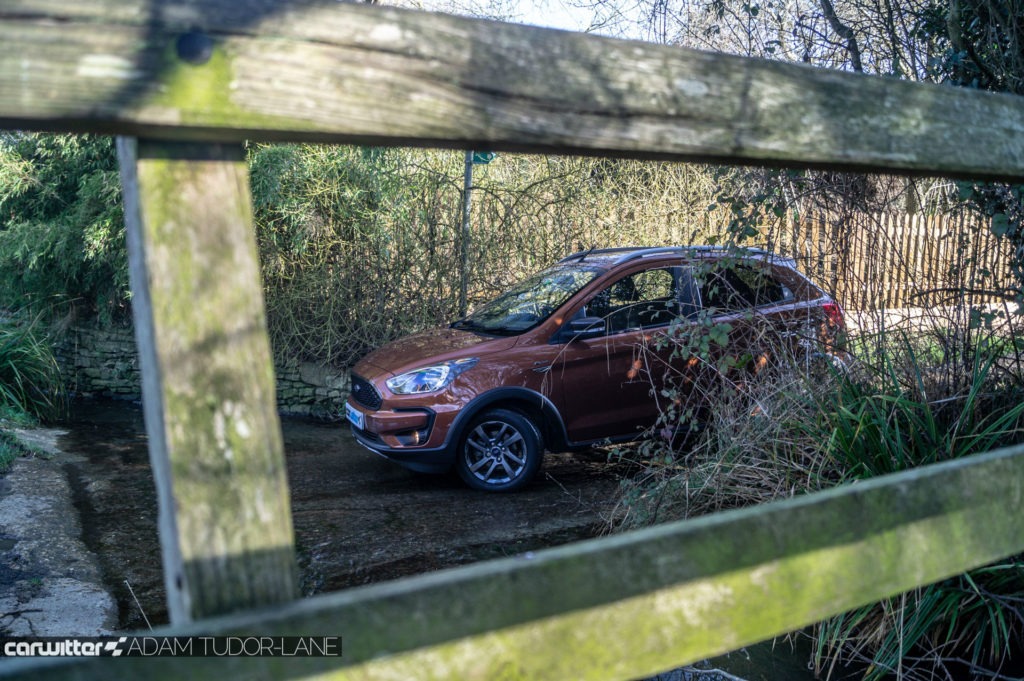 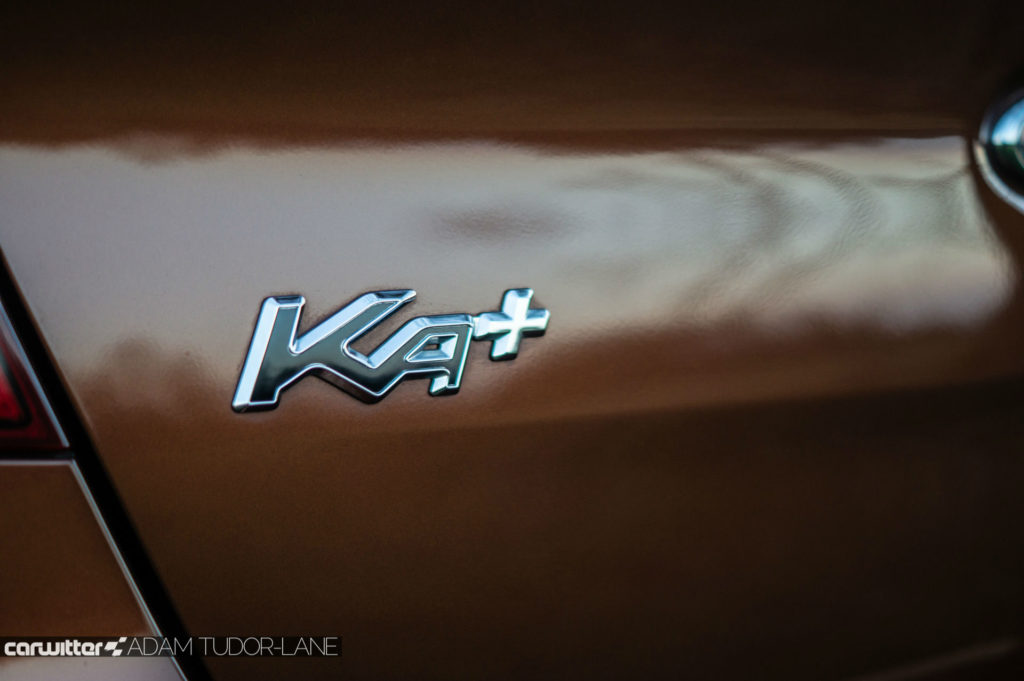 I can’t say I’m a fan of the normal Ka+, it’s too big to be a Ka and it just looks a bit…emerging markets, especially if you opt for the boggo ‘Studio’ model in white.

Active trim makes the Ka+ far more premium. It features different bumpers, plastic trim down the sills and along the arches, as well as a set of roof rails. It’s also been raised by 23mm to give it a taller stance, a thicker anti-roll bar and electronic stability control help negate any potential rollover incidents, and the tyres have become skinnier with some added sidewall, 185/60 instead of the normal 195/55’s on the normal car.

The Active adds far more appeal to what is in reality a rather dull, characterless city car. 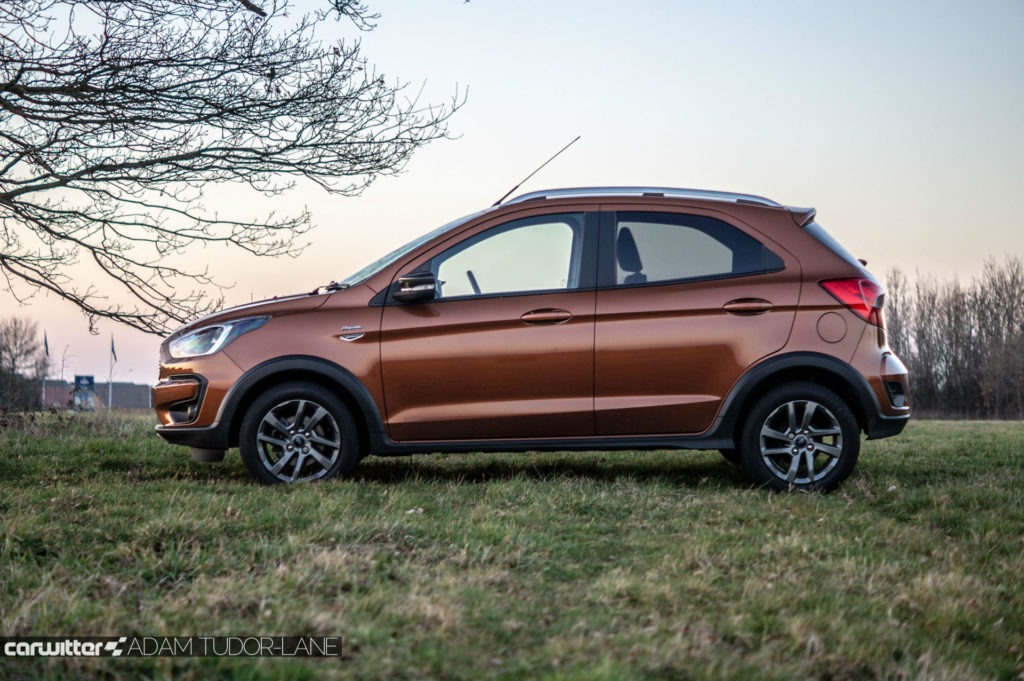 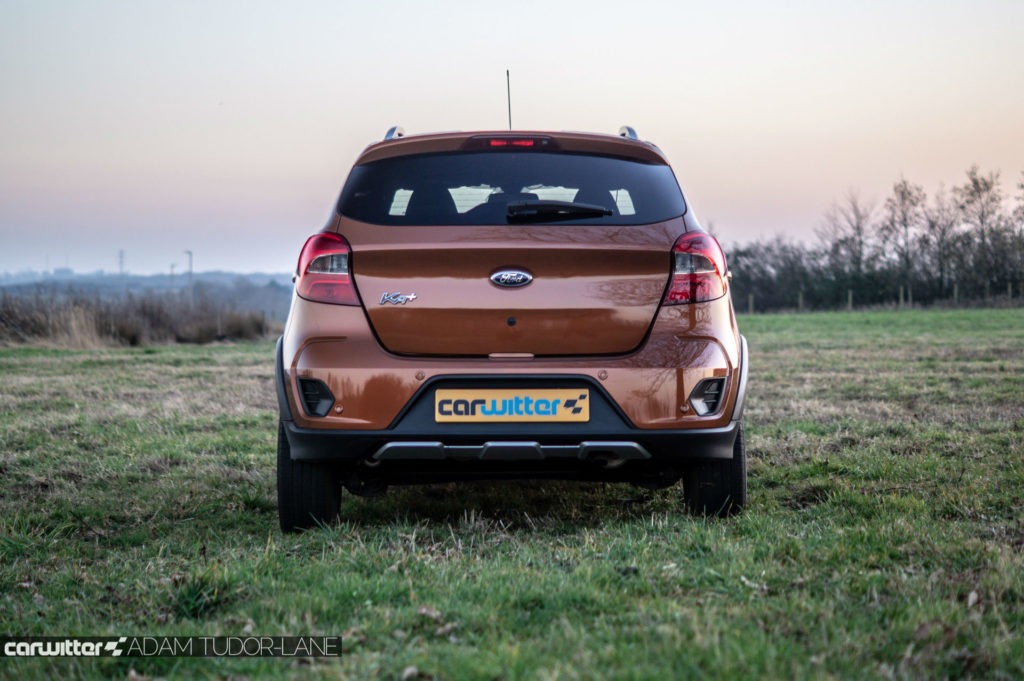 You have a choice of two engines, the 1.2 litre three cylinder TI-VCT, which produces 84 BHP and 115 Nm of torque, or there’s a single four cylinder 1.5 litre diesel which makes 95 BHP and a healthier 215 Nm of torque.

Our model featured the most popular 1.2 litre, it’s a rev happy lump which doesn’t mind being thrashed around town…but that will cost you fuel economy. Over  150 city miles, working the Ka+ all the way through the rev band we only managed 33 MPG, Ford rate it for 41.5 Urban. Naturally with a lighter right foot and some long A roads this would increase, expect around 38 MPG at most. 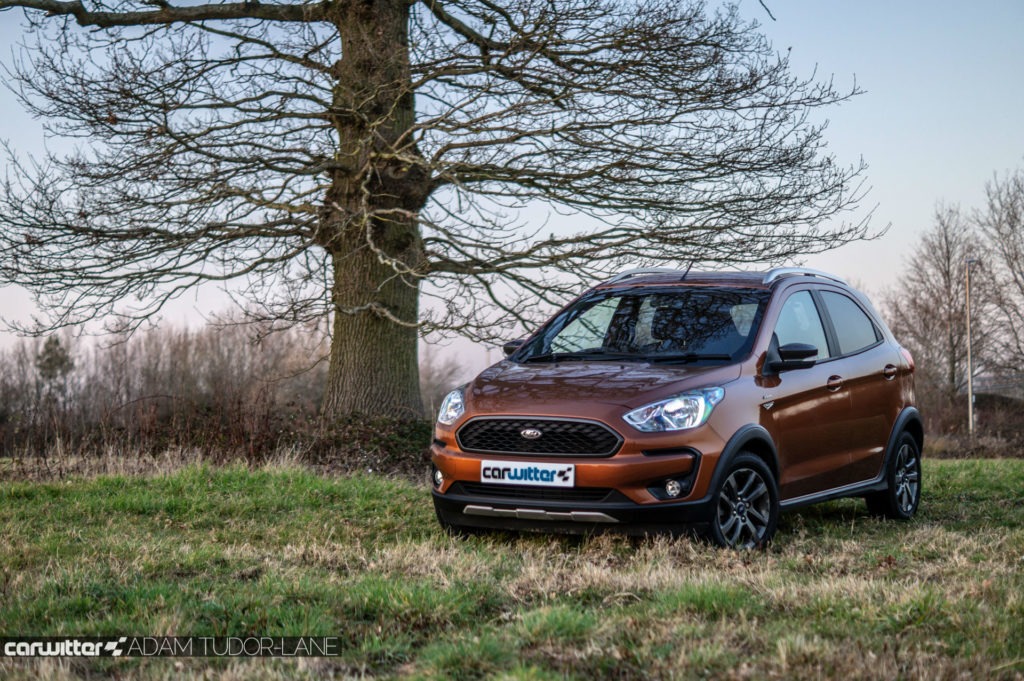 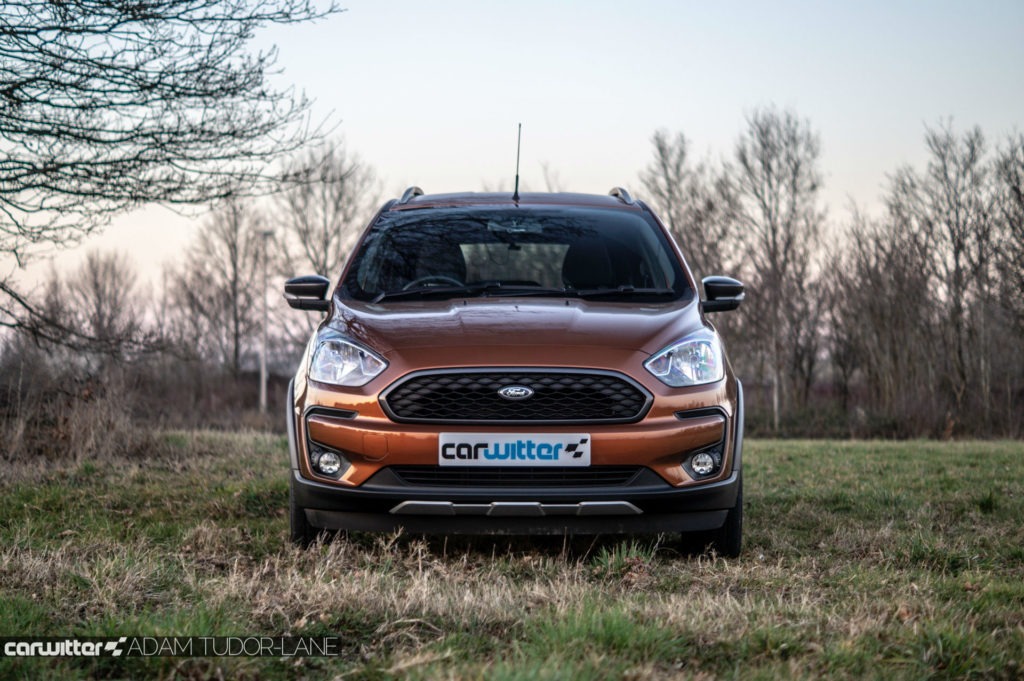 Built up, urban driving is where the Active is most at home. The fizzy little 1.2 gives plenty of poke up until 30/40 MPH, it’s surprisingly nippy off the line. Higher speeds you find this falls away rather quickly, inclines will have you grabbing at gears and you’ll also want to drop a cog if a quick overtake is needed.

Handling is on the floaty side, sadly Ford haven’t been able to hide that extra height as they have in the Fiesta and Focus Active. At times it feels as though the Ka is on stilts, teetering around corners or under swift, emergency style evasive manoeuvres.

It does however soak up lumps, bumps, potholes and even whole speed bumps with ease. You can forgive it being a bit wobbly as this little Ford is superbly comfy to drive. 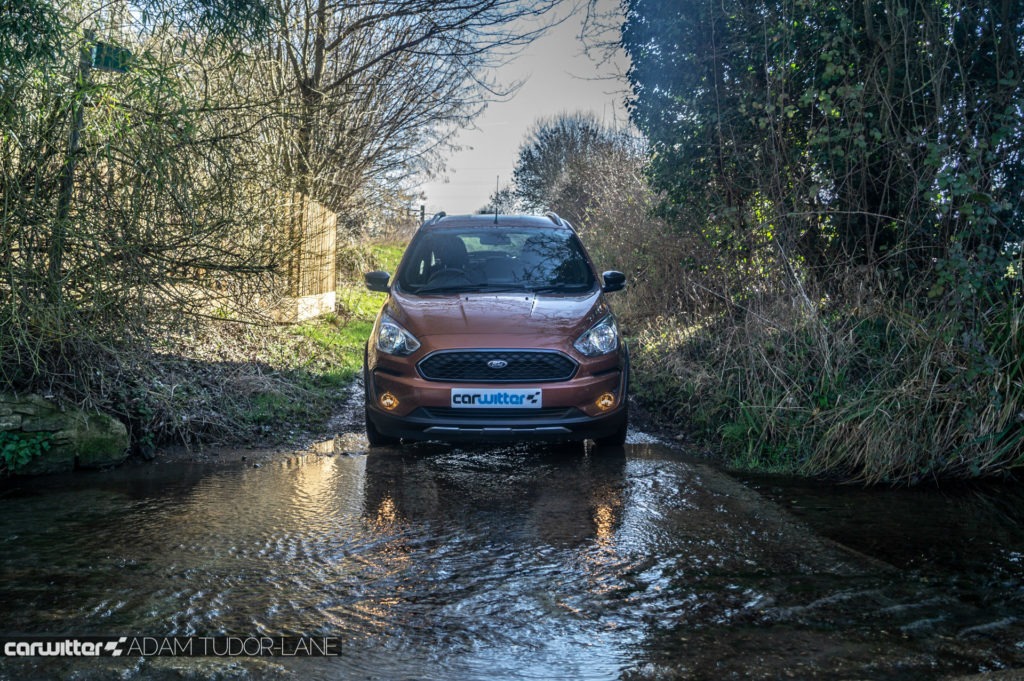 A five speed manual box is the only option for any Ka, thankfully it’s damn good. Nicely weighted with a short throw, it helps give the Active a somewhat sporty nature. Steering also has a decent heft to it, all too often these days the controls of cars are made laughably light as though you’re playing a simulator. Not so in the Ka.

Where the raised ride height shines is over sections of unpaved road or green lane. Negotiating a ford and heading down a rutted farm track wasn’t an issue for the little Ka. It didn’t grind or scrape once. Deep mud, sand or anything more than damp dirt under rubber would show up the lack of all-wheel drive pretty quickly, a Suzuki Jimny this certainly isn’t. 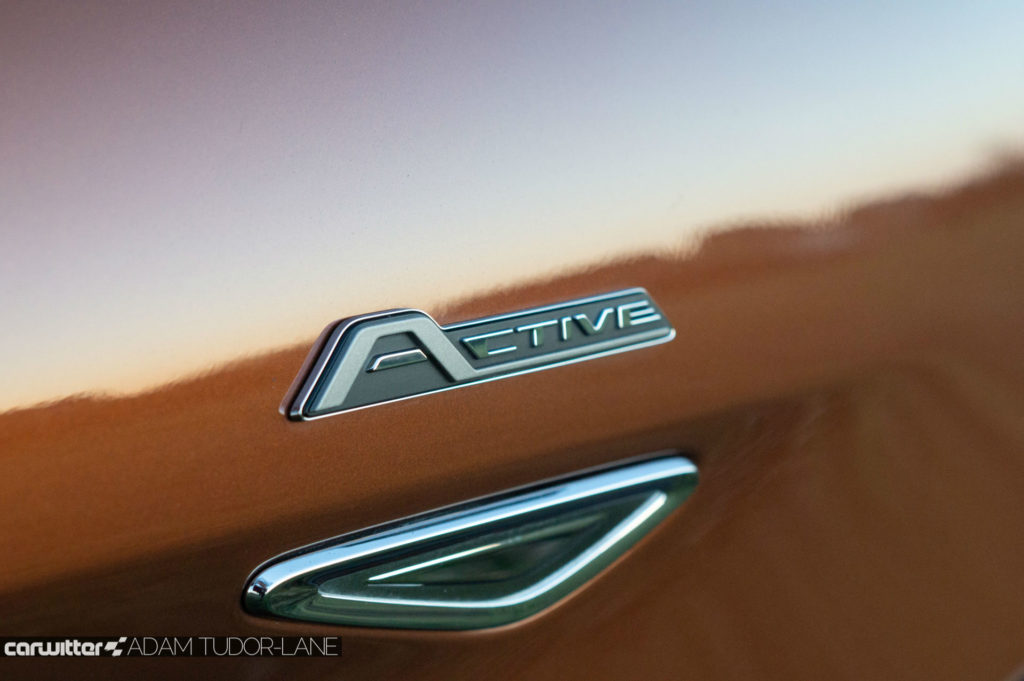 Inside the Active you notice the raised seating position, you sit looking over the bonnets of other city cars and superminis and it helps the Ka feel far larger than it is.

Surprisingly enough this generation Ka is nearly the same size as the current Fiesta, the wheelbase is just 4mm shorter. That means interior space is equally as roomy, it doesn’t feel as though you’re on the lap of your passenger, there’s also plenty of storage. Bottles fit nicely in the doors, rear seat passengers have back seat pockets, and there’s also a tiny carpet lined cubby in the dash on the driver’s side. 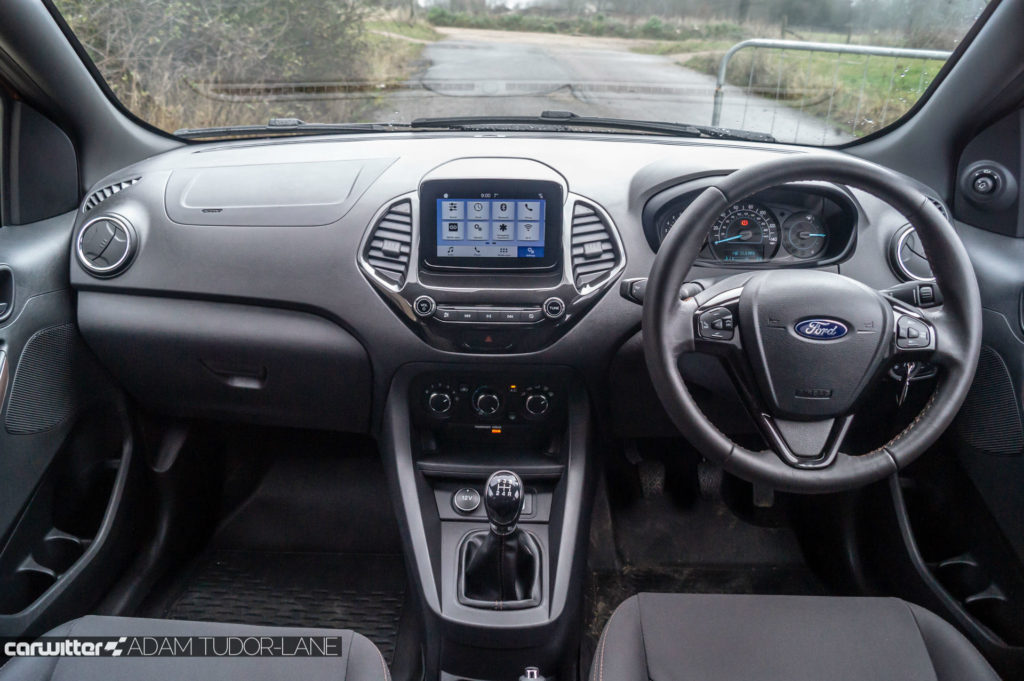 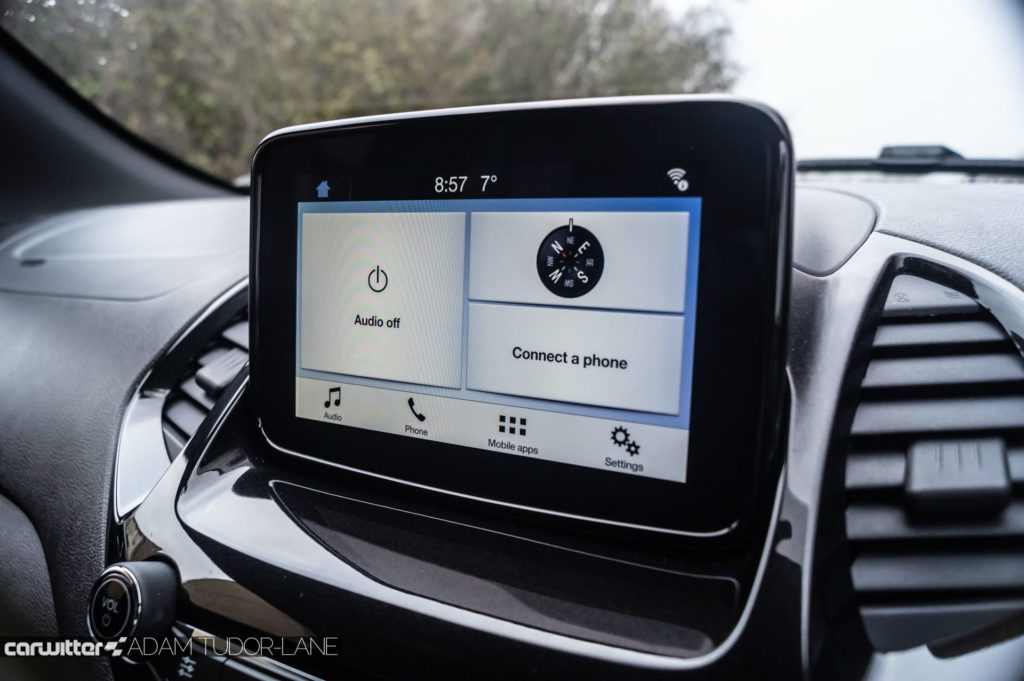 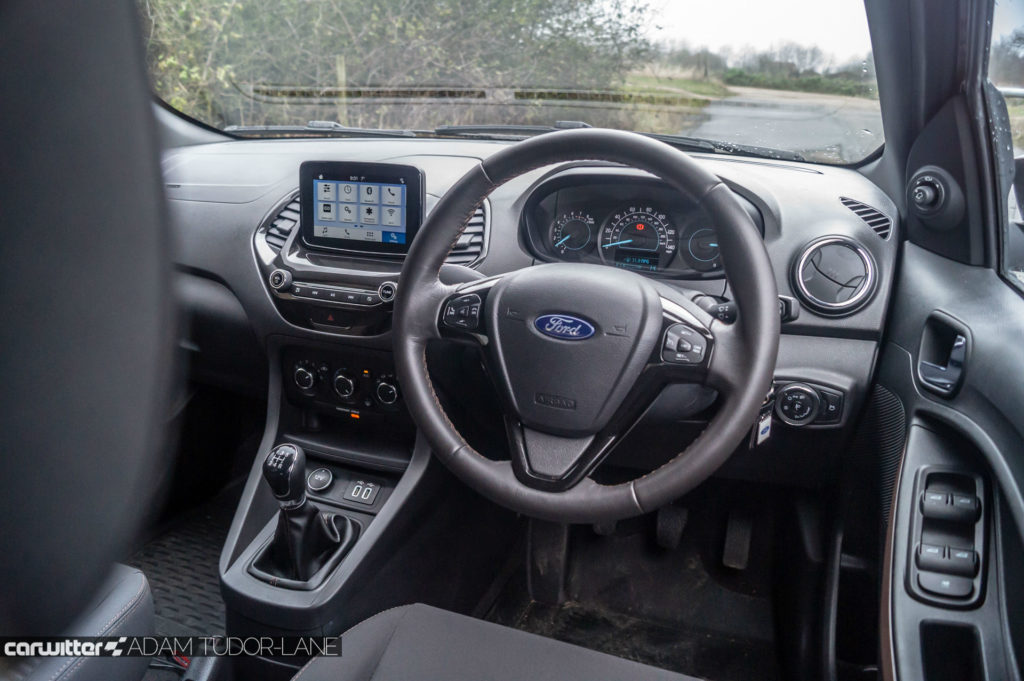 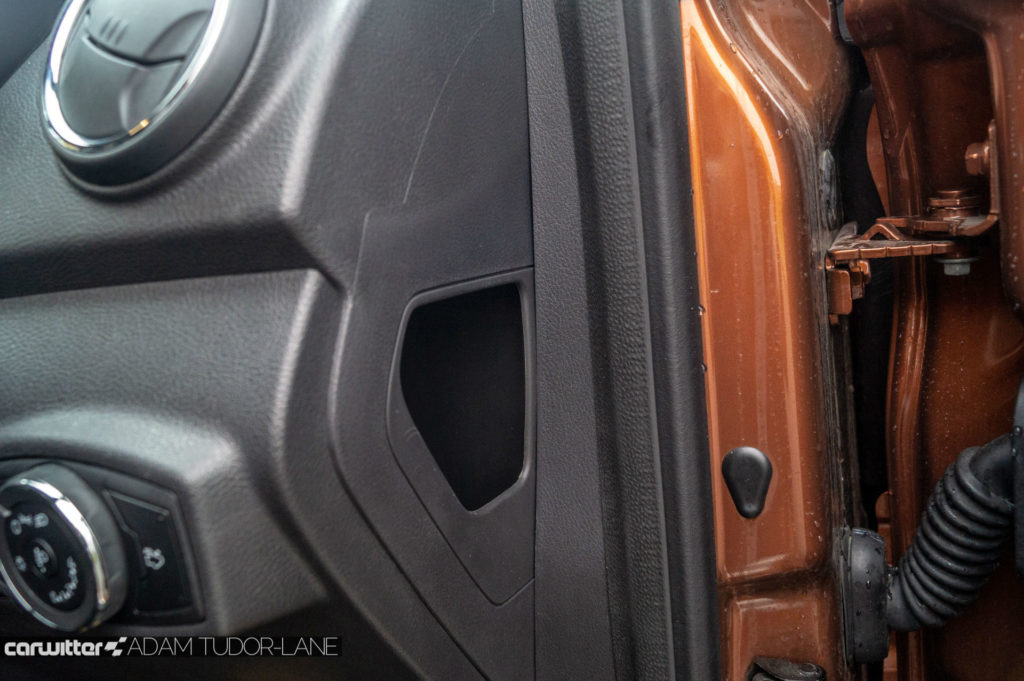 Up front you find a 6.5 inch touchscreen that runs the same infotainment system as the rest of the Ford line-up. There’s no nav here, with no option for it either, thankfully there’s Apple CarPlay and Android Auto.

Rear seat legroom is on the tight side for anyone six foot, there’s enough space for an adult to sit fairly comfortably for short journeys. Kids will fit just fine.

Boot space is laughably the same as a Fiesta measuring in at 270 litres, so don’t think you’re being cheated when it comes to load lugging ability. 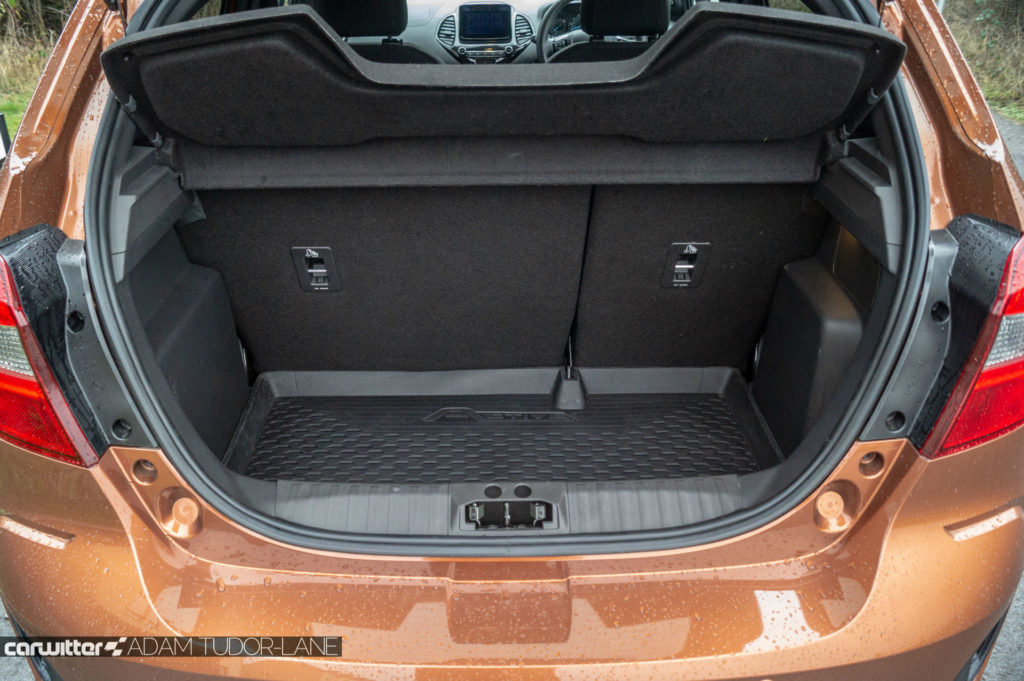 For blasting around town the Ford Ka+ Active is a hugely fun car to drive, the wobbliness and wheel spinning torque around corners all add to the character of this perky little hatch.

Lack of kit is it’s only real downfall for the money, it would be nice to see some active city braking, heated seats, phone charging pad, auto lights, wipers etc as standard. Sadly there’s no autonomous braking to be had at all, nor phone charging, the rest can be added on in ‘Packs’ but you’d think a range topper like the active would have these things at this price point.

Oh, and the Active looks awesome in white. 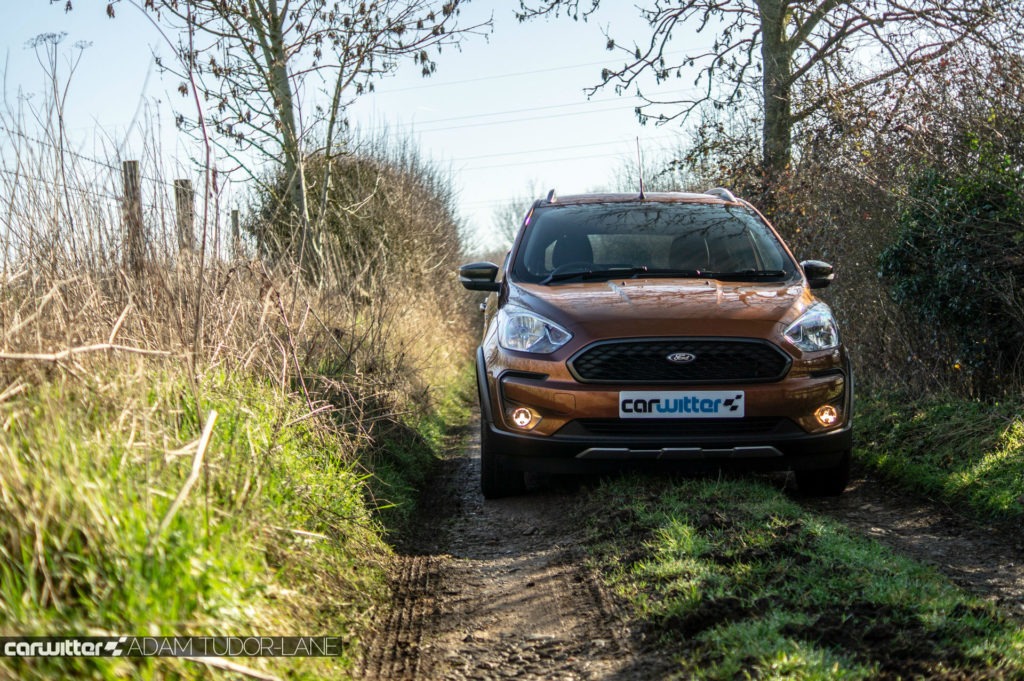