Yes, it’s another electric crossover…joy. Citroen are however hoping to add some French flair with the new Citroen eC4, with its hark back to the GS lines of the 70’s. But is it any good?

Prices start at £32,180 for the entry level model, which is decently specced and comes fitted as standard with a heat pump – something all UK EV’s should have from the off. Ahem, Volkswagen. 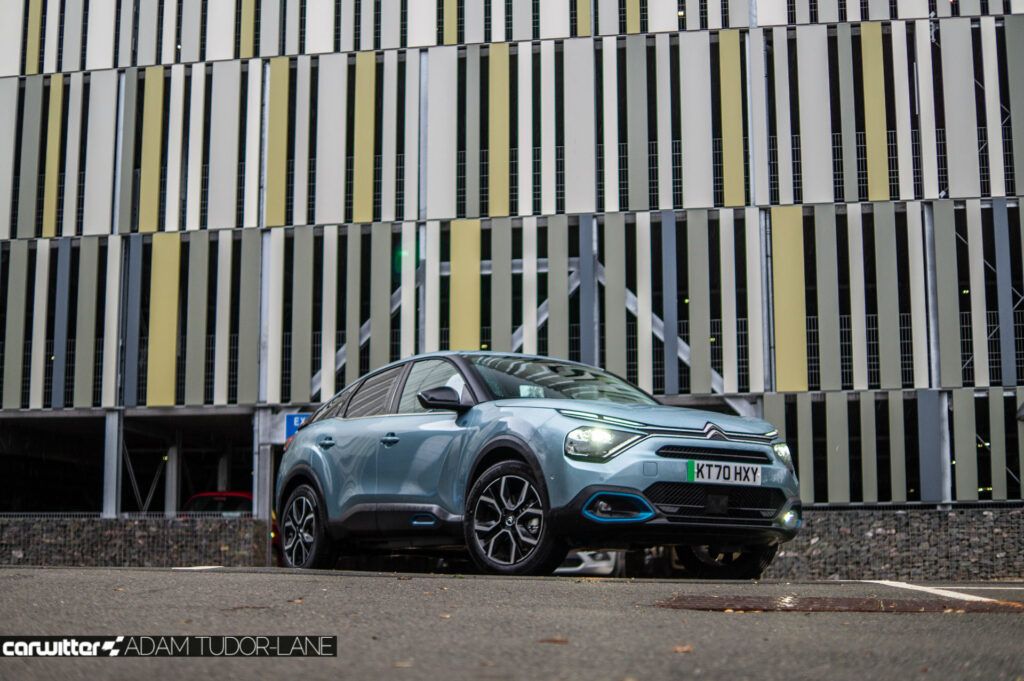 It’s different, it won’t be for everyone, but it also has to be applauded for it. The rear end is all the retro GS you’d want it to be, while the roof profile remind me of the C6.

Think of it as a Cactus mating with a GS and this is the offspring, sans the clever Air Bumps.

Chunky at the sides with high doors and smaller windows the C4 is like an inflated hatchback, you remember what those are right? Those five door things people used to buy? That is what Citroen are claiming it to be, but park it next to any other small crossover and it will look like it belongs. Park it next to a VW Golf and a Peugeot 308…yeah, you get the point.

You could say the design is fussy in places, but at least it’s different and stands out. Bravo Citroen. 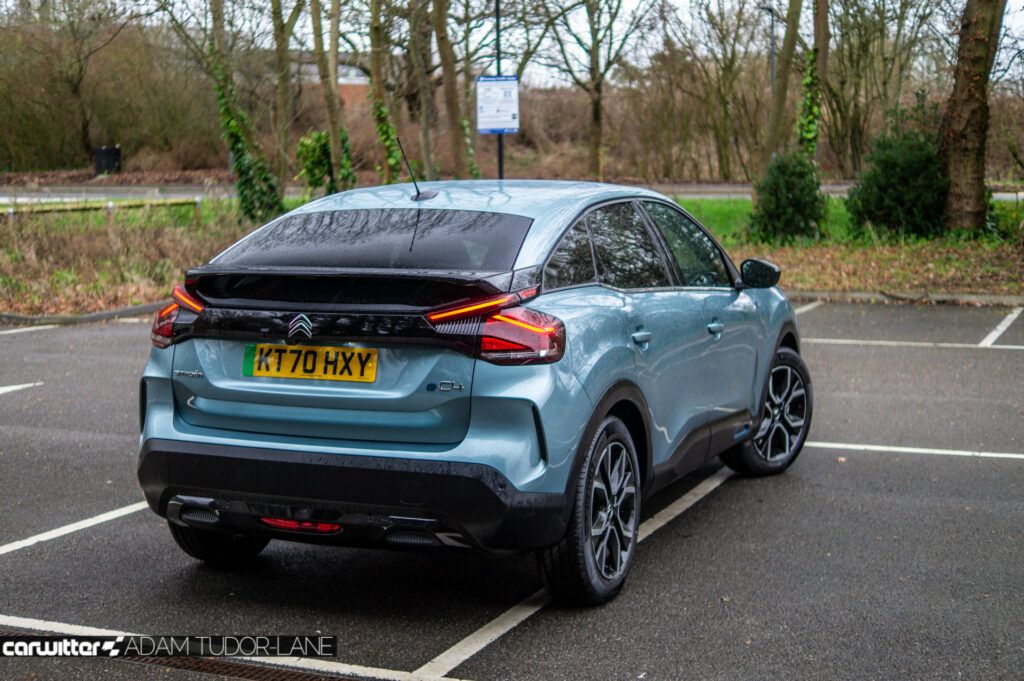 PSA Group, or Stellantis as it shall now be known are going a different way when it comes to electric power. Instead of offering EV only, one body vehicles like the ID.4, BMW i3 etc they’re seeing electricity as just another engine.

So yes, you can have the C4 as either a petrol, diesel or pure electric. There’s no hybrid here, or plug-in hybrid.

While that’s a clever proposition as not everyone wants to be ‘driving the future’ and some just want a hum drum boring looking car, it also means they’re strapped to a chassis that has to cater for every powertrain. That leads to compromise. 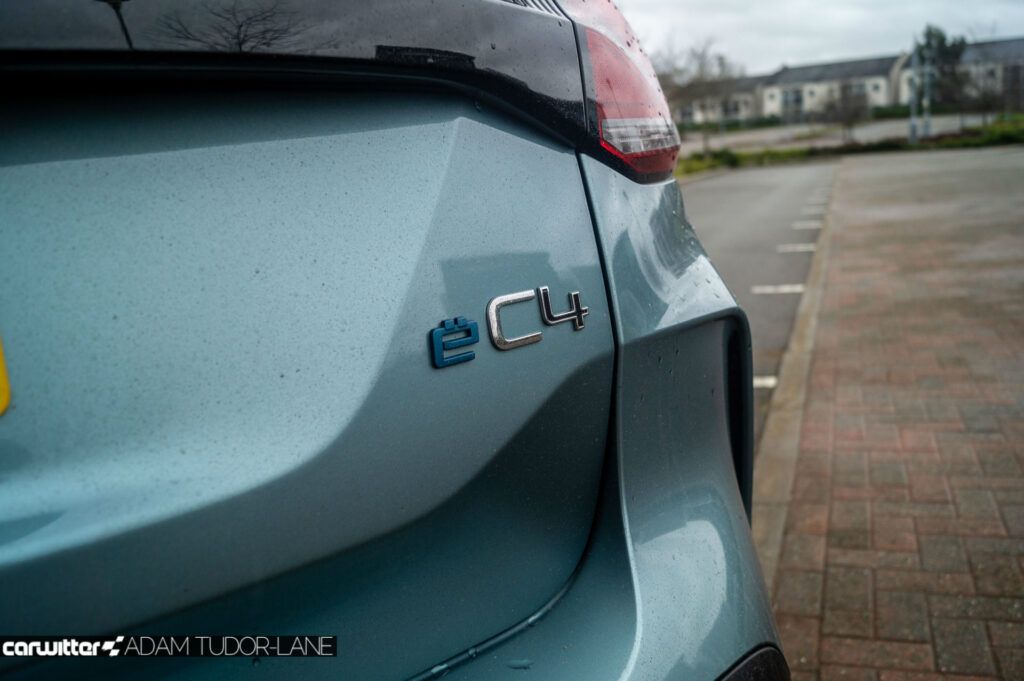 In electric form the eC4 is powered by a 134 BHP electric motor fed by a 50kWh battery. A full charge showed 210 miles range, after a 50 odd mile drive this had dropped to 140 and used ¼ of the batteries charge.

This was over mixed driving, with range dipping quicker on fast roads compared to pottering around town. It might only be 20 miles less, but it’s not great for range anxiety as it’s good to have accuracy rather than a guess-o-meter. 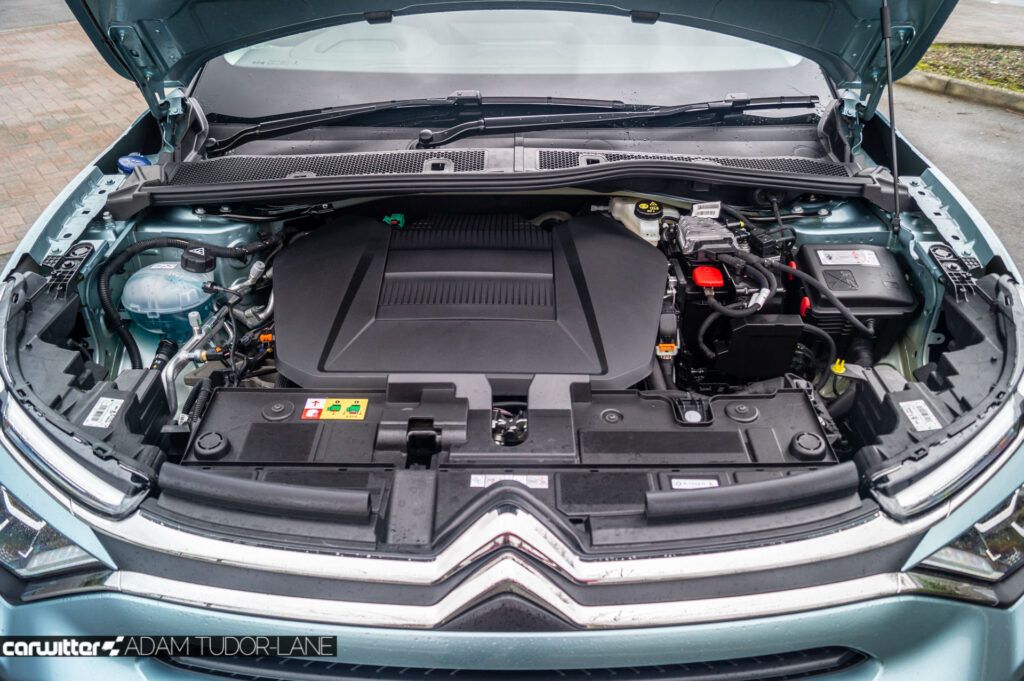 Acceleration is also pretty lacklustre compared to other EV’s out there. It could well be that 134 BHP is a strain for the motor to lug around 1,541 KG. The plucky 1.2 litre petrol weighs in at 1247 KG and has a comparable 129 BHP.

Off the line and during urban scenarios the eC4 isn’t bad, but it’s when you’re up to speed, especially 60/70 MPH and you then want to accelerate for an overtake, it’s just a bit…pathetic. There’s no shove in the back as you’d get with any Tesla, nor in something like the Hyundai Kona or even the Honda e. It’s as if the torque has been mapped out in the software, de-tuned, for this family friendly hatch.

If the future of EV’s is going to be like this, then it’s bloody depressing. The instantaneous nature of an electric powertrain no matter the speed is what makes them so engaging to drive, you have raw power and acceleration whenever you need it, no gear changes, no waiting. But not in the eC4. 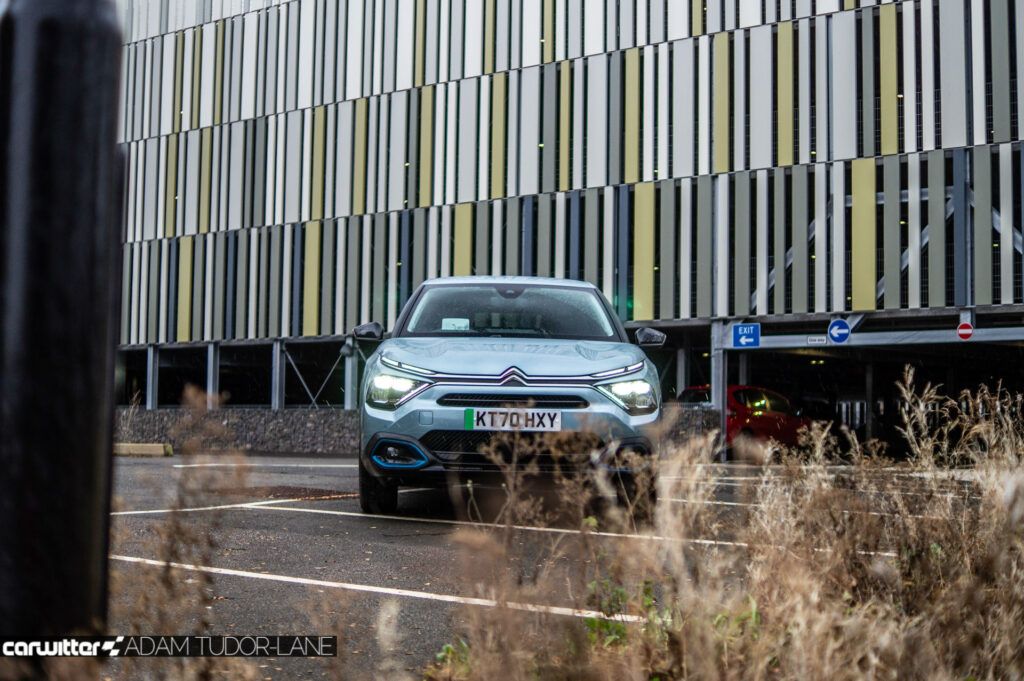 Following in the tread marks of the C5 Aircross the ride is something to be lauded, buttery smooth and masks the imperfections in our road network incredibly well. Combine it with the quiet EV powertrain and it makes driving a serene experience.

You can feel that weight if you come steaming into a corner too quickly, with the eC4 feeling a little unwieldy compared to the almost bantamweight nature of the petrol.

Comfort doesn’t mean that all body control goes to pot either. Cornering is met with controlled roll and the brakes have a nice feel to them even with the regen.

100kW fast charging is standard, which allows an 80% charge from 0 in 30 mins, this pretty much negates the need for longer range as a quick 20 minute stop will easily get you near to full from around a 10-15% charge. 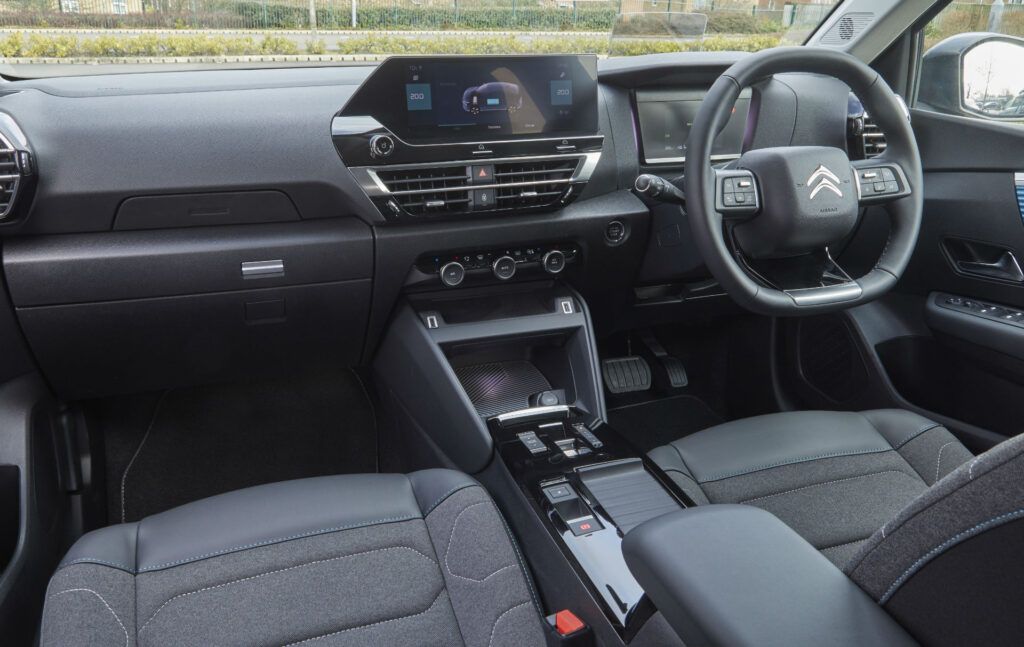 That charismatic design of the exterior is a little lost when it comes to the interior. The high dash is pretty plastic fantastic of a hard nature, it’s all dark grey and there’s little if any of that French flair in here.

You can opt for a ‘tablet holder’ that pops out of the dash on the passenger side, seemingly the ‘Smart Pad Support’ is for either the Apple iPad Air 2 or the Samsung Galaxy Tab A 1.5?? Will anyone ever option them? Unlikely. 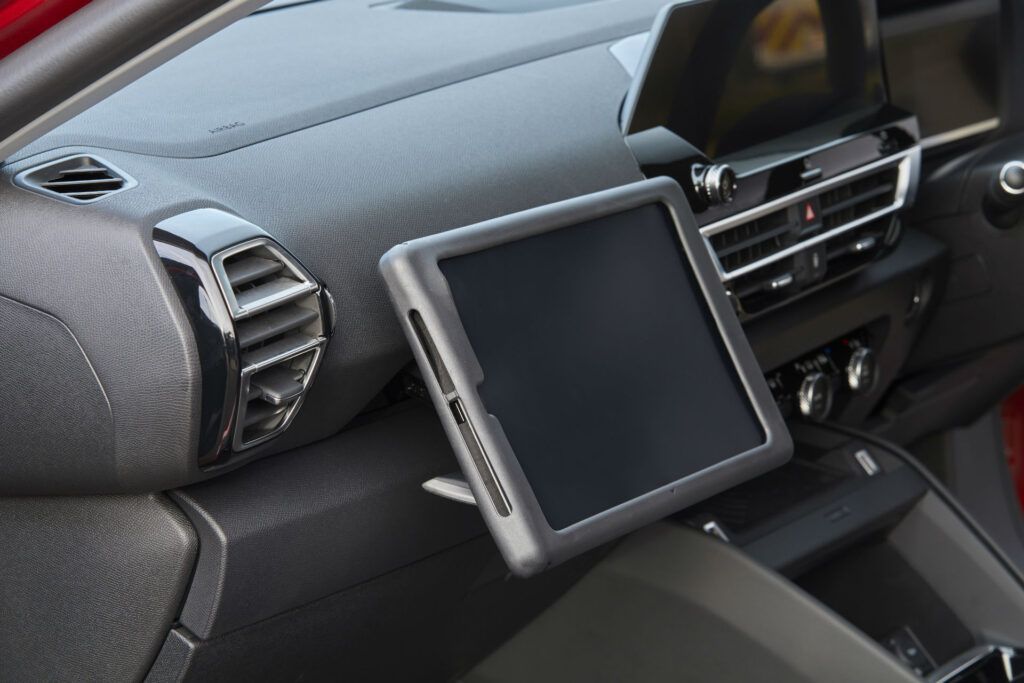 Citroen have kept their ‘Advanced Comfort’ seats, and they are superbly squishy and cossetting. This further adds to the comfy nature of the C4 as a whole.

Rear seat legroom is decent for the size of car it is, and the roofline means headroom is tighter than most other crossovers but still manageable for an average sized adult.

At the back boot space measures in at a comfortable 380 litres, there are two levels so you can forgo that awkward lip when loading bulkier items. 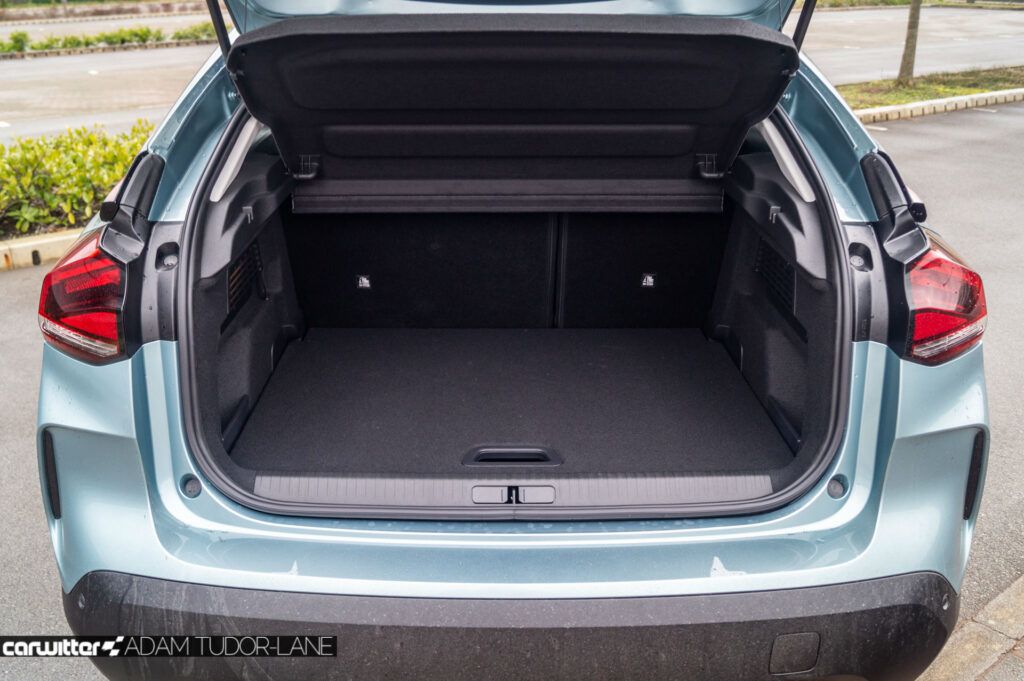 While some may say the eC4 is a hatchback rather than a crossover, its size puts it in the same league as the Mazda MX-30 and the Hyundai Kona so it’s comparable. While the Citroen rides well, that’s about the only trick in the book to set itself apart from more compelling rivals. 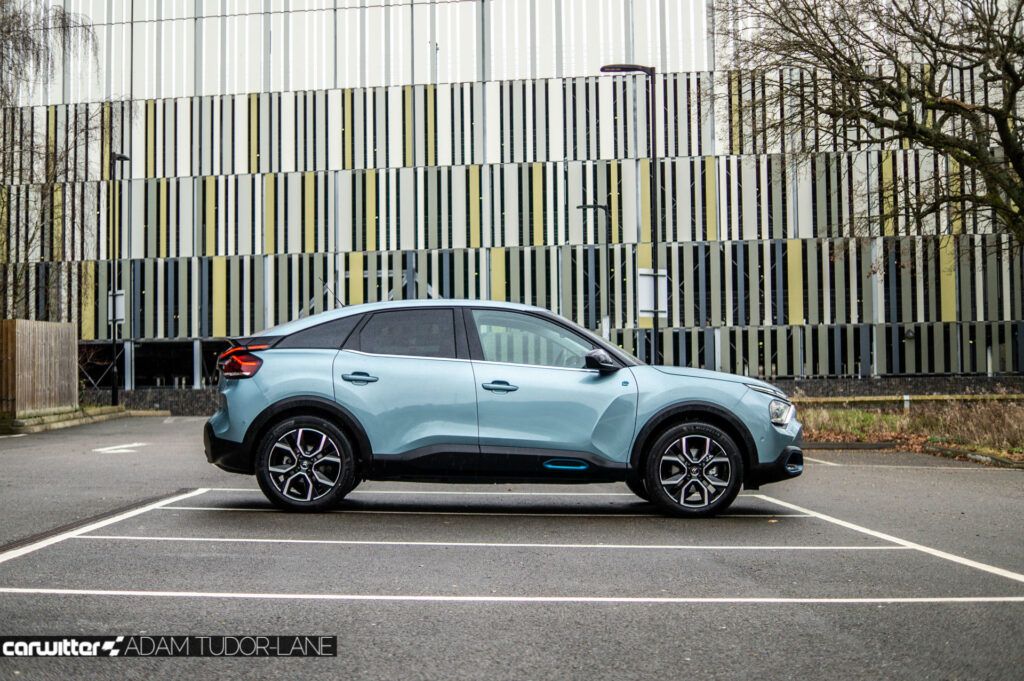 The lacklustre EV performance also makes it hard to actually advocate the eC4 over the 1.2 litre petrol.

Hopefully this isn’t the world we’ll come to occupy when EV’s are mainstream. All will not be comparable, but when performance is barely better than an ICE car, one of the large plus points for EV’s (in our book anyway) has been removed.

UK car output drops 14% for worst February in a decade