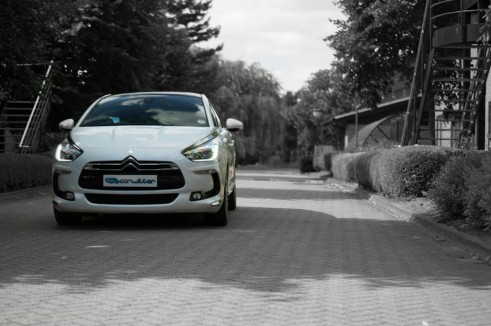 Citroen launched the DS5 last year, it aims to be a luxury executive car, for discerning drivers wanting style, performance and economy.

Options included the White/Black Club leather interior at £1,090, £730 on the pearlescent white paintwork, and £350 on the safe signature pack, which includes Auto high beam and lane departure warning. 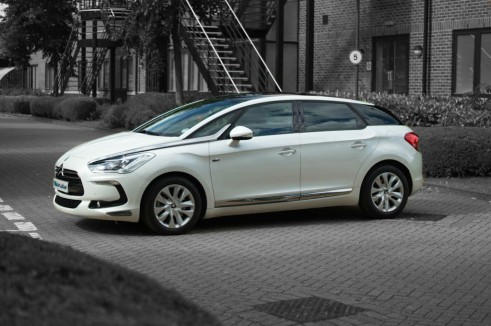 The DS5 is stunning, there’s no other word to describe it. It’s as if it has jumped straight out of a concept car book. Even though it’s a big car, from any angle it’s drop dead gorgeous.

Large headlamps with built in LED running lights sit at the outer edges of the DS5’s nose, the same shape is mimicked in the front bumper with large C shaped air intakes. A floating gloss black grille holds the Citroen Chevrons.

One thing you’ll notice straight away are the large chrome ‘sabres’ that run from the cars nose, along the headlights, and up to the front quarter glass. They are a very different, unique feature, but they work well. 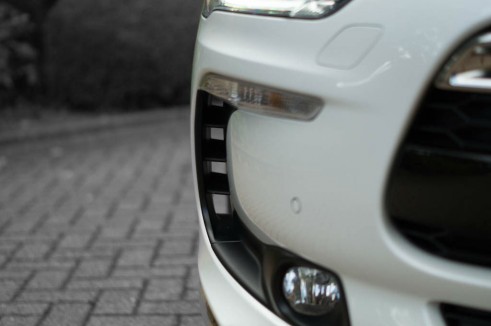 A low swooping roofline gives the car an almost estate like look, at the back it really pulls down into the boot lid, making the rear of the car low, squat and wide. Two chrome surrounds look like double exhausts, surrounded by more gloss black trim.

There is nothing else like it on the road, its pure French style and it looks damn good! 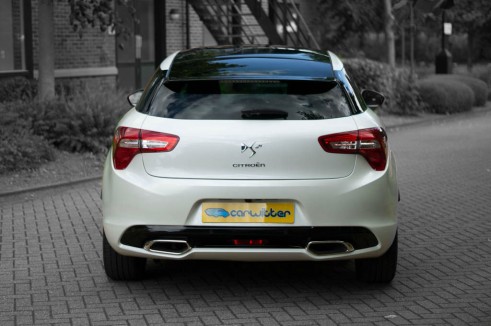 If you opt for the Hybrid4 engine you get a BiK value of 10%, making it a great company car option.

Emitting only 88g/km of CO2 you also get away with no road tax, a pretty good start there!

However…we aren’t really keen on Hyrbid4, its very cool driving around in silence when you’re in ZEV mode.

But pulling away in Auto mode is just sluggish and frustrating, it slowly pushes you away at what can only be described as walking pace. Doing this in front of oncoming cars is rather terrifying! 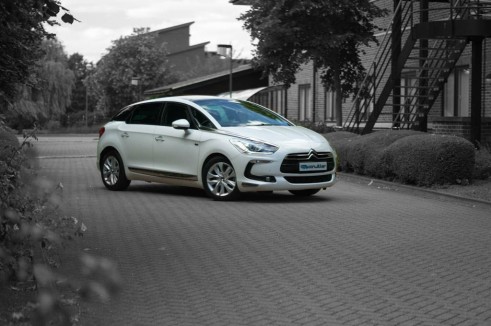 Put the DS5 into Sport mode and this solves the sluggish pull away, but then you have to put up with the choppy automatic gearbox making you lurch forward or backward in your seat.

The best way to drive any Hybrid4 equipped vehicle is to put it in Sport, and whack the gearbox in Manual. It’s still choppy under hard acceleration, but at least you’re in control.

Due to this we only returned 36 MPG over 150 town miles, exactly half Citroens claimed 72.4 Urban MPG figure. 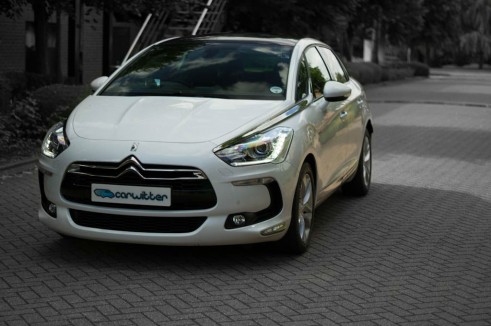 There’s no lack of power with the Hybrid4, we can’t fault it in that department. Any less than 200 BHP and the DS5 would feel sluggish, you probably need the torque of a diesel too; even though they offer a Petrol THP 200 engine.

Ride is pretty hard in the DS5, on normal roads you do feel every pothole and bump.

It’s the type of car that is meant to soak up all the road imperfections, you should glide over them unknowingly. The ride improves when on a motorway, but it’s still a little too hard for our liking.

Steering is accurate and nicely weighted, even if the steering wheel is rather large. Under heavy breaking the DS5 stays flat, but you notice the cars weight when even the ESP can’t stop black lines appearing on the road. 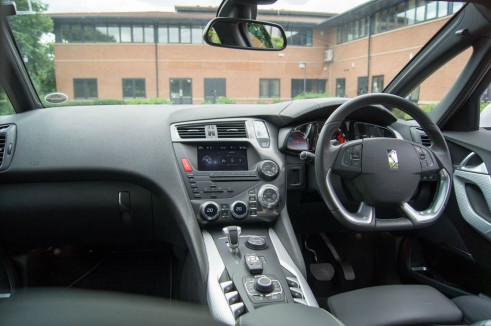 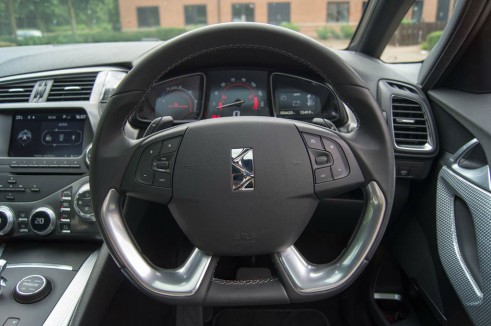 Inside the DS5 is again, stunning.

The designers have based the interior on an airplane cockpit, metal effect trim frames well laid out flick switches.

Look up and you’ll see two individual canopy type glass roof panels, in between them there’s yet more switches that operate the heads up display and the roof blinds.

You really feel like you’re in Top Gun…and that’s before you switch the car on and see the dials! 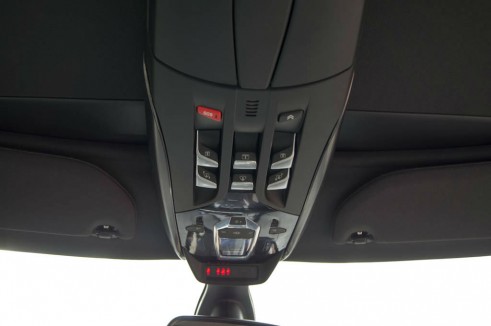 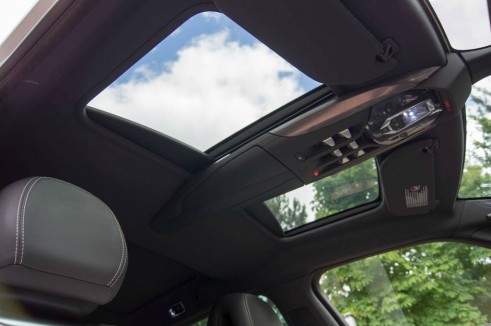 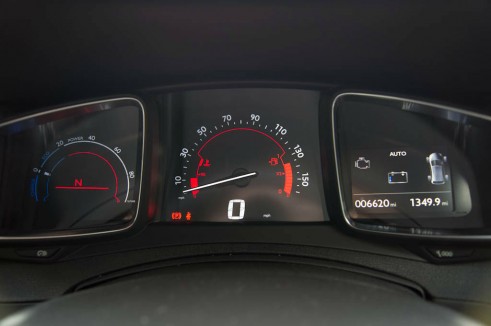 One thing that should be noted though are the clear plastics on the analogue clock and temperature dials; after only 6500 miles the ones in our test car were scratched beyond belief, some sort of plastic film protection wouldn’t go amiss. 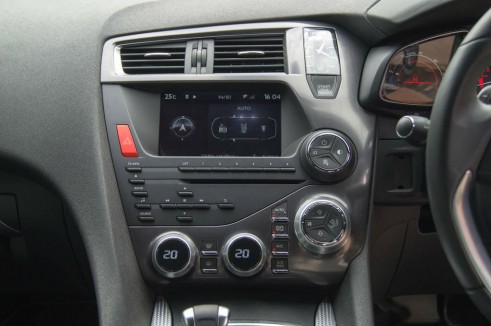 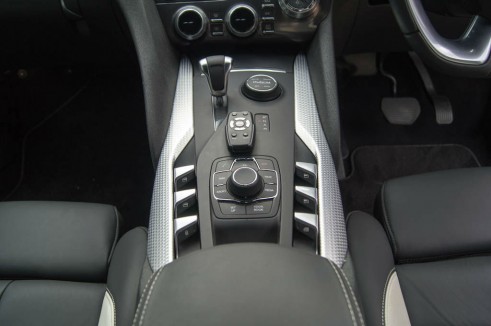 Infotainment menus are well laid out and clear, sound is pretty good too, but we would opt for the premium 10 speaker Denon set up for better clarity and bass. 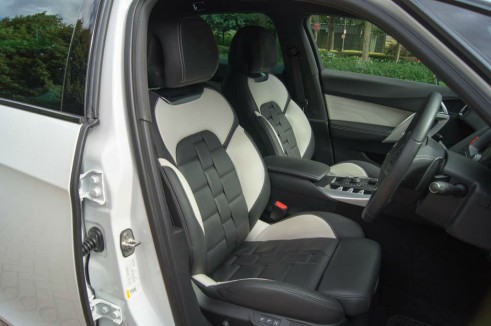 Now we have to mention the ‘watchstrap’ seats, they are a work of art. Covered in two tone fine grain Club leather they give the cabin an air of luxury, and they are unlike any seats we have ever seen. 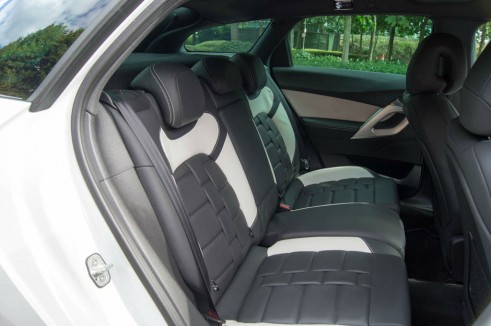 Rear legroom is a bit of an issue…with the seat slightly forward for an average driver you have a few centimetres of room for both your legs and feet.

It’s a little cramped, headroom is better but this is the type of car you should be able to stretch out in on long journeys.

In all honesty Peugeot’s 508 RXH, and even the normal 508 have far more legroom in a similar sized car! 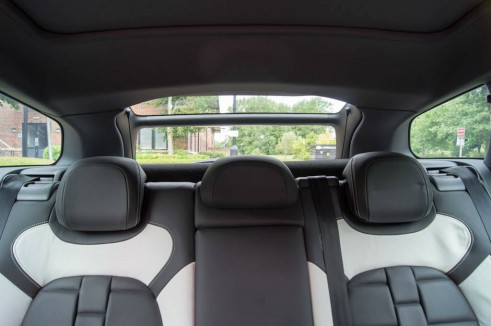 Others have mentioned rear visibility being an issue, I found it perfectly fine. There’s lots of glass at the back so reversing a blind spots weren’t really a problem. 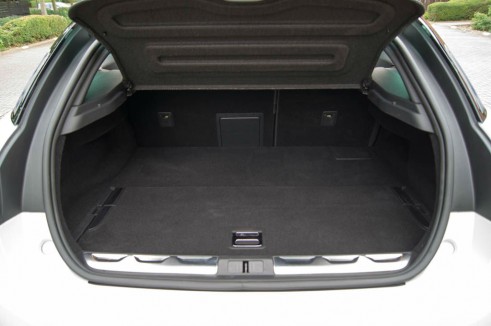 Boot space is ok at 325 litres, it is normally 465, but the underfloor batteries take up a fair amount of room. You could just about get an average sized suitcase in without removing the parcel shelf.

So even with the sluggish Hybrid4, firm ride and lower than average boot capacity would we buy one? Most definitely yes!

On looks and style alone I’d live with the ride and smaller boot. I would much rather drive around in something that people say ‘Wow, what is that?’ than a boxy, generic German executive saloon.

Interior quality and the attention to detail are faultless, the DS5 is easily on par with its competitors on that front. I really think it will still look great, and get admiring looks in 10 years’ time. It’s a future classic for sure. 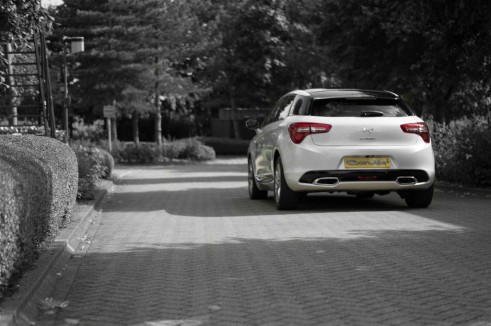