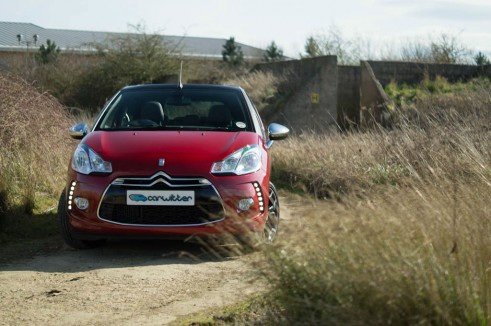 Citroen’s little anti retro hatchback has been a storming success, there are tons of them on the road!

But what if you want a stylish convertible? Well now you have the option of the DS3 Cabrio. 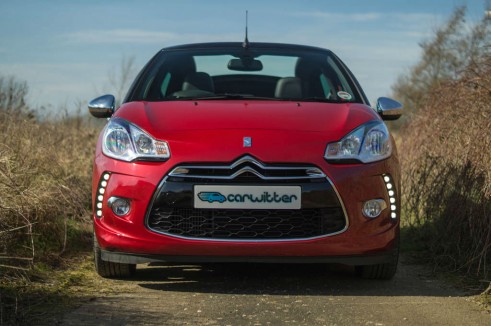 From the outside the DS3 Cabrio looks pretty much the same as any other DS3. 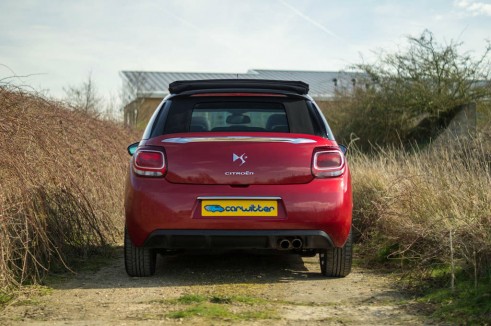 The only tell-tale sign from eye level is the smaller rear window surrounded by fabric, taller folk may be able to spot the soft roof…I’m not one of those people!

It still retains all the funky styling you have come to know over the last few years. 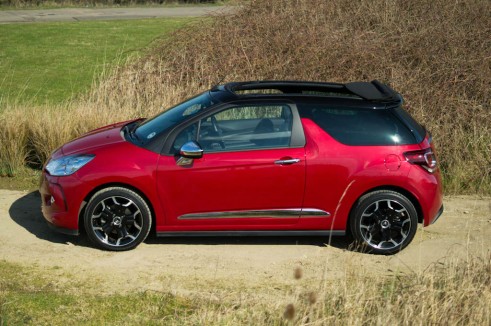 Now we have driven the 156 THP engine before in the DS3 RED, and it’s a great little power plant.

Thanks to its turbo it has low end grunt and picks up pace nicely, it felt a little slow off the mark in comparison to the RED, as though more lag has been added to the accelerator pedal…maybe something to get the emissions down a fraction more? Who knows, it just didn’t feel as responsive when pulling away. 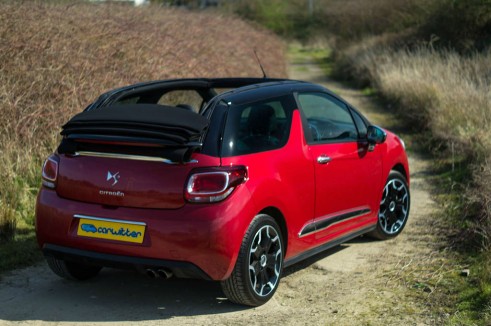 Over 450 miles of mainly A road driving we managed 42 MPG which is pretty decent from this engine, Citroen claim combined MPG of 47, whilst urban is 35.8.

With there being no hard roof above you, noises are obviously louder than in its tin topped brother. It’s no big deal and that’s what you own a convertible for, to be more outdoorsy!

At speed with the roof up everything stays pretty calm and serene, barely any wind buffeting is heard against the roof at all.

That fabric roof actually reclines in two stages. Press the topless button once and it will fold to just before the rear window, press the button a second time and the whole rear glass folds inward and the fabric bunches up just over the boot.

Once the roof is down you will notice a lot more wind noise, and without the front air diffuser lifted up (found built into the top of the windscreen) you can get some loud booming at around 60 MPH.

With the diffuser up the booming stops, but you now get a louder whooshing noise directly in front of you. 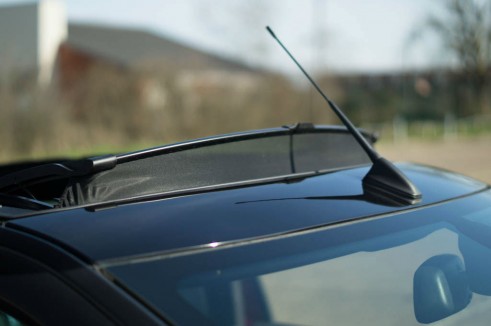 The nicest place to have the roof down is cruising around town, speeds below about 30 MPH wind noise is pretty negligible.

Stiffness doesn’t seem to have been affected at all by removing the metal lid. The DS3 corners well, steering is absent of any real feel but you can still place the Cabrio pretty accurately. 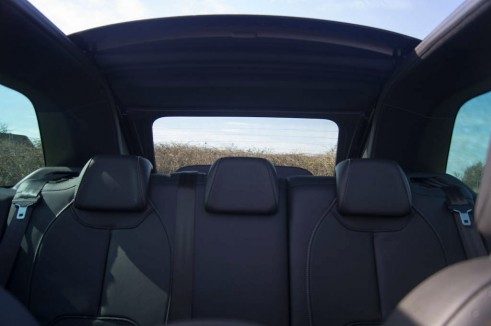 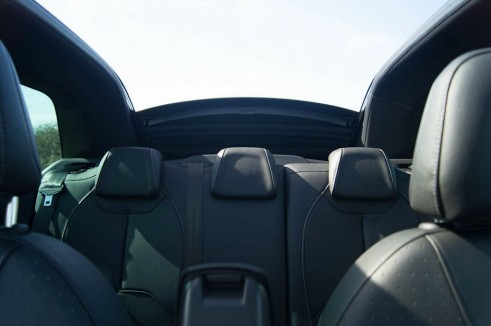 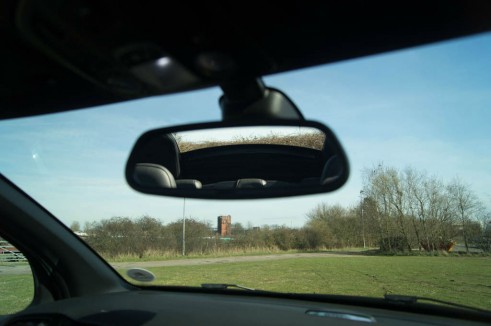 The only thing to mention is that with the roof fully down you can’t see anything out of the rear view mirror. You become a van driver and fully reliant on the mirrors. 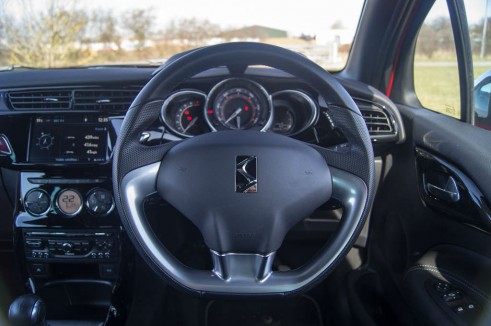 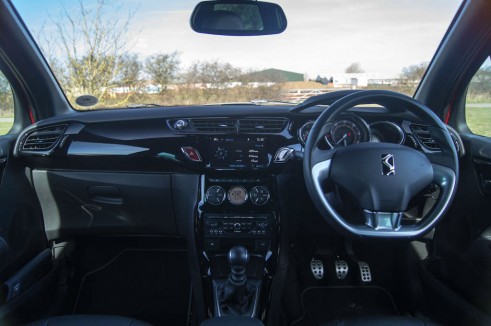 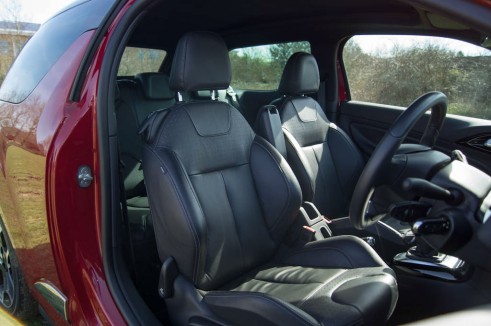 Inside the DS3 remains the same, the only modification is a roof switch just in front of the rear view mirror. 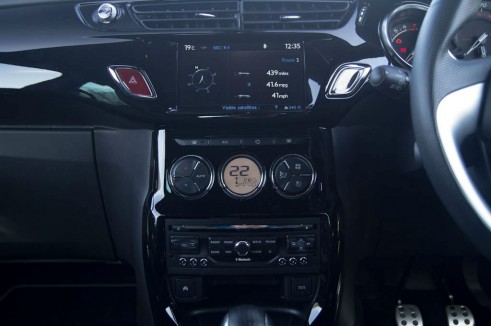 The addition of Sat Nav on our DSport model really finishes off the centre console nicely, it gets rid of the standard bland monochrome screen, unfortunately you are still left with the ugly squared off stereo controls lower down in the stack. 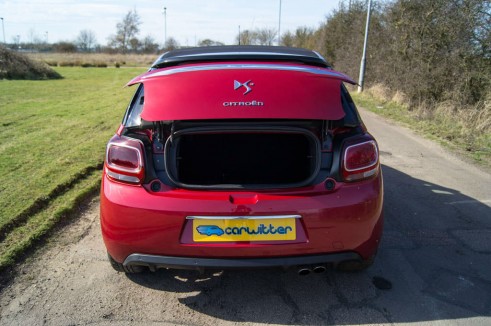 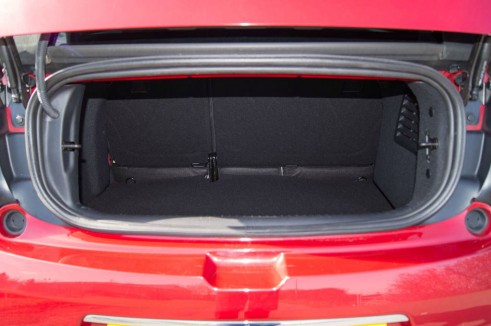 One thing you get a lot less of with the DS3 Cabrio is Boot.

The boot flap now lifts up to cover the rear window when opened, meaning you have a very small opening to get anything inside. With the normal DS3 you can at least get some small suitcases or large overnight bags in with ease.

You get 245 litres which is only 40 smaller than the hatch, but it’s just impractical how small the opening is. 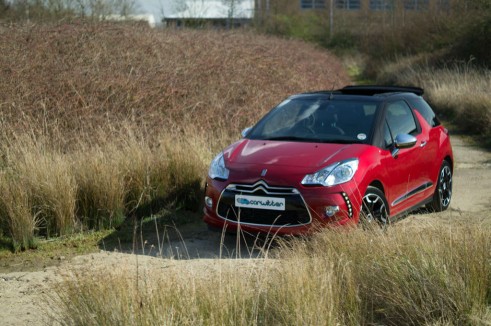 If you are looking for an alternative to the Mini Convertible then the DS3 is a worthy contender. Whilst it doesn’t have the full pillar less experience you still get a wind in your hair feeling, and to be honest I much preferred having pillars in place around me!

In basic trim/engine spec the DS3 also works out around £800 cheaper than the Mini. 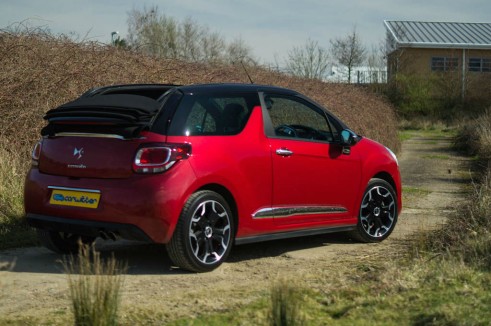 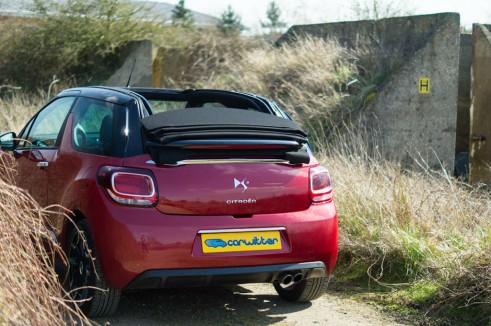