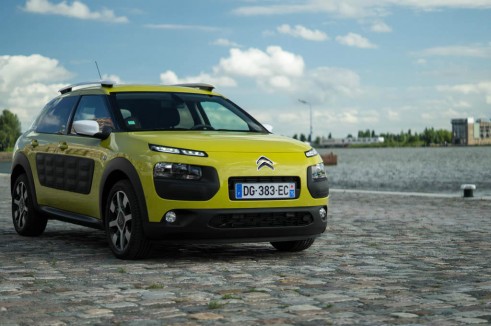 When Citroen announced the C4 Cactus in September 2013 we thought it would forever stay a concept…or that it would be drastically toned down before its final release.

Less than a year later and one is parked in front of me, looking 99% identical to its Frankfurt debut.

We tested both the Petrol PureTech 110 and Diesel e-HDi 92. The PureTech makes 110 BHP and 205 Nm of torque from its 1.2 three cylinder turbo engine; whilst the 1.6 diesel produces 92 BHP and 230 Nm of torque, it also features Start & Stop to help lower emissions to just 92g/km.

Prices start at around £13,000 for an entry level Cactus, whilst a top of the range model will set you back around £18k. 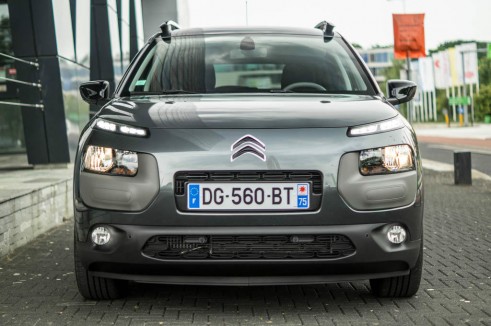 There is no denying that the C4 Cactus looks incredible. It’s as though it has slid off the designers sketch pad and landed on the road. It has a futuristic look to it that most manufacturers don’t seem to have the balls to make.

The Cactus looks like a cross between a dune buggy and a crossover, the roof rails give it more presence and the plastic cladding on the sides and rear make it look very rugged. 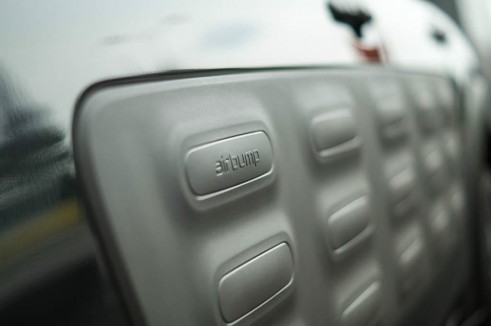 Those different coloured ridges on the side aren’t there for show either, they are called AirBump’s and they are actually soft, squidgy, air filled polyurethane pockets. Basically it’s dent proof, you can park this anywhere and not worry about someone else carelessly opening their door and dinking your precious car, excellent idea! 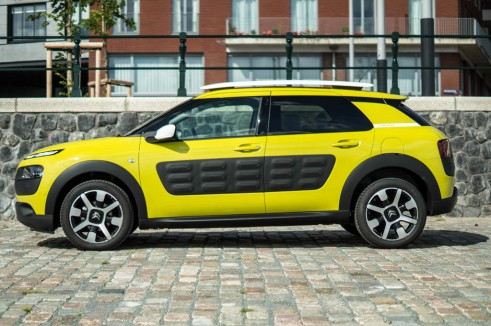 The plucky little 1.2 three cylinder petrol does very well considering what a diminutive unit it is. Power delivery is ample at any speed due to the turbo grunt it’s packing under the bonnet.

Even under hard acceleration it pulls well right up to (and beyond) motorway speeds, more so than we found in the 1.2 litre powered Qashqai. No doubt this is due to the cars lightweight characteristics, it tips the scales at just 965kg – a segment first. 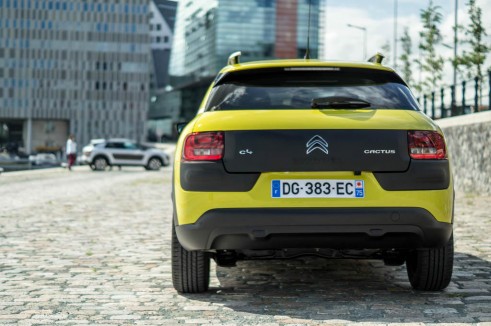 Due to its bantamweight nature the C4 Cactus actually handles really well. It glides effortlessly over rough roads and potholes with nothing more than a dull thud being heard in the cabin, but this pliability doesn’t compromise the handling in the corners. Body roll is minimal, and even when really pushed there is little weight transfer to be felt.

With its short overhangs it really does have a MINI’esque quality regarding its handling, you instantly know that the wheels are at each corner, it feels very planted on the road. 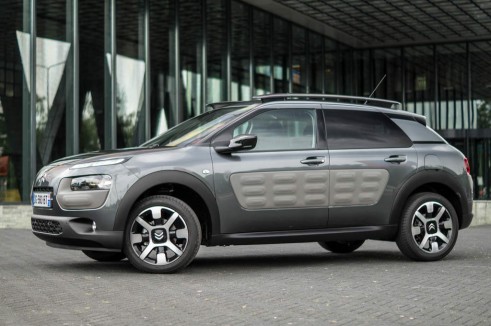 The gear knob is the same found in the Peugeot 2008 which we felt was a little clunky when making changes, the vague movement lets down what is a very well matched ‘box.

Steering is on the light side, but this makes it easy to manoeuvre around town. 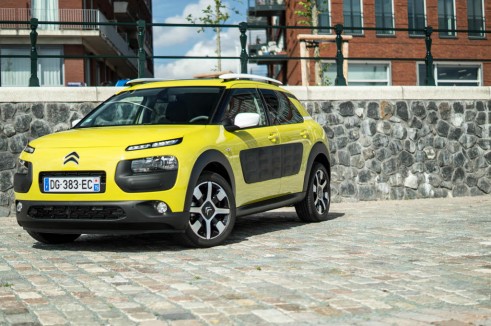 We also drove the 1.6 litre diesel engine with the ETG6 gearbox. Again this has plenty of power for the weight of the Cactus, there wasn’t any real noticeable difference between the two engines tested. The only down side to the Diesel was the ETG6 clutchless gearbox…we have had run ins with it before and it still has the same lurchy gear change. We must admit it’s less boat like than we experienced in the C4 Picasso, but you’re best off sticking with a manual.

Oh, and the diesel is somewhat more noisy inside the cabin than the 1.2 petrol, especially at higher revs. 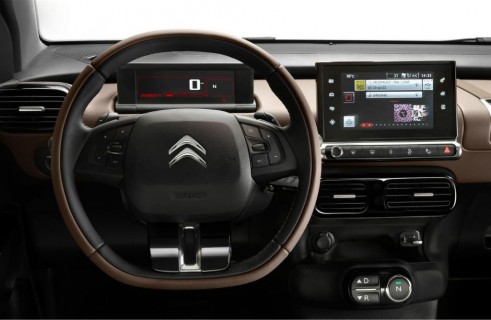 Inside, the C4 Cactus just gets better! A low slung dashboard is mounted with a large 7 inch infotainment screen. Another monotone screen sits behind the steering wheel showing your speed, gear and fuel, but a rev counter is left wanting.

The whole interior is very minimalist, all the conventional functions are replaced by the touchscreen unit so there is no clutter further down in the cabin. The only slight moan we would have is the cheap looking lower plastic trim, but at this price point it really doesn’t matter when you take into account the rest of the car. 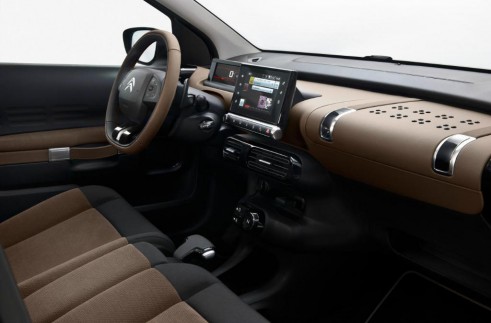 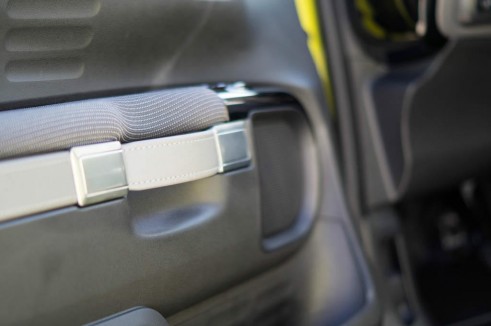 Citroen have gone with a luggage type theme inside the Cactus, the door handles and dashboard look like they are taken from a suitcase, it’s different but works very well…now if only they made a matching luggage set.

Up above you will find a large glass sunroof (optional), this is laser welded to the body and is treated to filter out UV rays, it provides the same protection as UVB4 sunglasses. This also helps to stop heat transferring into the cabin meaning you don’t need a roof blind. 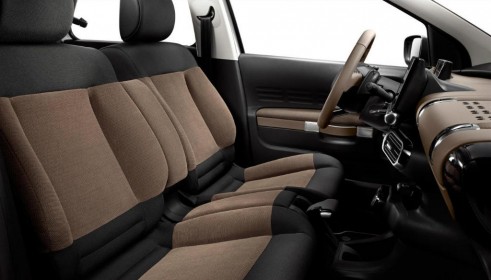 Other cool features include the passenger airbag fitted in the roof, this allows the cactus to have a very low dashboard. Next is the new Smart Wash system that has nozzles built into the tips of the wipers enabling you to wash the windscreen without effecting visibility. On the ETG6 auto the conventional console mounted gear leaver is replaced by 3 buttons, D, R and N to keep it nice and simple.

Rear seat legroom is very good for an average adult, headroom would be a little on the cramped side if you are nearer 6 foot though.

Boot capacity is excellent at 358 litres, easily enough for a couple of suitcases. 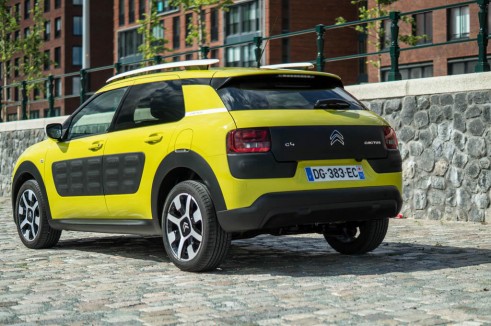 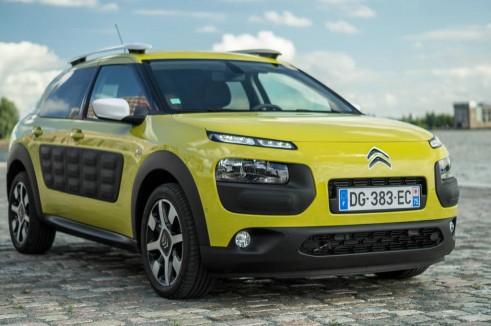 Citroen have really pushed the bar in terms of design and technology with the C4 Cactus, not only has it got head turning looks but the interior makes the old C4 hatch look very dated. All of this comes at a very affordable price. I’m sure they will sell by the boat load as buyers want modern, futuristic looking vehicles, Citroen have done this and made it very attainable.

The PureTech 110 would be our choice; with the manual you miss out on the bench style front seats, but it easily has enough grunt to make it an enjoyable drive. 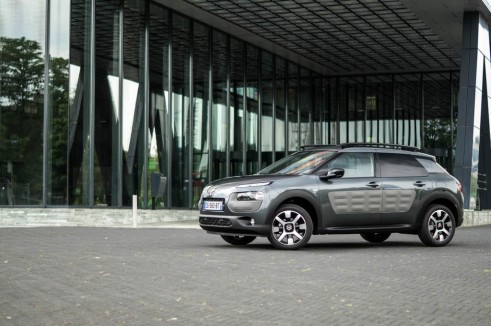 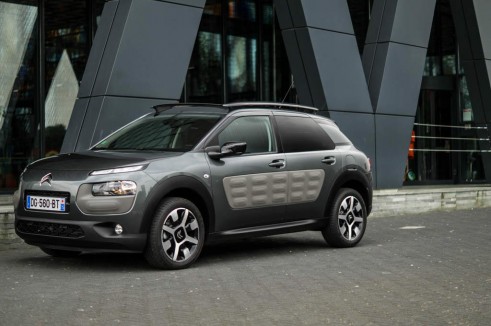 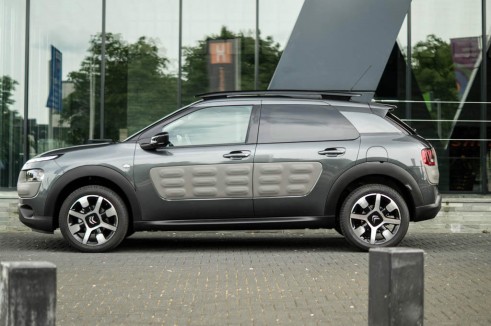 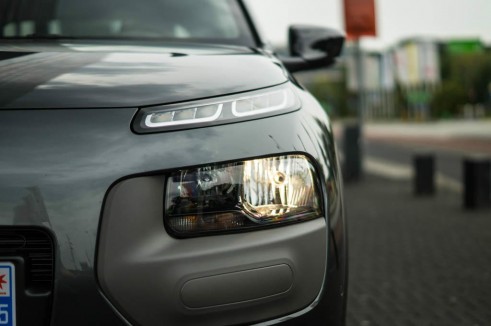 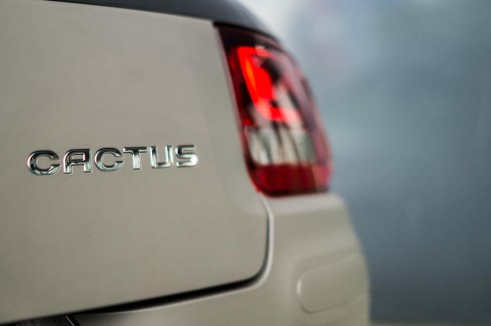 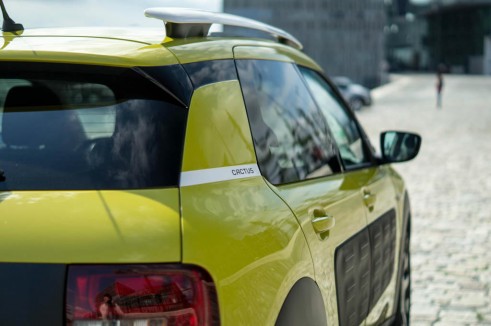