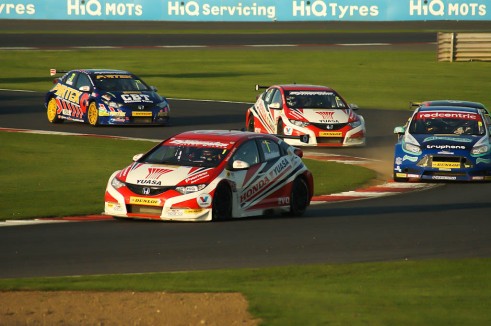 The BTCC made the short hop from Rockingham to Silverstone for the penultimate round of the 2013 championship. Series leader Andrew Jordan would be looking to build an advantage ahead of the final round in a fortnights time, but would have his work cut out following a difficult qualifying session for the Honda squads.

In fact Matt Neal would be the fastest of the Honda’s starting from 9th, ahead of title rival Jordan. At the front it would be the triple 8 MGs that locked out the front row after qualifying, Jason Plato taking the pole from team-mate Sam Tordoff by a gap that measured the equivalent of 4mm on the track! The Speedworks Toyota of Dave Newsham found himself an excellent 3rd, ahead of the BMW of eBay Racing’s Colin Turkington, who would be looking to close the gap on Jordan in the chase for the championship. Frank Wrathall’s Dynojet Toyota was next up, with Jack Goff in the Team Hard Vauxhall Insignia next, Adam Morgan’s Ciceley Toyota and Rob Collard’s BMW filled the gaps before the Honda’s.
Two other points of interest Matt Neal would be racing with an injured finger, while Dan Welch’s Proton was equipped with a specially modified seat as he raced with a fractured pelvis and coccyx following his accident in race 1 at Rockingham.

Lights out and we’re off, both MGs get a good start, Plato wide at copse but rejoins. Ahead Turkington is fighting for second, but Tordoff regains the place, Newsham sideways at Brooklands but its worse at woodcote…Will Bratt’s Audi collides with the BMW of Nick Foster and Andy Neate’s Chevrolet, net result is Foster and Neate in the gravel with Bratt in the wall, but he continues (with his bonnet up again) and a safety car interlude. 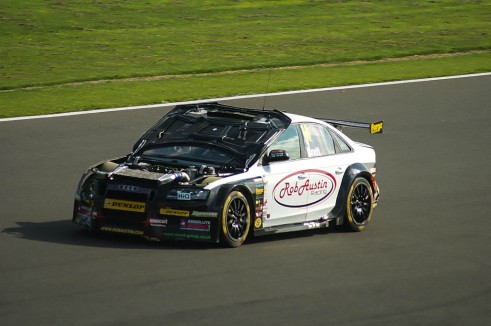 The order is Plato, Tordoff, Turkington, Collard (on the soft tyre) Wrathall, Neal, Jordan, the Airwaves Focuses of Aron Smith and Matt Jackson and Adam Morgan. 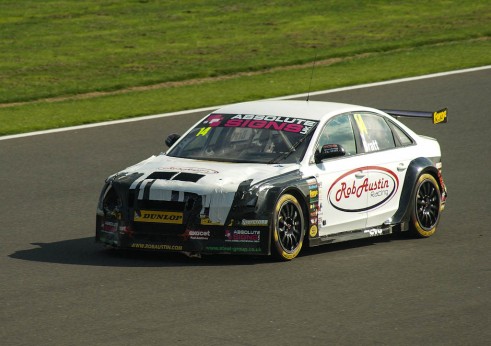 Lap 8 and racing resumes! Wrathall attacks Collard for 4th while Neal closes up to the pair of them, but at the front Plato and Tordoff are pulling away. Lap 9 and Neal passes Wrathall for 5th, Jordan tries the same move but the Toyota holds the place as they race down the Wellington Straight. Jordan does get the pass made at Copse on lap 10, Aron Smith following while Morgan, Goff and the recovering Newsham all catch up to the back of the orange Toyota.

Lap 12 and Goff pits with damage to the front end, his race is over. Back on track Neal passes Collard for 4th and sets about chasing Turkington for 3rd. Jordan is trying to pass the BMW but the weight the Civic is carrying is hurting the championship leaders challenge. Neal now passes Turkington for 3rd, Collard also fancies his chances against his team-mate but the former champion holds on, Jordan can’t seem to do anything about BMWs!

Lap 21 – things have calmed down a little at the front. With the on track action focussing on the lower end of the points, as Rob Austin – (not having the sort of weekend he’s been used to in recent outings) battles with Shedden (also having a weekend to forget) for 13th place. Just ahead Welch and Wrathall battle side by side through the final part of the lap, slight contact at Copse sees the Proton driver forced to give way and drops back behind the Honda and Audi drivers.

At the front though Plato takes an easy victory from Tordoff, Neal finishes 3rd – just, by .008 of a second from Turkington. Collard in 5th and Jordan 6th, more importantly ballast free for the next round. 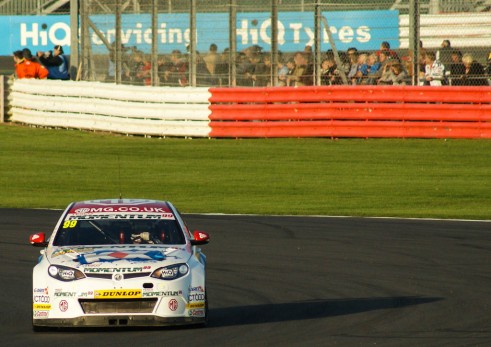 Ollie Jackson in the second Speedworks Toyota and Jeff Smith in the Pirtek Civic produced the final on track action from race 1 as they went side by side through the last part if the lap for 18th and 19th places, the Honda driver winning that particular encounter.

The grid lined up as they finished race 1, with the MGs on the front row – Neal and Turkington just behind. The big news however was that championship leader Andrew Jordan with no ballast and on the soft tyre, as was Gordon Shedden. Jeff Smith was absent as he was unwell.

Green flag lap and Collard appeared to be slow on the final approach to the grid, the BMW taking his time leading the rest back to the grid.

Lights off and we are racing, another good start from Plato, but this time Turkington is through to second – not for long though as Tordoff gets back through at Maggotts, big crash behind Wrathall! Austin, Onslow-Cole and Neate are all involved, safety car deployed.

Collard pits under the safety car, green flag lap gremlins? He rejoins a lap down, but retires the car halfway around the lap. Behind the safety car the order is Plato, Turkington (who did get the place from Tordoff before the safety car intervention) Neal, Jordan, Morgan, Jackson, Aron Smith, Shedden and Newsham finish the top ten. 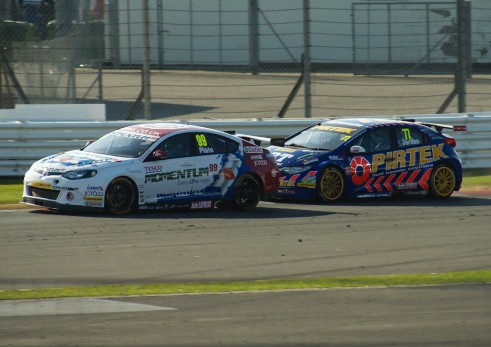 Lap 7 and we’re racing again, almost straight away Jordan passes Neal for 4th, while just behind the two Airwaves Focuses attack the Toyota of Adam Morgan while Shedden catches the battle on the next lap. Jordan – free of Neal is catching Tordoff who in turn is catching Turkington. Morgan is being shuffled back and gently nudges the back of Shedden as the Scotsman passes.

Up front Tordoff passes the BMW of Turkington, Jordan follows and passes the BMW a few corners later. Morgan and Shedden are dropping back into the Jack Goff, Howard Fuller, Dan Welch battle – people these guys are not used to racing against! Further forward Aron smith is ahead of Matt Neal for 5th and Jordan is ahead of Tordoff for 2nd and catching leader Jason Plato (remember him). 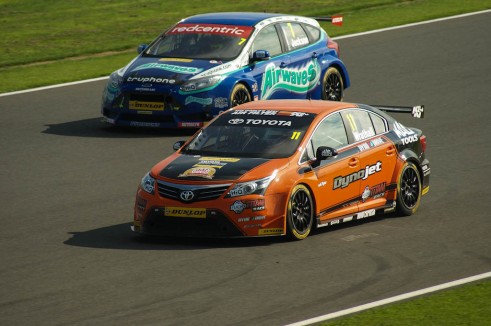 Lap 12 (half way!) and Morgan pulls into the pits to retire. Smith is all over the back of the BMW of Turkington and makes the pass at Copse, also at Copse Howard Fuller has a big big slide in his Insignia. Now Smith is chasing MG man Tordoff for third and the final podium spot. Tordoff and Smith are side by side into Maggotts, Smith cuts back as Tordoff tries to hold on, side by side down Wellington Straight…Smith has the inside line for the next corner at Brooklands, Turkington is re-catching the pair as the pass is completed by the Ford driver. Just ahead Jordan is catching Plato for the lead, there could be a twist at the end of this race yet! 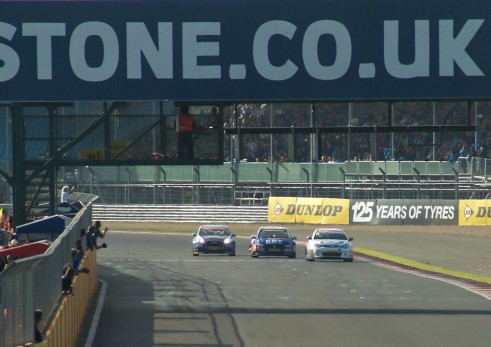 Lap 20 – Plato and Jordan are side by side through the final part of the lap, Jordan gets his nose ahead but the slightest of contact gives Plato back the lead, rear body work now rubbing on the tyre of the Civic! Aron Smith is catching the pair of them, Plato is holding the two of them up as the lead pair turns into a lead trio. Plato is driving defensively, Smith is looking for more than third and Jordan must be thinking about the championship, calls for the organisers to hide the chequered flag are lost and Plato wins for the 80th time of his career from Jordan and Smith – less than half a second cover the first 3! Tordoff, Turkington, Neal and Shedden are next up with Newsham, Welch and Matt Jackson completing the top 10.

Jordan now leads Neal and Turkington by 38 points, Shedden now trails by 45 and Plato by 47.

Race 3 and the reverse grid would be particularly kind to Matt Neal who would start from pole with Colin Turkington alongside. Tordoff and Smith line up on row two, with Jordan and Plato making up the third line. Rows four back will be as per race 2 finish, with Shedden and Newsham ahead of Welch and Jackson. The bulk of the front runners will be wearing the soft compound tyres, and the 2 drivers tied for 2nd on the front row for race three should be something special. 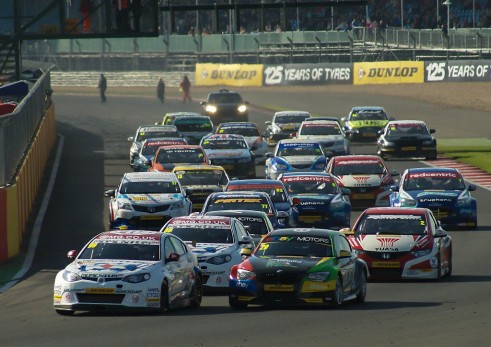 Lights out and race 3 is under way and a great start from Turkington, who leads from Neal, Tordoff and Smith while Shedden, Plato and Jordan fight for 5th, for the first time this weekend we have a clean first lap! This wouldn’t last long as Neal gets in to a big slide at Brooklands, leaving an MG sized gap which Tordoff looks to exploit, the MG goes for the gap and tries to drive around the outside of the Honda through Luffield and Woodcote, Neal thought better of this and tagged the back of the MG pitching Tordoff into a spin across the grass, which the former Porsche pilot controlled beautifully. Just behind Will Bratt has another off in his Audi – it’s not been a good day for the Rob Austin Racing boys. Back up front and Smith has passed Shedden for 2nd while Neal is holding up a train of cars from Jordan in 5th right back to Rob Collard in 13th! Ahead, Shedden reclaims 2nd from Smith and sets off after the BMW of Turkington, will there be yet another twist in the final BTCC chapter of the day? 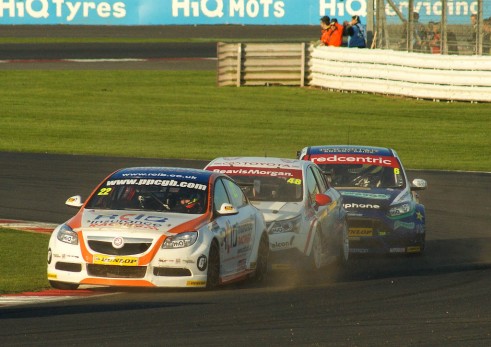 Safety car! There it is, debris on the circuit leads to the deployment of the safety car, everyone takes a deep breath and prepares for the restart. Turkington gets a bad restart and Shedden takes the lead with Smith following past the BMW, Turkington is dropping back as Neal and Jordan sense their chances of valuable championship points. Jackson, not fighting for the championship however cares not for the title challengers and passes Jordan for 5th and sets about the 2 former champions in front of him. Neal however is giving all his attention to Turkington and makes a pass on the BMW which Jackson tries to follow, Turkington regains the spot ahead of the Ford man.

As we enter the closing laps Shedden has a 2 second lead on Smith, with Neal 3rd, Turkington and Jackson are still battling for 4th and 5th. Penultimate lap and Turkington is off at Copse! Jackson touches the back of the BMW pitching him into a spin and damaging the rear suspension – no points for Turkington this time! As the pack weave to avoid the chaos Dave Newsham picks up a place ahead of Jason Plato for 6th.
At the front though Shedden takes victory from Smith and Neal, Jackson, Jordan, Newsham, Plato, Morgan, Goff and Welch round out the top 10. 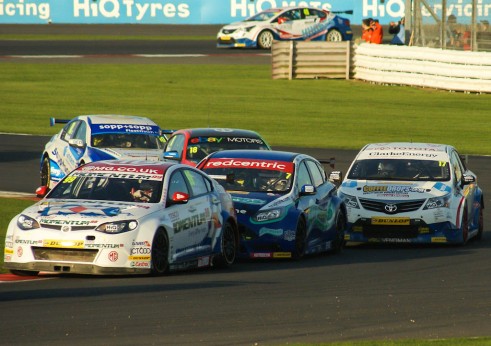 As the days racing ended Andrew Jordan would maintain his championship lead and leaves Silverstone 34 points ahead of Matt Neal, a further point ahead of Gordon Shedden, 48 ahead of Colin Turkington and 49 ahead of Jason Plato.