The BTCC headed south to the Nations fastest circuit, Thruxton for rounds 7, 8 & 9. Again it brought with it a few changes to the grid. Following Andy Neate’s Yuasa Halfords Honda departure in the run up to Donington, Eurotech Racing added a third car to their ranks for former Porsche Carrera Cup racer and former BTCC entrant Daniel Lloyd. 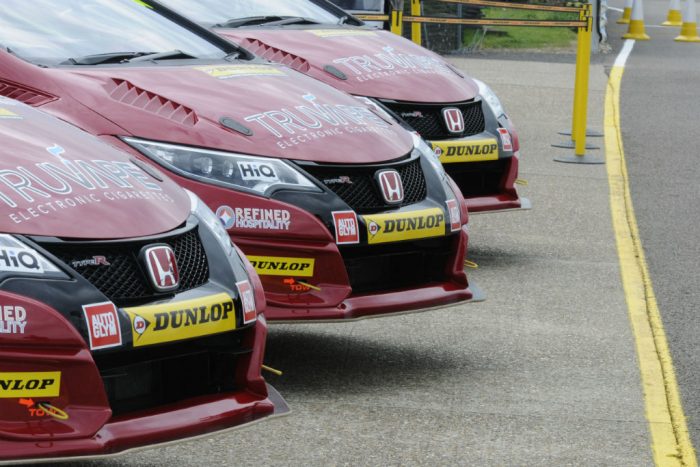 This wasn’t the only adjustment to the grid however, following James Cole’s fiery exit from the Donington event and the (much) hotter than normal climate at Thruxton, Subaru, opted not to run their cars fearing a repeat of the Donny inferno after the cause had been traced to parts in the fuelling systems. Suitable replacements are expected for Oulton Park next month. 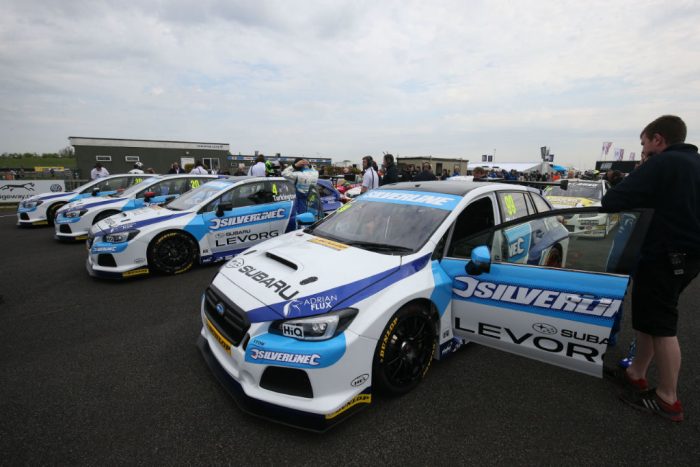 Qualifying saw a number of times cut as the dreaded track limits saw several drivers having to re set their times in order to take the grid for Sunday.

Tom Ingram in the Speedworks, Toyota Avensis eventually scoring the pole ahead of Laser Tools Racing’s Aiden Moffat having a great start to the ’16 season in his Ciceley prepped Mercedes A class. Matt Neals, Yuasa Halfords Civic Type R was next ahead of the RCIB Insurance Racing MG duo of Josh Cook and Ash Sutton in their MG6s ahead of Adam Morgan’s Wix Racing A Class Mercedes. Adam Morgan took victory for the 7th round of the 2016 season and, in doing so became the first double winner in the BTCC this term. The Brands Hatch race 3 victor taking his second successive Thruxton win having scored the victory 1 year prvious in race 3, however a lot had to go on before he would take the – in this case – red flag.

The ballast heavy Honda of Neal had initially gained the lead from Ingram after a drag race down to the complex, Moffat who was also in the mix was the looser and, following slight contact dropped slightly down the order.

Morgan battled hard to pass the MGs, Ingram et al and set upon Neal’s Civic, stuggling under the weight and, led from the start of the 4th lap from “team mate” Moffat, Neal and the rest. Moffatt however would have his second dose of bad luck becoming the founding member of puncture club on lap 10 and, was joined a lap later by Mat Jackson, wrestling his Motorbase Focus up the order from the mid pack and the BKR run VW CC of Mark Howard. 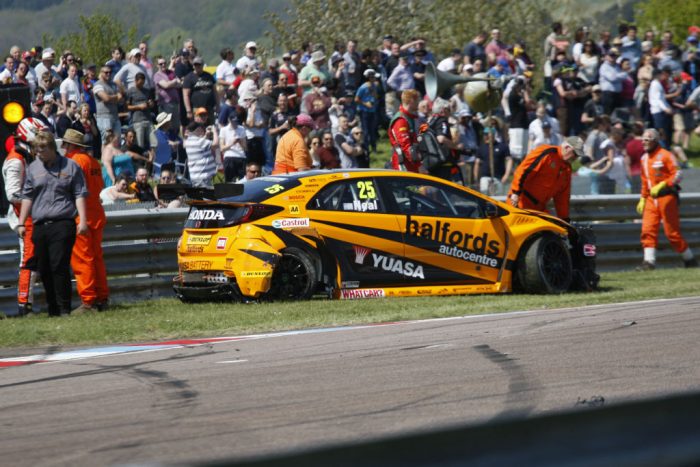 It was the following lap though that big one landed, Neal became the 4th member entering the chicane and, as a result had to cut through the centre, on rejoining he was unable to get across the track and was collected by Cook in the MG – flinging the latter onto two wheels and in the process collecting several other cars including Neal’s Yuasa Halfords Honda team mate, Shedden. 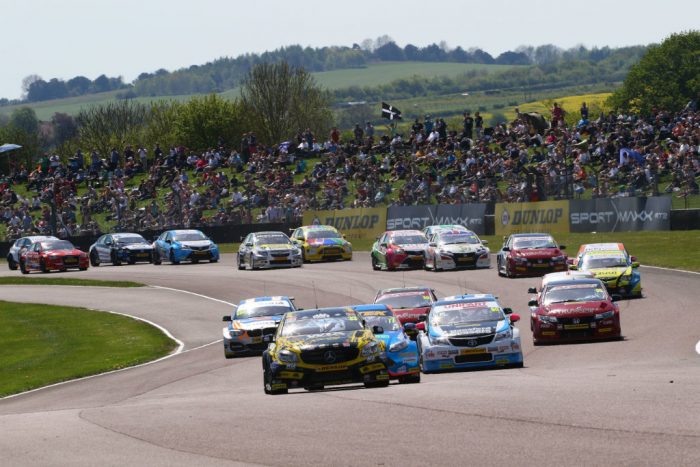 Several cars littered the startline area and, quite sensibly the race was red flagged as a result. Morgan taking victory from Ingram, Jordan, the Eurotech pair of Smith and Depper, the BMWs of Rob Collard, Sam Tordoff and Jack Goff, Dan Welch in an excellent 9th in his Goodstone Proton and Jake Hill’s Team Hard RCIB Racing Toyota Avensis landing tenth.

As a result of the tyre dramas that marred the days first encounter the organisers chose to shorten the two remaining races from 16 to 12 laps.

Morgan led away from the pack, his A Class now holding the maximum weight as Jordan and the WSR BMW trio stalked him for the duration, at first it looked like Morgan may hold on for his second win of the day before Jordan nipped by with a lap to go to score his first victory since 2015 and become the 7th winner in 8 events thus far. 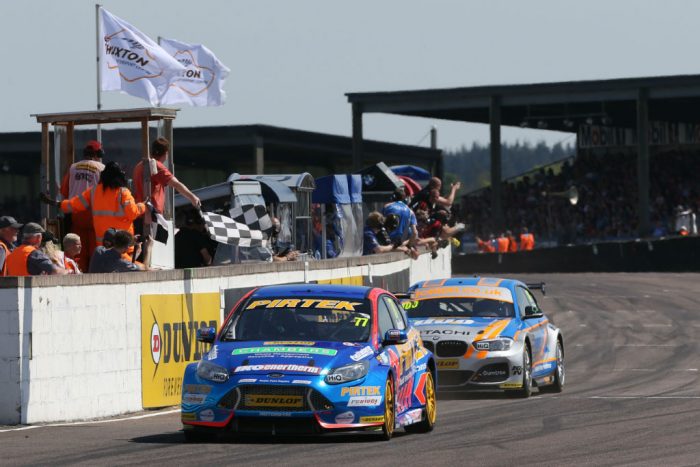 Collard, at his local track took third from the recovering Shedden who started down in 23rd following the race 1 carnage ahead of Goff and Tordoff while Dan Lloyd took excellent points for Eurotech Honda ahead of Mat Jackson, Dan Welch and Rob Austin. 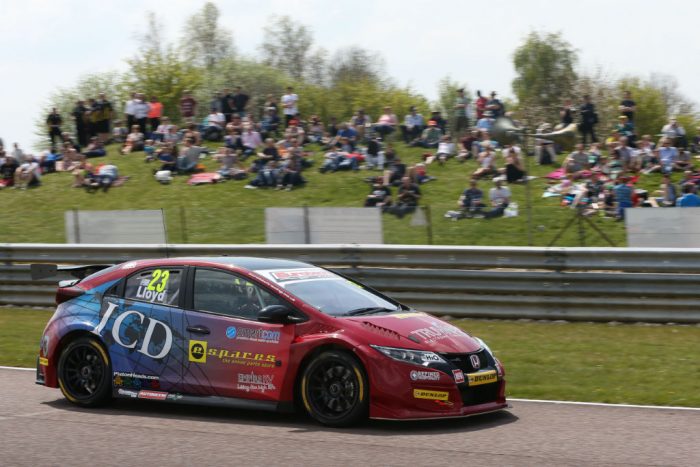 Dan who is also local to Thruxton was enjoying his best weekend in a long time and, it got better when he was promoted to the front of the grid for the day’s final encounter.

Dan Welch may have started from the pole but it was Mat Jackson who got the jump at the first corner, taking the lead to score a relativity untroubled victory for Motorbase, their second of the day. Again though it was all happening behind. Welch proved for a while that he wasn’t being intimidated by the chasing pack holding second until his Proton left the track on the 5th lap. 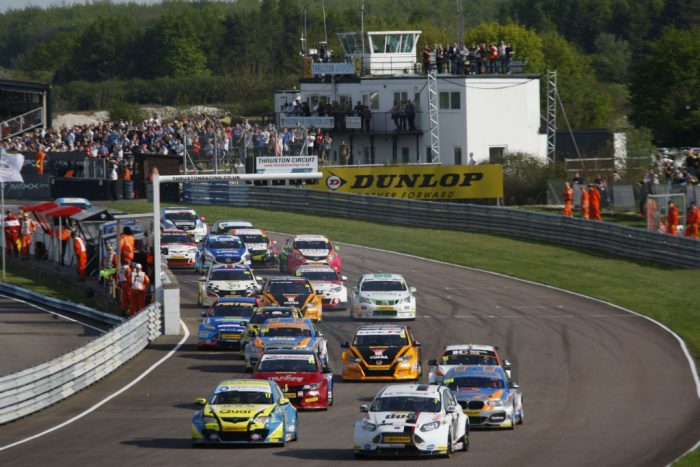 Behind Jackson the Honda duo fought with the BMWs for the podium honors with Neal eventually coming out 2nd and salvaging something (and joint championship lead) from an otherwise indifferent day for the team in orange, Shedden was again getting caught up in incidents after Goff locked up at the chicane and collected the two time champ in the closing stages, Shedden was out Goff, although finished scored no points. 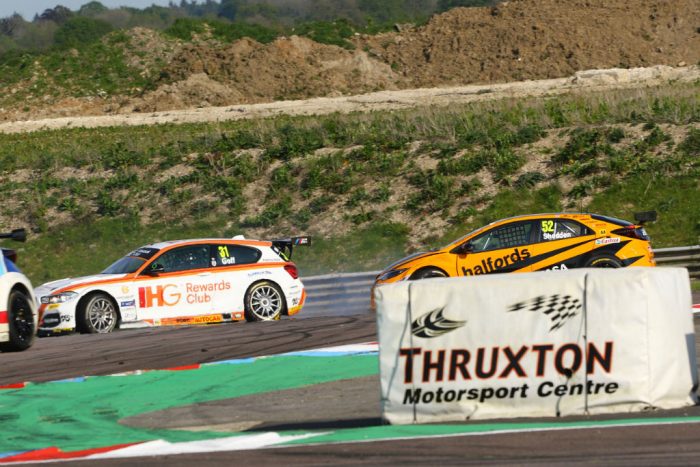 Morgan who had been behind all this landed third place and with it his third podium of the day ahead of the MGs of Cook and Sutton, Collard, Austin, Tordoff, Lloyd and Michael Epps taking his first and Team Hard’s second top ten finish of the day. 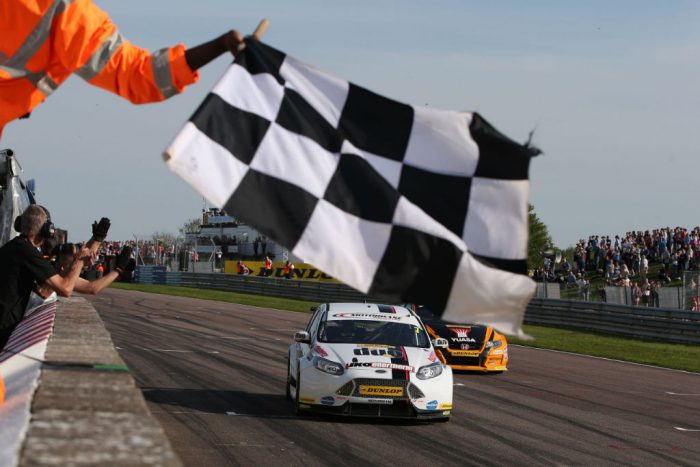 Neal and Collard lead the championship with 101 points each just 3 ahead of Adam Morgan and a further 8 up on Mat Jackson. 2016 is going to be a close run thing.