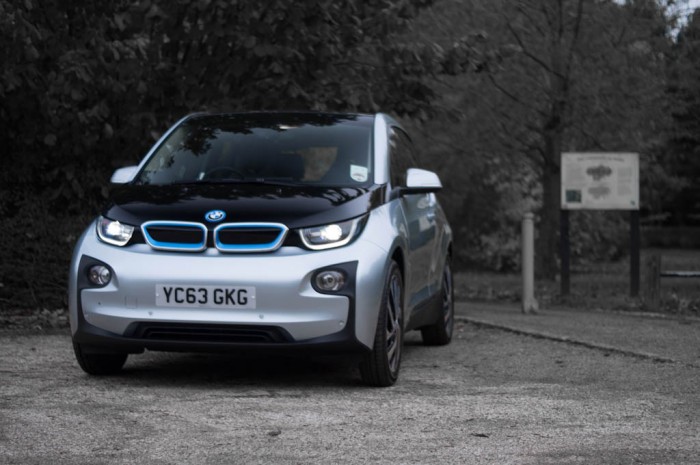 BMW first showed off the i3 concept back in 2011 at the Frankfurt Motor Show, it was at an advanced stage but looked nothing like any BMW had done before. Low and behold it’s now available to order and sitting in showrooms.

Our test car was kitted out with just under £6k of extras, bringing the final price up to £35,945.

However, there is now a company that will give you 10,000 miles of fuel (electricity) in with the cost of your new car, check them out at fuelincluded.com. 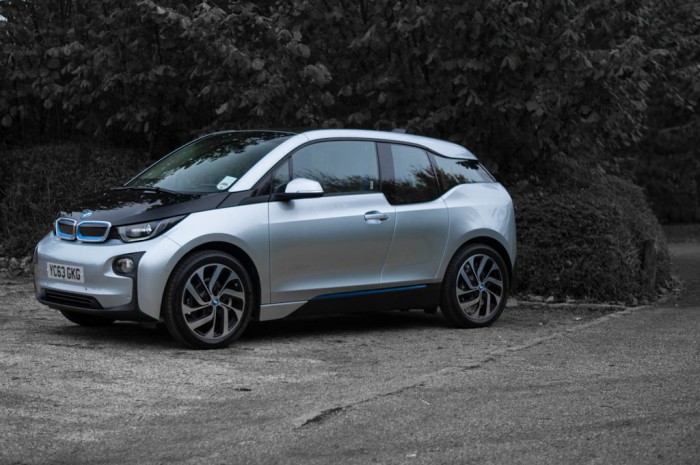 The i3 is one of those special cars, it has come from design to concept, to production with barely any changes. It looks stunning, fresh, modern a new phase in BMW’s somewhat staid and generic design house.

Up front the tell-tale kidney grille floats over the lip of the bonnet, inner edges coloured by the bright turquoise blue hue that signifies BMW’s I range. A gloss black bonnet contrasts with the lower sections, our car was coloured in Ionic silver, but the real stunner was sitting in the showroom, a Capparis White model – it looks superb with the black bonnet and hatch! 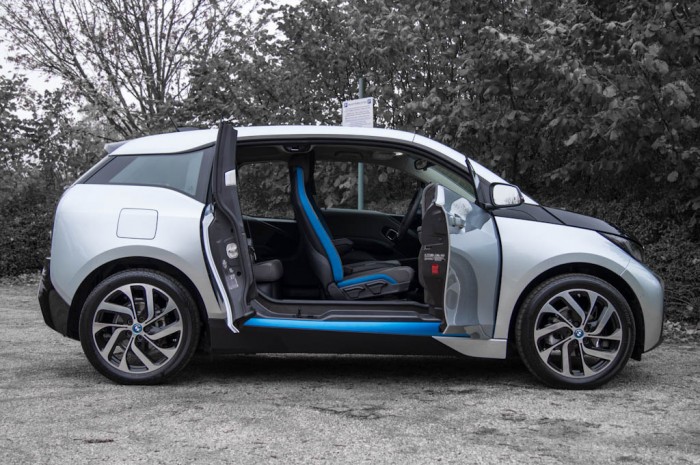 Along the side of the i3 you only see one door handle, the back doors have an internal one and are rear hinged – suicide style.

At the back an all glass hatch encapsulated the rear lights, gloss black trim surrounds the lower half of the car, in the middle the body colour comes back through – housing the fog lights and number plate.

Some could say the design is a little fussy and over complicated, but it looks as though it has jumped straight off of the designers sketchpad, its brave, bold and modern. For those reasons alone I love it. 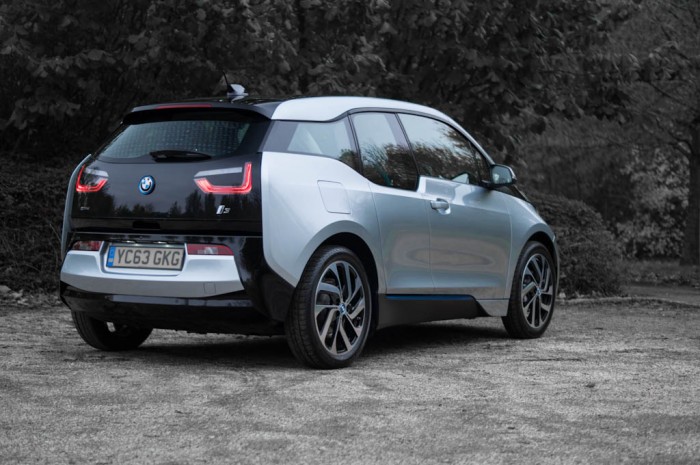 Gone are the days of slow electric cars, this thing flies. Push your foot to the floor and you out accelerate pretty much everything from a standing start. It’s great for ‘optimising’ gaps in traffic at junctions or roundabouts.

Under hard acceleration you can get some wheel spin on damp roads due to all that torque, but the ESP cuts in and sorts it out straight away. 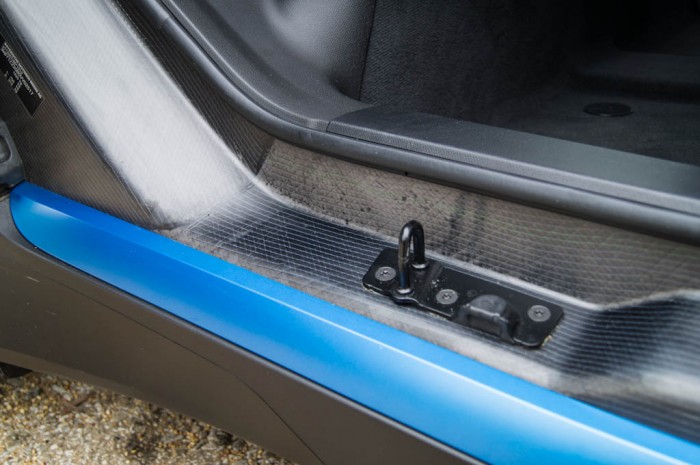 BMW have constructed the i3 largely from Carbon Fibre Reinforced Plastic, the whole passenger cell is one unit – the technology used to produce this in such high volumes at low cost has actually been patented by BMW. 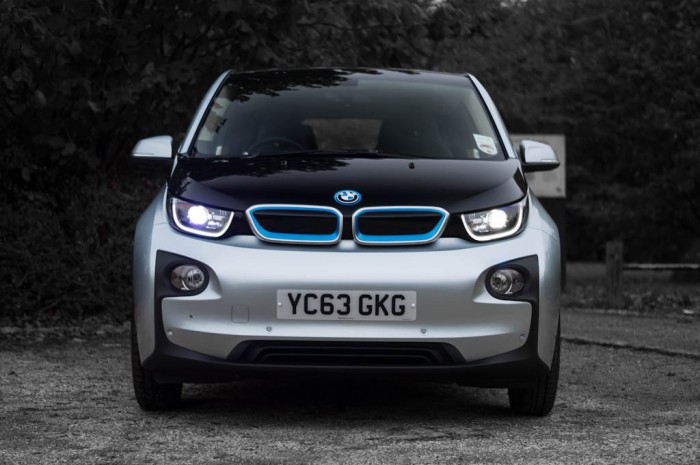 Below the main body is a separate chassis, this holds the batteries making for a very low centre of gravity. Through corners there is very little body roll, it feels nimble and darty – in part thanks to quick steering, only 2.5 turns from lock to lock. It also has a great 9.8 metre turning circle, when reversing you really notice how manoeuvrable the little i3 is.

Ride is very firm though, even on well-kept roads you feel how hardly sprung the car is. Small imperfections reverberate through the chassis and into the cabin. But this hard setup gives it a sporting feel that you don’t expect from such a car.

Power delivery is superb, no gear changes mean a seamless supply of torque. Its gearless setup makes it a dream to drive around town in stop start traffic. 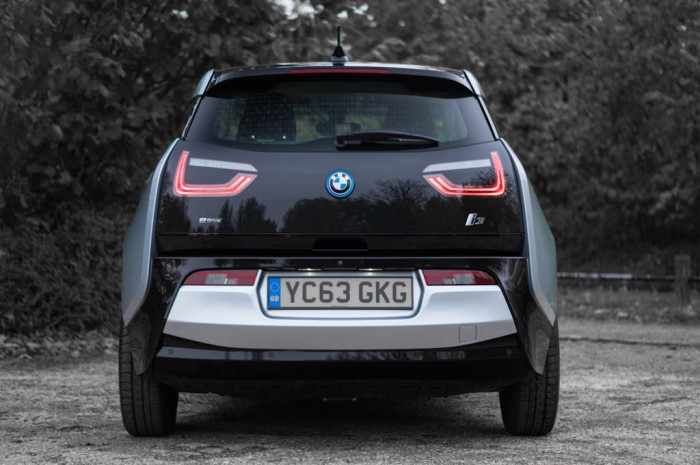 As you let off the accelerator you can feel the regenerative braking kick in, it’s more noticeable than on any car we have driven, slowing you at a considerable rate if you lift off. Most of the time you can approach a junction without even braking, it adds to the effortless driving ambiance. 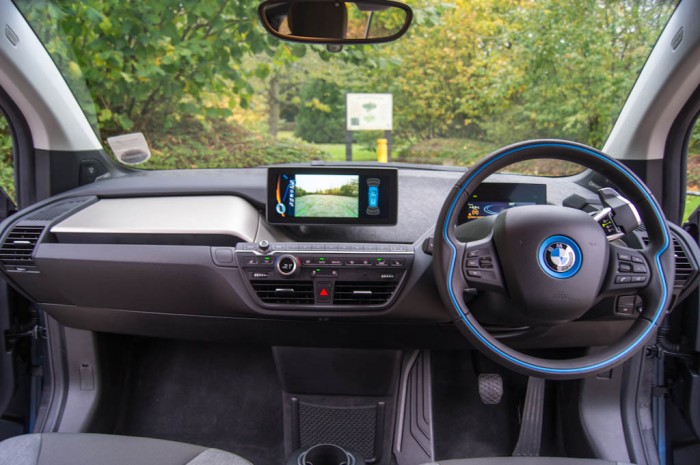 Inside is where BMW have really done the car justice. A low dash made from Kenaf fibres (a plant that grows in just 100 days) gives way to a large windscreen, giving a superb view of the road ahead from a slightly elevated driving position.

Two floating screens display all you need to know. No cluttered binnacles or dial hoods here. It makes pretty much every other car on the market today look decidedly old fash! 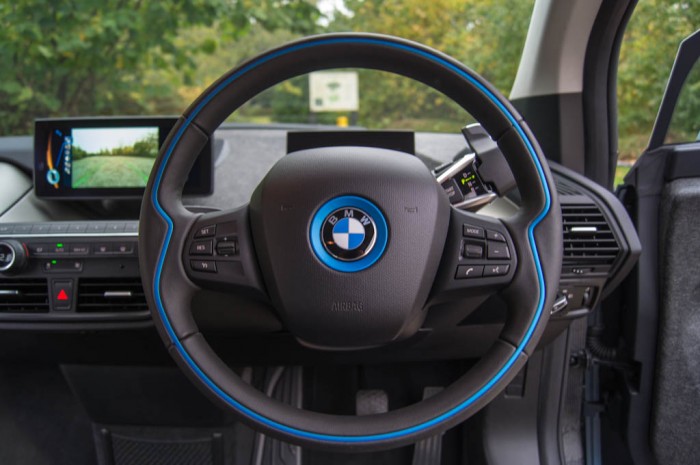 On the middle screen you will find all your infotainment needs catered for, whilst the one behind the steering wheel shows current charge and speed. Our car was fitted with the larger ‘Professional’ 10 inch Sat Nav screen, it looks the business, but is a little steep at £960.

A small array of buttons sit below the central infotainment screen, these operate the stereo and climate control. The only other controls are in the short centre tunnel between the seats, this houses the touch sensitive I-Drive jog wheel, parking brake and driving mode switch.

To change gear you have a column to the right side of the steering wheel, you turn it to select Drive, Neutral, Reverse, a stop start button is also housed on this stalk. It’s a chunky affair with some buttons being a little fiddly to get to, a more delicate solution would have been nice. 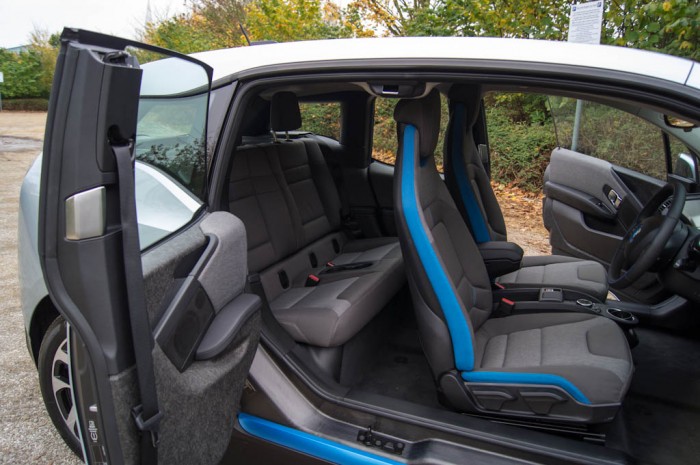 Access to the rear seats is uninhibited thanks to the absence of a B pillar, the rear doors can only be opened in conjunction with the front ones – this could be a problem for some people.

Rear seat headroom is acceptable, whilst leg room is somewhat cramped if you have a regular sized driver up front.

The front seats are very modern, built in headrests give them a sporty look. They are rather flat though, and you seem to sit on them rather than in them. Given the i3’s surprisingly sporty handling and acceleration, something a little more gripping would be good. 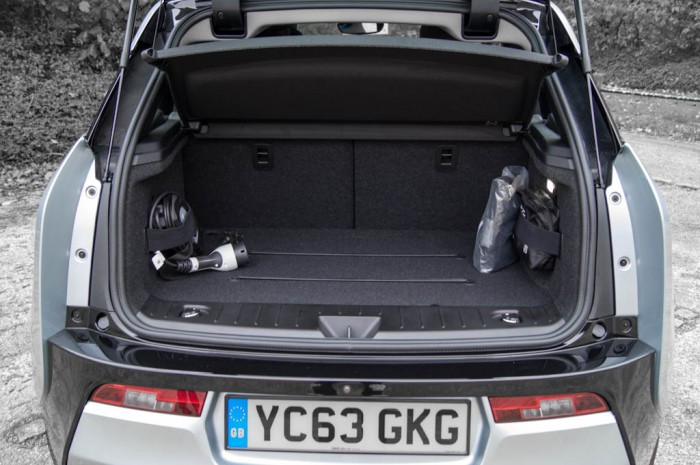 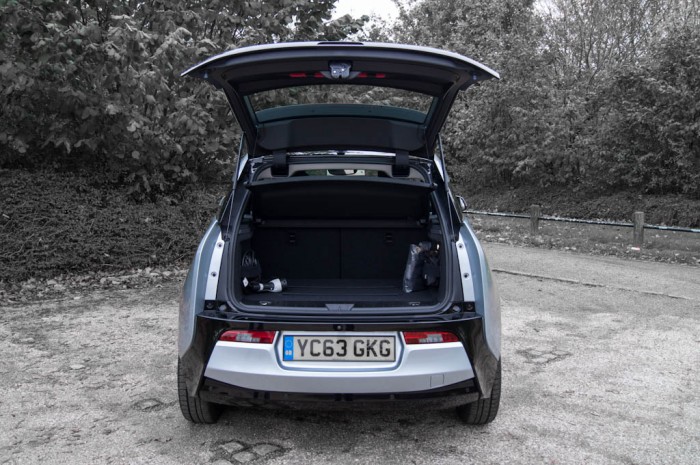 A high boot floor is completely flat with the lip, but it is limited in space with only 200 litres available. The rear seats do fold down though giving you up to 1100 litres. 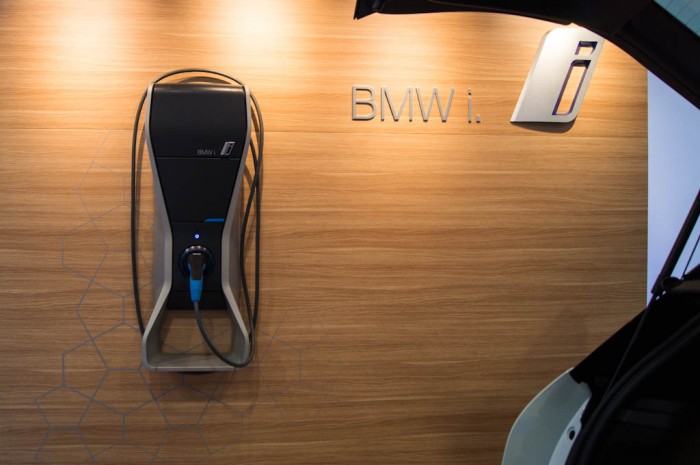 You can opt for the very svelte BMW I Wallbox Pure for home charging, at £315 (installed) it will charge the i3 from empty to 80% in just 3 hours.

Later this year DC Rapid charges will be available whilst out and about, these charge the i3 from 0 – 80% in half an hour, now that’s more like it! But to have the i3 accept DC power costs an extra £560…

Another added bonus is that BMW actually SELL YOU the batteries with the car, finally no nasty monthly battery leasing costs.

The Li-Ion batteries are warrantied for 100,000 miles and up to 8 years, very impressive for a manufacturer to back their battery tech in this way. It has also been said the batteries will last the lifetime of the vehicle.

BMW have shown that they don’t have to bring out bland looking, increasingly generic econo saloons.

The i3 shows that difference is good, and at the dealership we spoke to they have already sold 10 i3’s before it even hit the showroom floor, that’s a lot of cash to pony up for a leccy car you have never driven!

At £25,680 (after the £5k government rebate) it is pricey for what is essentially a small hatchback, but good looks and cutting edge tech have always carried a premium.

For around town the i3 would be superb, longer journeys and you may think about the range extender model. Same car, but fitted with a 2 cylinder petrol engine used to charge the batteries…it makes no sense what so ever to us – so don’t bother with the range extender, just buy a diesel hatchback! 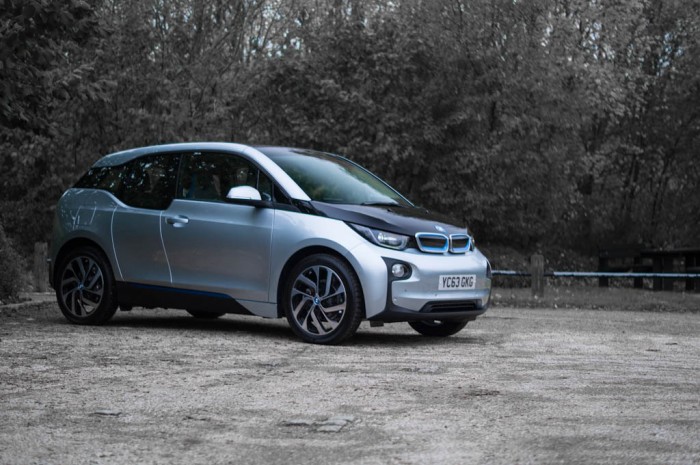 We would like to thank Lancaster BMW Milton Keynes for the loan of the BMW i3. 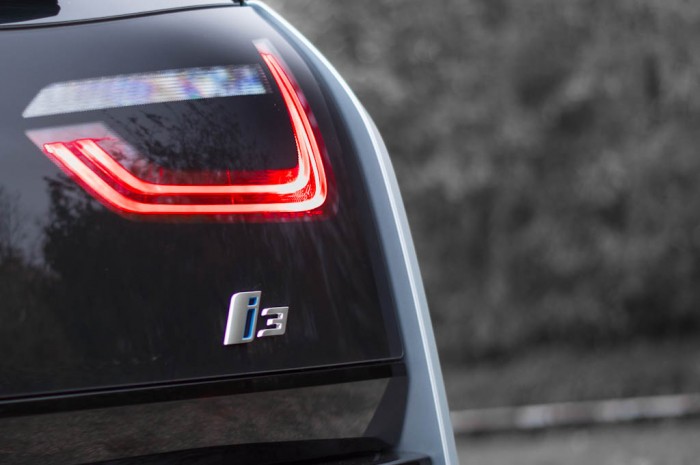