When I first received the 330e to test for a week I was pondering the purpose of a plug in hybrid. Why would you plug your car into the mains when it has a perfectly good 2 litre turbo charged petrol engine up front?!

I had thought to myself that I wouldn’t bother plugging it in at all. But the novelty factor won me over.

Plugging the fossil-fuelled beemer into the mains felt strange, but after 3 hours the thing was pretty much charged.

The next day I drove to and from work using no fuel at all. I was sold. 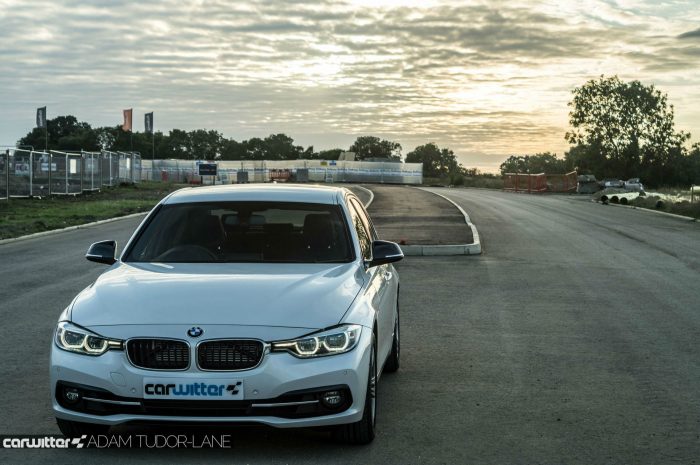 To look at, this pearly white BMW 330e looks like any other 3 series. Pretty bland. You wouldn’t notice it in a crowd, the perfect executive saloon to trounce up and down the motorways with.

It’s a smart looker, but nothing to write home about.

The only give away to its hybrid nature are the eDrive badges on each rear pillar, and the little ‘e’ monicker that follows the 330 badge at the rear. 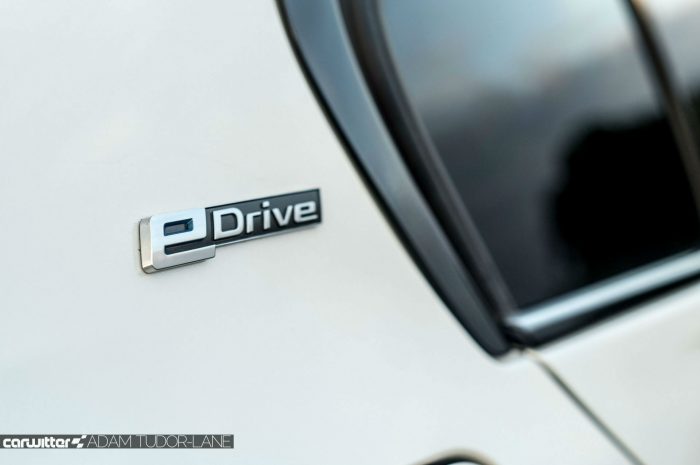 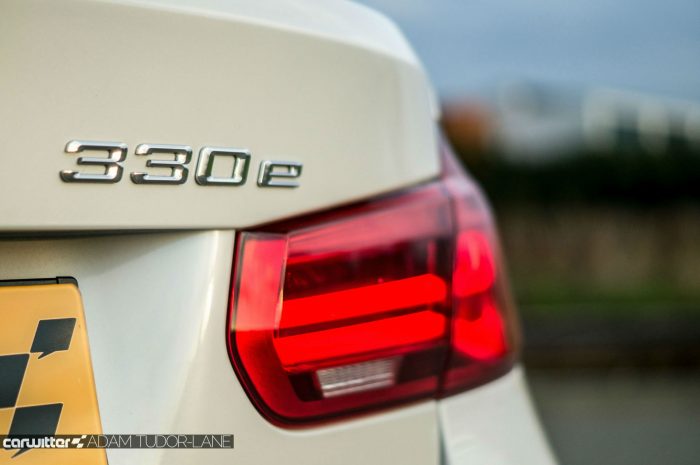 For £34,235 you get the standard BMW 330e Sport. Our test car had a whopping £6,175 thrown at it, bringing the total to a smidge over £42k. The priciest option from that list was the £945 electric front seats. The most trivial? A dark grey shade band at the top of the windscreen for £60.

The old school petrol engine up front makes 184 HP on its own, but when combined with the volts that gets boosted to 252 HP – impressive.

On electricity alone BMW states a range of up to 25 miles on a full charge. We never saw this…at a full charge the 330e read 18/19 miles range – depending on how you drive, naturally. 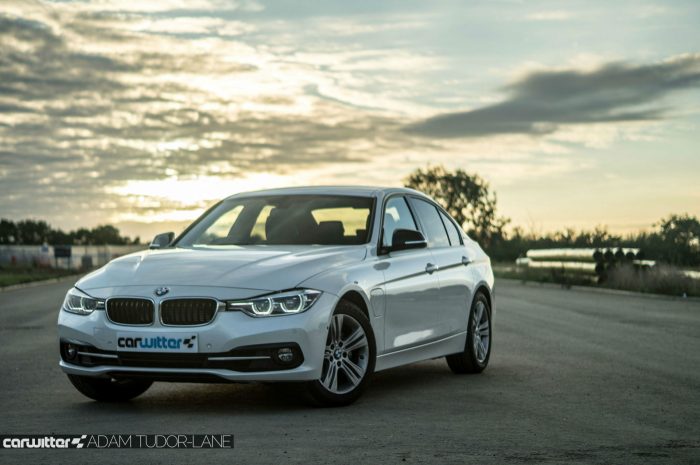 The range estimate is pretty accurate, and what’s even better is the fact that it will just use the electric motor if you so wish. Normally in a hybrid, the fossil fuel earth killing lump up front kicks into life as soon as you bury your right foot all the way to the floor. Not so in the beemer.

And due to the 87 BHP electric motor it’s no slouch. Instant torque means it picks up rapidly and can continue powering you up to around 75 MPH. From then on the petrol will take over in unison.

Switching the beemers eDrive setting to Auto enables the batteries to aid the main engine, under acceleration you get a little notification that says eBoost in the lower part of the instrument cluster.

It tails off as the speeds get higher, but it feels really punchy thanks to the combined 420 Nm of torque. 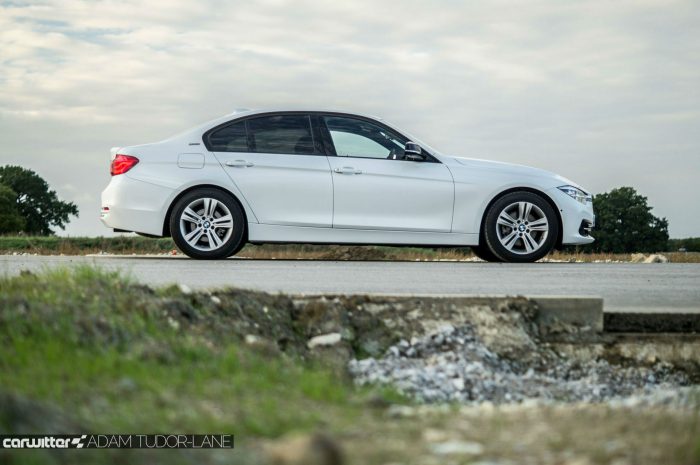 Surprisingly it feels rather sporty too, even though it weighs in at a hefty 1,735kg it disguises it well, probably due to the more rigid MSport suspension – £315 option. It does feel stiffer, you will notice imperfections in the road, but the chunky tyres do a good job to keep the worst of the UK’s scarred roads at bay.

Handling is as you would expect, sharp and spot on, giving the 330e a nimble on its feet feel about it. Knock the auto box into Sport or Manual and you can really have some fun, turn all the electronic aids off and it will burn rubber and slide around corners all day long…hybrids shouldn’t be like this, surely?! 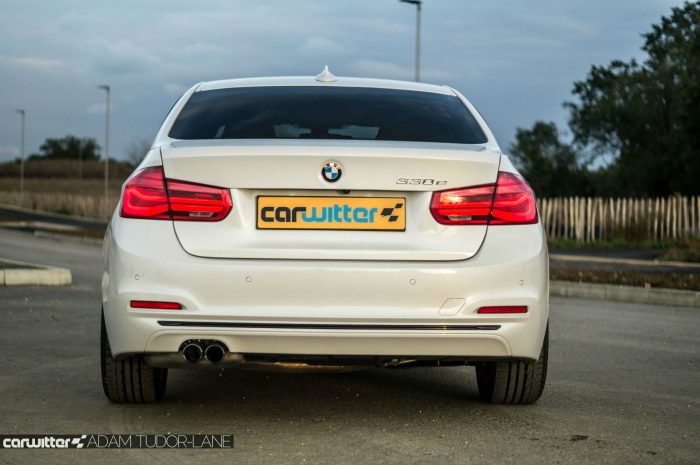 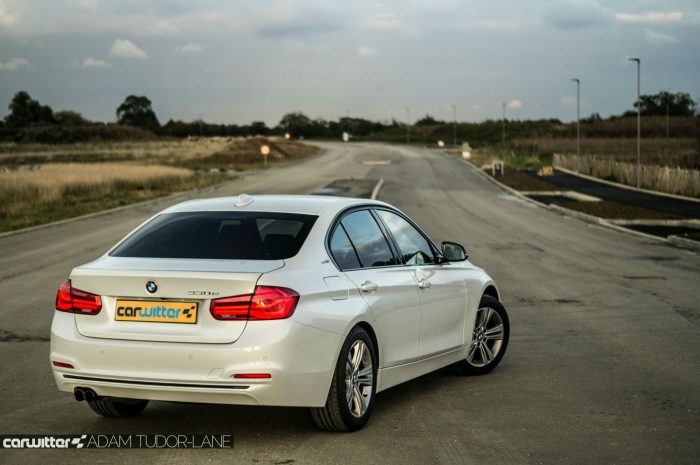 You get regenerative braking that will help charge the batteries a little, but over the course of our loan they only charged one or two bars in this manner.

Plugging the BMW in to a normal wall socket will charge the 7.6 kWh battery in a smidge over three hours. We used a fast charger which was able to fill it in around two and a half, and an average, run of the mill charger will give you 100% in roughly 3 hours.

It’s pretty rapid, and makes charging much less of a pain in the behind. But it’s wise to keep an extension lead with you for home and office top ups. 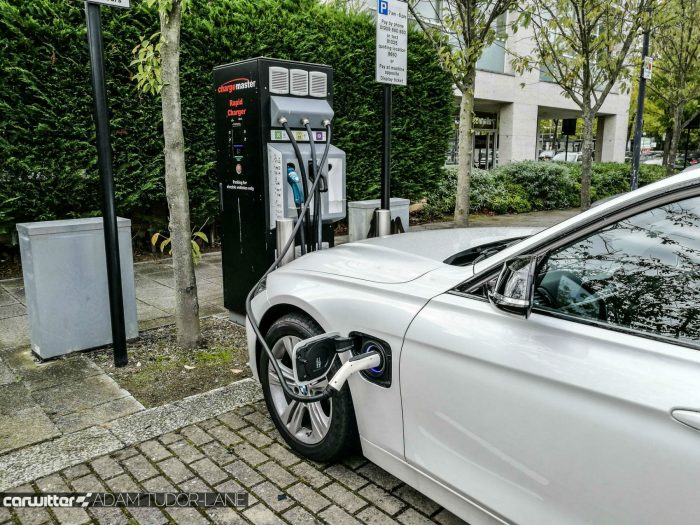 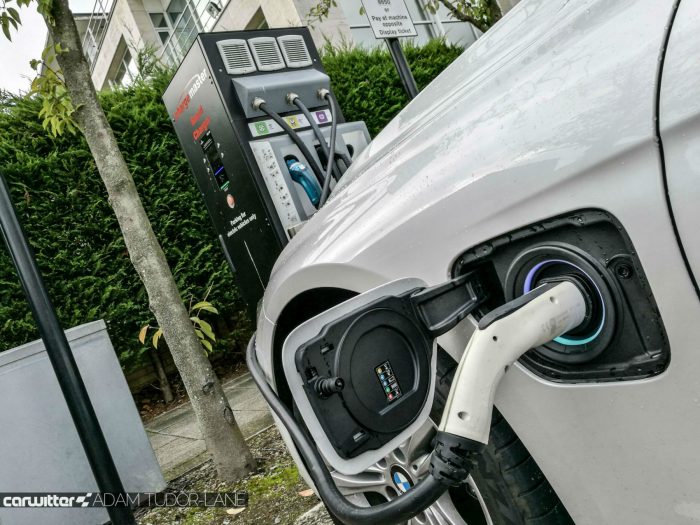 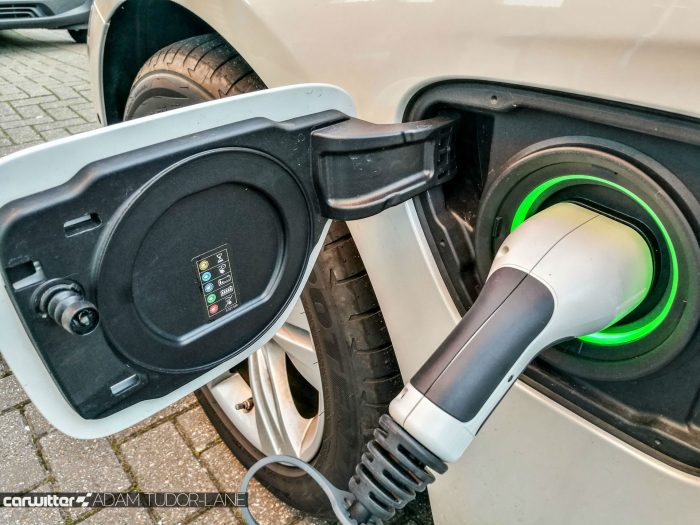 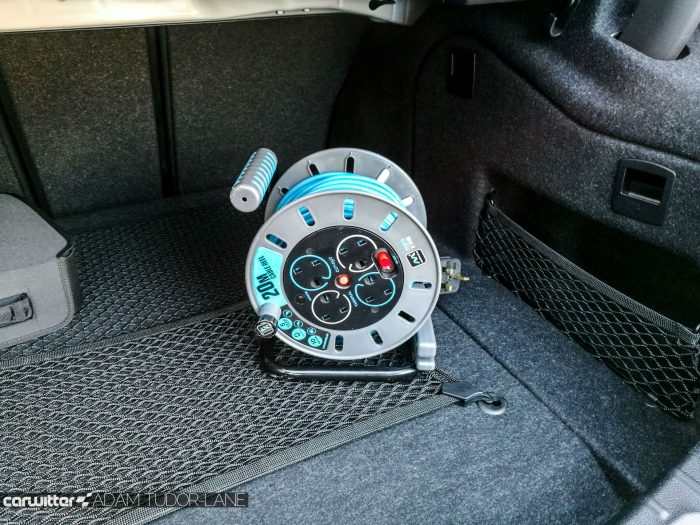 Inside isn’t much to write home about, typical Germanic blandness. A plethora of numbered buttons across the stereo make it look older than it should.

Other than that everything is very minimalist, the iDrive infotainment is nice and easy to use, it can be customised no end with split screen setup showing any sort of detail you require at a glance. 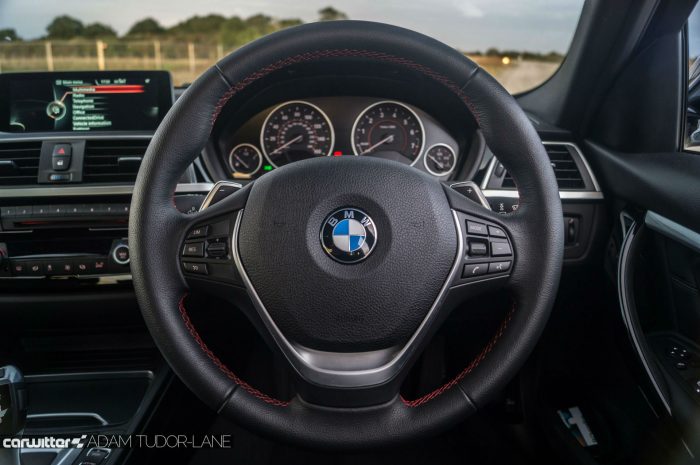 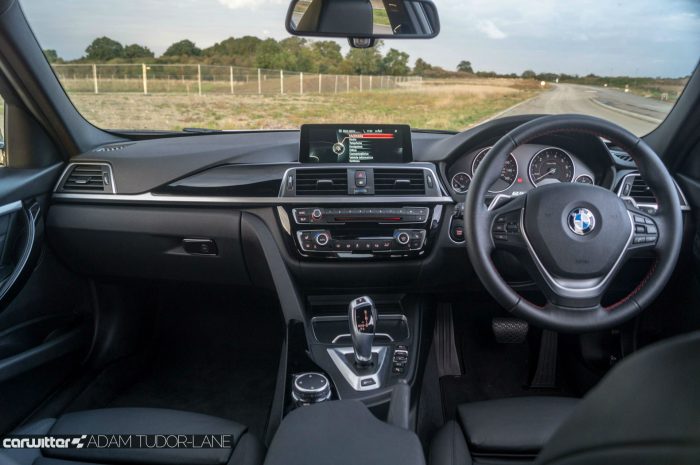 When cornering there was a fair amount of plastic creak from the central tunnel, a bit of a let-down when you certainly don’t get that on a Jaguar XE.

The stereo didn’t go anywhere near loud enough for our liking, and it would have been nice to actually have a battery percentage metre somewhere. All you get is a line drawing of a car battery with segments that vanish as the power is used.

It’s all comfy though, rear leg and head room is good, and at the very back the boot loses 90 litres thanks to those batteries. But the weight distribution has been kept to 49% front, 51% rear which is impressive. 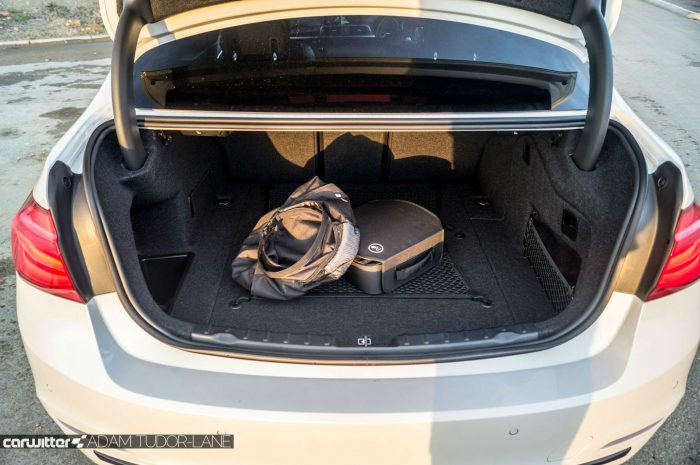 Plug in hybrid’s make total sense. It’s the best of both worlds, but it will only suit a select few.

Obviously lots will opt for it as the BIK is just 7%, but for myself – and many people that commute short distances in their local town each day – it’s perfect.
Charge it up, commute to work, commute home, all without using a drip of fuel. You could even charge it at work if your journey was a bit further afield.

Yet of a weekend when you want to go visit the family, or go away on a short break you have the petrol engine, which negates the whole range anxiety of pure electrics.

The future of motoring is plug in hybrids of this calibre. Ones that can run purely on electric juice for a set distance. Fingers crossed battery tech can get to the point where a 50 mile range pack can be fitted into a hatchback.

The government will give you £2500 towards the cost of the 330e, specced wisely it can be more affordable than you first think. 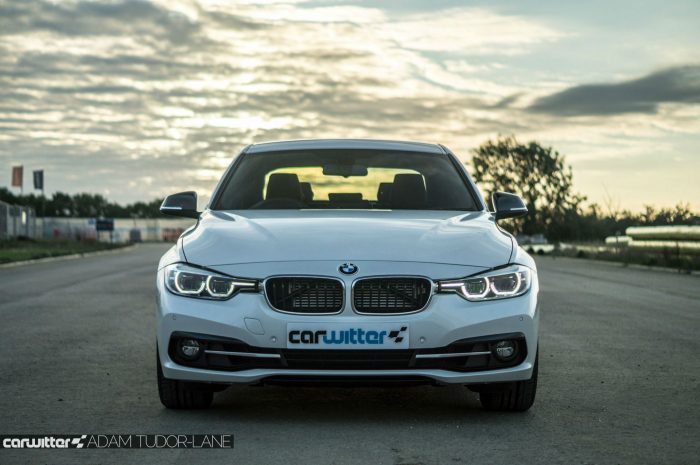 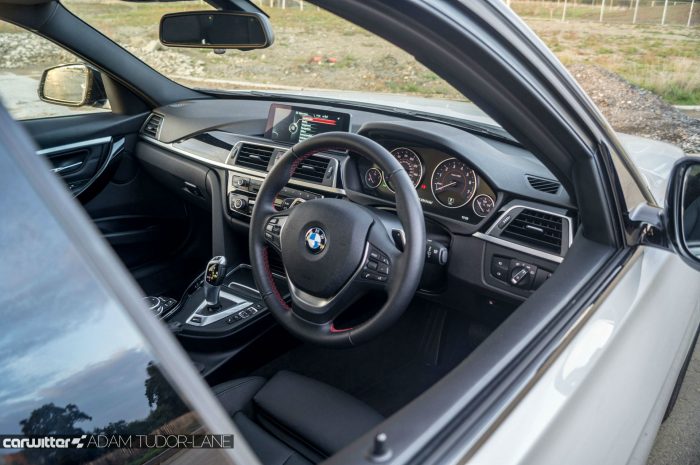 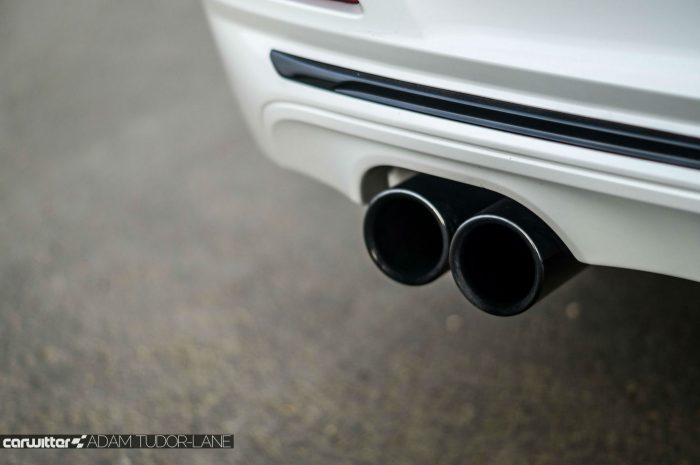 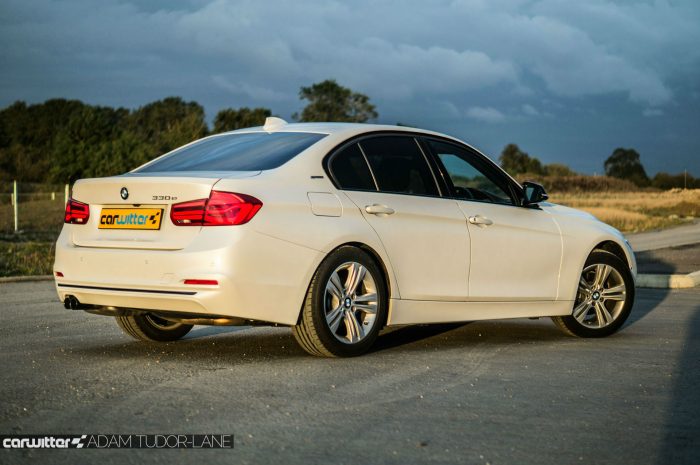 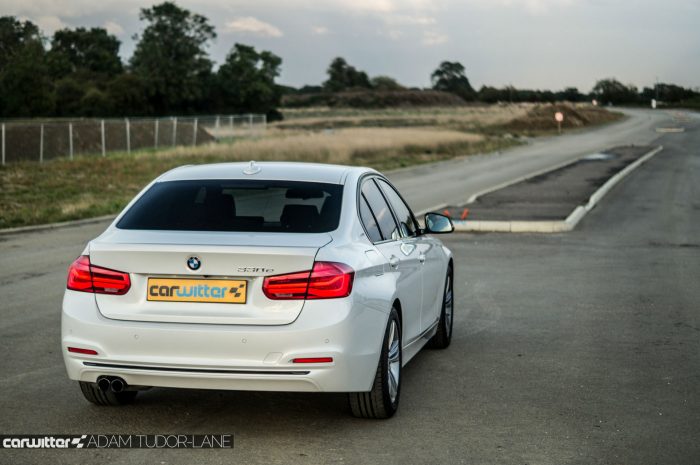