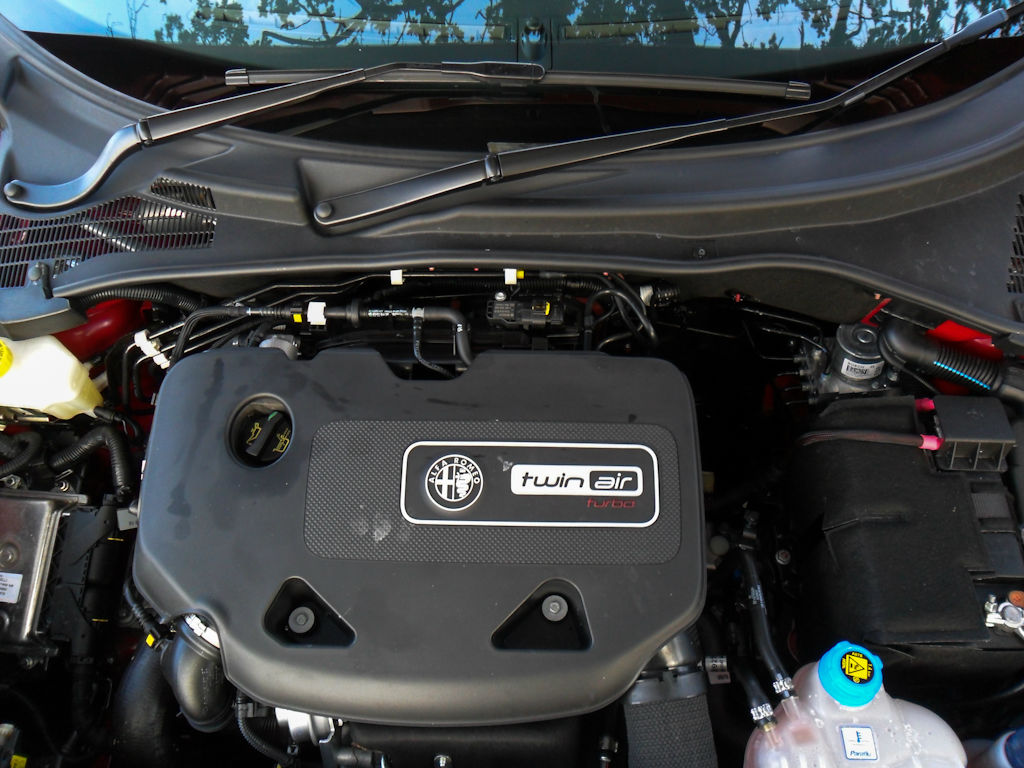 Yes two cylinders, that’s all the engine the little Alfa had. Technically, it’s half an engine. With only 875cc, the 85BHP turbo TwinAir engine costs from £14,150. This to me seems a little pricey considering you are only getting two cylinders. The top-level Distinctive trim adds things like, 17-inch sports alloys, red Brembo callipers, rear parking sensors and chrome/aluminium detailing for an extra £1,200. 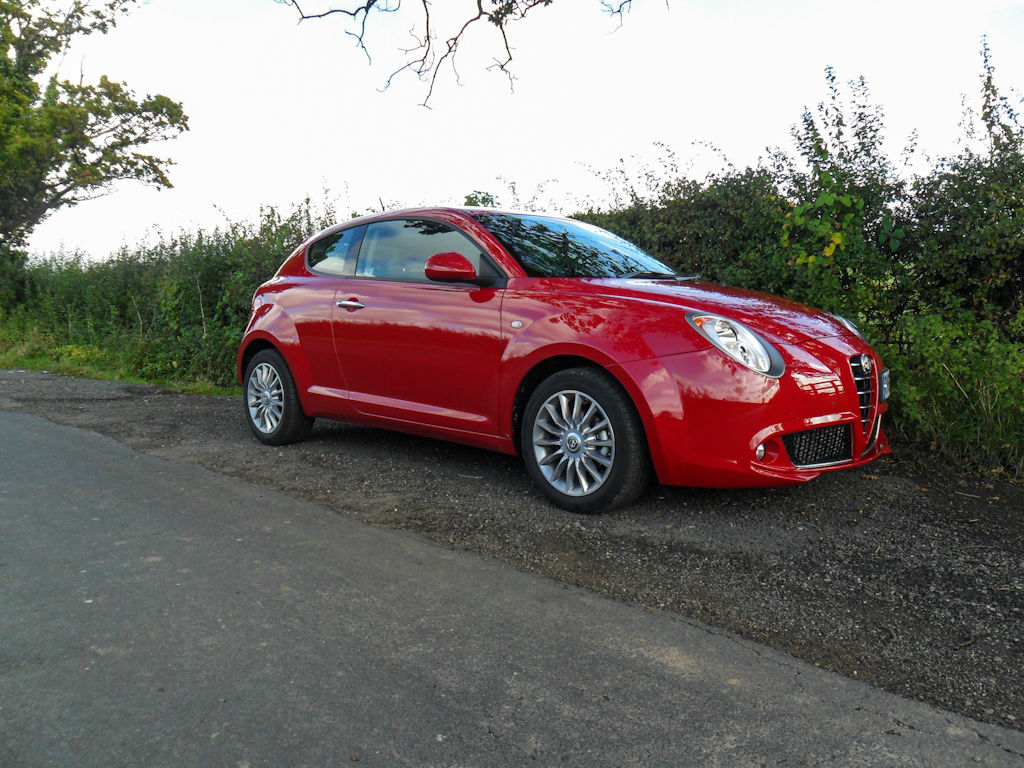 The little Mito has been around for a while now and I think it’s either a love or hate kind of shape. Personally, I think it looks stylish, and European. The small distinctive Alfa V grille pinches the nose of the car, on each side the slightly bug eyed headlights give the car a cute, feminine look to it. The back of the car also pinches in toward the hatchback; two round brake lights sit at the outermost edges of the car. The rear of the car does seem a little bland and boring; it just looks too rounded to me. A nice matte or gloss diffuser at the bottom would have added a lot to the look, and also made the car appear a lot wider at the rear. 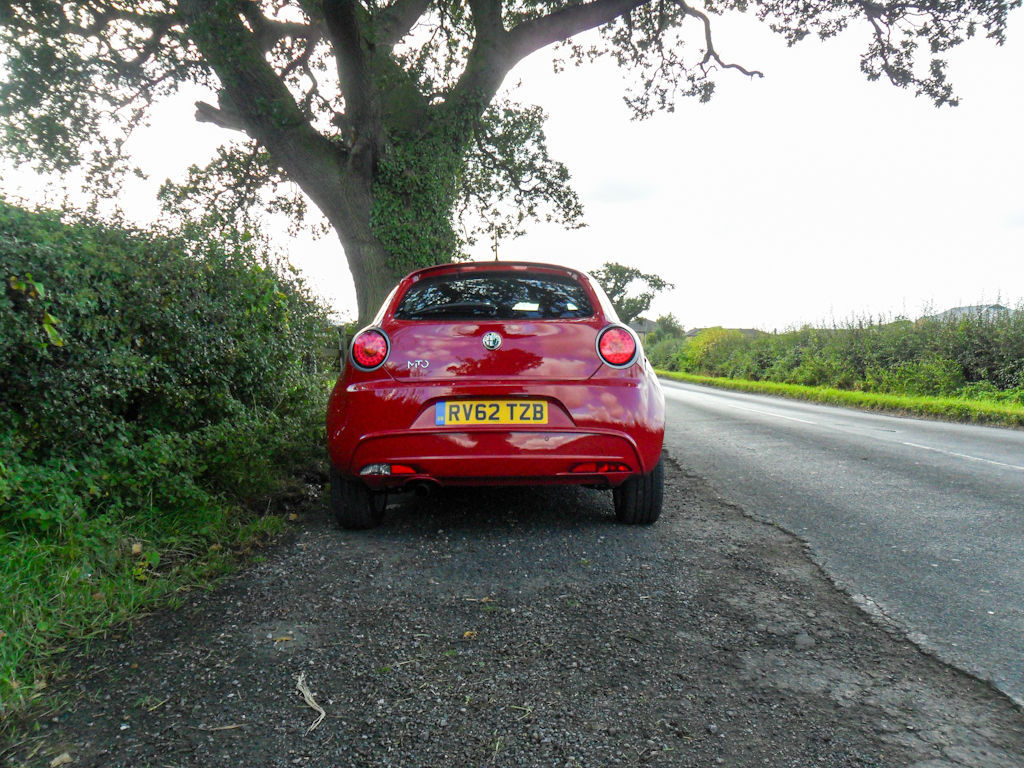 Now with only two cylinders I wasn’t holding out much hope of a good drive, the Mito, while being small is still a pretty big car for only 2 cylinders to handle. I shouldn’t have worried though, the raspy engine noise pierces the cabin slightly, but it makes the drive feel quite engaging and fast (even though it isn’t a speedy car). 0-60 times are a long 12.5 seconds, but it never felt that excruciatingly slow. The little Alfa is fitted with the DNA driving controls, these change the mapping depending which mode you select. Its standard across the Alfa range…..but to be honest I didn’t feel a lot of difference when changing modes in the Mito. Dynamic mode felt much the same as Normal; you can’t blame it as the car has such a tinsy engine.

To get the car to progress at a decent rate you have to keep the revs high and make the engine really scream, this will undoubtedly kill the claimed 74.3MPG! Along the country roads the car was slightly crashy, it felt a little skittish over lumps and bumps too which wasnt confidence inspiring, but luckily the Mito had sharp, responsive brakes. Acceleration felt faster than it is, no doubt due to the buzzy engine working hard under the bonnet, however it felt the same as a 1.4 Ibiza that has around the same BHP.

Alfa claim the turbo engine in the Mito gives between 10-25% more torque, than the comparable 105 or 75bhp engine, yet still only pumps out 96g/km of CO2 . 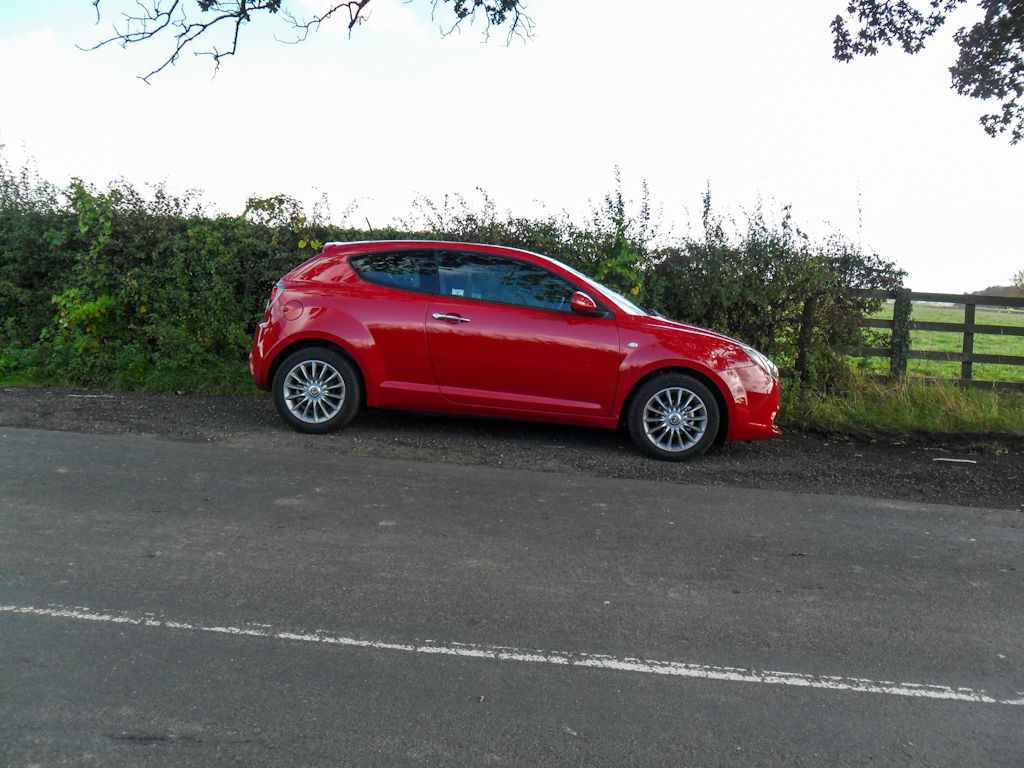 Inside the Mito the chicness of the outside vanishes, the interior is rather bland and plastic. The steering wheel design looks a little dated, and so do the stereo controls. Our car had climate control, which just looked a tad basic and sparse. The door cards appear to be one huge great piece of plastic, and had no soft fabric inserts, nor any real design to them. I couldn’t get a picture of the top of the gearstick, but it looks like a pressed milk bottle top, all shiny and dimpled; you can’t easily see the gears, which was annoying. 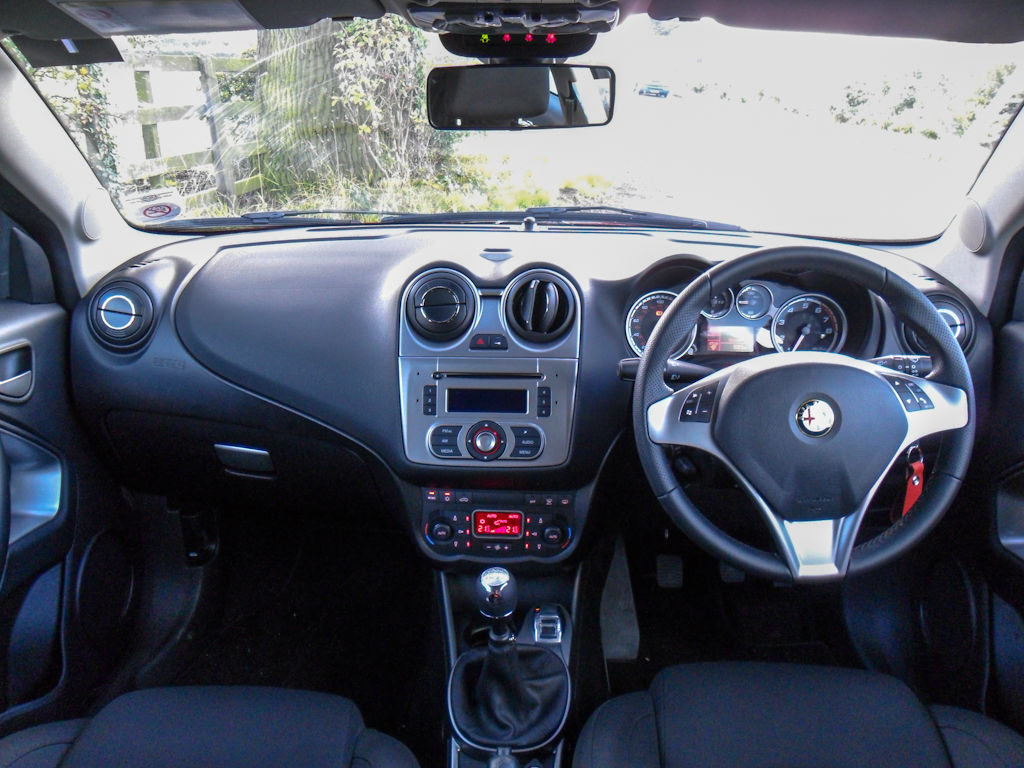 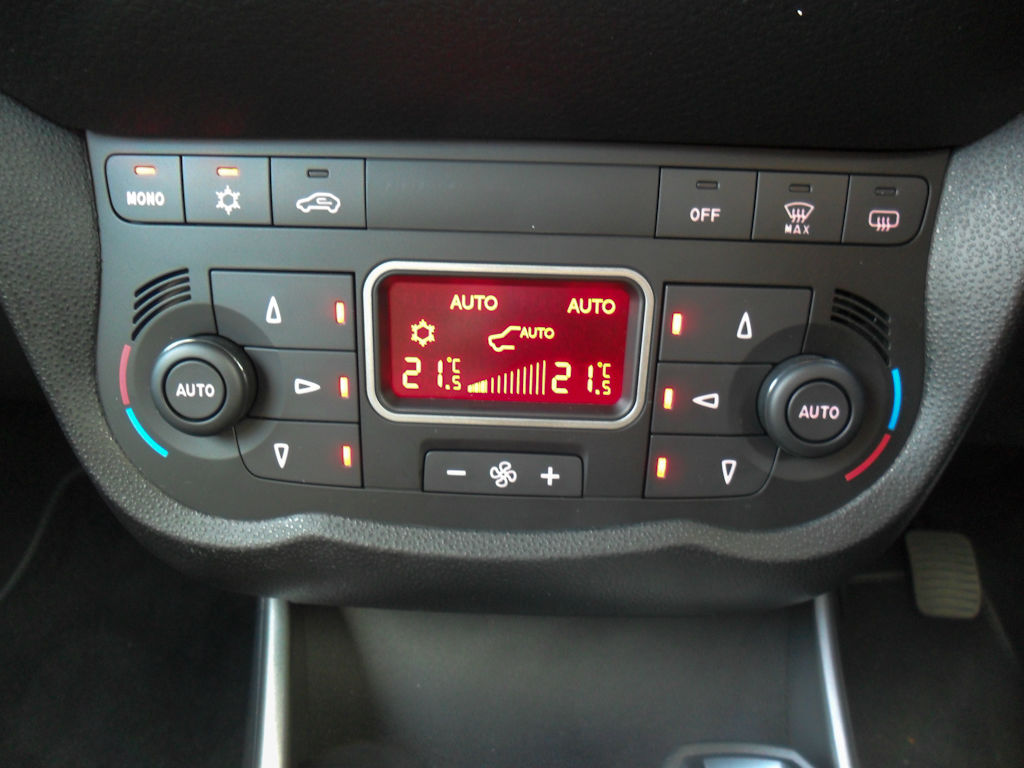 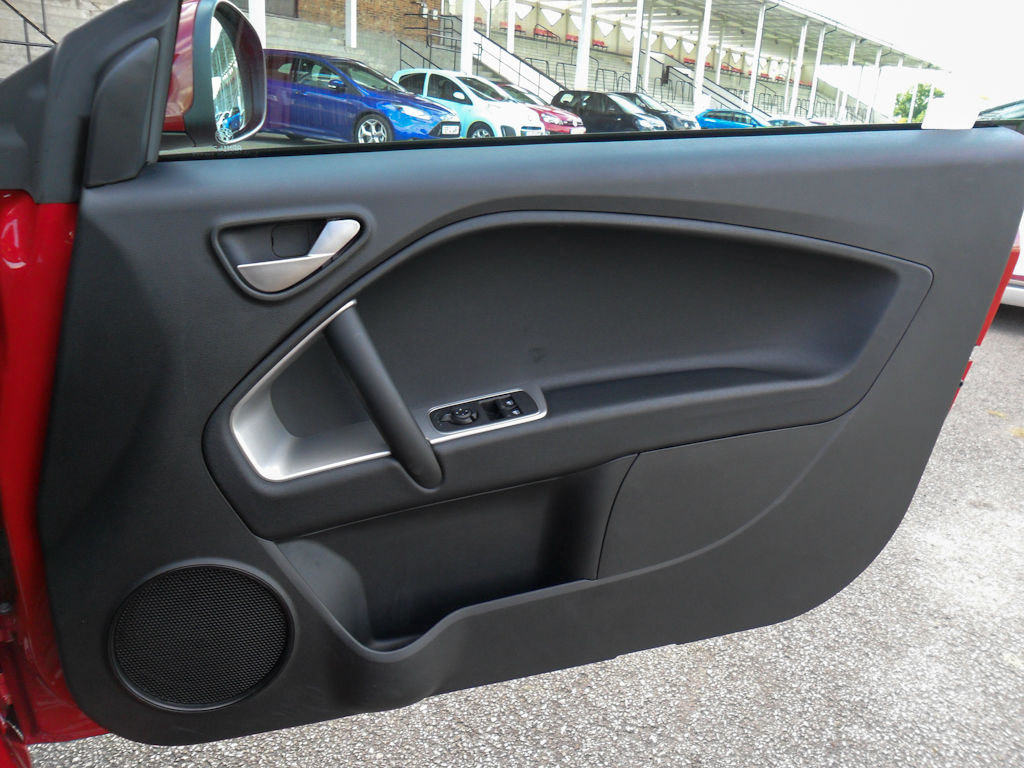 It’s a real shame, as the outside looks so good, a funky interior like the Fiat 500, or at the very least some soft touch plastics would make the inside feel a lot classier and modern.

There was ample room in the back for a normal sized adult, there was also plenty of headroom. The boot must suffer because of this, as it is rather small, it also has a really deep lip to it, which doesn’t make loading very easy. It’s one of the deepest lips I have ever seen on a hatchback! In addition, the bare metal seatbacks looked very cheap, and will no doubt get battered and scratched during the cars life. One other thing that I didn’t like was the solid rear seats…..it’s not a sports car so why doesn’t it have 60/40 split seating as standard? I believe it’s a £450 option to have split seats! 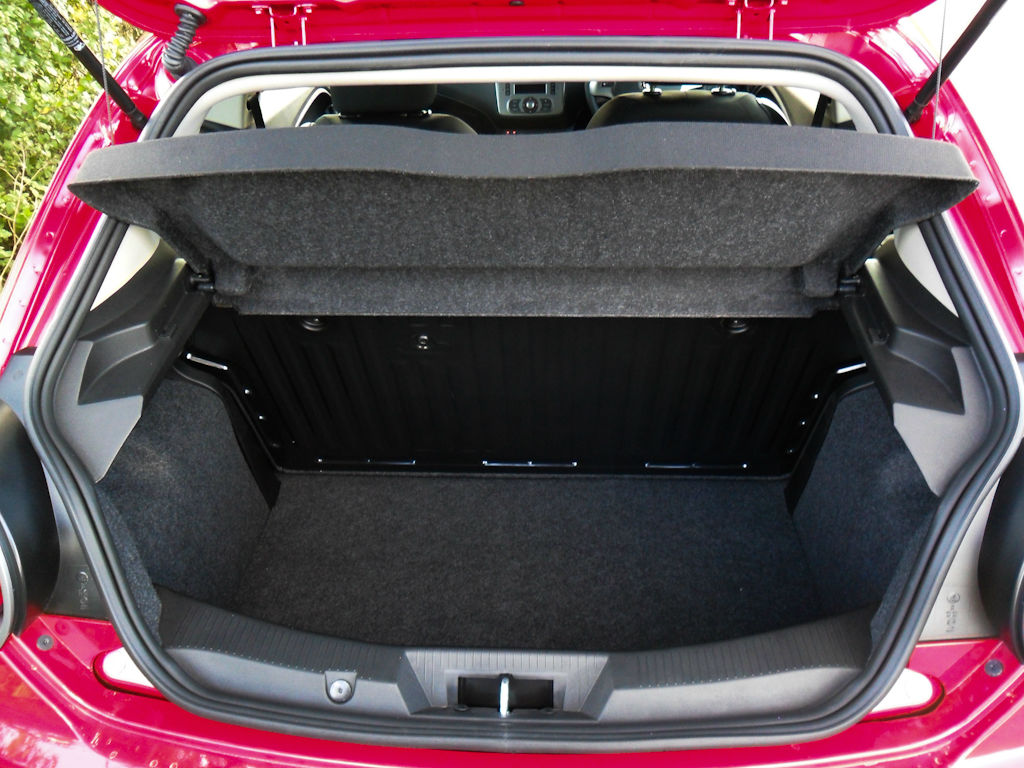 I would suggest the TwinAir Mito as a town runabout, it has ample power for most people, and driven sensibly will return good fuel economy. Expect real world MPG to be high 40’s rather than the spectacular 57.6 (Urban) brochure figures. If it’s a cheap economical car for long journeys this isn’t the car for you, the two cylinder wouldn’t be a good motorway option purely because of the engine noise at higher revs.

At £14k, you can find nicer interiors for the money, and if space isn’t necessary, a TwinAir Fiat 500 would be more stylish and fun to drive. However, the exterior still looks as fresh as it did in 2007, when the concept was unveiled.