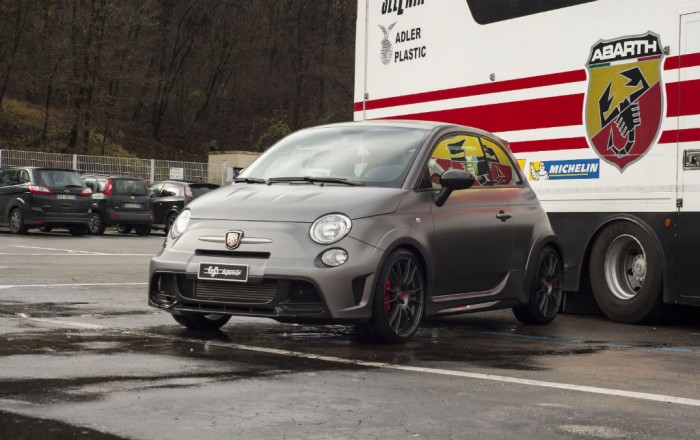 Pasta, coffee, cinquecento, three words synonymous with a trip to the great European boot that is Italy.

Named after the iconic Abarth 695 and unveiled 50 years after its ancestor, this is a stripped out monster upgrade to their already aggressive 595. 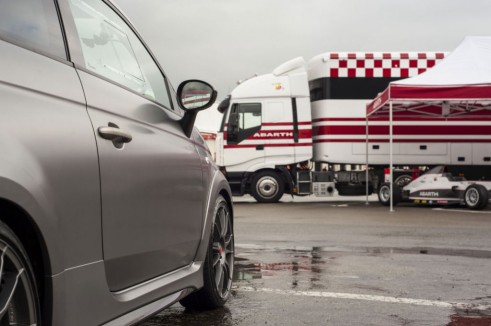 Abarth say they decided to make a track car for the road, and started with their 695 Assetto Corse one-make racing car to create what we’re in the Italian hills to drive today. In reality they began with the 595 and stripped back.

Outside it takes the Fiat 500 and steps everything up to max anger. Clad in matte gray the Biposto gains as much in looks as it loses in weight. 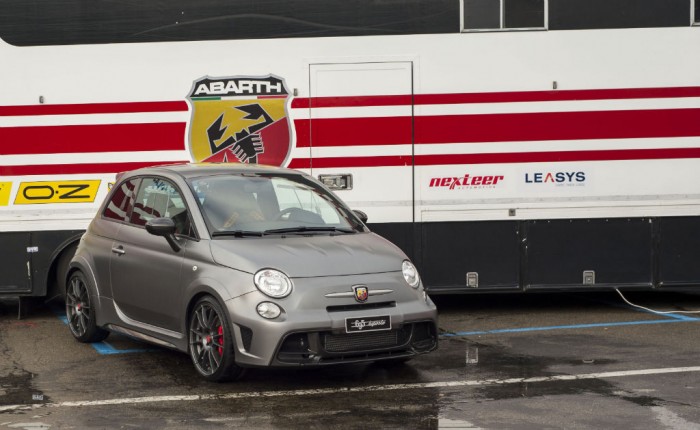 Up front the fog lights are removed, replaced with a new more aggressive bumper, the side gets low skirts while at the rear sprouts a diffuser and two, humongous, exhausts.

The aggressive bumper is replicated at the back, as well as a rear wing Abarth assure us is for more than show. Want more drama? The 695 sprouts cooling vents everywhere. 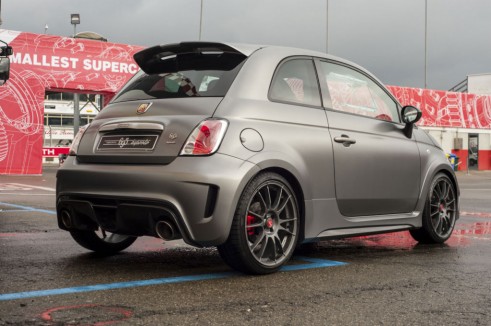 Hunkered down the 695 has a wider track than its little brother, meaning the wheel arches flair to fit the huge 18 inch dark grey alloys.

Inside the standard car is a little disappointing, some of the plastics feel cheap and the without paying for the racing seats the normal ones don’t hold you enough on track. 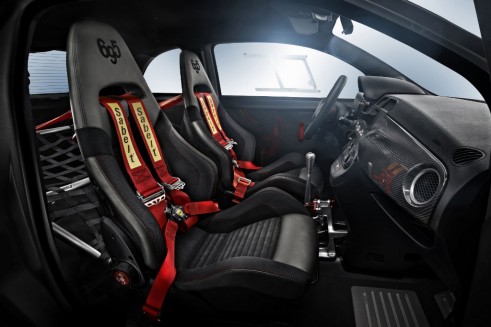 However add in the important extras everything changes. Behind the leather clad wheel is a small, easy to miss, turbo boost gauge. If you specify the showpiece gearbox say goodbye to half the dash.

The special ‘box sits alone between the seats, cleared of all pointless features it is housed in a satisfying metal gate and nothing else. It is a thing of beauty, a long pole sprouting from the open mechanics, topped with a striking metal knob.

It, and the optional track pack make the car feel more like the stripped out racer it descends from. There’s even Perspex windows complete with racing air vent. 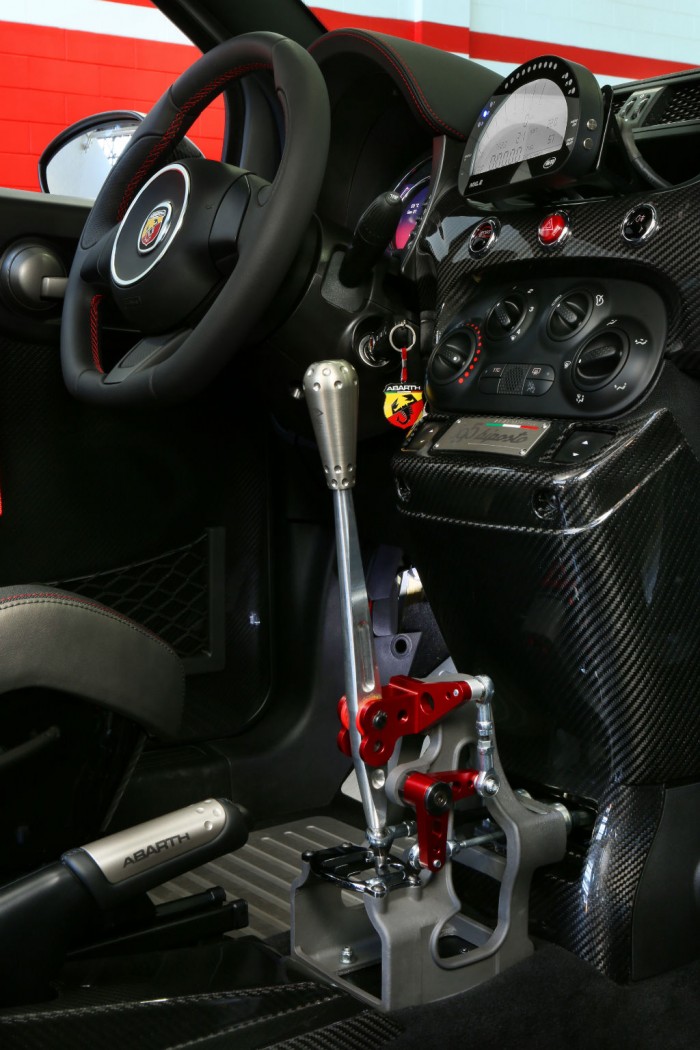 Don’t expect to find a radio here though, that’s just one of the features that has made way for the Biposto badge to arrive.

There are no back seats, no parcel shelf, no xenon headlights, no climate control, all sacrificed in the manic scramble to save weight that sees the Biposto join the elite club of cars tipping the scales at under a tonne.

Sit down behind the wheel and turn the key, yes a key, no starter buttons here, and a new TFT screen lights up. 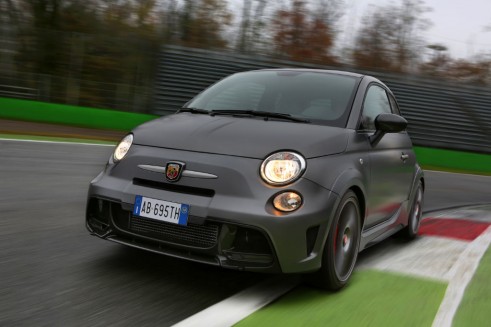 If you’ve specified the dogring gearbox this is where you need to concentrate. It’s an off putting sensation when you can see all the inner workings normally hidden in mystery behind a plastic gait.

“Just don’t look down” I’m warned as I’m strapped in with the four-point harness to be found in the extras list.

The instructor has a point, those inner workings are the complete inverse to what you expect, move the wonderful stick forwards and the selector moves back, stick left, selector right, staring at it is mesmerising. 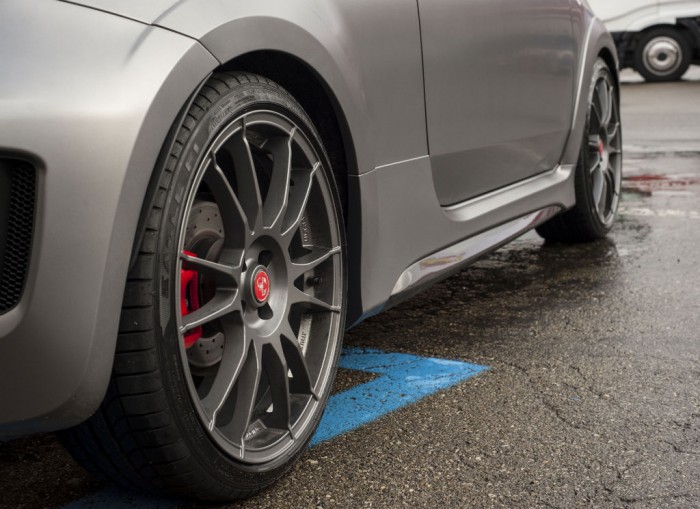 It’s dumbfounding and strange, but absolutely rewarding once you get the hang of it. The dog ring means if you match revs right you can shift without the clutch, however even with the left pedal brought into play each change is a wonderful gunshot crack across the metal gate.

It lends the car more purpose, the standard box is very nice, but feels no different to one you’d find pootling around Tesco in the hands of your aunt.

With 190 bhp it’s an eager little car, the valve in the exhausts provides a heavy, rasping shout when the revs get high but at slower speeds it’s closure means the sound is never intrusive. 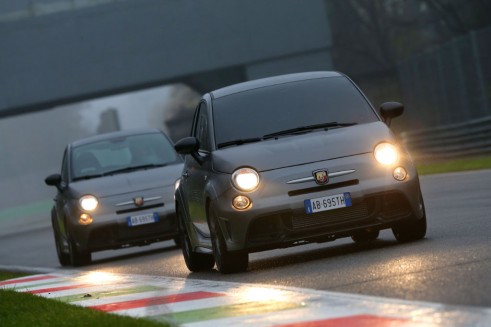 All those horses come from a 1.4 litre turbocharged motor, pumping that power through the front wheels only.

The engine will soon be slotted into the Italian version of the FIA’s new Formula 4 series.

Out on the track this car shows the work Abarth have put into it, there’s very little roll, even when you hit the hard Italian curbs, and the brakes are strong, albeit a few laps of hard use will see the pedal starting to move further towards the bulkhead. 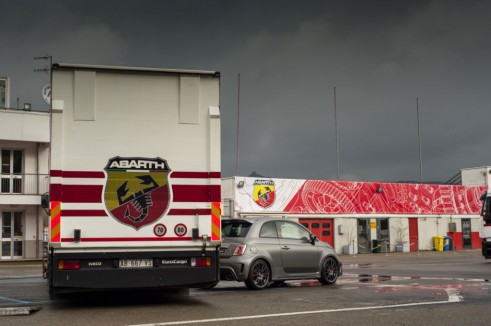 These little cars are supposed to be fun, and thankfully that’s exactly how Abarth have fettled the 695’s traction control. Flick it hard into a corner and the back-end will step out very willingly, allowing you to get just toward the point of no return before the electronics snap you back into line.

It’s a very Italian style, as if a hand waving instructor was sat next to you shouting “wahay, yes, now enough”, you cannot help but get out with a smile on your face.

It’s been raining for several days and although it stopped on the morning we arrived at the circuit the Tarmac is still incredibly greasy, greasy enough that at full power the electronics scrabble for traction. 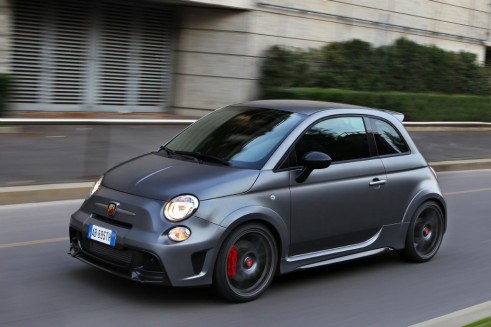 Sadly Abarth didn’t give us a lot of time on the road, but, in the Italian mountains, we were given a strip of paving akin to the worst you could find in England and the Biposto showed no sign of being put off.

They claim to have managed to eliminate almost all of the turbo lag, but don’t believe them. In order to get the power out of the 695 you need to keep the revs high. Change up at the wrong point and you’ll be drumming your fingers on the wheel before the power returns.

Sadly the steering gives very little feel, it never weights up in the corners, leaving a slightly unnerving vagary as to what the front end is doing at times. 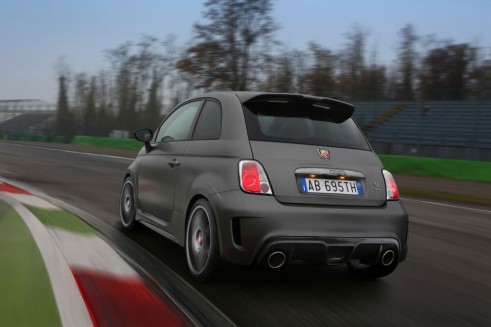 Each car has fully adjustable dampers, which are set up for the road when they leave the production line but can be tuned to more suit the track should a 695 live as a trackday car.

It’s a great looker, and this is fun little car to drive that will put a smile on your face every time, especially if you have a track nearby.

The problem? The 695 Biposto is £32,900 as standard. For that you can forget the carbon fibre, the track pack, the dog ring gearbox. 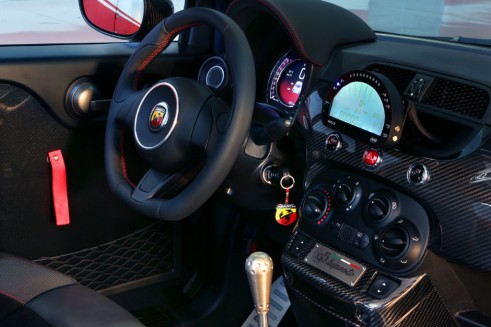 If you spec this up enough you will be able to hit £50,000 and that is a lot considering it nudges past amateur car territory and into the Cayman ranks.

As standard, shelling out 33k gets the carbon fibre front apron, bigger rear diffuser, those giant exhausts – courtesy of Akraprovic – plus the 18-inch Oz wheels, and red calipered Brembo stoppers

Desire that carbon? That’ll be £3,700. The race pack with its lovely, but awkwardly placed, telemetry cranks on another £3,700.

And there’s still more, the polycarbonate windows are extra, as is the 124 pack of aluminium and carbon fibre. That headline gearbox is another £8,500 thank you very much. 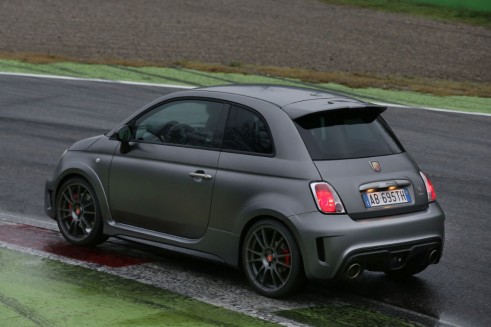 However if you have the money and the inclination, and you really want a short wheelbase track day hero, this is the car for you.

Fiat won’t expect to shift these in huge numbers, and most people will just spec on the gearbox. This is a halo car, a headline grabber that will be bought by fans and those who already own a 4C.

It should not make sense, but the 695 is such good fun that we’d have one if we could find the change, if you can get hold of one, it’s an absolute riot.

It may not be the “smallest supercar” as Abarth will insist. but it is a pint-sized rocket, and they even throw in a free helmet.

Abarth 695 Biposto – A hoot to drive, stunning optional gearbox, can get rather pricey! 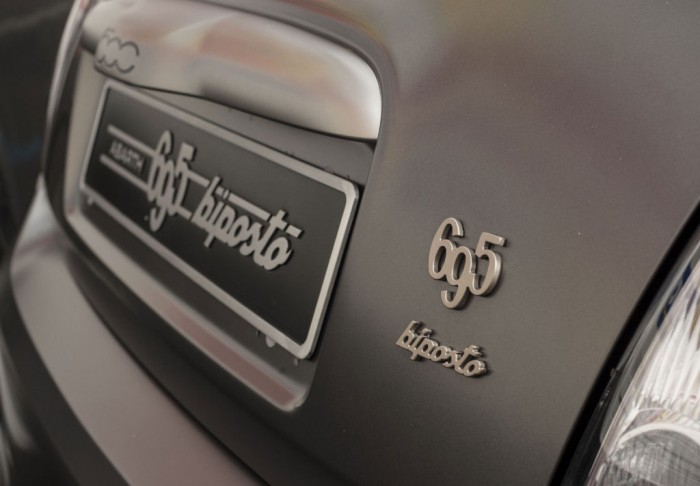 © – All text & some imagery Copyright of carwitter.com

Peugeot 208 GTi 30th Anniversary Review – How it should’ve been