We took not one, but two out for a spin to find out. 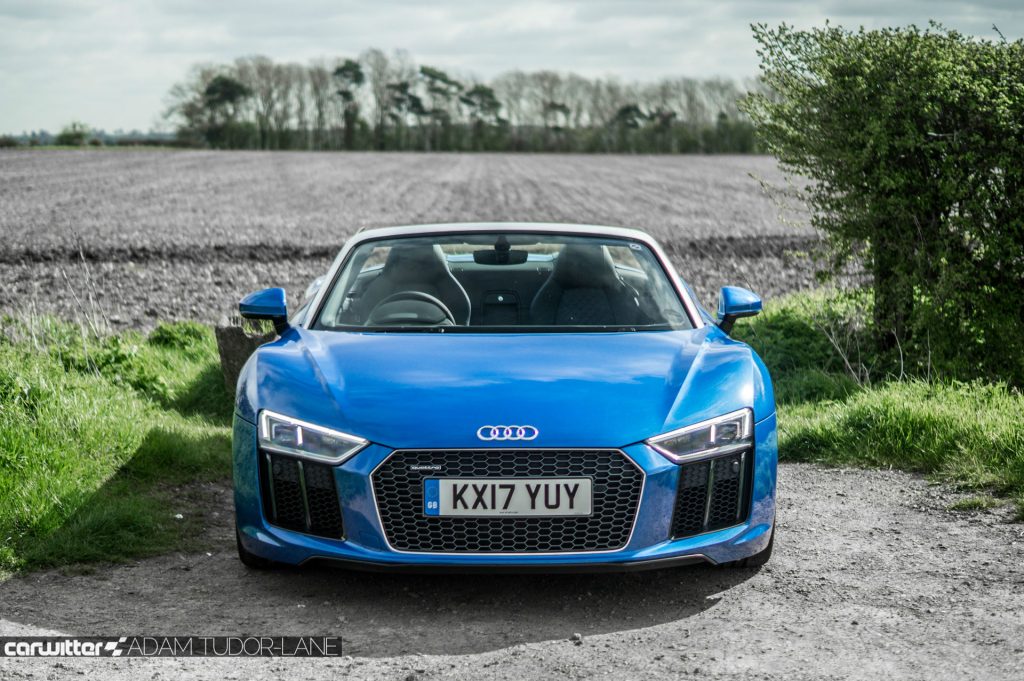 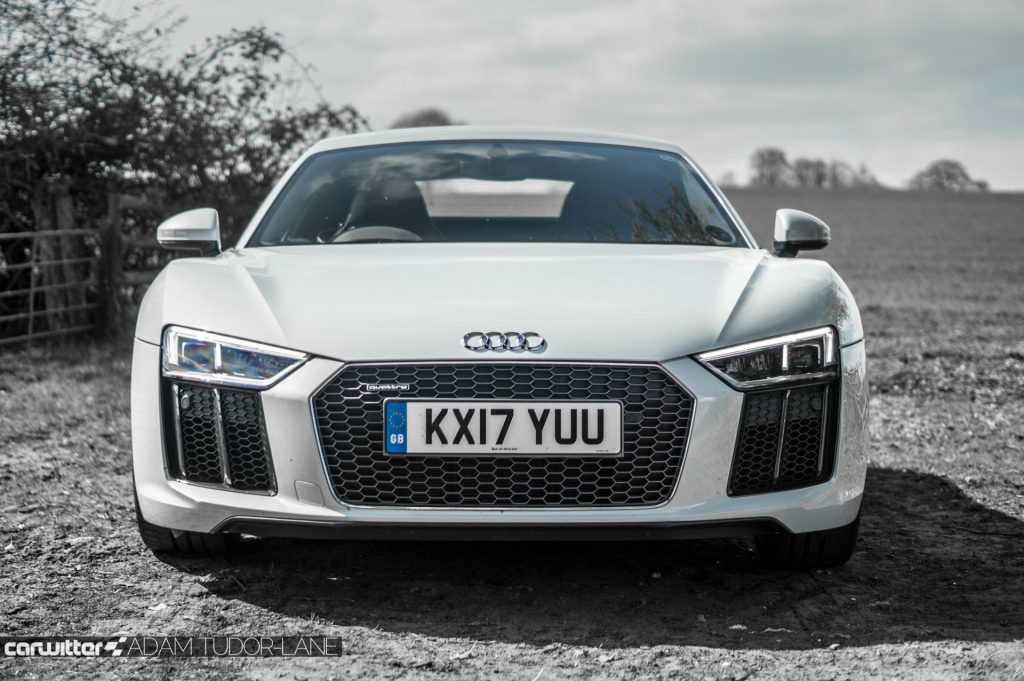 Firstly, you need to know the differences between the two. The V10 Plus adds;

Which basically boils down to, different alloys, pricey carbon ceramic brakes, the equivalent of a small hatchback in extra grunt and sportier seats. The gloss black exterior bits…who cares…and three more buttons on the steering wheel…woop. Oh, and a fixed rear spoiler which may, or may not be to your taste.

First ever opportunity to drive an #Audi #R8…well it would be rude not to right?! #V10 pic.twitter.com/eP8Uefj43I

Slipping in to the R8 you first notice the low slung seating, that huge windscreen and low bonnet pretty much place the road in full view. Pressing the big red starter button wakes the beast, the optional sports exhaust (£1,800) is a must – it’s not standard on the Plus model either.

Being one of the last manufacturers to fit a normally aspirated V10 engine the R8 embodies the theatre of an old school Formula 1 machine. Plant the throttle, and flick up on the paddles just before the red line. The noise, the drama, it’s divine. You just want those revs to rise, to keep hearing shift after shift.

Reality sets in when you’re doing double the legal speed and are only in third gear. And that’s the problem with supercars…

0-60 can be had in 3.4 seconds, the Plus model will drop that by .3. But once again, in the real world, who would notice .3 of a second. That’s roughly the same time it takes for you to blink. Paper stat fanboys can pipe down. 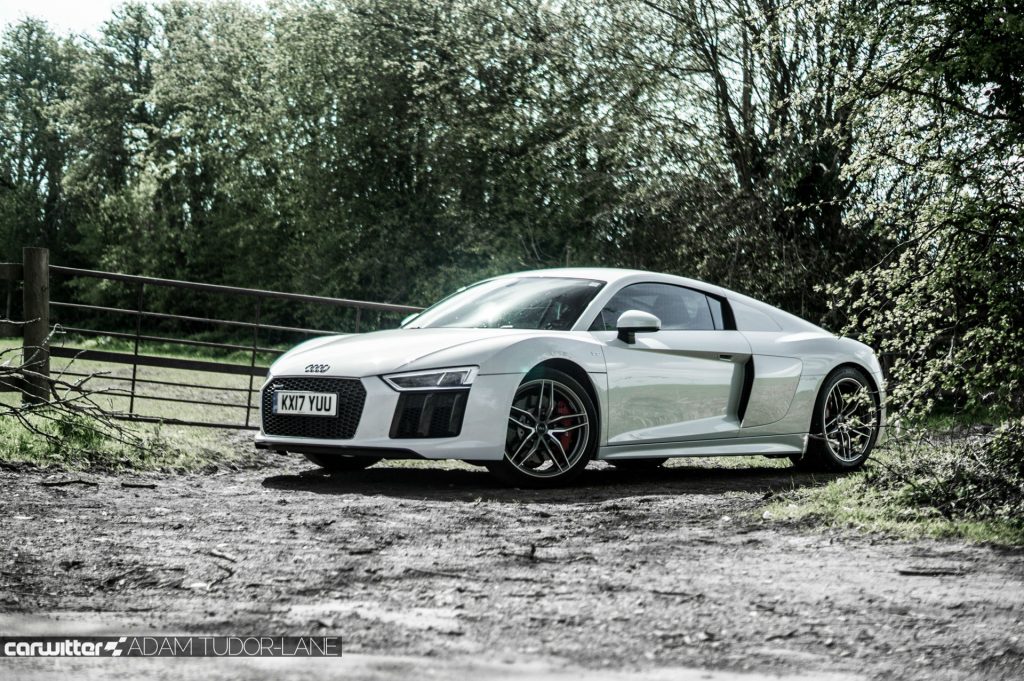 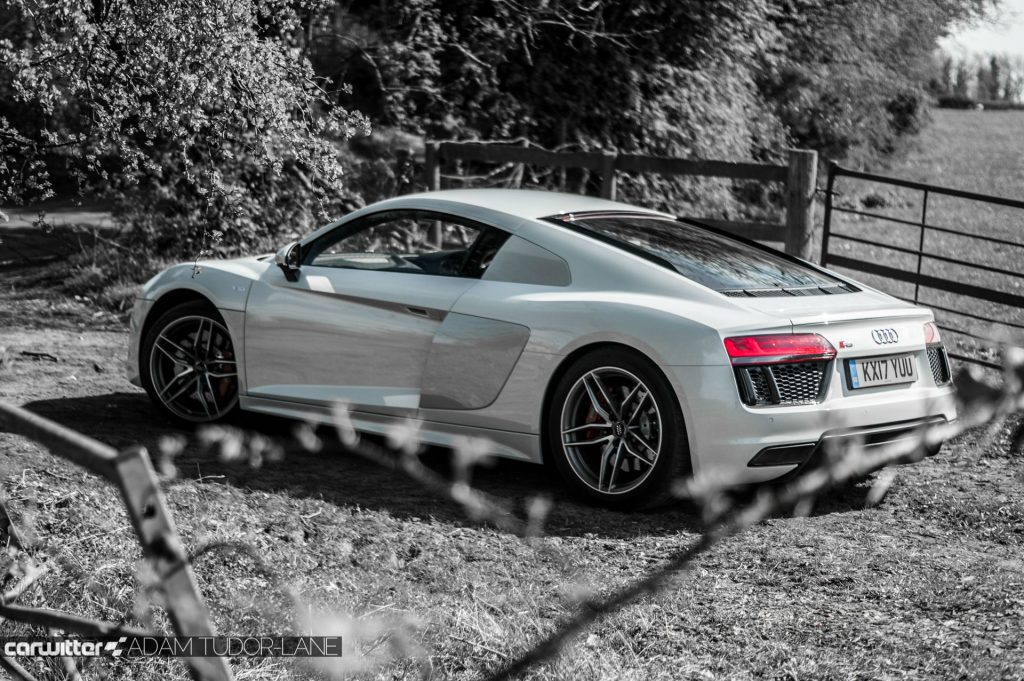 A new twin clutch S tronic ‘box deals with the power, there’s no manual to spec these days. Naturally, there’s a few different driving modes. You’ll forgo the user tweakable ‘Performance’ setting that the Plus models get. That would allow you to adjust the stability controls, a la race car. Unless you’re going on track…there’s no real advantage.

Driving an R8 is child’s play. It’s no Jaguar F-Type R that’s waiting to bite your head off if you floor it in the wrong place. The Quattro all-wheel drive lets you corner at some ludicrous speeds. You can push as hard as you like, try and unsettle it mid turn, brake insanely deep into a corner…it has your back.

It’s truly the supercar that any luddite can drive. 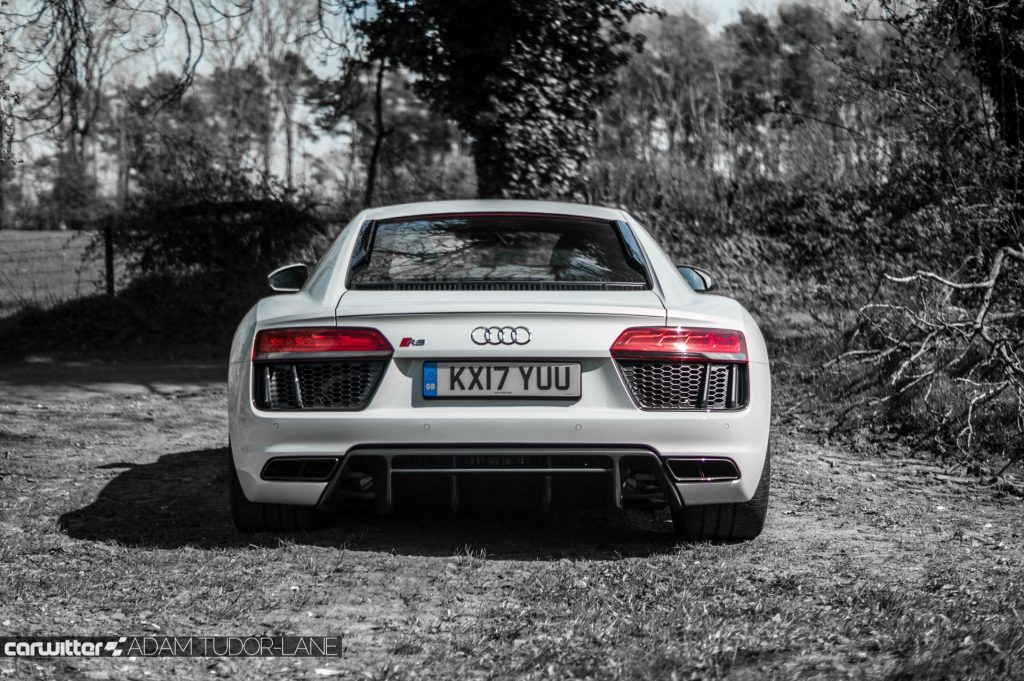 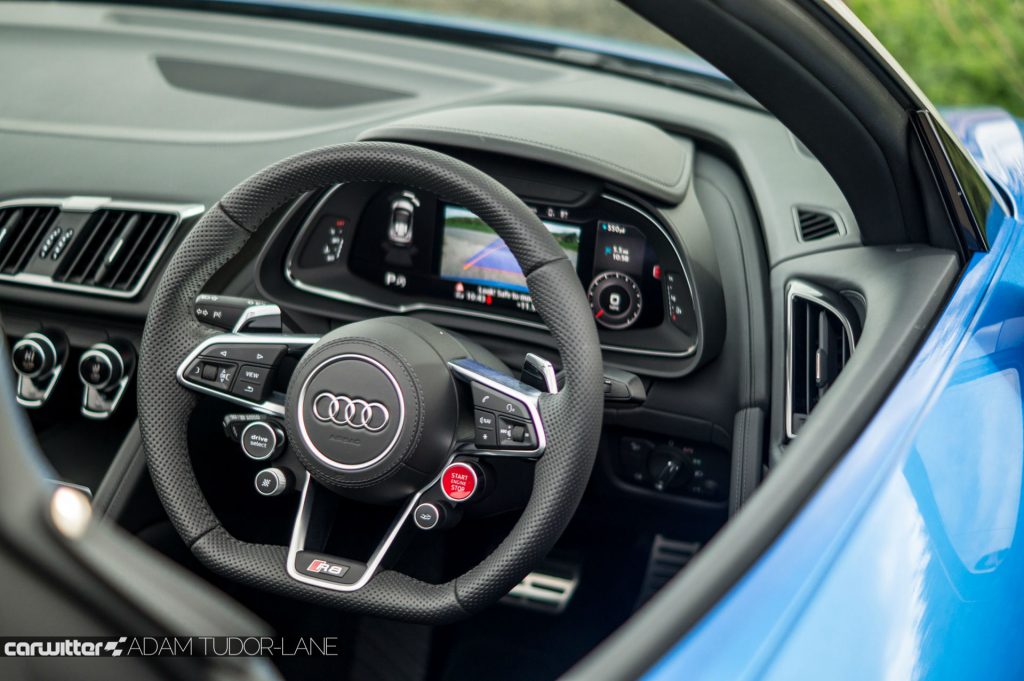 Turn in is flat, with nice direct steering, although feedback is lacking you can still position the R8 perfectly.

If you’re worried about not having the pricey carbon ceramics, don’t. The steel jobbies stop you with ease. Braking hard corner after corner resulted in no noticeable feel in the pedal. 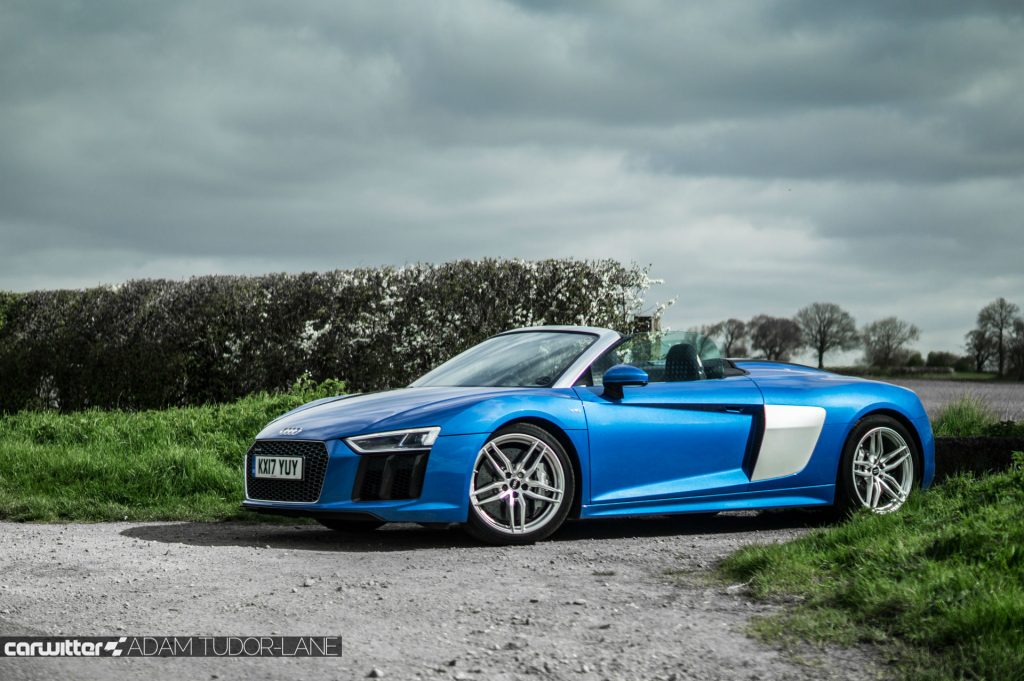 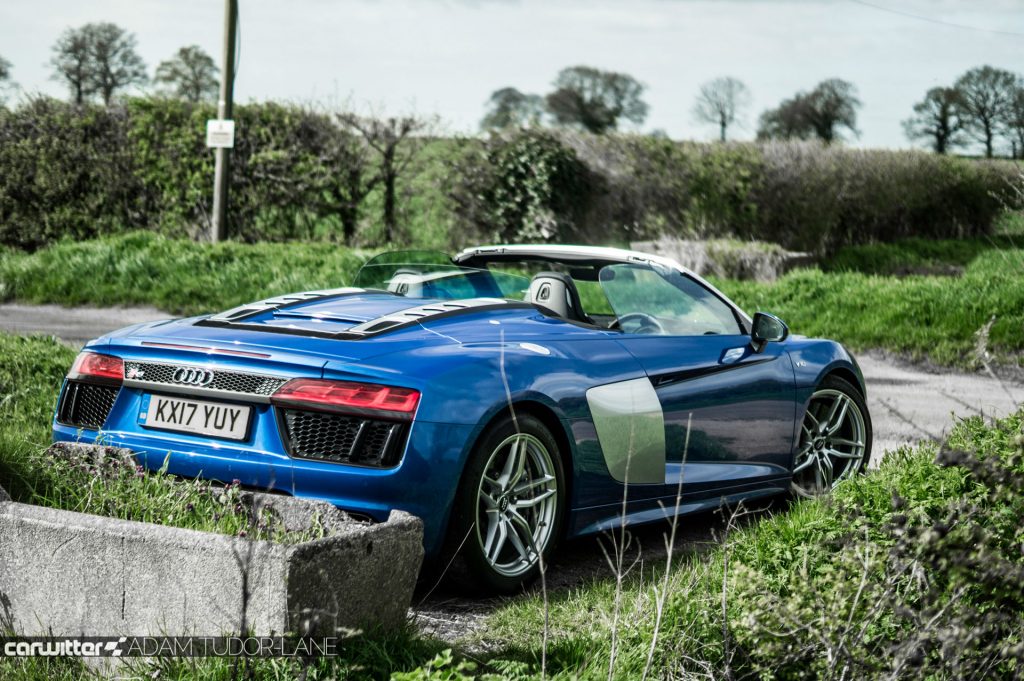 Wanting a more raucous experience? You can opt for the R8 Spyder from £132,020. This one can’t be had in Plus form.

Its soft top roof will fold in 20 seconds at speeds up to 31 MPH.  A glass wind deflector that sits behind the cockpit keeps the worst of the buffeting at bay, and if you want to listen to crystal clear audio whilst topless you’ll have to opt for the stunning Bang & Olufsen stereo system.

It may cost £1,750 but it features 12 loudspeakers, bass speakers in the doors, a sub in the passenger footwell and two speakers in each headrest – that goes for the sports seats too. Sound from the system was incredible, crystal clear even with the hood down. If you like your music, it’s a worthy upgrade. 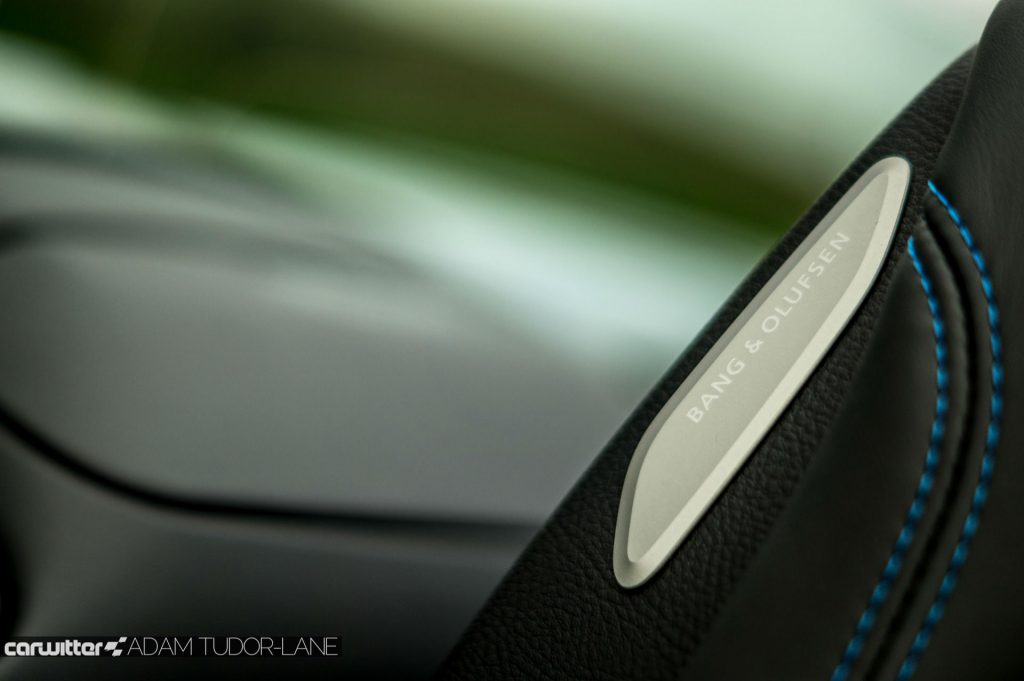 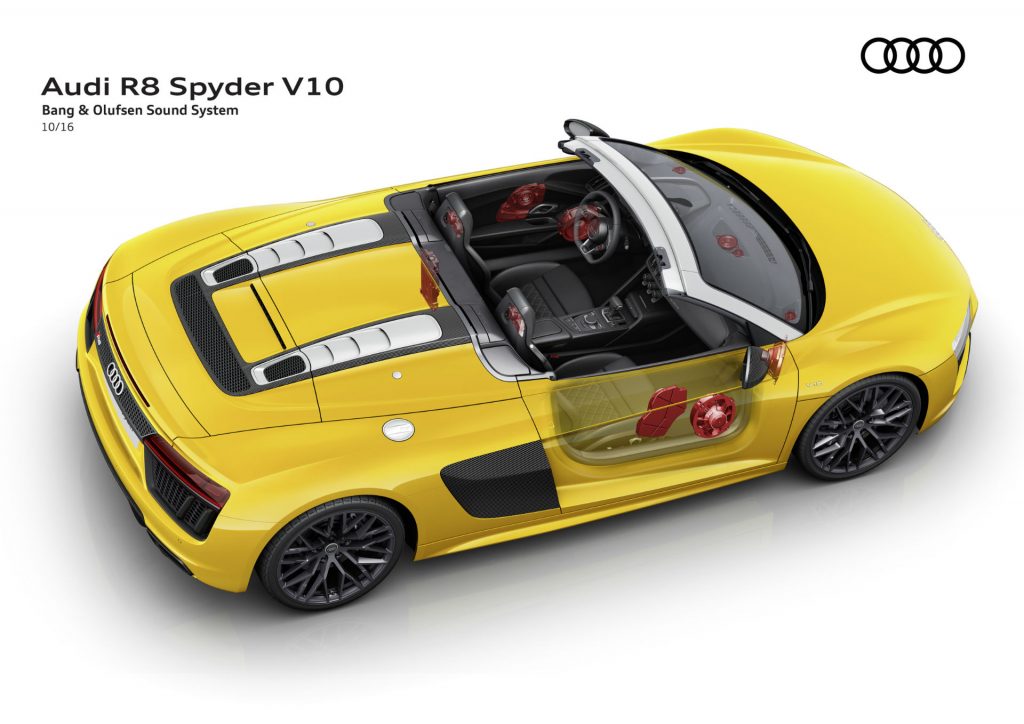 So why would you buy the normal R8 over the Plus?

Well, for one thing those carbon ceramic brakes. Agreed they should last the life of the car, but when you’re looking at the thick end of £10,000 to replace them…that’s not so fun. Brake feel is always a point of contention, but carbon ceramics are quite grabby when being driven daily. They bite quickly, and they bite hard. Steelies would serve you on normal roads.

You don’t need the extra power. Trust me. The standard R8 is so damn quick. It will outrun pretty much anything else on the road, and don’t forget the speed limit is 70 no matter what you drive. 69 more horses are negligible when we’re talking this sort of power.

Bucket seats look nice, granted. But you can option them for a £3k premium. They add more atmosphere to what is otherwise a rather bland and generic Audi cabin.

You need the sports exhaust either way, so throw an extra £1,800 on that list price.

Still, we’ve just saved you £9,200. Go buy yourself a new watch, or treat the wife to a brand new Ford Ka. She’d love you for that. 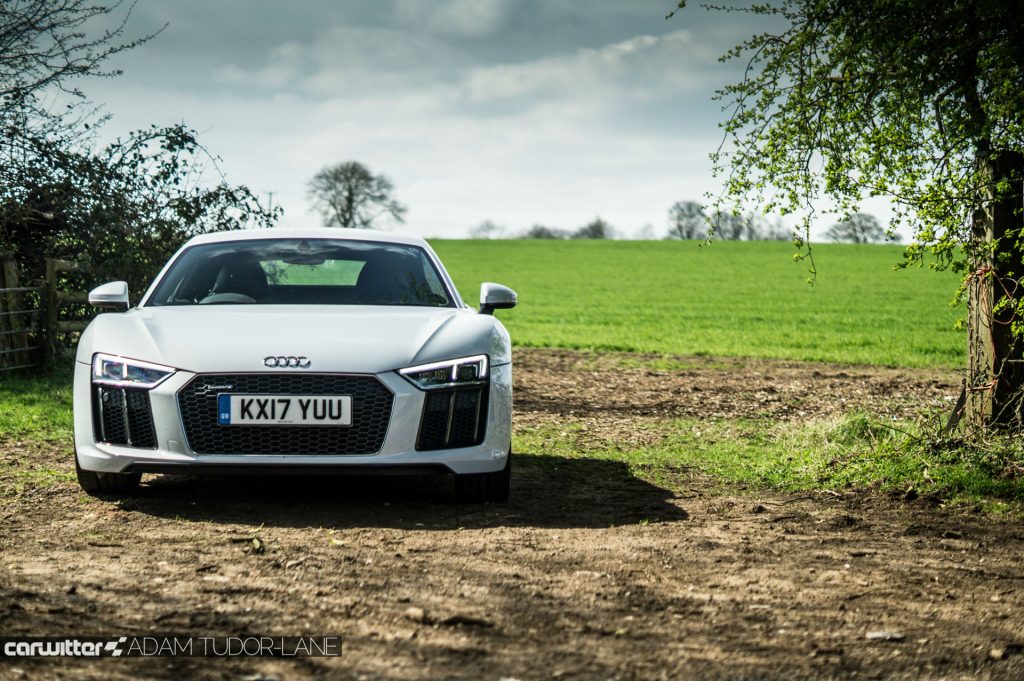 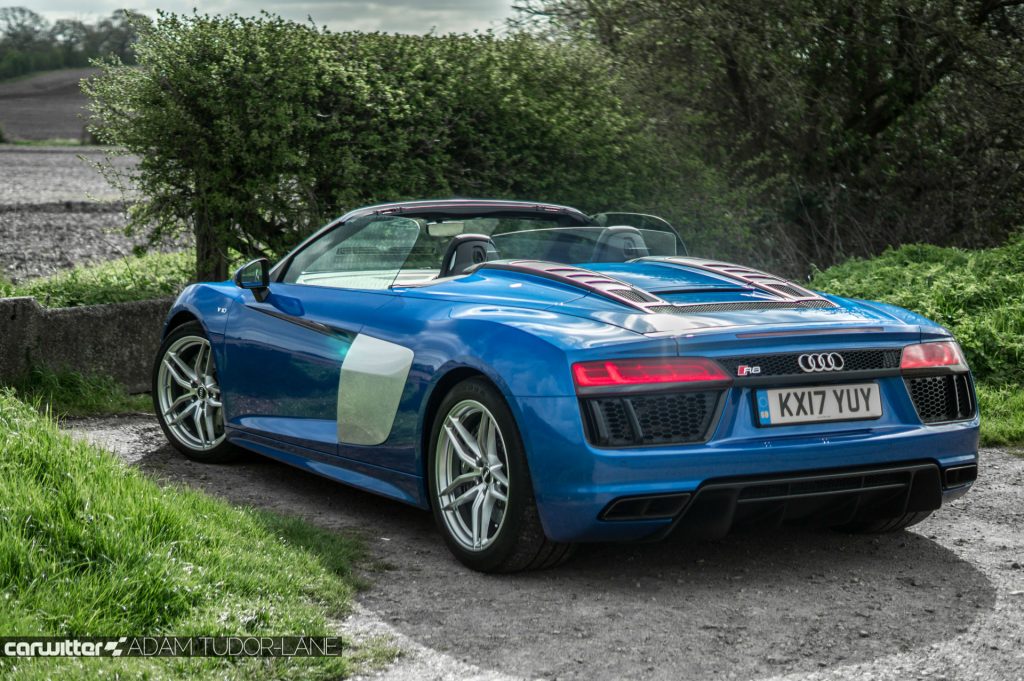 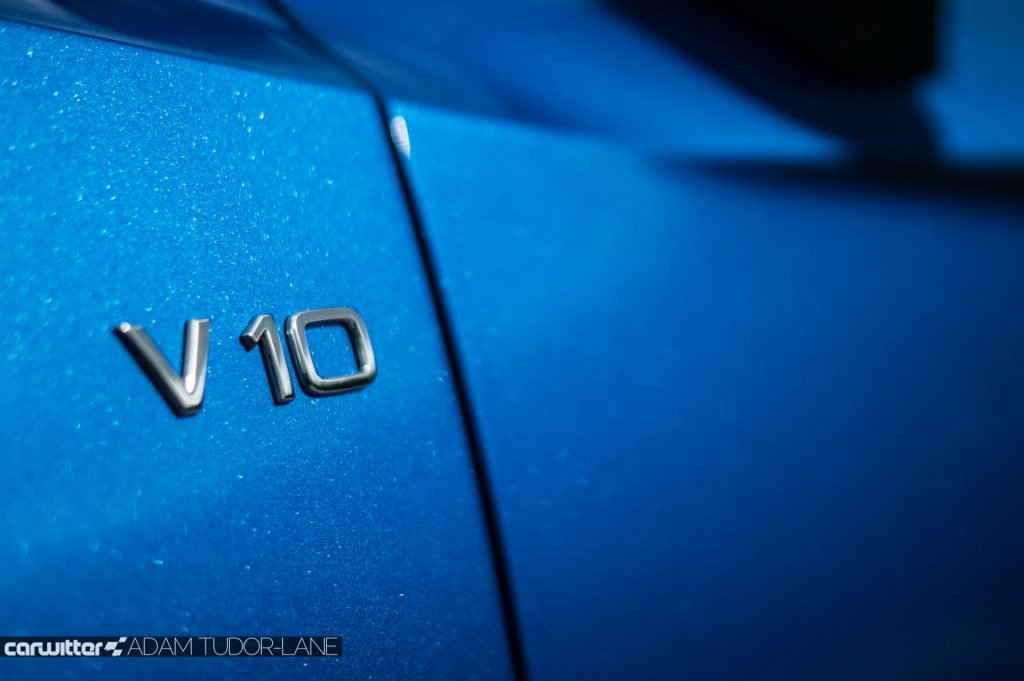 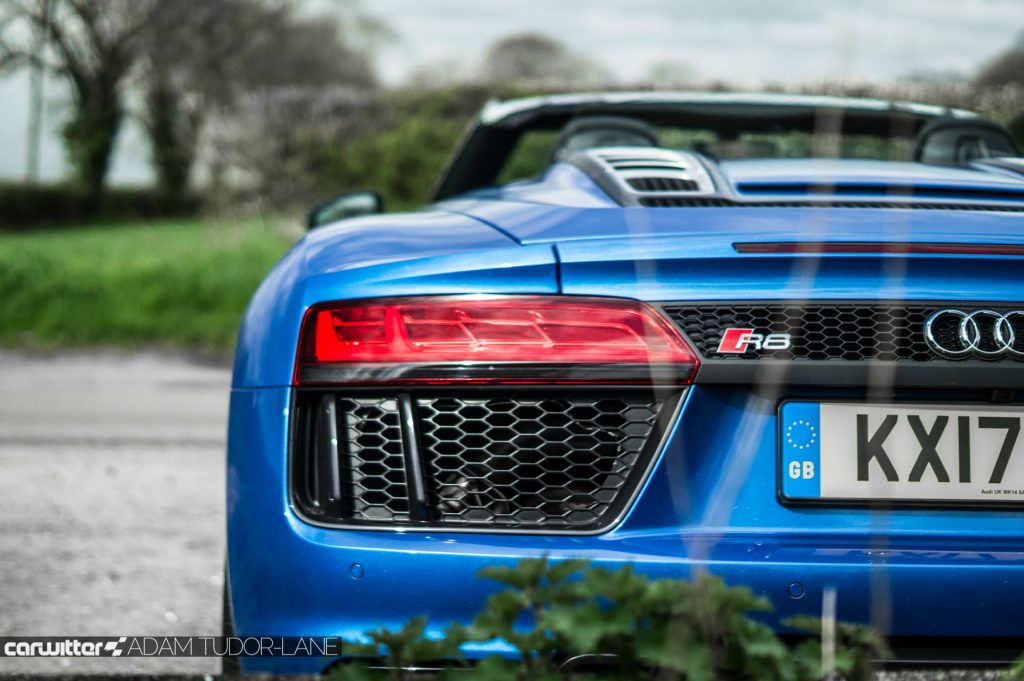 How To Make Your Love Of Cars Into A Career