Back in the day the FR was toward the upper echelons of performance SEAT’s. For a time in the 2000’s it was the only performance Ibiza you could get.

Now however the Cupra has taken the crown, and the FR has become more of a trim level than a performance option.

It can be had with any number of engines these days, but we opted for the 1.2 TSi.

With a few choice options – the most expensive being the sat nav and climate control – an additional £2k premium was added to the starting price of £14,480. 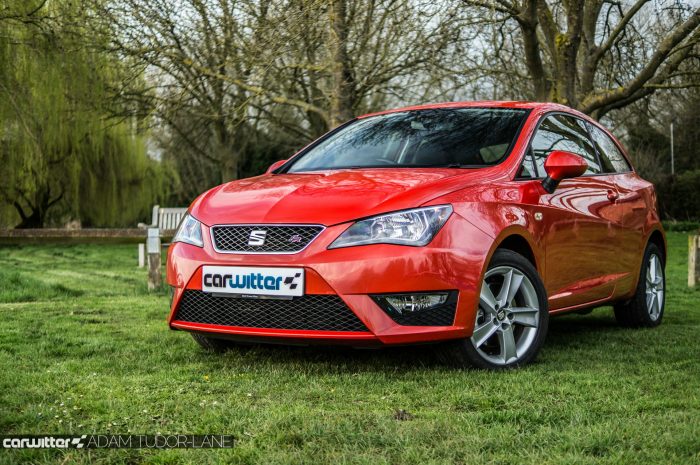 There isn’t a huge amount to be said about the design of the SEAT Ibiza.

First seen in 2008 we all know what it looks like, even though this is called the ‘New’ SEAT Ibiza, it has only had a minor facelift. This FR trim gets a tweaked set of front and rear bumpers, twin exhaust pipes and electric folding mirrors.

But it still looks a bit budget with those normal, old fashioned bulb headlights…Bi-xenon jobbies will cost you an extra £425. 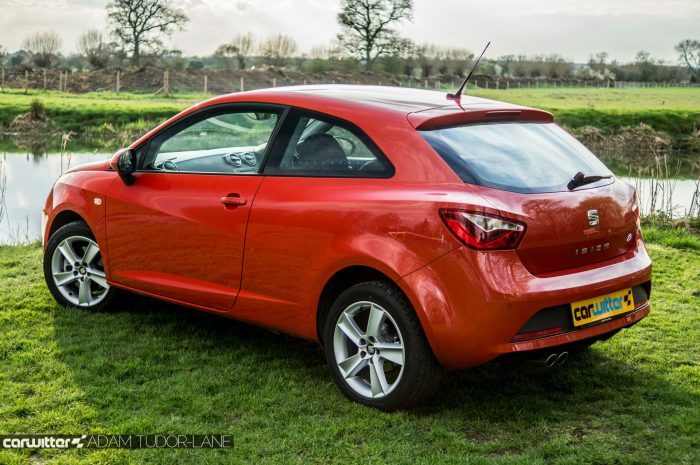 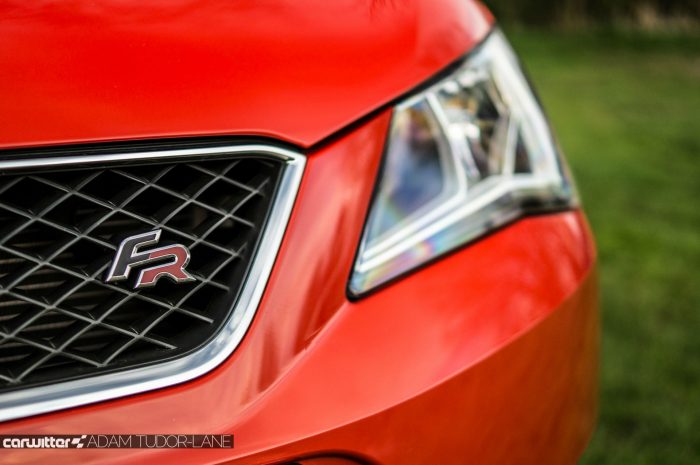 If I’m being honest I wasn’t holding out a huge amount of hope for the little 1.2 turbo. But as it turns out 108 BHP packs a healthy punch.

The TSi unit loves to rev high, even though peak torque comes in at just 1550 RPM you can really push it and receive healthy acceleration. Over 411 miles we never found it left wanting, there was plenty of poke to overtake when the chance arose, and the manual gearbox had a nice slick shift to it.

We also managed a fairly impressive 43 MPG over mixed driving conditions, which is actually better than the claimed 41.5 Urban rating – well done SEAT. 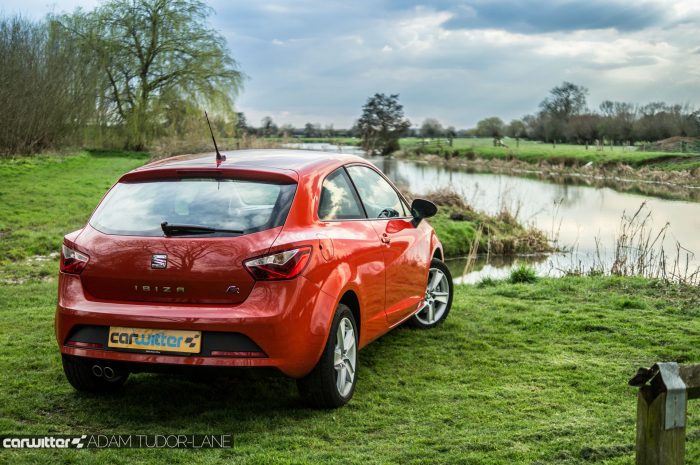 Handling wise, the FR is pretty tight, it feels darty and responsive enough to have some fun with. Body control can be a little on the wobbly side, but used in the right way that can lead to some interesting dynamics.

Ride is noticeably firm, broken sections of road transfer themselves into the cabin on occasion – even when fitted with the 16” alloys and the chunkier 45 profile tyres. 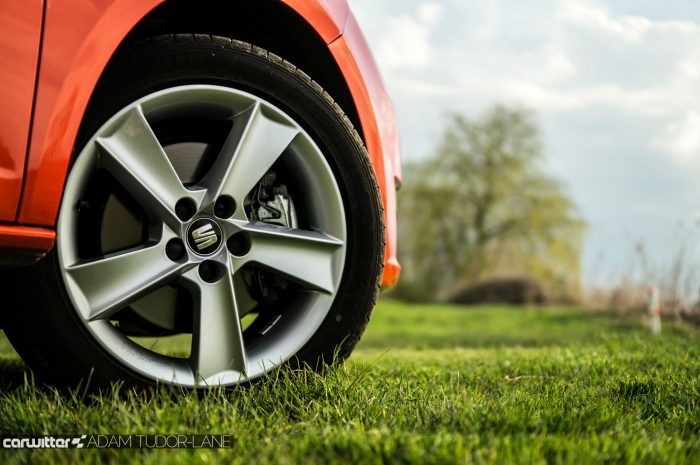 An ESP off switch would be good too. Instead you have to go through the menus to turn ESP off fully. Another sign that the FR is now just a badge. 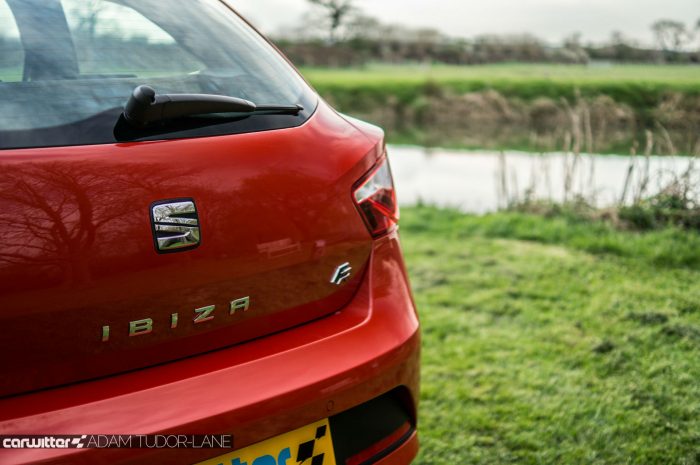 Thankfully the interior of the Ibiza has been updated since its debut. The latest iteration has had a full refresh of the dashboard…but it still looks rather plasticy, especially at this price point. 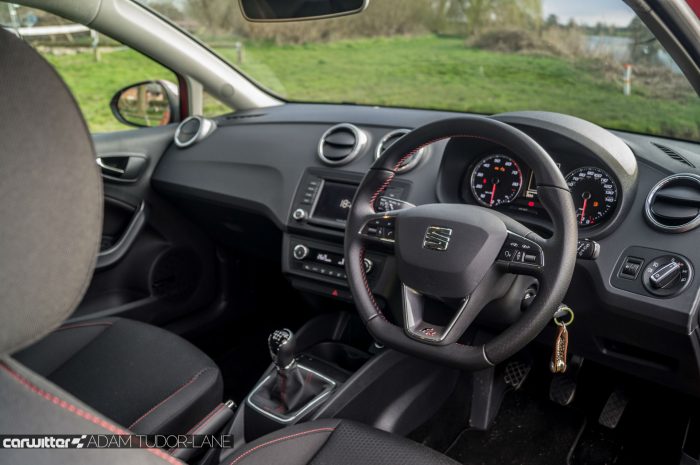 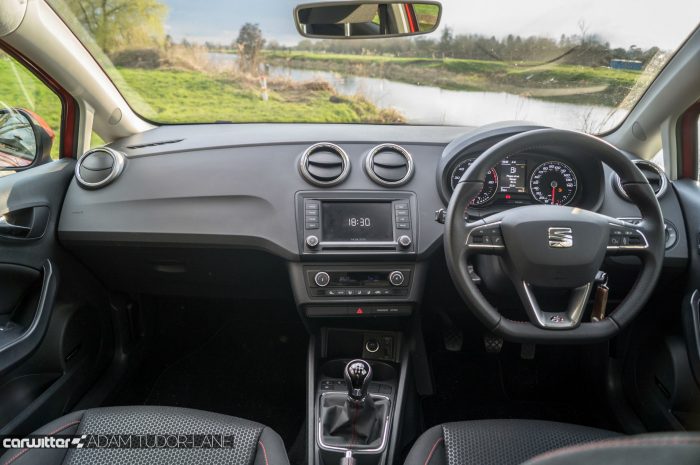 All the buttons and contact points have been swapped out in favour of a more Audiesque look and feel, which is a good thing.

There are quite a few button blanks though, more than we would like considering that the FR is the penultimate trim in the range.

A nice flat bottom wheel with red stitching is very Germanic. It adds a sporting touch and feels superb in hand. 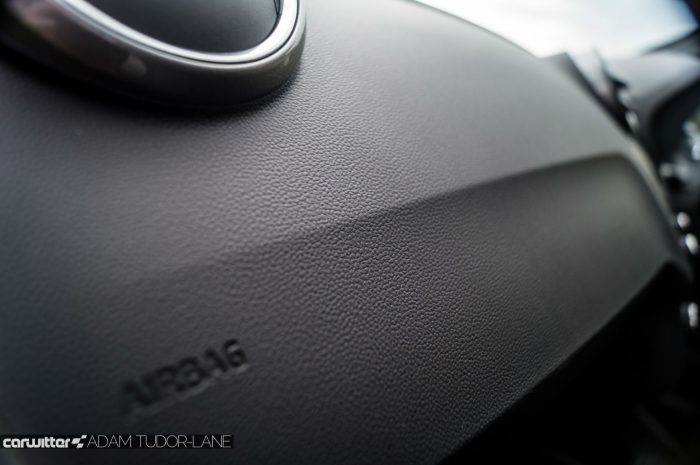 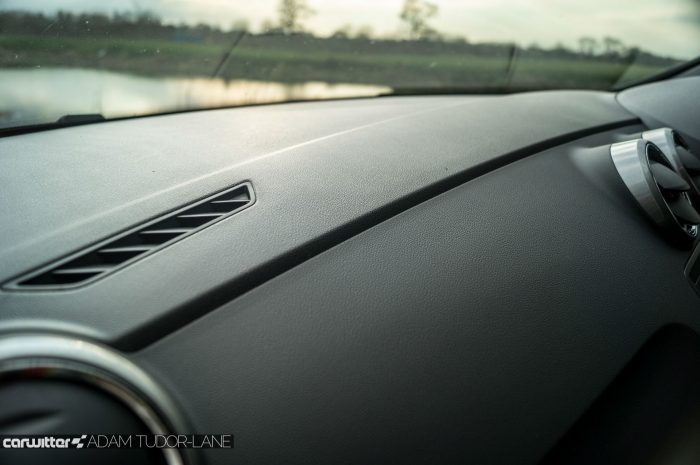 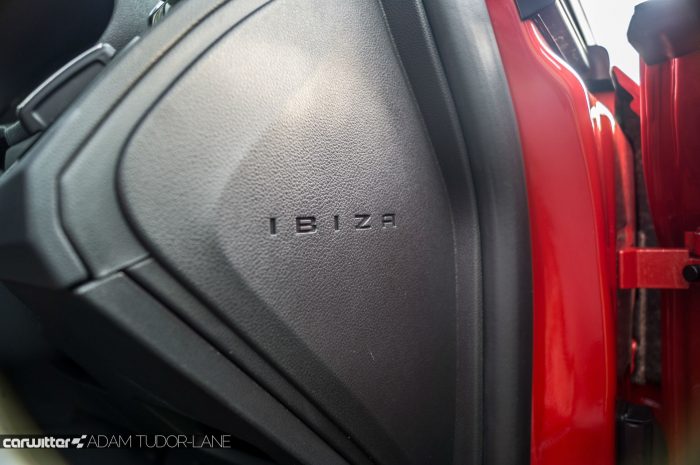 You also get a really high clarity sound system too. It’s made up of six speakers throughout the car and a spare wheel mounted subwoofer with a built in amp.

It has a decent kick to it, with deep seat shaking bass, and clear notes even at the top end of the volume. 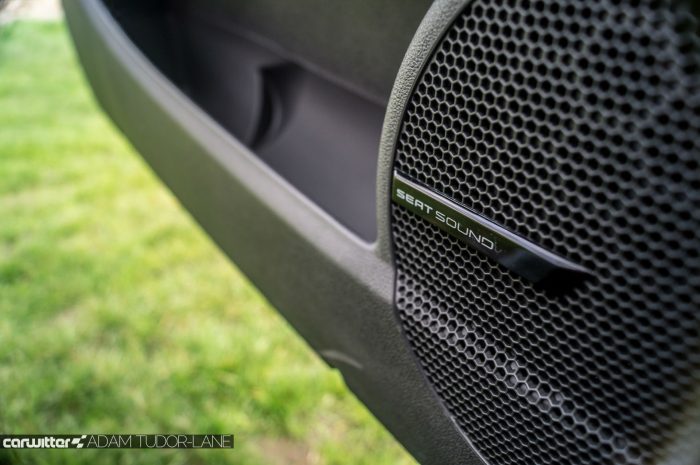 Boot space is a nearly comparable to that of a Ford Fiesta measuring in at 284 litres, jut 6 shy of the blue ovals offering. 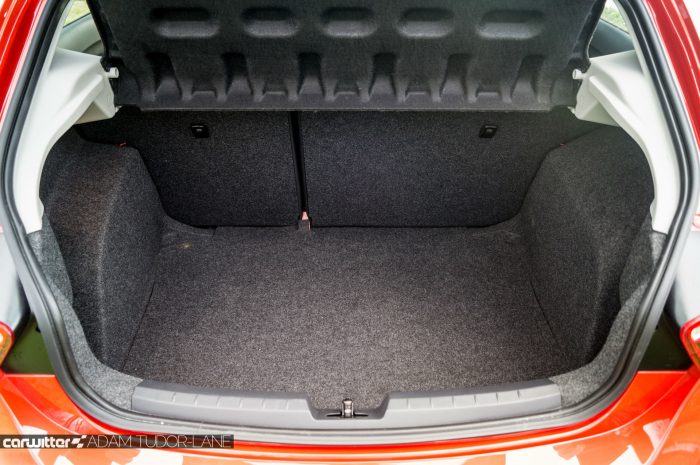 It’s kind of a shame that the FR badge has just become a trim level, but to compete with its brand brothers it needed to happen.

The 1.2 TSi has plenty of puff, it far outclasses the old naturally aspirated 1.4, couple that with the sportier looks and high levels of equipment and for a smidge of £14k it doesn’t look half bad. 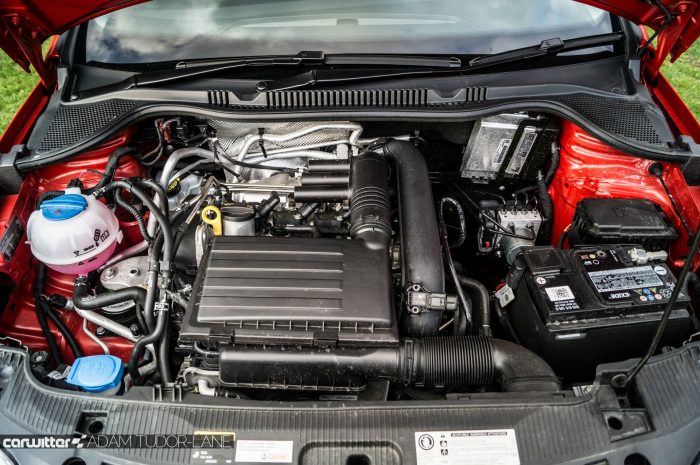 You can only spec the 1.2 petrol engine with 108 BHP in FR trim. So if you’re in the market for an Ibiza, and can afford the extra premium it’s well worth giving one a test drive.

It’s the perfect balance between performance and economy. 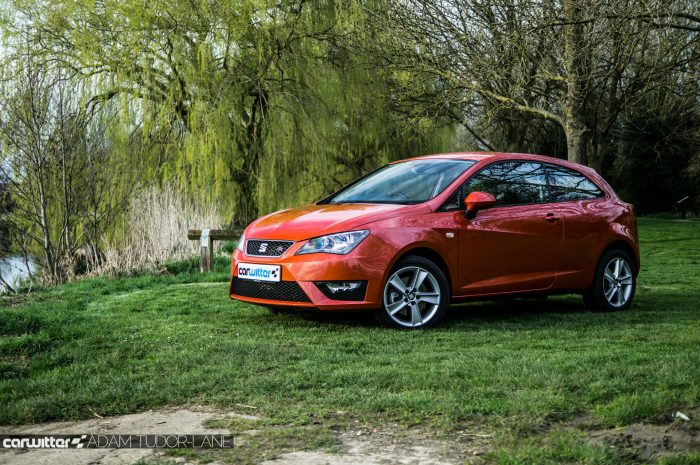 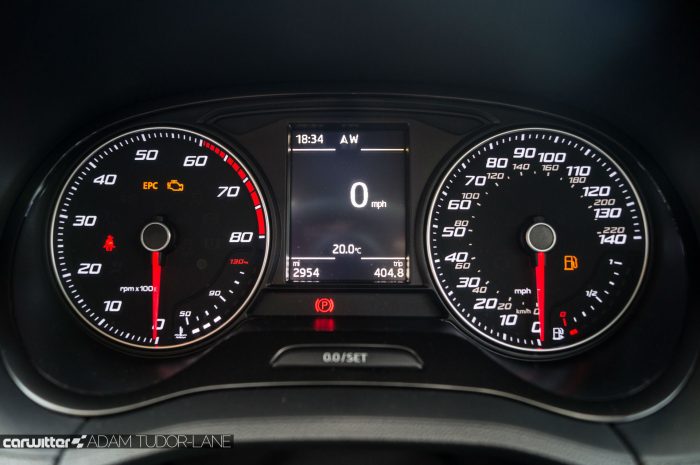 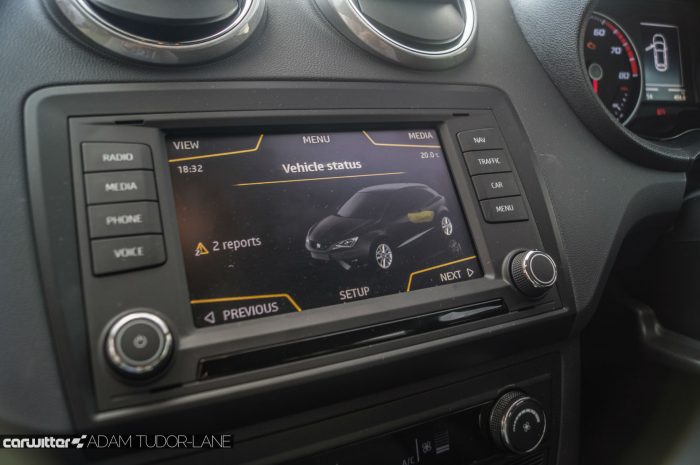 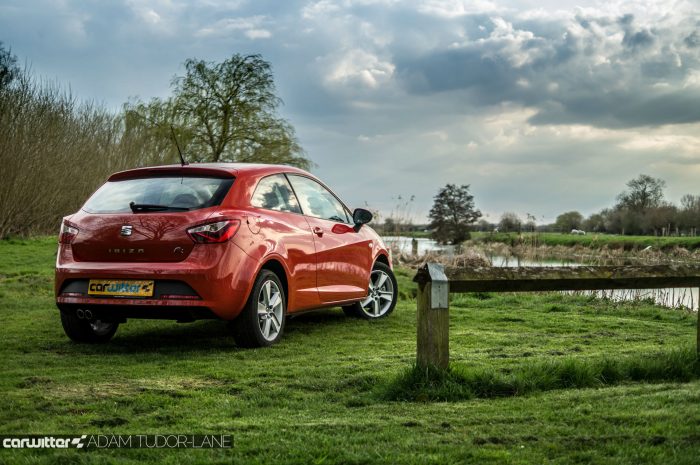