Mazda’s plucky little MX-5 is a legend, love it or loathe it. When it was released way back in 1991 it revolutionised the roadster marketplace.

Since then things became a bit wayward, the model strayed slightly from its core values. It became porky and more comfort orientated. The latest model aims to right some of those wrongs.

Starting at £18,495 our model was in the middle of the road SE-L Nav tim, with the more potent 2.0 litre engine. It also had the Safety Pack (lane warning, high beam control, blind spot monitoring) and the retirement red Soul Paint, in all it tipped the scales at £24,305 on the road. 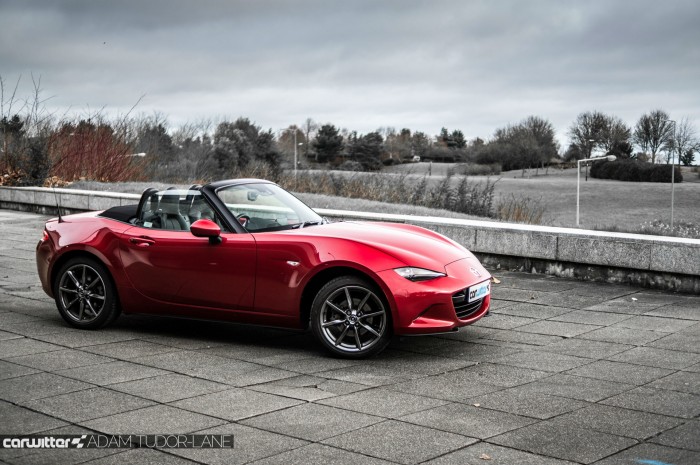 Gone are the round bubbly lines of the old MX5. Kodo design is in. That means sharp, angular lines met with sweeping curves.

It looks mean. It looks far manlier than it ever has done. Roof up or roof down it’s a smart looker.

The only nag are the indentations on the front and rear arches for the USA side running lights…two sets of bumper mouldings must have been pushing the budget a bit far. 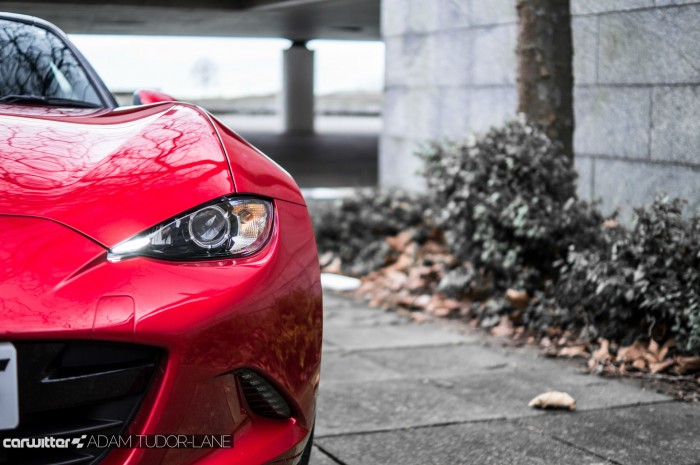 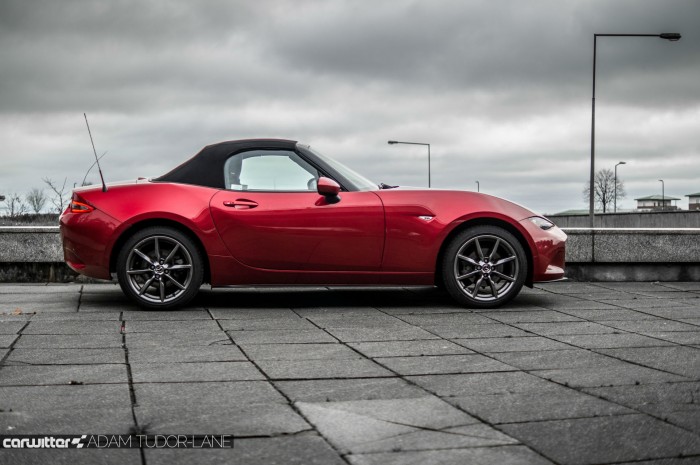 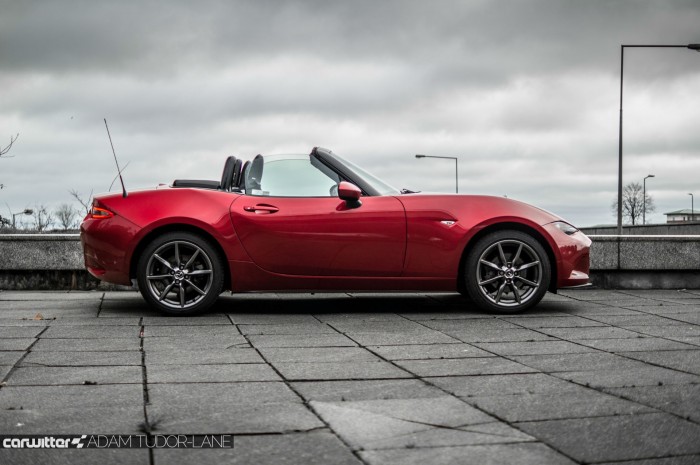 Mazda have made a big song and dance about cutting 100KG of weight out of this latest model. But depending on spec you can be slightly penalised on that. For example our model came in at 1260 KG, but a lower powered, lesser specced MX5 can become as light as 975 KG. It’s swings and roundabouts. 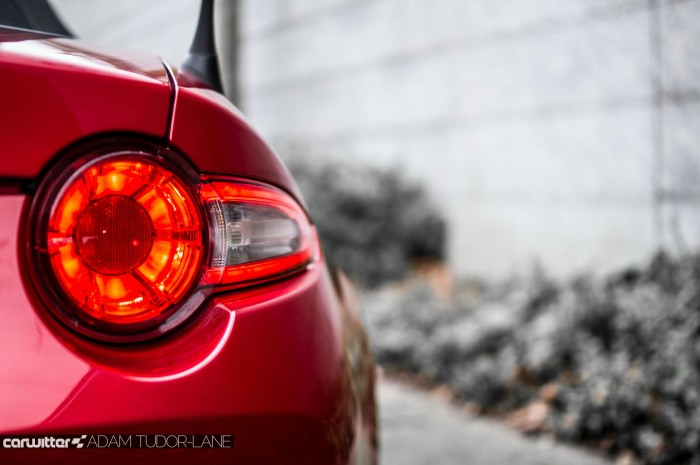 But driving this new MX-5 doesn’t feel vastly different. You can tell there’s less weight there, but it’s not feather light.

You notice it most when playing around with the car, breaking traction and controlling it you feel it is now far more manageable. It doesn’t turn on you as quickly, and it’s easier to catch when it starts to slide. But during day to day driving it just doesn’t feel like a revelation. 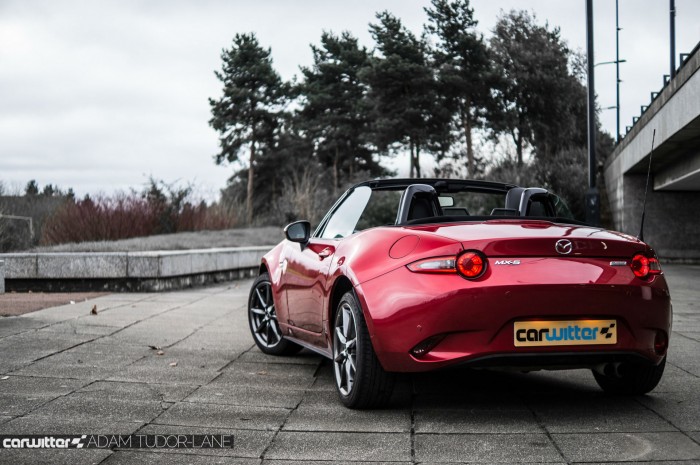 Mazda have reworked the 2.0 litre four pot. It revs right up to 7,500 RPM but feels a lot smoother, even initially starting it up you can hear the difference. That was one thing that always stood out about the outgoing model, it sounded thrashy. This doesn’t.

With the beefier 2.0 litre engine you get a nice limited slip diff at the rear which aids cornering no end. You can accelerate out of corners that you think may initiate a slide with ease, the diff spins up, grips and pushes you round. 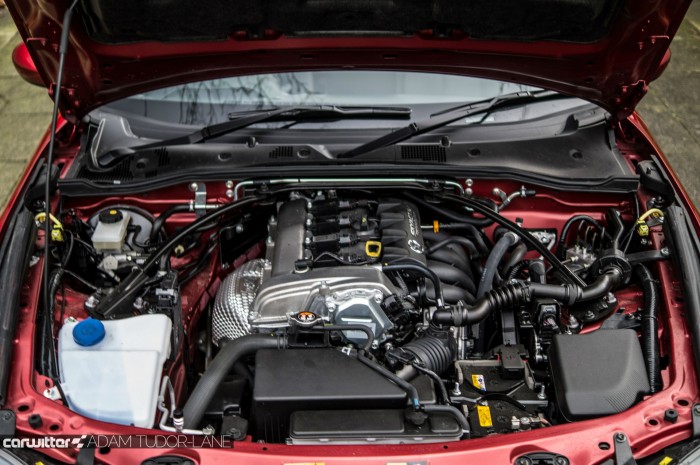 You also get a three piece bolted strut brace under the bonnet, which is a nice addition – and shows the development continued with the more powerful engine.

Steering is a little on the light side once in motion, but the accuracy of it and pin point nature are just perfect. Another added extra of the 2.0 litre are Bilstein dampers, they make for a very supple ride, imperfections are taken in their stride – no doubt helped by the chunky tyres. 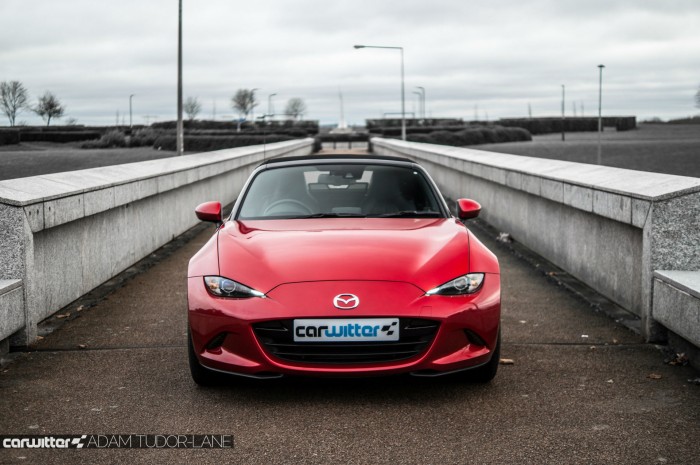 The MX-5 has always been known for its great gearbox and this is no different. Yes you have to work it to get the most from that engine, but its short, precise throws are a joy to use. Combined with some heel and toe from the closely gathered pedals and you start getting the sense that this is a real drivers’ car.

Inside the good news continues. Quality has taken a significant hike upwards with leather adorning the dash, nicer looking plastics and an infotainment screen standard on all but SE trim levels.

There is no glovebox now. Instead you get a cubby hole between the seats that is lockable…but only by removing the key from the keyless fob, putting it in the lock and turning it.

What a faff. No idea why it wouldn’t be electric with the central locking. 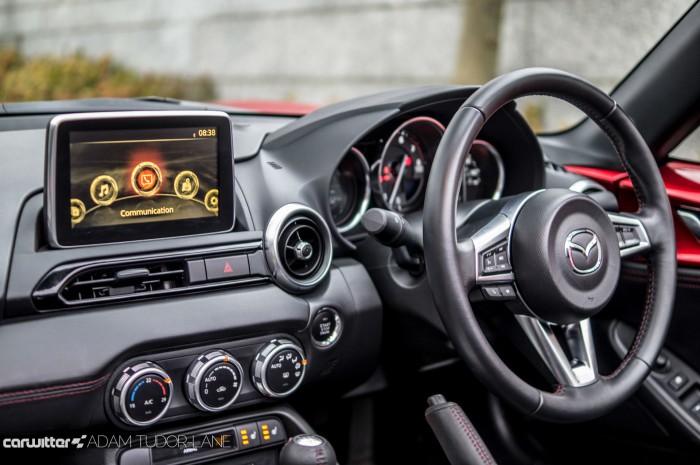 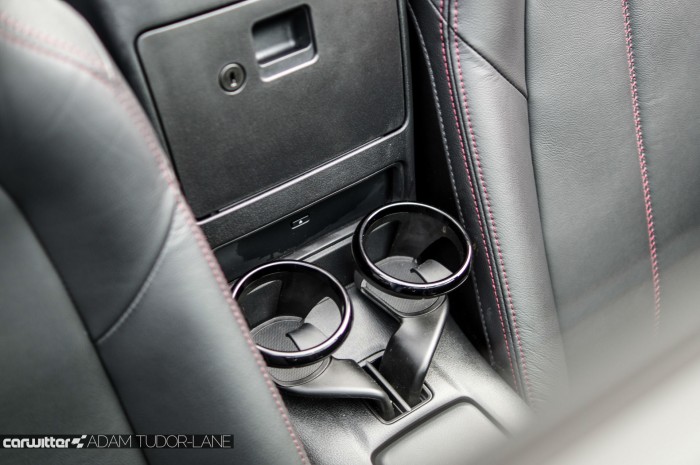 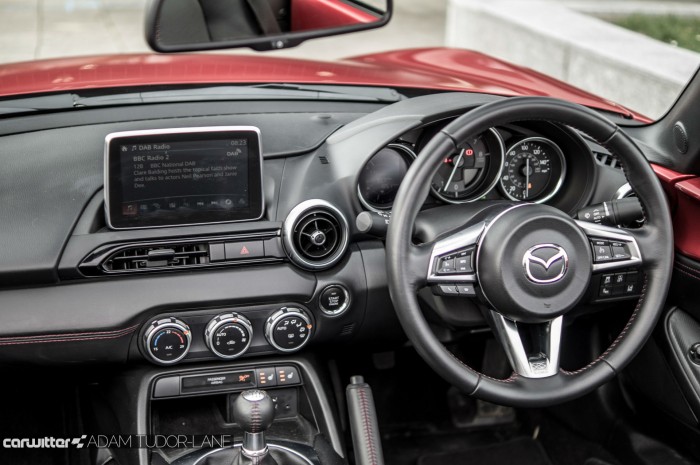 Also, when I first got in and looked around for the roof switch I was sorely disappointed. To save weight this is a manual affair, but it can easily be stowed and erected whilst sat in the car which makes life a lot easier. 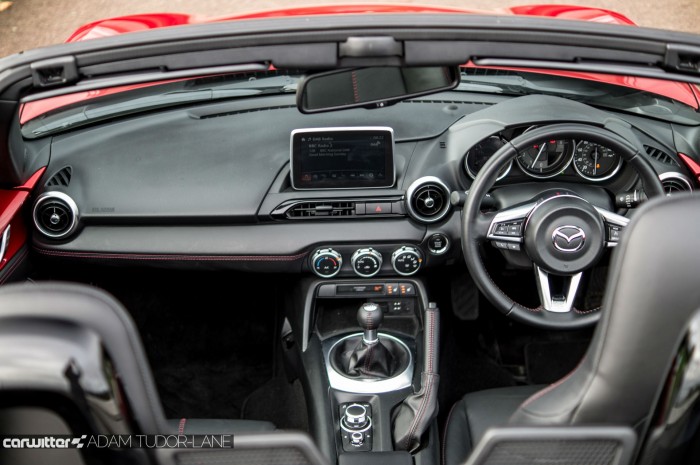 There is something that has always bugged me with the MX-5 though, and it still has the issue. Mazda have created this awesome little drivers car, it’s lauded over by so many and has such a massive following worldwide.

So why don’t they create a more hardcore version?! 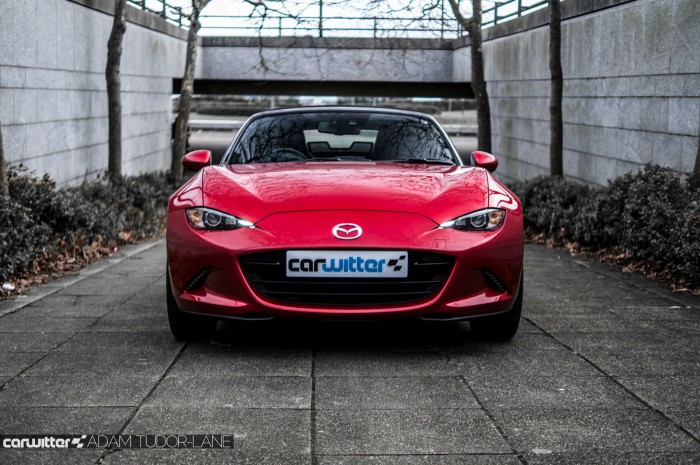 The latest incarnation is very good, and a big step up from the outgoing model. But make a trim level with no air con, the stereo can be optional…along with sound deadening. Fit stiffer, lower springs, widen the track slightly, add the option of a sports exhaust and up the power to a smidge under 200 BHP. PEOPLE WILL BUY IT!

I loved the Jota Sport MX-5 when I had for a week. To me it was everything the MX-5 should be and I still think Mazda are missing a trick… 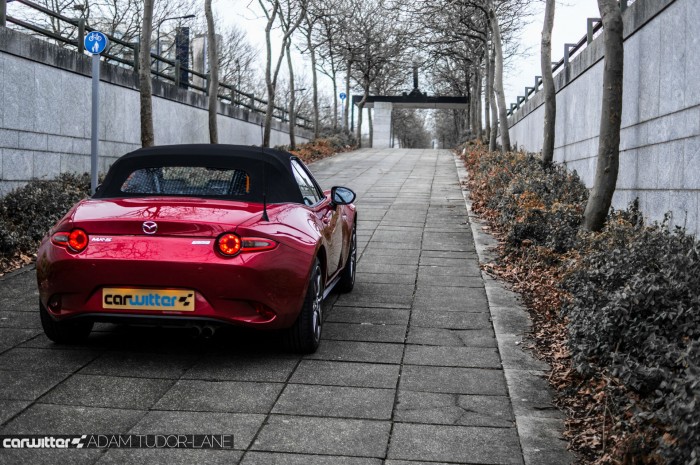 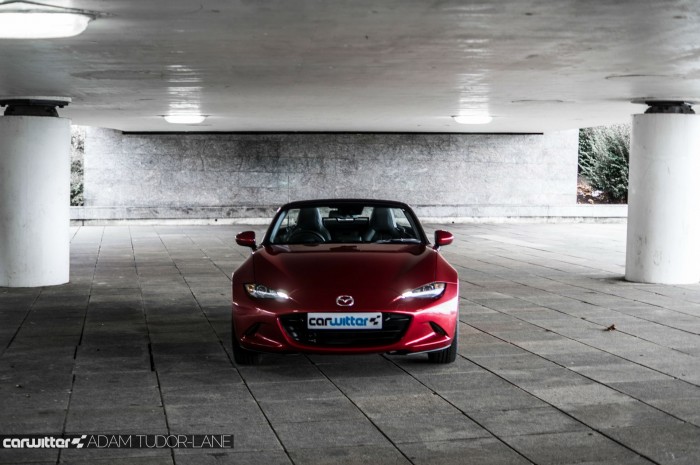 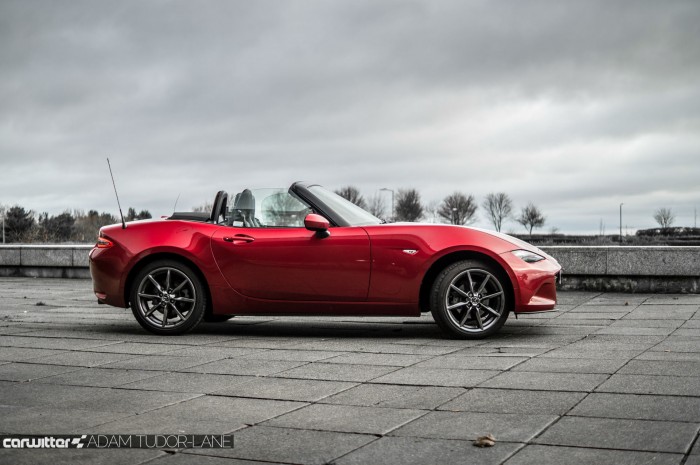 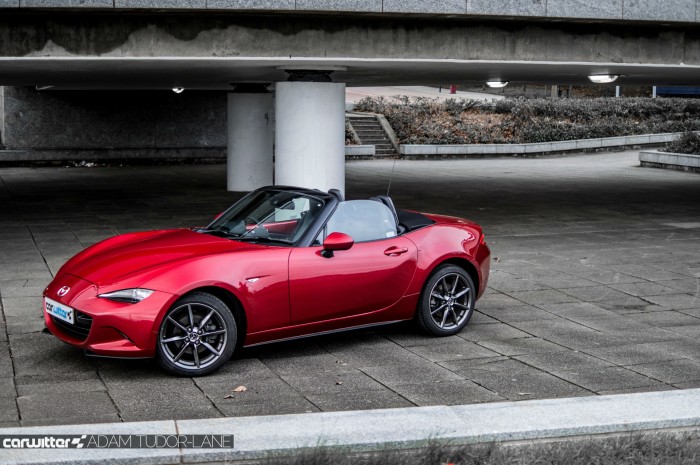 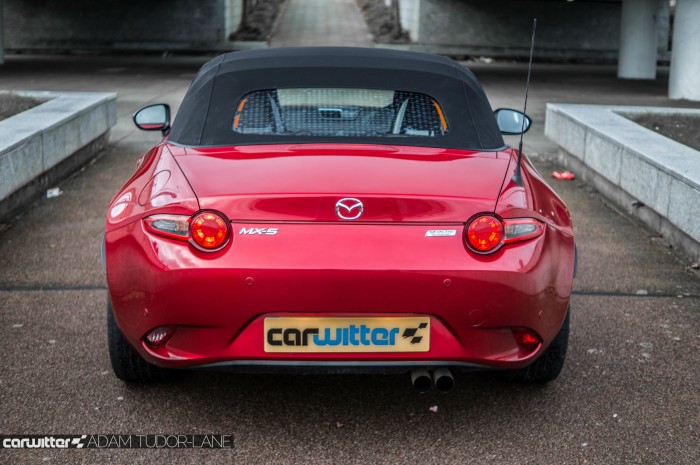