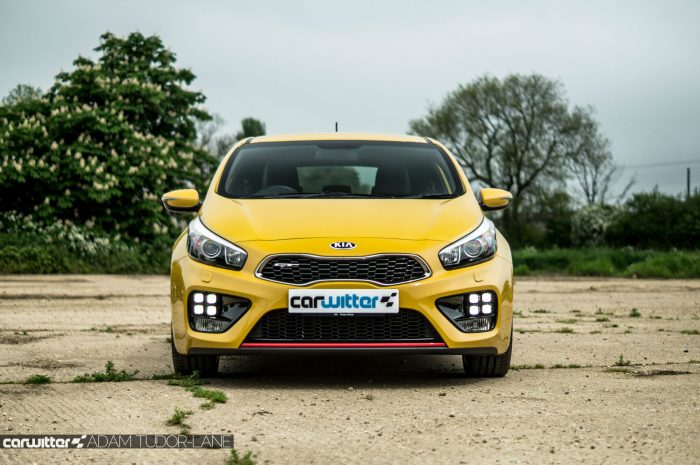 Kia’s first stab at the hot hatch market was a welcome addition to the segment, they pretty much nailed all of the key points.

This year they have given it a mild tweaking just to keep it fresh, we took a Yellow Flame model for a spin to see if it’s still a winner.

Kia have now ditched the entry level Tech trim, you now just get the ‘GT’. Starting at £23,110 the only optional extra would be the metallic paint at an additional £510. 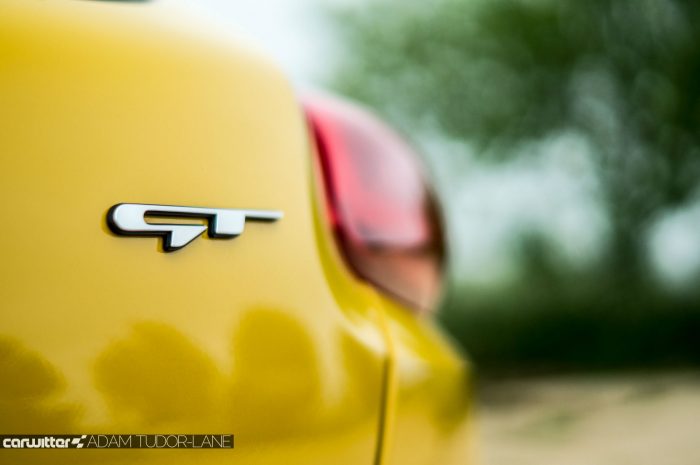 You could really play a game of ‘spot the difference’ between the original GT and the 2016 model, that little has changed. 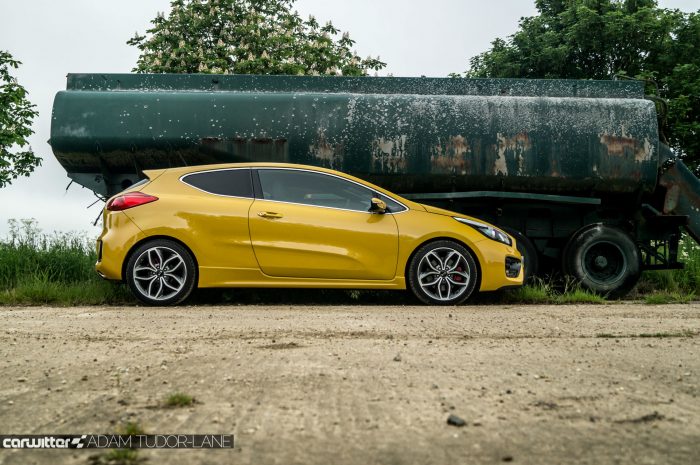 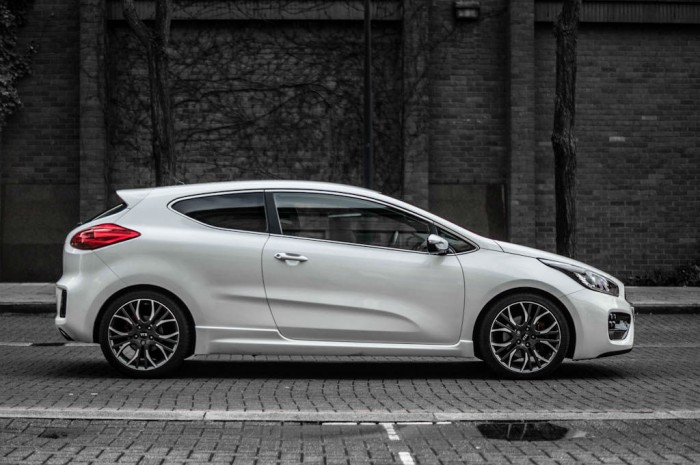 Side on the sill mouldings become a little bit cleaner, and the alloy wheels have been updated to a much blander design.

The rear lights also get a slight tweak with a new illuminated oval taking the place of the kinked C on the first gen models.

Apart from that, and the new divisive ‘Yellow Flame’ colour that’s about it! 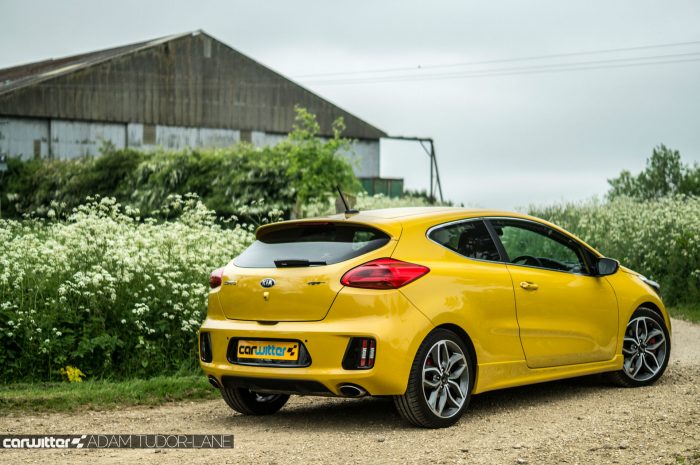 Now the Ceed is a C segment car, so this pits the GT against the formidable Golf GTi…thankfully it doesn’t disappoint!

Kia developed the GT over 480 laps of the Nordschleife, that’s over 5,000 miles worth of track action. It was worth it though… 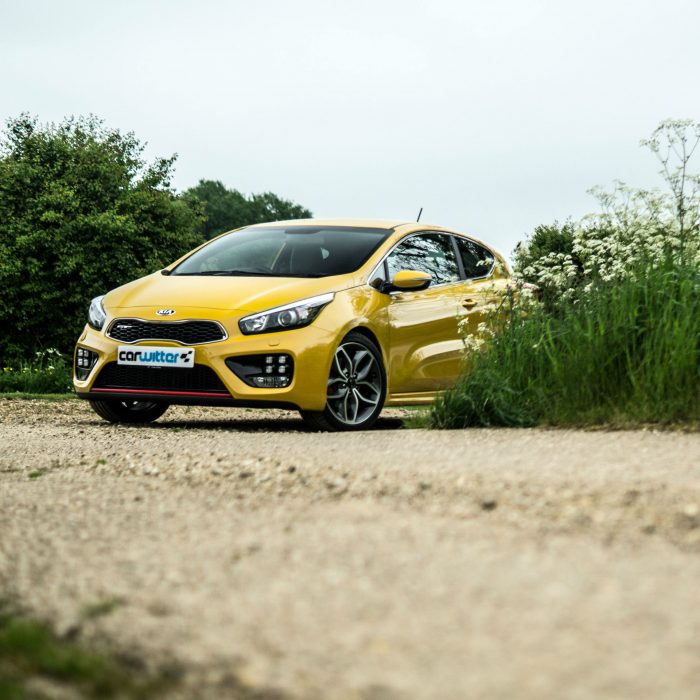 Pin the throttle and you are pushed back in your seat by that 260 Nm of torque. At any speed it pulls superbly, once into those higher gears the torque grows slower, so if you really want blistering pace for an overtake its worth knocking it down a gear.

But if you have the time, be lazy and keep it where it is.

When you do put your foot flat to the floor you are met with an aural delight, a throaty roar that builds along with the revs.

Over the engine you can hear a fairly muted exhaust note, it would be nice if this was a little more visceral and engaging. 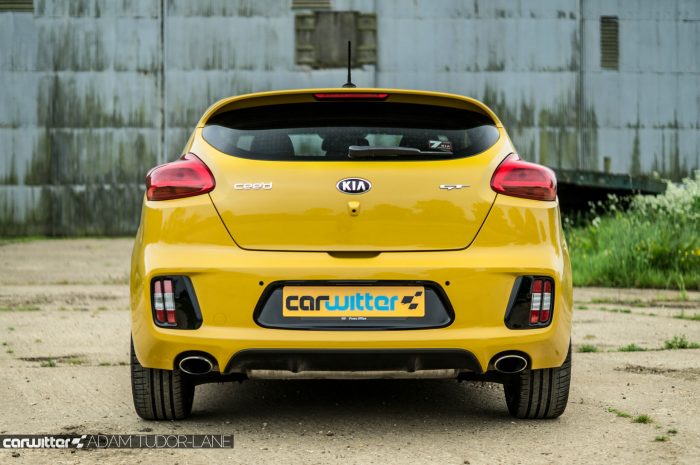 New for this year Kia have added a fake engine noise…maybe to make up for the lack of exhaust tone. It becomes enabled when you hit the GT button that has now been moved to the steering wheel. It’s really gimmicky for the enthusiast, and totally not needed.

Handling is very sharp for such a large hatch. Steering is direct and instantaneous, it’s still lacking any sense of feeling which is a shame, but you can forgive it that.

Ride is firm, you will feel the road through the chassis but then that’s what a hot hatch is all about. It has actually been retuned to increase that firmness over the old model. 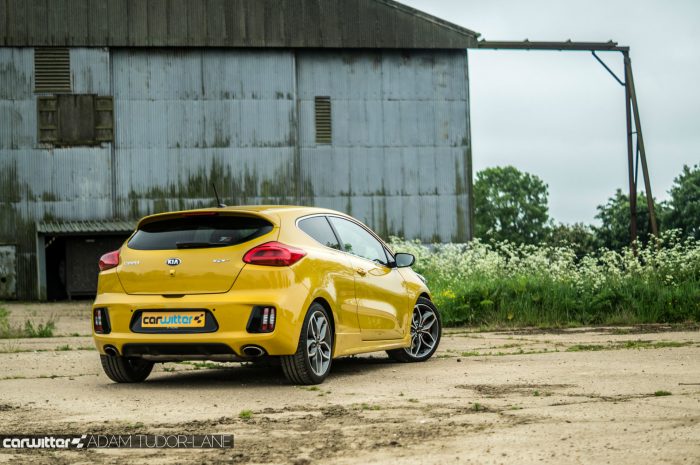 Corners are handled with aplomb, it stays flat but powering out in the damp or wet can cause wheelspin.

In fact that can even happen in a straight line up to second gear when the pedal hits the floor. In that respect the Pro Ceed could do with a limited slip diff…It’s best to ease the power on gently in those less grippy conditions!

Once again the changes on the inside are modest. You now get a gorgeous flat bottom steering wheel, which is a tad fatter than the old model, and as mentioned earlier now has the GT button at your fingertips. 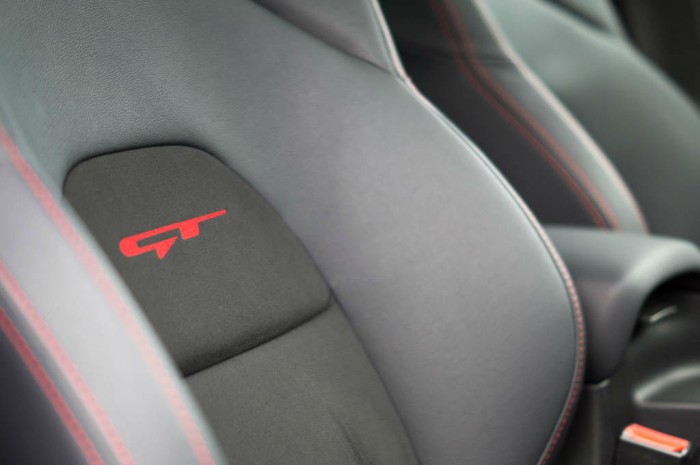 You still get the Recaro front seats, these are proper performance jobbies. Deep and hugging, they hold you perfectly and are oh so comfortable on longer journeys.

Sat nav is now standard, as is a reversing camera…but that means you have to have that awful sticky out rear ‘nose’ that ruins the rear lines of the car. Surely it can be mounted under the rear spoiler or by the numberplate?! 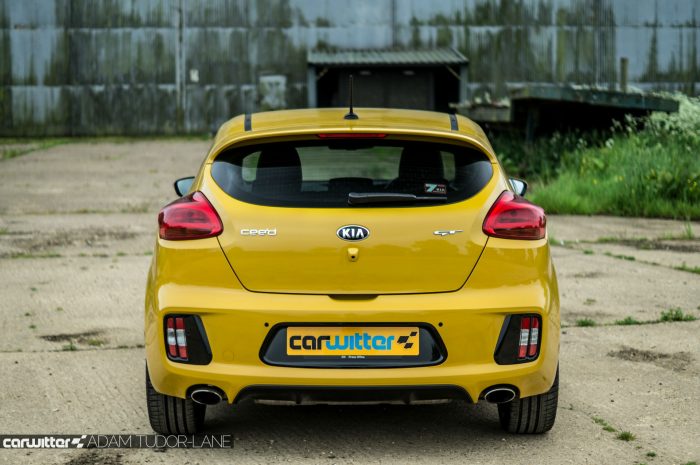 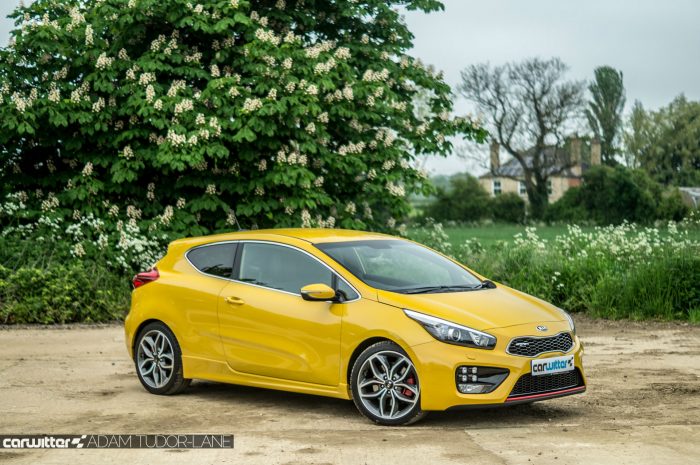 The price may have gone up from a basic of £19,999 which is a shame as the basic GT was great value for money.

With the level of kit now being offered it still makes for a competitive argument, but when it was under £20k it looked like a bargain, now it may take more careful consideration. 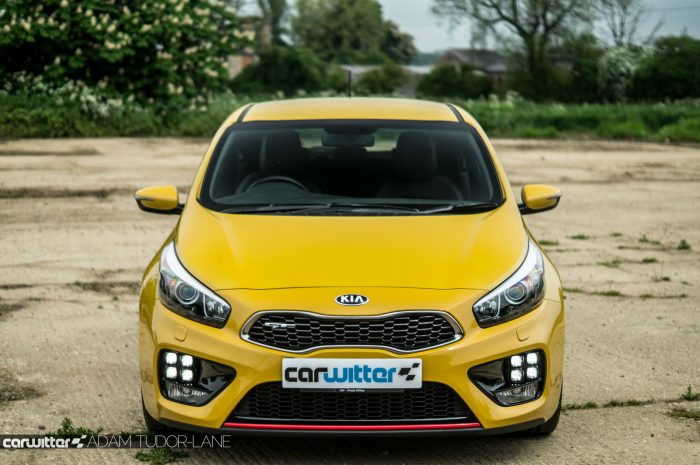 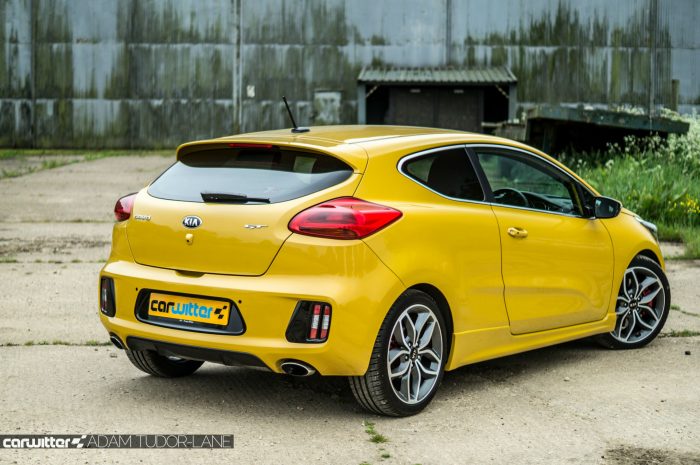 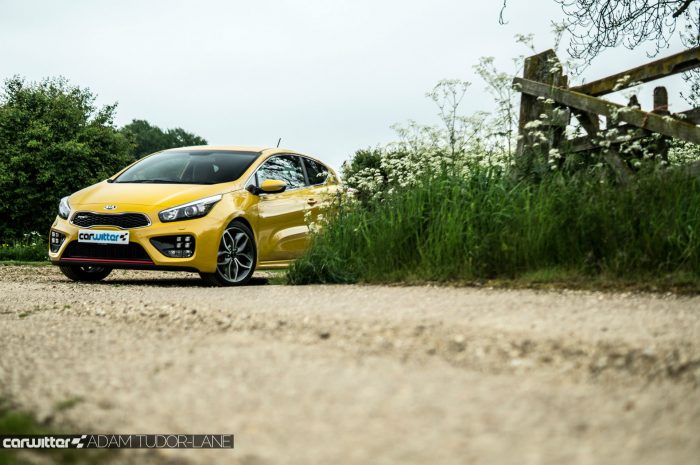 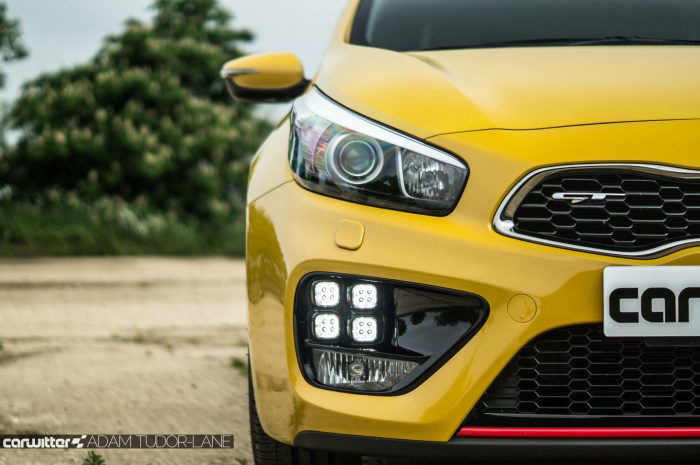 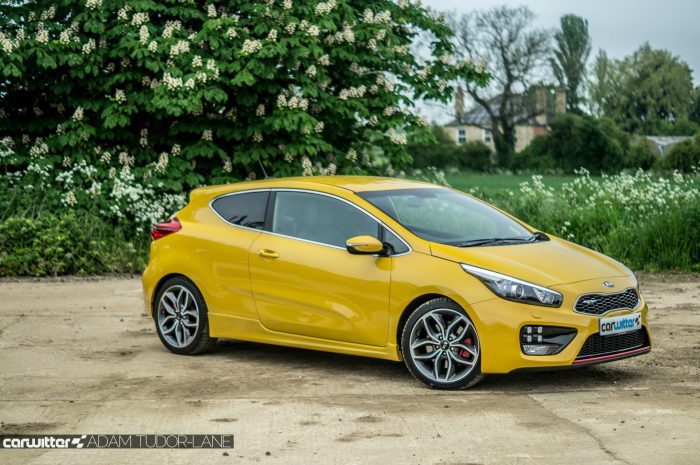