Honda’s NSX is a legend. Every petrol head knows the story behind the original, even today they are still lorded as a superb driving machine. It had a production run from 1990 to 2005, showing just how cutting edge it was for the time.

But the second generation has been a long time coming. Initially it was announced back in 2007, with a launch date of 2010, but nothing ever came of it. Again in 2011 rumours started that an NSX successor was on the way, finally being unveiled in 2012.

Four years on and I’m sitting in one, key in hand. 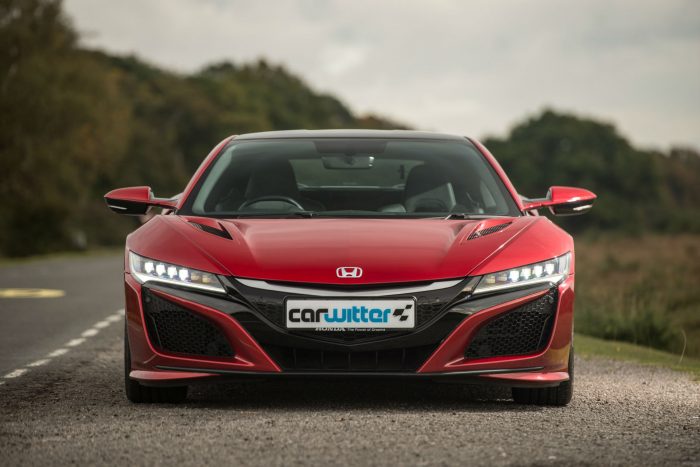 Starting at £143,950 that’s a fair old chunk of money considering the competition in that price bracket.

By the time the original NSX stopped production in 2005 it cost around £62k for the Targa model, convert that price to today’s rate and you would be looking at £83,507 and 19 pence. 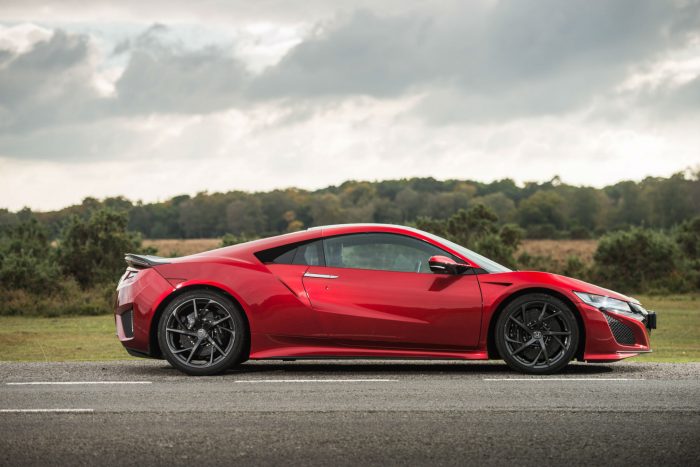 However, there are an additional three electric motors shoehorned into the NSX, two are coupled to the front wheels and sit just underneath the bulkhead, whilst the third is centrally mounted and incorporated with the 9 speed DCT gearbox. 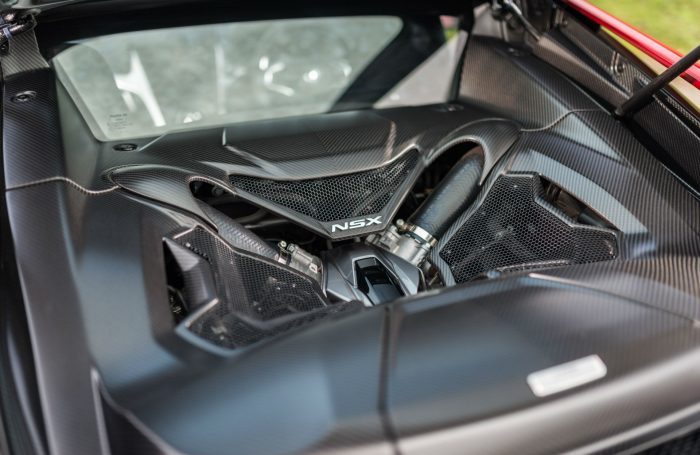 From the outside the NSX looks incredible.

A cross between a Transformer and pure concept car, there’s simply nothing else like it on the market. Those angular lines that intersect across its bodywork stay pretty much true to the original 2012 concept.

There have been a few tweaks here and there, more vents for cooling the 10 radiators housed beneath its skin, flying buttresses have been added to help airflow and downforce.

But what you don’t realise from pictures is just how wide it is…this thing nearly takes up a whole lane on the road, there isn’t much give or take with the white line. 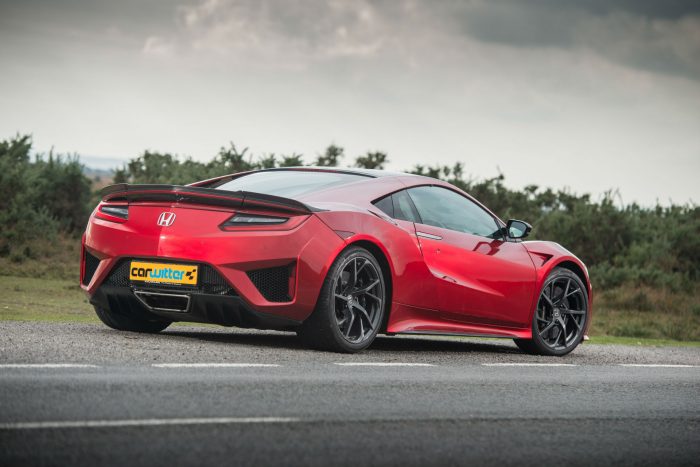 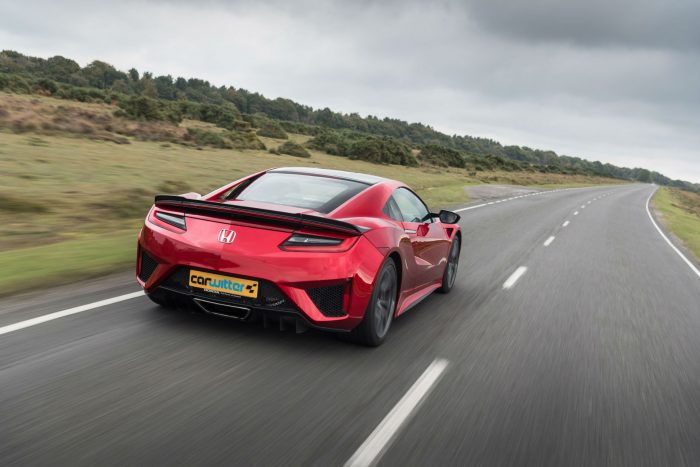 That’s partly down to the American styling, even though the initial design was created in the Wako studio in Japan, the Acura team in LA made tweaks for the road going version.

Saying that though the overall car is very compact, short front and rear overhangs mean the body wraps tightly around the space frame beneath. 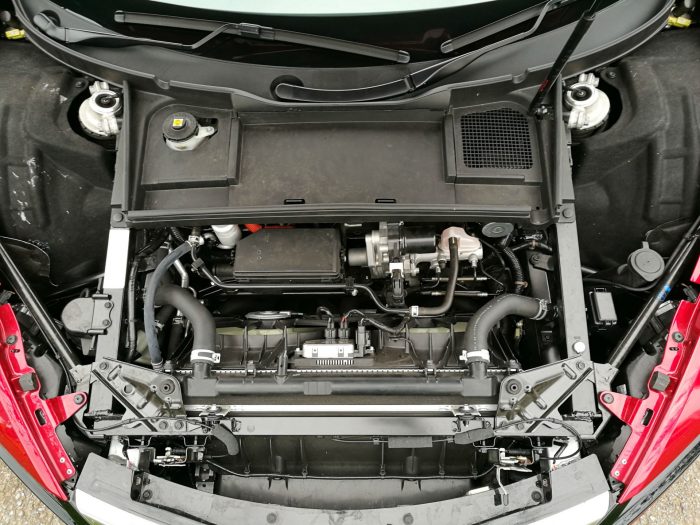 Under the bonnet you find a myriad of looms, motors and air conditioning rads. You also see the square space frame construction in its bare form.

A welded metal square sticks out of the cars’ bulkhead. For £150k it looks a little Heath Robinson, more like a race car than a supercar.

But due to those front and rear sub frames the overall rigidity of the NSX is up to three times stiffer than any of its competitors – which is an impressive feat. 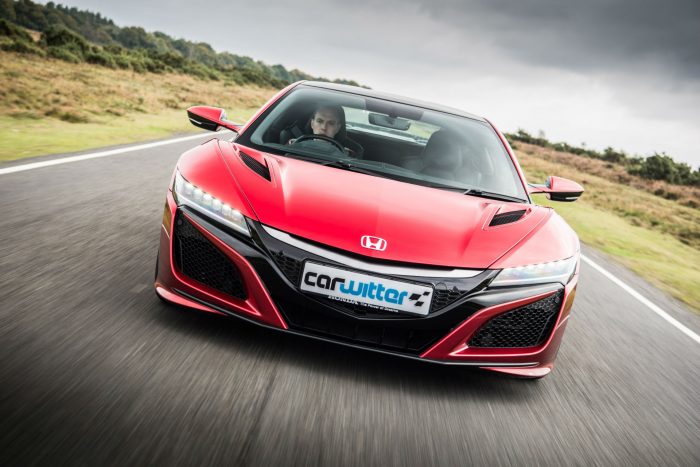 Acceleration is without doubt supercar quick, and thanks to the four-wheel drive it really is point and shoot, stupidly simple to drive with acres of grip at your disposal.

Gear changes are pretty rapid in auto, shifting up right before the red line, but the real magic happens when you’re in manual. With rifle bolt pace you can rattle up and down the gears, pulling on the paddles gives a resounding click with the number changing on the dash in an instant.

There are four different driving modes to the NSX, Sport is the default. Quiet will prioritise the electric motors as much as possible with the engine mainly off, whilst also quietening the exhaust.

Sport+ is the more aggressive in every sense, increasing the aural exposure and letting the engine running all the time.

Track mode turns everything up to 11, including the steering and suspension settings. All of this is controlled by the large central dial in the middle of the centre console. 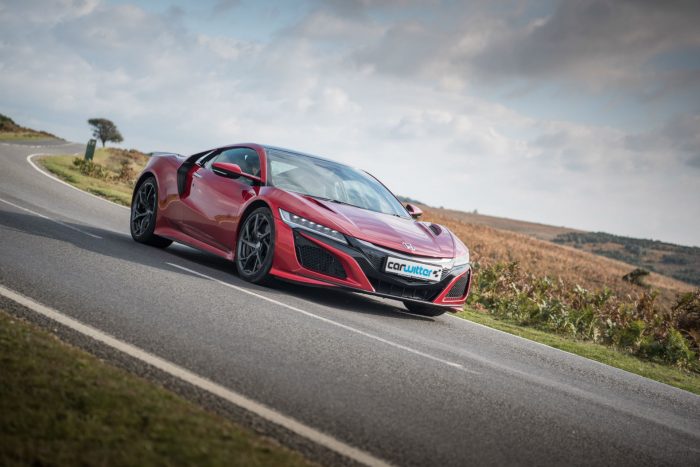 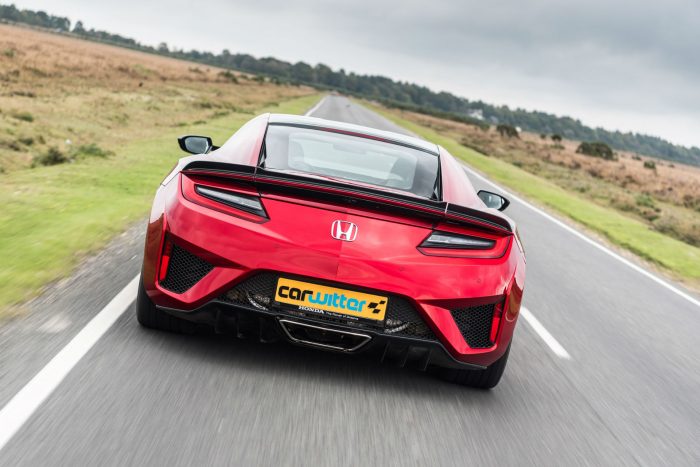 Driving along in Sport you really would think you’re in a comfy saloon. It takes lumps, bumps and potholes in its stride, never feeling tiring…but blistering pace is but a blink away even when it needs to change down from 9th gear.

Changing into Sport+ and the NSX really comes alive. That V6 mounted behind you perks up and bursts into song under acceleration.

The steering is just so darty and nimble with even the smallest of touches resulting in the wheels changing direction. Normally when a cars’ steering is this good it ends up becoming ultra-twitchy, constantly having to be corrected – but not in the NSX. 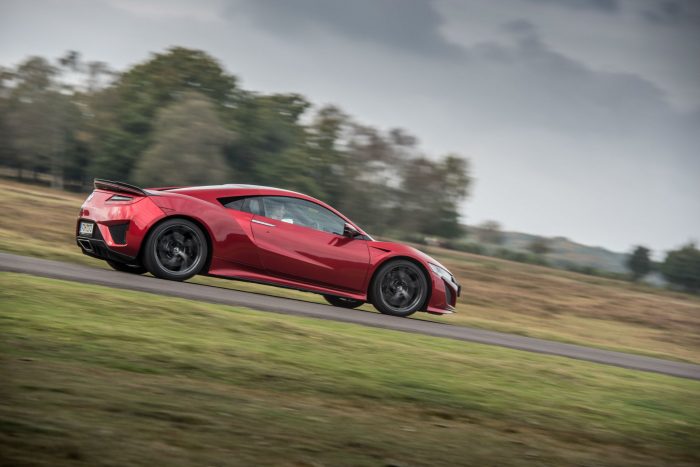 Weight balance is 42/58 front to rear, with a hefty amount of downforce over the back wheels negating the need for any trick active aero.

There’s no pitch or roll to be had, even rapid changes of direction whilst under acceleration won’t unsettle the Honda. It stays flat, and glued to the tarmac, it actually has the lowest centre of gravity among its core competitors. 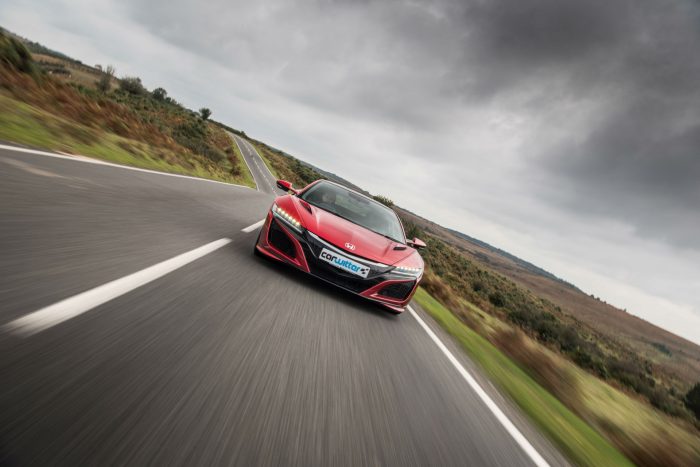 Braking is handled by the optional Brembo Carbon Ceramics, but they feel far more like normal steel jobbies. There’s a nice, modular, progressive feel to them, rather than the digital On/Off response you generally get with race car spec stoppers.

This allows you to be brave braking deeper and later into corners. Coupling that with Sport+ and manual mode you’re led into an ever quicker flow turn after turn. 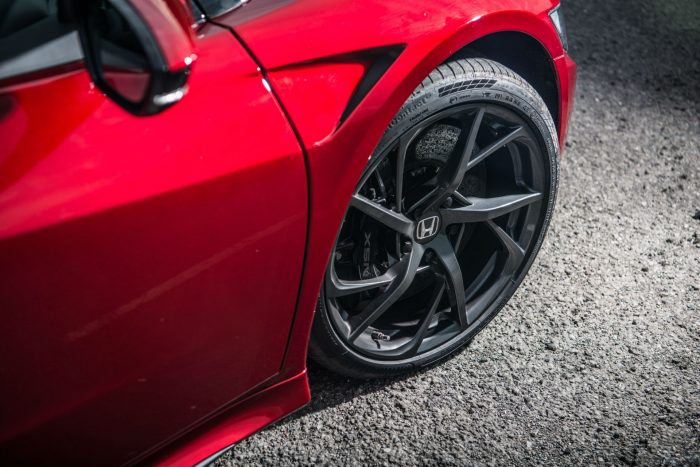 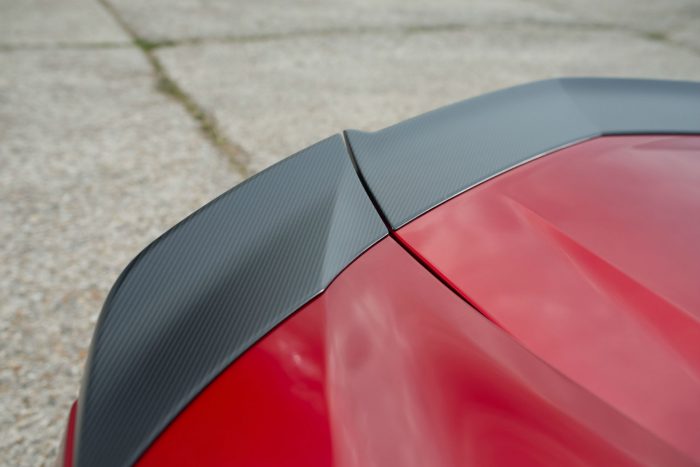 It doesn’t feel kill yourself quick, it feels manageable, and in that sense it’s completely the embodiment of the original NSX. Anyone can drive it and get their best out of it, safely.

The electric wizardry slotted into the NSX gives you torque from very low speeds. Even though the hybridisation of the NSX is on a small scale, it enables the car to torque fill the gaps in the petrol engines power delivery.

On the dash you get an ‘Assist’ and ‘Charge’ meter. Braking charges, and under acceleration you get a push in certain places from the electric motors.

It’s not even noticeable but when you stop to think about it, it feels very Tesla in its delivery, linear and always there when you need it. 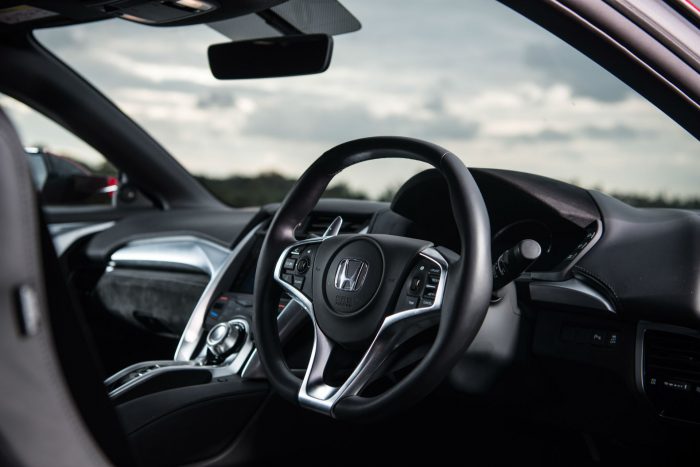 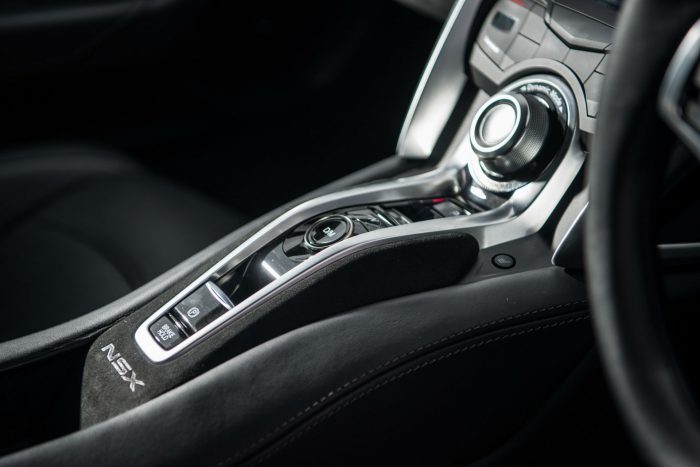 Inside is pleasant enough, the seats are comfy and there’s some gorgeous Alcantara detailing along the central tunnel.

Switches feel sturdy enough, the glovebox has a really odd sticky-out shape to it, and the square steering wheel handles wonderfully due to the short lock to lock ratio of the rack. 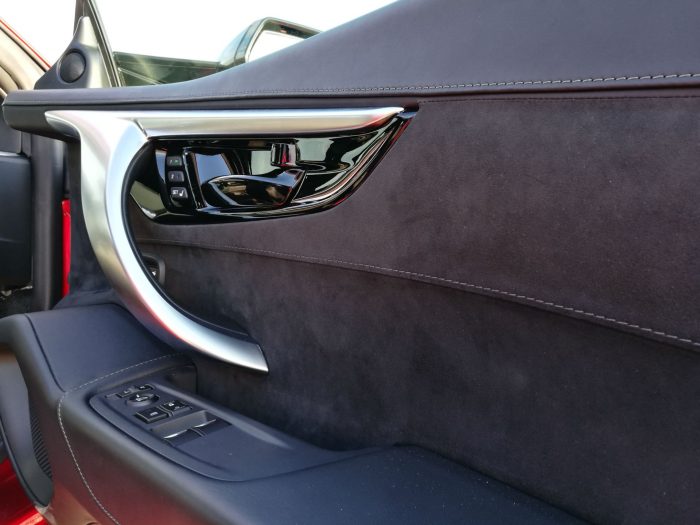 But there are parts that let it down. There’s a section of honeycombing on top of the dashboard that forever reflects in your vision, the door handles are gloss black plastic and feel as if they are out of a Jazz, and it maybe doesn’t feel special enough overall. 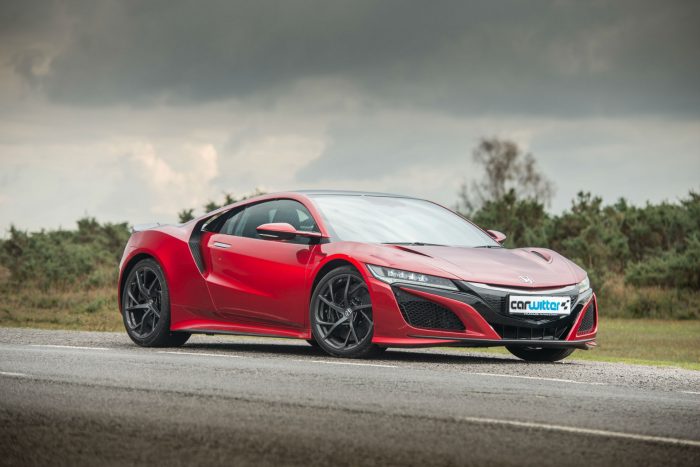 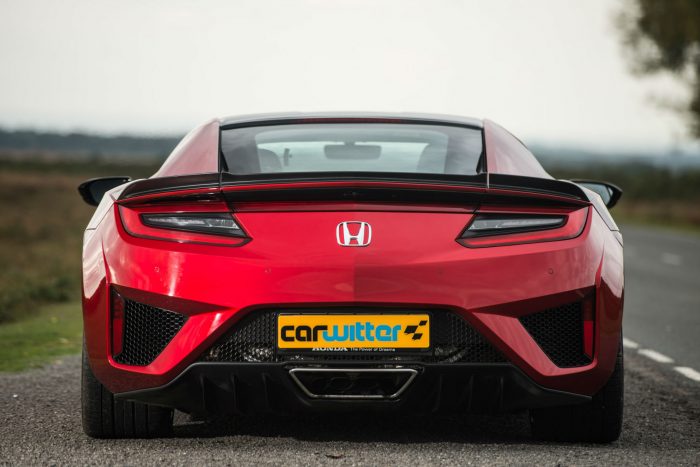 It’s taken a long time to get the second gen NSX on the road. It was never going to be the original as times change. Much as the Peugeot 205 GTi captured hearts in the late 80’s it has never been repeated by the brand itself.

Honda have offered a new take on the supercar, delivering hypercar tech at an affordable price with its unique hybridisation.

But is it needed? Personally, I doubt.

There should have been two NSX’s offered up to the market. One with the hybrid tech, one without…and purely rear wheel drive.
That would have helped lower the cost, lower the weight yet still give a superb driving experience.

When you’re looking at the thick end of £150k with options, I know where my money would go. 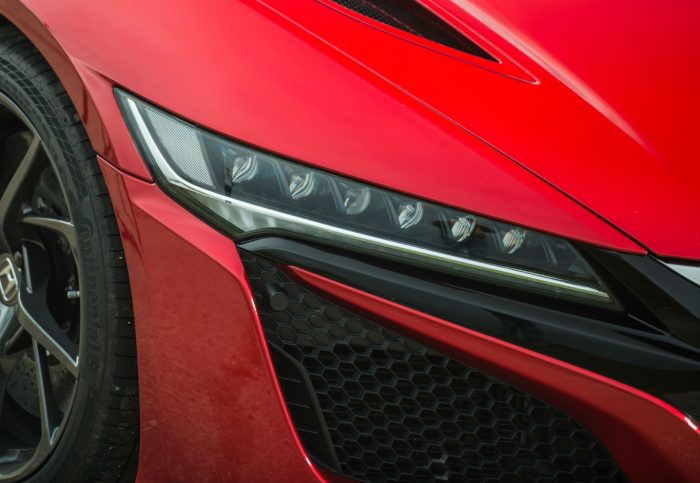 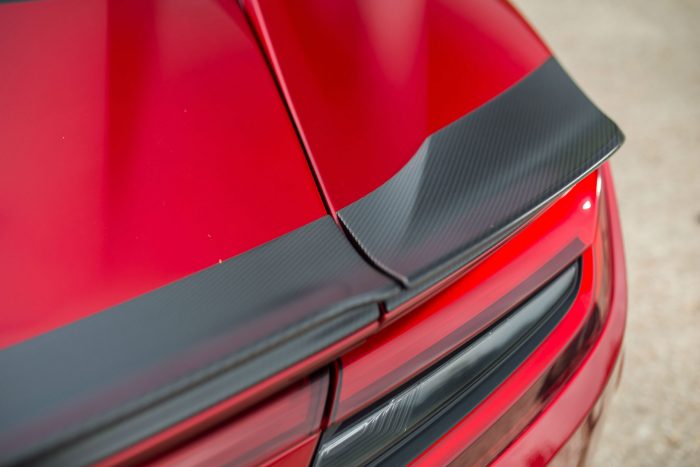 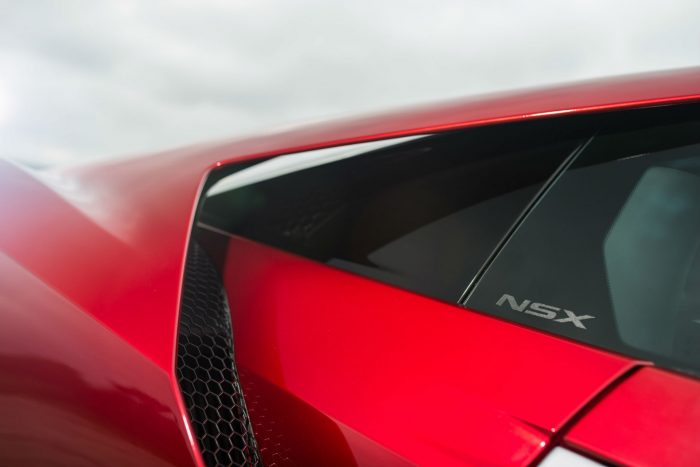 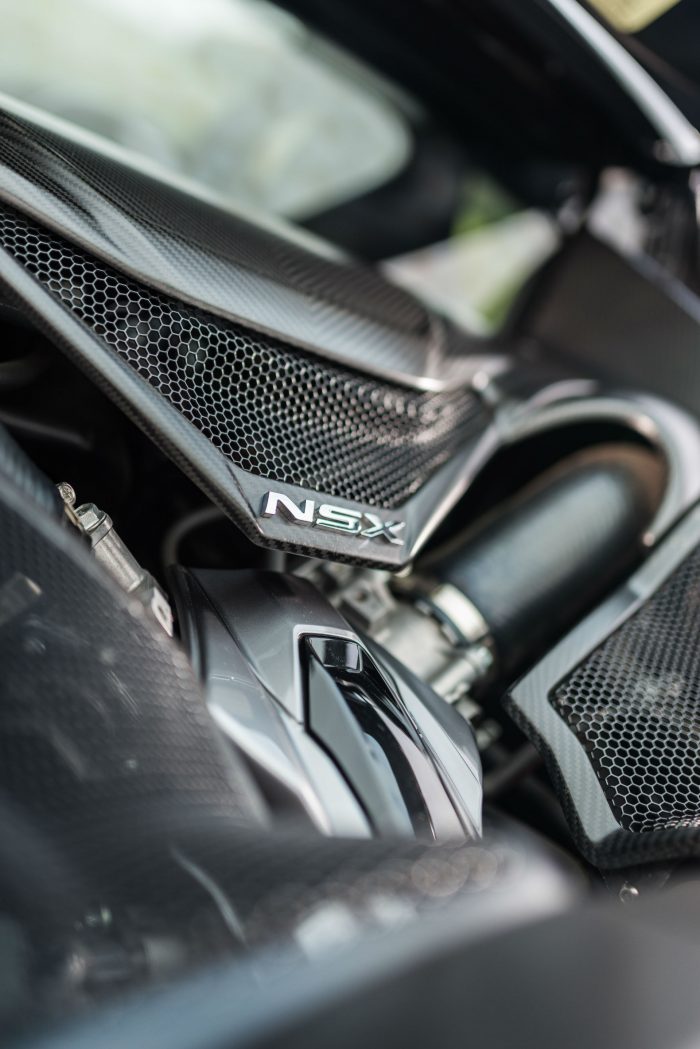 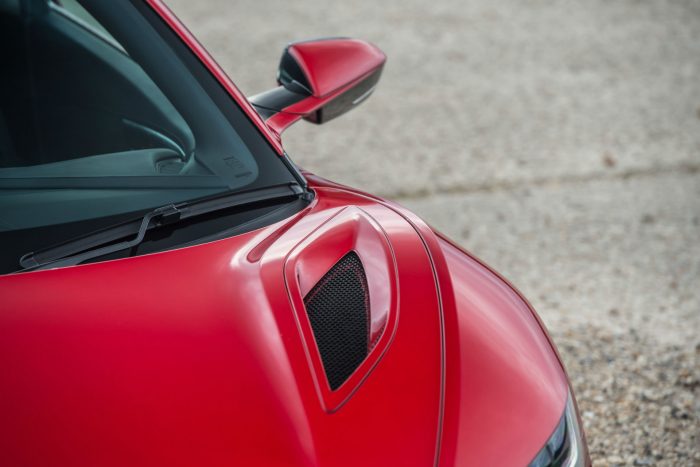