Can there be such thing as a luxury hatchback? DS Automobiles would fervently stress, “yes!”, before adding the appendix “but the new DS4 is not simply a hatch. It is a four door coupe with hatch qualities!”.

We don’t need more niche segments, thank you very much, so I shall take the DS4 for what it actually is: a plusher, less boxy French C segment hatch.

Thats not to say the DS4 isn’t handsome, it is, but it’s apparent best efforts to queue visually from Maserati and Mercedes are controversial to some.

To my eyes it’s much more attractive than BMW 1 Series and more interesting than Mercedes A Class. It’s utterly typically French in it’s selective yet apparent smattering of bling, but stylish nonetheless.

It’s a similar kind of western European post modern premium that Peugeot and Renault have been trying for themselves with mixed success. A smattering of abstract shapes, raked roof lines, intricate and pretty light graphics and a nipping and tucking of the gopping mouths of the mid to late naughties.

Crucially, it looks every bit of the £20,000 plus you will be outlaying for the honour of ownership. A strong tick for the first core value DS claims to adhere to— Avantgarde design. 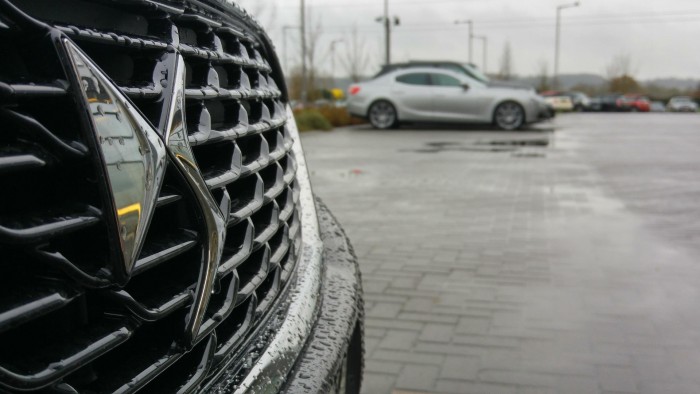 The interior caused conjecture. What impressed me were the “watch strap” seats whose design harks back to that of the iconic Citroen SM, and whose leather is purported by DS to be some of the finest in the automotive industry.

Comfortable, deliciously soft and equipped with lumber massage, they almost clouded my judgement. 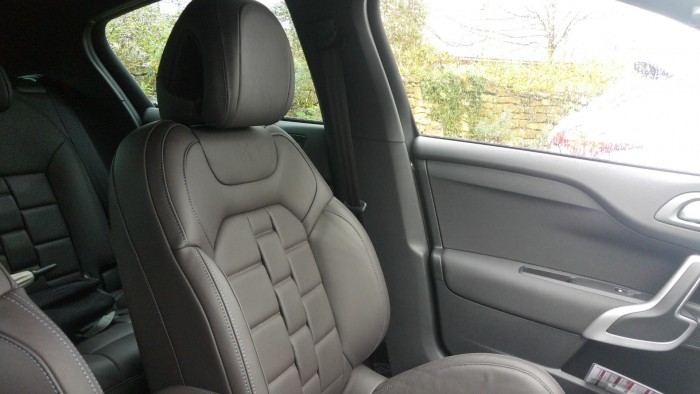 Viewed without the lovely seats, the DS4s cabin is similar to French contemporaries in it’s move from recycled coke bottle plastic to some harder wearing more durable stuff, but as many colleagues stressed, it’s barely hanging onto the coat tails of the Germans in terms of quality.

I personally found the vast majority of control surfaces specifically to have a good feel. Buttons gave a weighty click upon compression and the steering wheel was lovely and soft to the touch. It’s all in the same vein as much of what the French are doing at the moment: a cut price but nevertheless commendable pseudo Germanic hike in quality.

In terms of room in the cabin, the DS4 takes a major blow. With the front chairs set back for taller folk, the rear leg room is not far off that of a coupe. It claims back lost ground with a capacious boot, but not much. 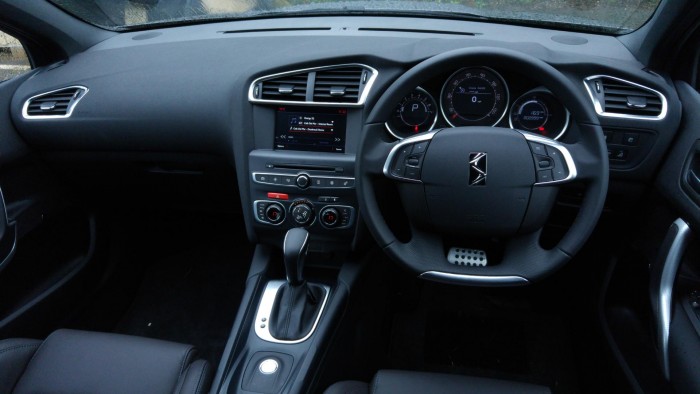 The DS4s adherence to the fourth DS “Core Value”, “Dynamic Hypercomfort”, is at its best in the seats, and its worst with the smattering of scratchy plastics and it’s slim pickings approach to rear legroom.

Overall the package isn’t as resolutely German and air tight in terms of quality and common sense as most would like for the money.

In car entertainment was a big of an enigma at first, but functioned perfectly adequate once learnt. The touch screen is responsive and clear whilst the bluetooth and maps systems were virtually faultless.

Once again, it would struggle to impress next to some of the newer German systems. The sound system too was lovely, as to be expected for something that wants a piece of the BMW 1 Series pie. A solid effort, but the second DS core value “Experiential Technology” is a bit of an over sell. 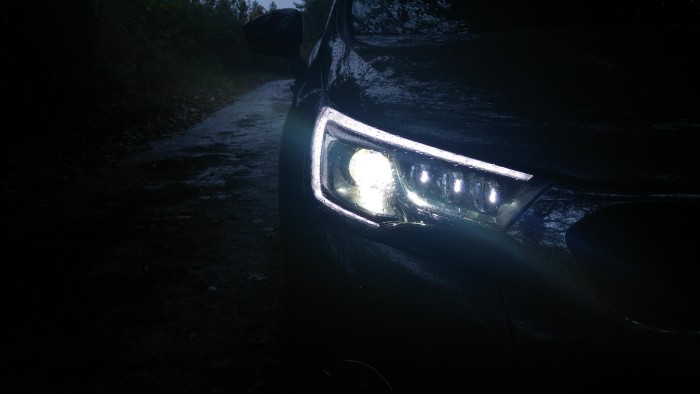 Driving dynamics were what I found to be its most Germanic feature. The 180ps BlueHDi engine was as strong as any mid range diesel i’ve experienced in an A3 or A4, and served to provide the kind of brutal surge expected of something of an executive ilk.

The EAT6 automatic gearbox loved the wealth of torque on offer too, and was a much more accomplished application than i’d expected. In terms of shift speed it wasn’t about to pull a DSGs pants down, but remembering that it isn’t a performance installation, it was sufficient for quickly gathering pace when toe was applied. 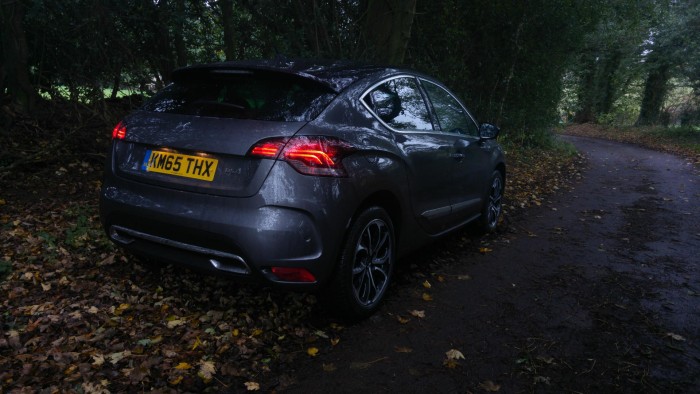 Real diesel clatter was only evident at lower speeds. Anything over 40 mph and you’re commendably isolated from tyre roar, engine drone and buffeting. Though induce a downshift or two and you will hear about it.

To steer it was fairly stuck down, with a bias in the upper reaches of pace toward understeer, but there was no evident undue imbalance. Once again, a distinctly VAG like inert stability coupled with strong pace.

It is worth mentioning at this point that the spec of our 180 BlueHDi test car meant for a £27,000 OTR price, with just under a thousand of that going on the optional seats. 20k starting makes it much more accessible lower down the range, but this top spec item is much more befitting of what I take to be the DS prerogative- to be a cut above the “average” offerings. 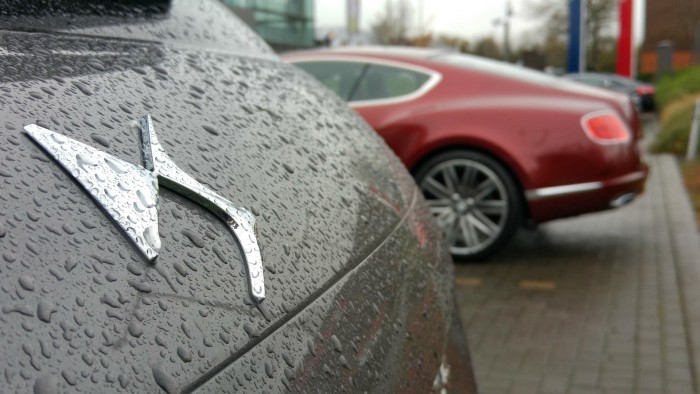 This seems a lot for what is underneath, whisper it, a Citroen C4, and especially given we’ve established that in no area does it excel ahead of the German hordes. But I still contest that a similarly specced 1 Series, A3 or A Class would be well into the thirty thousands with little unique to show.

If someone were properly in the market for a “Luxury” hatch, I really think those seats could sell it for them. It’s probably quite telling that this cars defining feature is a seating option. Read into that what you will.

Is the market for the DS4 too niche? They’re certainly treading cracks in the ice.

The pre facelift seemed to sell reasonably well with 115,000 units shifted globally since its release in 2012. Time will tell. 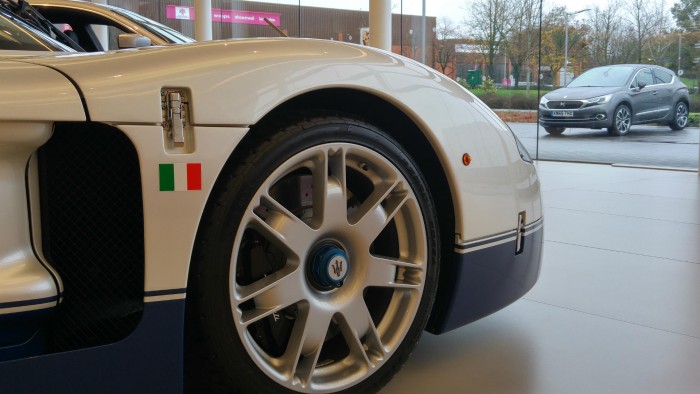