Volvo’s XC60 has been around for a while now, 7 years in fact. It has had a facelift along the way, but with all new XC90 just hitting the streets how well does the current XC60 stack up amongst new competition. 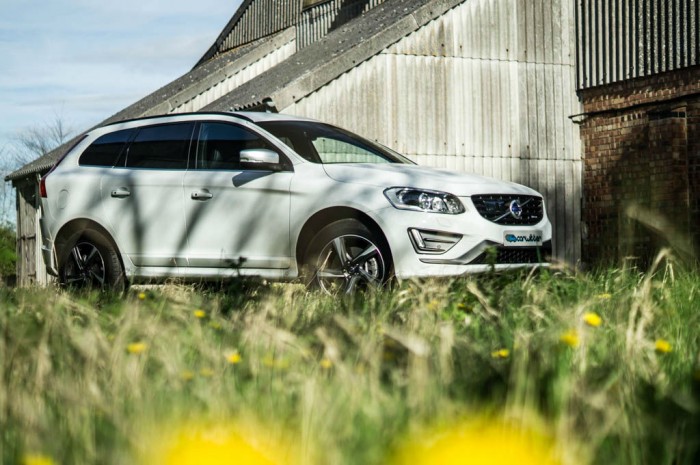 Finished in White with the dark tinted windows and the R Design body kit it’s a good looker, short overhangs mean its 4.6 metre length is hidden well. The XC60 is actually 30cm longer than a Qashqai! 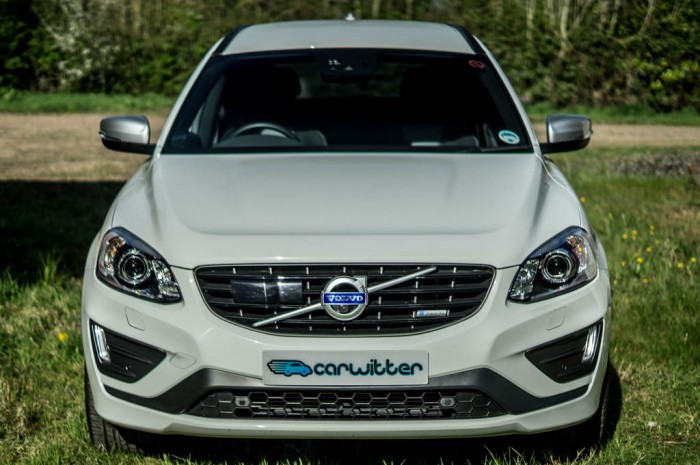 At the rear, smart LED lights keep the back end looking fresh and modern, twin tailpipes give it a sporty look set against the silver R Design trim.

Up front the LED lighting continues with some high mounted running lights in place of front fogs, the headlights though are very trick… 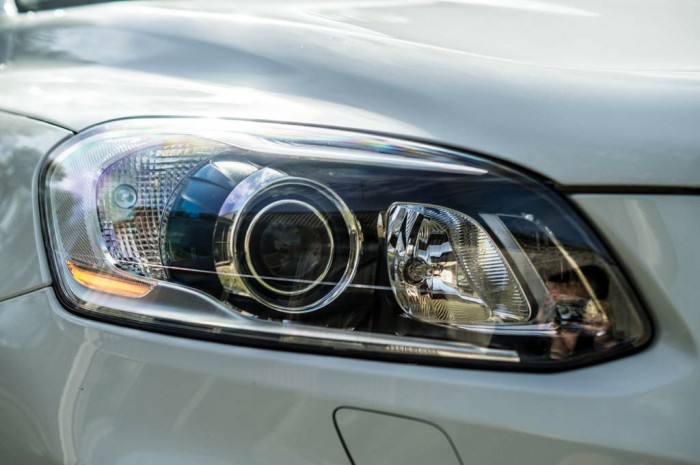 Volvo call them Active Bending Xenon Headlights – mouthful. In simple terms they light up everything except cars coming toward you.

Drive down the road and you notice the field either side of you lit up, you can see everything even miles in front of you is lit up in crisp white light.

As soon as a car comes toward you it becomes shrouded in darkness. This shadow tracks the vehicle until it gets right next to you, and it then switches off the part of the headlight that was flooding the field.

It’s like magic, and until you get used to it its rather distracting as you watch this shadow dance around in front of you. 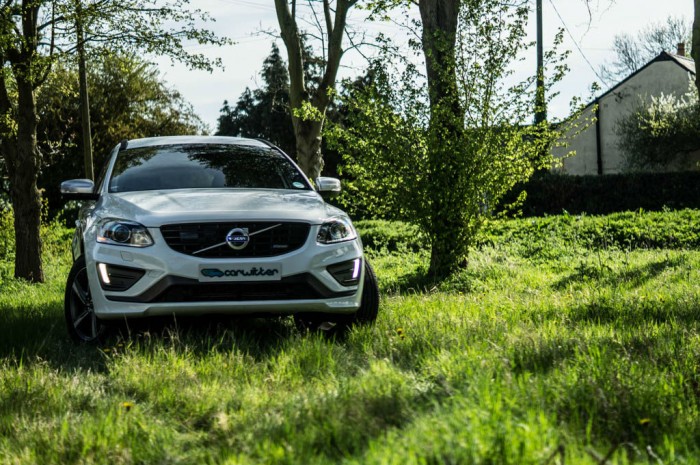 Jumping up into the Volvo and starting it for the first time you notice the rather loud, unrefined engine…it’s more like a tractor than a premium crossover.

Once up to speed it quietens down no end which is a relief, and only at the very higher end of the rev range will it noticeably intrude into the cabin.

The D4 engine pulls well, with a 0-60 time of 7.8 seconds it’s fairly nippy; especially for its size and heft.

Gear changes are silky smooth thanks to the optional Geartronic 8 speed ‘box, and when put into manual you can pick up the pace nicely. 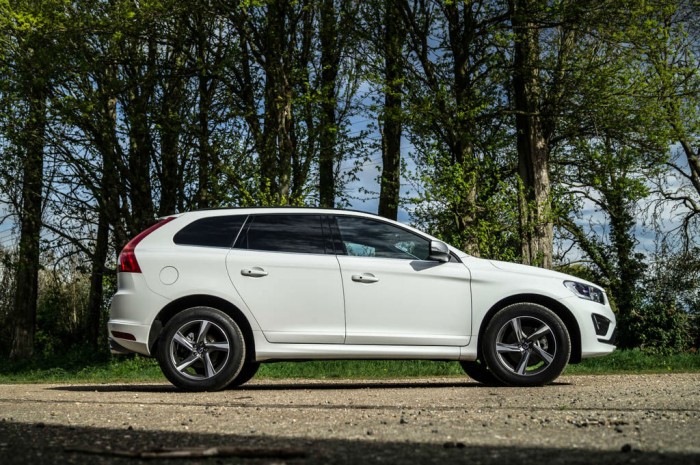 Ride is very good, a little on the firm side in R Design spec but it glides well over the majority of surfaces, but with this being front wheel drive and the surging of power you can find the front wheels scrabbling a bit on occasion as you turn and accelerate out of a junction.

Body roll is kept to a minimum in corners thanks to the stiffer setup on the R Design, you can press on at a pace and still be in total control.

Over 310 miles we managed 38 MPG, this was mainly over long A road jaunts, which is a fair old way off of the claimed Urban rating of 51.4 though.

Around town you can probably expect to see it dip a little lower than 38 in reality. 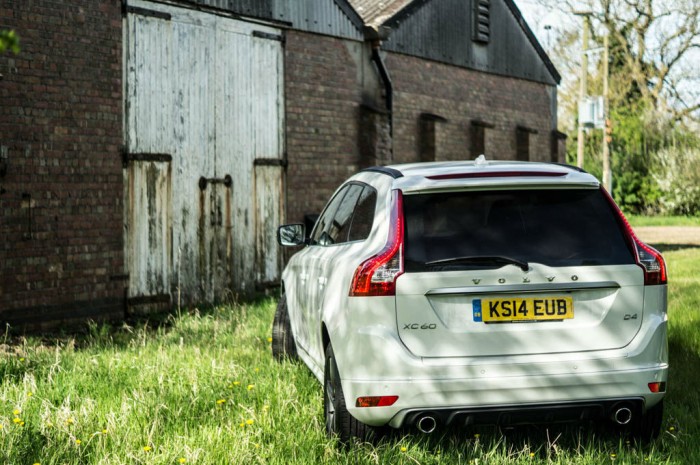 Inside, everything is high quality as you would expect from Volvo. Tactile buttons and nicely made plastics are easy on the eye. 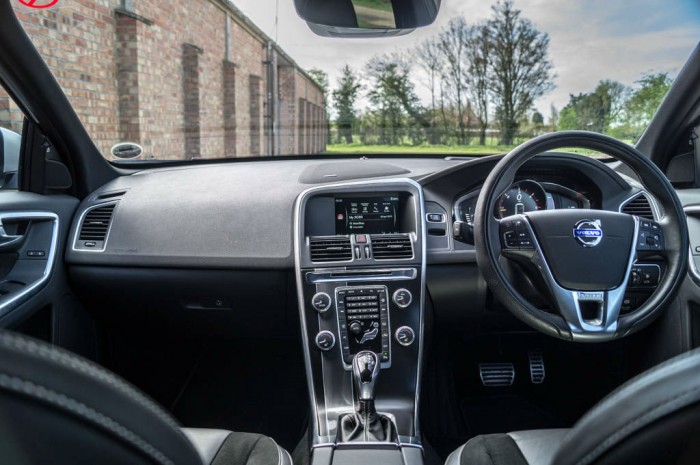 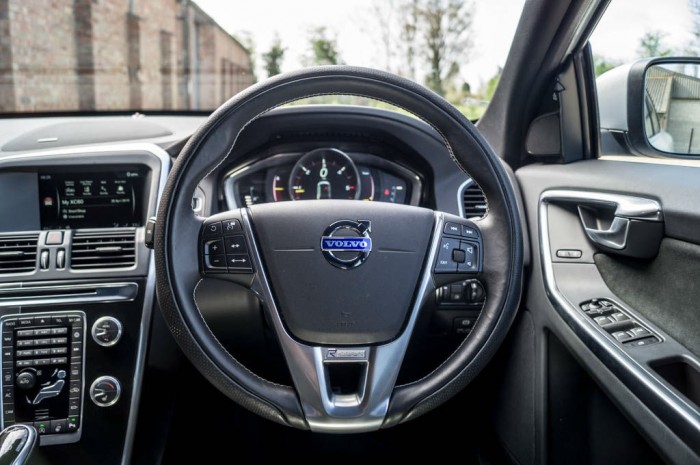 Rear seat legroom is good but not great, whilst headroom for adults is adequate, thanks to the high roofline of the XC60 and low hip point of the rear seats.

Boot space is a rather cavernous 494 litres, this can be increased to 1455 litres once the rear bench is folded down. 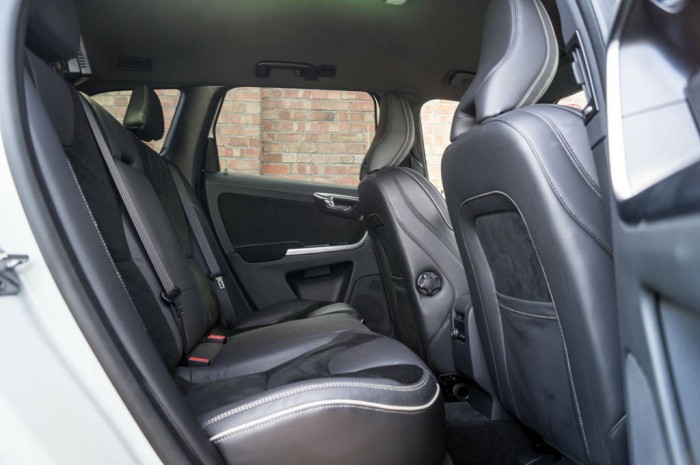 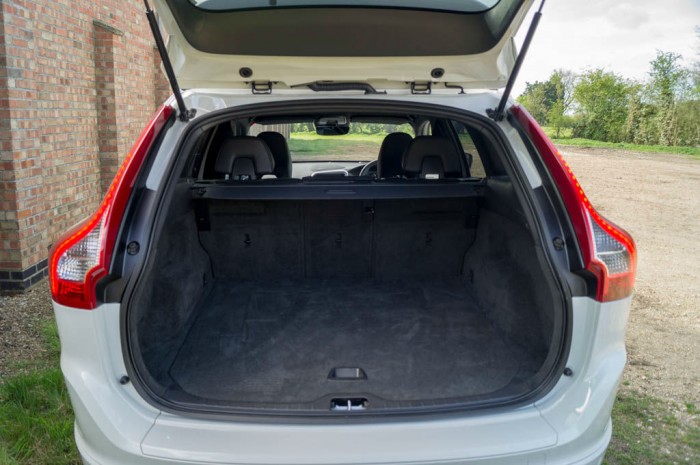 Volvo’s XC60 may be near to being put out to pasture but it is still as popular as ever. The amount you see on the road is a testament to that.

High quality interior, a spacious cabin and decent driving dynamics keeps the XC60 at the top of the pile when it comes to premium crossovers.

The majority of buyers will opt for the FWD option, and this can only currently be specced with the D4 190 HP engine. If you want a little more poke you can opt for the 220 HP D5 Geartronic, but that will cost you nearly three grand more. 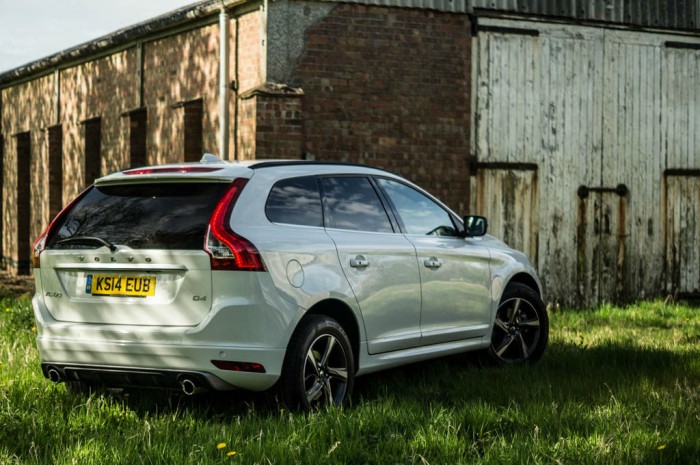 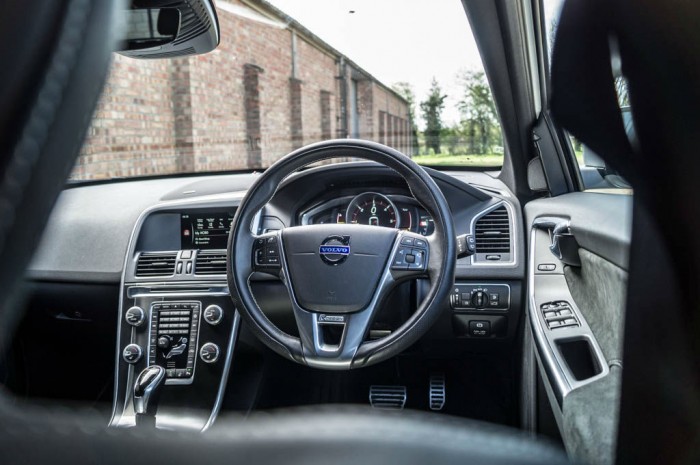 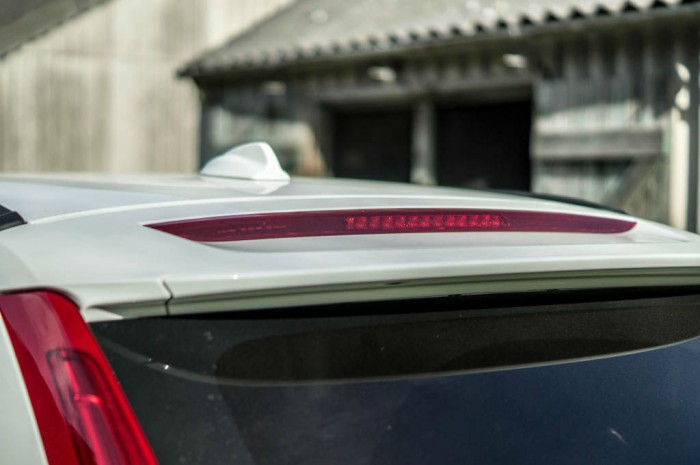 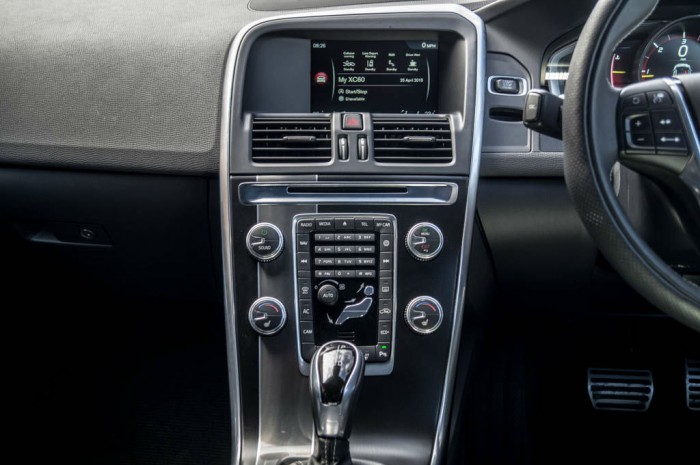 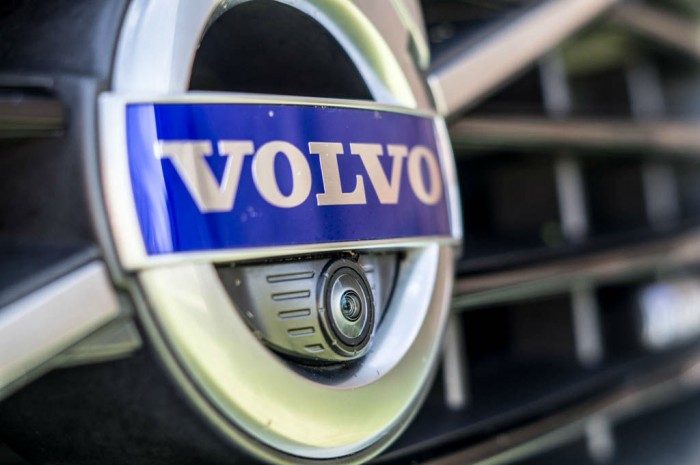 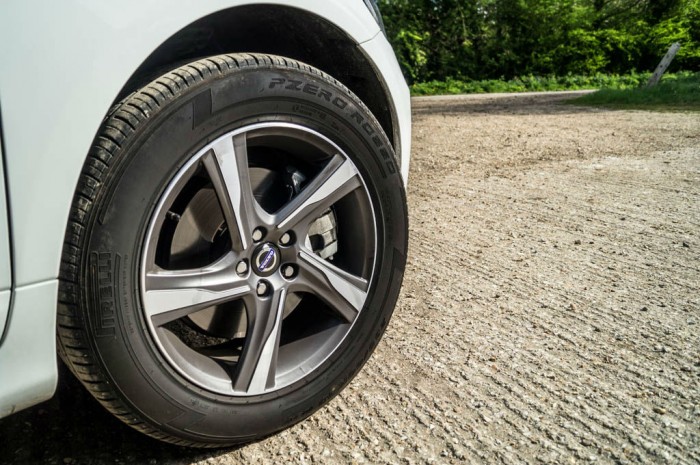 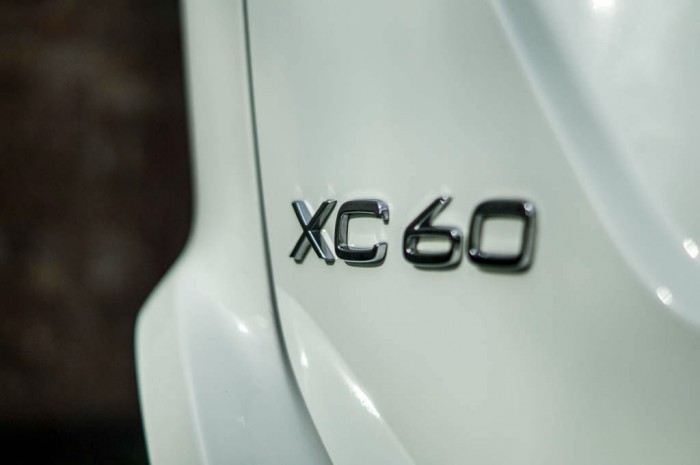