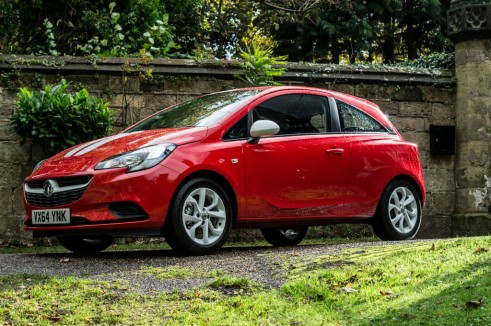 Vauxhall’s long standing Corsa has undergone yet another reincarnation. The seemingly unstoppable hatchback has sold nearly 90,000 units a year (on average) since it was launched 21 years ago.

That’s pretty impressive, and shows why they can be found on nearly every street in the UK.

This fourth generation model has a new chassis, new engine line up and a rejuvenated cabin. Prices start from £8,995 for the 3 door 1.2 petrol and go all the way up to £10,825 for the new 1.0 litre ecoFLEX in basic Sting trim level.

I’m not going to beat around the bush, I have never been a fan of Corsa’s. Growing up they were the default ‘go to’ car for new drivers at 17.

For me they have always lacked a certain flair and have seemed a little lacklustre to drive…it looks as though this latest generation has changed my opinion. 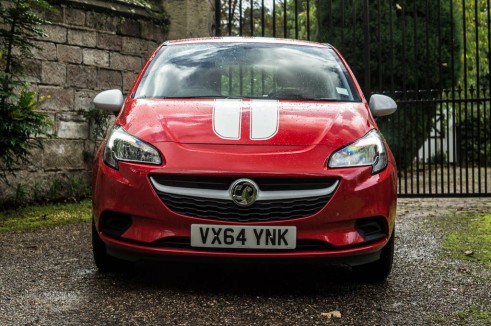 Firstly the new Corsa really just looks like a facelift, Vauxhall won’t want you saying that openly though! Up front some new very McLaren-esque lights sit atop a more sculpted front bumper, defined style lines adorn the side and at the rear the lights become larger.

To the untrained eye it certainly doesn’t look as though a lot has changed. But the actual fact is – this is a whole new car, you won’t find any of those body panels on the previous generation! This Corsa also sits 5mm lower than the outgoing model, it definitely looks sportier. 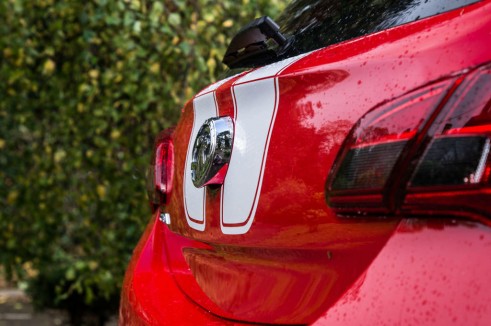 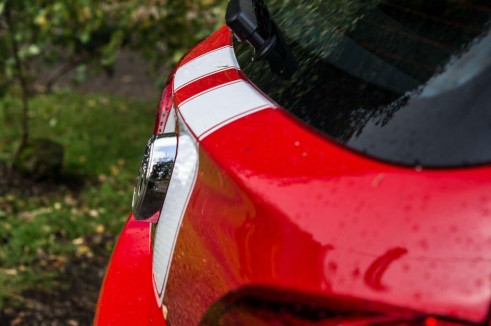 One thing I can’t stand though is the ridiculously huge, sticky out rear badge. It serves as the boot release so it hides that well…but why does it have to protrude so far?! 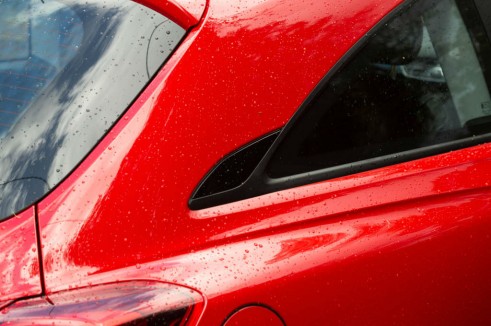 Also. I’m not entirely sure what the black ‘flick’ on the rear quarter window adds. Maybe it’s there to differentiate side on between the third and fourth gen models… 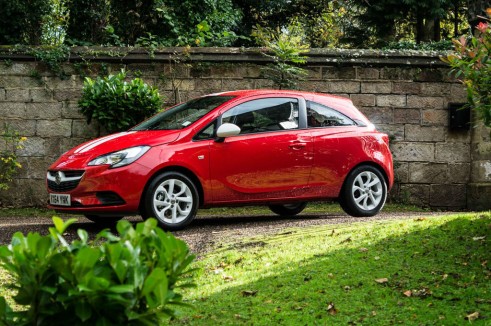 Having recently driven a 5 door Corsa from the current range I thought it was best to start off with something familiar. After a good 75 mile drive behind me the differences seemed like night and day!

For a start the ride is far more composed, you now don’t feel like you are driving a wallowy bouncy castle. Steering is very direct and almost pin sharp in response. Chucking the Corsa down some rather stunning Leicestershire B roads it was actually a joy to drive!

Ride is still soft as you would expect from a small hatch, but the damping has been sorted out no end. The whole car actually feels more rigid and together. 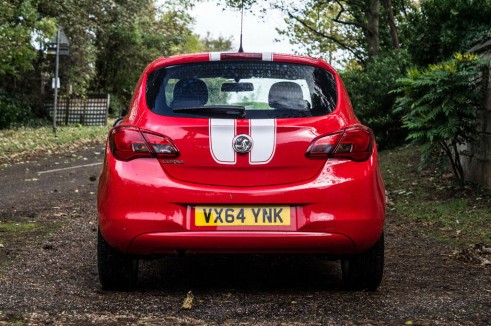 Strapping a turbo to the 1.4 litre has done it the world of good. No longer are you left with a lethargic machine that almost makes you want to get out and walk. Now pumping out 99 BHP it has a 0-62 time of 11 seconds, only around .8 of a second quicker than the old 1.4 but the torque deceives you.

We also drove the 1.0 litre turbo with 114 BHP. Over the same type of driving conditions we only managed around 37 MPG. In the 1.4 we managed 40. This was mainly over fairly brisk B road driving, but it was enough to convince us the 1.4 was the way to go. 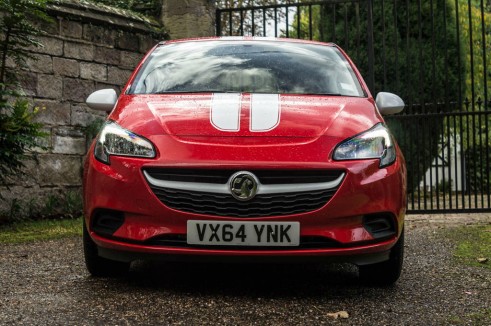 Unfortunately we also sampled the 1.2 litre bog standard engine. Just don’t do it, don’t even consider it. It has no urgency about it what so ever, it is infuriatingly slow. In fact its 0-62 time is 16 seconds! 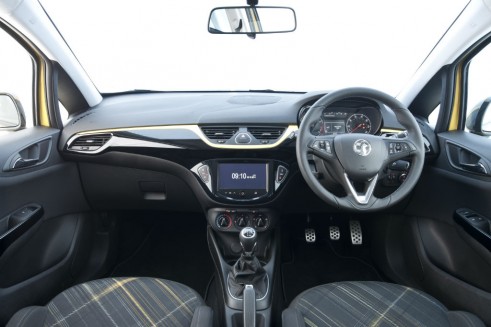 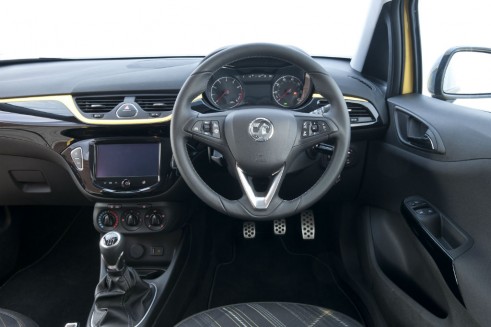 Inside the new Corsa the quality has been beefed up considerably. Firstly you notice the 7 inch touchscreen that adorns all but the most basic trim levels.

It runs IntelliLink so you can access the majority of the content on your smartphone, you can also download BringGo a SatNav app that stores the maps on your phone so you don’t need a constant data connection, handy. 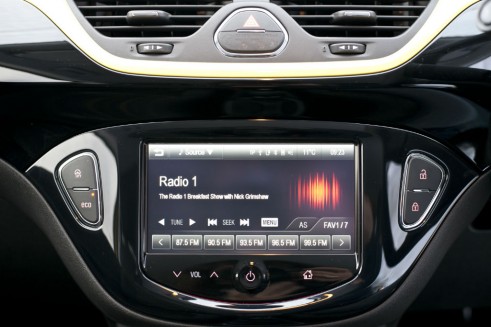 All of the plastics around the centre console feel nicer than the previous model, the switchgear seems sturdier too. Soft plastic covers the dashboard and is easy on the eye.

Toward the doors and lower down in the cabin you still get the cheap hard scratchy stuff but it’s mostly kept away from you. 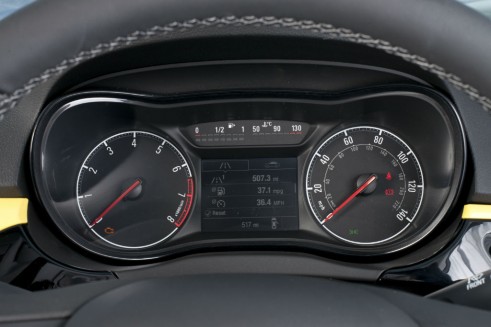 The amount of kit that can be had on the new Corsa is quite incredible. We drove a top of the range SE model which was equipped with heated cloth seats and a heated steering wheel, the latter would have only been found on top of the range Mercedes a few years ago.

One thing that should be changed is the tilt angle of the steering wheel. It only affected us in the 5 door, but it just wouldn’t angle down far enough for our liking when the seat was in its lowest position. 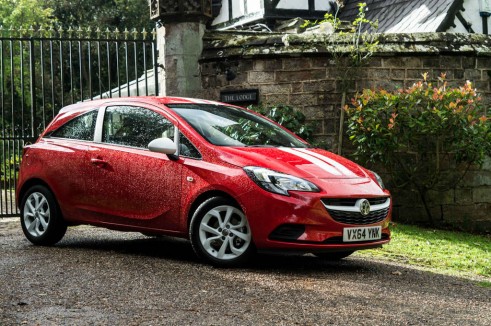 The changes on the new Corsa may only seem superficial, but Vauxhall have really done some work underneath that tweaked exterior to make the Corsa a better handling, more engaging drive. Beware though, it has to be coupled with the right engine!

We would have to recommend the 1.4 litre Turbo with 99 BHP. It pumps out 19 more grams of CO2 per KM compared to the diminutive 1.0 litre turbo, but the beefier 1.4 has a much more useable power band.

You don’t have to be revving the nuts off it to get some decent performance. Unfortunately you can’t have that engine in just any trim, you have to opt for SRi which will pump the basic price of a 3 door up to £12,595.

2015 Vauxhall Corsa – 1.4 Turbo is the engine to get, great ride, some questionable styling. 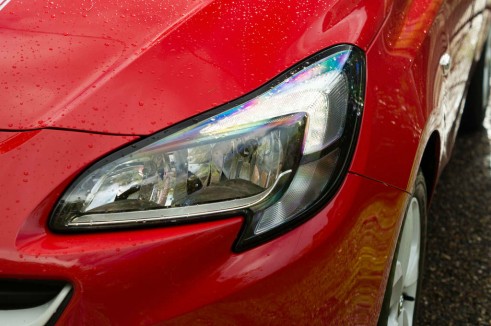 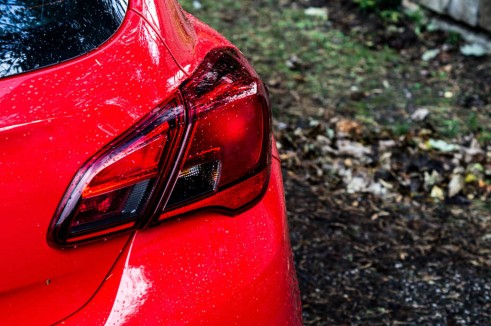 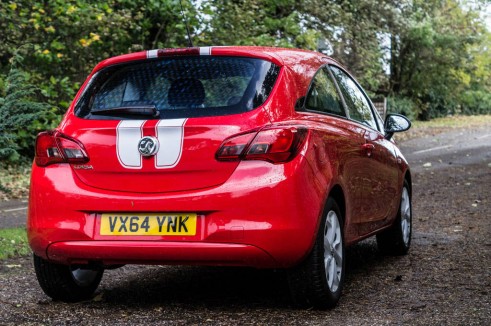