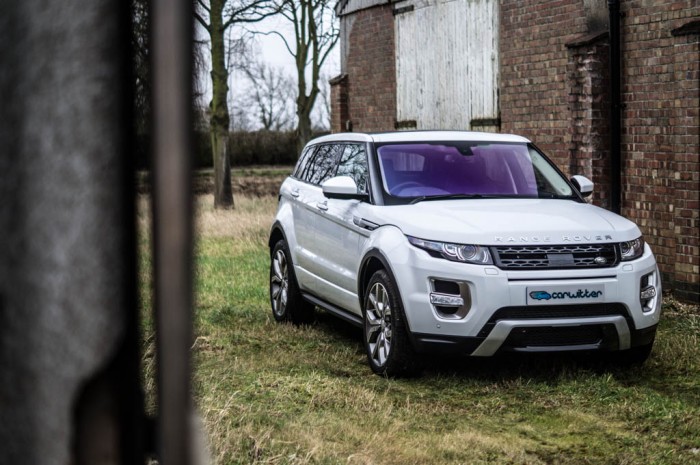 Last time we drove an Evoque we purely tested it in an urban environment, this time we thought it would be a good idea to test its off road ability.

We went for exactly the same engine as last time. The 2.2 litre SD4 with 187 BHP. But this time it is fitted with the new 9 speed ZF gearbox, and it’s a full blown 4WD as opposed to the two wheel set up we sampled before.

In top level Autobiography spec it had a further £5,500 thrown at it.

The most notable options were the rear seat entertainment package, consisting of wireless headphones and LCD screens in the rear headrests, a head up display and adaptive cruise control. 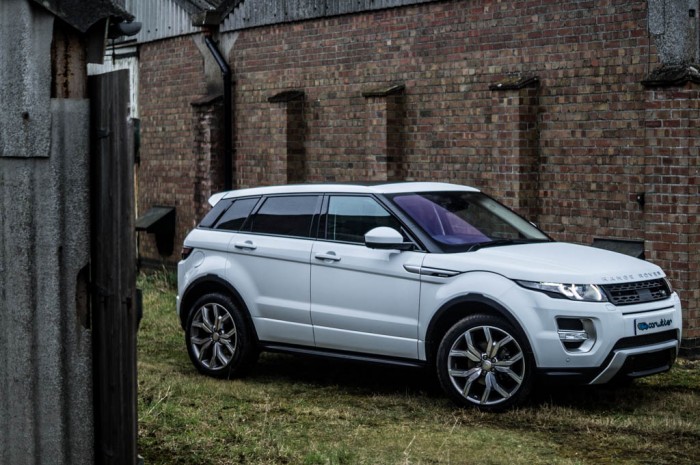 There was another slight difference…this  Evoque was the 5 door model.

Still a strong looker, it doesn’t quite have the same sleek appearance of the 3 door, but it’s one of the most modern looking vehicles on the road that’s for sure.

With a minor facelift around the corner I think the current model is the better looker – more true to the concept. 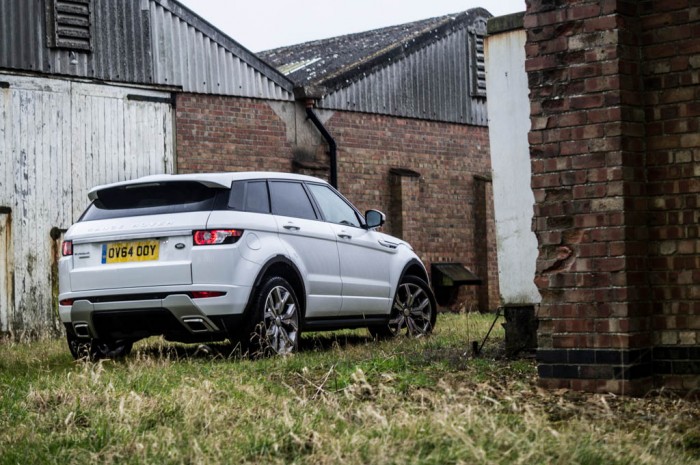 Being four wheel drive you would expect the fuel economy to nose dive, however over nearly 400 miles we managed 36 MPG. Not bad, but a little way off the quoted Urban rating of 39 MPG.

The sluggishness of accelerating off the line that hampered the old gearbox is gone. This new 9 speed box is lightning quick and a real dream when left in auto.

Being a 4WD the Evoque has many different modes, Grass/Gravel/Snow; Mud Ruts; and Sand.

Now I can’t see you ever needing any of those in your normal driving routine, especially not in this model of Range Rover. 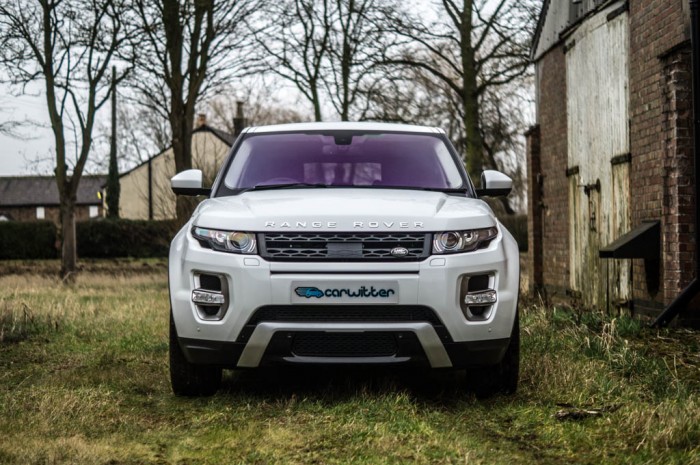 When selecting Dynamic mode the MagneRide dampers set the car up to have “tighter body control, with flatter handling and sharper responses” and this does work rather well.

That is, until you hit a section of slightly undulating road. Then you are sent bouncing up and down in your seat, like on a bucking bronco. It’s not the cars fault entirely…..as it works great on perfectly flat, smooth sections of dual carriageway, but anywhere else and it just makes the ride rather bumpy.

For the most part we left the Terrain Response system in neutral, “General Driving” mode; the ride was then brilliantly smooth. 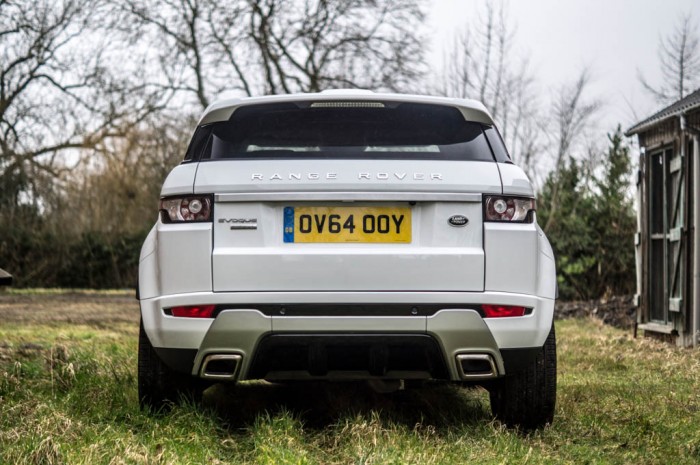 With a ton of on road driving under our belt, we spotted a track leading into the countryside and thought…why not?

Starting off with soft, shallow mud we kept the Evoque in its normal setting. Progress was good and before we knew it we were 2 miles into the depths of middle Lincolnshire.

Coming to a rather large grassy hill we stuck it in hill descent, lifted off the pedals and let it do its thing. Gradually we reached the bottom in a slow, controlled manner. 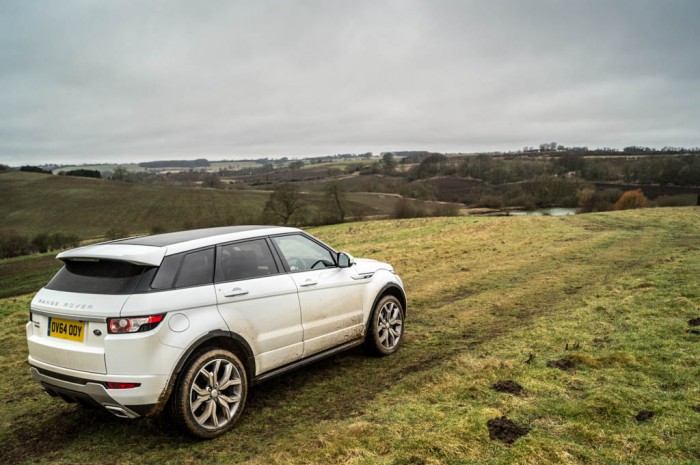 At the bottom there were two rather large lakes with a small passageway of muddy grass in between, bottling out and not wanting to turn the Evoque into a rowing boat we thought it was best to head back uphill.

Attacking it Clarksonesque (head on) didn’t quite work…being wet with very soft mud we would start to climb, then the road tyres would fill with mud and slip would occur.

Trying in different modes made no difference…after 10 minutes of farting about like this we stuck it in Grass/Gravel/Snow and went for the angled attack. Slow but sure the Evoque climbed its way up the hill, tacking across it – like the sailboat it nearly became earlier on – we made it to the top. Panic over. 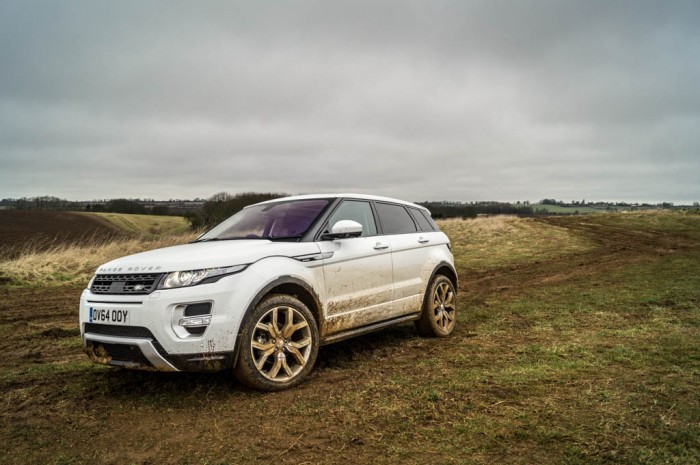 Heading back to the main road we took the rather more rutted route. It looked as though only a tractor had troubled this passage before now.

Sticking the baby Range in Mud Rut mode we cautiously entered. Taking it slow you could hear the front diff whirring beneath you, the wheels twisting and turning with the ruts and nearly all control is sapped from the cabin, you can’t really steer, nor can you gun it.

As the really deep ruts entered water and the nose of the Evoque began sinking downwards the worry returned. But keeping a light foot on the accelerator we were pulled back up and out with ease.

Making it back to the road our pearly white ‘Made It Chelsea’ Evoque showed it meant business. 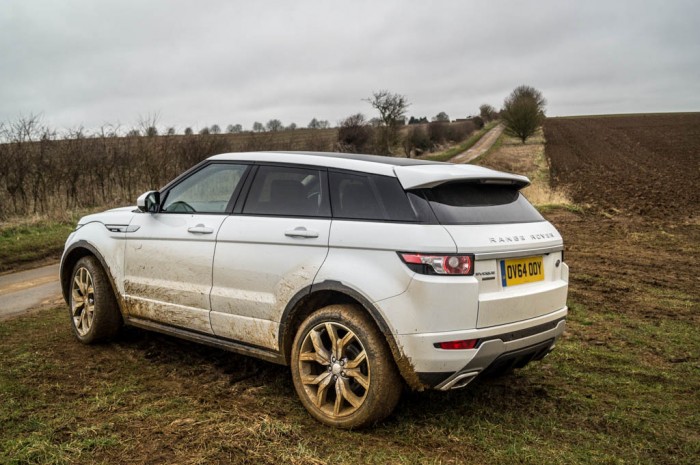 Flicking it back into Normal mode we bumped back onto the tarmac and left in flurry of flying mud…now to get it cleaned! 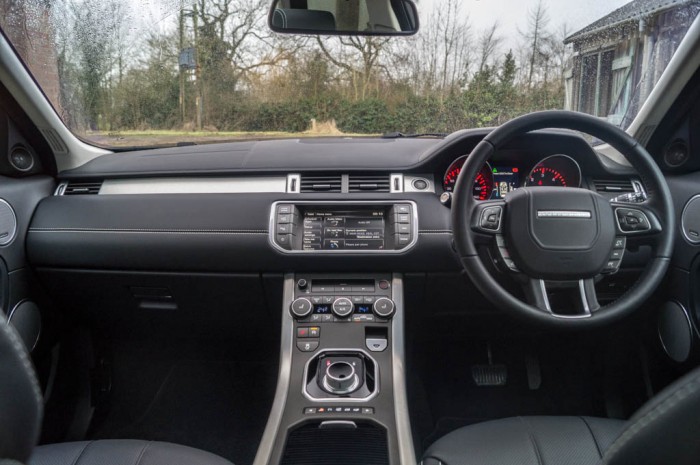 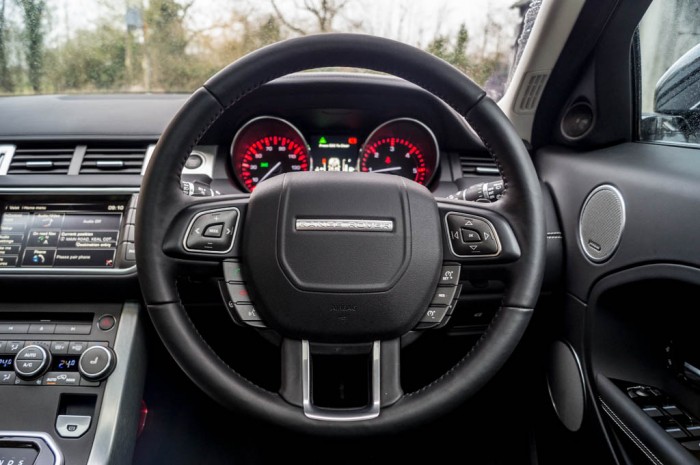 Whilst we were playing off road you couldn’t help but notice the luxury you are swathed in on the inside. 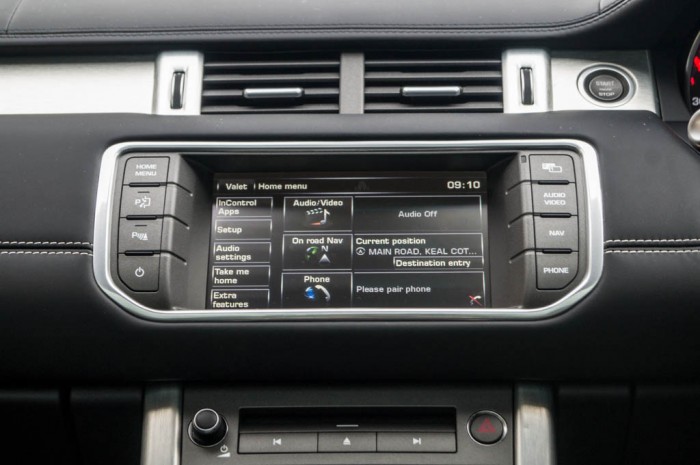 To keep you entertained there is the dual view infotainment display. One side shows the driver the Sat Nav and car controls, but from where the passenger is seated they can watch TV or a DVD with sound being played through wireless headphones. 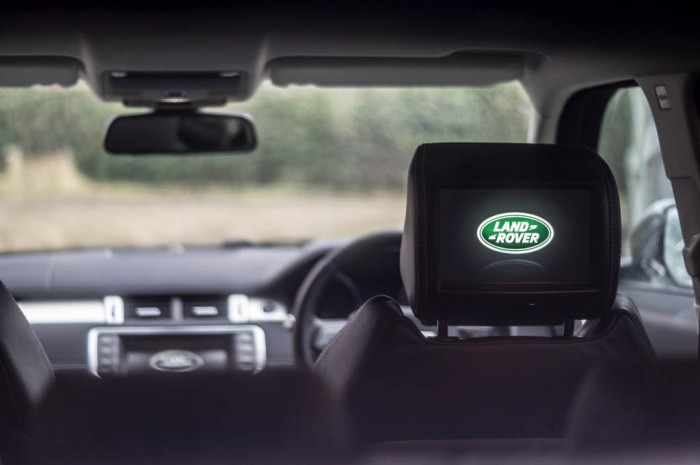 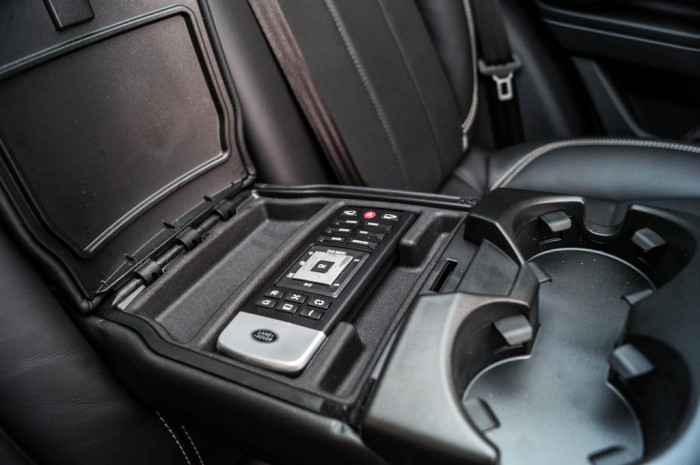 The front seats also have LCD screens built into the headrest with a remote control being found in the rear central armrest along with more wireless headphones in the door pockets – to quote Mr West ‘I got more TV’s in here than where I live’.

You certainly aren’t left wanting on long journeys that’s for sure! 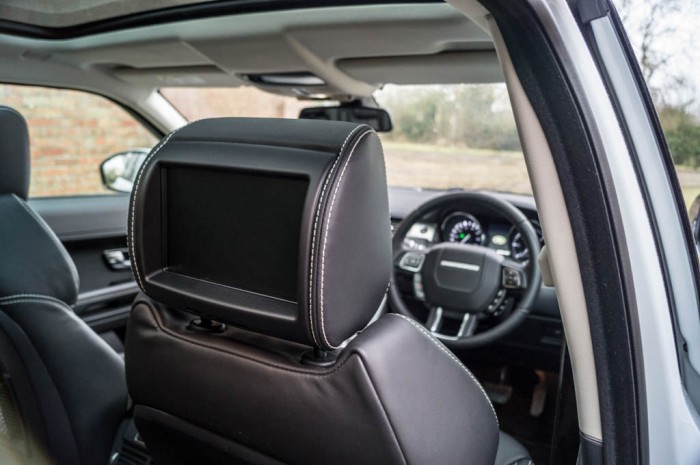 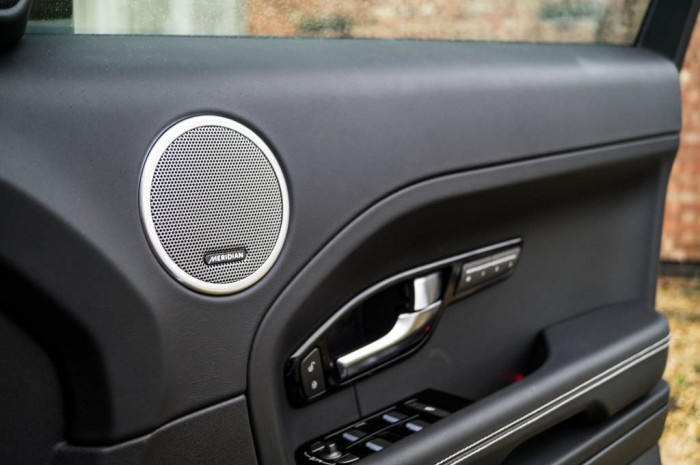 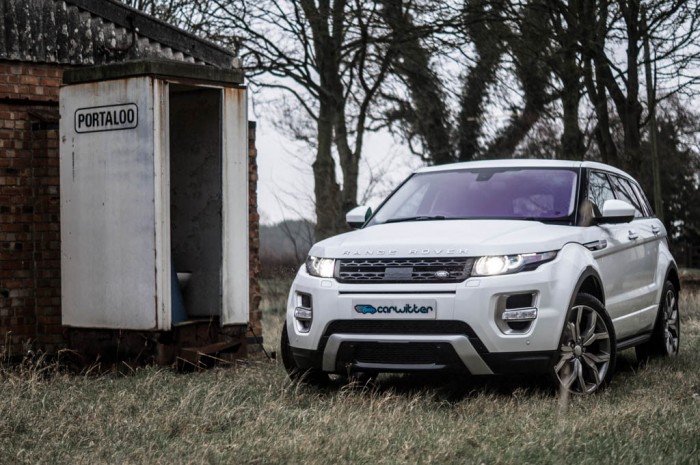 Having previously driven the Evoque exclusively on road we were suitably impressed, but having taken it off road too it shows what a versatile vehicle it is.

No, it’s not as impressive as a Discovery with all its locking diff trickery, but driven intelligently off road it will not let you down, even when shod with standard road tyres.

Freelander underpinnings it may have, but it also has killer looks, great on road ride, and plenty of off road abilities. 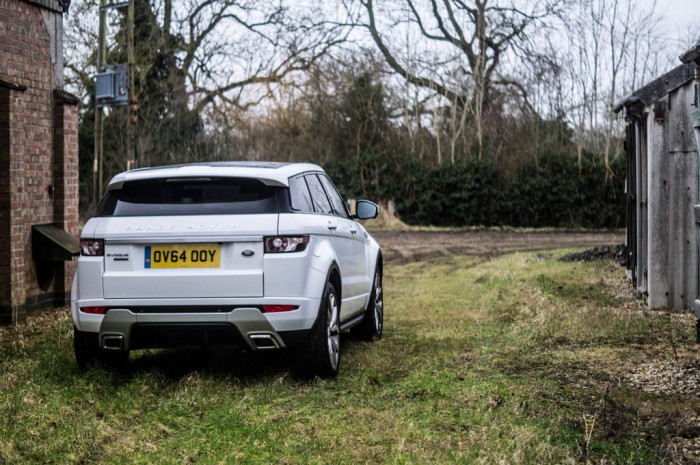 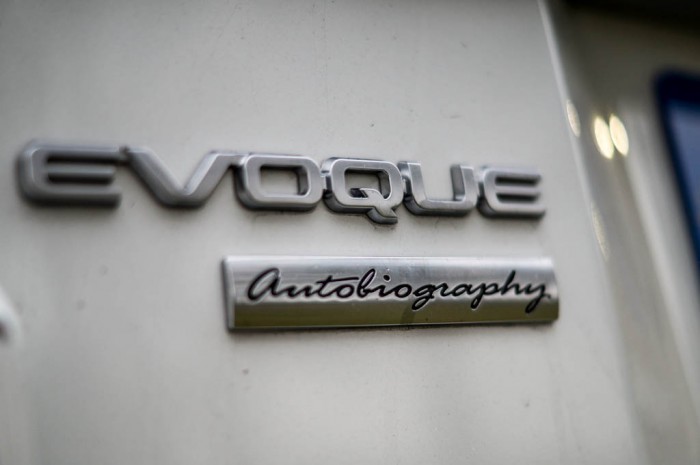 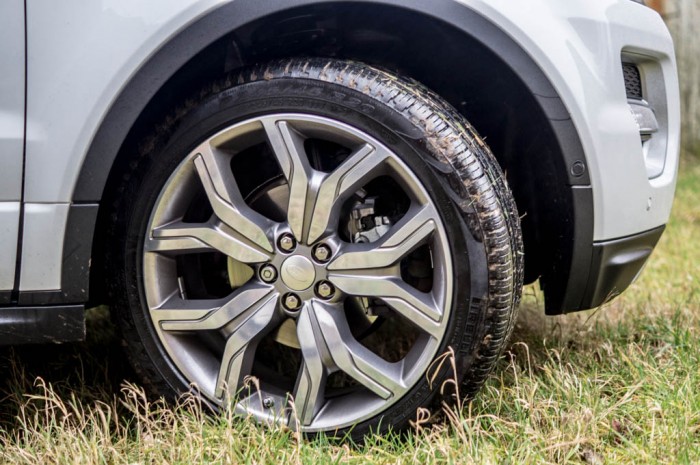 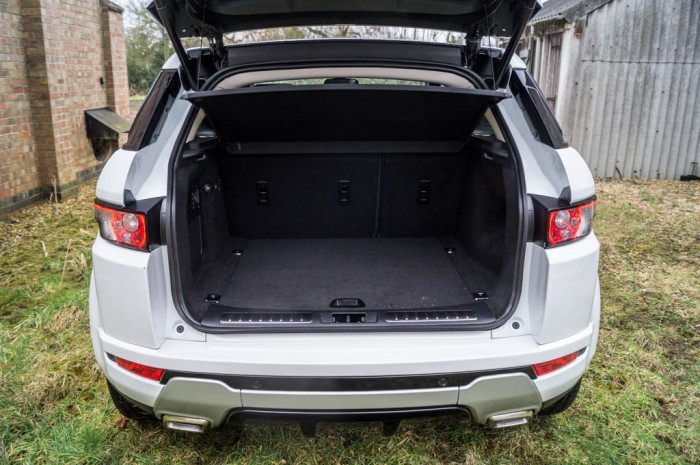 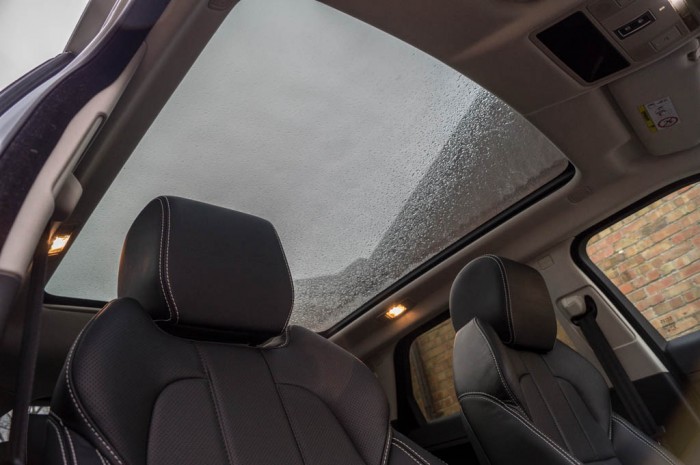 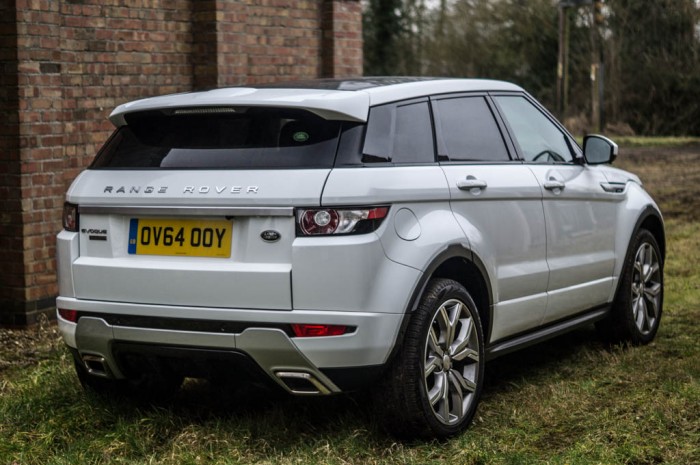 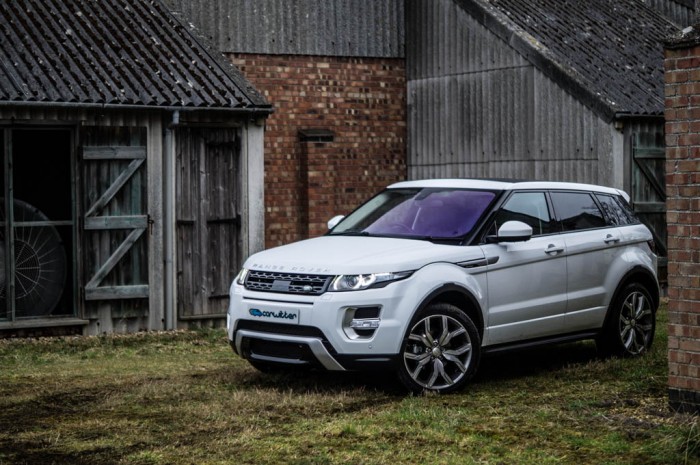 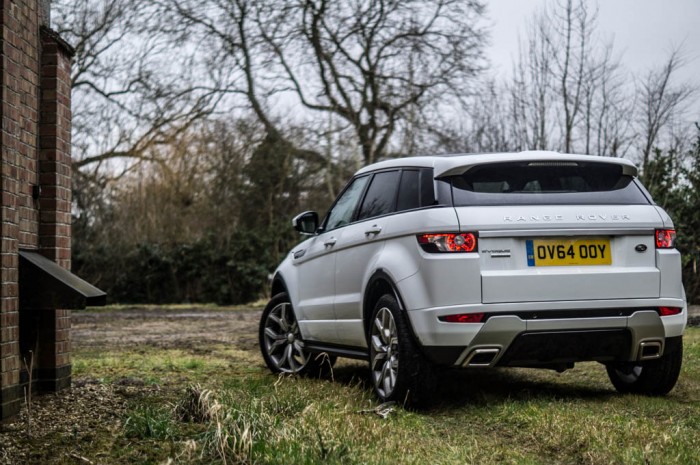 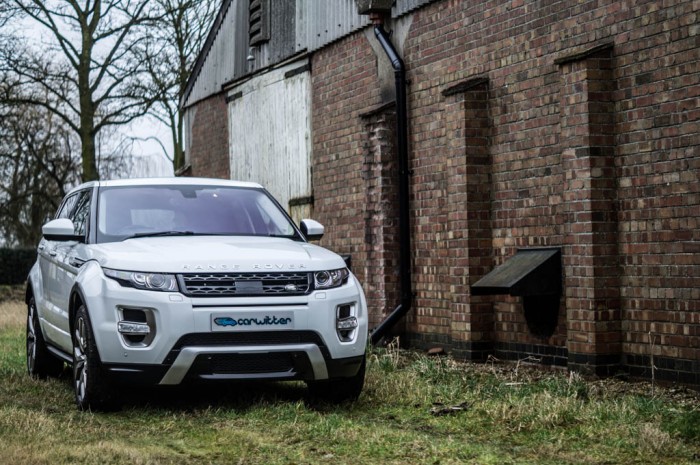 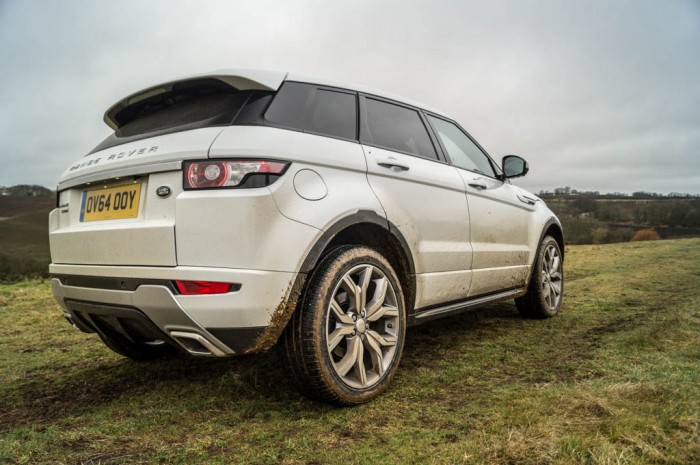