Back in June 2013 we reviewed the Mazda 6 for the first time. We were duly impressed, its diesel engines were spritely, handling pretty much on point and it was a good looker. There were one or two grumbles though, thankfully these have been fixed with this 2015 facelift.

Our test car was the saloon fitted with the 2.2 litre 173 BHP diesel engine, in range topping Sport Nav spec. Option less this would set you back £26,795.

The Mazda 6 was never an ugly car, its flowing ‘ KODO – Soul of Motion’ design makes for a sweeping, rather elegant shape. It’s far better than the boxy Germanic hordes that are the go to choice in this market segment.

For 2015 Mazda have shod the 6 with a fresh face. A new bumper and more intricate grille are the long and short of the changes, along with some smarter LED rear lights.

Up front the angular grille gets horizontal chrome bars, whilst its sides are shouldered by a thicker chrome frame that flows from the headlights. Those headlights are also LED on this top spec model, along with the front fogs.

A few styling lines are changed on the front bumper but it really is quite tricky to tell the old and new apart, but if it isn’t broke don’t fix it!

Those new rear lights create a more ‘identifiable light signature’, which is all the rage these days.

Acceleration is quick and smooth, the gearbox has a short sporty throw to it whilst the suspension is firm but not overly. It will still soak up potholes and bumps with a dull thud. At speed it copes very well, occasionally getting a little floaty, but still giving excellent confidence.

You completely forget you are driving a 4.8 metre saloon. On twisty country roads you can plant the throttle and weave through the corners as if you were in a sporty hatchback. Steering is direct, and lightly weighted. You don’t get much feel for the road through it, but that’s a given with electric steering these days.

Accelerating in any gear the pickup is good, you can lazily leave it in 6th and overtake on the motorway with ease.

For this 2015 model Mazda have added more soundproofing behind the engine and pretty much all over the car. Last time we drove the 6 we did notice the engine noise under acceleration a lot more, road noise at speed was also noticeably quieter. 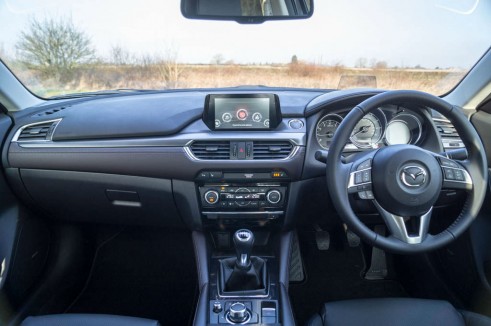 Inside is where the biggest changes have occurred though. The whole dash and center console have been redesigned.

With the omission of the handbrake – in favour of an electric one – the central armrest area is tidied up drastically….thankfully the handbrake isn’t awkwardly right under your arm as it was in the old model. Instead you now just get a small switch, much easier on the eye.

The whole dashboard now flows downward into the cabin as opposed to being rather tall and overbearing, and this is in part due to the new 7 inch infotainment screen. The size of this was our main bugbear with the old 6, it was just too small and fiddly to use safely.

Luckily this new system has completely silenced us. You control the menus by a centrally mounted ‘Multimedia Commander’ that is found just behind the gear stick.

As with the Mazda 3 the system works great, easy to navigate menus and a clear layout make it easy to switch between sat nav or audio controls whilst on the move.

Mazda have also moved the start button position so there is no more fumbling behind the indicator stalk.

Our test car had dark brown leather accents throughout the interior, they are a smart addition and help break up the swathes of black. A nice touch is the cushioned knee area on each side of the centre console.

All in all what was a very high quality interior has been properly refreshed to keep it up to date with the competition.

For 2015 standard kit throughout the range gets an uplift. Every model gets the electronic parking brake, coming/leaving home headlight function, Multimedia Commander dial with the 7 inch touch screen and manual front seat height adjustment.

Only the Sport Nav models get such fancies as the new Grille, LED lights all round and new bright 19 inch alloys.

You can also opt for a ‘Safety Pack’ which consists of Adaptive LED headlights, Lane Keep Assist, Blind Spot Monitoring with Rear Cross Traffic Alert and Rear Smart City Brake. All of that sits at an £800 premium, you can also opt for Radar guided cruise control…another £800.

Mazda haven’t really changed a lot externally on the 6, but it was a great looker to start with so we can’t complain there.

Inside is where it counts though, sitting in the old and the new back to back it’s like a whole new car, they really have done an excellent job of refreshing the 6 mid-life.

Facelift Citroen DS5 on the way