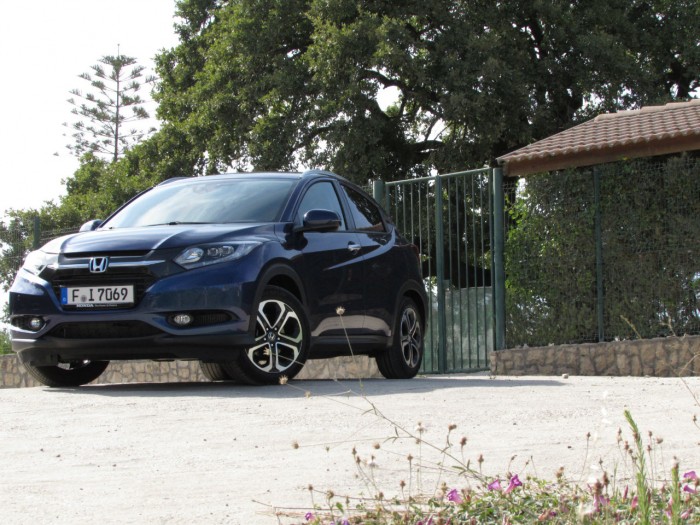 The market has been without the Honda HR-V for around ten years now, with the original model making it’s debut in 1999.

It was a Land Rover Freelander esq SUV body style with a more casual road oriented demeanour that is evident in the swarm of crossovers that have permeated the market since. Honda could therefore be justified in its claim that the original HR-V was ahead of its time just over fifteen years ago.

Today the segment that Honda arguably founded (and subsequently abandoned) is amongst the most lucrative and therefore hotly competitive in the industry.

The new HR-V then has to be pretty special to impress in such a crowded marketplace with rivals like Mazda CX5, Vauxhall Mokka, Renault Captur and Kadjar and Nissans relentlessly successful Juke and Qashqai models: the latter Nissan being Hondas primary target.

Firstly, though, we will assess HR-V independently of its rivals. Honda after all has one of the most loyal customer bases in the industry. The badge alone will write cheques.

Honda’s “Grand Concept” fuses the attractive qualities of a coupe, with the rugged reassuring silhouette of an SUV whilst incorporating the practicality of an MPV on the inside. It polarised opinion with some claiming it looked too bland and others criticising a strange amalgamation of sports and utility. 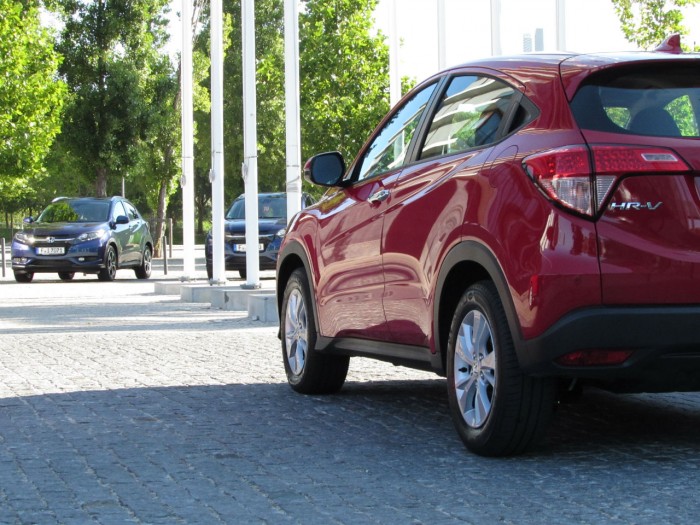 From the off the sporty influences sat well with me. Confident sporting pretensions are dominating automotive styling at the moment. HR-V is no exception, with sharp lighting, subtle yet purposeful contours, vents, a sloping roof and sharp lines that lend it, to my eye, the pucker chops required to square up to Qashqai.

Larger wheels come on high spec models but seem at odds with the rugged shape of the car. The lower specced model we tried was unapologetic and confident looking on smaller wheels. Even the standard non projector lights fall short of instilling a ‘poverty’ vibe. 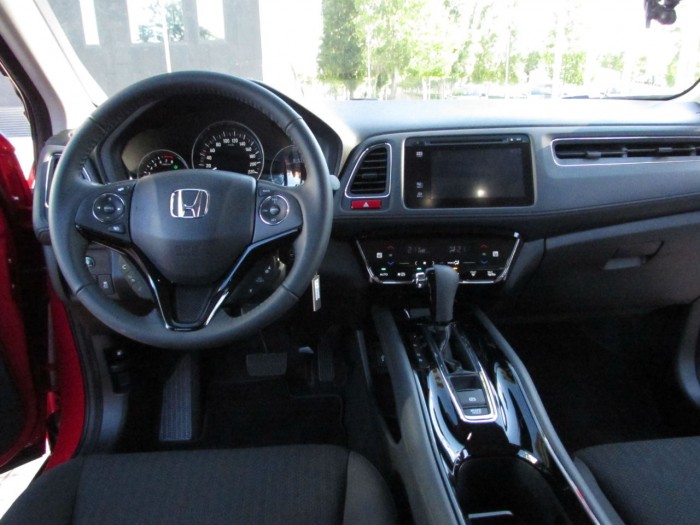 Inside, HR-V is neatly designed with a refreshing lack of buttons peppering the centre console.

Instead a 7 inch TFT touch display dominates with a touch button panel below to manage cabin climate. From there the transmission tunnel flows outward, trimmed in an attractive contouring piano black finish. The wheel and lovely luminous dials are familiar Honda.

It could all do with more colour and the shifter on the manual seemed like a bit of an afterthought, but the rest of the design is well thought out. Careful without being too conservative.

Control surfaces had a quality feel with soft leather wheel trimming and sturdy button actions. The top dash however was lumbered with a scratchy plastic complete with faux leather texturing circa 2003.

Honda claims “class leading interior space” and from our experience that accolade is well earned. HR-V uniquely positions the petrol tank under the driver and passenger seats allowing for a low floor throughout.

The back was unarguably more spacious than any other in this class. The MPV character continued with the “Magic Seats” that fold near on any which way you desire. A demonstrator model sat with an 8 foot surf board laying comfortably down the right hand side of the car with the boot packed with a couple of cases. 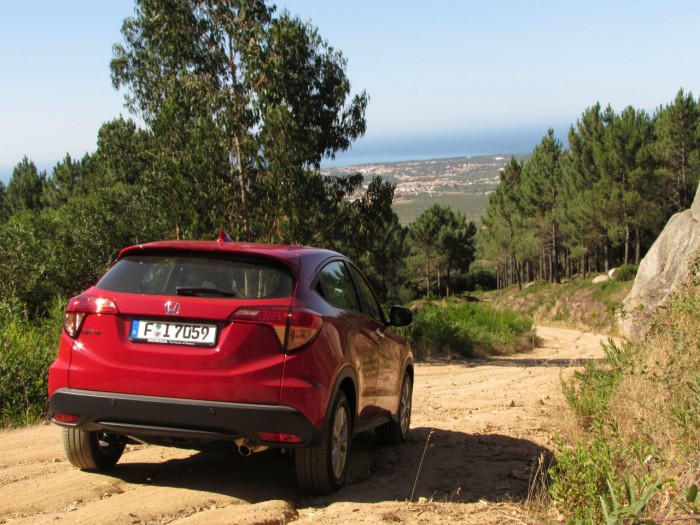 HR-V comes equipped with either 1.5 litre i-VTEC 130 horsepower petrol or 1.6 i-DTEC 120 horsepower diesel engines. Both produce comfortably low amounts of C02 whilst boasting real world efficiency figures that are closer to the NEDC claims than most- a point fervently hammered home by Honda.

In terms of competence however the diesel outshines the petrol by some margin. It’s near doubled torque endowment is significantly more enjoyable and usable than the 155nm of torque that the petrol frankly limps along with. The added grunt made for a much more relaxed and confident drive, but an omission of an automatic offering in the diesel may limit its appeal.

The petrol we tried was mated to a CVT transmission with a new EU only “multi gear feel” configuration with simulated kick down and upshift for control over engine speeds. It was an unfortunate pairing. The lack of torque meant the transmission really had to over work for a living. 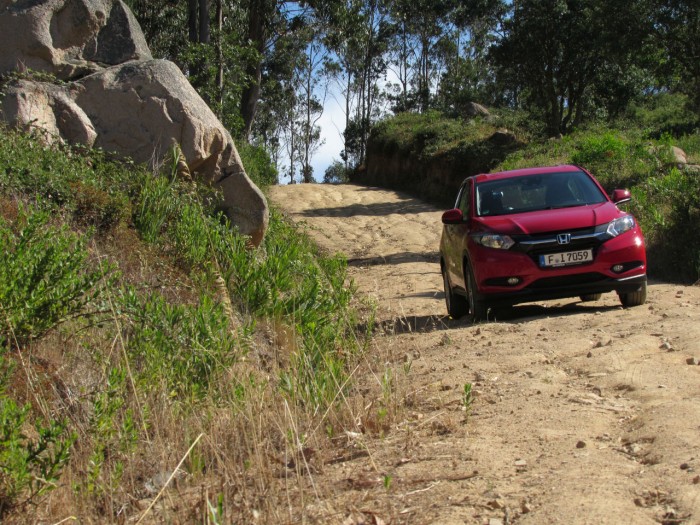 Accelerating beyond 100 kmh on a reasonable incline was extremely difficult, with the engine thrashing louder with every inch of added pedal and subsequent kick down.

The petrol shines an unfavourable spotlight on what I think would be a very nice transmission. The diesel mated with the CVT would make for a very competent machine indeed, but thankfully the manual does it no disservice with a lovely well weighted shift action and good spacing between gears. Once again, a shame about the stubby uncomfortable shifter.

HR-V is a competent drive with confidence inspiring stability, a comfortable ride and well weighted steering. 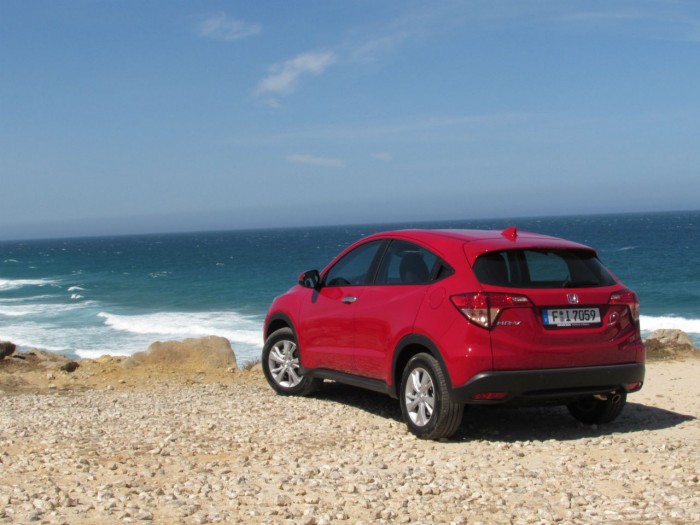 The HR-V range is leaner than most with 12 real spec/engine/transmission combinations.

City brake traverses the range as standard from the £17,995 S up to the Diesel EX at £24,945: fully loaded with the intelligent limiter and lane departure warning.

Our choice, and what we think will be most popular is the SE Navi Diesel: a rung below top level at just over £22,000. The rear view camera and panoramic roof are lost but we could live without the gimmicks, and it cuts the rival Qashqai price range right down the middle. 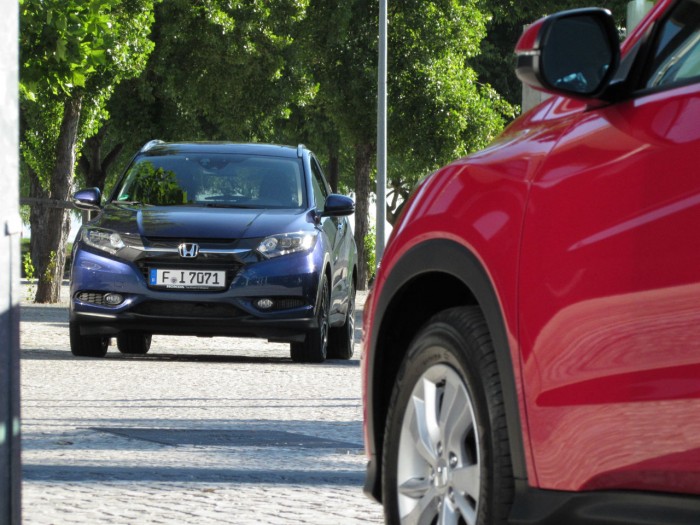 Conclusive thoughts on the new Honda HR-V then.

It’s a strong looker to the right eyes, it has practical credentials to knock most rivals out of the park and the Diesel (the one to buy) gets a solid 60+mpg in the real world.

The HR-V is a good car. So why am I worried for it?

It’s that bold “Oi, you!” Honda decided to throw at the Nissan Qashqai, which is also a very good car. It also dominates this segment and makes the HR-Vs range look somewhat sparse.

It was a deliberate move on Hondas part with the HR-V coming well equipped from standard, but it has a “niche” “alternative” vibe to it, whereas Honda are gunning for a smash hit.

For the most part they and HR-V do deserve it. Time will tell. 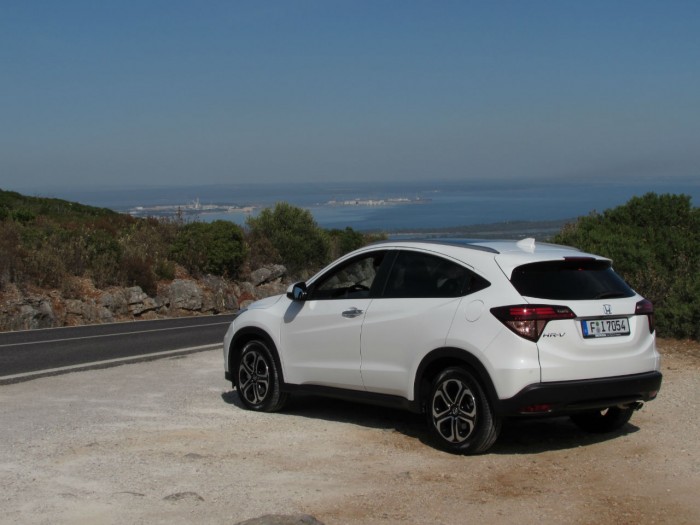