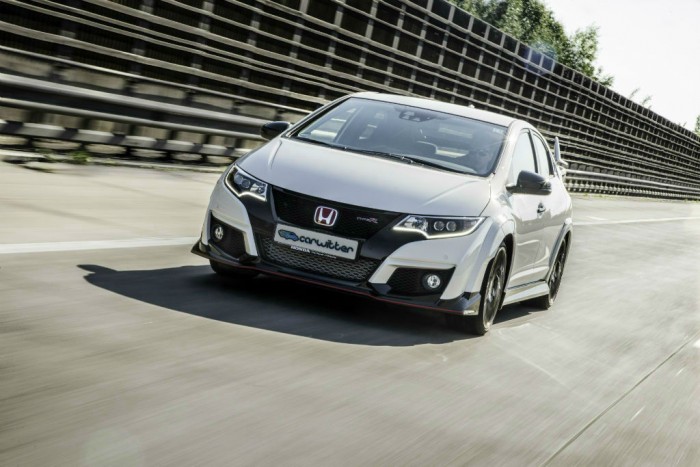 Honda’s Civic Type R has a cult like following. Across many forums, car parks, and clubs throughout the land, arguments are born over the EP3’s legendary acceleration and handling.

Much like the 205 GTi, the fabled EP3 Civic Type R is the one that Honda have been looking to bottle the essence of since its success some 14 years ago.

The version that followed the EP3 became fat, bloated with little more power. Yes they were hot hatches but they didn’t have that light, go kart like handling of the bantamweight EP3.

It’s now 2015 and Honda are looking to make a comeback with the latest generation Type R.  Everyone has been made to wait patiently, as the previous model was culled 5 years ago in a bid to bring Honda’s brand emissions down. 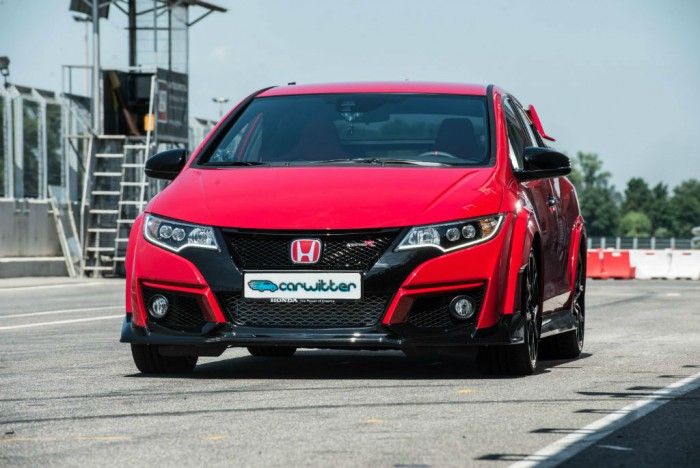 We headed to Slovakia to put this new kid on the block through its paces.

Starting at £29,995 you can see this is no bargain hot hatch anymore.

In fact the Civic has grown so much in size it now sits in the segment above that of the EP3.

In fact the ‘development car’ lapped the ‘ring in 7m 50.63s. Which has achieved what Honda initially set out to do – to build THE quickest front wheel drive car on the Nordschleife. 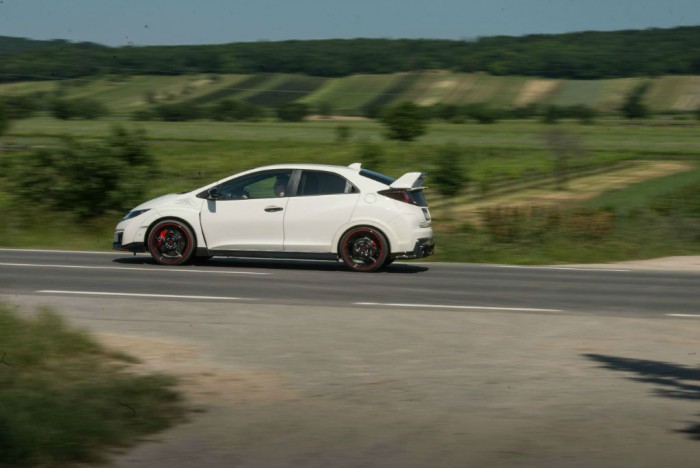 Even with the rear doors seemingly hidden by the lack of initially invisible handles, it cannot escape the fact that this is a big car.

Bearing that in mind the flat slab sides give way to some rather beefy front and rear arches, not being wide enough already they are further outfitted with arch extenders to give this Type R an even wider appearance.

From some views it looks stunning, from others it looks a little awkward on occasion…I think this is what happens when you try to mix curves with angles. 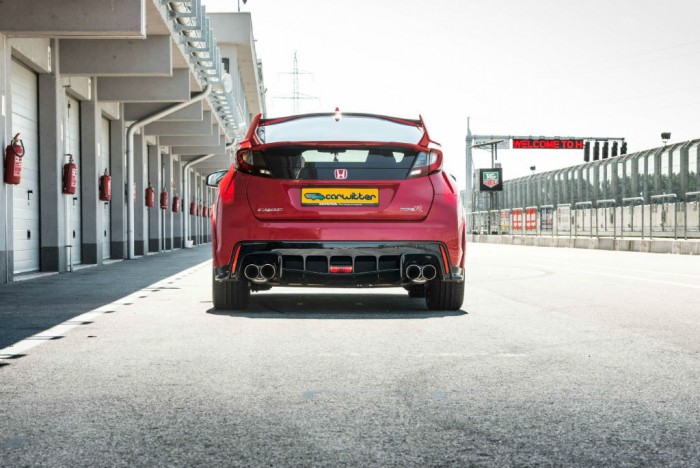 There are some awesome styling cues though; the deep rear splitter and quad exhaust pipes really give this Civic a mean looking behind.

The functional rear wing actually increases down force at higher speeds, without increasing drag; it also has some sticky out fins that mimic the line of the rear lamps, to aid airflow over the car.

Cut into the front wings are fully functional air vents, vertical ones sit just behind the front wheels too. This helps suck air through the engine bay and allows the Civic to have a smaller front grille arrangement.

Underneath you will find a nearly flat floor, everything that can be covered up is.

This creates negative lift, meaning at higher speeds the car is sucked onto the road, all that air is then fed through the rear diffuser. Proper racecar tech at work, in what Honda claim is a segment first. 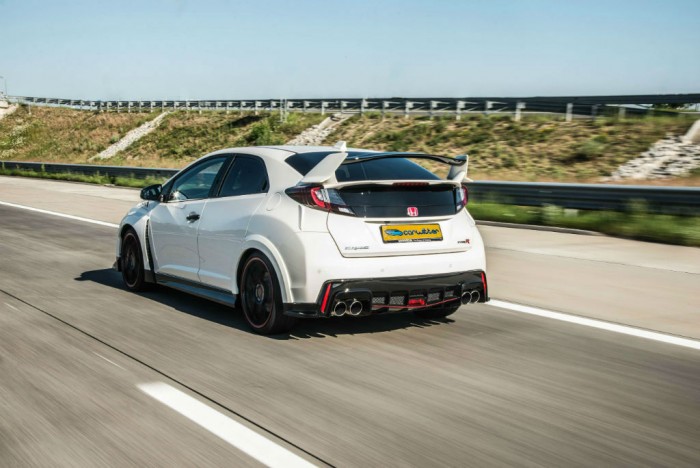 Pressing the large red Start button to your right the Type R burbles into life with a low rumble.

An interesting bit of information to point out is that to turbo this VTEC they have actually switched the normal cam setup. In this arrangement the high lift cam does the low revs, whilst the normal cam deals with the higher revs, with the aid of the turbo.

With this setup it completely negates the VTEC kick…”yo”. It drives just the same as a turbo car. Give the throttle an elongated stab and you hear a nice whooshing sound as you let off. It gets quite addictive.

Press +R and the dampers stiffen by 30%; throttle mapping is altered, as well as various other systems. Noticeably the revs sit ever so slightly higher and acceleration pick up is fractionally quicker, but you really have to pay attention to notice those changes. 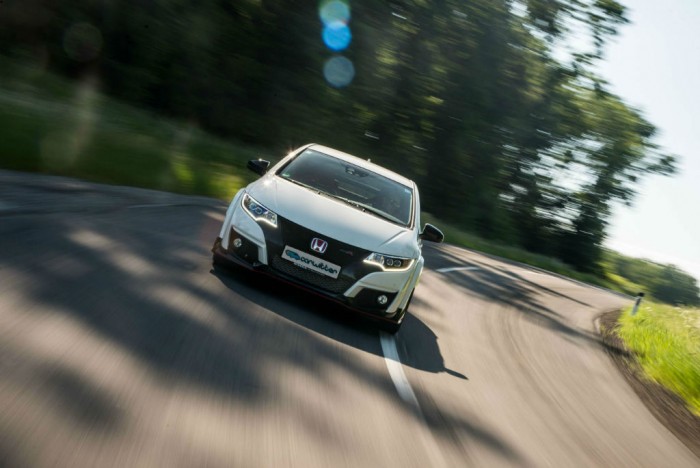 Power delivery can be a little tame to start with as you run without the turbo up until about 2,500 RPM. After that you get a nice progressive power band, it just keeps on pulling…we bottled out at around 142 MPH, but even at that speed the Civic was completely stable and felt rock solid.

Taking it through some twisty mountain roads we were pushing hard. Into the first turn the car felt as though it was going to push wide, so I slow.

Feeling braver on the next one I leave off the brakes, balance the throttle and just turn in. Beneath the dash you hear a whirring as the diff spins up, accelerating out of the corner you can feel the outer wheel grip and pull you round, the first few times you do it feels quite surreal.

You come out of the other side thinking

how have I gone into that corner, at that speed and made it out the other side without horrendous under steer spitting me across the other side of the road?! 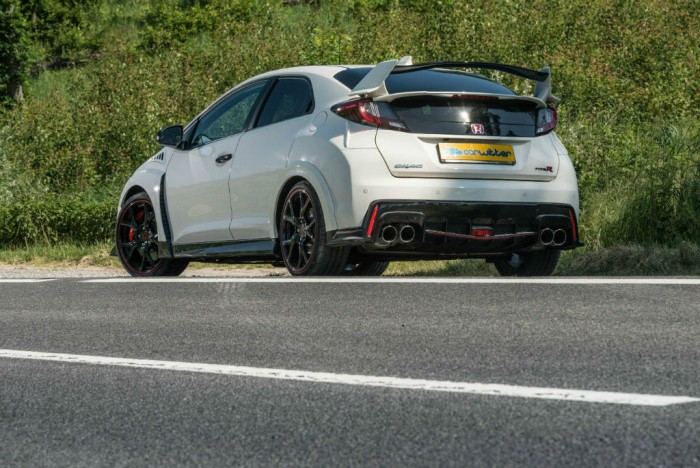 Don’t get me wrong, push hard enough past the cars limit and it will eventually wash wide albeit gradually. But in a car this size, with only front wheel drive it feels very unnatural. In a Golf R you would expect nothing less, but in this…wow.

Steering is well balanced and allows you to place the car on the road very accurately. The only time we really felt much feedback was hammering it into a corner too fast on track, apart from that you are left devoid of any real road feel. 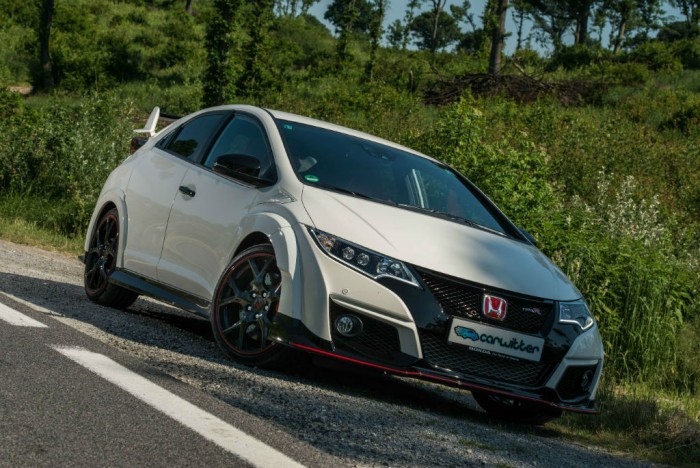 After saying that the Civic is a big car, it really doesn’t handle like one. 4.5 KG’s have been shed by using bonding on the chassis rather than the traditional spot welding.

When we pushed the Honda techs harder to see what further weight reduction work had been undertaken, they had words in Japanese and then very little more was said in English about it!

But they have nothing to be ashamed of, it handles very neutrally. There is no massive weight transfer that can be felt, the front corners don’t load up and dig in when attacking a bend, shooting out of an apex on track the whole car just feels planted. 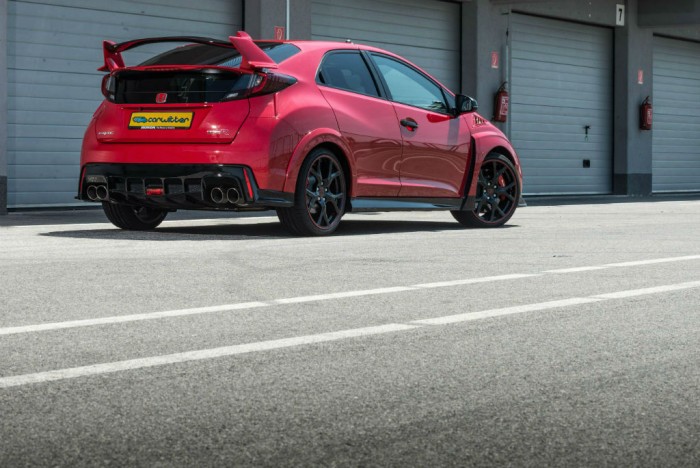 No doubt this is due to the trick active dampers, they contain a solenoid which opens and closes the hole that lets the oil through. They are basically the same setup as the active rear dampers on the Civic Tourer we reviewed last year.

Whilst on track, lap after lap the 4 pot Brembos held up just fine. Even with Matt Neal and Gordon Shedden at the wheel all day long they did the job perfectly well.

Opening the door for the first time you are met with the rather fabulous looking red and black Type R emblazoned seats. 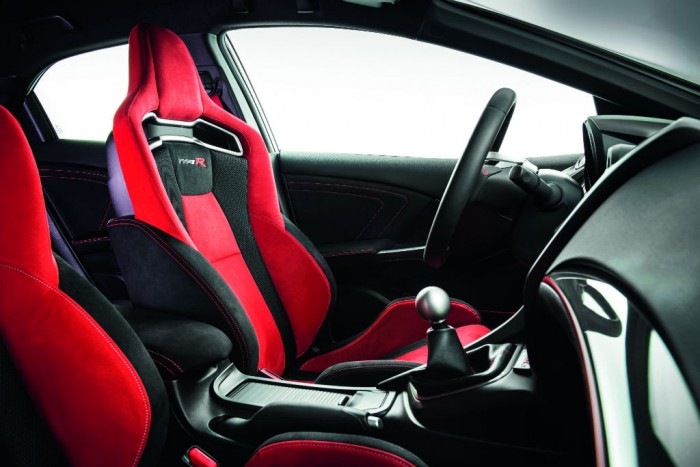 These are proper racing seats, you have to climb into them, they are firm, they are hugging. Spot on! 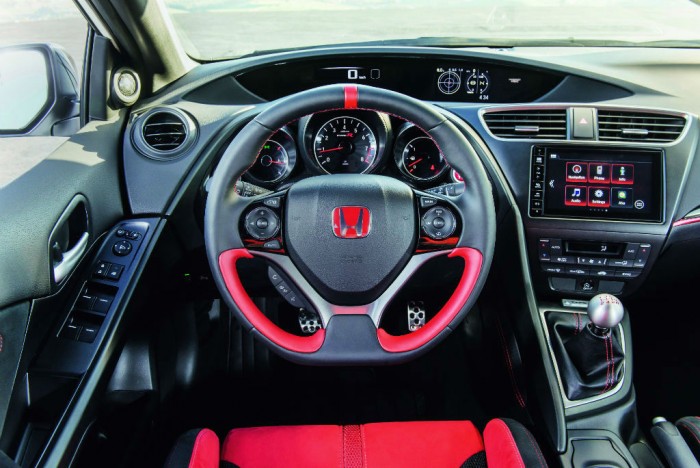 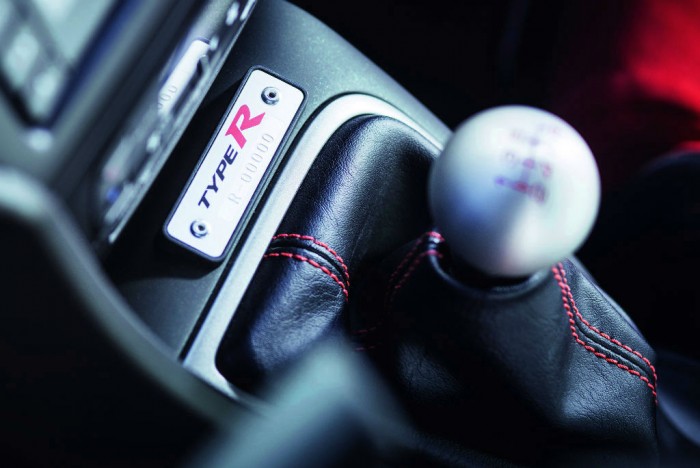 Next you notice the wheel, a leather-clad affair the lower quarters have a red insert…a little bit tacky but the 12 o’clock stripe is a nice touch. Alcantara would’ve been much more pleasing though.

Apart from a svelte aluminium gear knob, a numbered plaque and black headlining the interior is standard Civic. 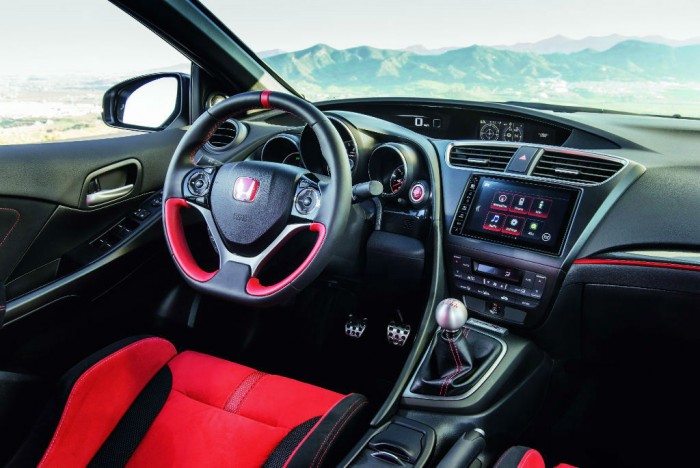 You get the same split-level, slightly disjointed set up as with every Civic. The most annoying part is the infotainment display, changing from one menu to another or messing about with the trip computer takes forever and isn’t at all intuitive.

Some functions just can’t be changed via the wheel controls, it’s quirky but I’m sure you would get used to it. 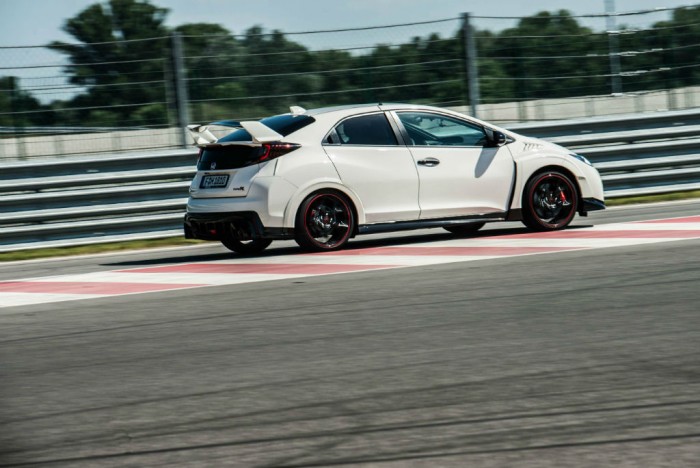 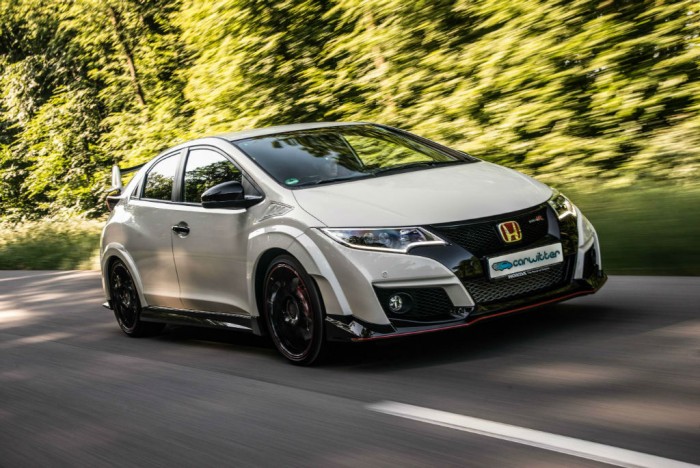 The new Civic Type R is pretty astonishing, it has such a well-honed chassis and when combined with that strong, turbo power plant it really is light years ahead of the previous generation.

Handling wise it is easily up there with the likes of the Golf R, yes you forgo the all wheel drive and at this price that is quite a downfall.

Pitting it against the ageing Megane 275 and things would be pretty close – that also comes with a wonderful front diff and handles ever so well.

Choosing between the two…we would have to opt for the Type R I’m afraid, but…with £30k to splash on a C segment hot hatch, the Golf R trumps the lot. 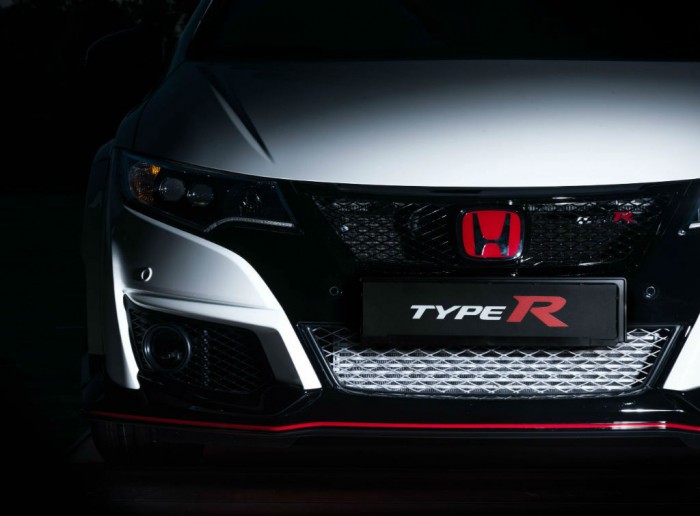 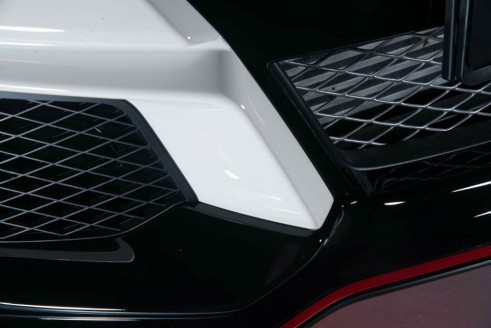 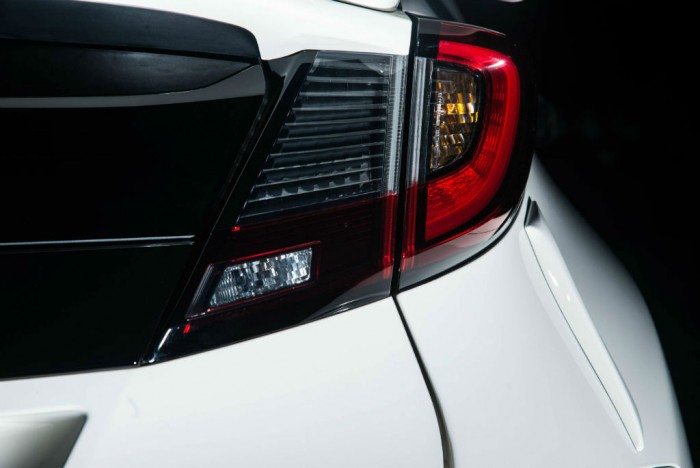 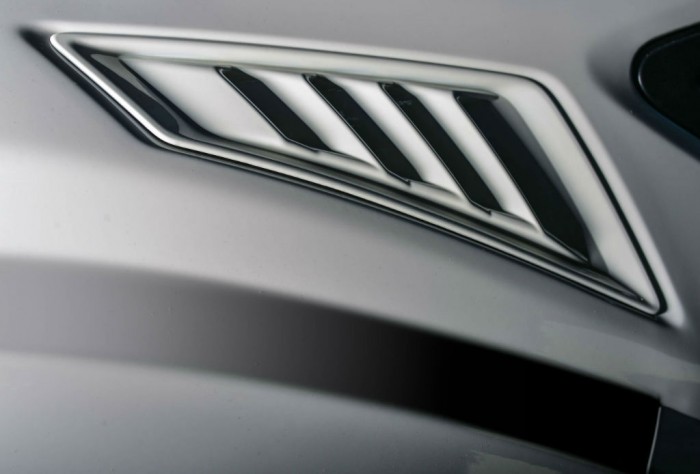 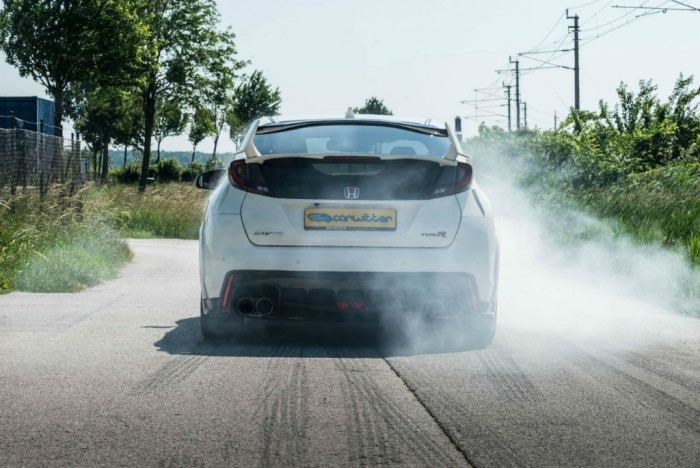