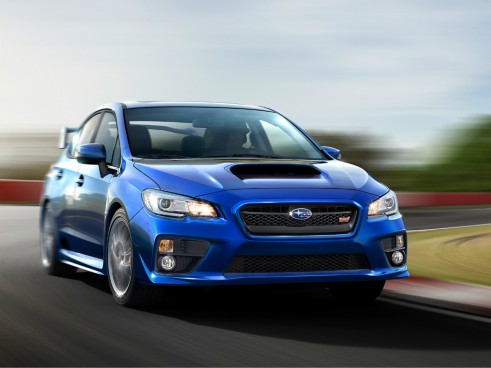 In a move that will thrill anyone who grew up idolizing Colin McRae, Subaru have announced that the new Subaru Impreza WRX STI will make it to Britain.

Priced at £28,995, £4,000 less than it’s hardly lamented predecessor, Subaru revealed at the Detroit motorshow that the STI will hit our showrooms in May.

Sticking with the legendary 2.5 litre “boxer” four-cylinder engine at the heart of all Imprezas, the 2014 STI will produce 305hp and 290lb/ft of torque, and Subaru claim the reworked gearbox will provide a slicker shift than ever before.

The standard all-wheel-drive system has been tinkered to ease the ride through town and Subaru promise more direct response from a new power-steering system.

Outside the angular Impreza shelves the unpopular hatchback that nearly ended it’s production, returning to a familiar five-seated saloon shape and will sell as a single, four-door, model.

At the back the signature huge rear spoiler returns above two sets of dual exhaust pipes, set into an aggressive rear diffuser.

Exterior dimensions remain the same, but more space is created inside the cabin by extending the wheelbase, shod with 18 inch alloys, by 25mm.

Subaru have not released full specs for the Impreza but promise UK drivers “comprehensive” standard kit.

While no numbers have been announced Subaru confirmed that the sale will be in “limited numbers” so potential buyers will have to hurry before they’re all gone.

BTCC fan? Fancy owning a stake in a team? Read on.