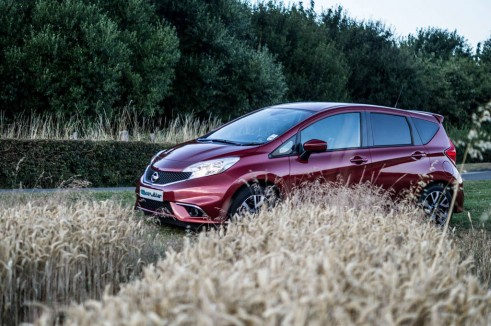 Nissan’s family hatch the Note is now in its second generation, now fitted with the Qashqai’s impressive 1.2 litre engine (but now in supercharged S form) we had to see how it stacks up compared to our class favourite the Honda Civic.

We tested a top spec Tekna model with the 1.2 litre 3 cylinder supercharged engine, this produces 96 BHP which will get the Note to 60 in 11.3 seconds. Ours was fitted with the optional Style Pack, this gives the Note meaner looks with sportier front and rear bumpers along with deeper side skirts – an extra £800. 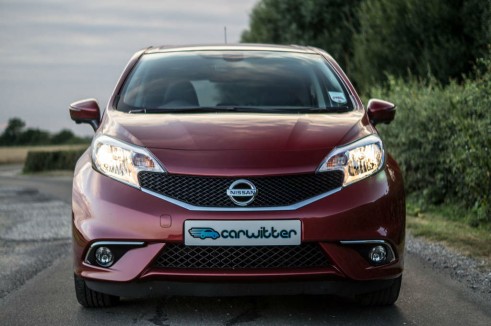 This second gen Note is a vast improvement over the old model, whilst it retains a similar profile the whole look is much more sculptured. It gives the Note a more masculine look, especially when paired with the Style Pack.

Our car was finished in probably the least flattering colour in the palette, but it still looks good on the road. 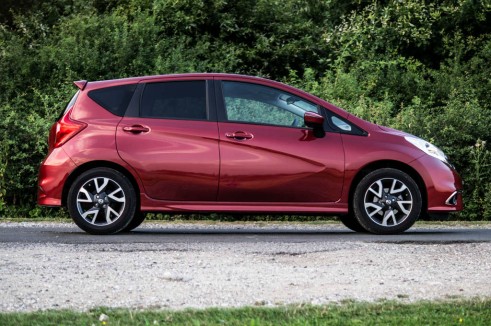 Nissan’s new little 1.2 3 cylinder power plant does a very good job to keep the Note ambling along at a decent pace. You will never set the world alight but around town it can really be quite nippy.

As in the Qashqai we found this urgency dies off at higher speed, you have to work the gears if you want to overtake at motorway speed. 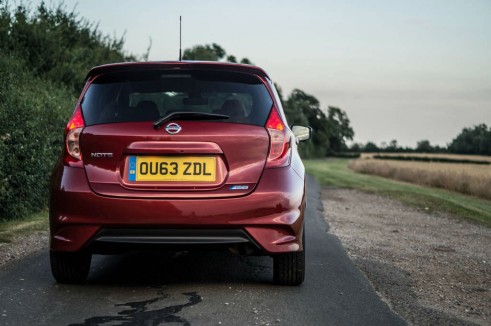 Steering is surprisingly accurate, the whole car feels pretty nimble through twisty B roads. At higher speed the steering does weight up quite a lot though, this makes it seem a little dead of center which is a shame.

Over bumpier roads the ride can get a little bouncy, it’s very well damped for around town and shimmies over imperfections nicely…but find an undulating section of road and you find a little bit too much rebound.

Over long distances the Note will make for a great companion, clocking up over 300 miles we managed 50.5 MPG. Nissan claims the Urban MPG is 54.3 and we came damn close over a mixture of driving conditions.

For the majority of the time we left ECO mode switched on, this is a large green button found on the dash that limits the amount of acceleration and immediacy. If you need extra oomph you can push the pedal fully to the floor which temporarily disengages ECO mode and gives you all the horses. 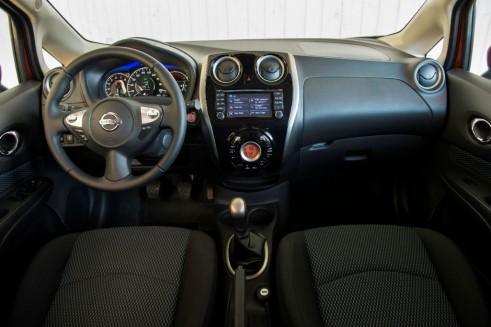 Inside the Note you find a smartly laid out dash that is a cross between the Juke and Qashqai. A circular lower display is surrounded by all your climate controls, whilst the upper half has a nice large infotainment screen.

With this being the top of the range Tekna model all basics are catered for, Aux and USB in can be found in the upper glovebox on the passenger to keep everything nicely out of the way. 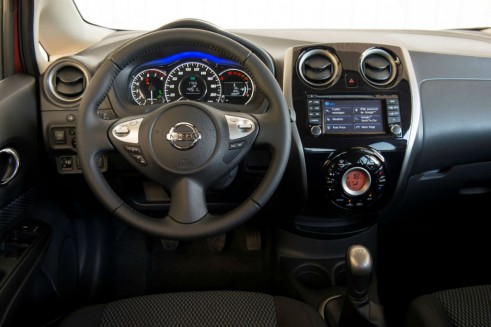 One thing we particularly liked were the dials, large and lit up with a very crispy white light. They can also be dimmed along with the infotainment screen at the touch of a button on the center console.

Now the Note isn’t exactly a big car to try and park but the Tekna has Nissans safety shield system built in, so it has cameras front and rear which help give you a 360 degree – drone like – view of your surroundings whilst manoeuvring.

A part of that system that seemed overly paranoid was the lane keeping aid, even if we physically turned the wheel to change lane it would beep at us…it gets very annoying over the course of a few hundred miles!

Plastics inside are reasonable quality, the upper sections of the doors look worse than they are in the flesh. But overall you get the feeling that this car was built to be hard wearing and long lasting, we can’t knock it for that.

Rear legroom is exceptionally good, you will have tons of room with an average sized driver up front. 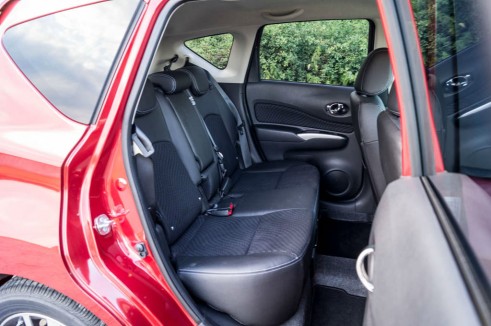 If however you need more boot space you can slide the rear bench forward to give you an extra 86 litres – a grand total of 411 litres in all. 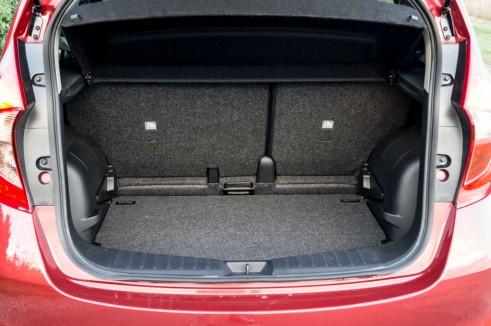 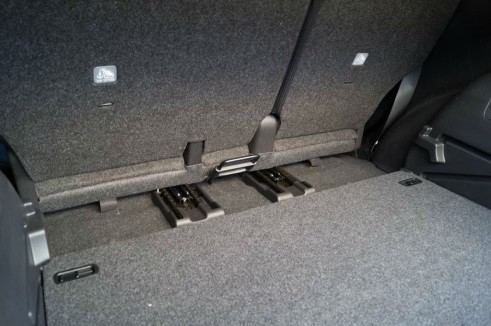 If you need yet more space then the seats fold down to give a huge 2,012 litres.

A great feature to mention is that the rear doors open to a full 90 degrees making it dead easy to load children, shopping or…anything into the rear of the Note. 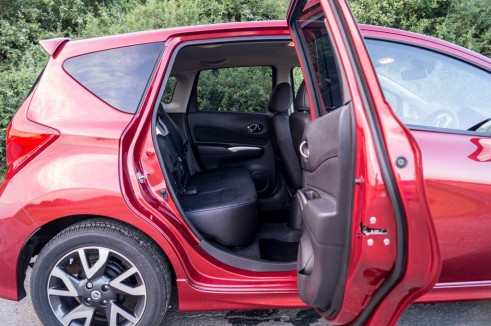 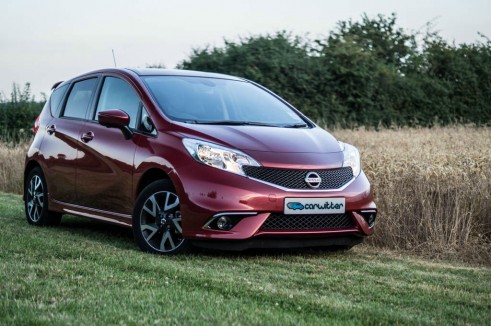 In terms of boot space and rear seat leg room you would be hard pushed to find a better family hatch. The 1.2 DiG-S engine is powerful enough but it might be best to opt for the quicker 1.5 litre dCi diesel for some added performance.

Compared to the Civic…well we would have to go for our old favourite there. As great as the Note is the Civic seems to handle better and all round we prefer it. 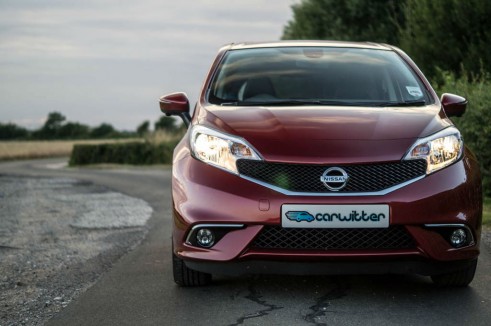 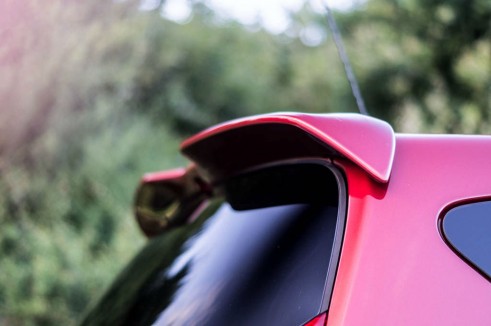 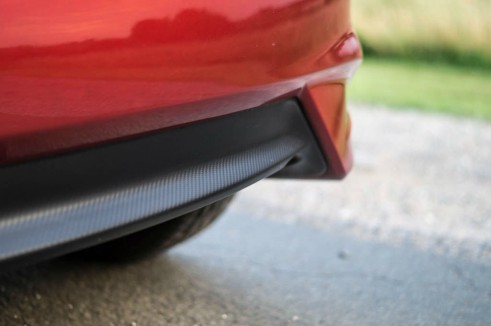 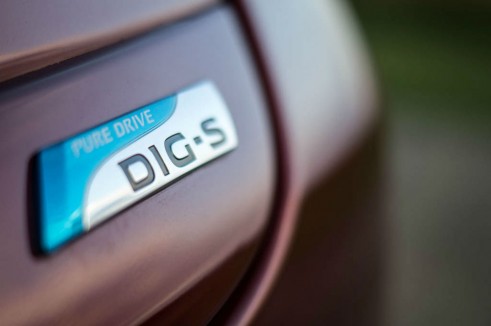 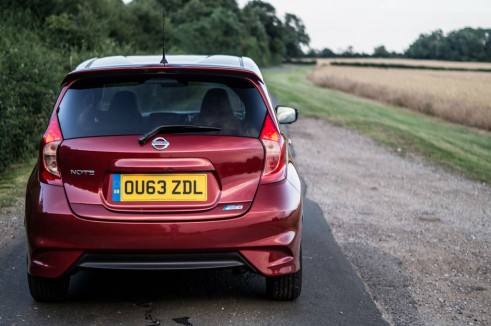