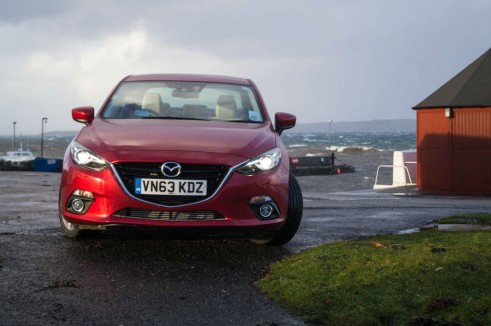 Starting at £19,895 ours was kitted up with £1,200 of cream/black leather interior, Blue Reflex Mica paint £530 and the £700 safety pack (Rear Vehicle Monitoring, Lane Departure Warning System and High Beam Control) bringing the total to £22,325. 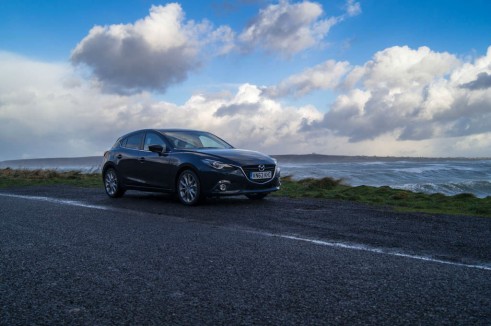 As soon as your eyes fall upon the Mazda 3 you notice its low slung curvy lines, it looks very much like the Infiniti QX70 – just squashed and shrunken into hatchback form.

A flat, blunt nose gently curves up into the bonnet, headlights pinch in toward a small floating front grille. Styling lines mark the front and rear wings, meeting halfway up the car, whilst toward the back a protruding boot lid gives it an almost shooting brake look.

For me the best view is from the rear, the Mazda 3 has a low, hunkered down appearance, it looks almost squashed with its thin stretched rear lights. 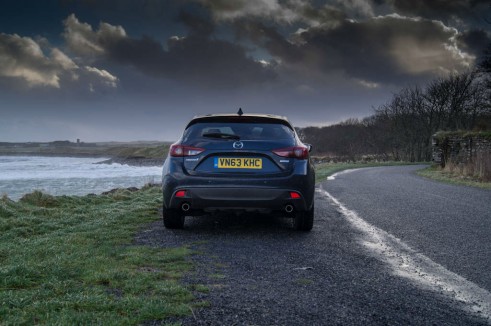 Don’t let the headline 2.0 litre engine put you off the Mazda 3, as with the 6 they have worked extraordinarily hard to make their engines as efficient and clean as possible. Just because it’s a 2.0 litre lump doesn’t mean it will cost you a fortune to run, this little Mazda only emits 119g/km of CO2, that’s only 5g off of a puny 1.0 litre Ecoboost Ford Focus, impressive!

With only 118 BHP it isn’t particularly nippy in a car weighing 1355 KG. Work it hard enough letting the revs really climb and it will get motoring, but to me it seemed a little lethargic and breathless. However Urban MPG is quoted at 43.5.

Thankfully if you opt for the 163 BHP ‘High Power’ 2.0 litre Petrol this improves vastly, you still need to knock it down a gear for overtakes, but it picks up far quicker than the 118 BHP model. If you want yet more zest then go for the 2.2 Diesel with 148 BHP, this model packs 380 Nm of Torque. Overtaking is a breeze and it has a great mid-range to it – as well as achieving 57.6 MPG (Urban). 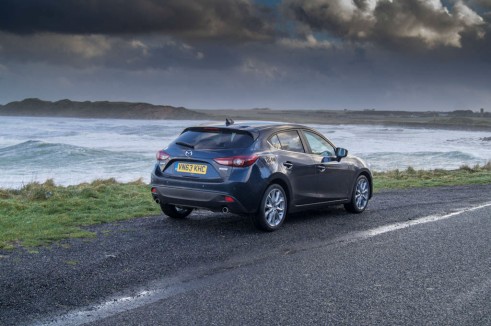 Thanks to Mazda’s Skyactiv initiative (first seen in the 6) they are becoming masters of creating agile handling cars. 60% of the Mazda 3’s bodyshell is made from high-tensile and ultra-high tensile steel, giving the 3 a 31% increase in rigidity over the outgoing model.

Through corners you are greeted with great grip upon turn in, even when travelling a little more briskly than you should be. In wet conditions it fairs equally well, when you do get a loss of grip you can easily correct the car and catch it before the stability control kicks in, everything about the 3’s handling is predictable and can be learnt relatively quickly.

Braking had a great feel to it too, very instantaneous and precise right to the floor. 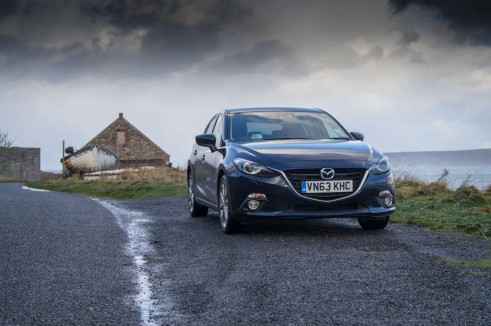 One thing to note though is the road noise, we tested each model with the 18” ‘Sport’ alloys. Having a conversation in the car over most road surfaces you find yourself raising your voice. This only disappears on the most perfectly preened tarmac, so opting for smaller alloys with chunkier tyres may be something to think about. 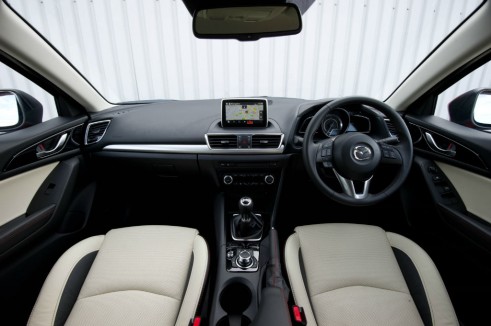 Inside the Mazda 3 is very smart. A minimal layout keeps things simple, in fact it’s quite Germanic in its blandness. Gloss black trim flows across the centre console and onto the door handle surrounds, it also covers a section of the centre console. Quality up top is very good, things get a little worse toward the lower sections where scratchy, harder plastic can be found but its not a deal breaker. 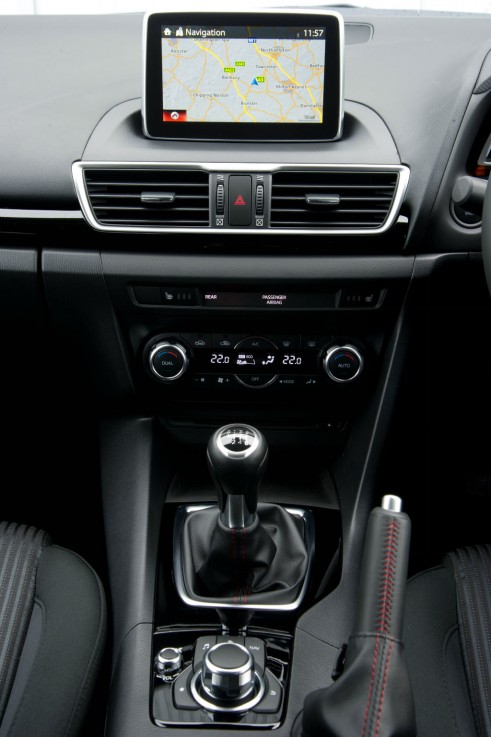 Mazda’s new 7” ‘Connect’ touch screen system is a vast improvement over the cramped 5” screen found in the Mazda 6. Menus are far clearer, easier to read and well laid out. All of the cars functions are accessible through this interface, as well as providing you with a central joystick the screen is also touch sensitive for ease of use.

You can also link your phone via one of two apps, this gives you access to online streaming radio as well as the ability to have texts, emails, Facebook updates and Tweets read back to you – the last two are a little gimmicky! 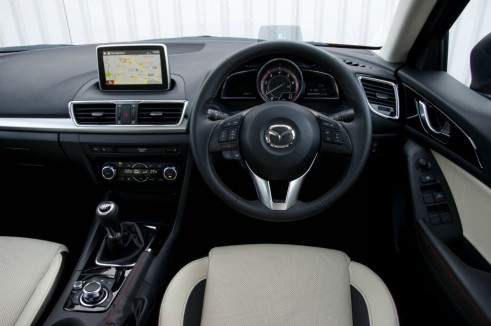 A first for Mazda is its new heads up display, a little less flash than the Peugeot/Citroen jobs this one just sits on top of the dial binnacle, rather than fully hiding inside the dash when not in use. It’s a nice function to have, allowing you to see your speed and sat nav directions without taking your eyes off the road. In fact I don’t think I once looked at the dials whilst using the system.

Rear legroom is good and even though the 3 has a sweeping roofline headroom is also rather decent, however the boot is a little on the small side compared to its rivals at 364 litres. 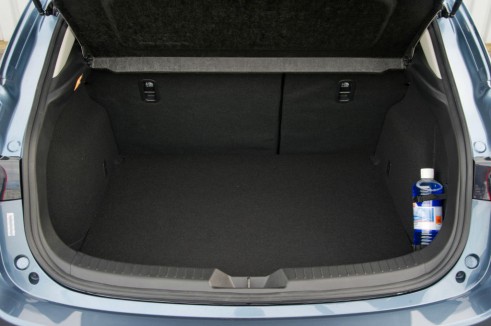 The new Mazda 3 is a big step up from the outgoing model, both in design and build quality. Inside looks rather upmarket if a little bland, the whole car feels solid and well built. Great handling makes it entertaining enough as a driver’s car – as long as you combine it with the right engine! 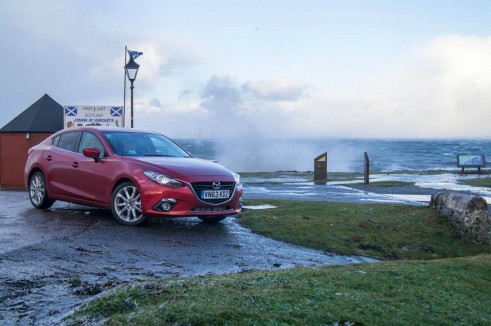 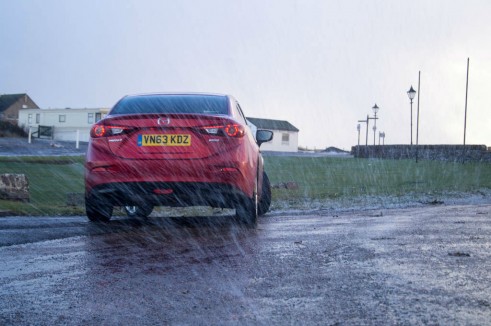 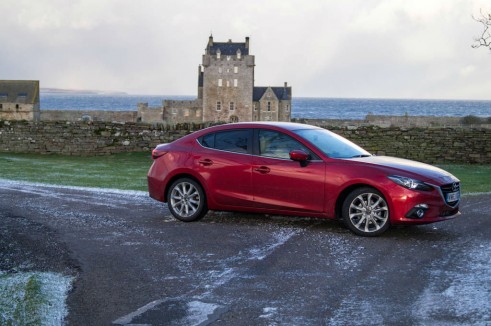 BMW i8 Pictures – In The Flesh