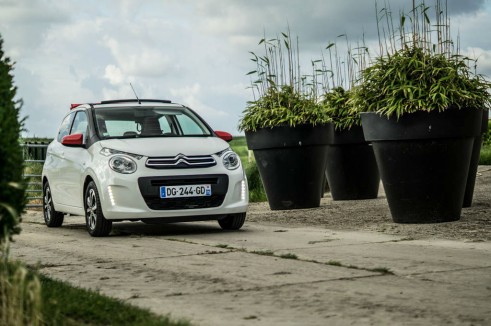 Personally I was never fan of the original C1/107/Aygo trio, they looked too similar and were all equally as bad as each other. Painfully slow, cheapo interiors and a price that was two grand above what they should’ve been!

After a few too many years on the showroom floor all three have been killed off and it’s all change for 2014. Yes they are still the same car underneath, but they stand out a lot more and actually look vastly different to each other.

In top of the range Flair trim, with the Airscape folding roof, this little car comes in at a rather hefty £11,785. The gutsier VTi 82 is only available on the top of the range model, which is a massive shame. 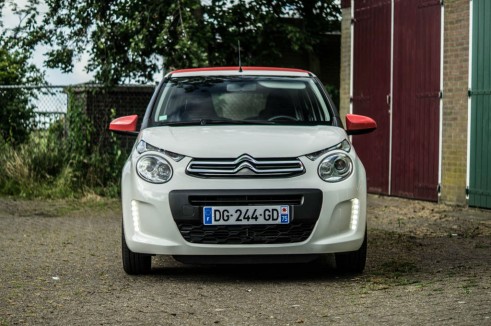 All through the press conference we were told how cute and excitable the new C1 looks…for me though it just looks mean and angry. But in a good way!

The squashed upper lights are meant to mimic eyebrows whilst the larger circular main headlights are ‘eyes’. But on the whole it just looks a lot more manly and beefier than its predecessor. It has more road presence, especially when combined with its wider stance. 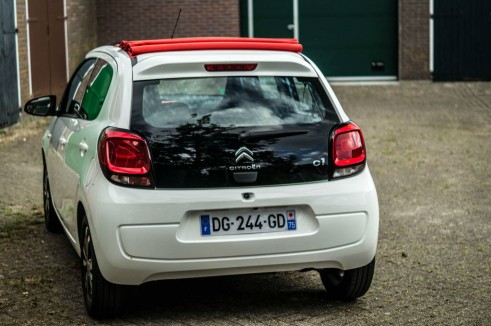 At the back you find some DS3 inspired, squared off 3D rear lights and a smart black glass tailgate.

The only criticism we have of the whole design is the manual boot release that is nastily placed in the rear bumper just above the number plate…how much would it have cost to make this an electric micro switch built into the handle?! 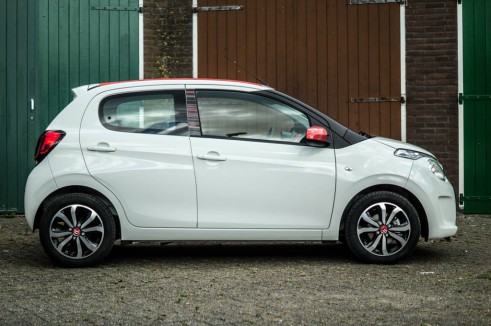 The little 1.2 VTi 3 cylinder engine has a nice thrummy quality about it, it revs freely and picks up pace well. You have to work the gears to get the best out of it, but around town and even on motorways it keeps up well with the pace of things.

Comparing this to the older C1, fitted with the sluggish 1.0 litre VTi engine that only produced 67 BHP the difference is like night and day! The 80 BHP unit just feels more lively and energetic, it gets you up to speed far quicker and accelerates better when in gear. 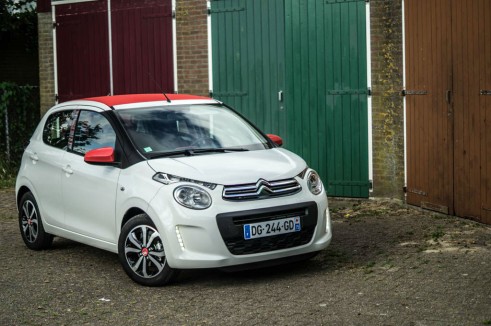 Handling at low speeds is great, a tight turning circle of 4.8 metres means it’s easy to manoeuvre and park…although for the less spatially aware you can opt for a rear parking camera.

The little C1 rides comfortably over lumps and bumps, but that rather soft setup gives it some nasty body roll through corners at higher speed, some stiffer damping would have helped here.

One thing we did notice is how shaky the car was at low speed, even when in neutral you can feel the engine sending vibrations through the chassis. Things didn’t improve too much once in gear either, the little C1 whines and moans until it gets to around 25 MPH. 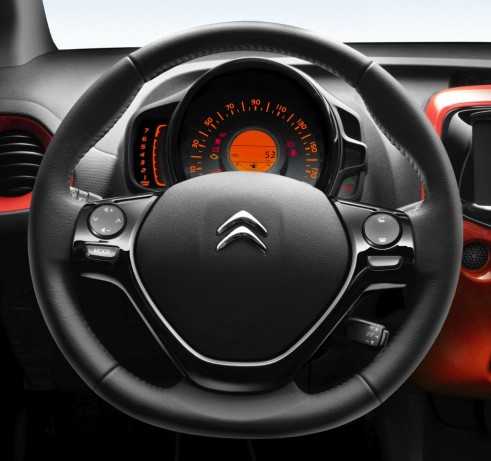 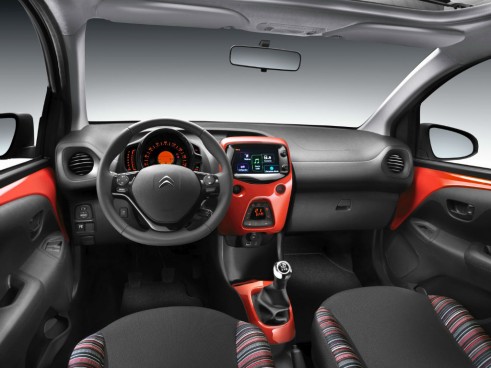 Inside the C1 you find a nice 7” touchscreen mounted in the dashboard, these are standard on all but the very basic Touch trim level.

It features a very cool system called Mirror Link, it’s a technology we used last year; but in a Hyundai. It pretty much does what it says on the tin…it mirrors your phone on the larger 7” infotainment screen. This means all your music, apps and even Sat Nav can be used in your car.

Citroen don’t even offer a Sat Nav as an optional extra because of this technology. We used it on our test drive and it worked perfectly. Plug your phone into the car, press a few on screen prompts and you’re away! 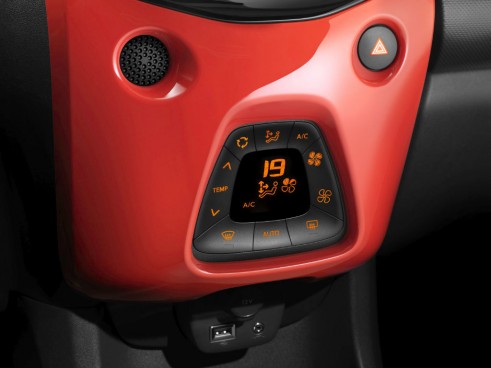 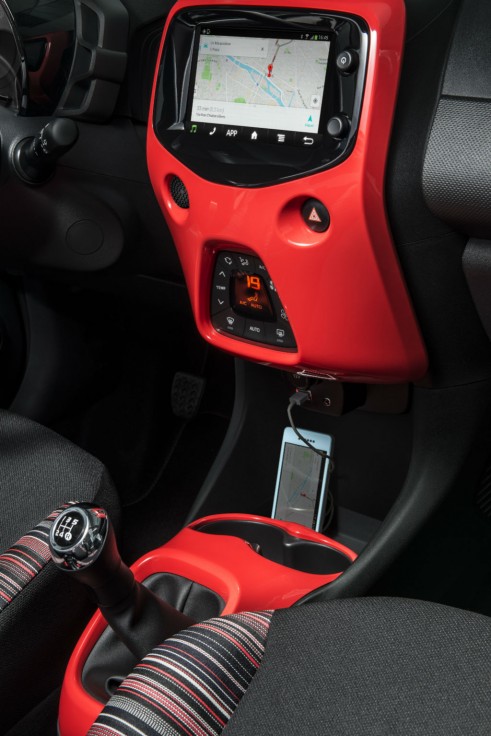 With regard to the centre console design it’s pretty funky, but again looks a little angry toward the lower half…as if it was based on a Cyberman from Dr Who.

One thing we loved is the modernity of the dials, simply laid out with a monochrome red and black theme you now get a rev gauge as standard! To help your eco driving credentials you also get a ‘shift’ light. 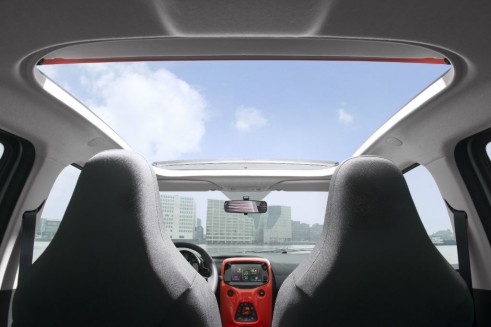 For people that want the fun of a convertible without the cost, the Airscape roof offers a best of both worlds, folding backward and forward at even motorway speed it’s a nice feature. Obviously with a fabric roof you trade off some refinement, but the wind noise really isn’t that bad when the roof is closed. 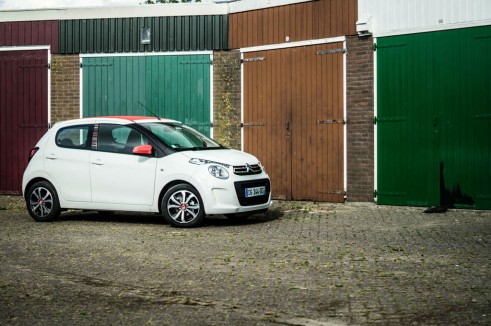 Rear leg room in the 5 door is…well, bijou to say the least. Your knees will be in the back of the seat if you are approaching average height, the back seats are best thought of for ‘occasional use’ only.

Boot space is also pretty tiny at 196 litres, but enough for a few bags of shopping. 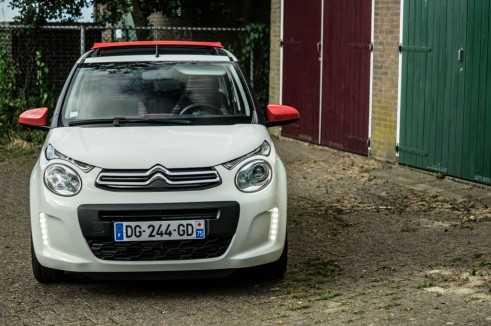 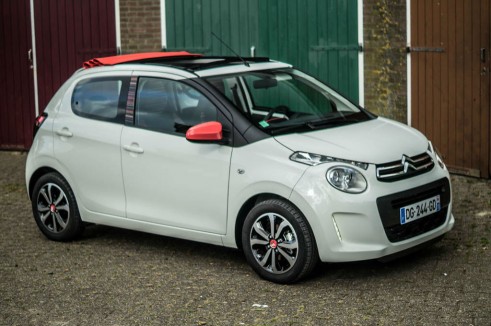 Citroen have turned around what – for us – was a truly awful car. The original C1 was everything we hated about small, cheap cars, this new model changes everything.

It looks great, has some very up to date tech and performs better than its younger brother could ever dream of! It certainly makes the Mii/Citigo/UP! trio look a tad bland and boring…even if they are a little more refined.

Our choice has to be the 80 BHP 1.2 litre engine, don’t go for anything less or you will be found left wanting in terms of pace. Unfortunately this means forking out for a top spec model… 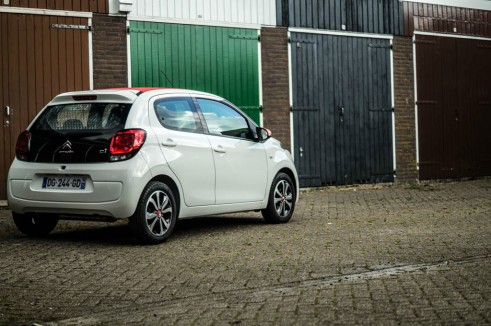 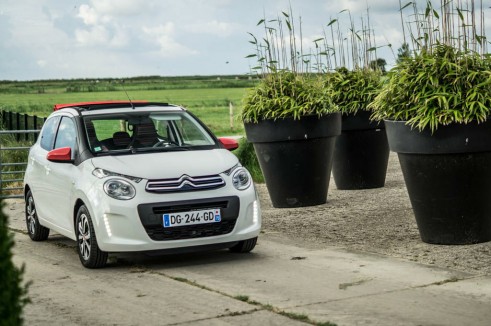 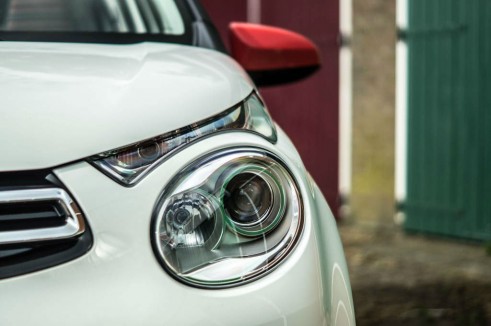 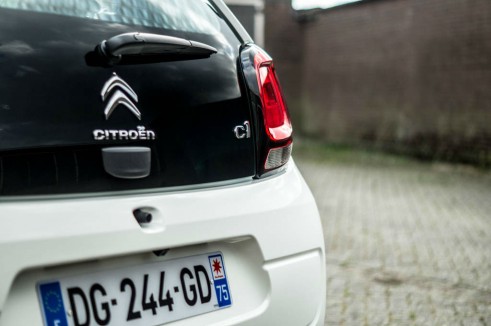