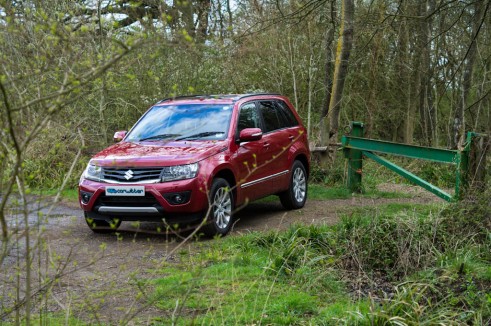 Suzuki have been making the Vitara since the late 80’s, always being positioned as an affordable fully 4WD capable vehicle. We have tested the latest version, the Grand Vitara. With a 1.9 DDiS Diesel engine, pushing out 129 BHP and 300Nm of torque, the 1.6 ton 4×4 will get to 62 in 13.2 seconds.

The model we tested was in top SZ5 spec with metallic “Phoenix Red” paint and parking sensors, together adding an extra £750 to the list price. At £24,624 our car sat about £100 above a poverty spec 4WD Land Rover Freelander 2. 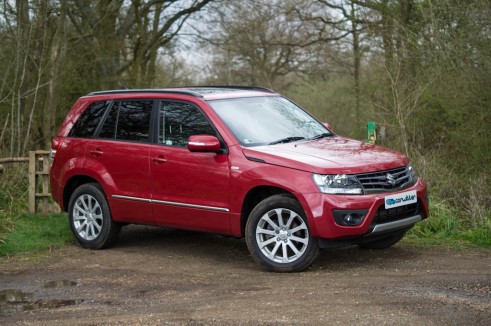 Suzuki has stuck with this current body design since its launch in 2005, meaning that yes, you are getting pretty much the same looks as an 05 plate model. However that’s not a bad thing, the car has a rather handsome, purposeful look to it, still looking as fresh as it did when it launched.

For 2013 Suzuki have revised the front bumper, grille and headlights adding HID’s along with revising the front fog lamp position. Another thing to be changed is the inclusion of a rear mounted spare wheel, a feature that was removed from the previous model revision. SZ5 trim features bigger 18” alloys, along with rear tinted glass; which helps set the car off nicely. 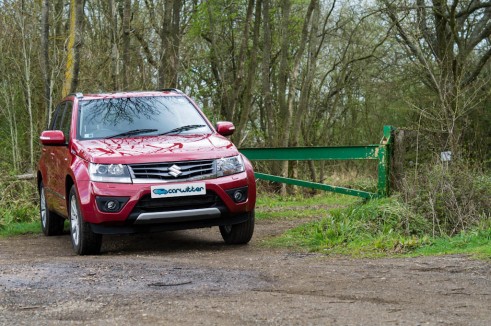 Now with a 0-60 time of 13.2 seconds you may think this car is underpowered, but it doesn’t feel so at all. The lower down gears will launch you to 40MPH very quickly, it’s once you start getting to the mid and top range gearing that things slow down. Luckily you rarely notice the top end sluggishness, due to the amount of torque the Grand Vitara has.

Over 210 miles with mainly city driving we only achieved 30 MPG, some way off the claimed 36.2 Urban figure that Suzuki quote. 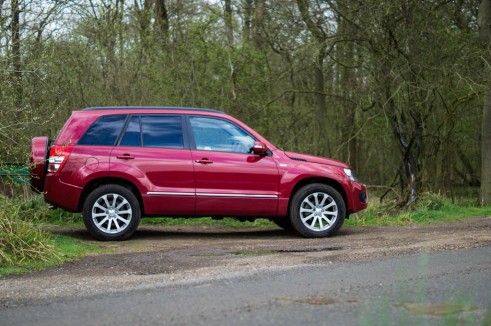 Off road performance cannot be faulted, there are 3 different modes to choose from 4H, 4H Lock and 4L. 4H is the normal all round driving mode, it splits power 47:53 ratio to the front and rear. 4h Lock is a high range mode, it locks the centre diff to ensure all 4 wheels are travelling at the same speed, giving best traction in deep snow or mud. 4L is a low range, this sets the final drive ration to 1.970 meaning it nearly halves the speed of each gear, this gives excellent low end traction. We tried out all the different modes over some mild off road terrain, the 4L setting was particularly impressive in deep sand.

We tried as hard as we could to get the wheels to slip and slide, but the Grand Vitara just gripped and got on with the job, even with the standard road tyres. On road the Suzuki was rather surprising, the ride is very firm for a 4×4. You will notice potholes and bumps, even with the chunky 225/60 Dunlop tyres. Strangely enough there is still a fair amount of body roll considering the stiff setup, although it’s only really noticeable through tighter turns. 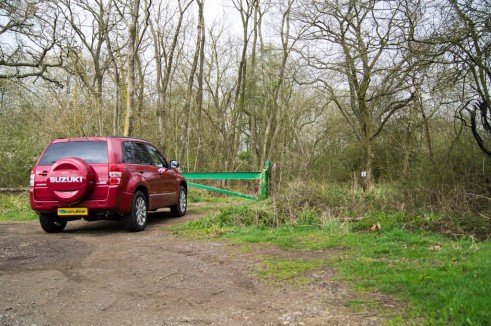 Steering is very direct and well balanced, due to it being hydraulic rather than electric. The Grand Vitara does feel very composed and car like when on main roads, toward higher speeds the lack of a 6th gear is more evident; as the revs climb engine noise is slightly more noticeable, but not intrusively so. All round disc brakes provide firm, accurate braking, both on and off road. Whilst gear changes can get a little lost at times due to the amount of room between the gears. Vibration is rather severe on the gear stick, it’s very prominent when sitting at junctions with the clutch in. 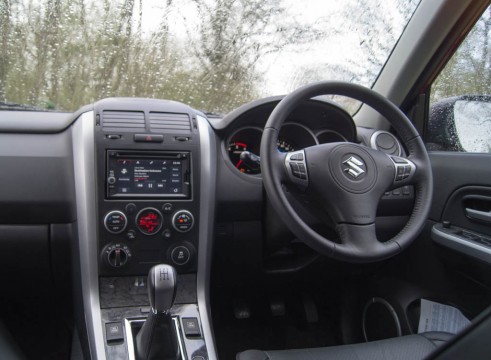 Inside the Grand Vitara things are functional, this is by no means a luxury vehicle. Simple, large buttons provide controls for the ESP and Air con, whilst the Bluetooth hands free and audio controls are mounted conveniently on the steering wheel. A strange grey wooden/marble effect trim surrounds the gaiter and door window switches, unfortunately this is standard fit. It looks a bit tacky and dated, some nice brushed aluminium would be so much nicer. 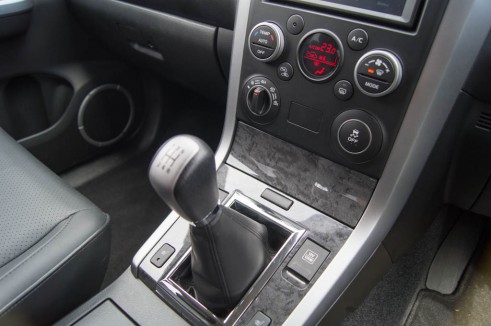 On the SZ5 trim level you get leather throughout as standard, heated front seats, auto air con, and cruise control. The best part though is the Garmin touch screen navigation system. Simple to use, clear buttons, and faultless iPod connectivity. Even though it isn’t a bespoke Suzuki unit, it is easily one of the best systems we have used. You can plug in all manner of connections, AUX Cable, USB, SD Card, iPod or Bluetooth streaming; leaving all bases covered, perfect! 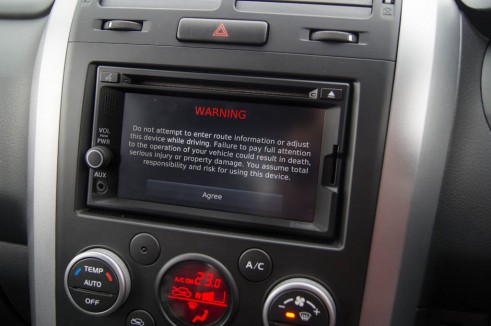 One thing that the owner should be able to disable though, is having to agree to the warning message that pops up whenever you start the car. It’s rather morbid to be warned about death every time you begin your journey! Some manufacturers don’t even have it at all, but pressing “Agree” before it will disappear is just annoying.

Sound as always with Suzuki’s was great, 5 speakers and 2 tweeters provided clear loud audio with nice bass levels. At the back there is plenty of leg room, the rear bench seats can also be tilted back slightly which is a good feature. A middle seat arm rest is a nice touch and adds to the comfort. 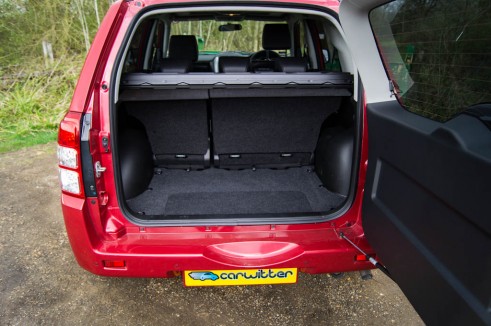 Open the large rear door and you find a boot with 398 litres, there is also a removable floor section to give you a little more space. With the rear seats fully folded the capacity nearly doubles to 758 litres. Large wheel arch covers eat into the boot space though, making larger items tricky to fit in length ways. 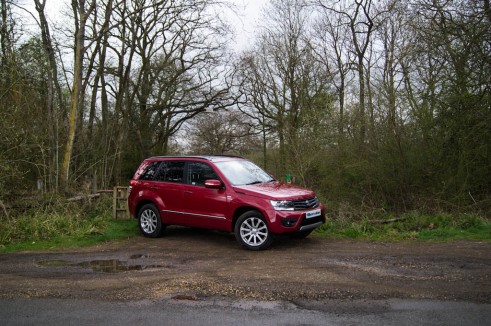 It may be getting a little long in the tooth, interior wise not a lot has changed since it launched 8 years ago. However if you can look past that, you will have a full time 4×4 machine, fully kitted out with today’s creature comforts. Suzuki’s Grand Vitara is excellent value for money!